It’s Sunday And We Are Going To Germany!

We planted a guard pumpkin in the kitchen, and if it hears noises, it goes off!

It was 51 degrees outside when we got up, I fired up the heater, and we brought the house to 72 in just a few minutes!  Good news! 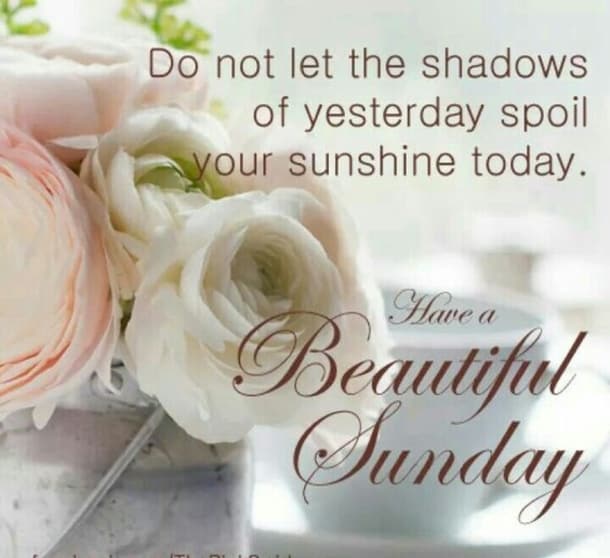 Mary tried on all of her Dirndl dresses, and all but two fit nicely (those two we bought when she was seventeen years old).

The dirndl is regarded as a folk costume (in German Tracht). It developed as the clothing of Alpine peasants between the 16th and 18th centuries. Today it is generally considered the traditional dress for women and girls in the Alps and has particular designs associated with different regions. The usual masculine tracht counterpart of the dirndl is Lederhosen. 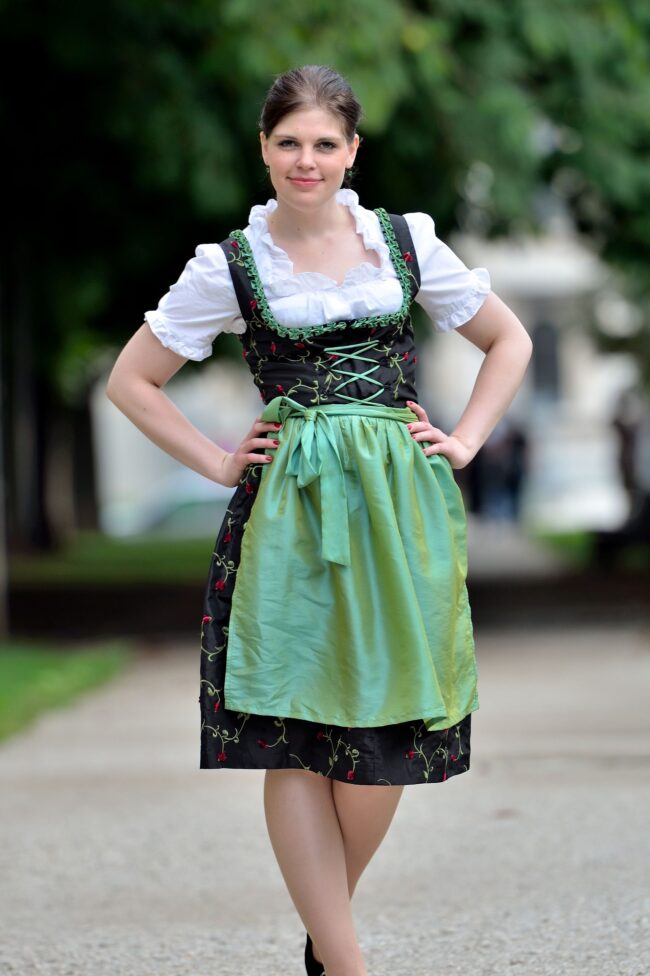 The girls suggested I wear Lederhosen, but that would be like two white toothpicks suck in a rotund potato!  I would scare the animals and tiny children! 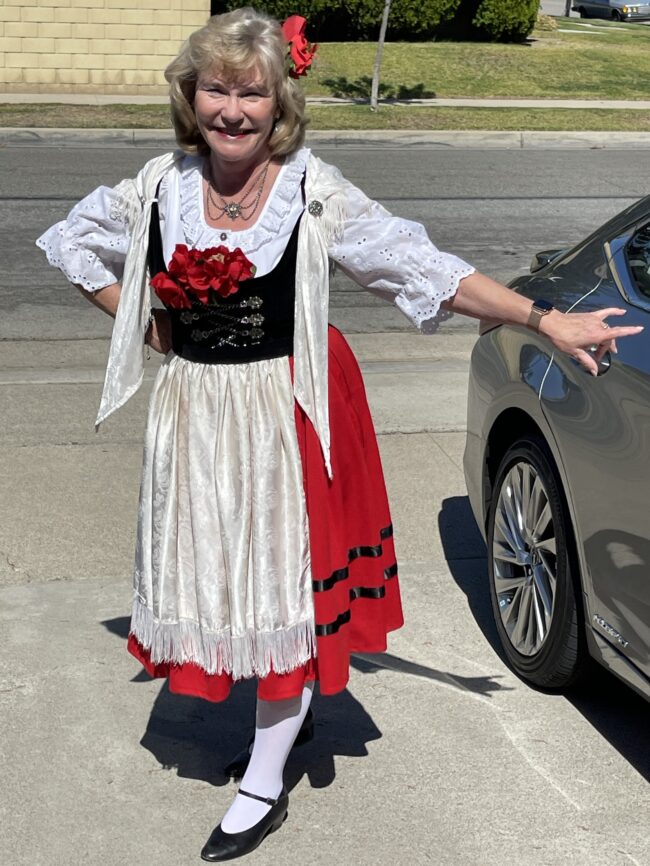 We are off to the Phoenix Club to meet up with Becky and Dan! 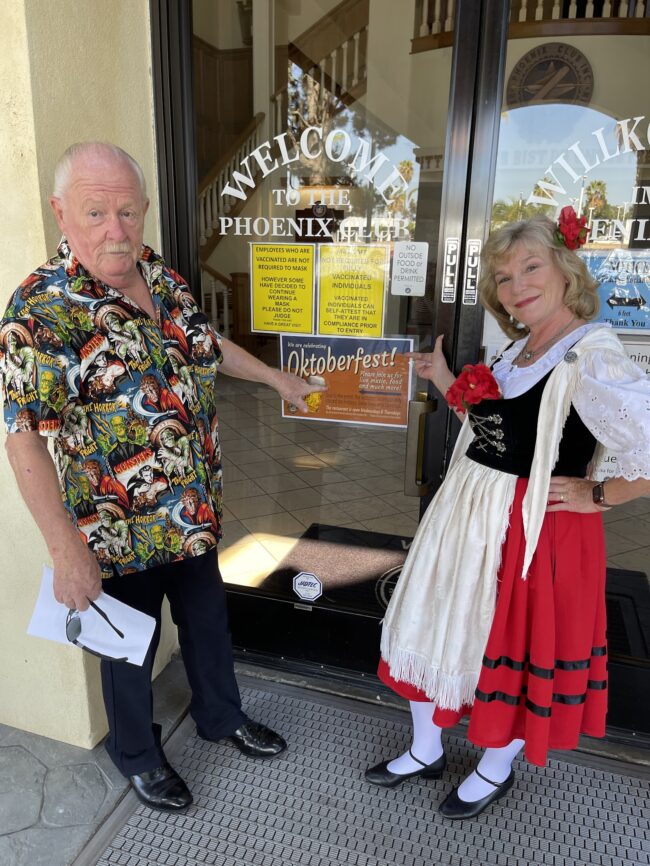 Dang, we can’t go inside and dance?

We have arrived, and the Phoenix Club is now only nine minutes away! 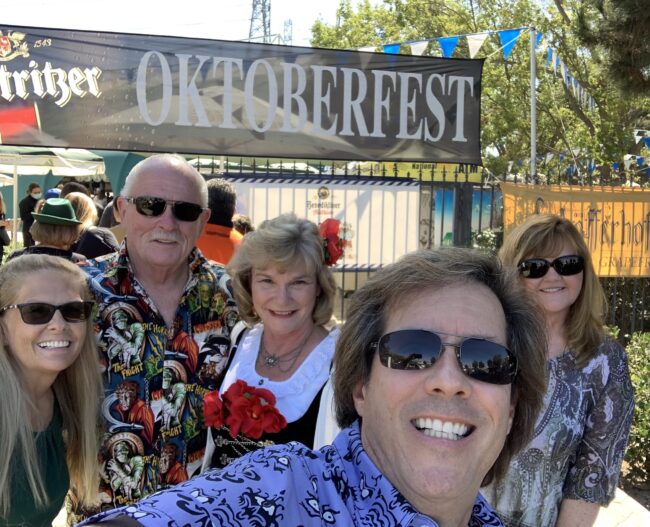 We are on the lookout for Becky and Dan.

We stood in a mile-long line, but it was with family, so it went quickly! 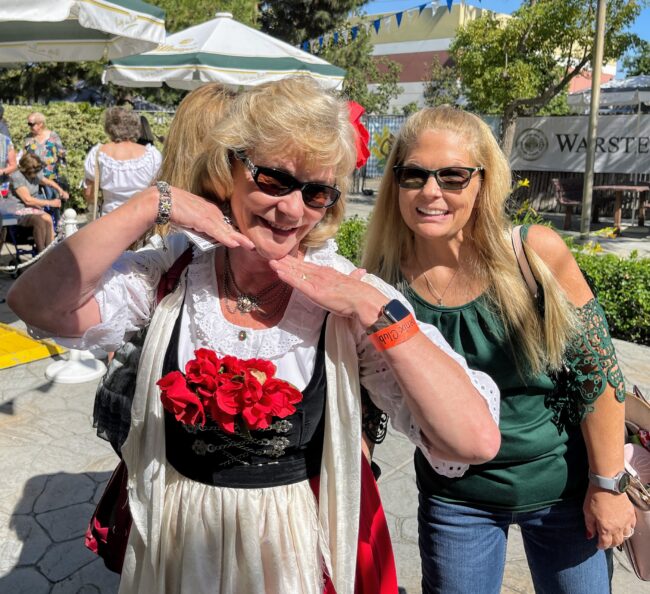 Mary was practicing the Robin pose!

We found Becky and Dan and got an excellent table inside the big tent! Mary and I did a swing and a waltz attempting to dance between the little kids on the floor! It was a bit noisy, but that was to be expected. 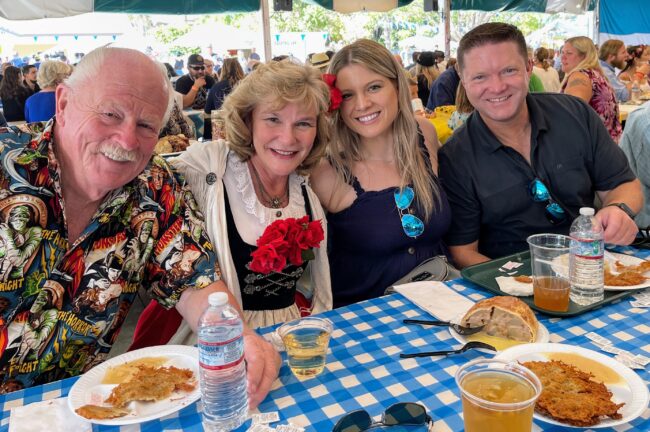 We all had a great time!

Mary practiced her Sound Of Music look as she danced down the aisle!  We met up with Louisa and her family there, which was a bonus! 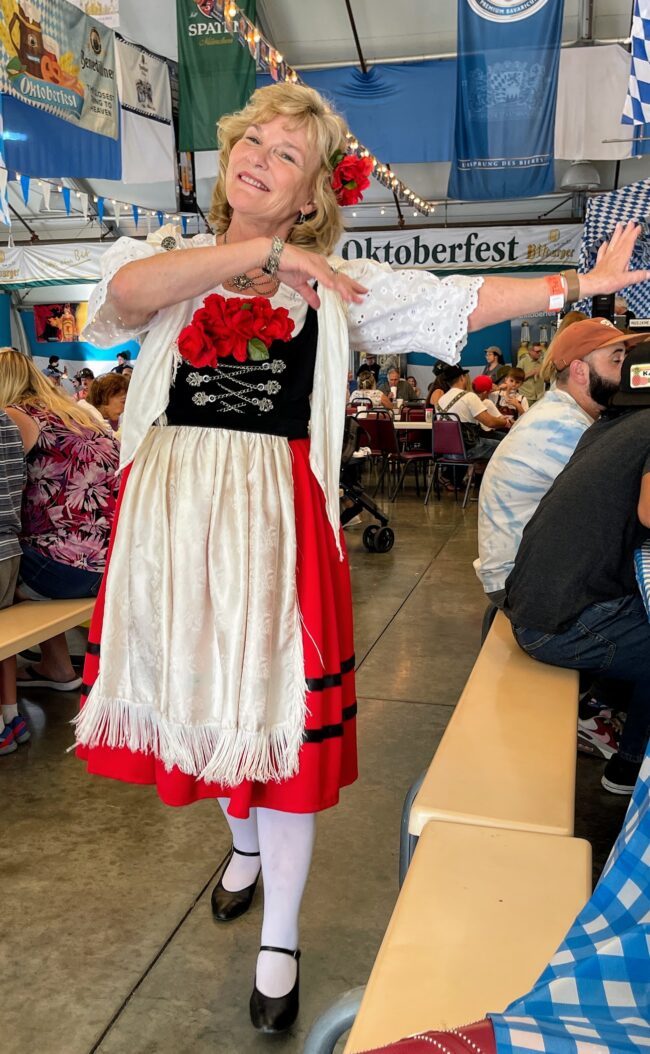 We were waiting for an outburst of a song from “Sound Of Music.” 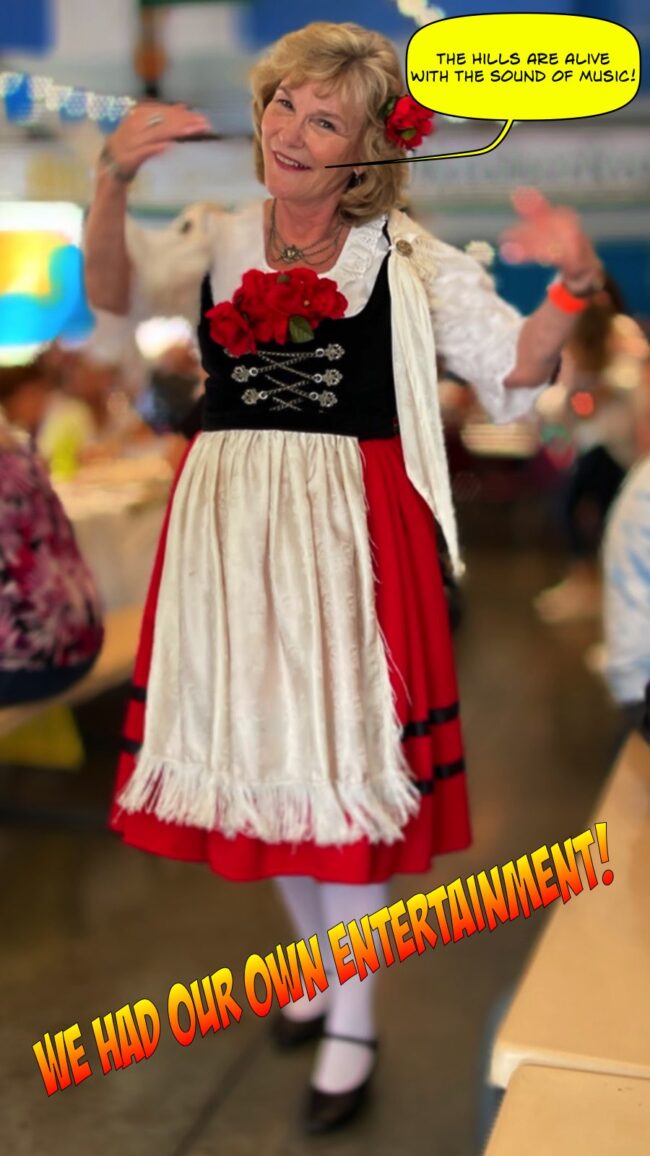 Singing her heart out and breaking mirrors as far away as Santa Ana!

Mary got some visiting time in with Becky, who is very busy these days with her career.  The whole table had loads of time to share. 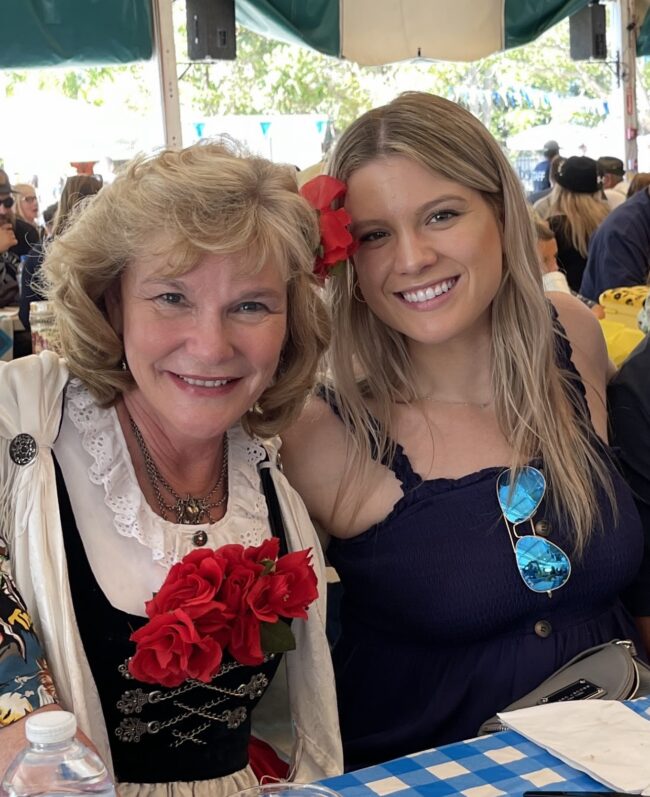 Then it happened!  The Germans did the “Whip Dance,” and Mary took extreme notice. 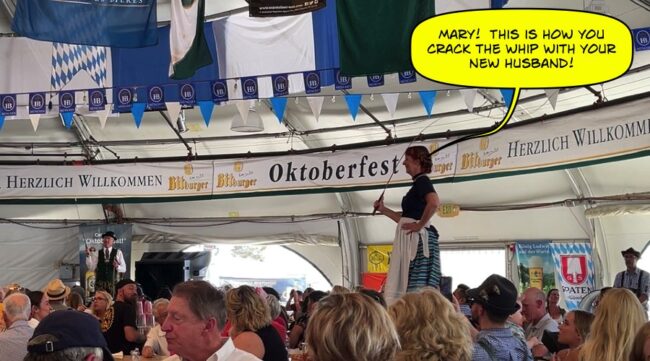 Great! Now I am going to be in trouble!

Did You Know: The Schuhplattler is a dance where male dancers in a line or circle are repeatedly hitting the soles of their shoes, their thighs, and their knees; this is Schuhplattler. This dance is one of the oldest dance routines in the world and is said to date back as early as 3000 BC, but it first appeared in recordings around the year 1030 by a monk in Bavaria. This dance was primarily performed in the Bavarian and Tyrolean Alps by farmers, hunters, and woodsmen.

We departed about 4:00 PM and headed home for a well-deserved nap!  We only had two glasses of wine, but we did do some serious potato pancakes and a tiny bit of dessert! 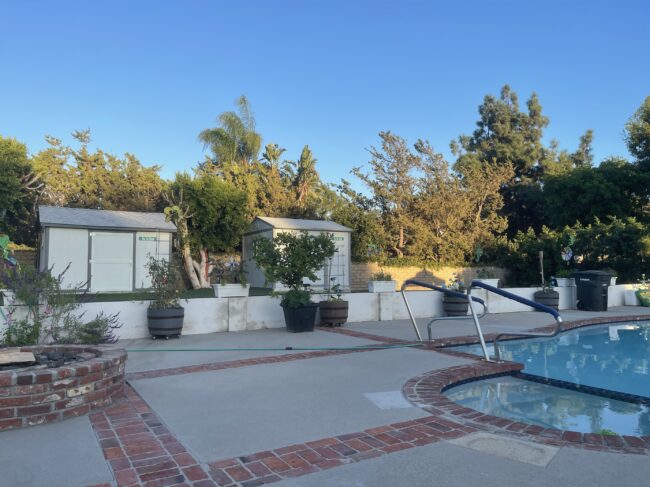 We watched Ghost and, as usual, saw some new things (to us).  We crashed about 10:30 PM as Mary must work tomorrow, and Colleen has last-minute things to do before departing tomorrow at 4:00 AM!  We are going to miss that girl!!

Just an old retired guy trying to finish out my last years on this planet. I lost my best friend and wife in early 2020. I was blessed again by reconnecting with Dr. Mary Côté, a long-time friend. Mary and I got married July 28th, 2021, and are enjoying life together and plan to spend the rest of our lives being a blessing to our friends and family.
View all posts by Paul →
This entry was posted in Dining Out, Family, Food and Wine. Bookmark the permalink.