Busier than a one-legged man in a butt-kickin’ contest.

So, I was up at 7:30 AM when my iPhone erupts with a message saying, “This is to confirm your 8:00 AM appointment to have your blood tested”.  Holy baloney, not only am I late, I forgot to study the night before.  So, I ran into the bedroom, tossed on my cleanest dirty shirt, popped on my jeans (Comando mode), and found a pair of shoes that may or may not have matched, and then tossed water on my bozo-like hair and hit it with a hairbrush.

I don’t ever get blood tests usually.  It’s not because I’m afraid of needles or anything.  It’s just that my blood’s under enough pressure as is.

Into the van, I flew like a flash, I opened the windows, and threw out the trash; I made it to the doctor’s office at 8:05 AM, at which time a nice lady came out and said, “It will be a few more minutes; the vampire is stuck in traffic. AAARGH!  I looked like a train wreck and had to sit twenty minutes with the other patients staring at me. Was it the mismatched shoes, or mismatched socks…oops, I had no socks! They acted so superior! 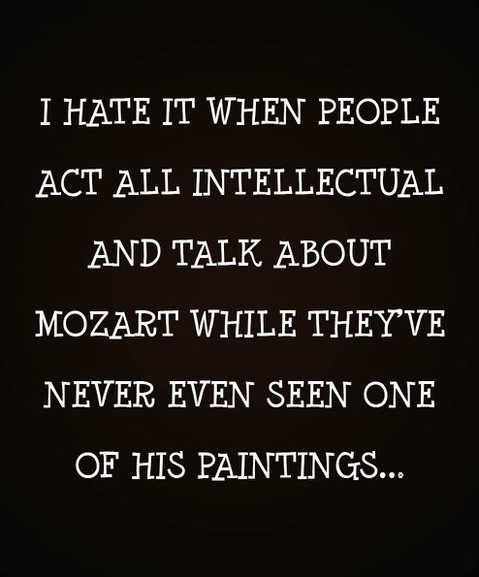 I guess that’s the earliest I’ve ever been late. So, I just ignored them and waited until the vampire called my name! 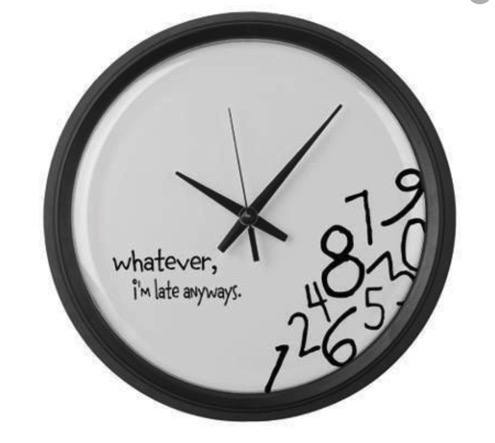 Mary was at my house when I returned with Scout because we are going to lunch together, and Robin is coming over later on.  She took a look at me and said something like, “Your mother dresses you funny.”  Perhaps it was the fact I only had one sock on? Oh well!

We worked on the puzzle for a while before I got properly attired.  We went to the Santa Ana Elks, where we did “Girls Night Out” with the guys.  On entering the property, we saw the BEHR Headquarters flying Old Glory, and with the wind, it was beautiful! 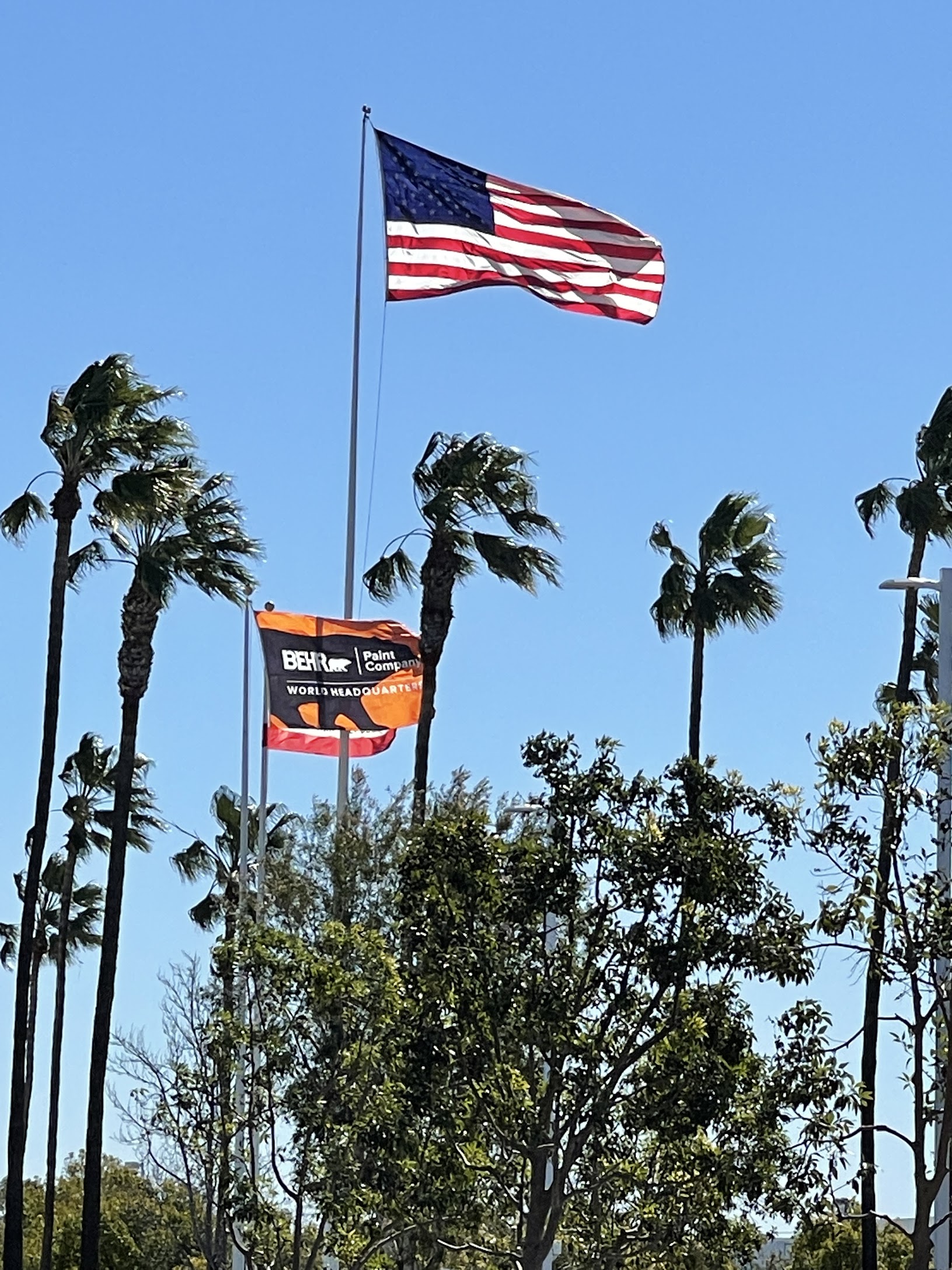 Seeing that beautiful flag brings a tear to my eyes.

We went into the Elks, and our table was waiting.  Today we had Bill Capps, Mike Andersen, and finally, Bob Z showed up.  We invited Ron, a new Elks, to join us.  He is a retired county sheriff and a really neat guy, and we hope he stays with us on Thursdays. 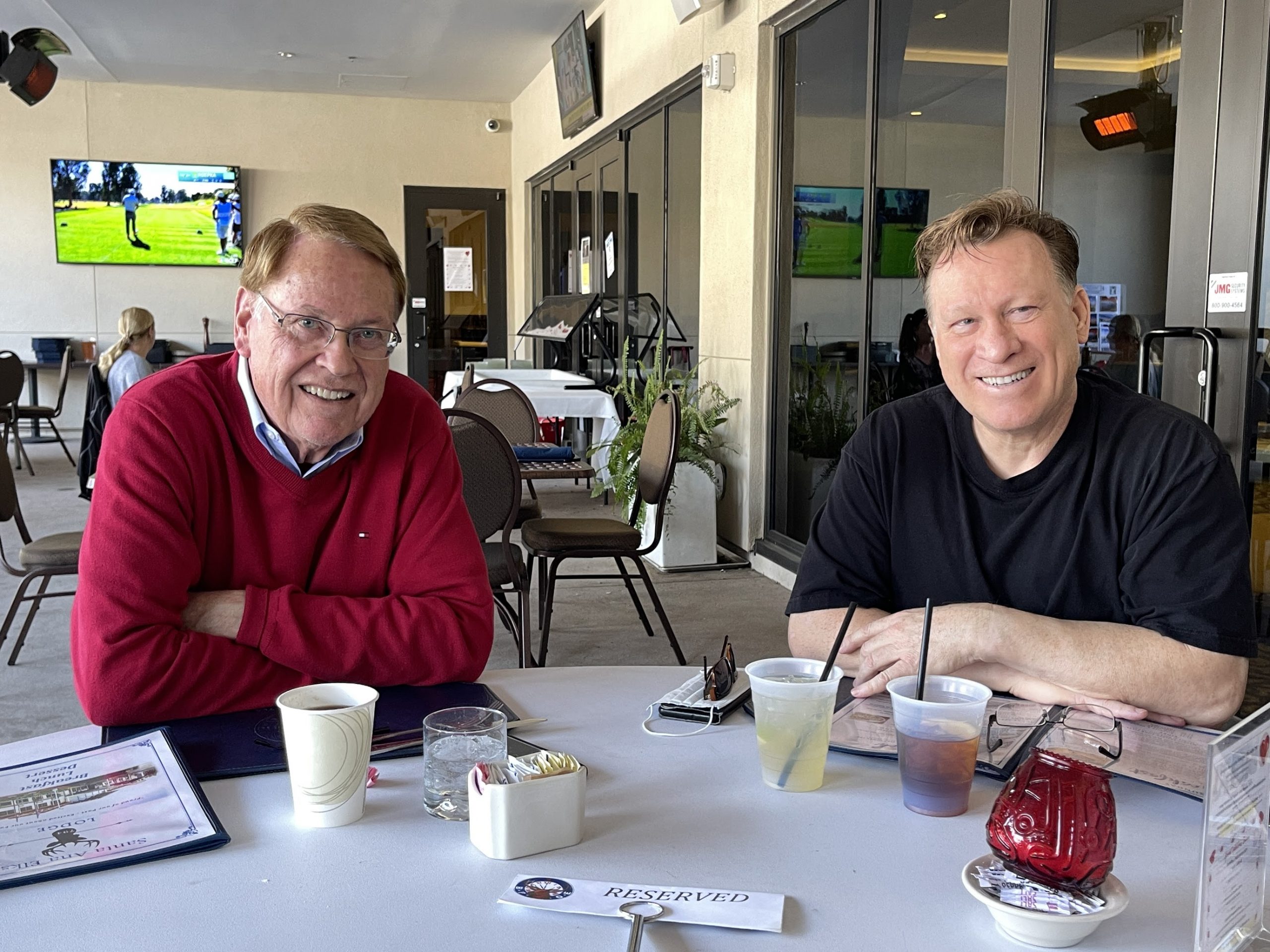 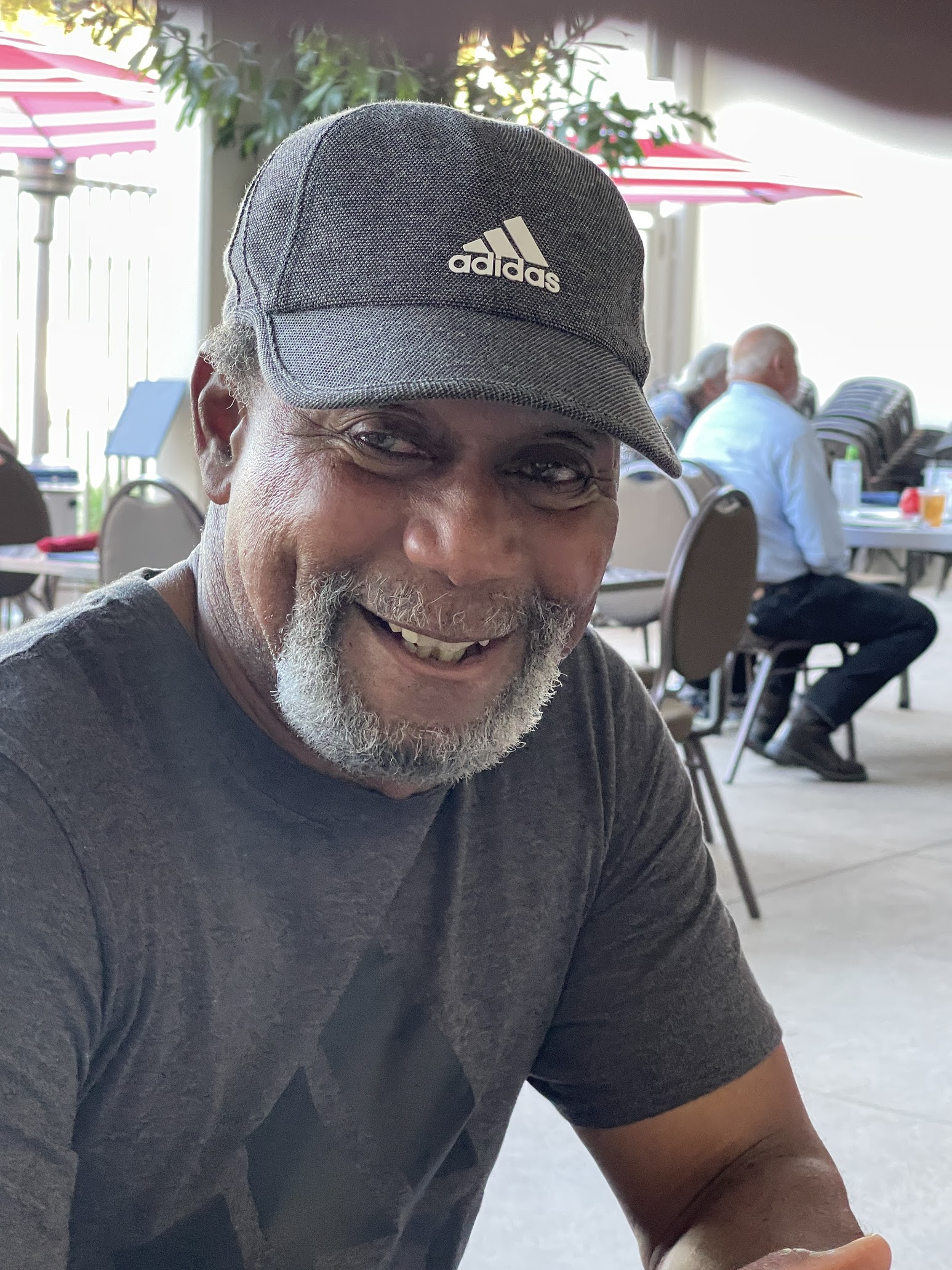 Welcome Ron to the group!

Mary joined me today and is now officially “one of the girls,” go figure! She fits right in and makes for a delightful lunch partner! 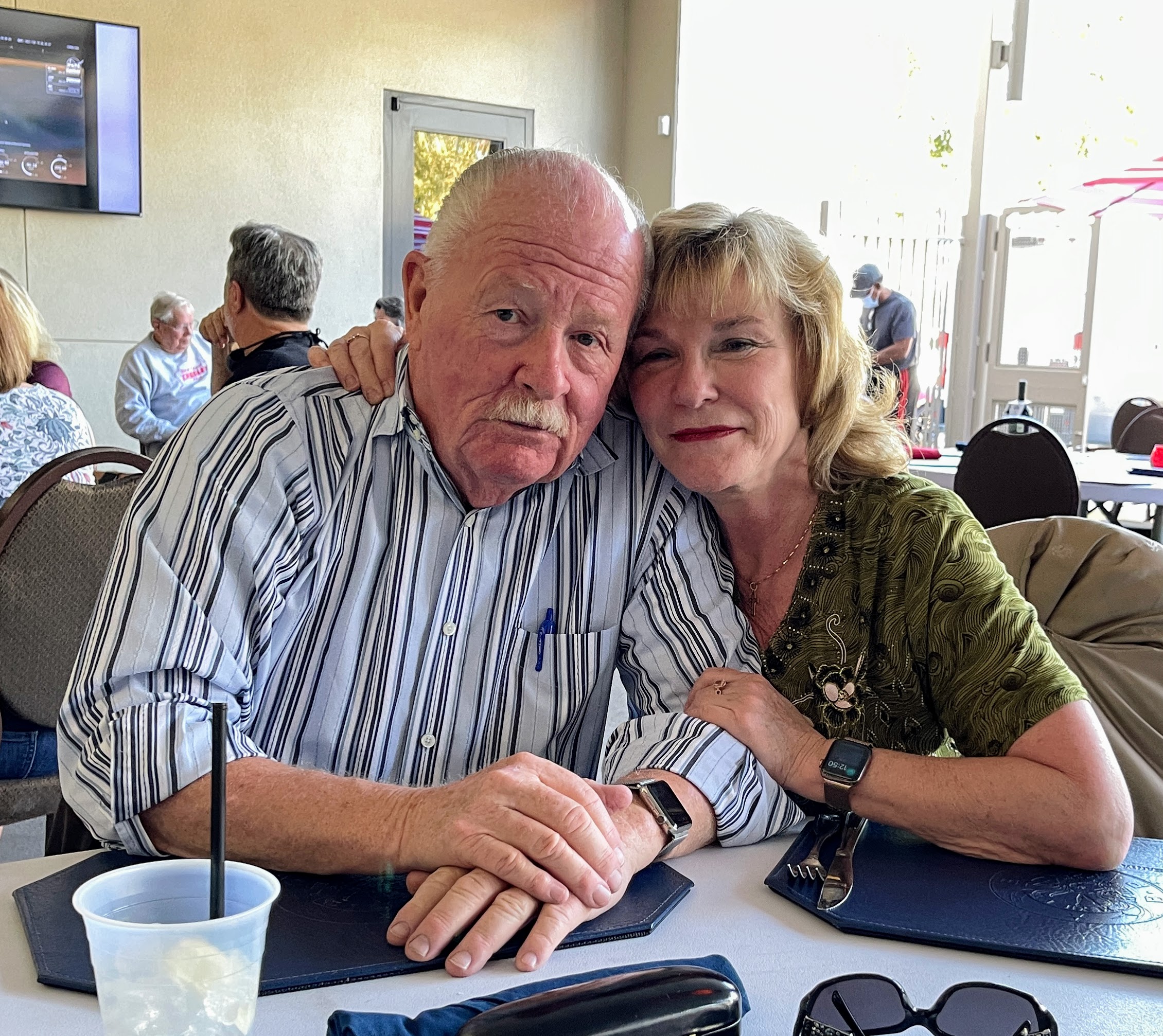 That’s me on the left!

Bob arrived late, and we stayed until he finished his lunch which, like me, he devoured in two bites!

From the Elks, we went to visit Jan and bring her some of Mary’s famous Quiche.  We visited her for a while and then went to Mary’s.  We were driving the van because it had Mary’s new area rug, which we installed.  Mary gathered some things, got the mail, and we returned to my place to await Robin’s arrival.  We decided to go to Patty’s Place again for dinner.

I was going to make her potato chips tonight but Patty’s sounded better. 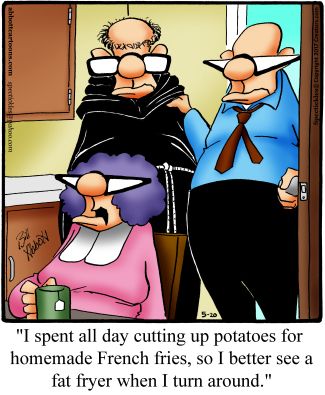 Robin got home before us, so we visited with her for about a half-hour and then headed to Patty’s beach.  I failed to take any pictures because we were enjoying just being together, plus all the banter with the wait staff and Dr. Chuck, Chief Booze Slinger! I did remind them of my termite joke. This termite walks into a bar and asks, “Is the bar tender here?”  I do however remember what happened when Mary walked into Patty’s after last night!

Of course, Mary had a reply to that, “A neutron walks into a bar. “How much for a beer?” the neutron asks. “For you?” says the bartender. “No charge.”

I ate too much!

Just an old retired guy trying to finish out my last years on this planet loving my best friend and wife, having fun, learning, and passing on helpful things to others.
View all posts by Paul →
This entry was posted in Food and Wine, Friends. Bookmark the permalink.
Powered by Maribol IMDB Plugin