Our dead are never dead to us until we have forgotten them. I will never forget Miss Sue as long as I live.

One year ago, at 7:16 AM, my beloved wife and partner of thirty-three succumbed to death after a long and brave fight with several medical conditions.  As it has been said, she is in a better place now and finally pain-free. She was amazing and, for the last several years, endured pain that would make most people give up. 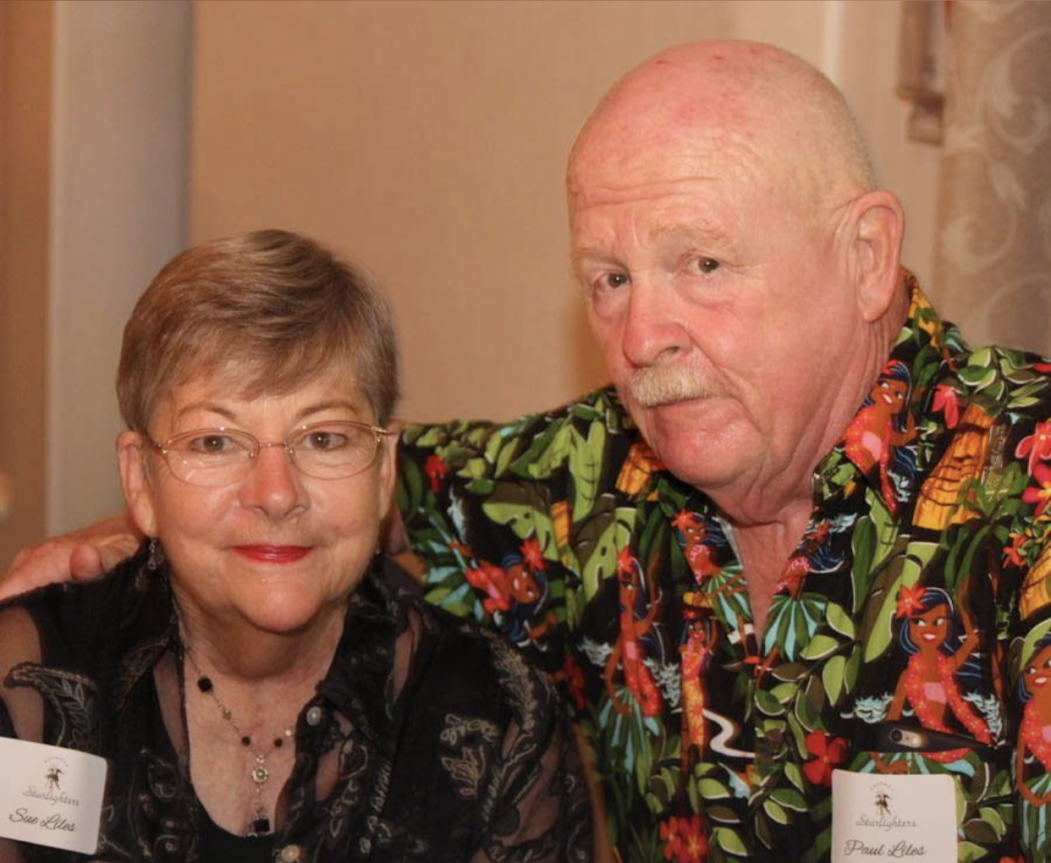 We danced as long as we could! We are at Starlighter’s a few years back.

In the last year, Sue kept telling me her time was short, and I did not believe it at all.  She told me to continue and live life and keep loving our family and friends as we both have all these years.

I was blessed to have Mary, Irene, and Robin with me all day, and they reminded me over and over of Sue’s amazing life and how she affected so many people. I had to smile when Mary said, “I appreciate Sue so much; her training of Paul was so well done!”

I posted a simple note on Facebook and was surprised that over 100 people commented on her amazing life; people from many years ago remember what an amazing person she was.

Probably the nicest tribute from my youngest daughter, who knew Sue so well.  Collen posted:

It’s Been a year today that I heard my father cry for the first time. Hearing the words, she is gone took my breath away. She didn’t have to accept me, but she did. She didn’t have to love me, but she did! I was a rotten teenager when she came into my life, and I didn’t give her a chance till 3 years later, and when I did give her a chance, she had open arms. She was the one who went with me to pick out my wedding dress. She was the one who was there at the birth of daughters, and I even gave my youngest middle name her name; she meant that much to me. Being 3000+ miles away was the worst feeling knowing I couldn’t be there like the rest of the family, and had I known the last day my dad video chatted with me while she was trying to eat (I said dad let her eat I don’t have to watch her), I would have kept that camera on her forever. She never tried to take my mom’s place and always signed her cards with mom, and on the last M of “mom” she attached a 2.  I miss you!!

Mary had two patients this morning and returned at 11:30, so we could go to lunch.  Robin and Irene worked in the kitchen, keeping me laughing as they puttered.  Irene taught Robin how to make the Greek dessert, baklava.  While I was at the market earlier with Robin, I picked up a dozen Granny Smith apples, and miss Robin made apple sauce. 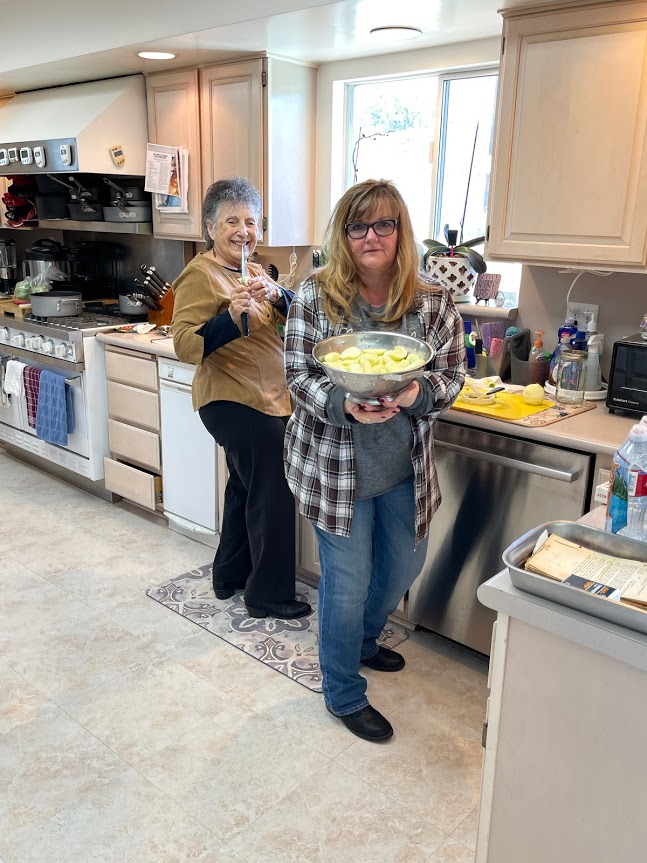 Busy in the kitchen, keeping my mind off things!

The little black doohickies are cloves, but we picked them out before eating.  The apple sauce was chunky, our favorite kind! 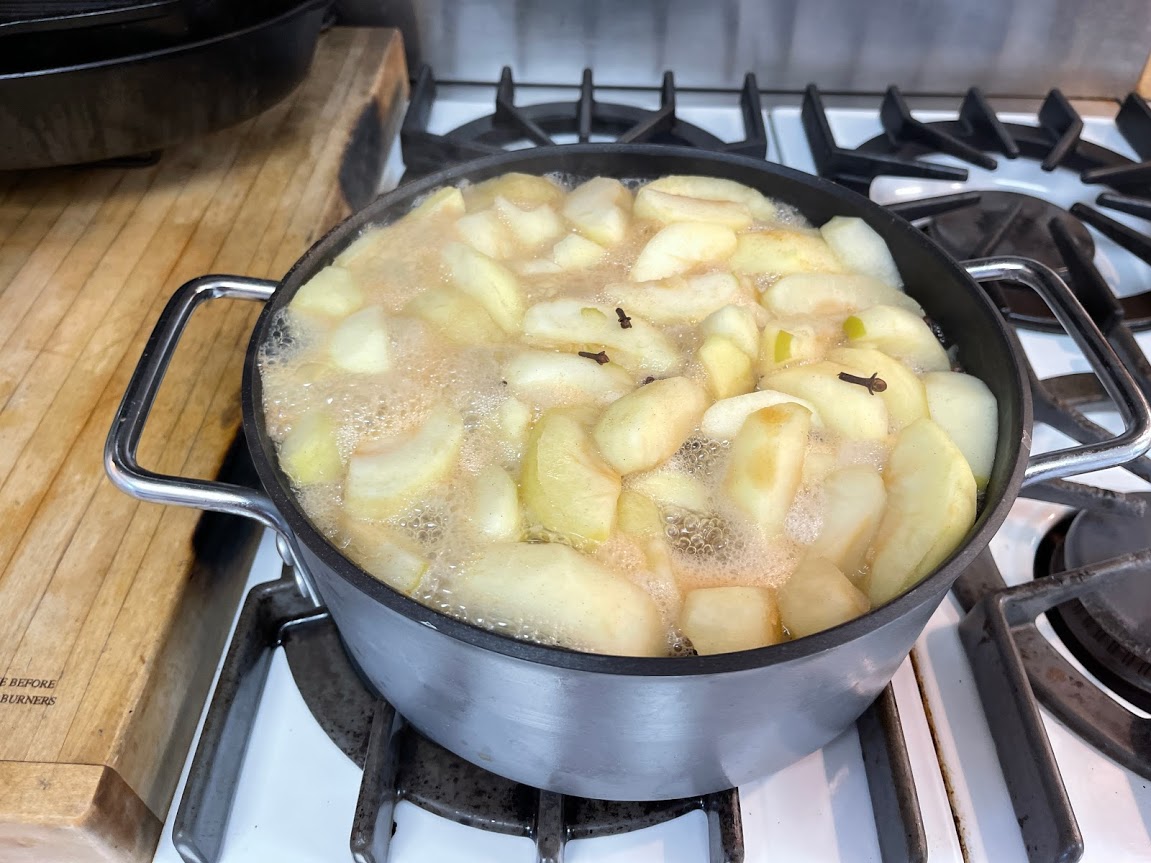 We went to lunch at George’s Greek restaurant in Long Beach, a place Sue and I would often go.  Sue would be happy for me finding Miss Mary, and in fact, Sue said on several occasions, “You have a mini-crush on Mary, don’t you?”  I answered, “Yes.”  Mary, Sue, and I have known each other for almost seventeen years; Mary was a member of Starfighter’s Dance Club for years, and we all danced together.

We laughed, remembered, and talked about Miss Sue and her love for Greek food, especially the saganaki.  I told them of the story of Sue and I making saganaki and darned near set fire to the kitchen; we laughed and laughed about that event for years. 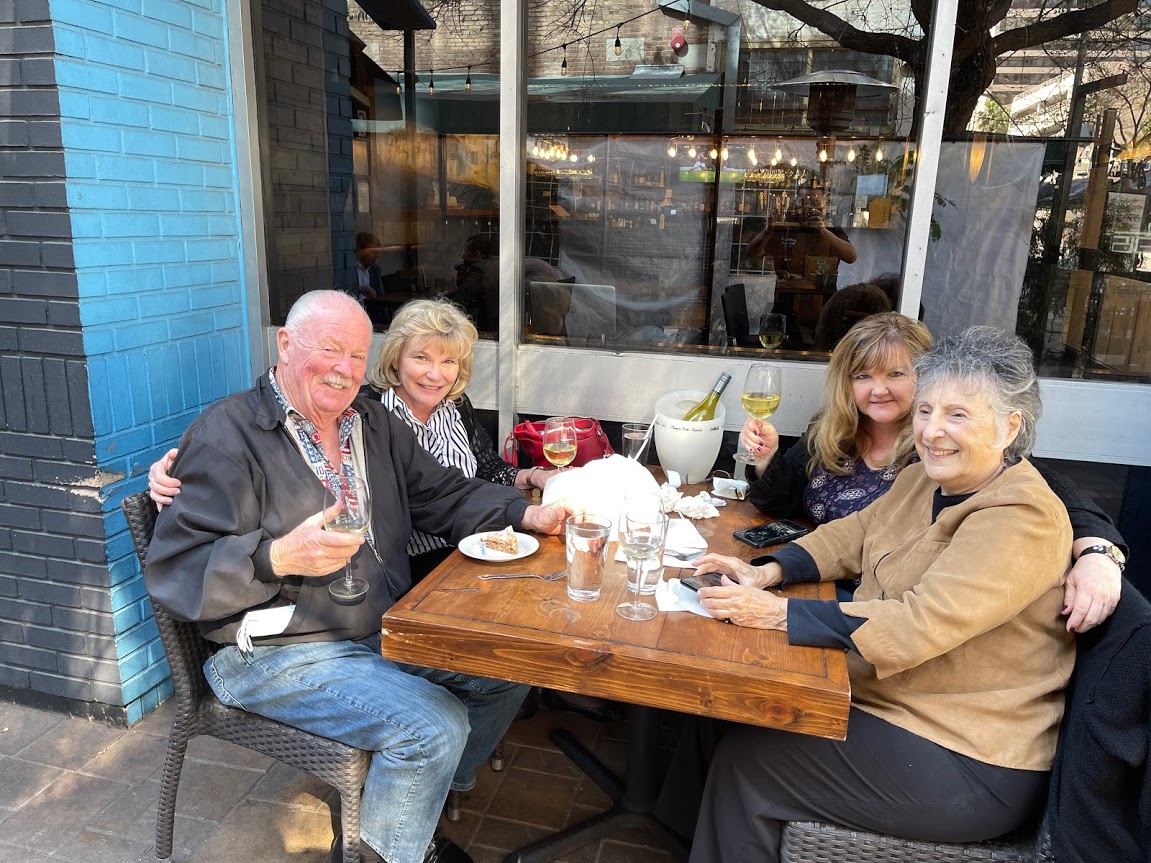 We celebrated Sue at one of her favorite places to dine.

I had my favorite right after telling the waiter it was my birthday; the devil made me do it. During the meal, I remembered how many times Sue and I would go there, and she had so many choices of vegetarian dishes. 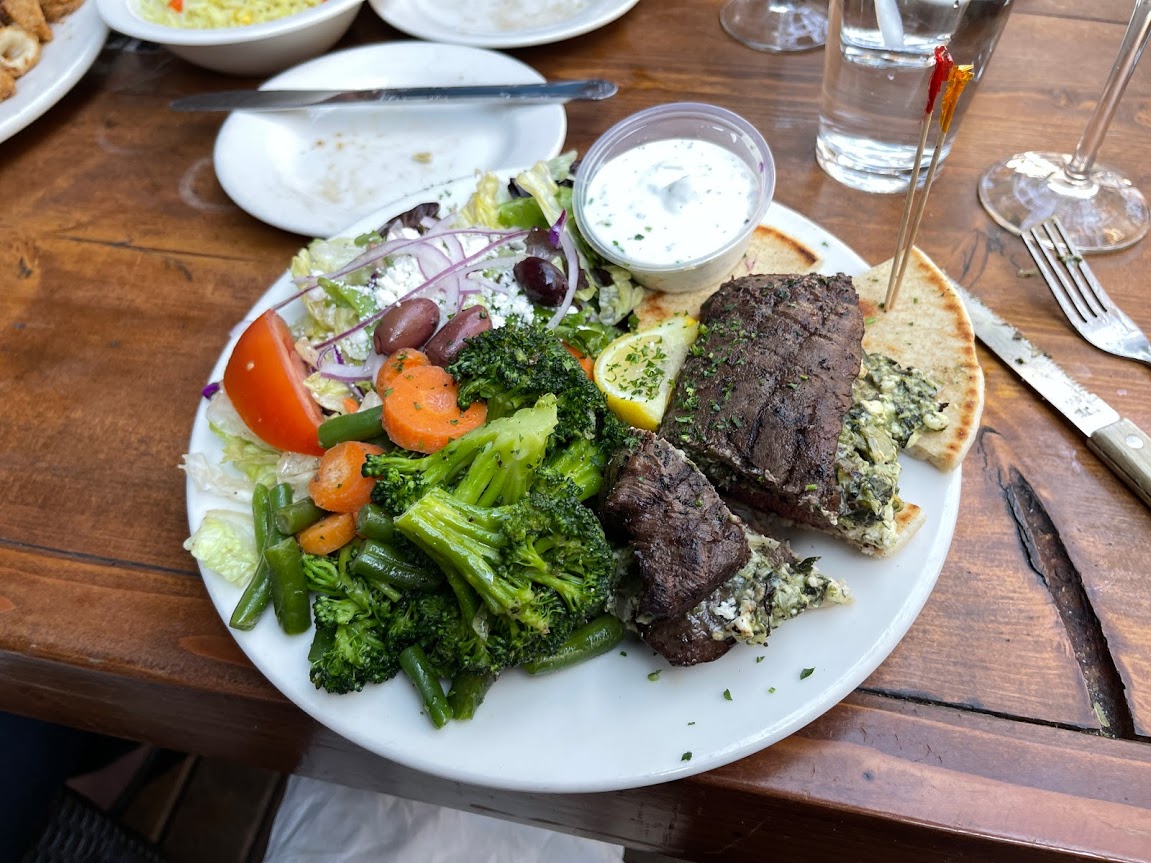 Poppy had stuffed steak stuffed with spinach and feta cheese.

I told the waiter it was my birthday; I have no idea why BUT I did get a free dessert, spanakopita! 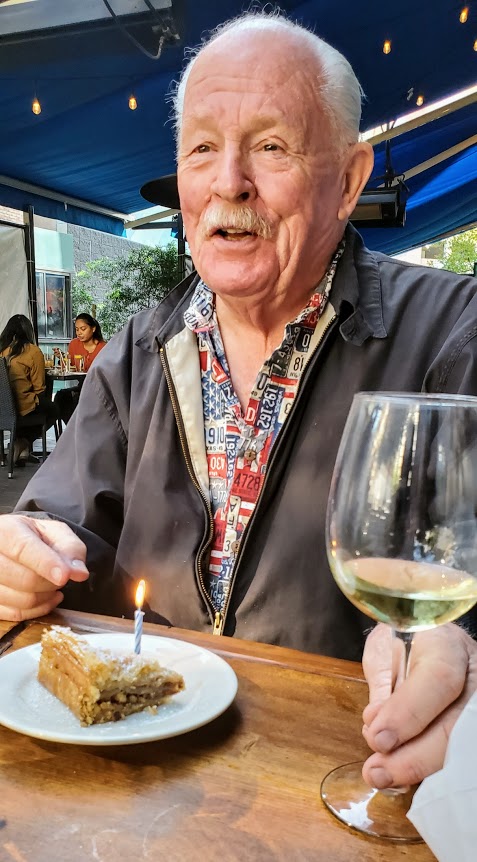 He sang Happy Birthday in Greek with a Mexican accent; it was amazing!

Returning home, the ladies stayed with me for a long time.  Mary attacked the puzzle while Robin continued with her Greek cooking lesson. Irene said we have to move quickly to keep the phyllo dough from drying out.  Robin asked Alexa to play Camp Town Races…  I capture part of their singing.

The dessert was placed into the oven, and after a half-hour or so, we were ready to eat! 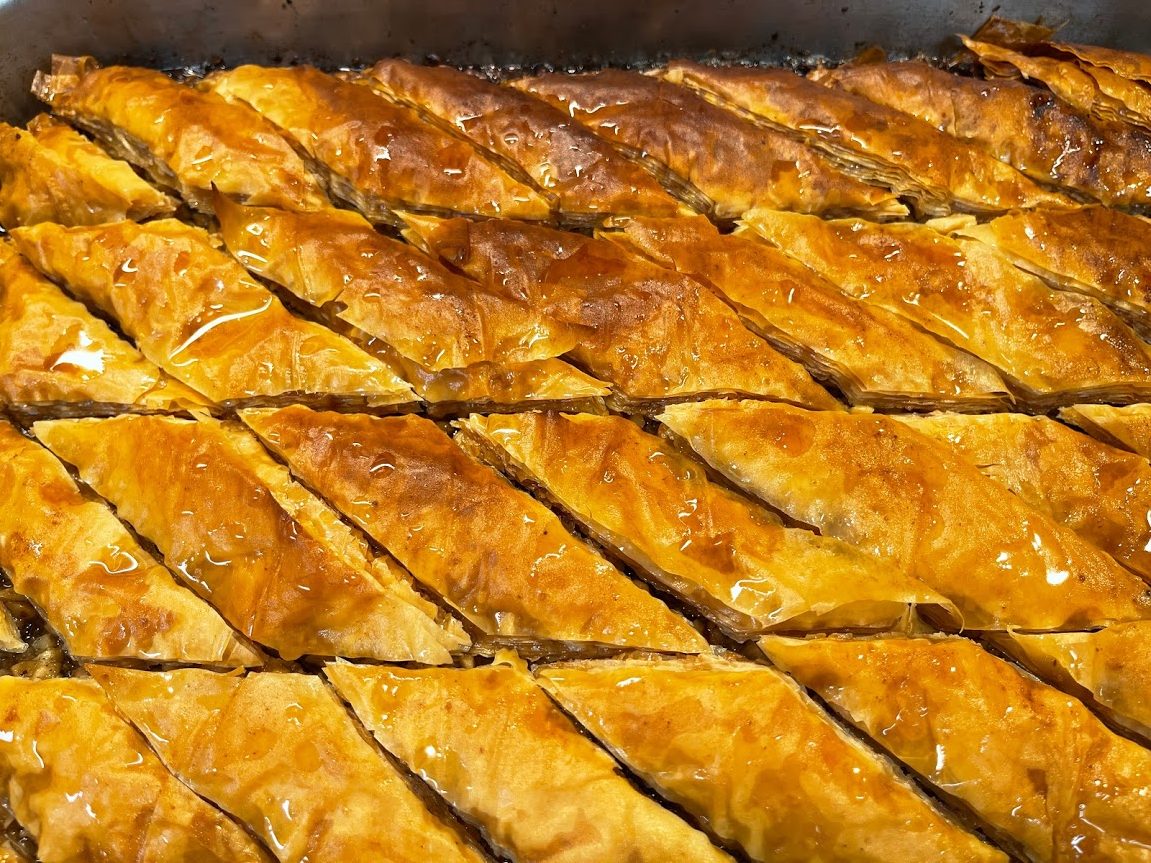 Mary provided adult supervision from a distance; a wise move!  She figured that the calories could not jump from the kitchen to the dining room! 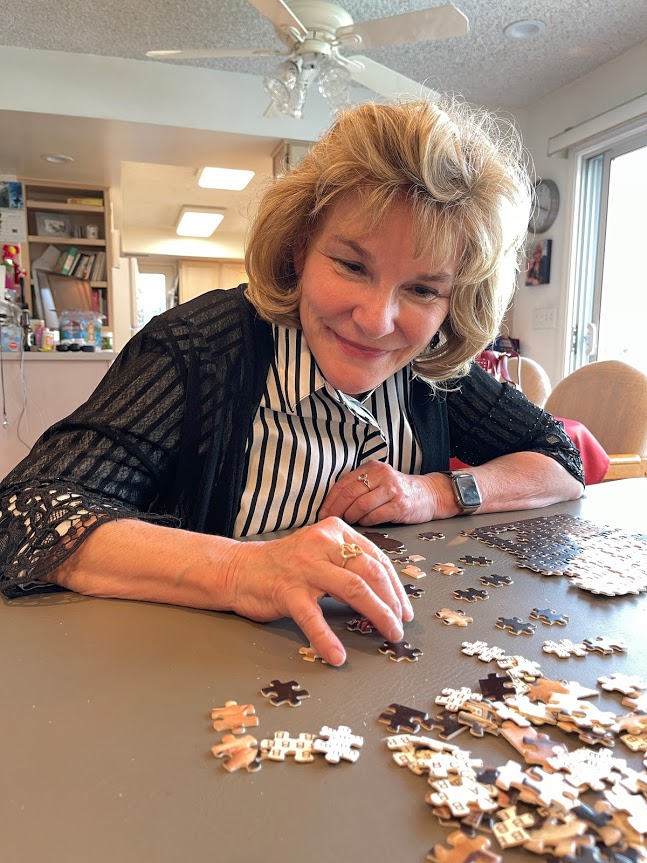 The “Puzzle Girl” hard at work.

There was a break in the cooking while the spanakopita was cooling and absorbing the honey.  All the girls hit the puzzle with vigor.  I stayed away for fear of getting hit by the flailing arms. 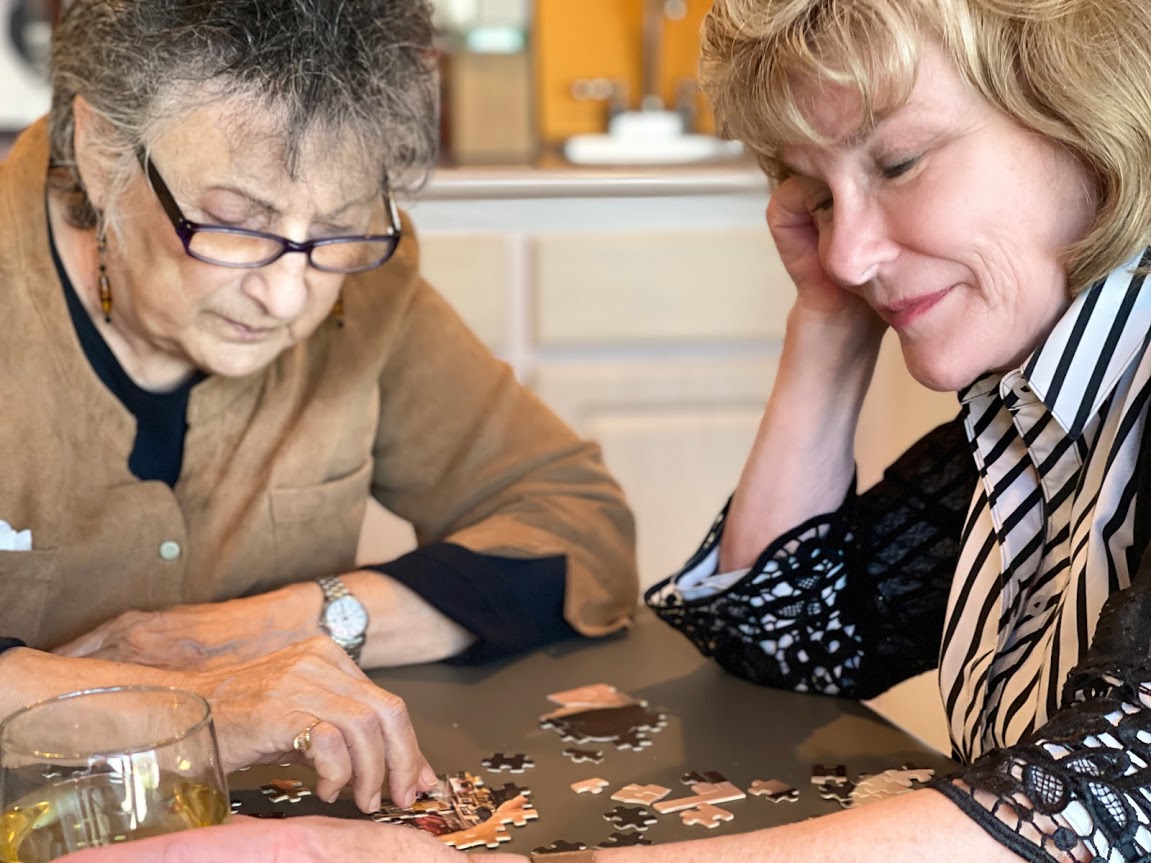 Irene and Mary attack the puzzle with vigor. Robin took the picture, but she was there!

Irene departed around 6:00 PM while Mary and Robin stayed, and we watched a Mission Impossible movie on TV. The day was made easier, surrounded by loved ones.  Colleen called a couple of times to do a health check (probably a sanity check) on me.  Son Joe called, Lisa & Pete called, Michele called. I felt loved. My grandkids called or left messages; all indeed loved Sue!

We crashed at 11:00 PM and probably missed half the movies. It was an emotional day.  I almost remembered my son, Mitch, who we lost this year.  He was another amazing person who I was counting on to take care of Sue should I go first.  The Good Lord has a plan, I am sure, so we shall see,

Goodnight, Sweet Sue. I promise to do as you said and continue moving on and being the best Paul I can be.  I love you!

Just an old retired guy trying to finish out my last years on this planet loving my best friend and wife, having fun, learning, and passing on helpful things to others.
View all posts by Paul →
This entry was posted in Cooking, Dining Out, Family, Food and Wine, Friends, Working Around House. Bookmark the permalink.
Powered by Maribol IMDB Plugin