I’m great at multitasking. I can waste time, be unproductive, and procrastinate all at once.

I was up and going at the crack of dawn as I had to see my Dermatologist about a rash I have on my back.  The appointment was at 7:00 AM, a wonderful time for me as I am an early person by nature.  The fog was amazing; I have not seen this kind of fog in years.

The “Derm” gave me a medication for the rash on my back and hinted I might be allergic to some new soap.  I will have to think about that. 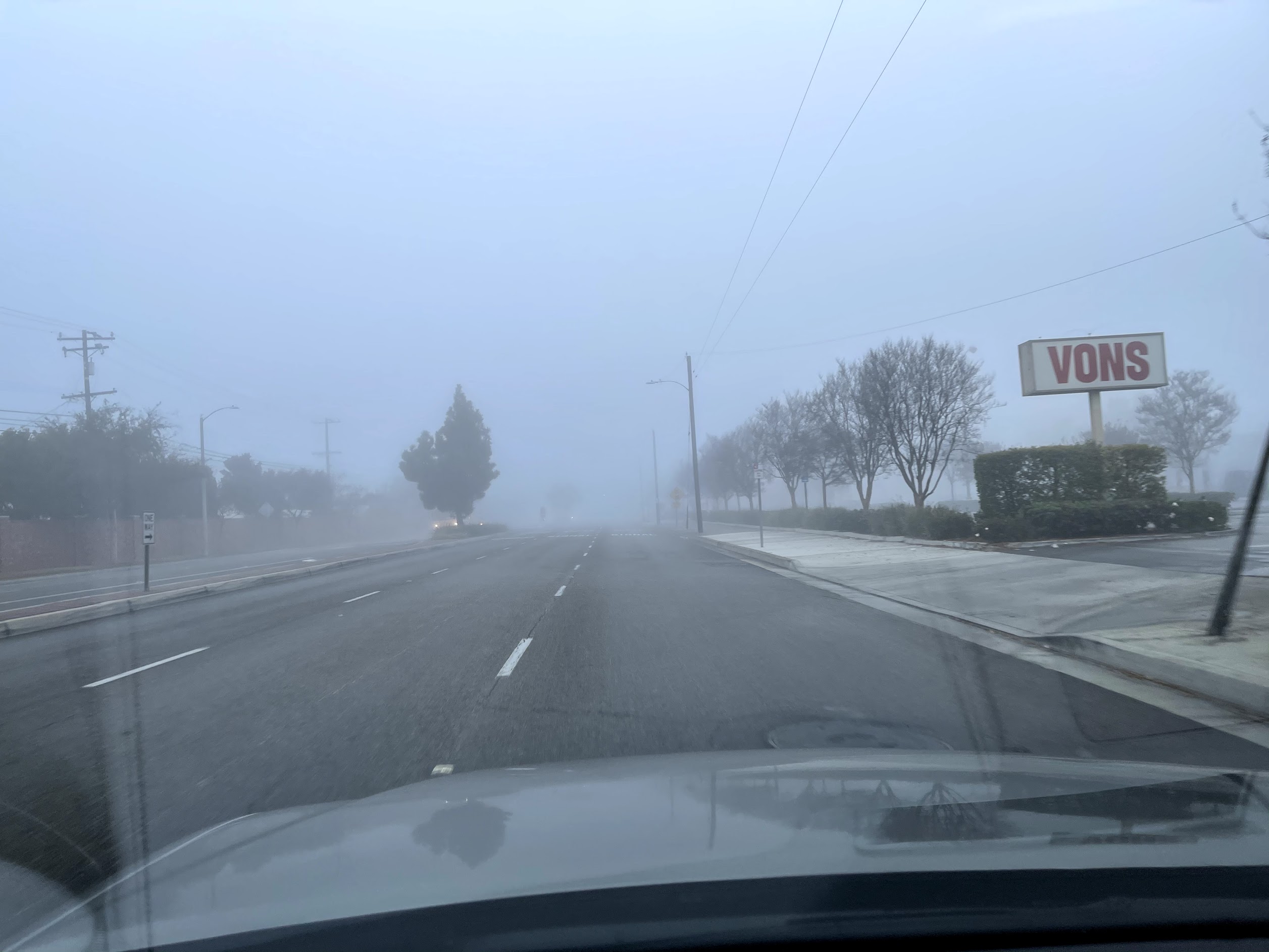 The fog was pretty thick and has been for two days.

Mary called and said she has a light afternoon, so I asked her to come over for dinner and I would go get Scout the Wonder Dog so we would not have to worry about him!  We, Scout and I, worked on the Christmas storage and finished about 11:00 AM.  Then I got a brilliant idea, why not surprise Miss Mary with a great dinner.  That meant beef stew a’ la’ Liles (meaning plenty of wine in the ingredients).  I went to Ralph’s and for the necessary ingredients.  Eye of Neut was difficult to fibd1

To Ralph’s market where I found a four-pound choice hunk of well-marbled meat!  We have a winner here! 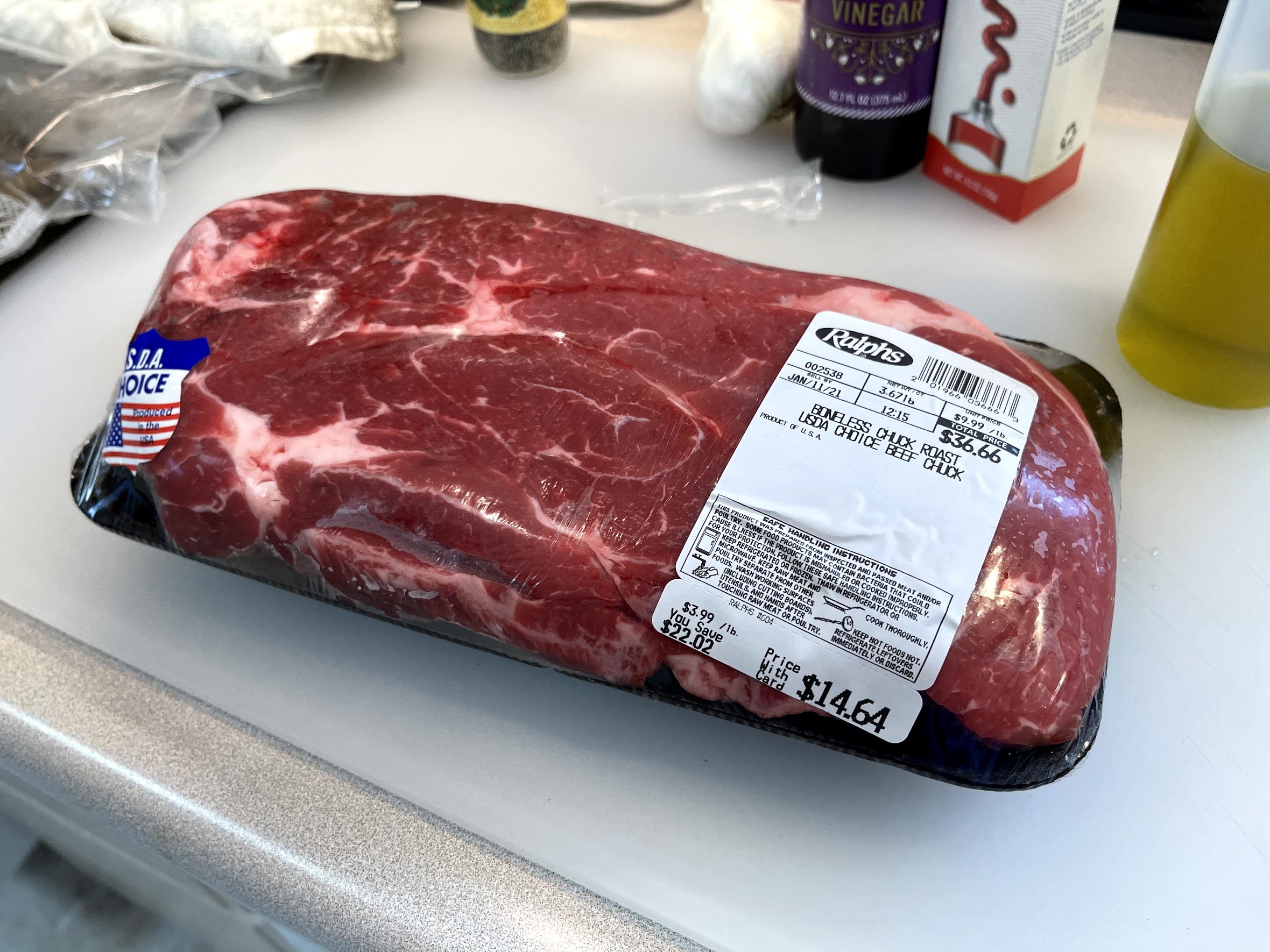 After a trip to the market!

I began the process about noon by chopping the meat into 1 1/2 squares. The recipe called for the meat to be well-marbled; it indeed was! 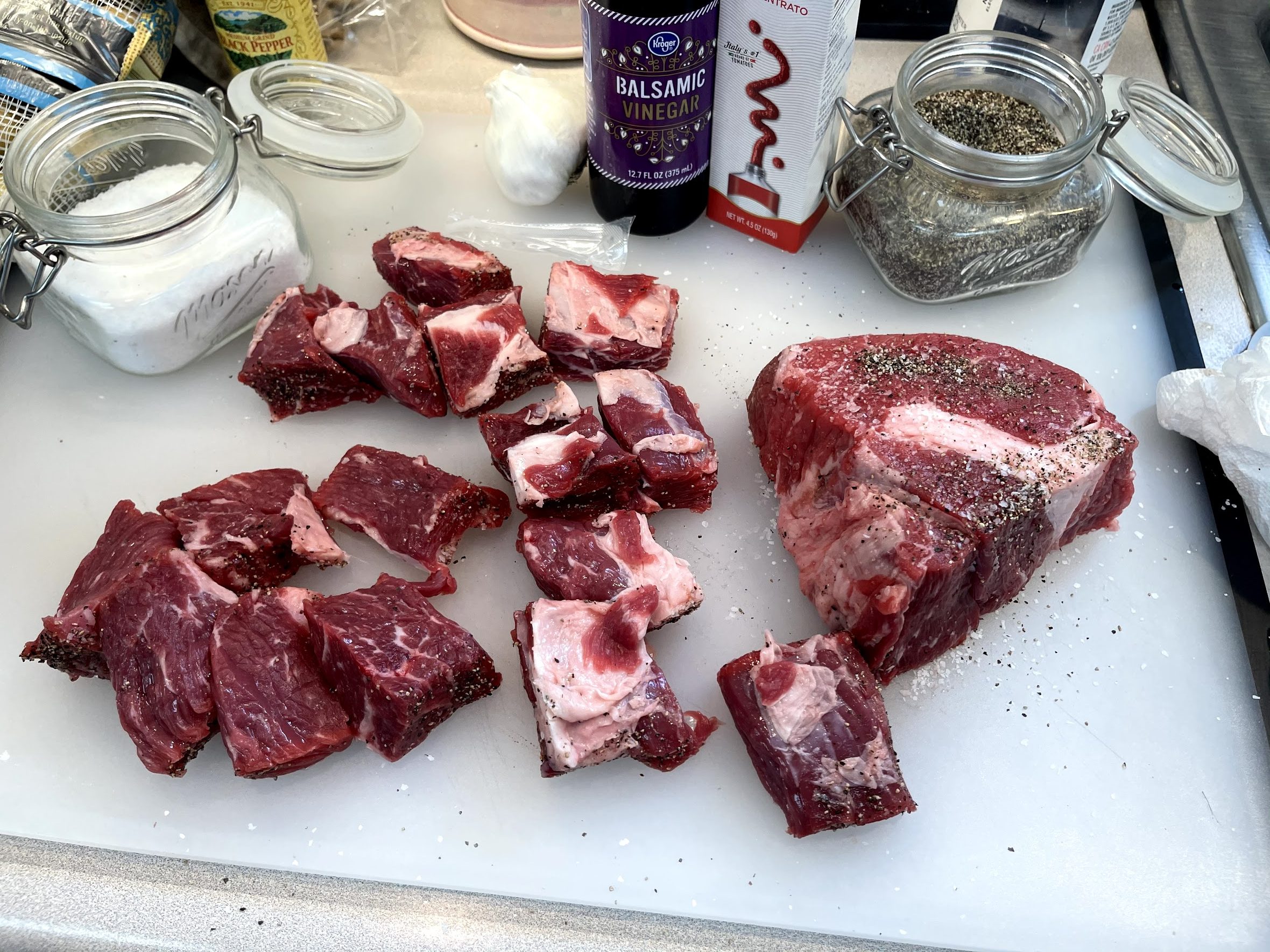 I had to do the browning in three separate segments.

Then we have to brown the meat on all sides, which requires about 5 minutes of cooking.  It had to be done in batches as putting too much on the Dutch oven would result in no browning, only steaming! 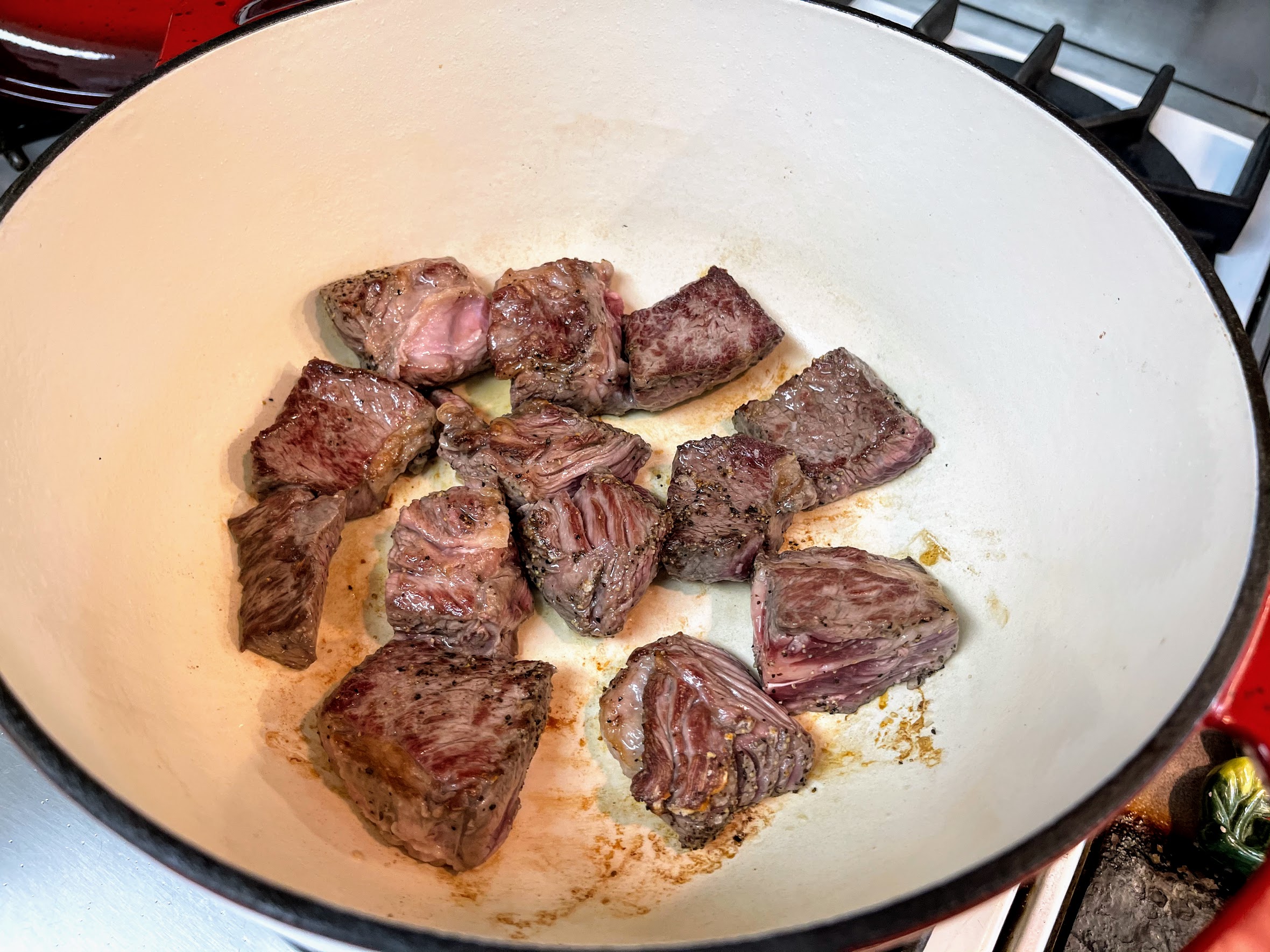 Browning the cubes of meat takes about 5 minutes with a tablespoon of olive oil! 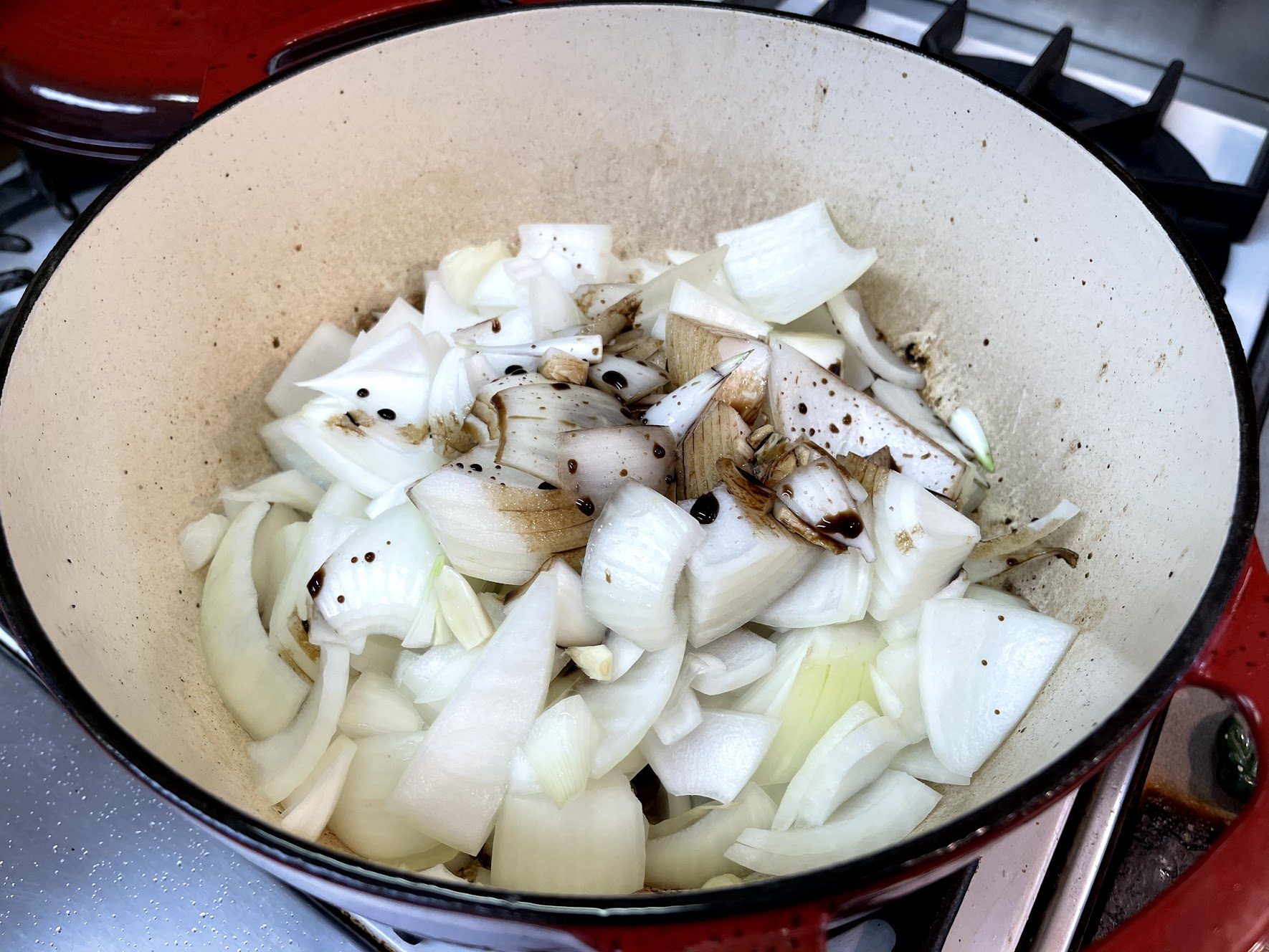 Now the onions and garlic plus balsamic vinegar.

The meat has been sitting outside the pot, so there was room to do the onions.  Now, the meat goes back into the pot for the braising portion of the recipe. 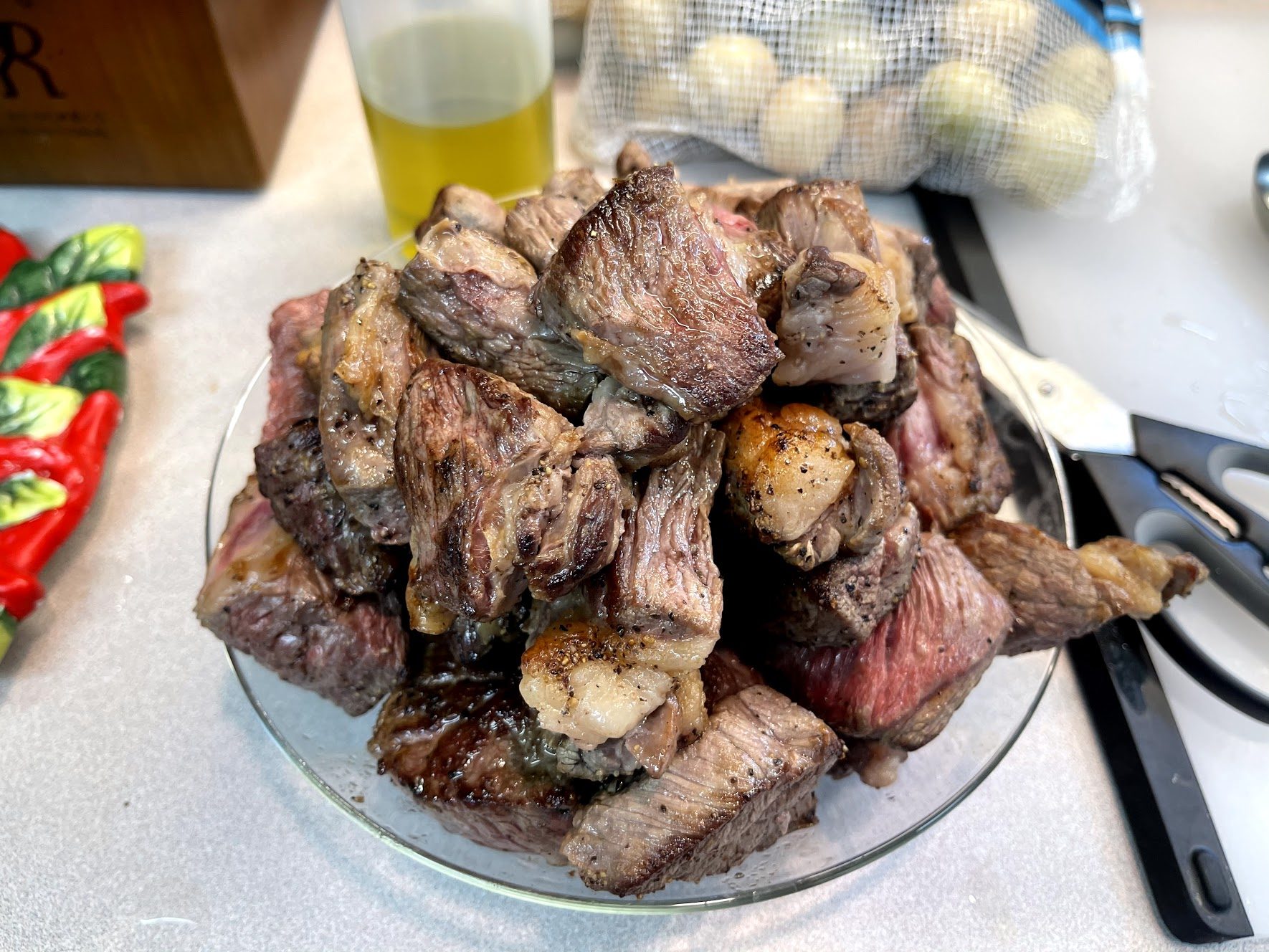 Ready to re-enter the pot!

After two hours of braising at 325 degrees, we are ready for the onions and potatoes!  It looks great.  After that, we added two cups of dry red wine, two cups of beef broth, and then two cups of water.   Then come the potatoes and carrots. Now we are ready to slow cook for about an hour!  The big Dutch oven is perfect for this operation. 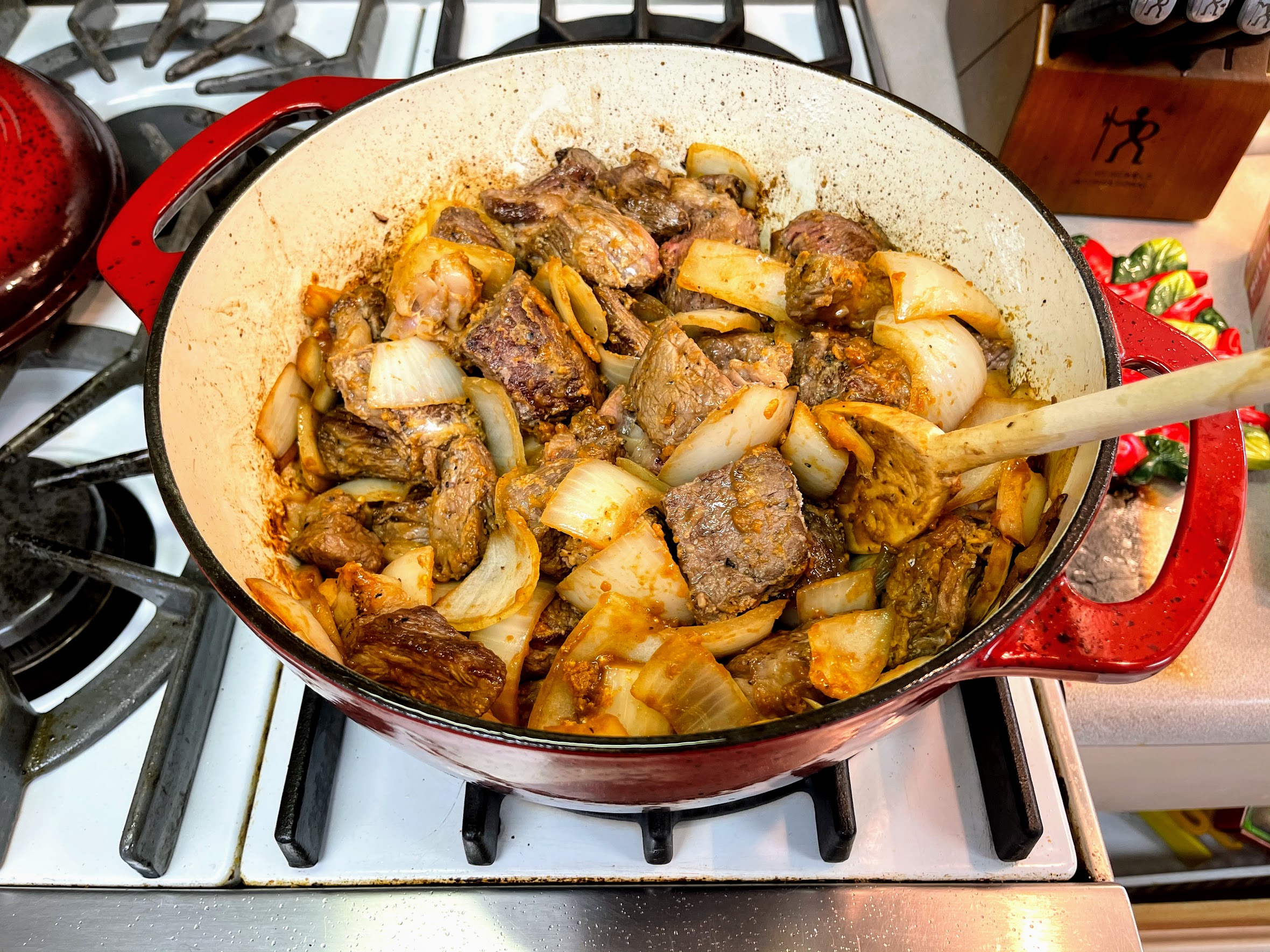 Time to braise for two hours.

The liquid now cooks for an hour bringing out the juices and all the flavors. 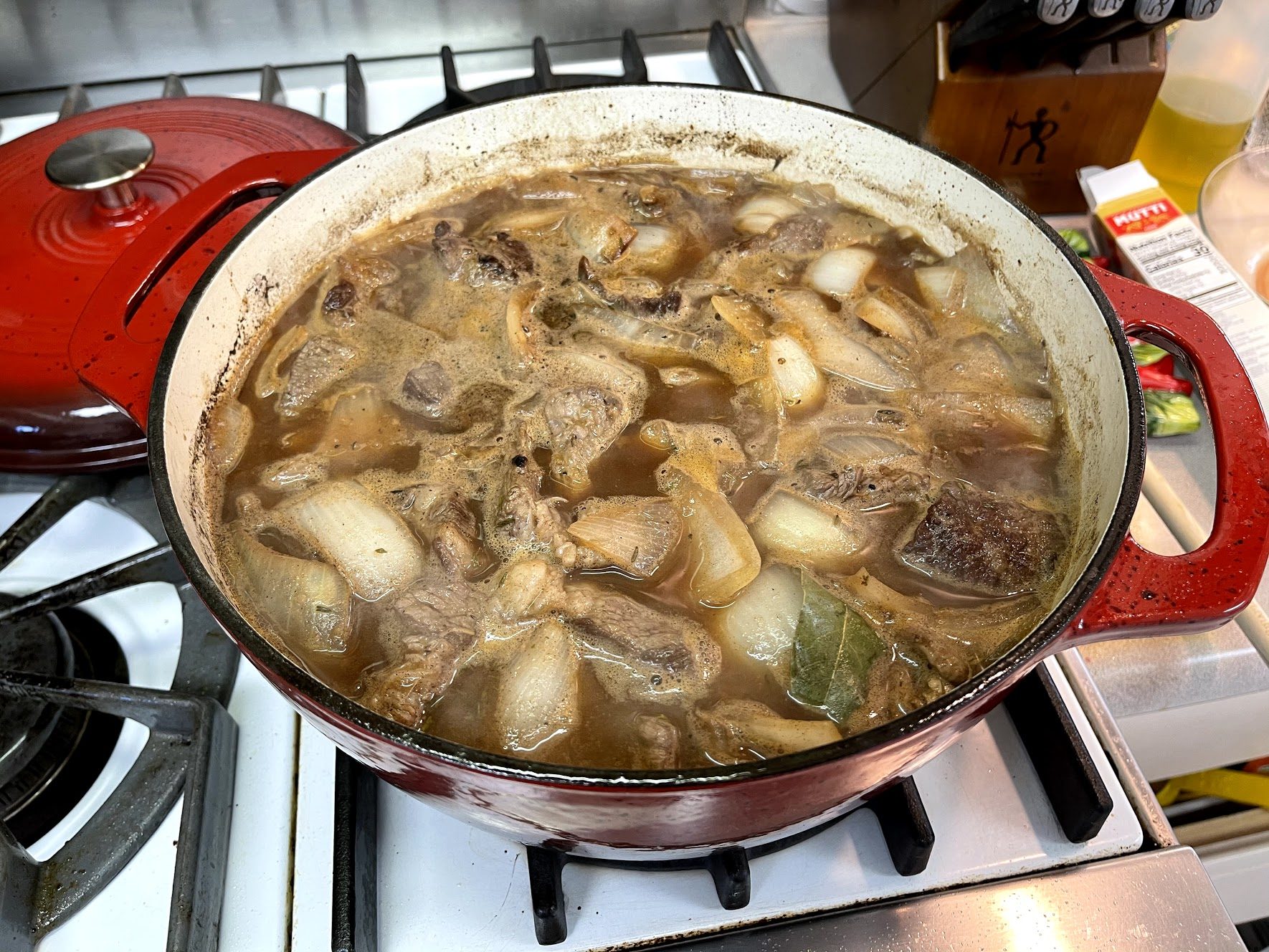 It cooks until the potatoes and carrots are done.

Time to come out of hiding and be sat on the stove to ladle into our bowls after the appetizer! 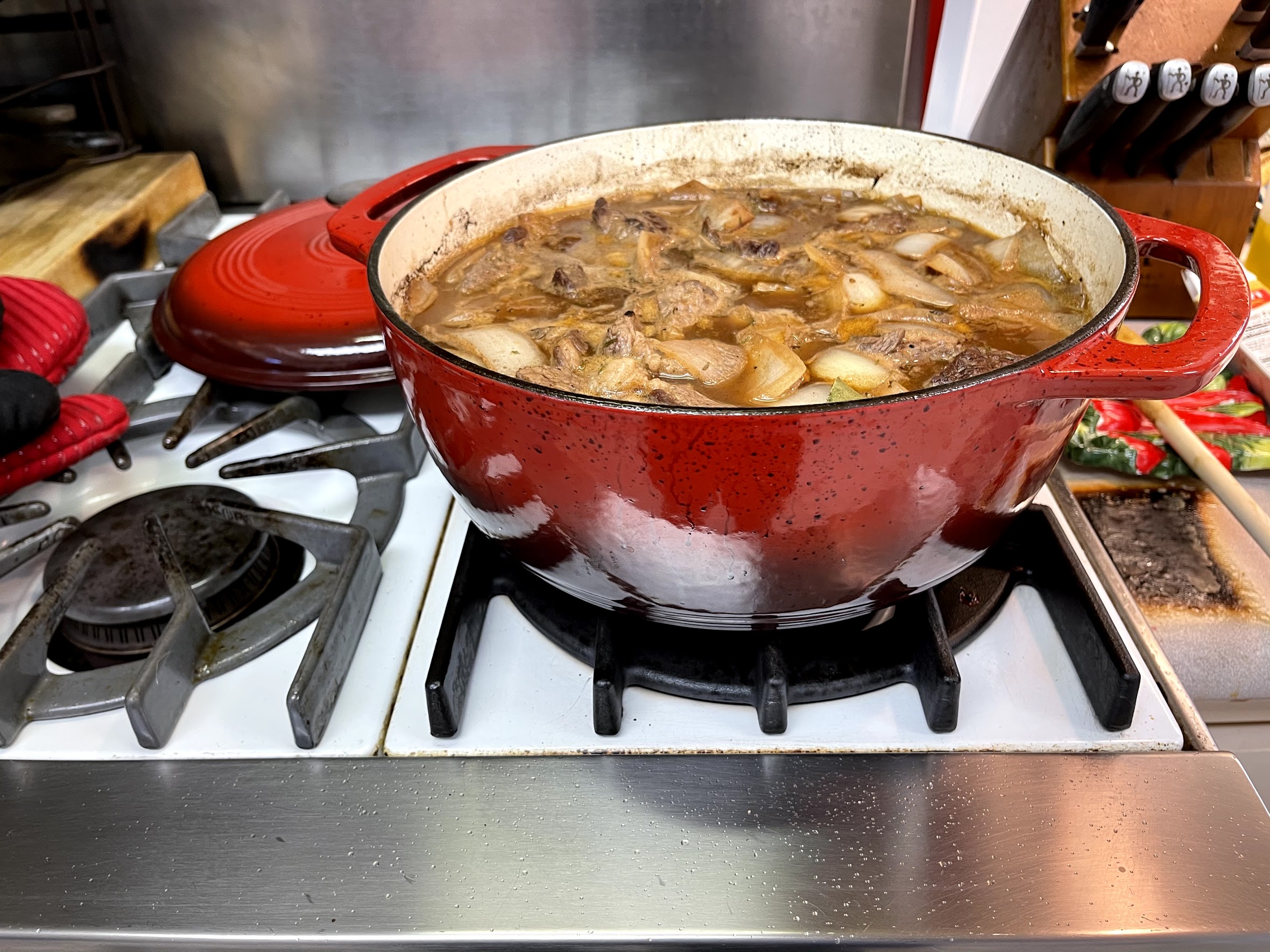 Check the carrots and then ready to go!

The appetizer I say, no, it is not me.  All I need now is my beautiful lady, and then she called, “Hey, I am done and heading to your house!”.  Sound the alarm, light up the house, set the table… battle stations, all hands on deck. Oops, jump in the shower, my lady is coming for dinner.

During the day, I told her we had baloney sandwiches. Will she be surprised or not?

Then, all of a sudden, I remembered the cartoon showing a wife, meeting her hubby after a hard day at work, at the front door naked with a martini glass!  “Why not?” I asked myself. Then I remembered what I looked like in the mirror and did NOT want to shock Mary too much!  So I did the next best thing, I found a formal apron and got a glass of wine ready.

Well, I answer the door; Mary takes one look and cracks up, then screams, drops her briefcase, does a 180-degree turn, and runs back to her car.  What did I do? 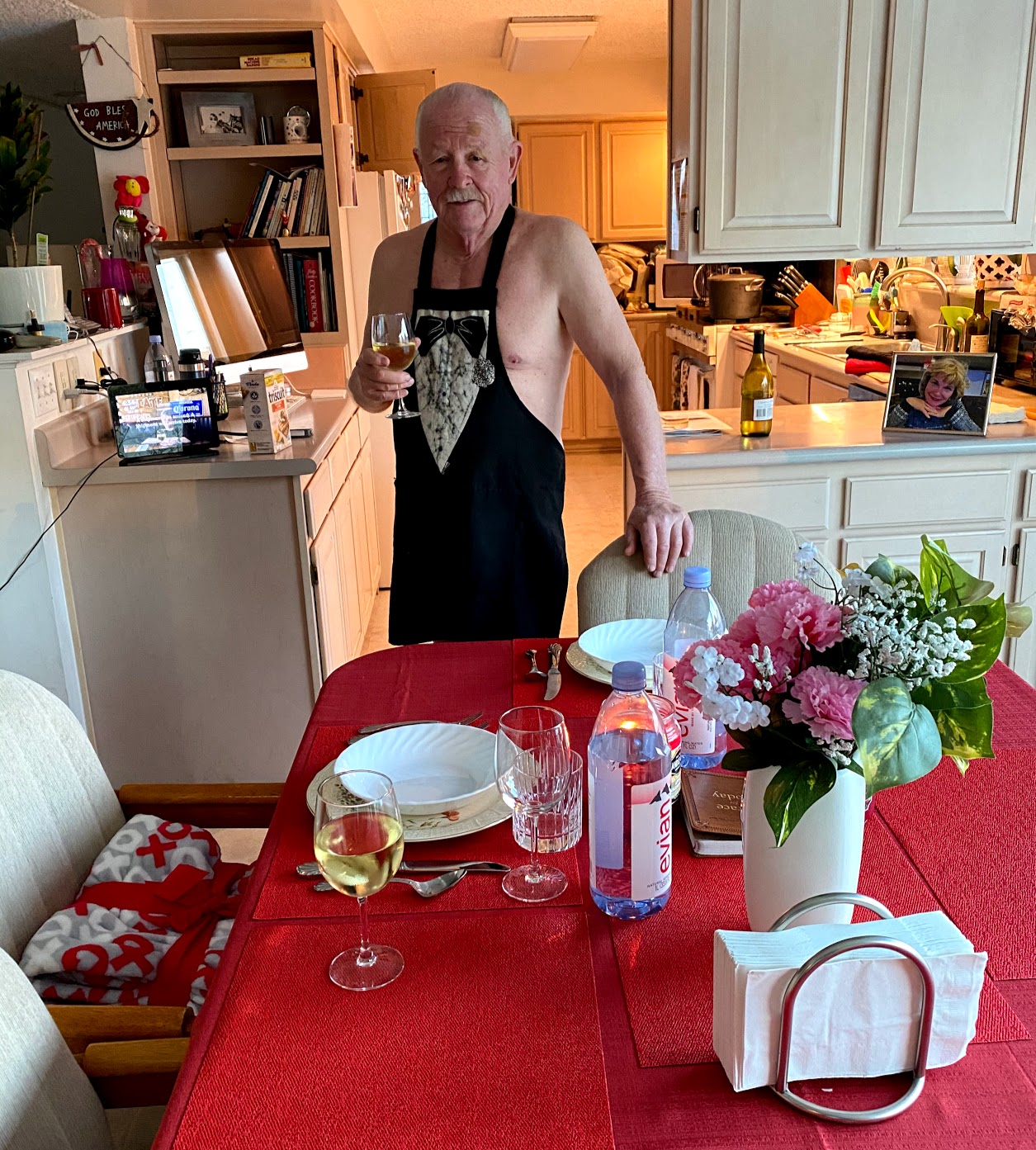 Oops! I should have known; Scout was hiding on the corner with his paws over his head!

Why, I asked myself,” I feel a slight breeze when I served dinner!”.  I had no idea my apron was a little short. I served dinner in my cooking uniform.  The artichokes were amazingly meaty and we really enjoyed them.  I sashayed over to the stove and served up heaping amounts of stew’ I worked on my sashaying all afternoon, I had it down to a science. 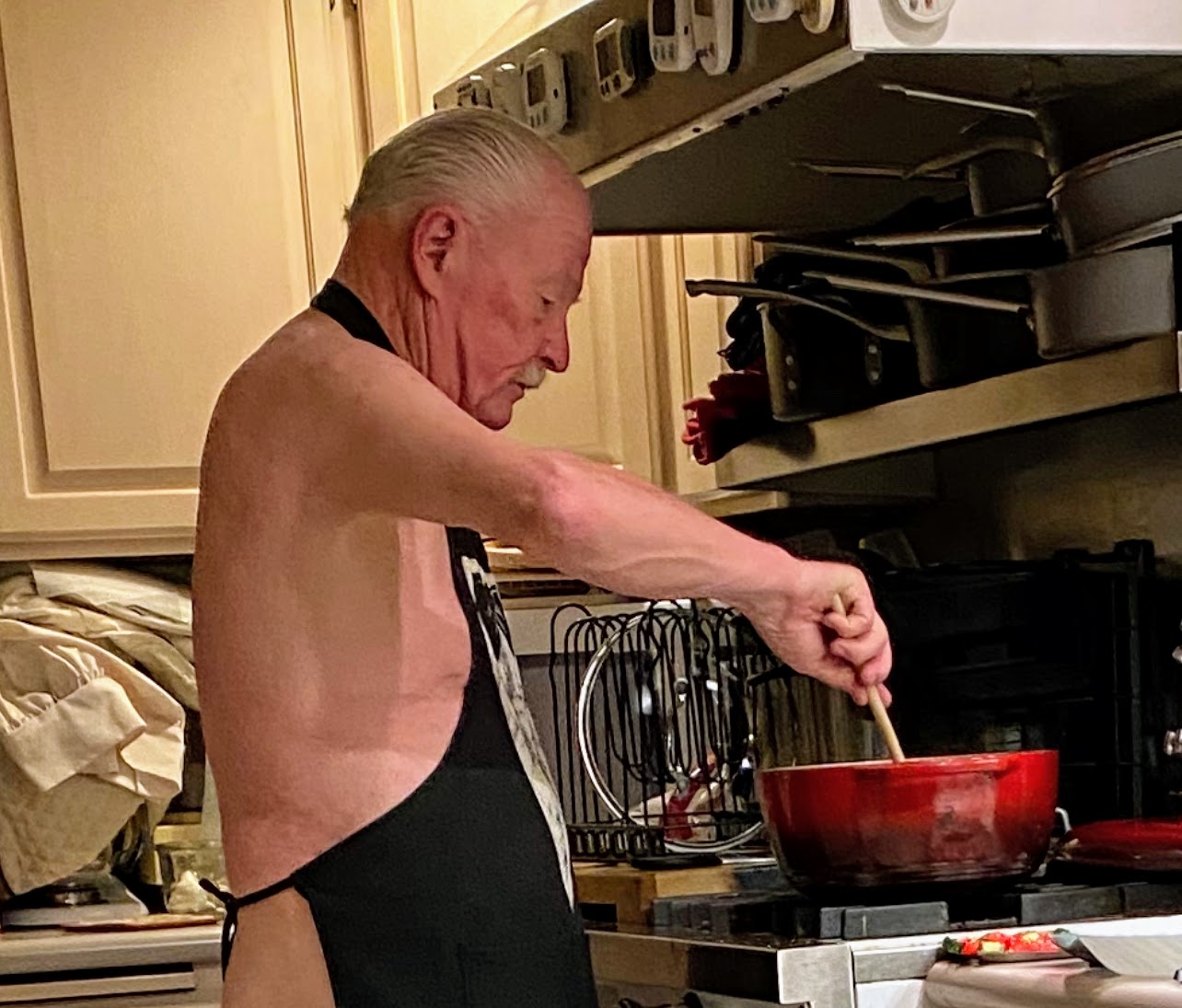 Mary complimented me on my stirring skills1 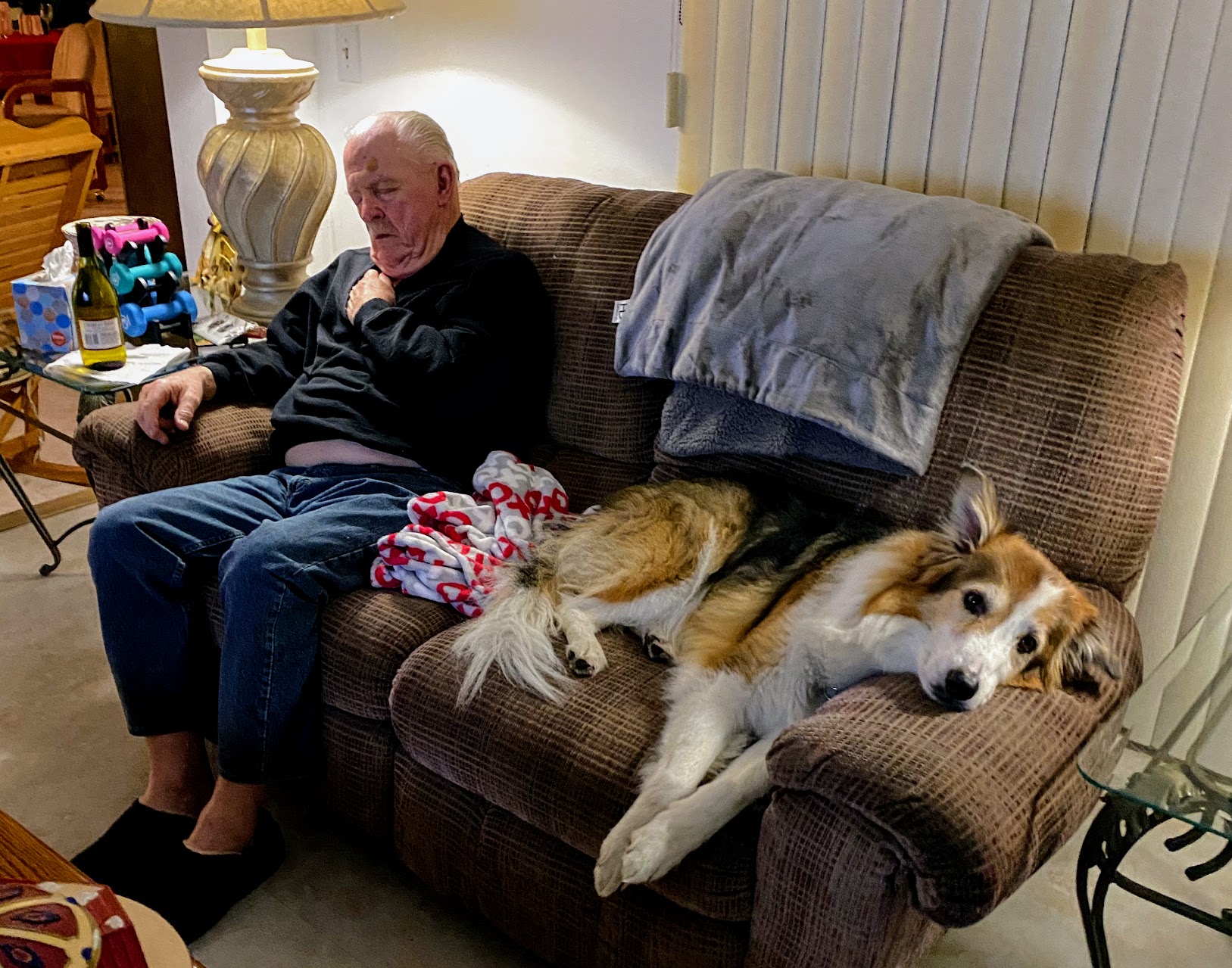 Scout and I watch Two And A Half Men.

We had a delicious dinner and the artichokes were amazing.  The meat was so very tender.  I made enough for six people and we had four containers remaining.  I must say my attire was a little risque so I had to turn up the heat a bit.  We enjoyed watching  Two And A Half Men.  Mary thought it funny that us guys could watch TV with our eyes closed.

Sleeping was good as the dinner was quite filling.  I think it was the fresh-baked bread that did me in.  I had strawberries and fresh whipped cream but alas, that will be for another day.

Mary headed home about 9:00 PM and Scout stayed with me.  We didn’t want Precious, Mary’s car, to get too much doggy hair.  Besides, I will see Mary early in the morning as we have chores to do.

We crashed early this evening because we are going dancing tomorrow evening!