The First Work Day Of The Week, Bah! Humbug!

What’s it called when you put a cow in an elevator? Raising the steaks.

I woke up early as I had to practice for my heart-related tests I was going to take at 1:15 PM.  To get ready for it, I washed some dishes, searched for science projects in the refrigerator, made a list of goodies needed for the pumpkin carving party, and sat and worried.

What is the doctor going to tell me?  Probably something like, “Paul, your heart is just fine, but you need a body transplant!”  Oh, dear,  what can I do?

Is the doc trying to tell me something?

Well, on a serious note, Miss Mary came with me, and being an MD, she could translate my doctor’s mumblings.  He basically said your cholesterol is a little high, and we need to clear out the grease from around your heart valves!”  I envisioned a steam cleaner like to clear driveways with being the tool of choise!

He also said, in no uncertain terms, “You are as old as dirt, and what are you doing running around with the beautiful lady?”  Perhaps I made up part of that, but he did say I was old. 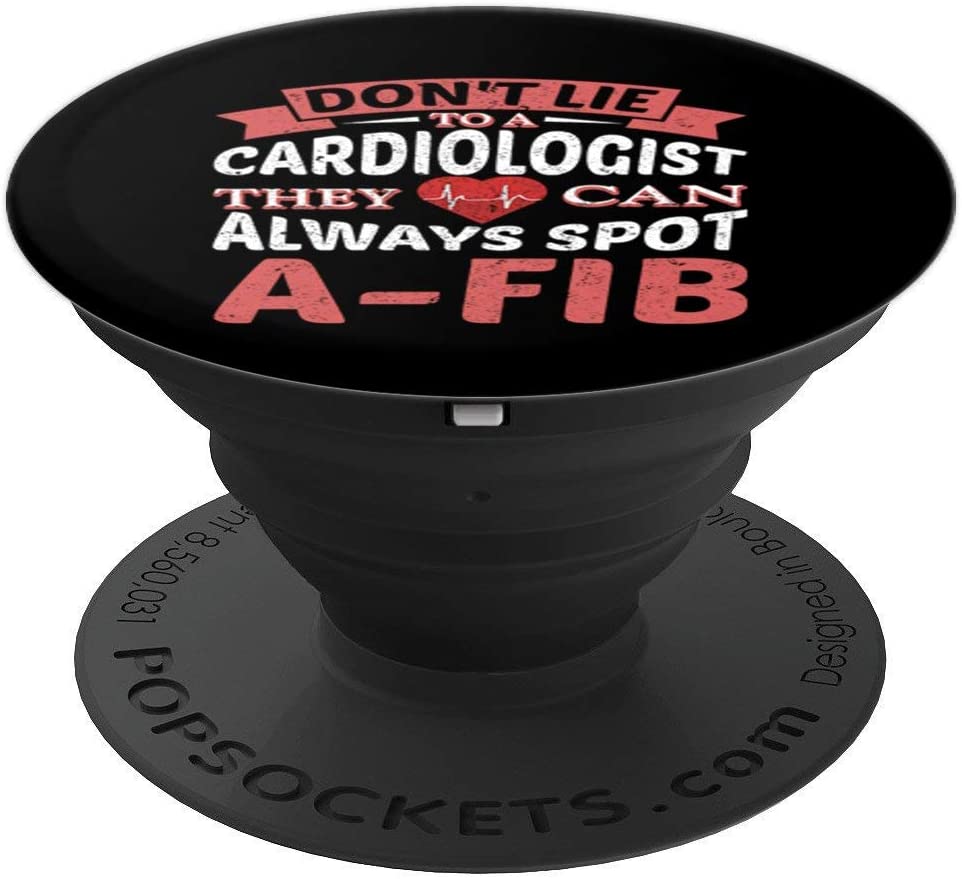 I was going to say we are just friends but….

The news was excellent, with no serious problems other than I am old with a capital “O.”

We returned to my house and had a glass of wine before Miss Mary headed home.  I asked what was for dinner and got a standard military response:

My standard response was, “Yes, Dear!”

We were planning to make Calzones this evening, and Mary suggested bruschetta as an appetizer.  Mary asked Diane and David to join us for dinner, which was an outstanding idea.  David and Diane have been friends with me for several years and with Mary for over 236 years.

When I got to Mary’s, we opened one of the Halloween puzzles and started to set it up!  If we don’t start now, we will not be done by Haloween. 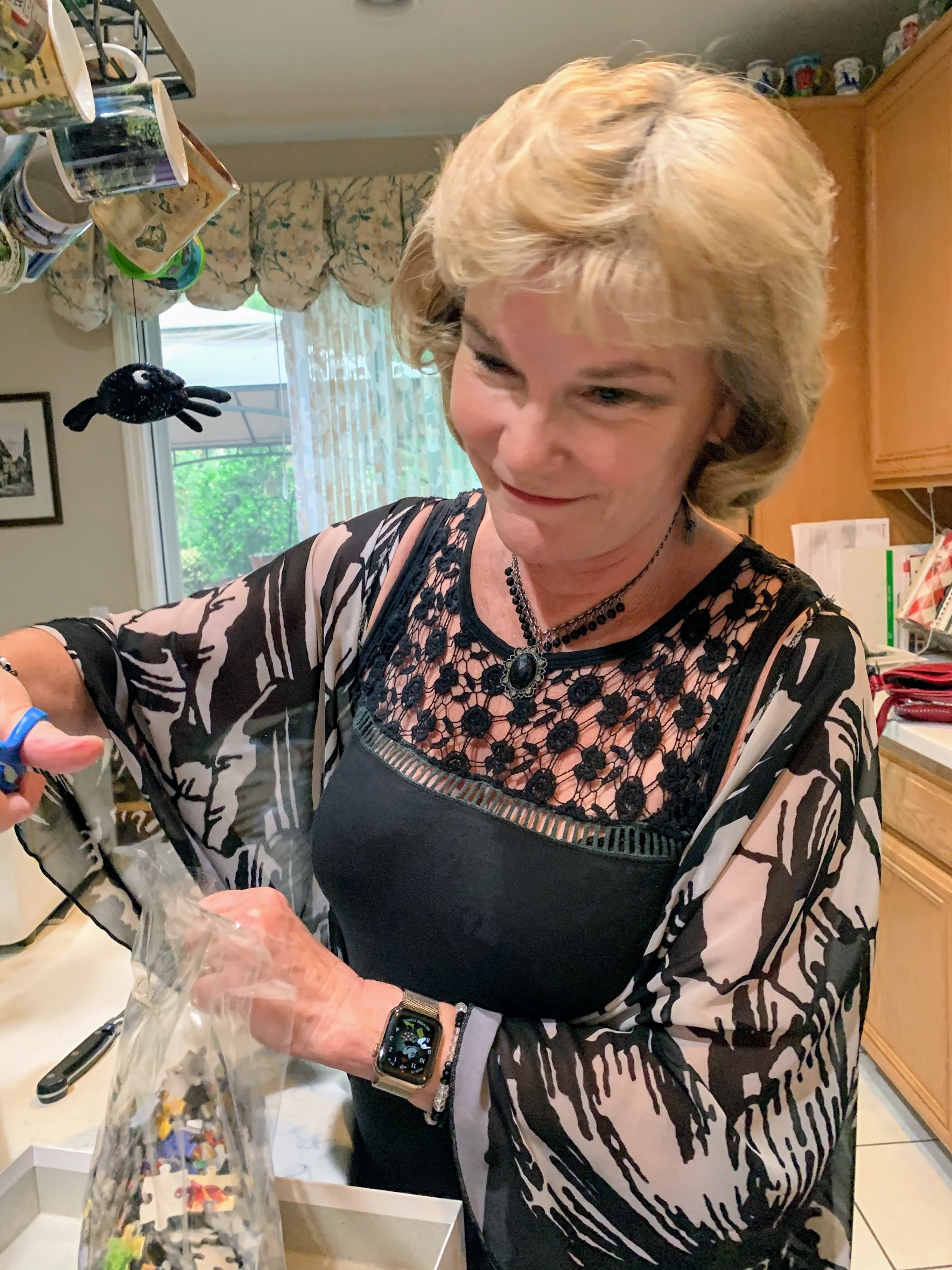 She wanted to count all 550 pieces; we decided to trust the company!

Out of the box and ready to spread on the coffee table.  This will keep us busy!  Jut remember:

Sometimes the hardest pieces of a puzzle to assemble are the ones missing from the box. 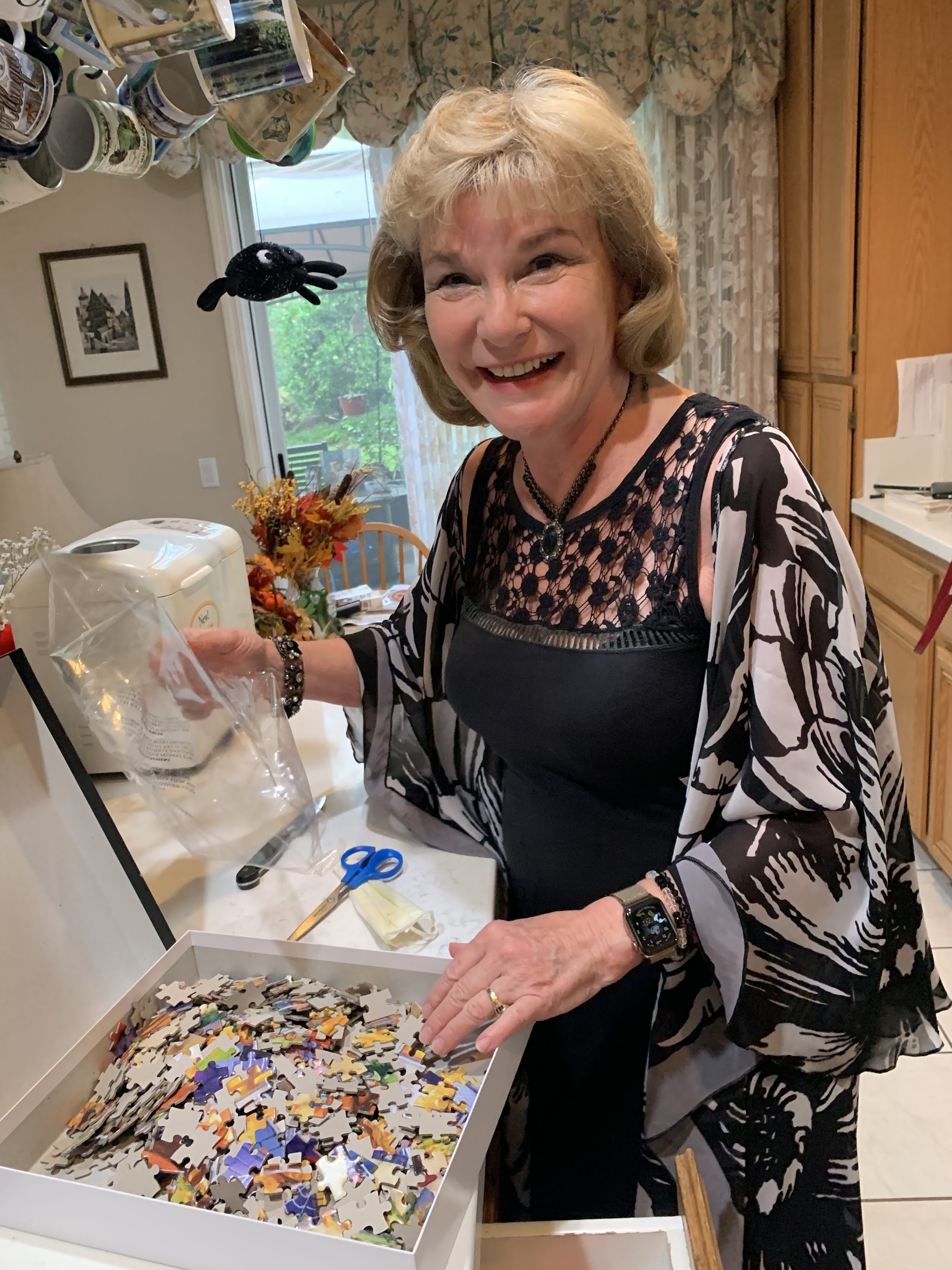 Hang on!  Diane has arrived, and the cooking shall commence with vigor.  Notice the bread knife in Diane’s hands?  I did, and I stood back. I am short enough already.  I took the easy way out. I set the table and cut/washed the green beans fresh out of my garden. 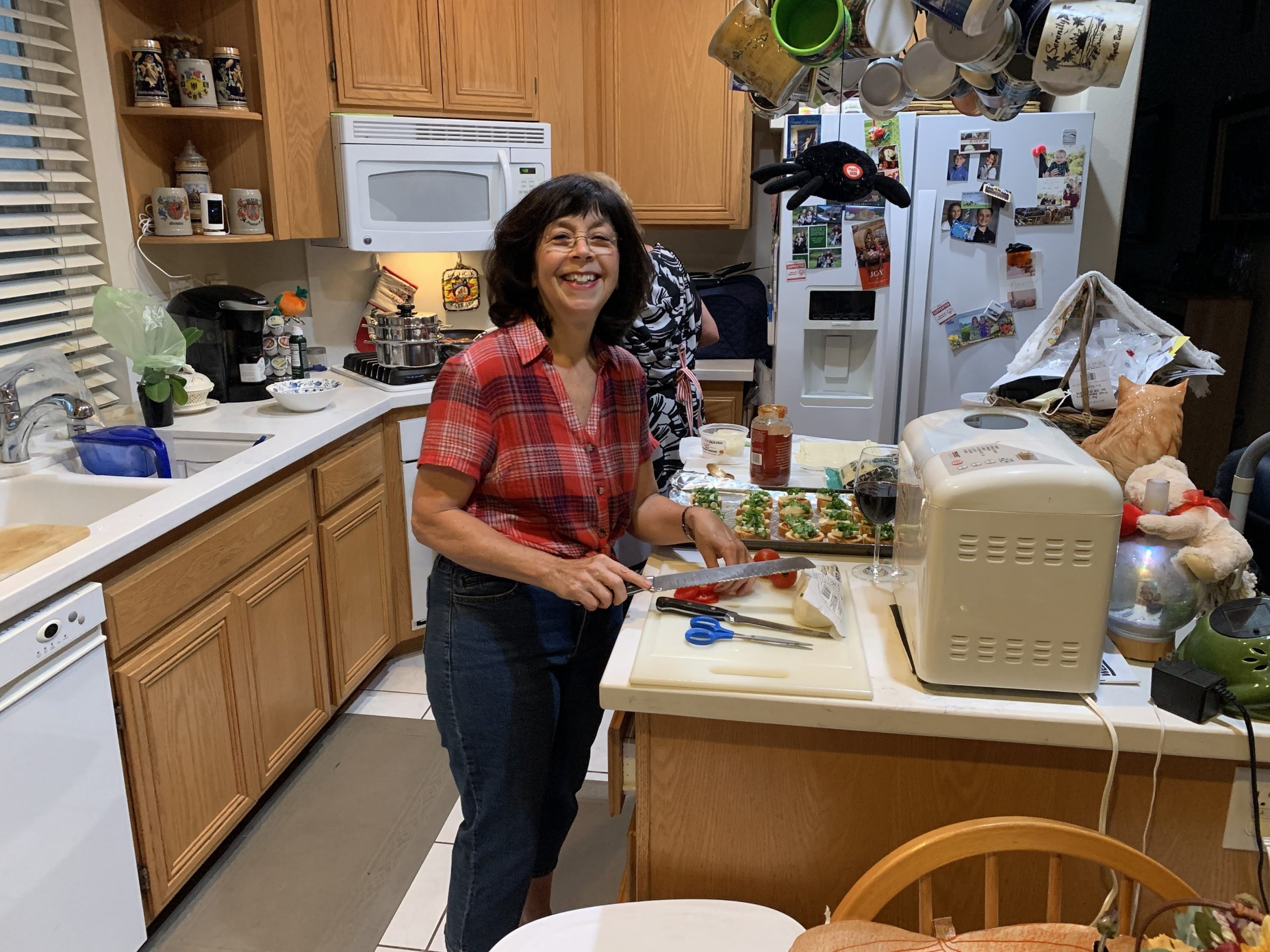 The bruschettas are coming along well, under my careful guidance… which I provided under my breath from outside on the patio so they could not hear me!

Did You Know? Bruschetta also has a long, and I would say noble history. Whether it dates back to the Etruscans or the Ancient Romans, as some purport, one thing is certain: for centuries, it fed laborers and farmers with days’ old bread. It served both as a hearty snack or meal for those doing hard manual labor and as a way to salvage bread that had gone stale. This might not be the loftiest manifestation of what has become a culinary genre all its own, but it is surely the most fundamental. 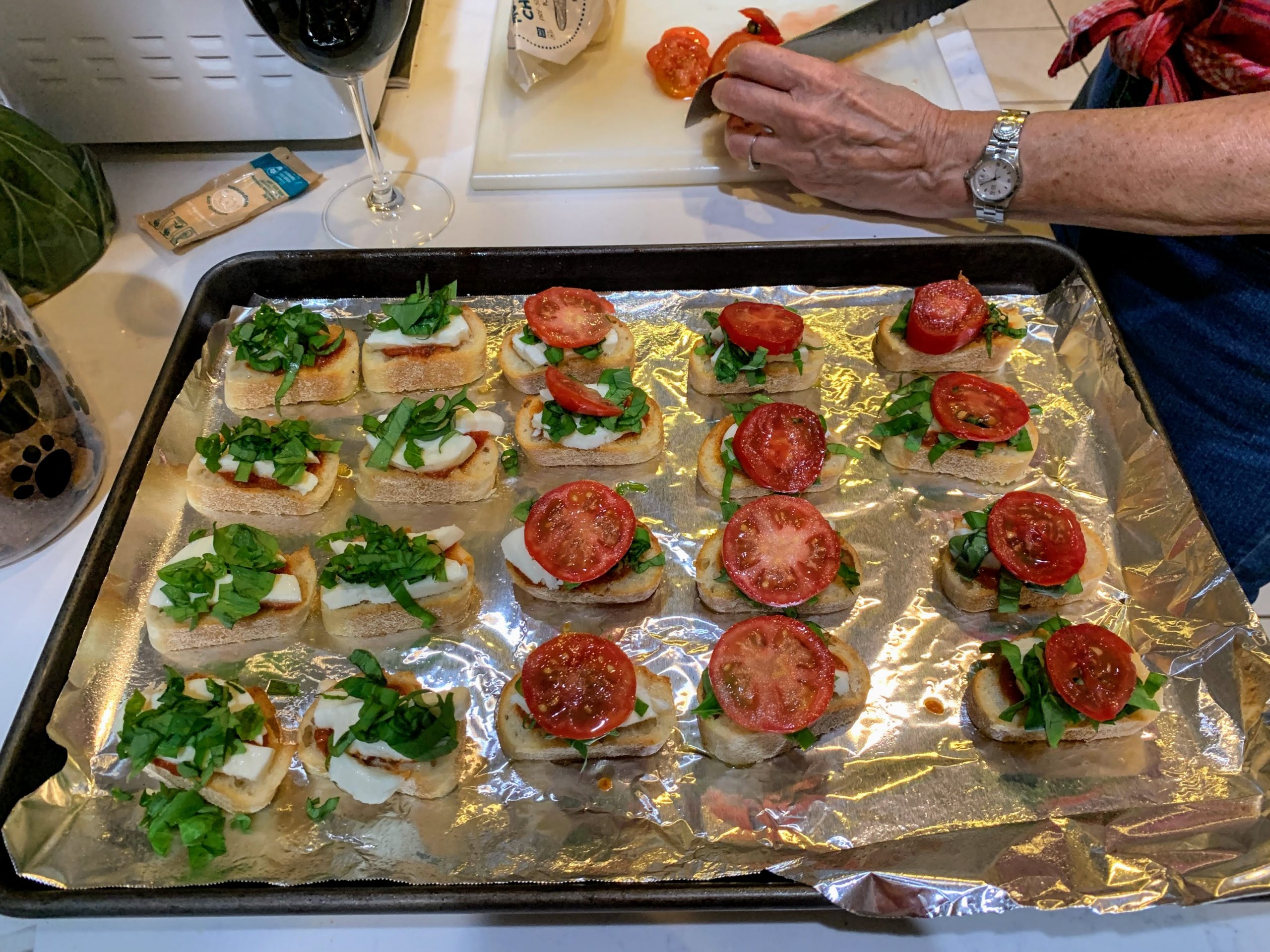 Bruschetta is heading into the oven, which is set at 950 degrees!

The smells emanating from this kitchen were driving us menfolk wild!  Scout’s nose was going ninety miles an hour. 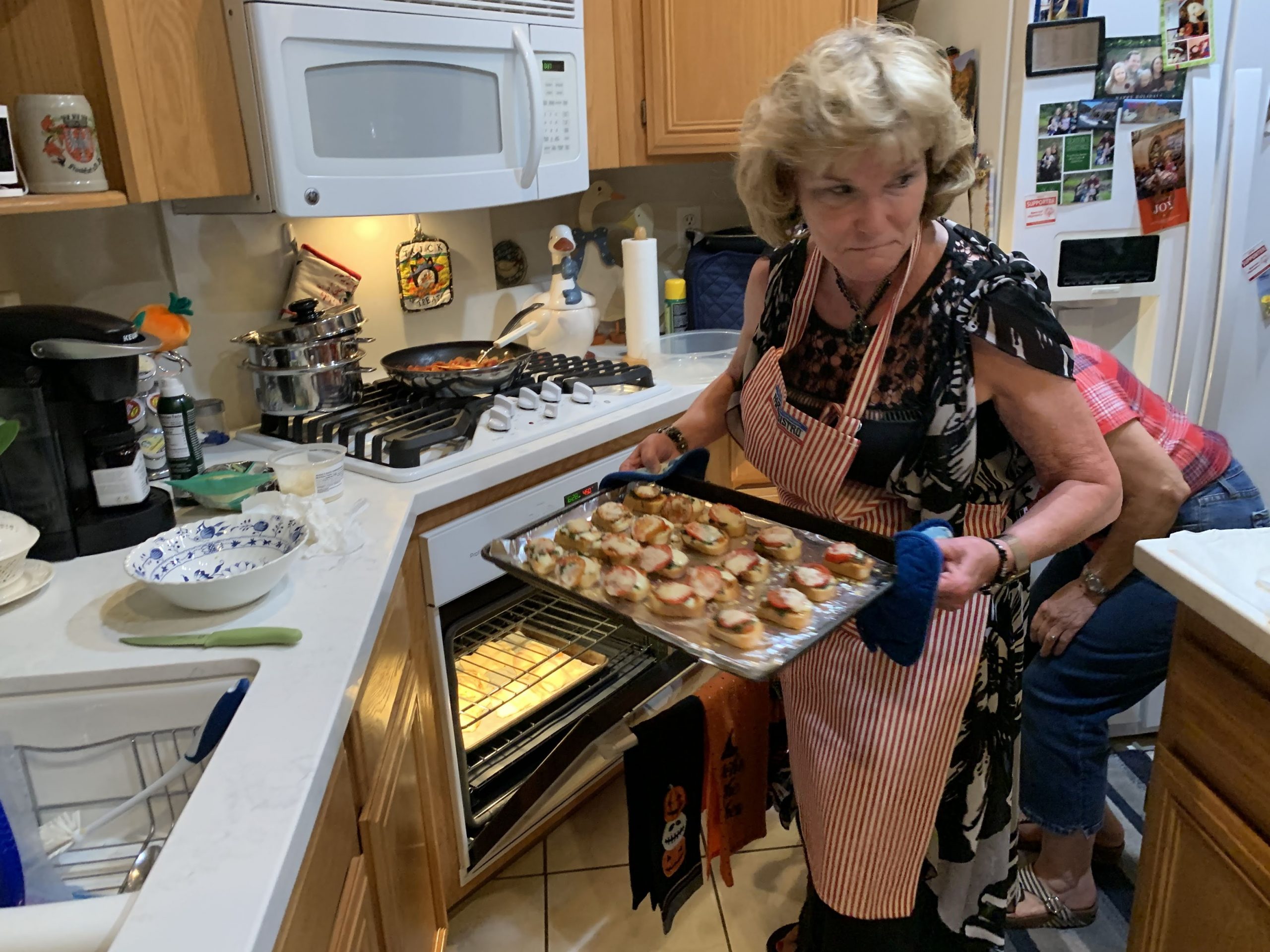 David was reading to Scout about vinegar.  I think Scout fell asleep after the second page of the reading. 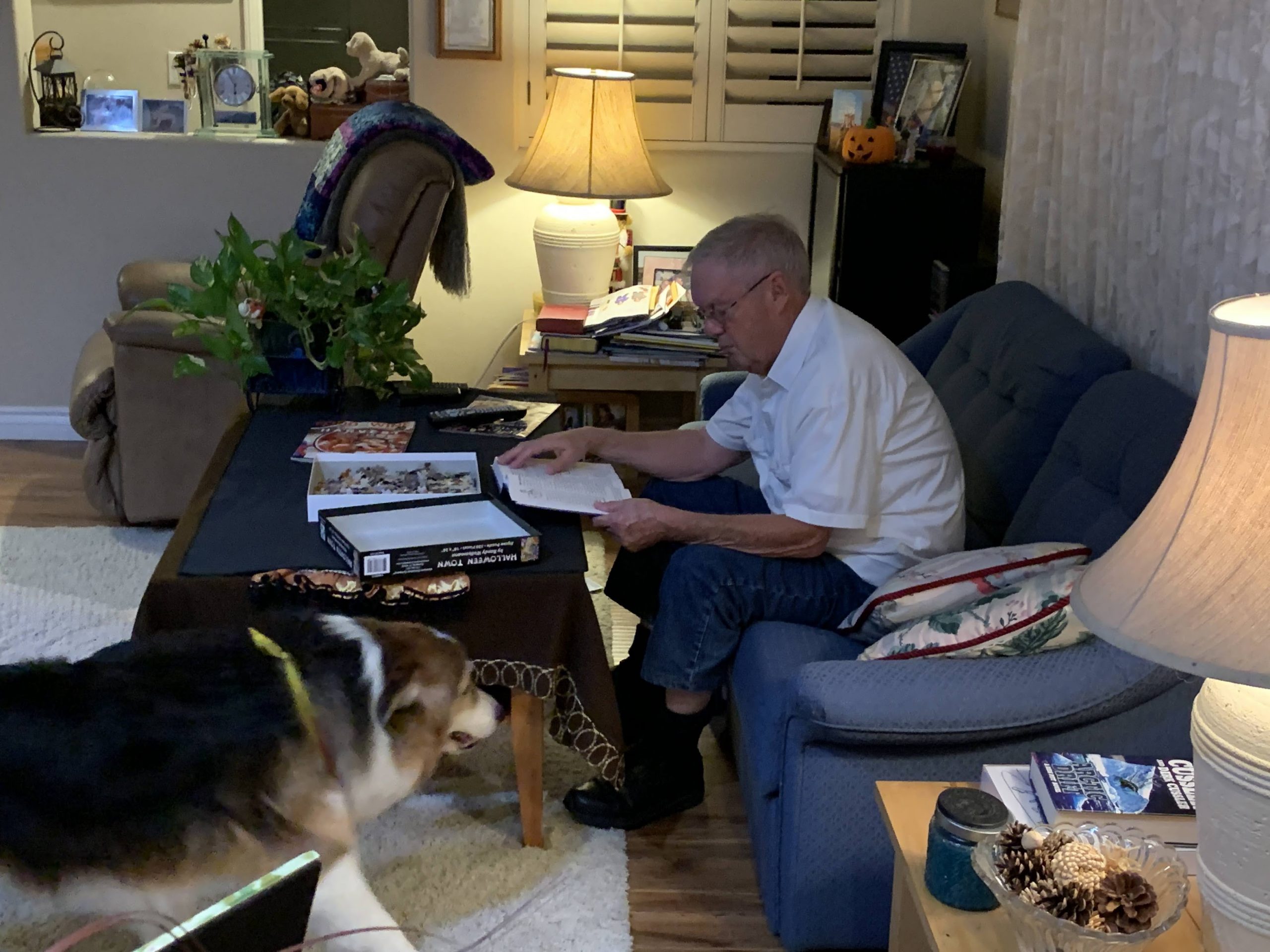 The main course, calzones, stuffed socks!  Mary had the stuffing going when I arrived, and it looked fantastic.  It simmered for an hour, and all the flavors melded together.  I did look carefully into the cauldron and recognized the eye of neut and bat wings.

I was going to offer to stuff the calzones, but Mary knew that it would be something like, “One spoon for the calzone; one spoon full for Paul.”

Seriously, after my doctor’s appointment, I stayed away from the hot cheese. 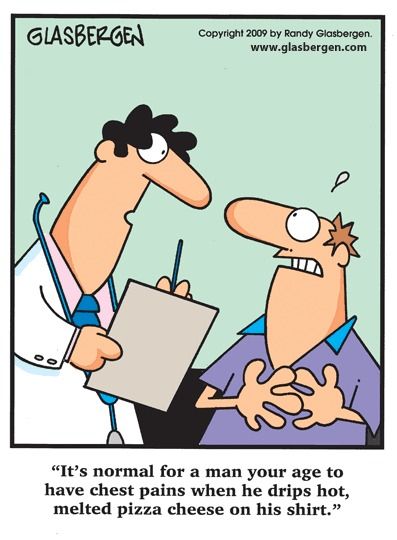 Calzone means ‘trousers’ or ‘trouser leg’ in Italian, but in culinary parlance, it refers to what is basically a ‘pizza turnover’ and is a specialty of Naples. 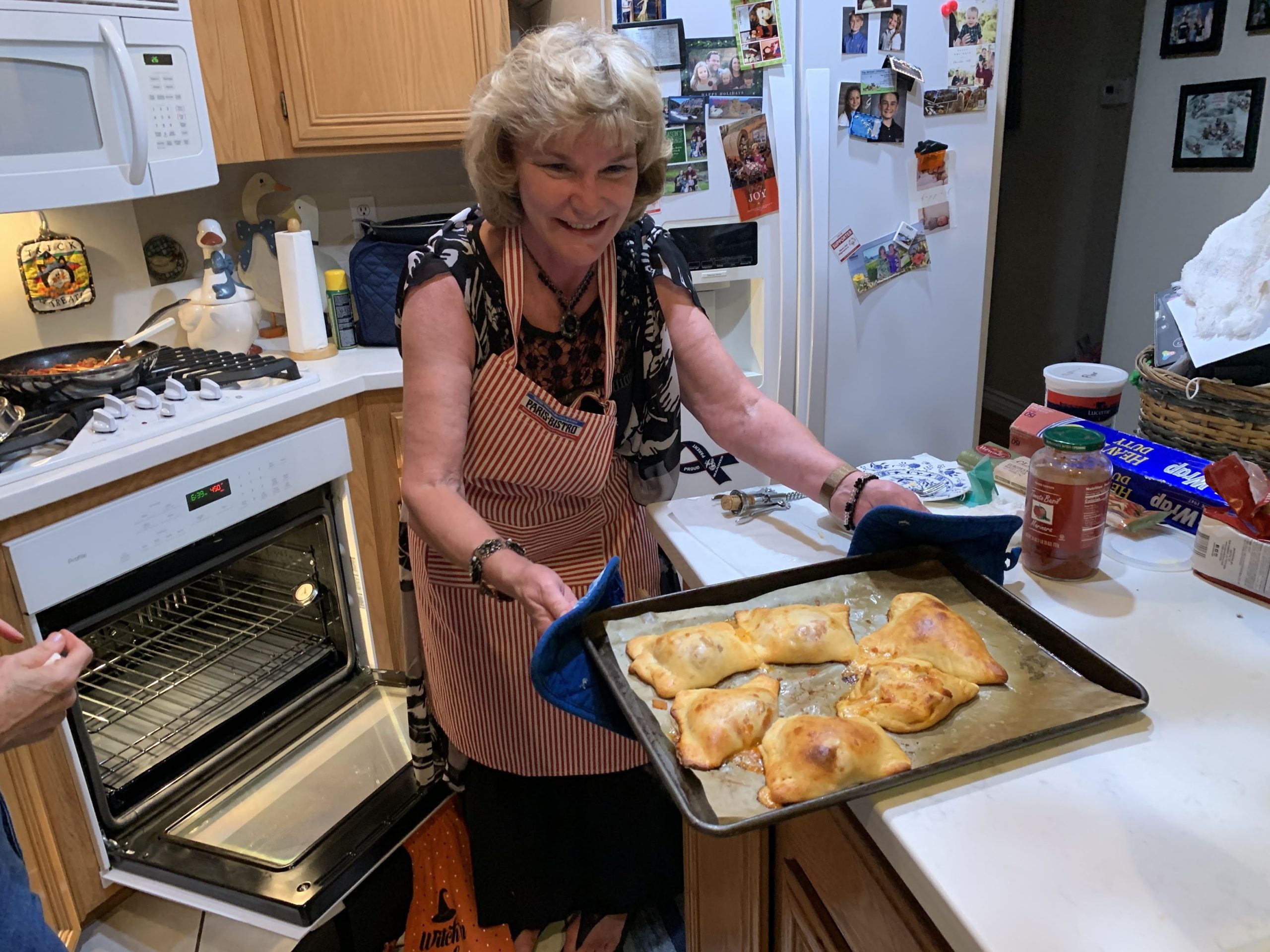 Looks too good to eat!

They were done perfectly!  We plated our food inside and carried it out to the patio.  I was first as I was not trusted around the finished product; besides, no one likes calzones with bite marks in them! 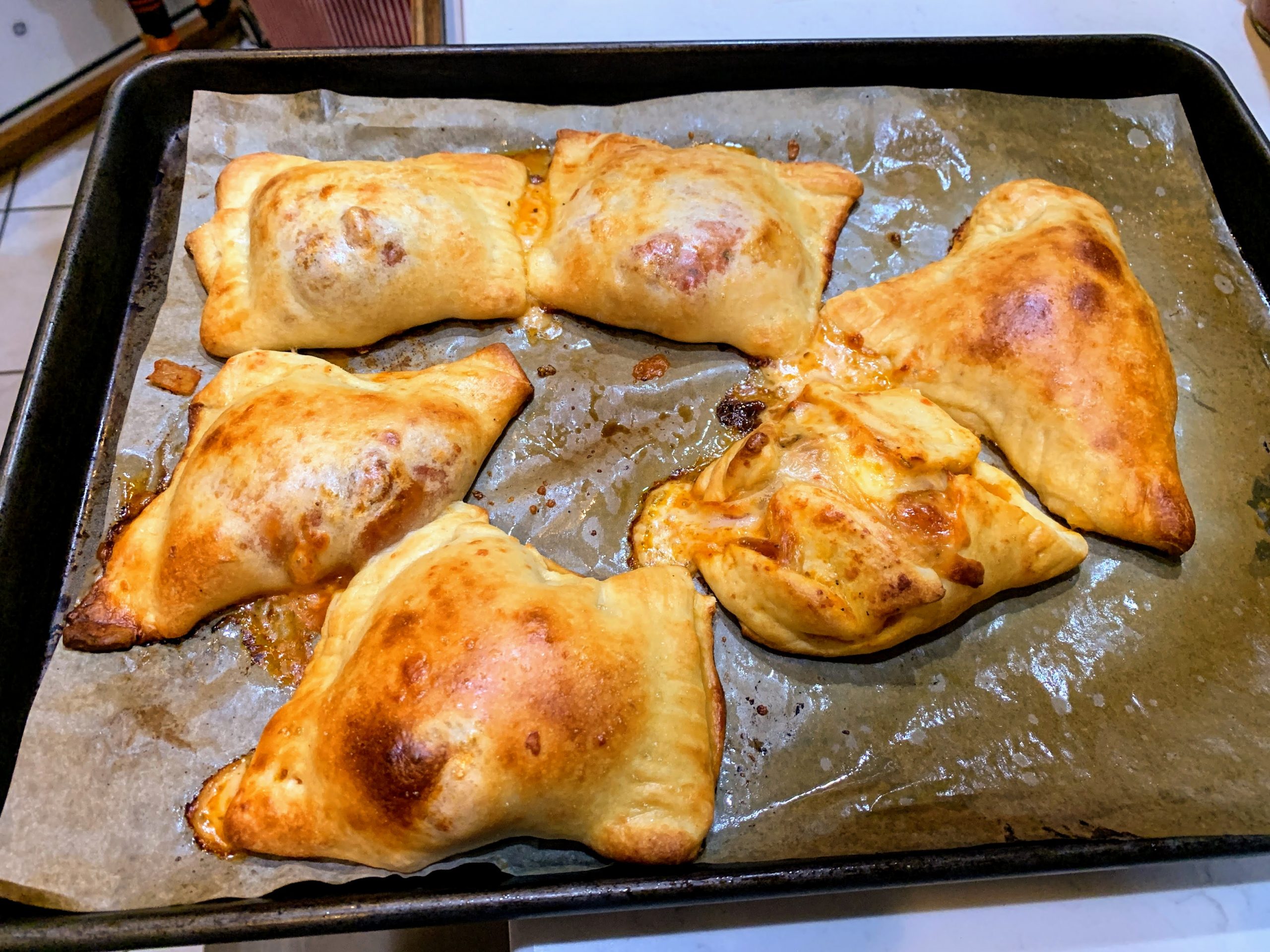 We sat outside and jabbered for an hour.  We have been friends for years, and it was quite comfortable.

Time for cleanup and the three of us had the place spic and span in twenty minutes. Meanwhile, Scout was read chapter two in the vinegar book.  Scout is pretty smart; he found his mommy’s earmuffs and put them on.  What Scout did not know was that David was going to test him on the readings, oh-oh. 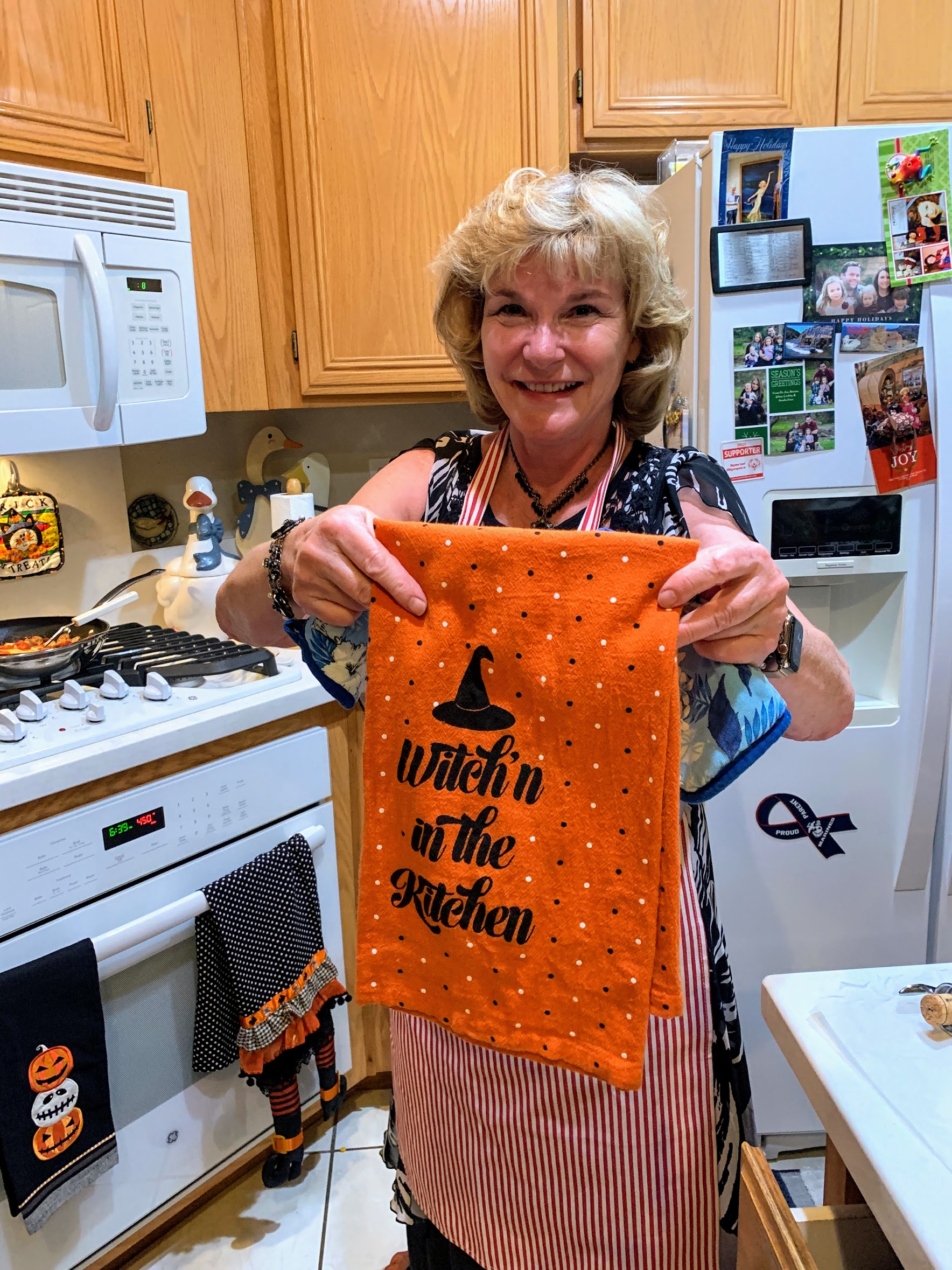 I offered to help, so I made the fatal mistakes of asking, “Where should I put the tomato?”  Plop, I soon found out where they wanted it.  What was not clear to me was the fact they coated the tomato with super glue.  It took two hours to remove the tomato.  Diane and Mary’s first suggestion was to soak my head in a bucket of water for thirty minutes, a potential solution I did not decide to pursue.

I was fearful of driving home and having a police officer look into the car and think I was doing something bad! 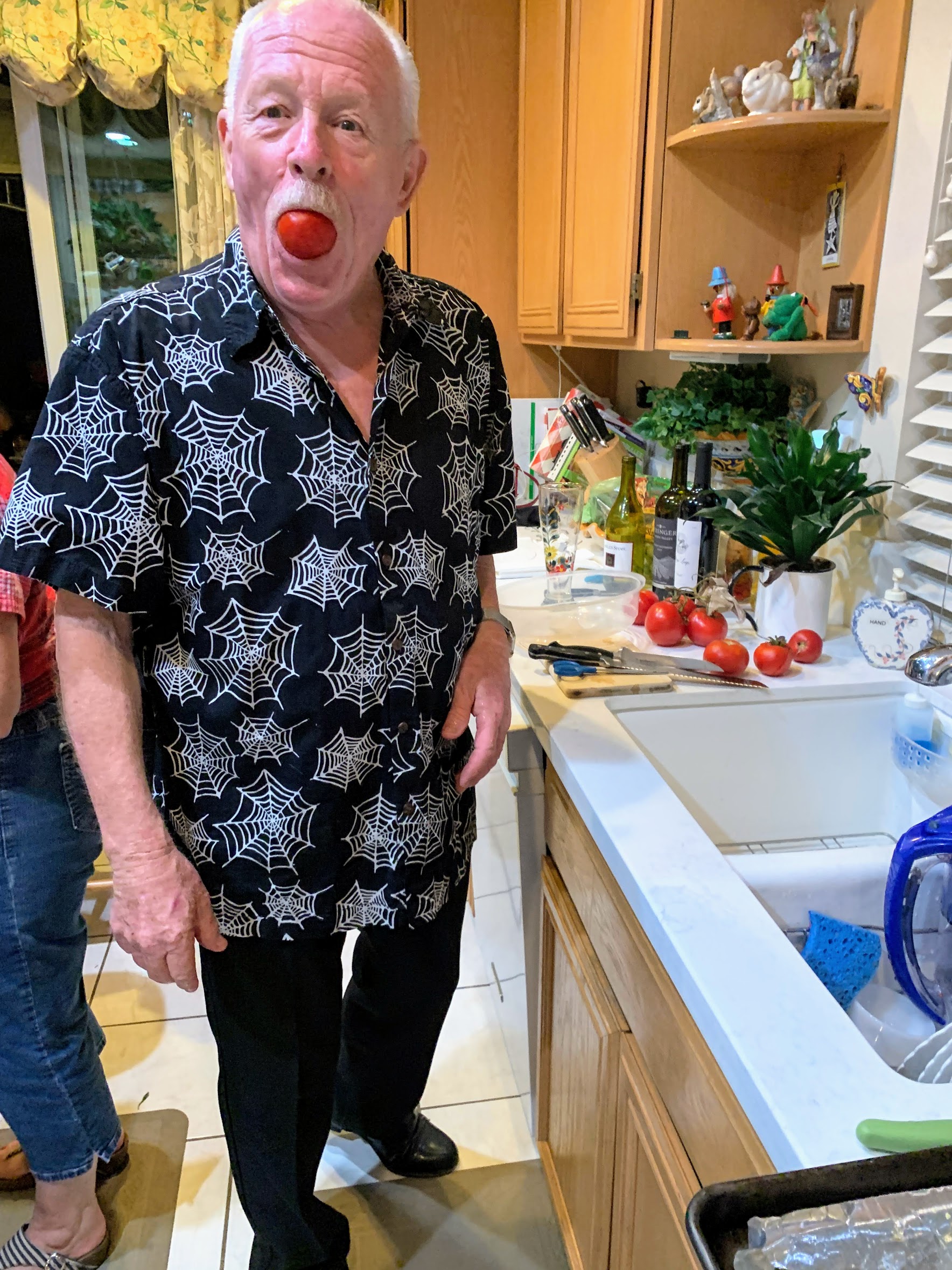 I will never ask these girls where I should put the tomato again!

Diane and David departed, so we set up the Halloween puzzle and watched “Grumpier Old Men.”

We have such fun together.  We watched the outtakes several times because we laughed so hard we could hear the outtakes.

Curfew time, so the Silver Fox and I headed west on the twenty-two.  The tomato finally came out just before I departed.  I no longer had to worry about being stopped.

Just an old retired guy trying to finish out my last years on this planet. I lost my best friend and wife in early 2020. I was blessed again by reconnecting with Dr. Mary Côté, a long-time friend. Mary and I got married July 28th, 2021, and are enjoying life together and plan to spend the rest of our lives being a blessing to our friends and family.
View all posts by Paul →
This entry was posted in Cooking, Food and Wine, Friends. Bookmark the permalink.