I bet the person who created the door knocker won a Nobel prize.

Today I woke up with happy thoughts from last night.  Mary did her magic in the kitchen while I worked in the background. It is a nice way to spend time together.  We are learning to be a great team. 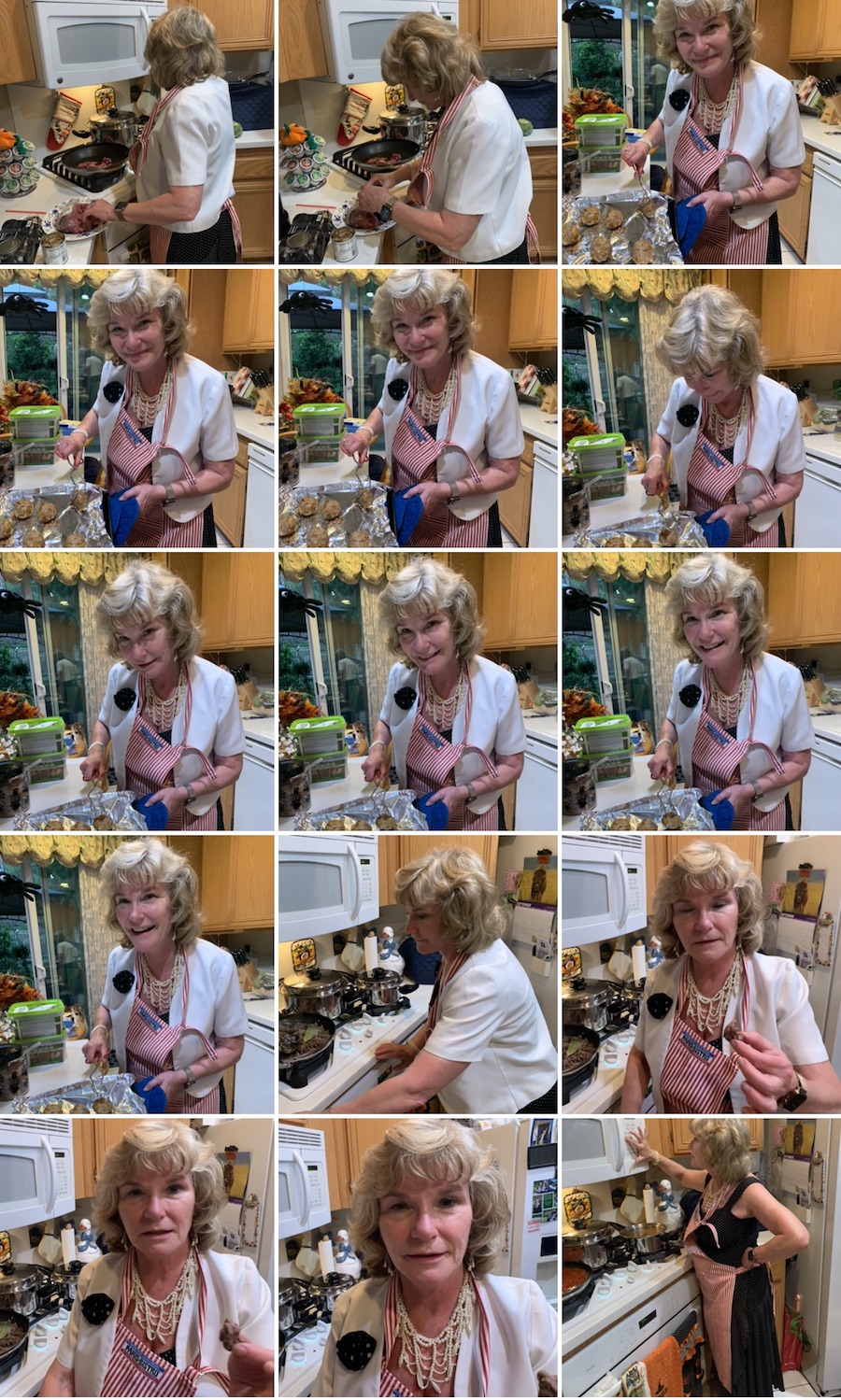 Her kitchen is a happy place!

Today will be a great day because I plan to make it great!  It started well as I went through the house, ensuring that the guys who live here with me  (me and my shadow, great name for a song) didn’t leave too many messes.  Within ten minutes, the place was ready for the cleaning people, but alas, they come tomorrow.  Wow, I am a day early!

I was wearing the wires and recorder, so I was careful and did not do any heavy work around the house. Time for a walk as it is 11:00 AM.

Being very evil at heart, I texted the picture below to Mary, knowing she was surrounded by concrete walls, little examining rooms, and tons of equipment. 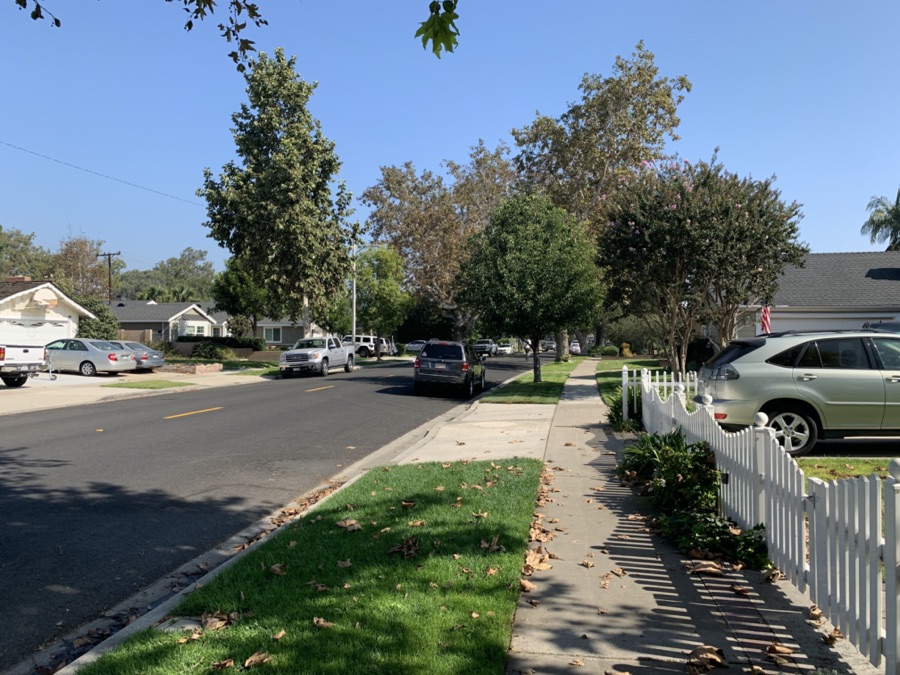 Twas a glorious day in the hood!

Bam! The bougainvillea was rather dramatic this morning, giving a new meaning to the color red. 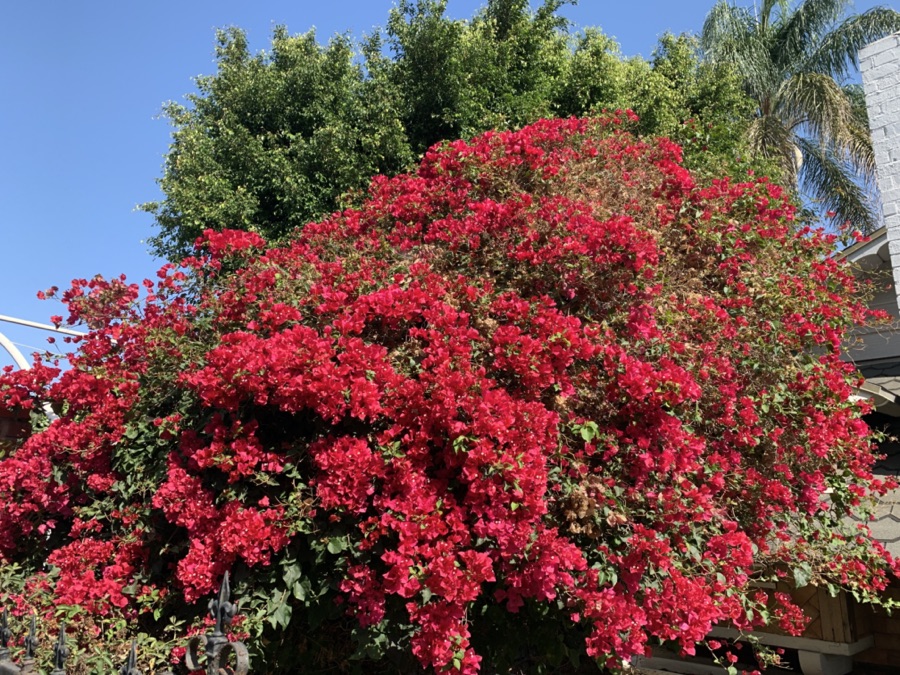 Were the reds redder than usual today?

Did You Know? Red is the color at the end of the visible spectrum of light, next to orange and opposite violet. It has a dominant wavelength of approximately 625–740 nanometres.  It is a primary color in the RGB color model and the CMYK color model and is the complementary color of cyan. Reds range from the brilliant yellow-tinged scarlet and vermillion to bluish-red crimson and vary in shade from the pale red pink to the dark red burgundy.

Red pigment made from ochre was one of the first colors used in prehistoric art. The Ancient Egyptians and Mayans colored their faces red in ceremonies; Roman generals had their bodies colored red to celebrate victories. It was also an important color in China, where it was used to color early pottery and later the gates and walls of palaces. In the Renaissance, the brilliant red costumes for the nobility and wealthy were dyed with kermes and cochineal. The 19th century brought the introduction of the first synthetic red dyes, which replaced the traditional dyes. Red also became the color of revolution.

Then it happened, I was accosted by a giant spider who was lurking just above the sidewalk waiting for some poor innocent person like me to meander beneath his cleverly concealed trap!  I fought him off with all the energy I could muster.  With a burst of life, I escaped his clutches, and I heard him say, in spider-talk, of course, “There will be another day when you least expect it!” 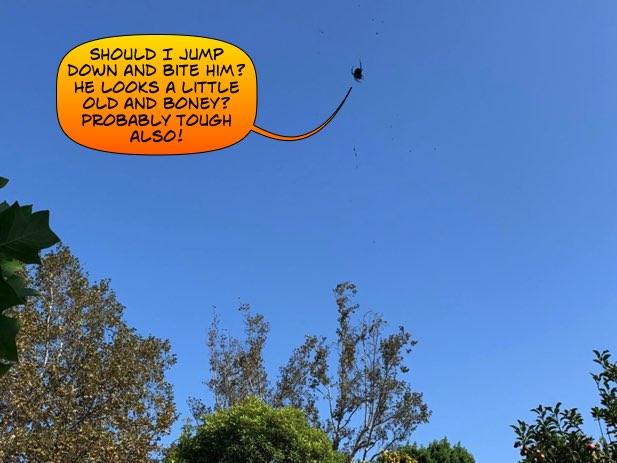 Danger lurks along the walkway of life.

Narrowly escaping certain death, or at least a minor spider bite, the journey continued. The trusty iPhone captured a close up of that little devil; do NOT be fooled by his friendly looks. 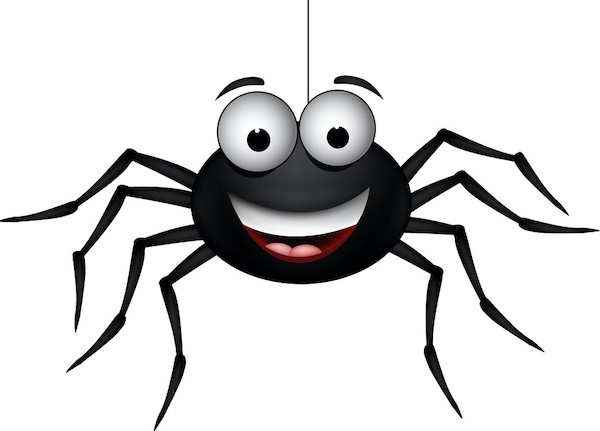 As fast as my little feets would move, I scurried down the street towards our resident artist!  Ah-ha, something new at the artist’s abode.  The pumpkin from a palm tree?  So very creative she is and always changing things around! 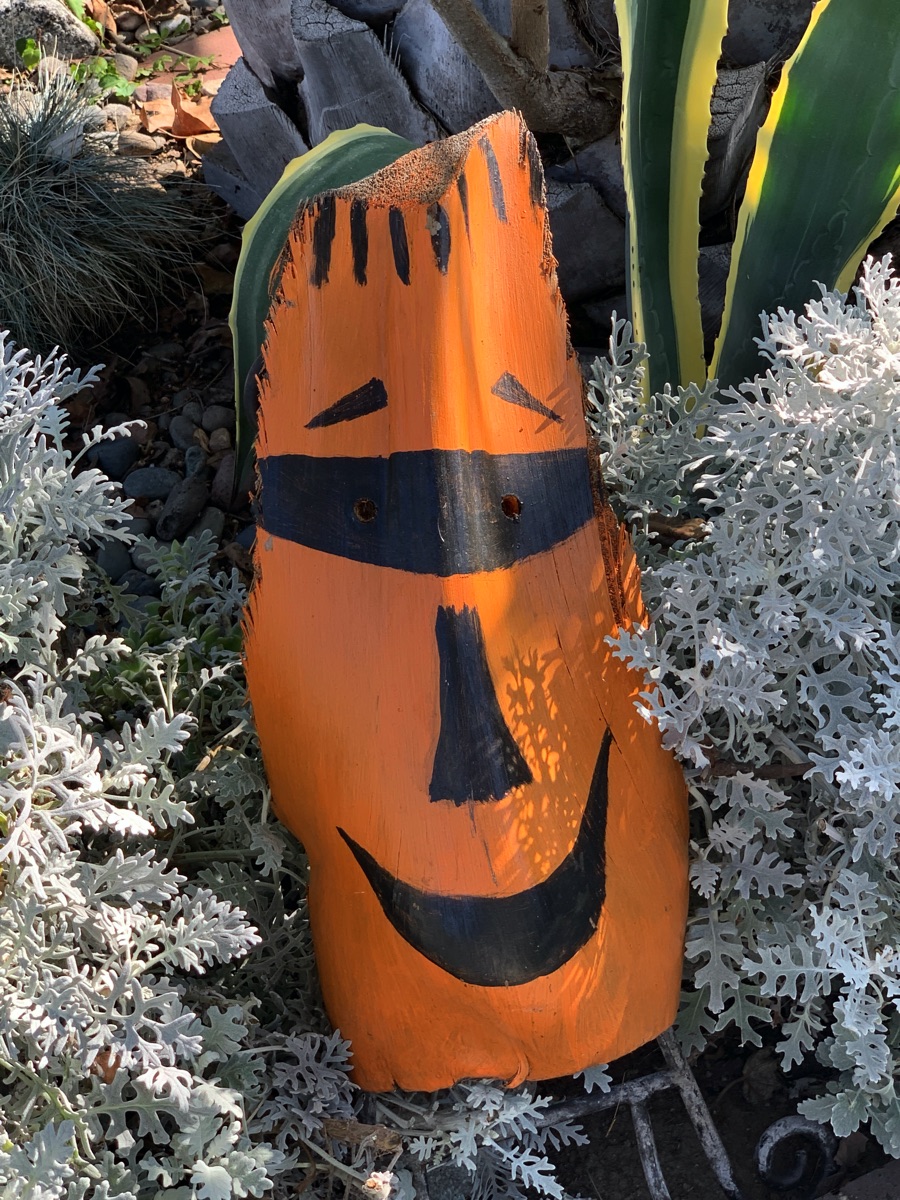 My artist has been busy again!

Many houses are starting to put up the Halloween decorations like it is getting back to normal. 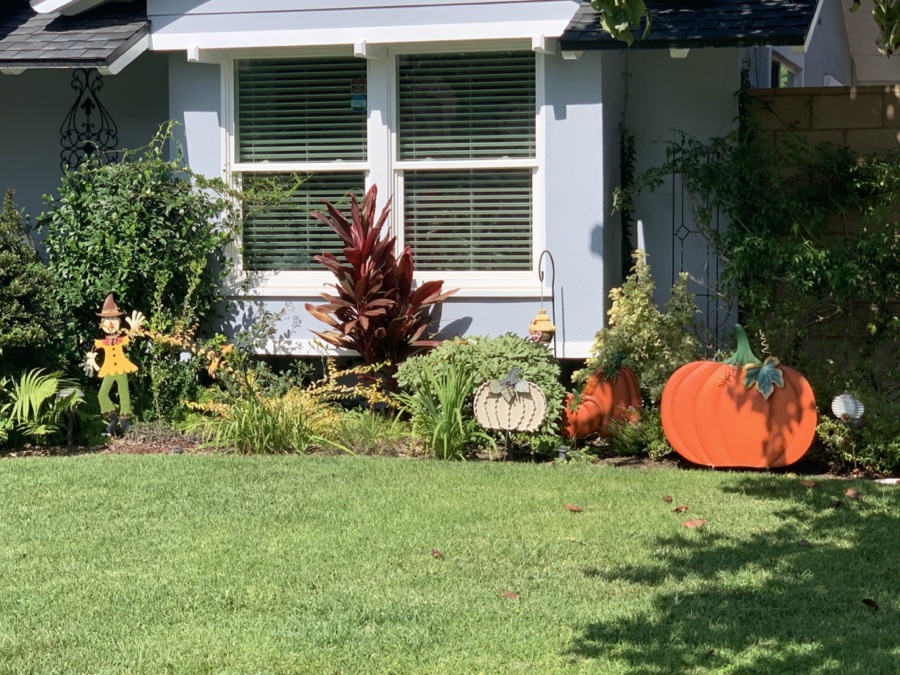 Decorations are beginning to appear!

At the end of the walk, I covered about three miles and over 5,000 steps.  While fumbling with my trusty sidekick, Mr. iPhone, I somehow turned off my pedometer?

Errands were next!  I attempted to go to Verizon and change my phone from AT&T as AT&T does not reach Mary’s home.  There was a line outside, so I ceased that thought when the line ceased to move, and it was in the direct sun, maybe tomorrow!

Then to Trader Joe’s for some Two-Buck-Chuck, which I find as good as Kendall-Jackson!  Returning home, I stopped by the market and got some goodies. 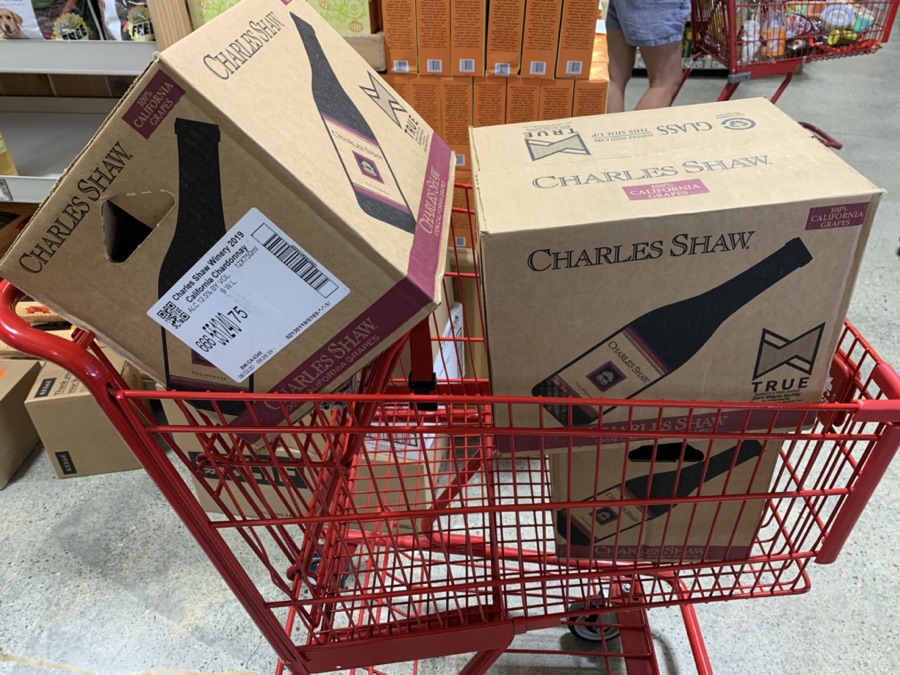 There will be a hot time in the old town tonight!

A quick text to Miss Mary and I had a few more items on my shopping list.  There is an advantage to dating an old retired guy after all!

Time to take off the harness and all the sensors; besides, they began to fall off around 3:30 PM.  I packaged up the equipment, hit the shower, and headed to the doctor’s office.  We set up two more tests, which will complete in the next two weeks.  Mary has graciously offered to accompany me when I see the doctor for his findings.

We planned to watch the debate, and today is a late day for Mary, so I suggested a Veal Piccata run!  Renata, here I come. 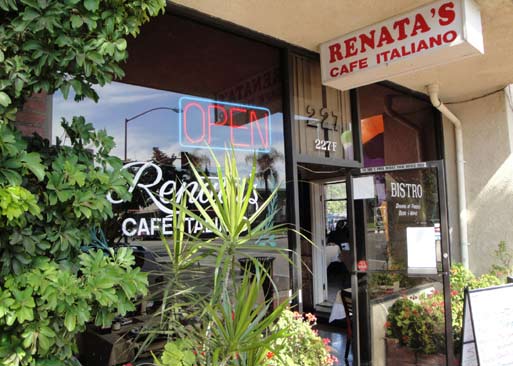 Near the traffic circle in Downtown Orange

No cooking; just plating!  The plan worked out great.  The dinner was plated, salads readied, wine poured just as the “Nightmare On TV” began. 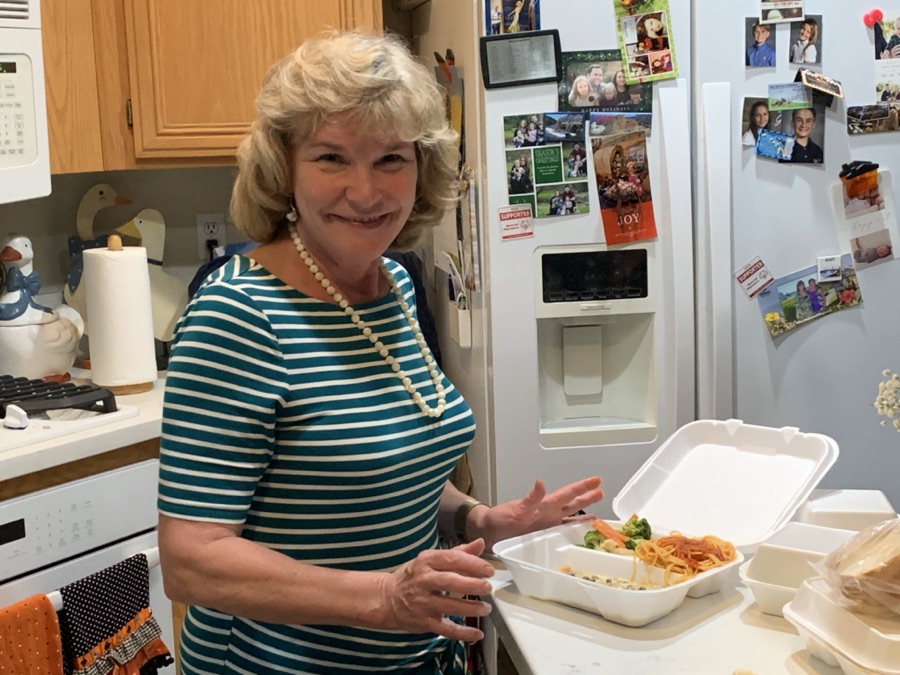 Container to the plate, we are ready!

We listened to these two people for about fifty minutes (when you could understand them) and decided enough was enough.  It wasn’t enjoyable!  It reminded me of two little kids on the playground.  I kept thinking, what is Rush going to say tomorrow?

We cleaned up from dinner and watched The Marvelous Miss Maisel instead.  It was getting late and Miss Mary has to go to work tomorrow.  So, I headed out around 9:30 PM, aiming The Silver Fox westward toward Los Alamitos.  The nineteen miles flew by, and I was home watching TV twenty-five minutes later.

Tomorrow Robin and I are having lunch. I will do another and more extended walk and pay some bills plus work in the garage.

Just an old retired guy trying to finish out my last years on this planet. I lost my best friend and wife in early 2020. I was blessed again by reconnecting with Dr. Mary Côté, a long-time friend. Mary and I got married July 28th, 2021, and are enjoying life together and plan to spend the rest of our lives being a blessing to our friends and family.
View all posts by Paul →
This entry was posted in Doctor, Food and Wine, Walking. Bookmark the permalink.