For some moments in life, there are no words.

Sue was not a “phone person,” except when one of the kids or grandkids would call; then, she would make an exception!  Why not a phone person, you ask? Well, for twenty-five years, she lived on the phone as a senior manager and later an executive with Boeing.  It was a joke because our conference systems were mounted in the ceiling and often we would “talk to the ceiling” for hours.

As you can see by Sue’s expression, this was not a telemarketer!  She loved to hear from the kids and then grandkids and then great-grandkids; it would make her day!  She was the “go-to” person for several of our family members when then needed guidance and assurance that their questions would stay secure.  The many years of being on military programs taught us how to keep secrets.

Her radiant smile and soft-spoken voice is something I always miss.  Seeing these smiles and remembering the moments we had together gives me pleasure.  I remember the last year of her precious life being in pain, and constant fear of the next medical situation weighed on her.   I love you, sweet Sue! 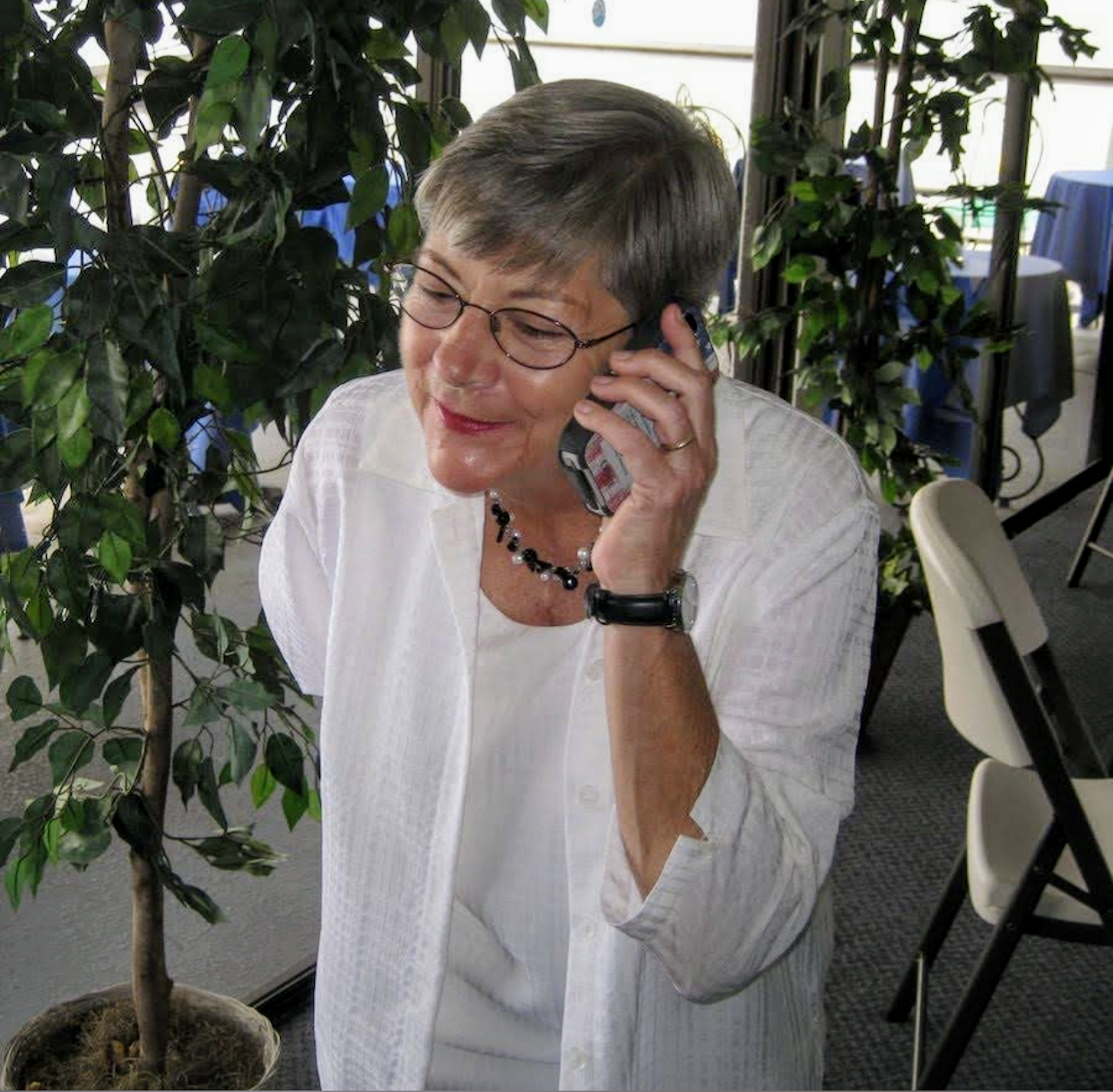 Always available for the kids and grandkids!

One hundred eighty-nine point eight pounds, my new BFF put a smile on my face this morning as the numbers swirled around and finally settling below one-hundred ninety pounds or thirteen and a half stones. 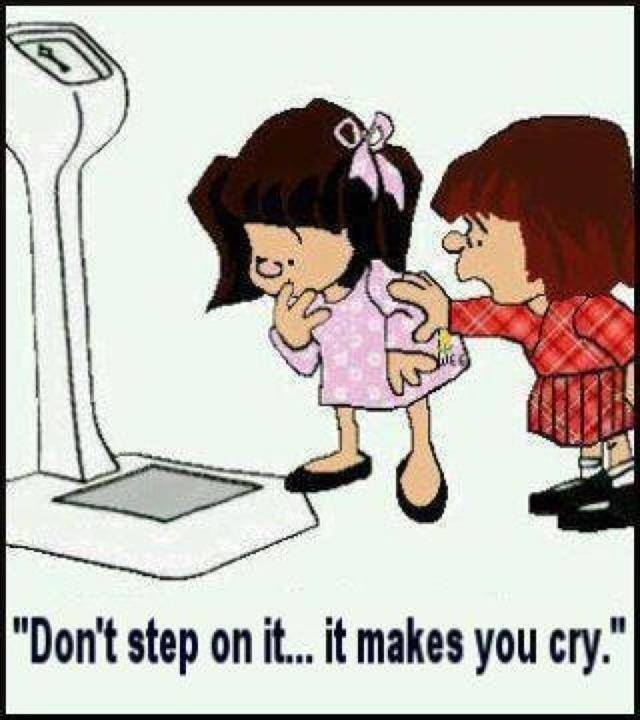 Knowing that the Santa Ana Elks was coming at noon and that a pastrami sandwich is in the immediate future, it was decided a preemptive strike was necessary.  So, to the south and for the next hour and fifteen minutes, the dust was whooshed away off the sidewalk as this massive body burnt calories at breakneck speeds approaching 2.3 miles-per-hour!

I did stop once and take a picture in the hood.  We live in an older area of Orange County! 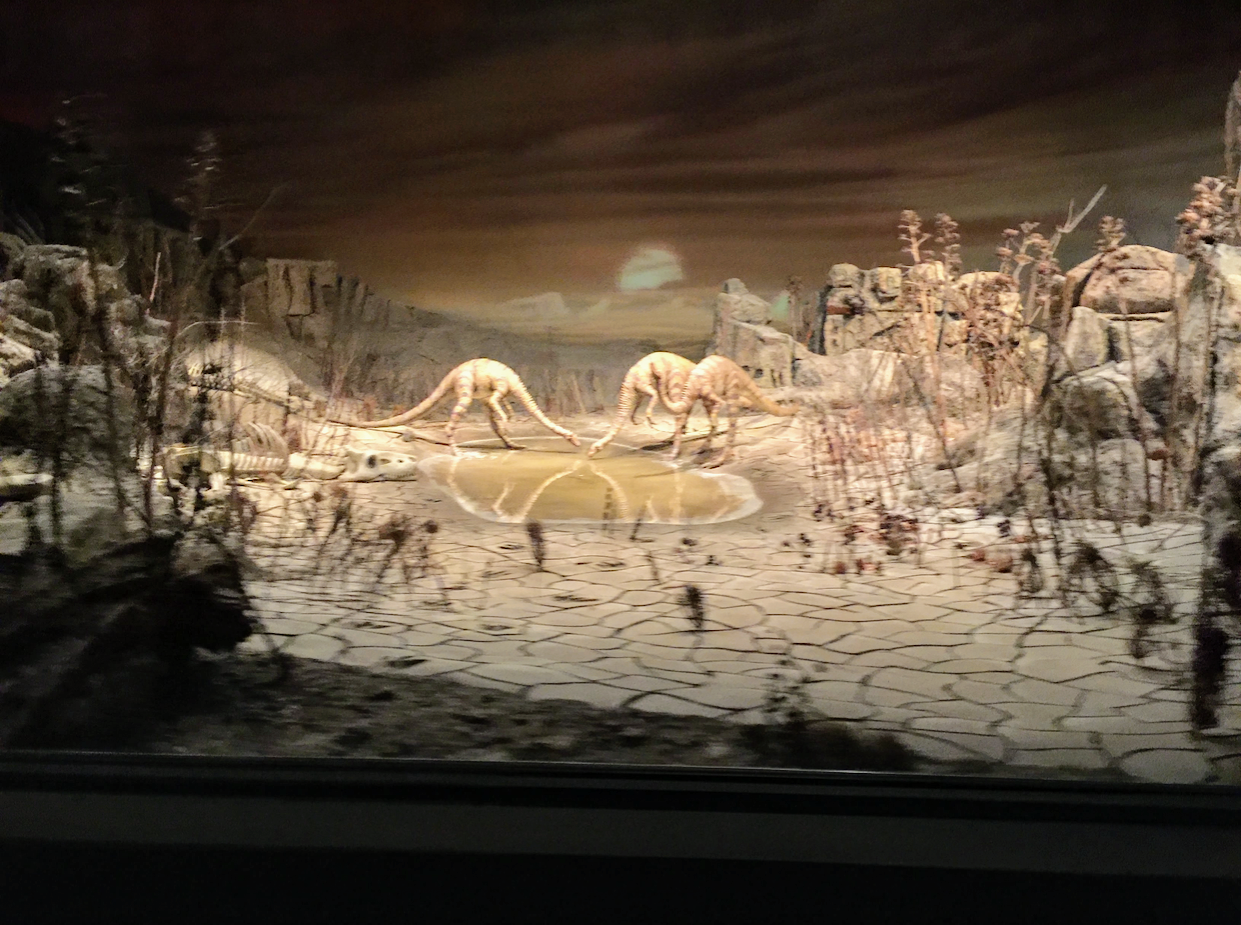 This morning the iPhone was playing 1950s music so I paid little attention to the time.   The 1950s were fantastic for music. I loved to listen to Patti Page and Frankie Laine. 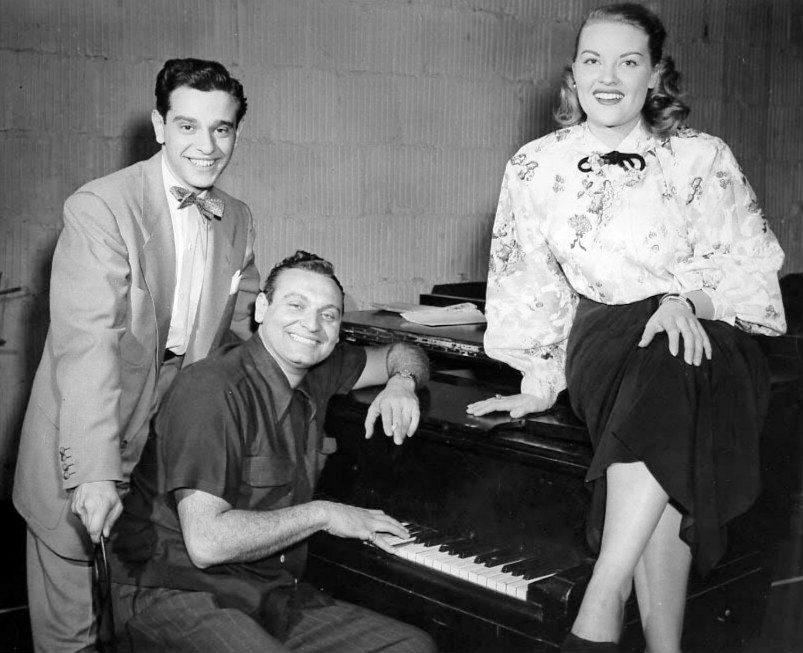 Photo of singers Frankie Laine (at piano) and Patti Page. The photo appears to have been taken in a recording studio; both vocalists were recording for Mercury Records in the early 1950s. Laine was born in 1913 and died in 2007; Page was born in 1927. The man at left appears to be singer Richard Hayes who was also with Mercury at that time. 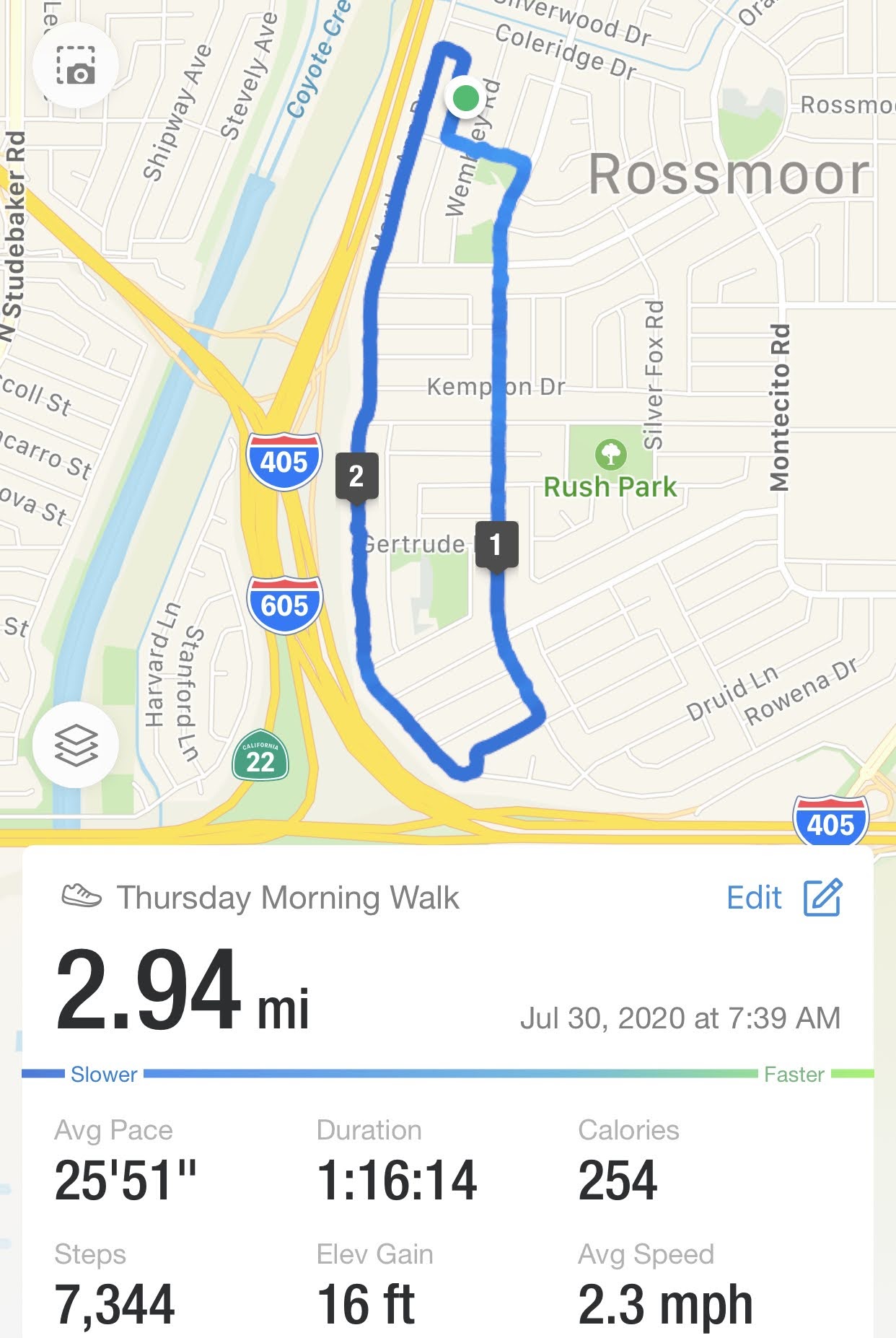 Three more miles under my belt!

Upon returning, the daily chores were completed, and then preparations were made for going to lunch with the guys!  As I entered the Elks, a new procedure was put into place. I will be happier when the virus is over!  Note to self:  Do NOT go commando!

We had a good time, the five of us.  Be blabbered for a good 90 minutes, spilled a couple of beers, and cured the problems of the world. 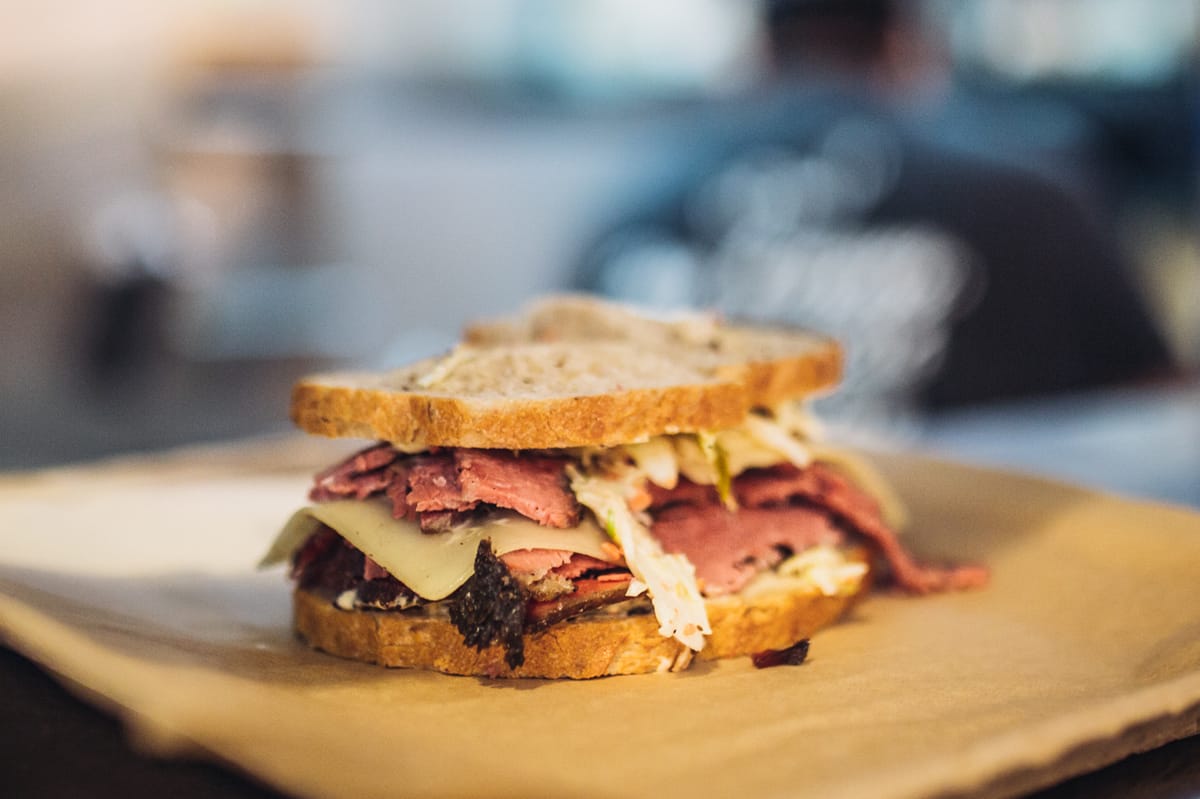 I ordered the pastrami devoid of calories!

Did You Know? To make pastrami, you start by making corned beef. Corned beef is a beef brisket soaked in brine (with some sugar and spices).

Corned beef “has nothing to do with corn but got its name…when a granular salt, the size of a kernel of wheat — corn to a Briton — was used to process it. By smoking corned beef, you turn it into pastrami.

Both the dish and the word pastrami originate from the Romanian delicacy pastram?, from which the Yiddish language borrowed it.

After getting home, I did some additional chores.  When my Amazon orders were examined, the pictures ordered were not found (because I failed to push the order button), duh!  I pushed the button, and in two days, the latest artwork for the new bathroom will be here!

After careful consideration, it was decided to continue the “travel motif” (dang! I sound like I know what I am talking about!).  Two of our favorite destinations are going to be added, London and New York. 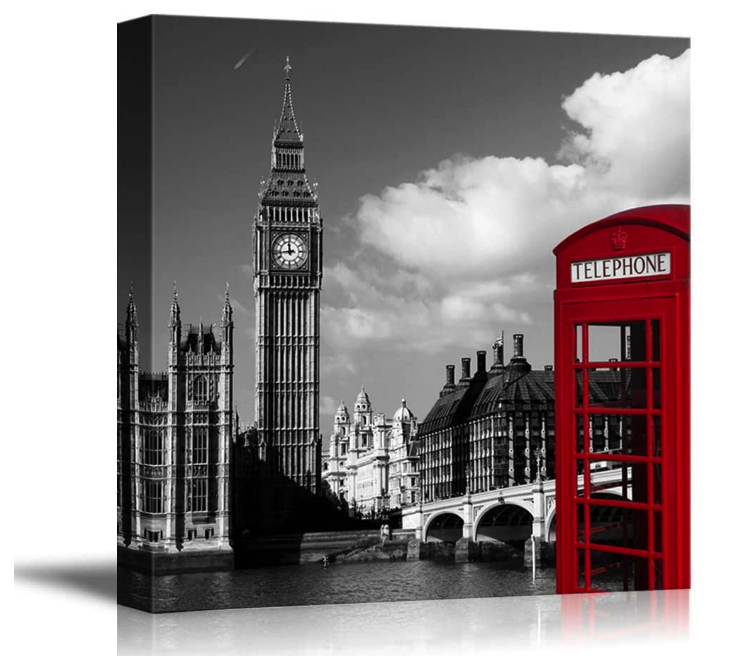 We loved London and walked for days exploring the city on every visit. 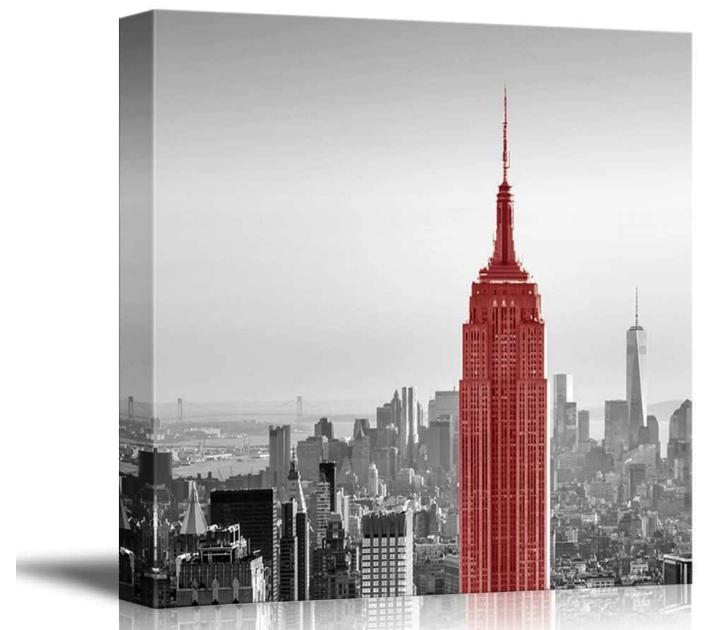 Yes, every time we went to New York, probably ten times, Sue would take me to the Empire State Building or the Trade Center.

The rest of the afternoon was just moseying around the house doing little things here and here.  At 3:00 PM, Amazon arrived with a big package, so curiosity got the best of me, and I started to open it. Oops!   It was another golf cart; I forgot to cancel the one that was going to be delivered in August!

Well, soon after that Joe called and we talked.  A flash of pure brilliance hit me, “Joe, do you have a golf hand cart?” The response was “No” but he has one now!  The package is in the back of the van and will be delivered when I arrive at Saturday’s movie night.  This Saturday is a special evening as my grandson is turning thirteen; he is a teen! The sign is funny but it gives me a lot of pride to say Amy and Joe raised good boys, they are a delight to be with and are perfect gentlemen! 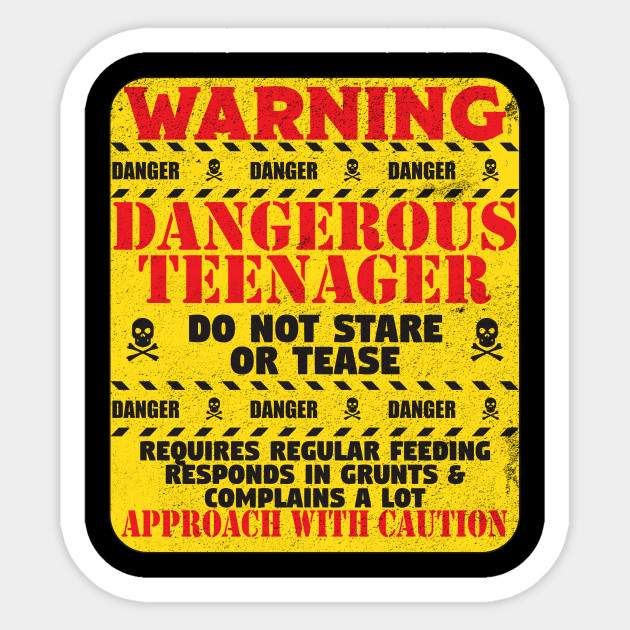 Someone came to the door at about 3:30 PM as all the alarms went off.  It was Susan Bell, the Manager of the sewer district, and she brought me the paperwork needed for Monday’s meeting.  She also gave me a link to my “headshot”.  Get a load of this! 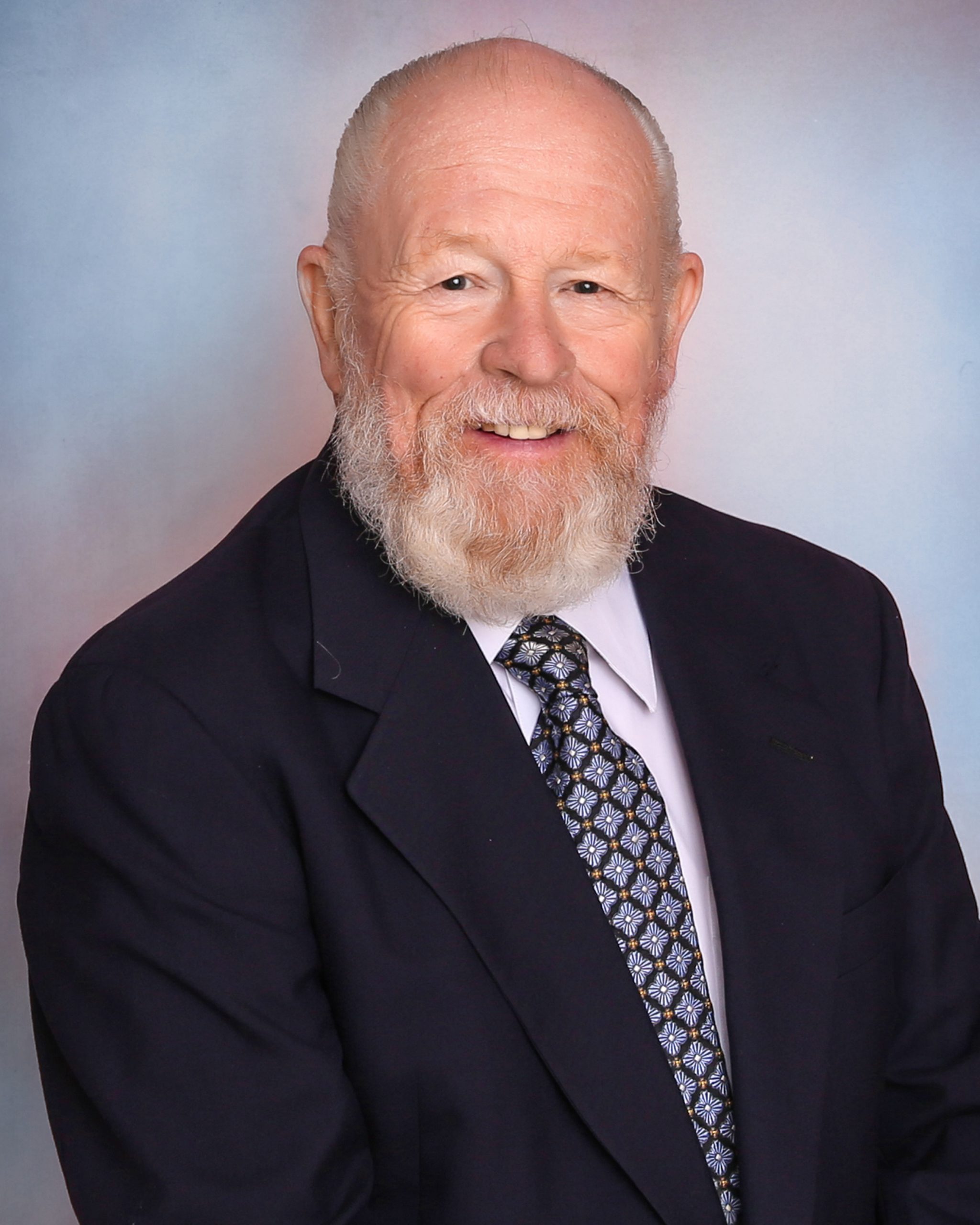 Dang! Not too bad for a seventy-five-year-old!  If you have mice or other pests, I am not selling 11x14s of this photo, waterproof, usable in the garden to scare small critters away!

To rest a little bit, I turned on “The Middle” and saw two additional episodes, which were hilarious!  It was 7:30 PM, and I talked to Robin to coordinate our meeting tomorrow, and she will be staying over as she must work on Saturday.

Being a little lonely, a trip to Patty’s Place came to mind.  Before going, the Norelco Universal Trimmer was unpackaged (a gift from Chuck), and I tried it on the whiskers.  Dang, I now look handsome and de-boner, a knockout!  In a desire to keep the girls away, I shall NOT wear my dress shirt, a blue blazer, and best blue jeans.  They will have to see me in my Hawaiian flame shirt.  One martini and perhaps a shrimp cocktail and then back home!

On the way there, I called Jan Mongell and we talked for a while. 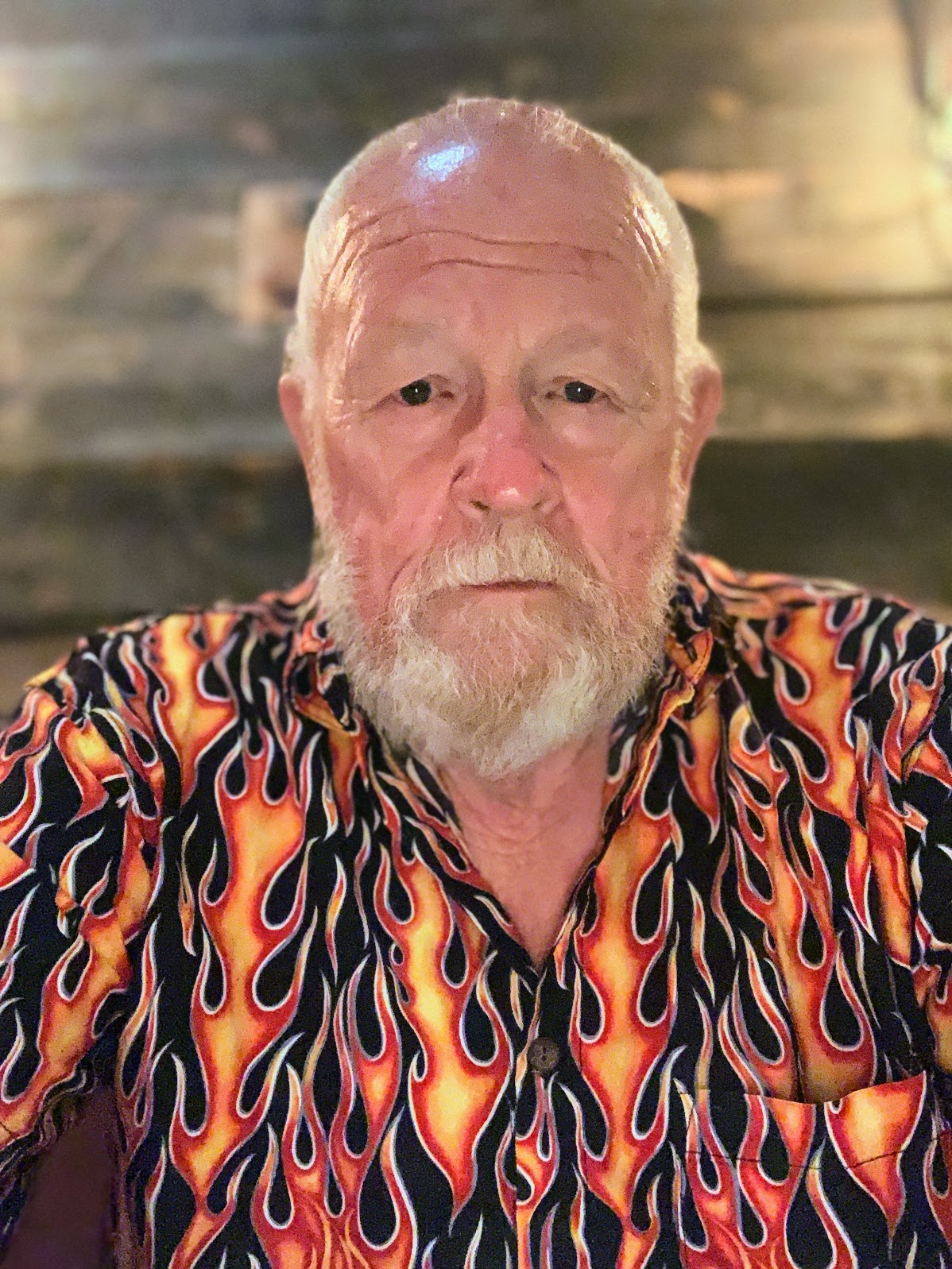 This is my “Time for a martini” look!

Well, which is a deep subject. I did three martinis and a shrimp cocktail and returned home at about 11:00 PM.  It was planned to be just two drinks but John was there and we stayed until 10:30 PM laughing and giggling.  He bought me a key lime pie and silly me, I ate it.  By new BFF will not be my BFF tomorrow morning.

My swimsuit ought to be here tomorrow as forecasters say temperatures will be five to 10 degrees higher than average for this time of the year. That translates to those along the coast feeling temperatures in the high 80s to low 90s from today through Saturday.  It will be time to swim since I have to pool at 85 degrees.

Time to crash!  Good night all.

* Too Bad It’s Only Thursday (TBIOT)

Just an old retired guy trying to finish out my last years on this planet loving my best friend and wife, having fun, learning, and passing on helpful things to others.
View all posts by Paul →
This entry was posted in Dining Out, Food and Wine, Friends, Walking, Working Around House. Bookmark the permalink.
Powered by Maribol IMDB Plugin