So Many Wonderful Memories

“God gave us memory so that we might have roses in December.” — J.M. Barrie 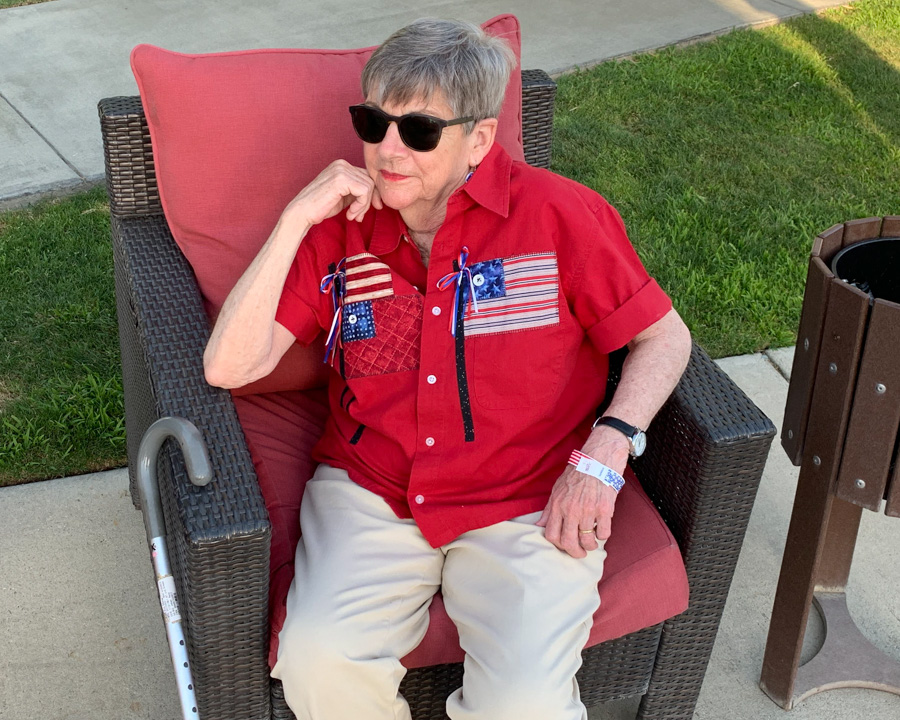 Sue was simply amazing, enjoying life to the hilt.  She went with us to get fireworks, and she picked out “the Big Bang,” which delighted the kids.  I was glad that JR and Zack were there to get it into the car.   I can see her in my mind now going “ooh” and “ah” when the fireworks went off.  This year we were at Mitch’s house, and we had Vicky and Del with us plus the Chartier’s came up from San Diego.   Today will not be easy as July 4th was one of our special holidays. 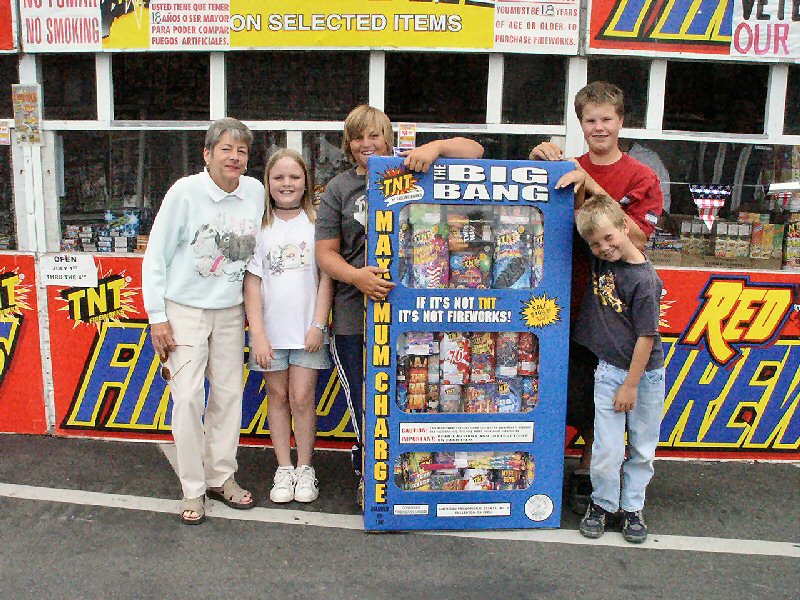 Sue was just as excited about the fireworks as the kids, maybe more!

I attempted to start the day, but a feeling of loneliness hit me like a ton of bricks.  I was going through some old boxes in the garage, and I found my dad’s funeral book and many letters from people.  That was a half-century ago, but I remember it like it was yesterday.  My bride is gone, my mom and ads are gone, and the feeling of loneliness is pretty depressing.  I can’t walk around with red eyes and tears, so I got busy cleaning my workbench and making breakfast.

Colleen read the Daily Diary and decided to get the rest of the gang dressed up in the colors of the day.  Thank you for the memories.  Sue and I would dress up all these guys for every holiday.  It brought back a lot of good memories.

Muffy and the gang in Red, White, and Blue!

I wanted to call Colleen but she has family in town and I know she is super busy so I will await her call.  Colleen worked very had to make their home ready for Mark’s family.

Bob came in about 1:00 PM and was finishing the floor today as I was getting ready to go to the Santa Ana Elks.  I was invited to have lunch and be with the Capps and Zaitz.  Donna and Bob knew this holiday would be a toughie for me. It’s great to have beautiful friends. 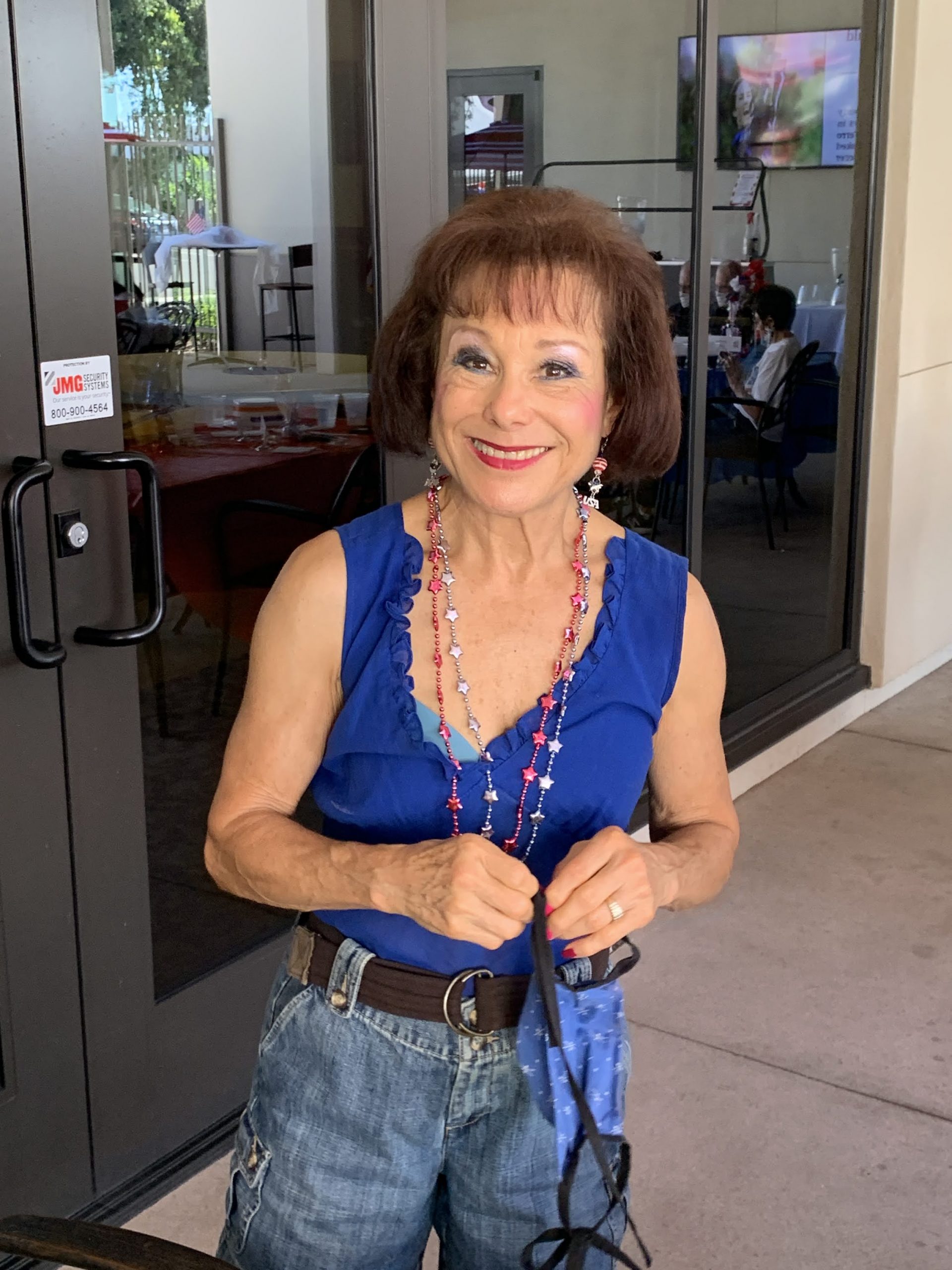 Donna was Donna, bright, and cheery.

Bill and Mary joined us, making for a lovely afternoon.  We have been dancing with Bill and Mary for many years. 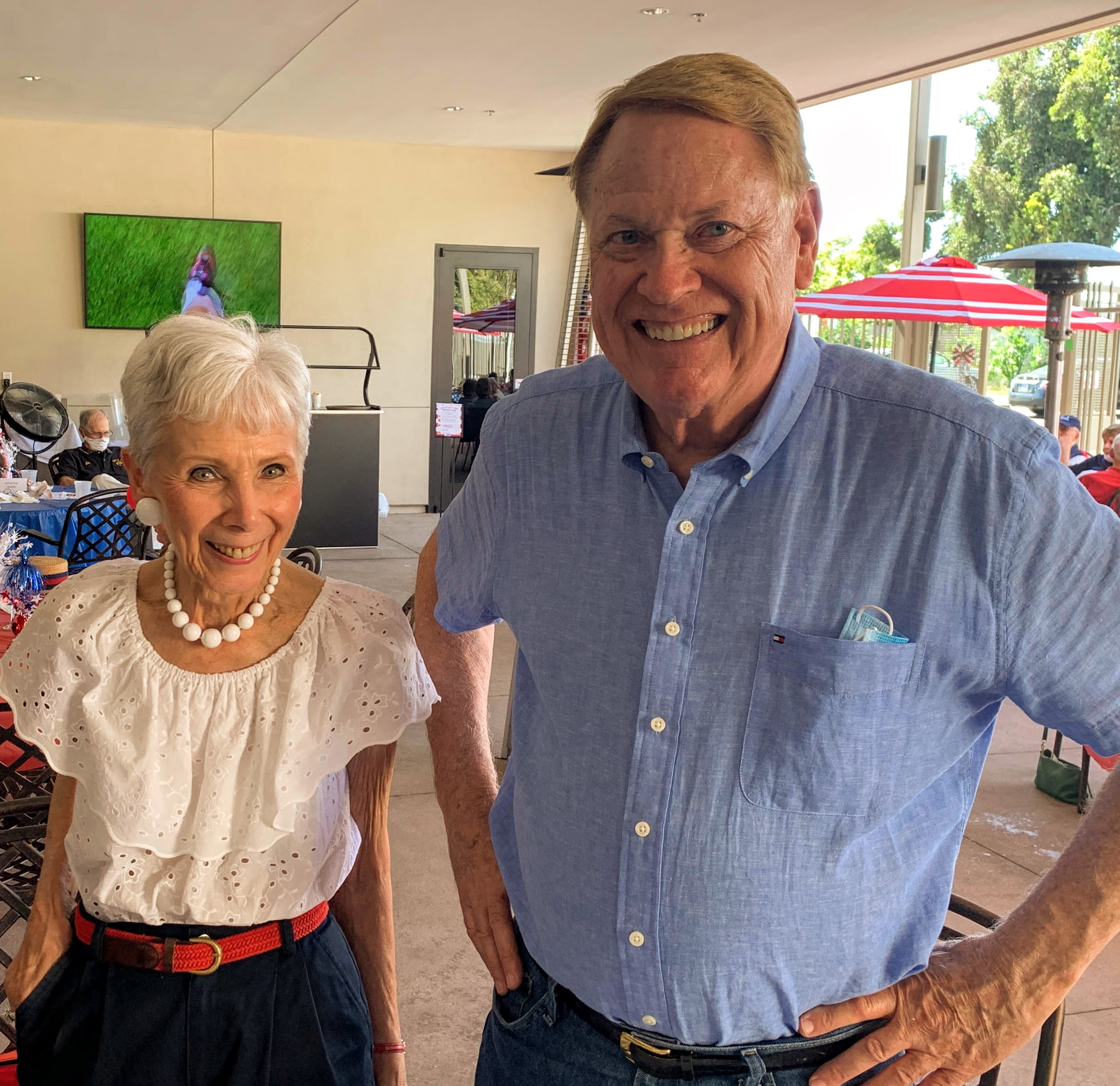 Post cheeseburgers, we are ready for the remainder of the day!  Bob and I enjoy one another’s company as we have the same sees of humor and react to events in precisely the same way!  I enjoyed a pair of margarita’s along with the burger and about two hours of great visiting. 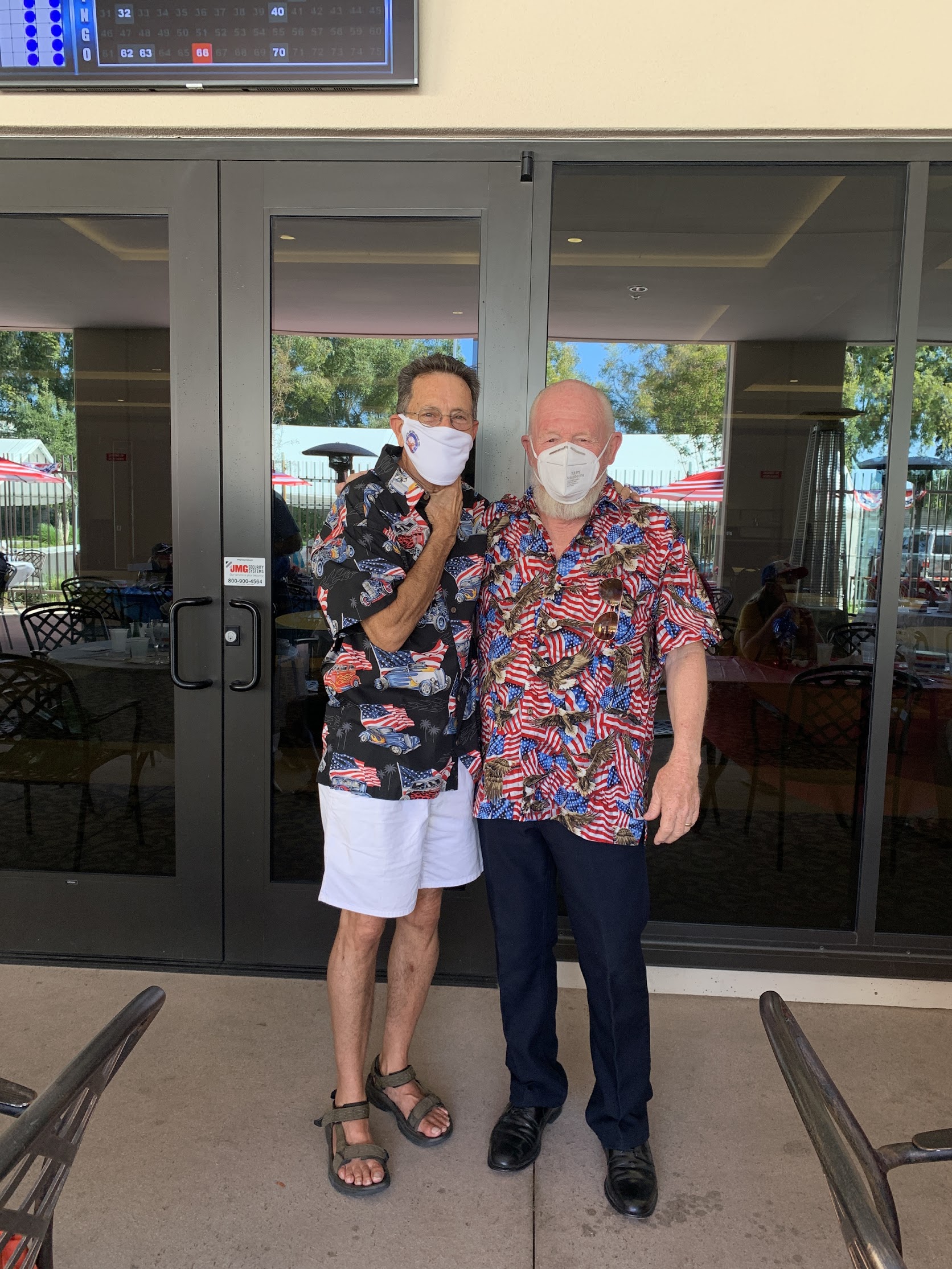 I wore my mask into and out of the Elks, and everybody I saw had a mask near them. 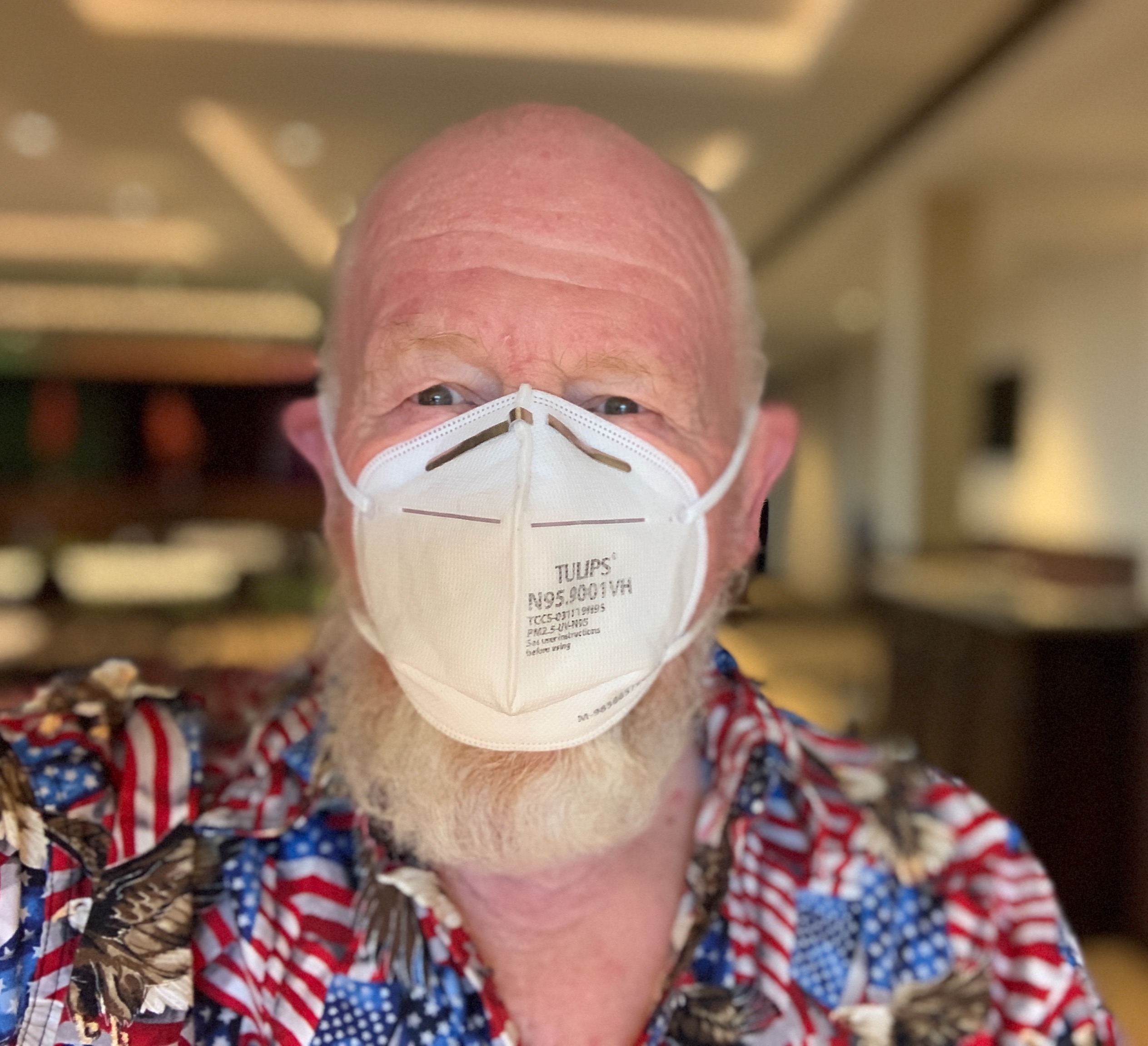 I returned home by 4:30 PM, just missing Bob by a few minutes.  He wanted to lay down the rest of the floor so it could be walked on during the final stages of the remodel.  The tile is looking great! 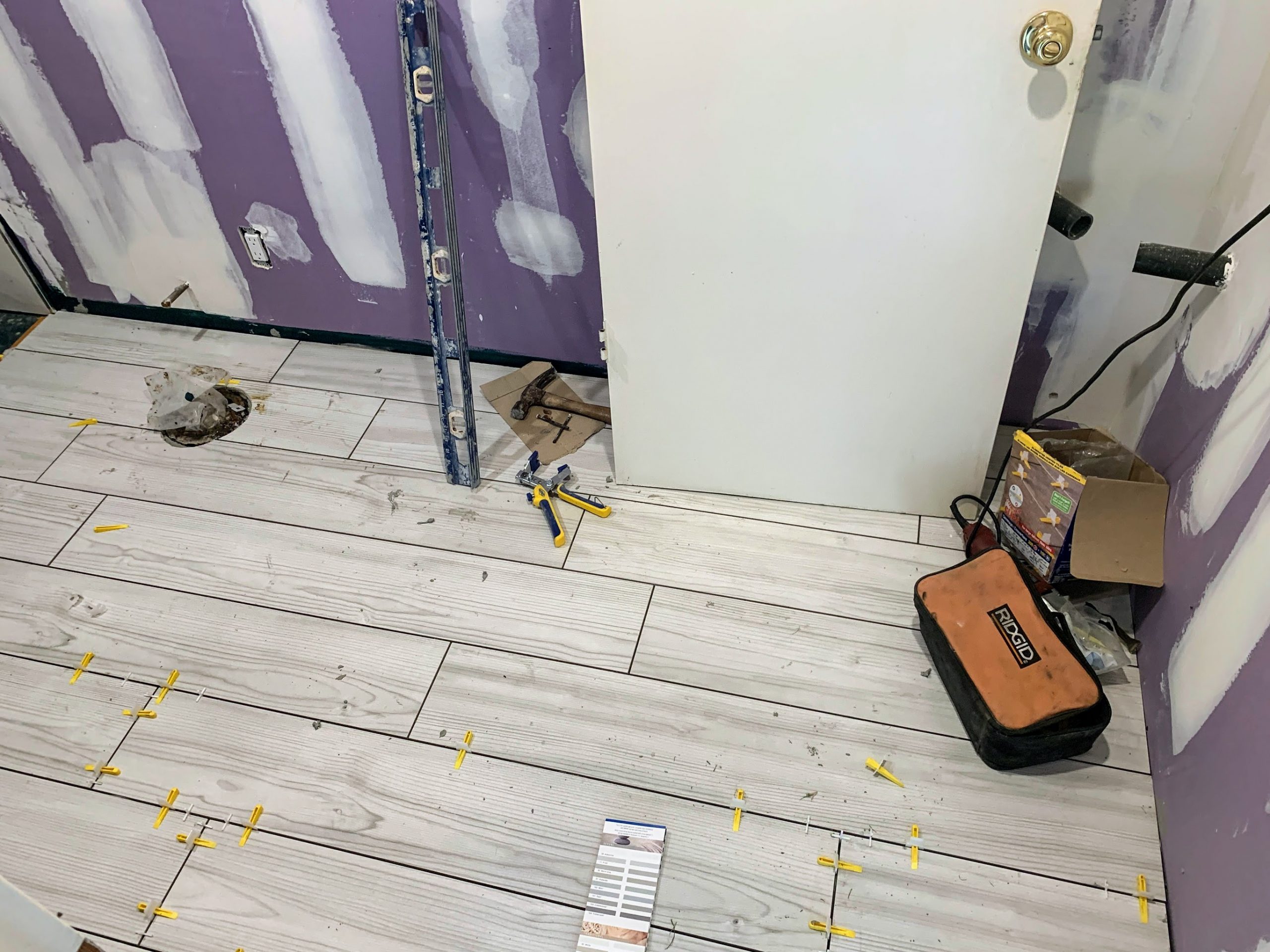 Now I am getting excited about the kitchen floor replacement later this year!

It was time to leave, so I went to Ralph’s and brought Amy a new boggle of her favorite wine plus some flowers.  While I was there, I also picked up a magnificent looking bag of bing cherries and a dozen patriotic cupcakes!

Arriving, the fireworks team was setting up this evening’s entertainment. 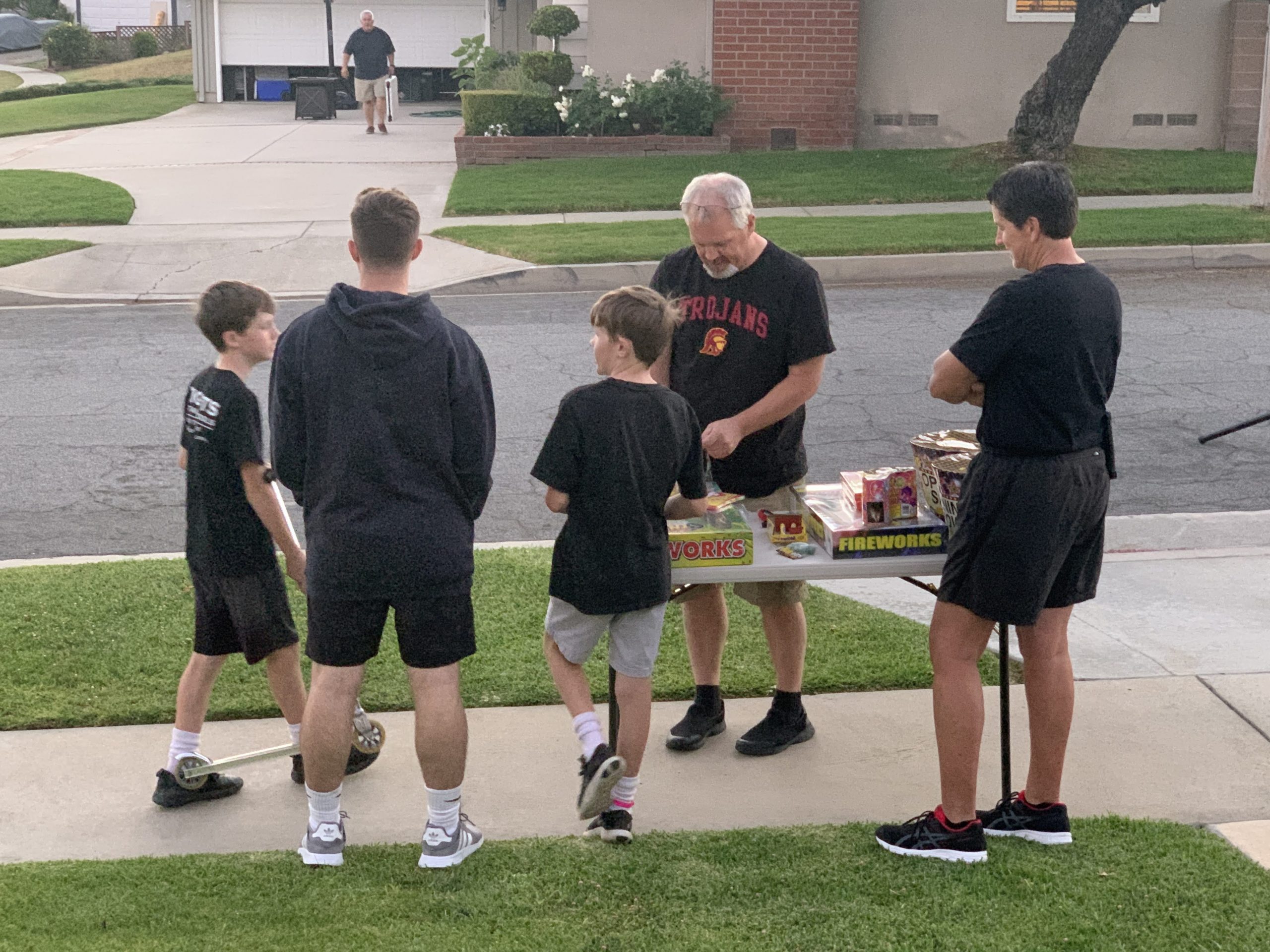 We are getting everything ready!  Don is bringing another table from his house.

Time to mentally prepare!  Joe, and his invention to hold the fireworks up high, rest before the sun sets, and all heck breaks loose! 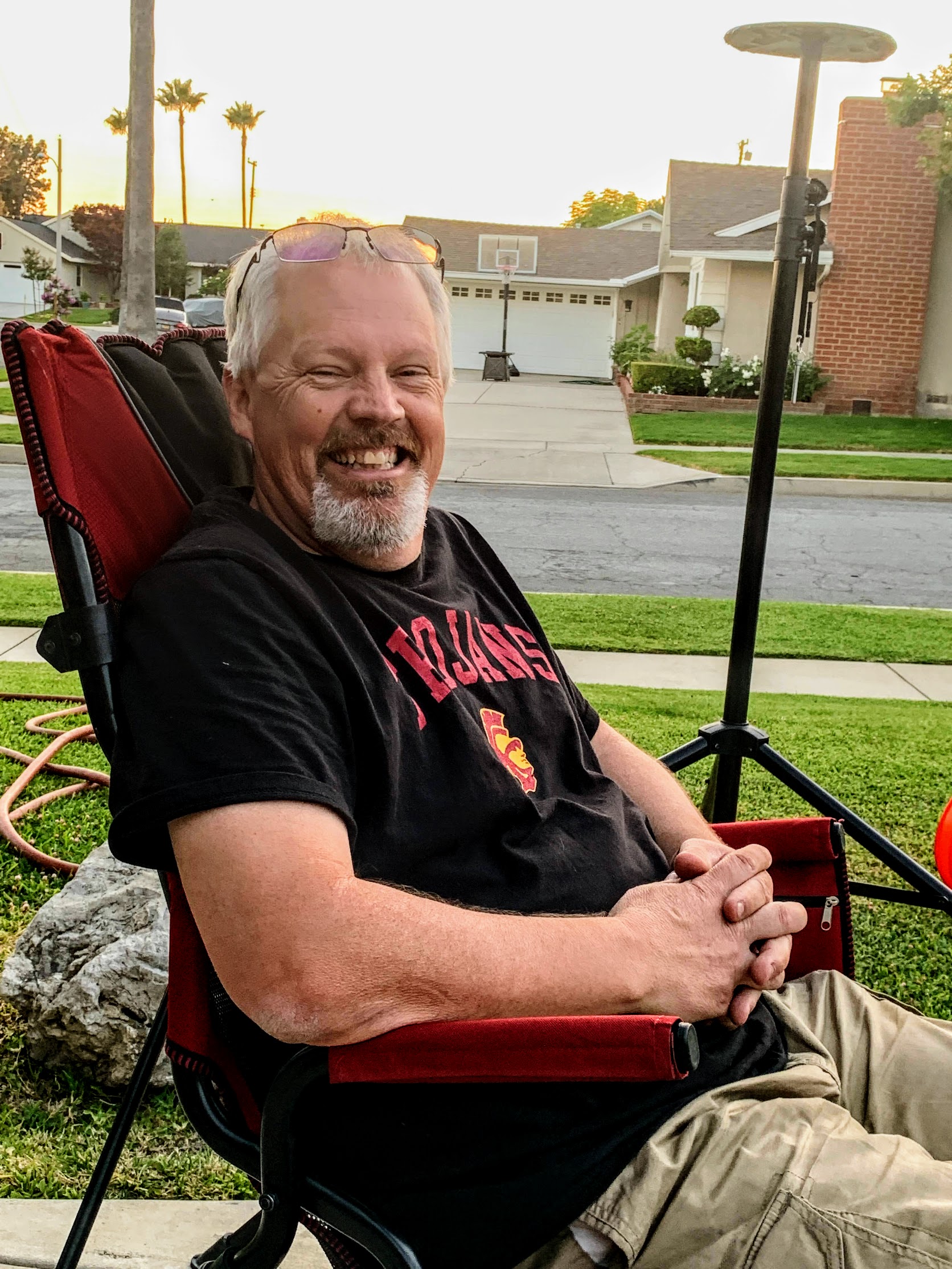 Our Fireworks Captain takes a rest before the evening begins!

It begins, but I should say I have NEVER heard so much noise in all 75 Independence Day celebrations I have attended.  The sky was flickering all night, and the sounds reminded me of a battleground.  With the cancellation of public events, I guess people stayed home and celebrated.

That reminds me that coming over the Joe’s I attempted to turn onto Katella, but there was a traffic jam!  I had forgotten that the military base adjacent to us had fireworks, and families were heading over there at 6:30 PM.  I avoided making the turn but say a traffic jam for over a mile leading to the entrance to the base. 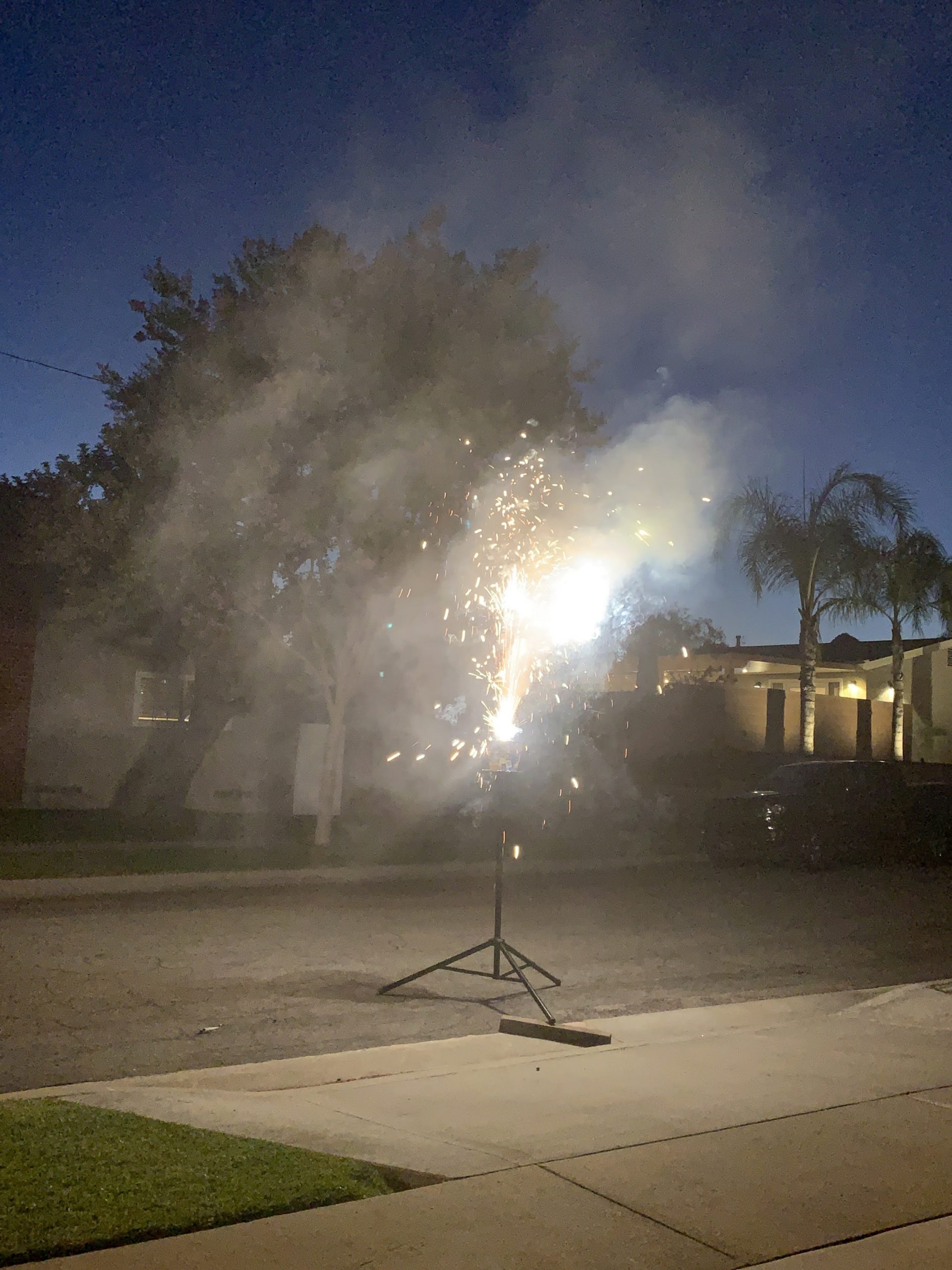 Did You Know? Those modern-day bombs bursting in air are symbolic of the real bombs that flew over the heads of our Revolutionary War soldiers as they fought to gain America’s independence from the Crown. The flashes of light that streak through the sky imitate the rockets that fly past our current American soldiers in Afghanistan on a routine basis.

Instead of watching this year’s fireworks celebration solely for entertainment, I reflected on the sacrifices past and present members of the military have made for our beloved country.

Without the dedicated service of these men and women, we civilians wouldn’t have the luxury of a fireworks celebration to watch.

I had a wonderful time this evening with the entire family. 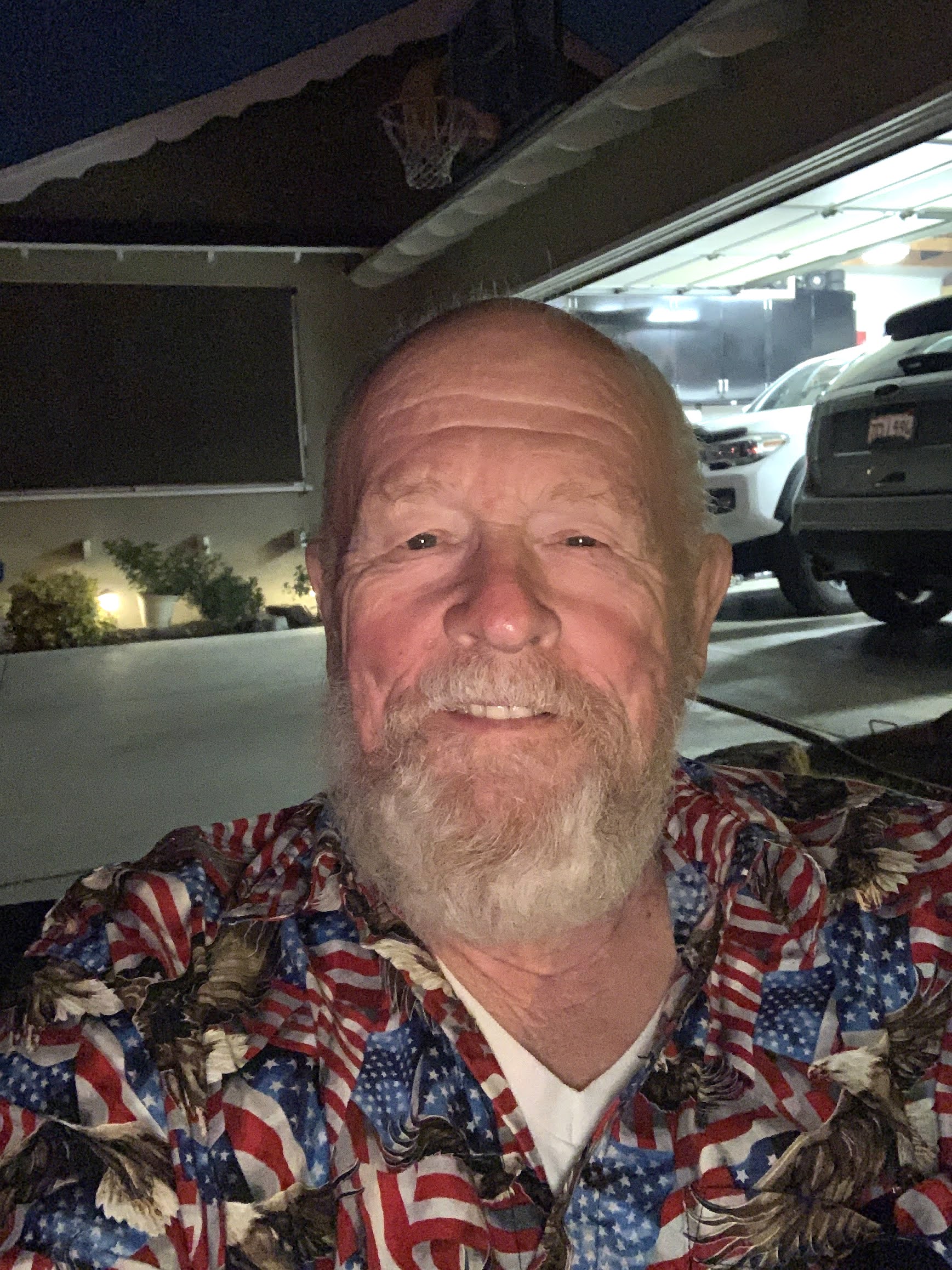 I had great fun with the family!  I missed Robin and Bob a lot!

The family got a kick out of the event, especially as the “big boys” made up names for the various fireworks and proudly pronounced the name out loud.  We should have guessed they were making up names when we heard “Big Burrito” and “Watch Out”, etc. 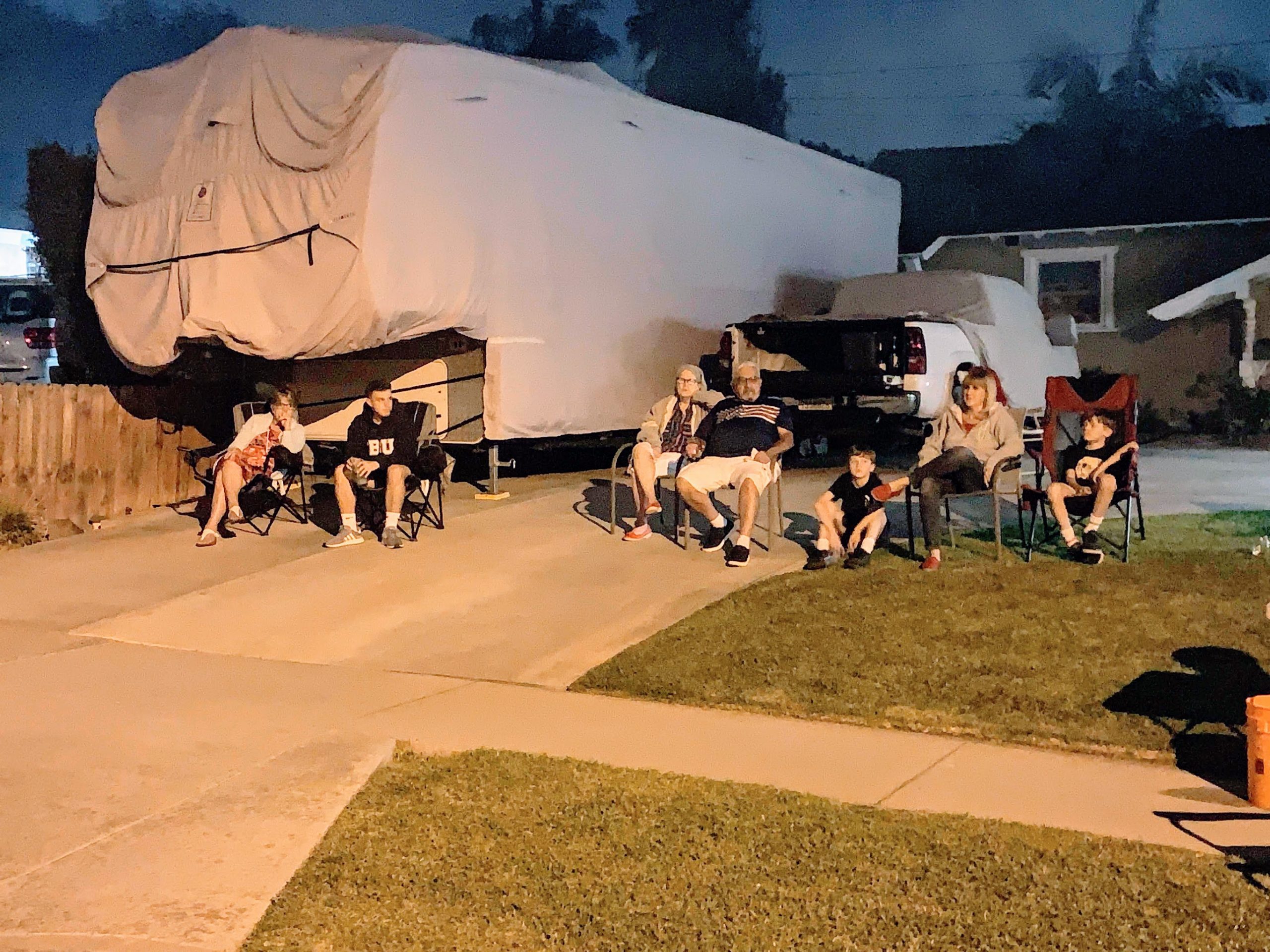 We all had the best seats in the house!

Joe places the fireworks on the stand so we could see it perfectly.  It was a great idea! 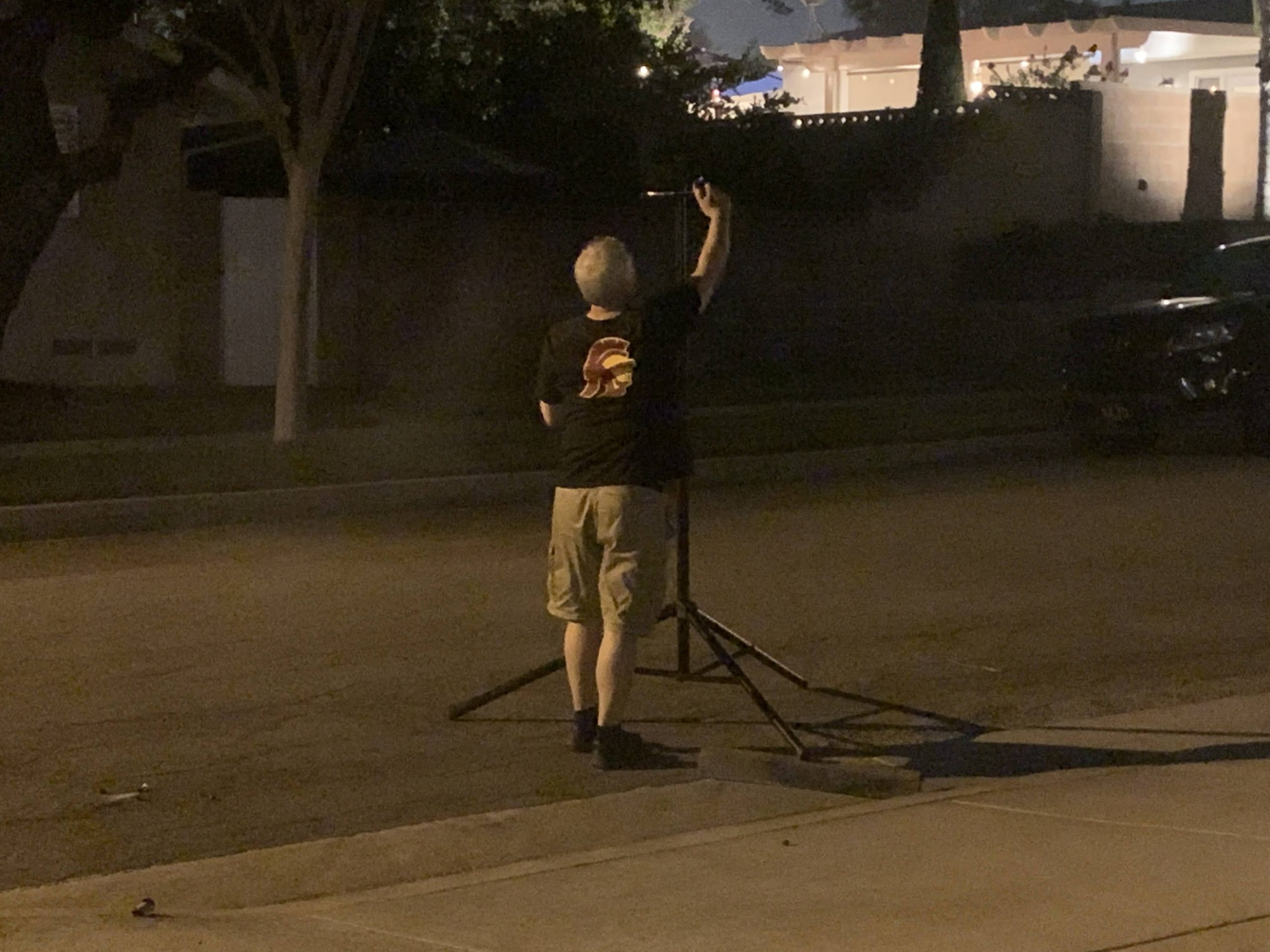 The neighborhood was also surrounded by sounds and a lot of explosions in the sky; we were in surround-works! 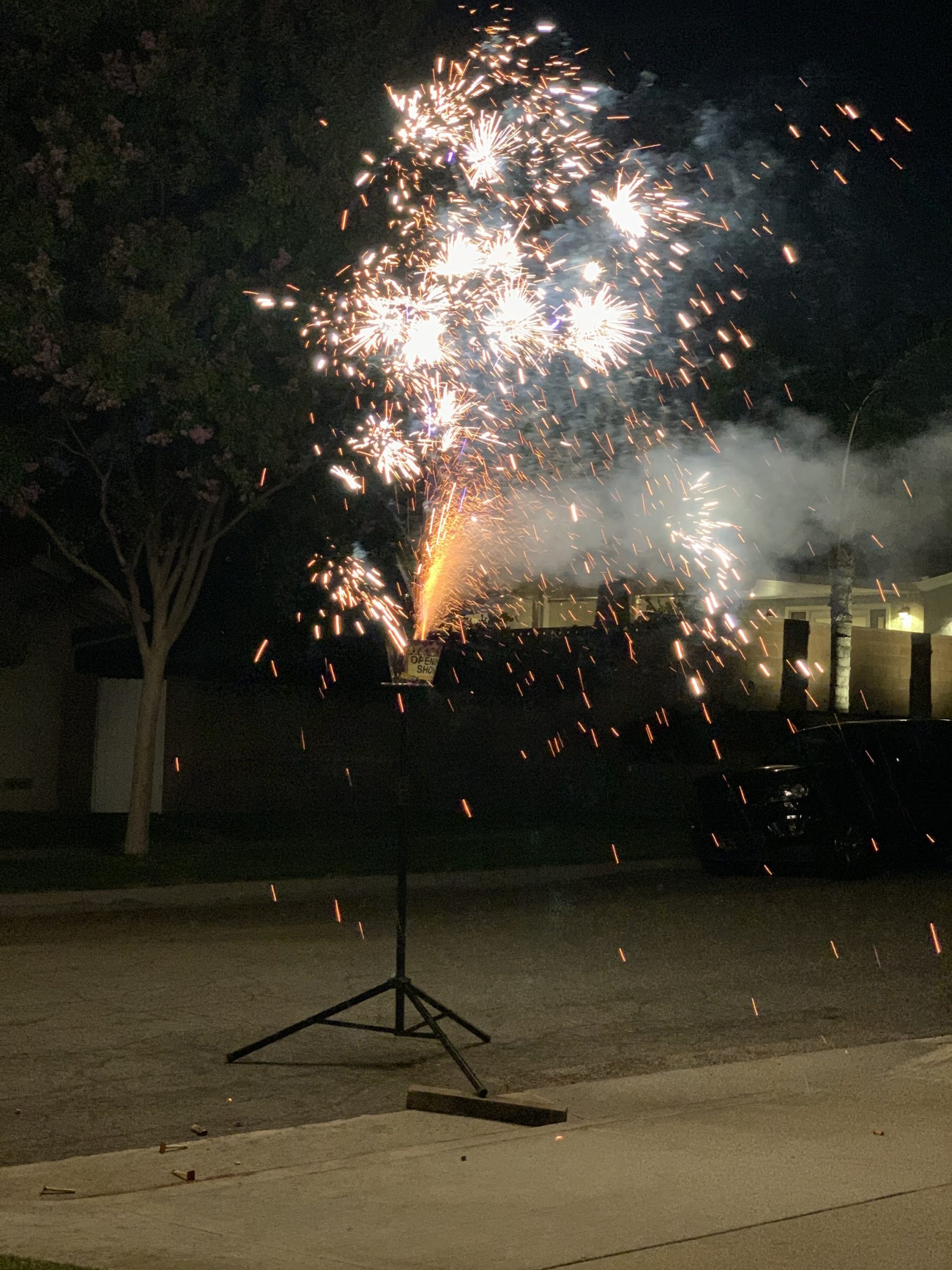 By 10:00 PM, the show was over, and my ears were in dire need of some quiet.  As I headed south toward Seal Beach, I was stopped by a fast-moving right train.  The train must have been going 50 miles per hour as it whizzed by in a matter of a few minutes. 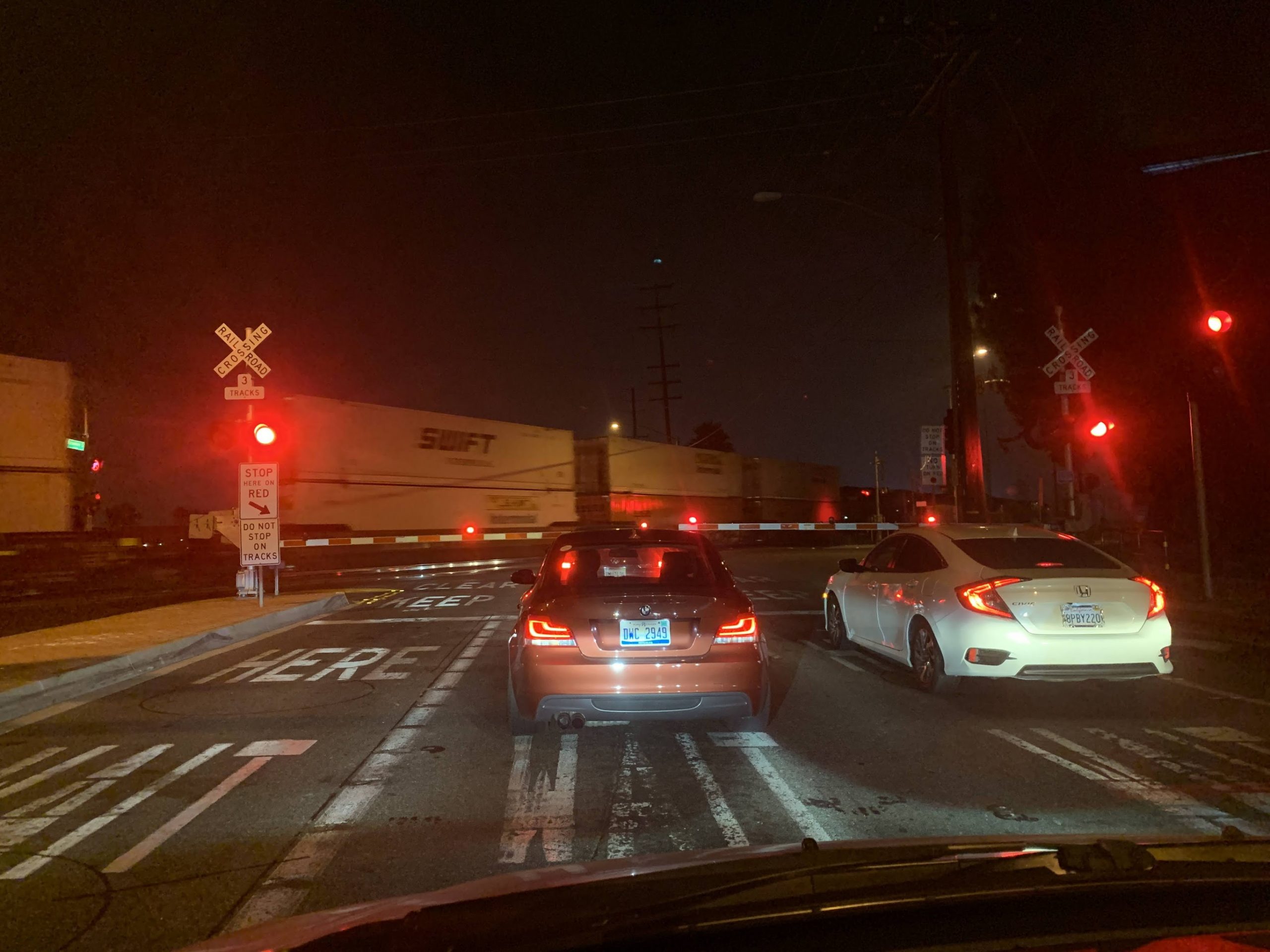 The Choo Choo was moving fast; I could feel the ground shaking as it passed by.

By 10:30 PM, I was home, safe, and sound. The day started out being a sad one as I was missing Sue so much, but great friends and family made the day “OK”.  Colleen called along with Pete & Lisa and Robin & Bob, so I remained connected.  Then Bob and Donna helped as we remembered many July 4th celebrations in the past, and finally, Amy, Joe, and family completed the evening.  Thank you, guys!

As I dropped off the sleep, I thought of the thirty plus years that Sue and I had together.  I miss her so much! 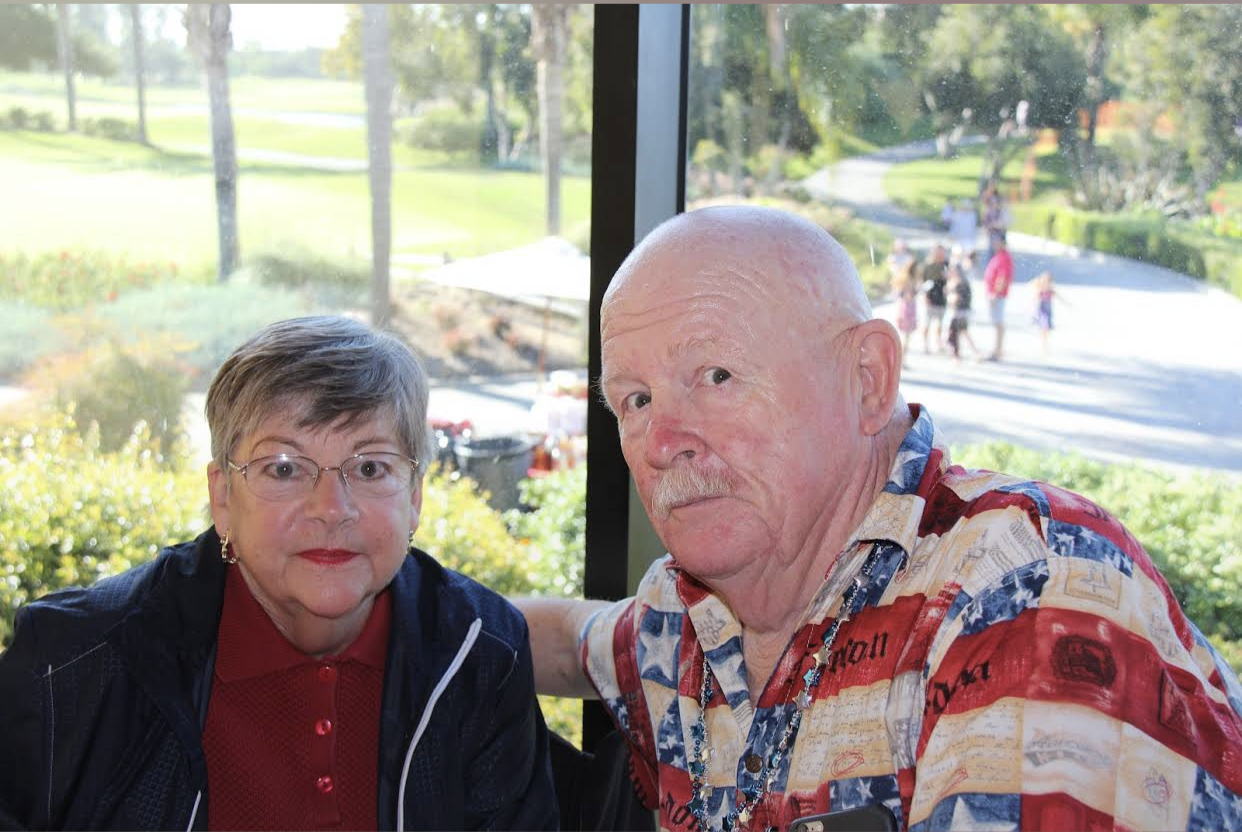 She was such a magnificent partner in life!

Just an old retired guy trying to finish out my last years on this planet. I lost my best friend and wife in early 2020. I was blessed again by reconnecting with Dr. Mary Côté, a long-time friend. Mary and I got married July 28th, 2021, and are enjoying life together and plan to spend the rest of our lives being a blessing to our friends and family.
View all posts by Paul →
This entry was posted in Adventures, Family, Holidays, Working Around House. Bookmark the permalink.