Half The Year Is Gone; So Far So Bad!

“Grief is not linear. It’s not a slow progression forward toward healing; it’s a zigzag, a terrible back-and-forth from devastated to okay until finally, there are more okay patches and fewer devastating ones. The mind can’t handle emotions like grief and terror for any sustained period, so it takes some downtime.” – Lisa Unger

It’s been nineteen weeks, and it seems I think of Sweet Sue more and more each day.  The forecast for today is “lonely!”

She was a patriot and loved our country.  Red, white, and blue was the dress code for July.  She loved the fireworks and seeing everyone together, celebrating.  She would suggest buying dinner for soldiers when we went to dinner, and soldiers came into the establishment.

Below, we visited the Newport Harbor Elks for a drink.  I miss her. 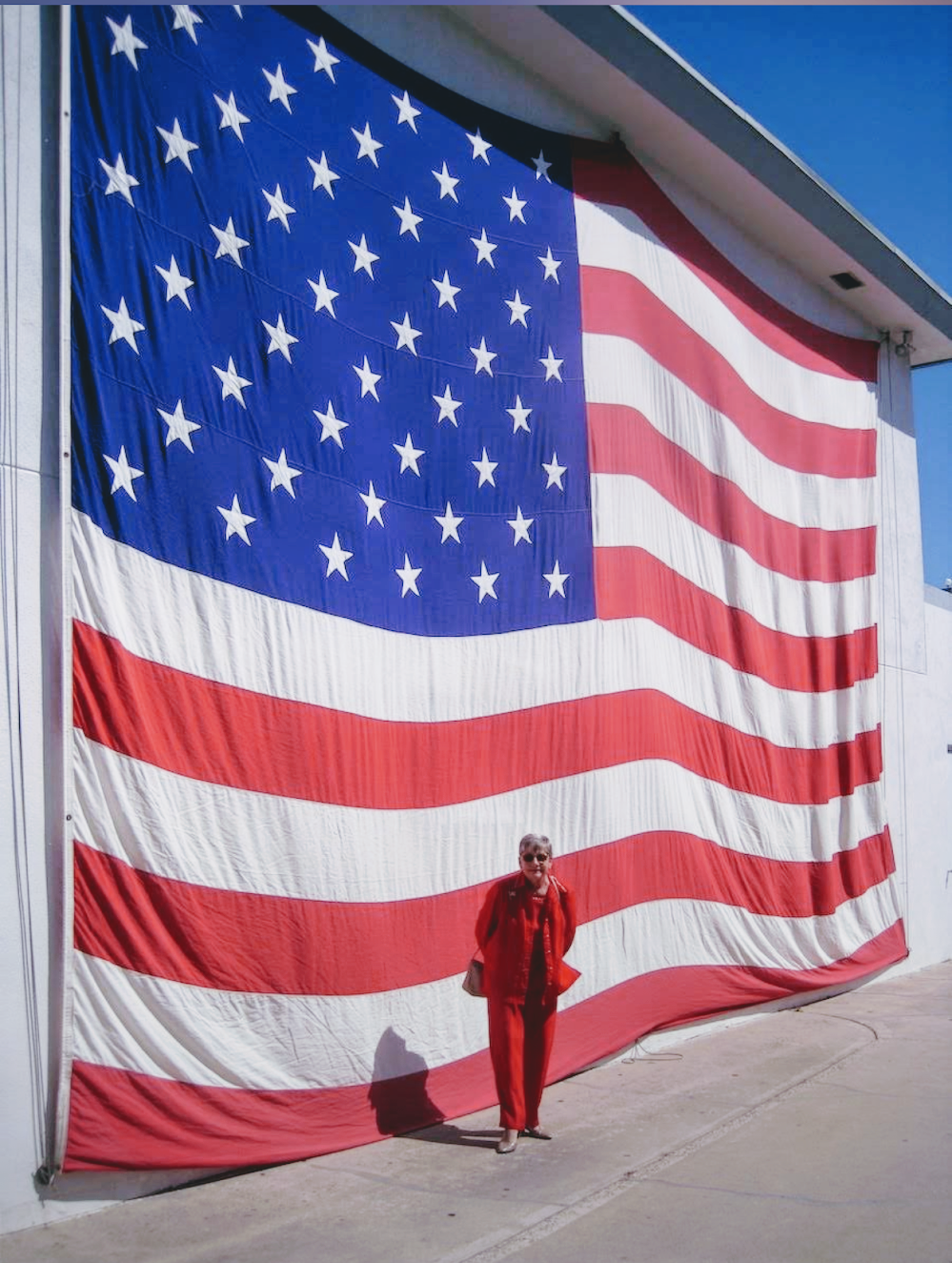 She loved our country!

It was time to conversate with the east coast, so I asked Alexa to call Colleen and voila, there she was on the big screen.  Colleen had her grandkids with her, so I got to talk to them for quite a while. My great-granddaughter was quite talkative today.  She was telling me about her long hair. 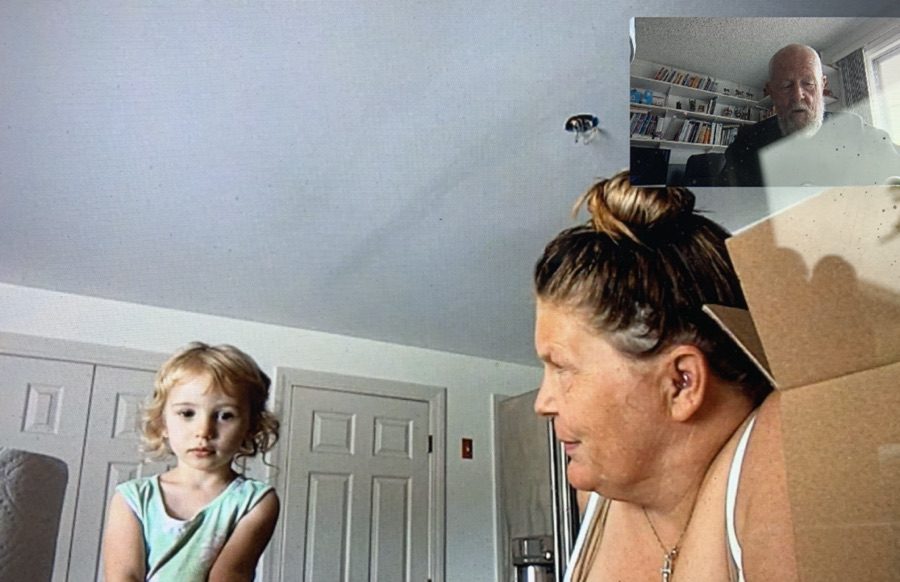 On the Bat Phone.

Of course, I teased her and told her that I had long hair; she looked carefully and pronounced that it was incorrect. Then we talked about teeth and I learned a lot.  She is a cutie!

I darted to Lowe’s first thing to gather hardware for the second outdoor floodlight, but after getting home, I decided to wait until later this summer to install it.    I want to see the light without the tomatoes in the way.  The Silver Lady was with me today.  She likes the run-up the freeway.

My house cleaners galloped in early as they are doing the windows today.  They had masks today, so I asked, “Why the masks?” It turns out they were allergic to all the dust in the house because of the reconstruction!  It never bothered me.  I told them it would be another week and then we should be done!

When they were done, the windows were beautiful; I could see outside!

I finally made the call to the vinyl fencing company.  The iron has been up for almost 25 years, and although I paint it regularly, the paint just does not hold up, so vinyl is going to replace it. The new gates will be here in about three weeks, and I will be glad to see them. 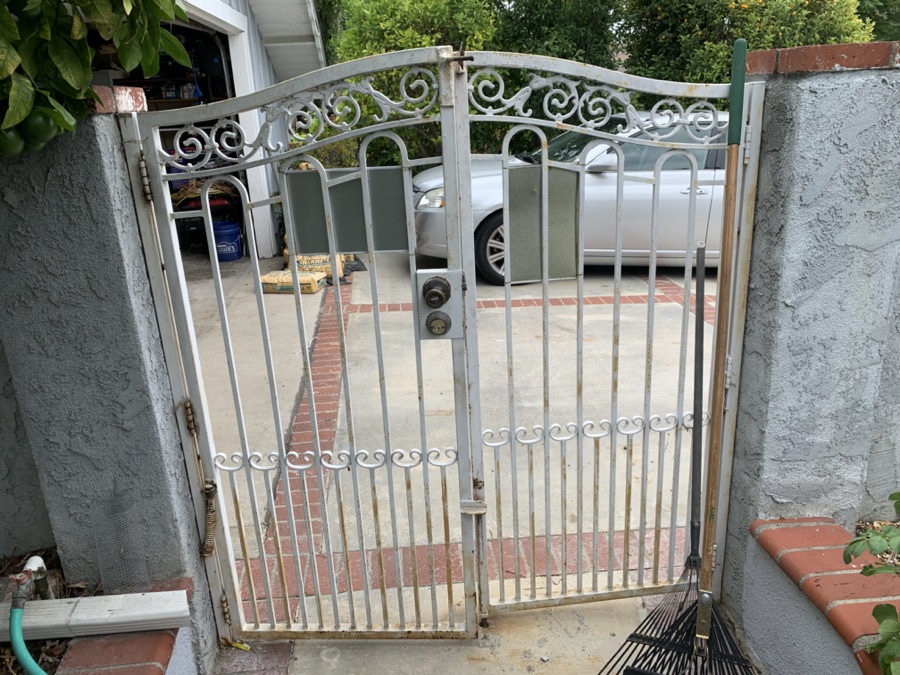 Vicky came over and when shopping, taking bags of tomatoes, squash, and other goodies from the garden.  I love it when folk use what I grow.  Today I am making hamburgers for myself, and I have an eye on one tomato, it has my name on it.

At 3:45 PM, Robin arrived from work; she was ready to walk, so we made haste setting our compass south.  The more we walked, the hungrier I got, and finally, Robin said, “Let’s go to Patty’s Place”.  So we did! 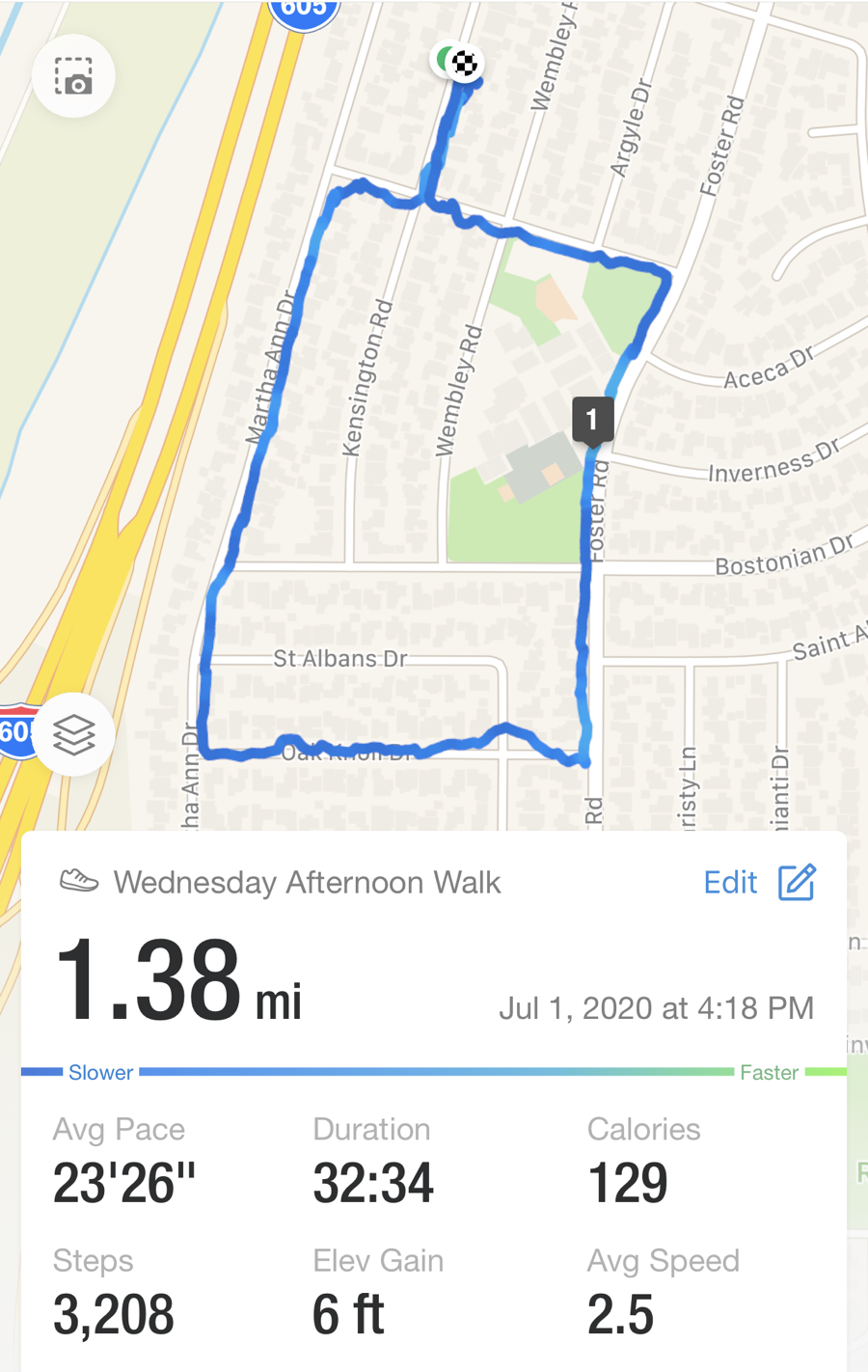 A short walk today because it was dinner time.

Patty’s was surprisingly busy at 5:30 PM, but Chuck sat us at our favorite table.  Robin got to watch the fishies, and I got to watch the bar.  We both had their “Steakhouse Special,” which is a 6 oz steak, French onion soup, and a small dinner salad.  It was right on! 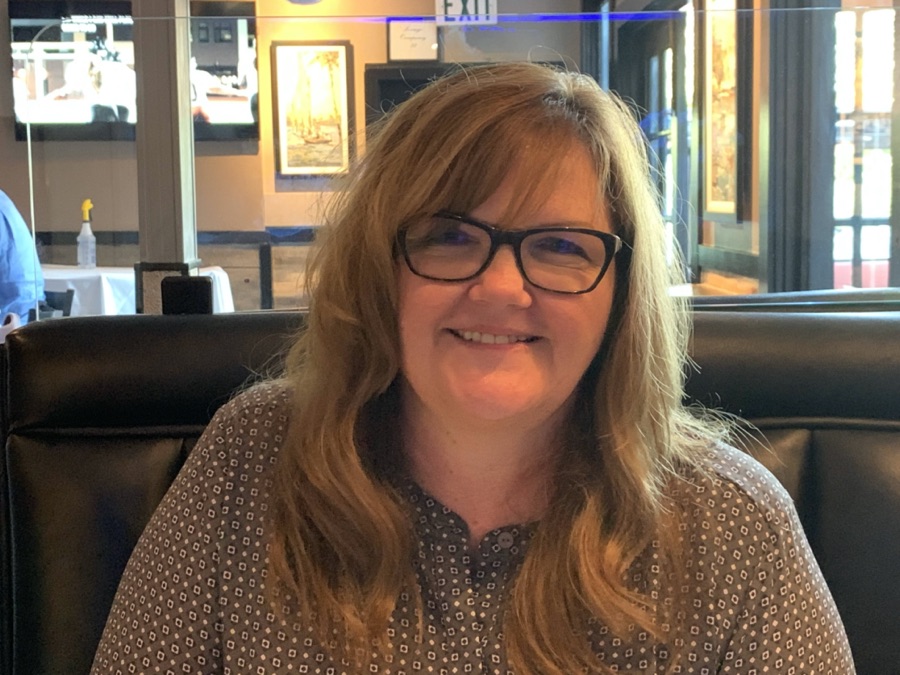 Dinner at Patty’s Place with my eldest daughter! She is such a joy!

Returning home after dinner, Robin also went shopping in the garden, plus she found the plums and filled a bag with those beauties.

I do not know why, but I was lonely all day missing my bride.  I saw Diane’s post again and determined Diane and I feel the same way! 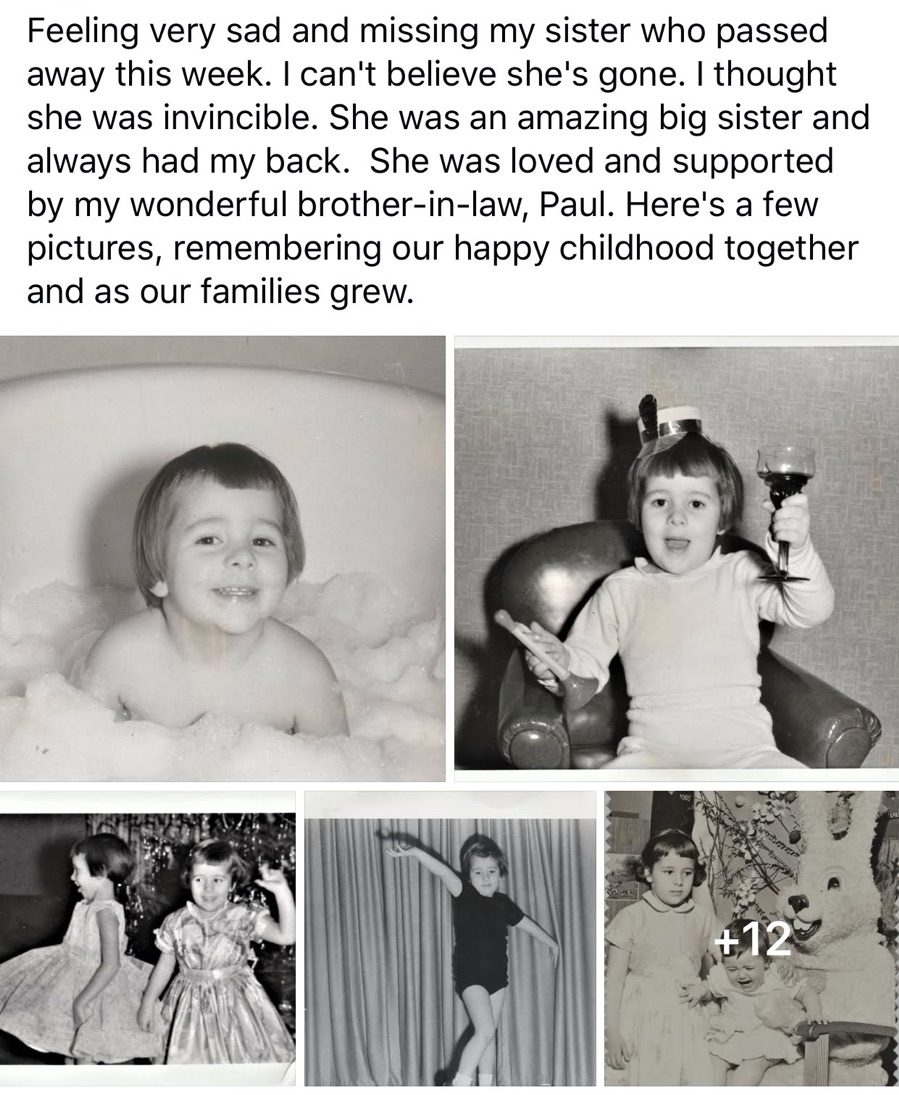 Memories around every corner.

Bob kept on working, and he finished about 8:00 PM tonight.  We had our “end-of-the-day-beer,” which is an O’Douls!  Neither of us drinks, Bob not at all, and me just a tad.

The grout is not in yet, and they are just hanging on the wall setting overnight.  This is going to look magnificent. 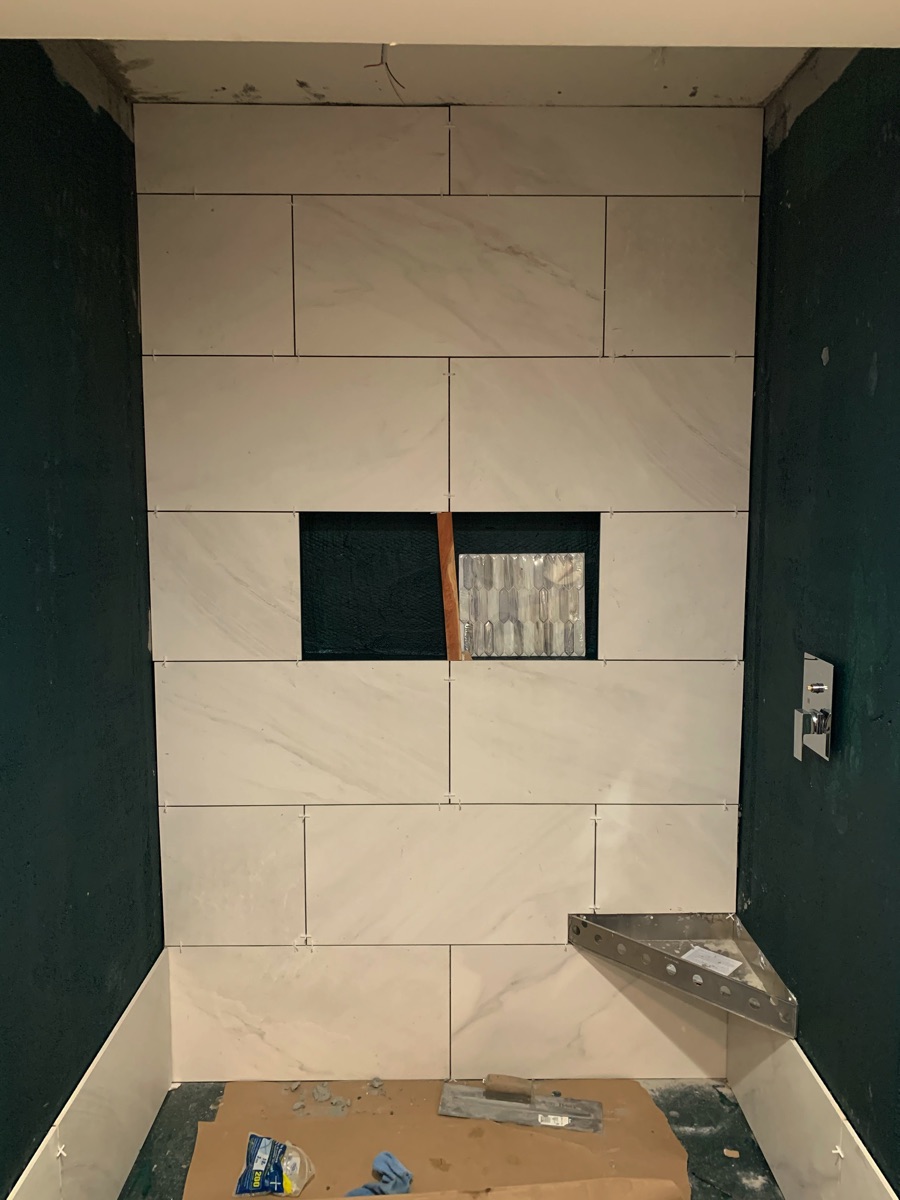 Coming along, tomorrow, all the tile will be up, and the floor gets started!

We were having our “beer” in the patio, and my security lights kept coming off and on like they are supposed to when they sense motion or noise.  Then I remembered, I have an app on the phone in which I can control the lights, making them motion-sensitive or not.  Out of my pocket flew the iPhone; I searched for Defiant, and there it was, the app of the moment.  With the push of the button, the lights were permanently on!

I forgot I could manually control by patio lights!

The day she is complete, and this old man is going to have a cup of coffee and hit the living room to watch a little TV.  I watched a science fiction movie, but I fell in, and out of sleep, so I do not remember much of it, so it sounds like it will be a rerun tomorrow.

I was thinking of my dad as I traipsed into the bedroom.

I sure wish you were here because you always had great advice when I needed to make a decision.    As you know, my beautiful wife passed, and I am not moving away from my home, at least for another ten years.  Like Mom, I will stay where I had the greatest memories of her.  Since I am staying, I am doing some updating with a new electrical box, new pool lights, some wall work, replacing gates, modern bathroom, and probably some new flooring.

So they have a thing called “solar power” now.  It was a kind of science fiction dream in the 1960s, but it is real today. If I give this nice man a big box of money, he will put solar cells on the house (3′ x 5′ glass sheets), and I will be able to take my electric bill to zero (or less).  The panels sit in the sun and create electricity, which goes into the main power box and avoids the need for taking power from the power lines.  Neat, huh?  My guess is about $15,000 before government rebates, and that means a payback of something like six years.  My inclination is DO IT.  What do you think?

I have a book called “The History of McRae Arkansas” that I got from my uncle Otis years ago.  I am sharing the book with Colleen and Joe, your grandkids!  Colleen is really into genealogy, and Joe is interested from whence he came.   There are pictures of your sister, Aunt Edith, in her basketball costume after winning the local championship in 1927, close to 100 years ago!

The book, written by James Cook, likely a relative of ours since your Mom was a Cook, talks about how your uncle brought the lumber mill into McRae, and that allowed electricity to come to “town” in 1912.  Aunt Opal was quoted as saying, “When I first saw an electric light, I tried to blow it out when we left the room.” I had to laugh.

You would have been so proud of your grandkids. You, me, Joe, Colleen, and Alex (your great-grandson) are clones of one another! It is incredible to see!

I’ll write to you again soon and keep you posted on the work around the house.  I wanted to also thank you for teaching me so much about “stuff”.  I can still plumb, do electric, mix concrete, carpentry, etc.  You were a fantastic teacher!

Time to crash! It’s been another long day, and I am ready to rest. However, I will leave you with a thought!

Just an old retired guy trying to finish out my last years on this planet. I lost my best friend and wife in early 2020. I was blessed again by reconnecting with Dr. Mary Côté, a long-time friend. Mary and I got married July 28th, 2021, and are enjoying life together and plan to spend the rest of our lives being a blessing to our friends and family.
View all posts by Paul →
This entry was posted in Dining Out, Letters, Walking, Working Around House. Bookmark the permalink.