The Weak Begins; The Tired Stay in Bed!

“How lucky I am to have something that makes saying goodbye so hard.” — Winnie the Pooh

It was a few moons ago when Sue said, “Let’s take the boys to Alaska with us!” Well, we did.  The year was 2008, and Jonathan and Zachary were the perfect age for a trip with Grandma and Grandpa.  The four of us just had a ball laughing and giggling the entire time, and Sue said, “I learned more about anatomy and strange sounds than I ever knew before!” Well, after all, she had three teenagers with her.

She was not just a sport; she was a “super-sport”.  We flew in helicopters, winged our way down narrow fjords in floatplanes, road trains to the Canadian border, got lifted in trams, took bus rides through the Denali National Park, and we shared a “family room” on the back of the ship!

The boys (who are now 30 & 32) still remember how wonderful grandma was even when “boys would be boys!” In the picture below, we are heading to a fishing village, and it was in the 40s, but she bundled up and braved it anyway.  The lady was very special to all of us and will always be extremely special to me.  I love you, Sue! 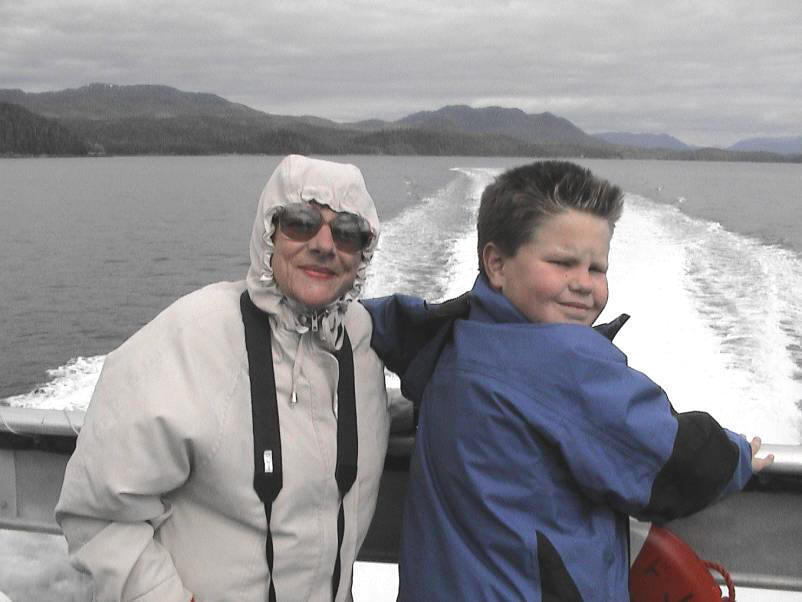 Time to be brave and call the SSA.  I was on the phone for what seemed to be hours explaining a situation. Well, after an hour and ten minutes, I got an explanation and sent in the data they were after.  All ought to be fixed within a week! The SSA folks were helpful, it’s good to see the government doing well! 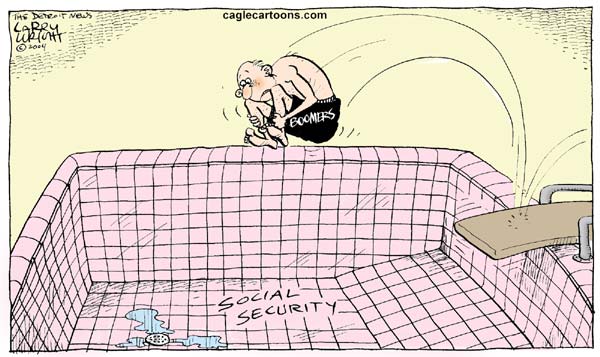 Colleen and I chatted for a while before she and Mark went off to lunch.  Nothing new on Jackie but I am betting the new great grandbaby will arrive on the 4th of July!

Hi ho, hi ho, it’s off to the garden I go!  At first gander, it needed some serious H2O.  I watered and cleaned up a bit plus figured out what to do with all the ripe veggies.  The corn is coming on strong, and the tomatoes are producing like crazy.  The tomatillos are ready, so I am taking them next door. Munching on berries is a must so I meandered over to the bite-me vines (name so because of their stickers) and ate two handfuls of beautiful blackberries.

The right-hand wall has the yellow crook neck squash I just picked, and they will be for dinner tonight!  In general, each plant produces 5 to 25 pounds of yellow squash during the growing season.

Did You Know? Though native to the western hemisphere, squashes began to spread to other parts of the world after Christopher Columbus’s arrival in the New World in 1492.

The English word “squash” comes from askutasquash which means “a green thing eaten raw”. This is a word from the Narragansett language, which was documented by Roger Williams in his 1643 publication A Key Into the Language of America. 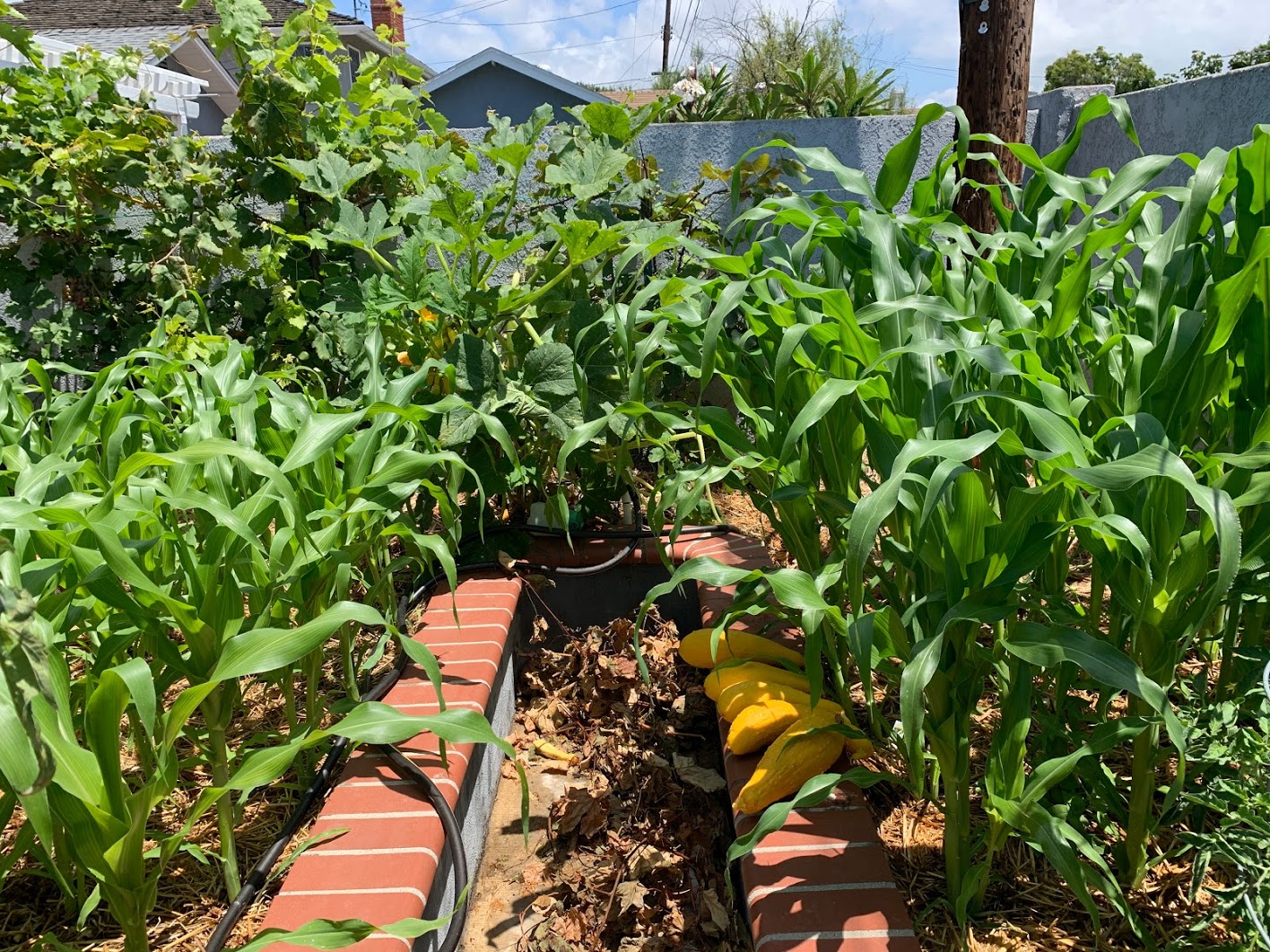 It is as high as a baby elephant’s eye!

I get hungry just looking at all the new corn.  Perhaps I will just roast tomatoes with a little olive oil, salt and pepper, and some spices? 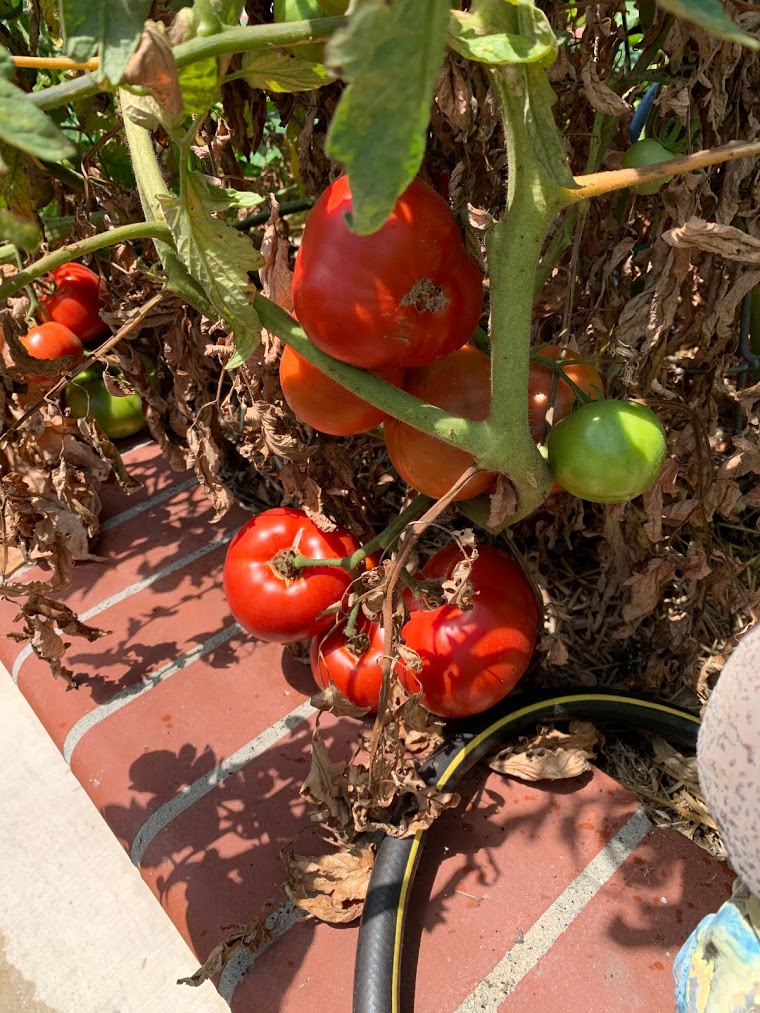 Tomato soup or on the top of a nice juicy hamburger? Along the wall, I have about twenty bunches of table grapes, so they will begin to come into the house and serve as snacks when I watch TV. 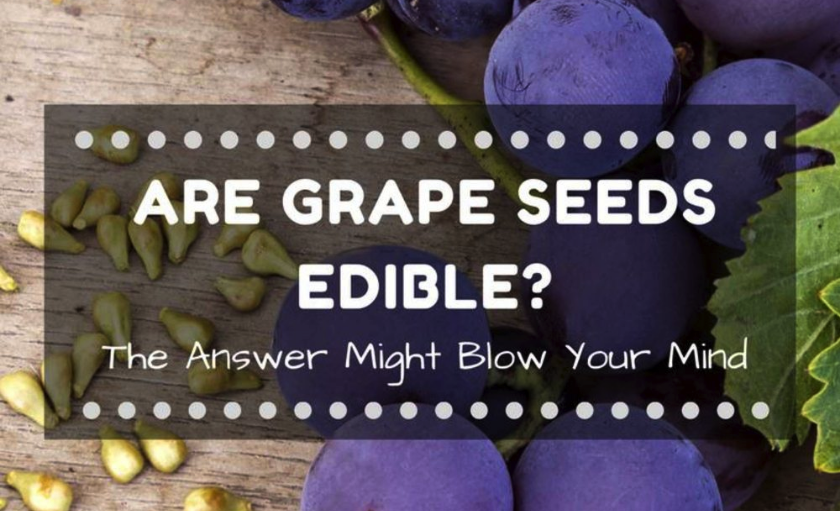 Did You Know? Yes, grape seeds are edible. You can find them in all seeded grape varieties like concord, black, and red grapes. These varieties are better than green grapes because they’re sweeter. But among the three types of grapes mentioned, the red grape seeds offer the most robust taste. The bitter taste of grape seeds is a good thing because it indicates a rich content of nutrients, like flavonoids and polyphenols. Since most people consider them unpalatable, you can get past the bad taste by eating the grapes whole. You can also take grape seeds in their oral liquid form, like grape seed extract and oil.

The day was cool but picking up the dead (previously trimmed) corn and grapes is a lot of work.  Somehow in my head, I kept thinking of simmering down so I sat for a few minutes.  Then the term “simmering-down” kept rattling around in my head, of which there is a  lot of spare room!  So, I looked it up!

Bob joined me around 1:00 PM as he had items to pick up today. He applied AquaDefense to the shower floor and walls plus several feet outside the shower. Mapelastic AquaDefense is a premixed, advanced liquid-rubber, extremely quick-drying waterproofing and crack isolation membrane for installation under ceramic tile or stone in residential, commercial, and industrial environments. Mapelastic AquaDefense provides a thin, continuous barrier to protect adjacent rooms and floors below from water damage. 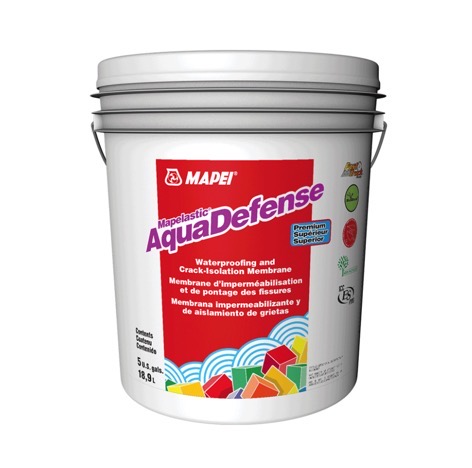 It goes on a magnificent blue and turns black when ready to go!

Bob showed his artistic side as he applies the second coat on the walls.  This is pretty amazing stuff and it will keep the tiles from cracking should we get a shaker in the future. 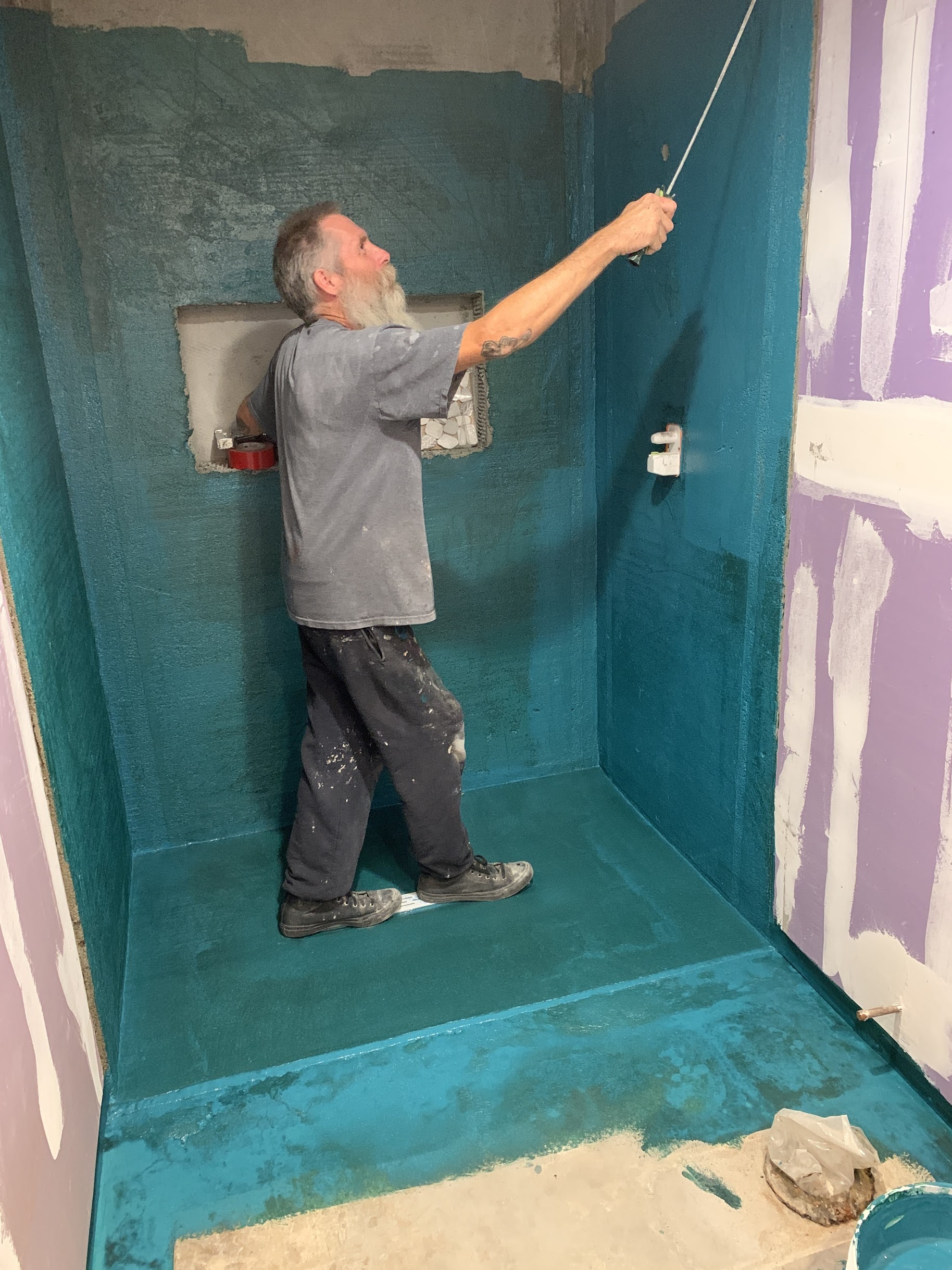 He is not tall enough for the Sistine Chapel!

One thing for sure, this shower will not leak!

I got several Amazon deliveries today, and the one I like best is a voltage sensor.  Not a meter but a device that lights up and beeps when it is close to a line with voltage in it.  It is so sensitive that it will tell which side of the Romex the hot wire is on.  This device goes into my electrical tool kit for sure.

I bought four of them! Green LED shows the unit is active, flashing red indicates live voltage. The VoltAware NCVtester is useful for identifying hot conductors, finding breaks in wires, and detecting the presence of AC voltage at outlets, switches, electrical panels, wires, and cables.

Where have you been all my life??

It’s now about 7:30 PM, so I decided the hot tub would help me sleep.   Like magic, just before I walked outside I said to myself, “Self, call Robin!”  Well, the ringy-dingy went ringy-dingy and it was Miss Robin. We talked on the bat phone for a bit making arrangements for lunch on Wednesday.

I feel so lucky to have the kids caring about me.  Today I got calls from Lisa, Colleen, Robin, Mitch, Joe, Michele, and also my grandkids call to check up on me (I wonder what they think I am up too?)

OK, it’s HTT!  That’s aerospace jargon for Hot Tub Time.  The recipe called for thirty minutes at 102 degrees to be well done!   I decided NOT to add onions or carrots tonight. 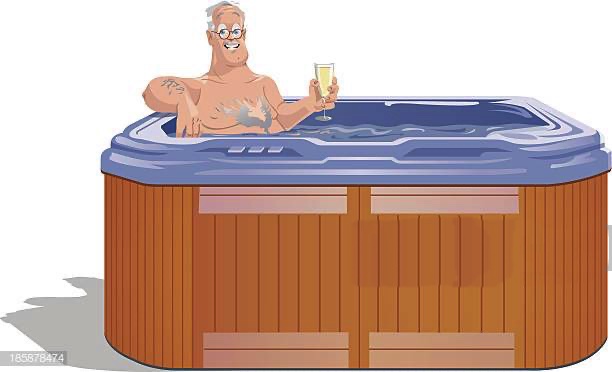 Just watching to sun go down and planning tomorrow!

I was as limp as a dishrag when the timer went off but managed to slink into the bathroom and turn on the shower.  Into my jammies, I went and to the living room to contemplate TV.  I selected a new movie entitled “Spy Like Me,” which was a Prime TV production.  I found myself laughing out loud and many of the scenes.  I enjoyed a cup of coffee as the movie progressed.

Summary: The film is about the ex-military JJ (Dave Bautista), who after his time in the army now tries to work as a CIA agent. During his missions he still works too much as a soldier. The CIA does not get the necessary information and decides to use JJ for undercover operation. JJ now has to spy on mother Kate (Parise Fitz-Henley) and her young daughter Sophie (Chloe Coleman) in the hope that her arms trade partner contacts his family. JJ is soon discovered by the clever nine-year-old Sophie, who promises to share nothing about his secret mission with the rest of the world. In return, JJ has to train her on how to become a spy herself.

After the movie, I worked on the Daily Diary, and I was off to bed at midnight.  I did make a decision NOT to go into the attic tomorrow until AFTER the LED floodlights show up.  I am now worried that all I will need is a single lamp since it is 11,000 lumens or almost two-and-a-half times the brightness of Joe’s back yard.  I do NOT want helicopters flying overhead looking for a football game!

Just a thought to leave you with this evening!

Just an old retired guy trying to finish out my last years on this planet. I lost my best friend and wife in early 2020. I was blessed again by reconnecting with Dr. Mary Côté, a long-time friend. Mary and I got married July 28th, 2021, and are enjoying life together and plan to spend the rest of our lives being a blessing to our friends and family.
View all posts by Paul →
This entry was posted in Adventures, Gardening, Movies, Working Around House. Bookmark the permalink.