The Week Begins With Work!

“No matter how bad your heart is broken, the world doesn’t stop for your grief.”

Many times we would jump in the car and go on “vacation,” taking two or three days and just drive.  On our first journey Sue was terrified as we had no “reservations,” so where would we rest.  I taught her that there is always a nice hotel with a great surprise just over the hill.

We found a fantastic hotel in Sedona, Arizona, after driving for twelve hours from Carlsbad, New Mexico.  The hotel was not quite open yet, but I popped in and asked for a room, and we got it.  They told me they were not open yet, and I pleaded with them. It must have been my alligator tears. We have three bedrooms, a full kitchen, on a small stream with a bazillion blackberries.  There was a hot tub, and golf was four miles away!  No reservations needed, and we were their first, and probably an unplanned, guest.

From that point forward, Sue never worried about a place to stay for having to have a “detailed plan” for our trips.  She trusted me, and I took care of her; we were a team, an outstanding team! 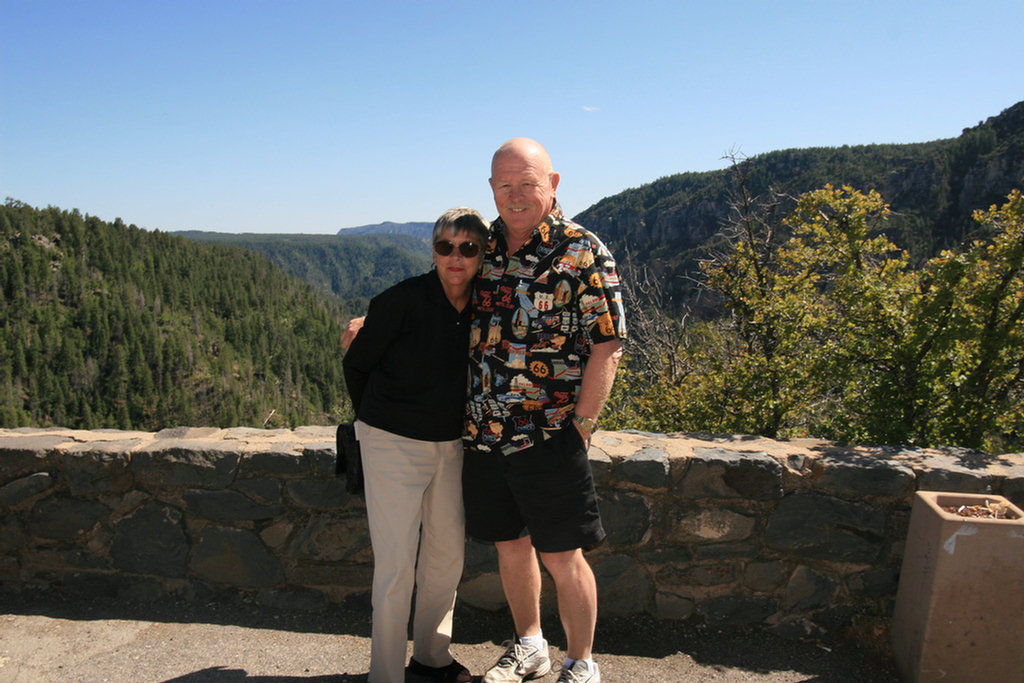 She adapted to me with ease. We are at a rest stop overlooking the road into Sedona.

When Kat was in the hospital, Sue and I moved her into an assisted care facility as she could no longer live alone.  Zack and Mitch also helped us.  In her “junk,” I found this Family Tree document recording the marriages, births, and deaths of the Liles/Essig family. It is worn but quite readable and now resides in my bedroom next to a picture of Sue and me.  I am going to try and create one for the Lewis side of the family also. 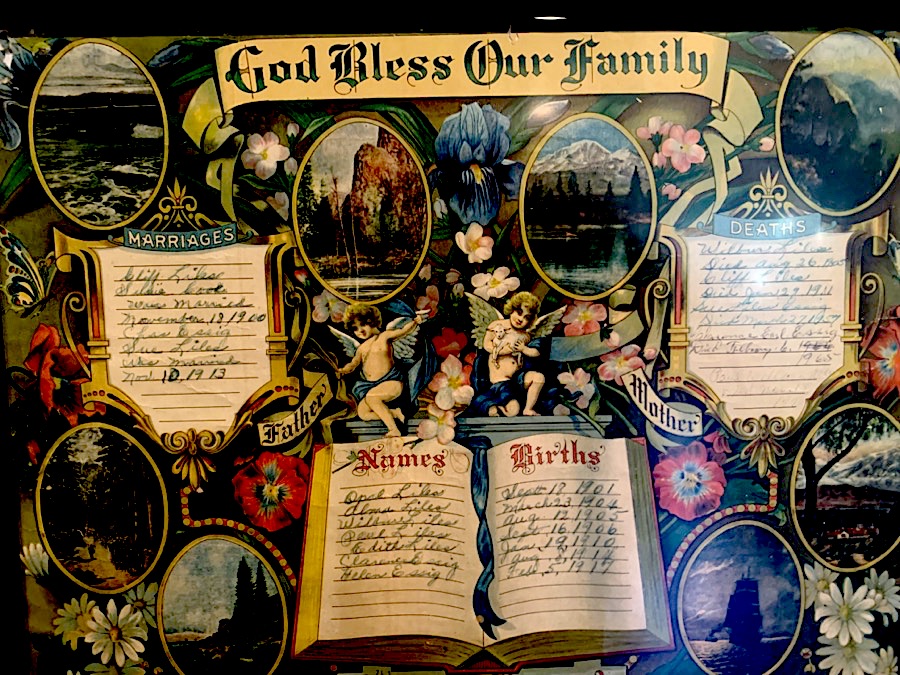 I found this old document in KAt’s house many years ago.

Grandma Mary Cook was married twice as her first husband, Clifford Liles, died in 1911 when Dad was only five years old.  When I was talking to my cousin, he did not know that there was a Wilbur Liles who passed about a week after being born, in the year 1905. 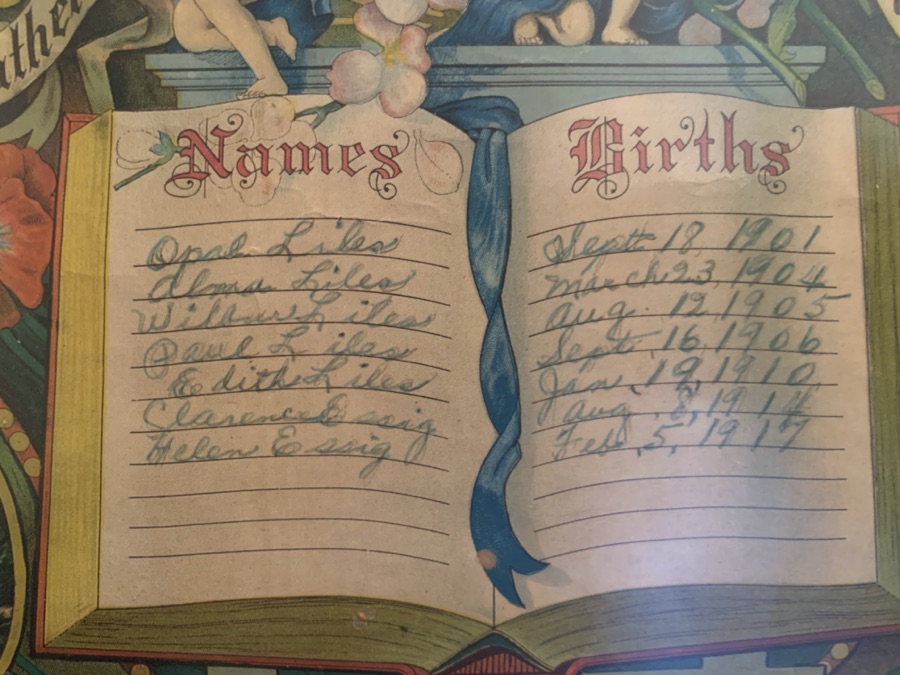 All the Liles family details.

I got down to work and finished most of the insulation in the bathroom covering everything except the area where the medicine cabinet will be going, and the plumbing for the shower will be installed. 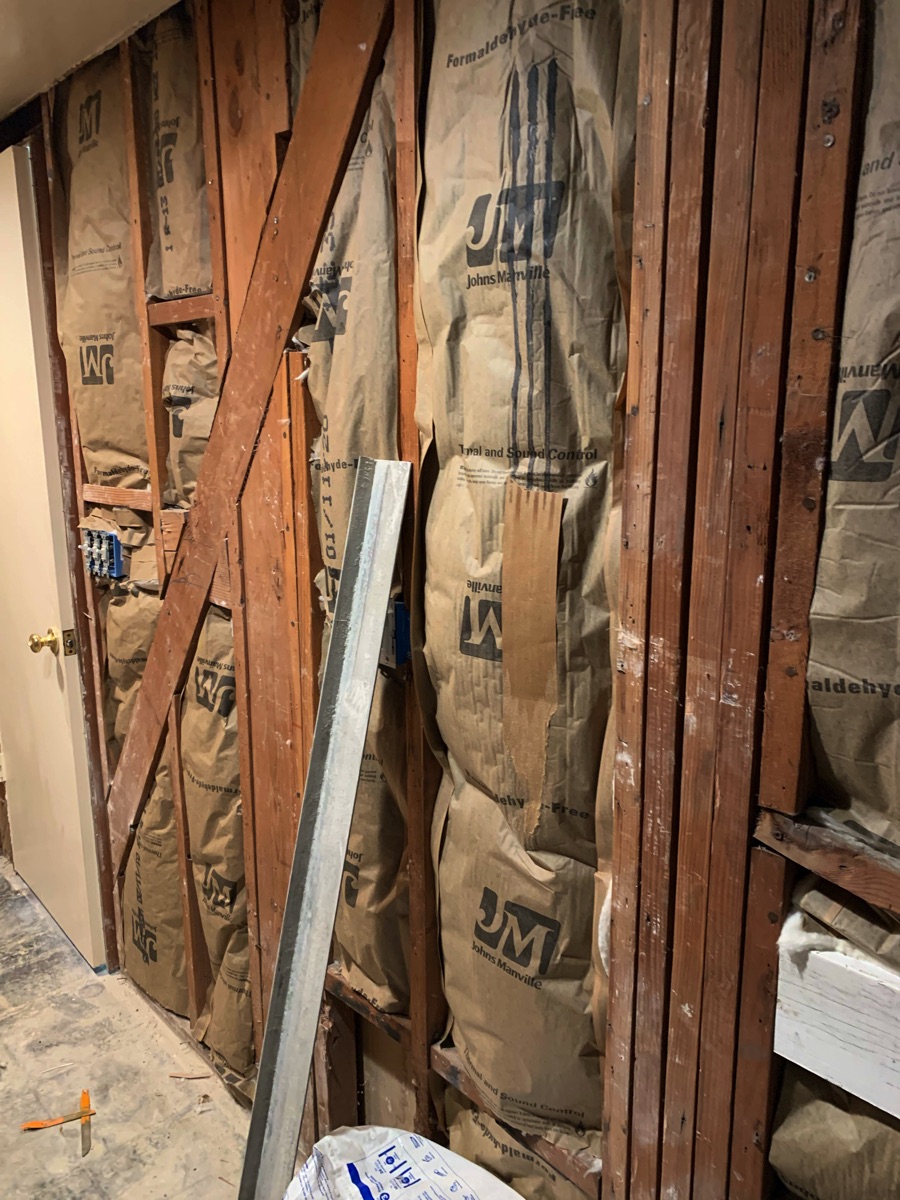 No noise will escape the bathroom now!

The room will be clean and ready to rock and roll with the pouring on the final concrete coat as soon as Bob returns from Texas. 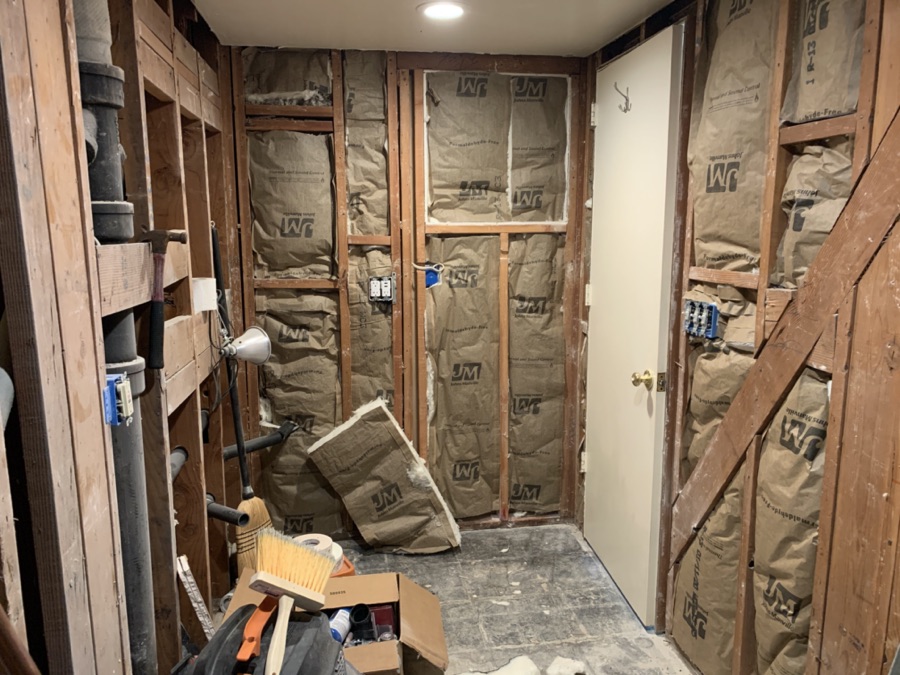 Yes, I used gloves and a mask while installing the fiberglass.

I fixed ham, bacon, and eggs for breakfast and enjoyed some pomegranate juice to wash everything down.  A quick trip to the garden brought in some corn, which I just threw in the microwave for about four minutes, and it was ready to go, no butter needed! The pillboxes were empty, so I repopulated them from the last stash in the bathroom!

Ila texted me, and she came over the visit and brought me some jelly and jam plus some Pattypan squash.  I sent her home with plenty of corn, crookneck squash, and a load of tomatoes!  She, Sue, and I got to know each other for the past several years, and we got her started in growing veggies.  Now we trade secrets and foods all the time. 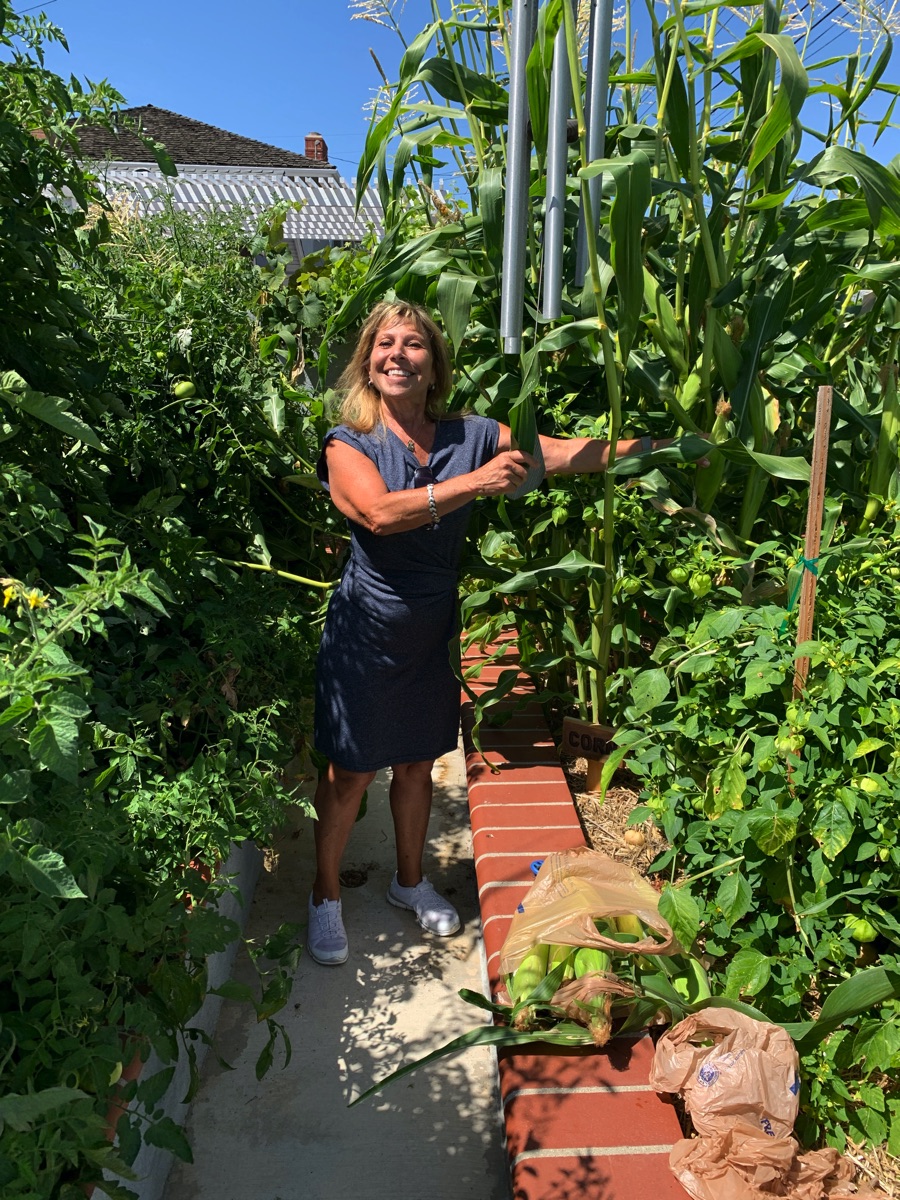 Ila got some great corn today!

All afternoon I chased electrons.  The main box is going to be switched next week, and the guys have to label all the circuits, so I beat him to the punch, plus I wanted to see where everything went before he fit.  Geez, what a rats nest.  We have 2,000 square feet plus now, which is too big for me, but I plan to stay.

When the house was built, it was an “all-electric” house meaning electric dryer, stove, oven, water heater, etc.  I found two 220V 30A circuits in the box, and one supplies power to the LED overheads in the kitchen. Talk about over wired!! 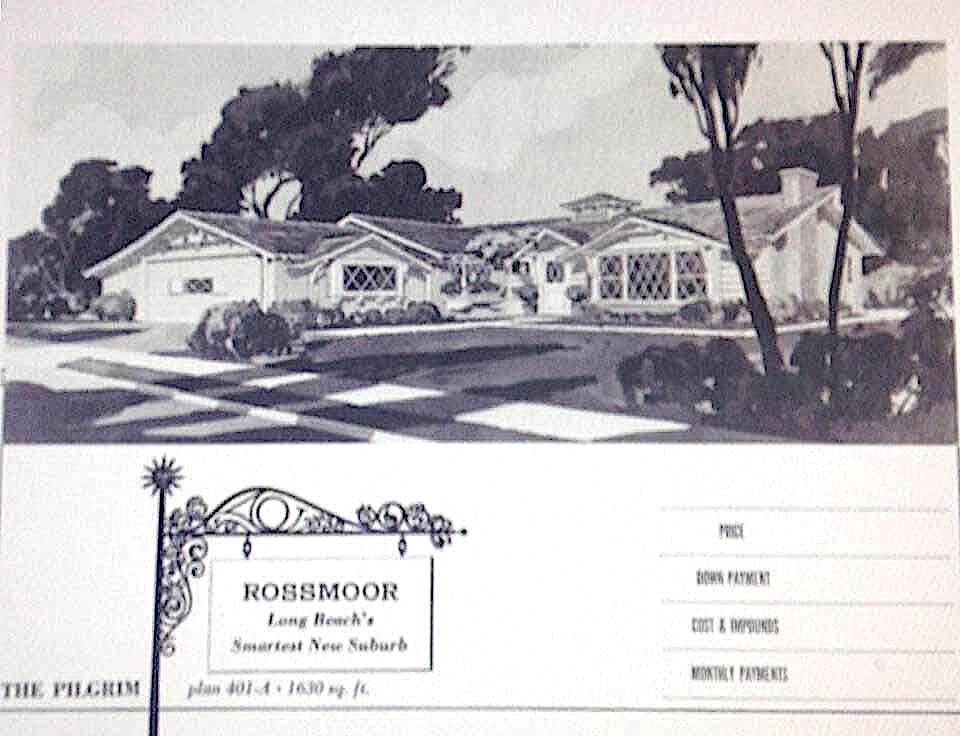 The home has been remodeled several times.

After four hours of running back and forth, I stopped, rested, and a couple of yesterday’s meatballs, and then walked over two miles.  The walk felt good! 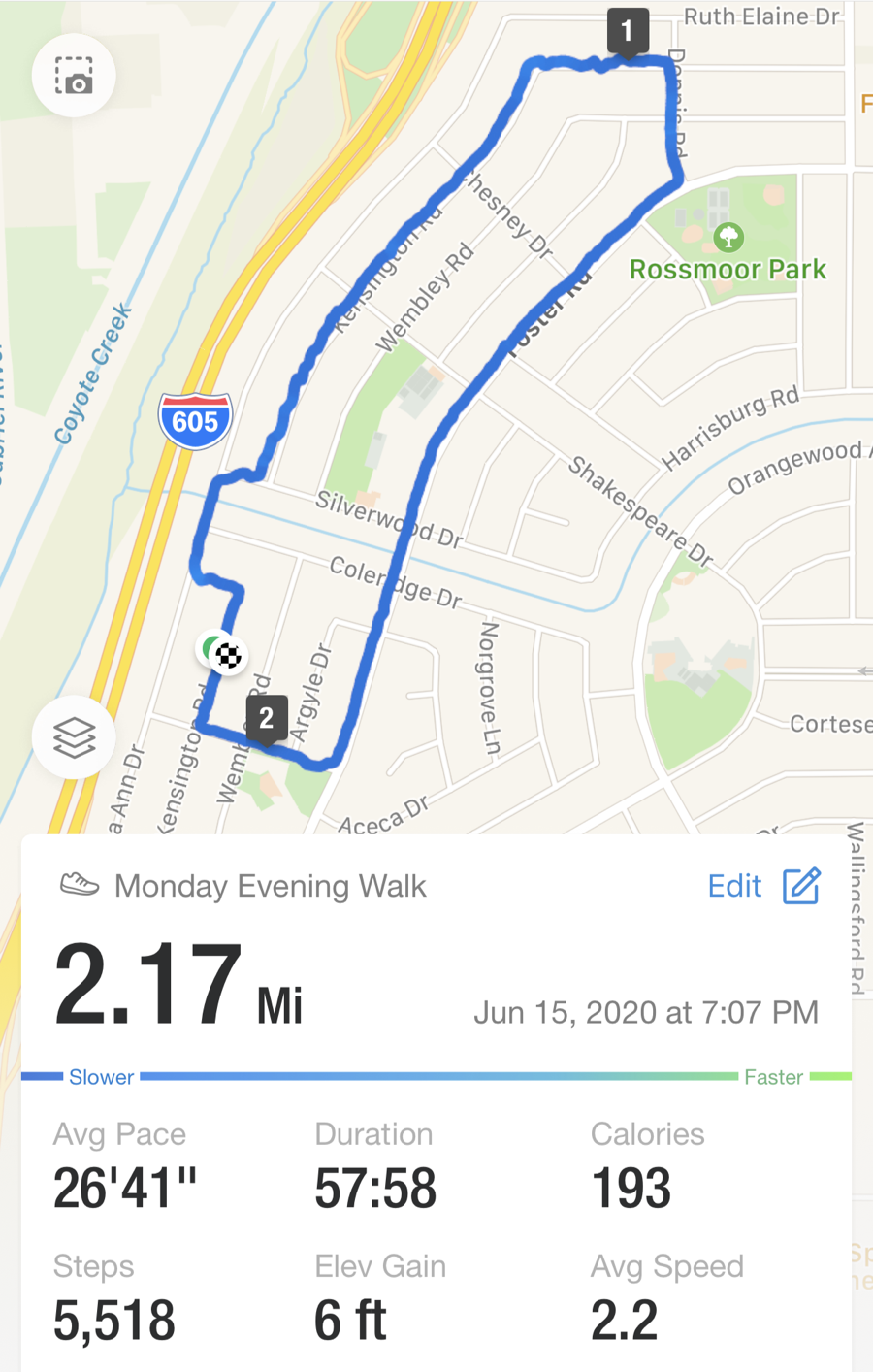 Between working around the house and the walk, I recorded almost 10,000 steps.  I can see 192 pounds flashing on that mean little weight machine in the morning. I must remember to bring it an offering before stepping on to get the news. 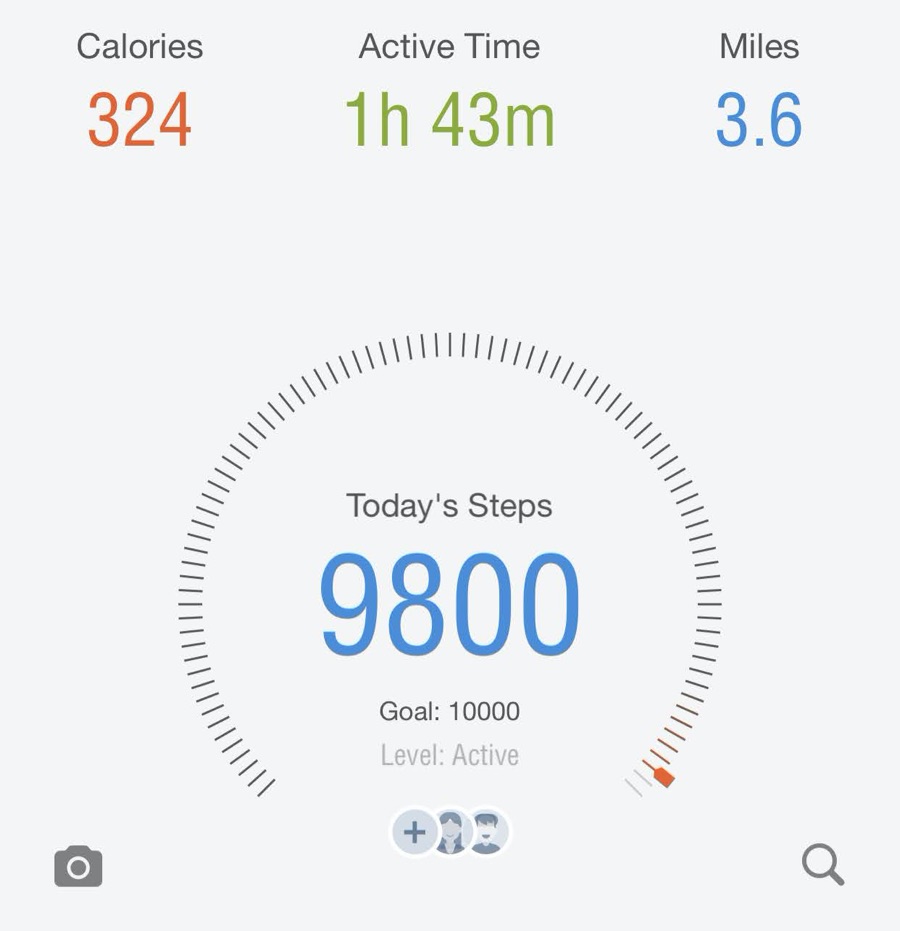 I made the 10,000 steps because I walked around the house while the phone was on the charger!

When I walked up to the house, I stopped and sat in the nation for a few minutes and called Joe.  We talked for thirty minutes before I went inside.  I did a selfie as the sun was lighting a cloud beautifully to the north of the house.  Michele called and said this picture looks like the Leprecahn about to grab the pot of gold at the end of the rainbow. 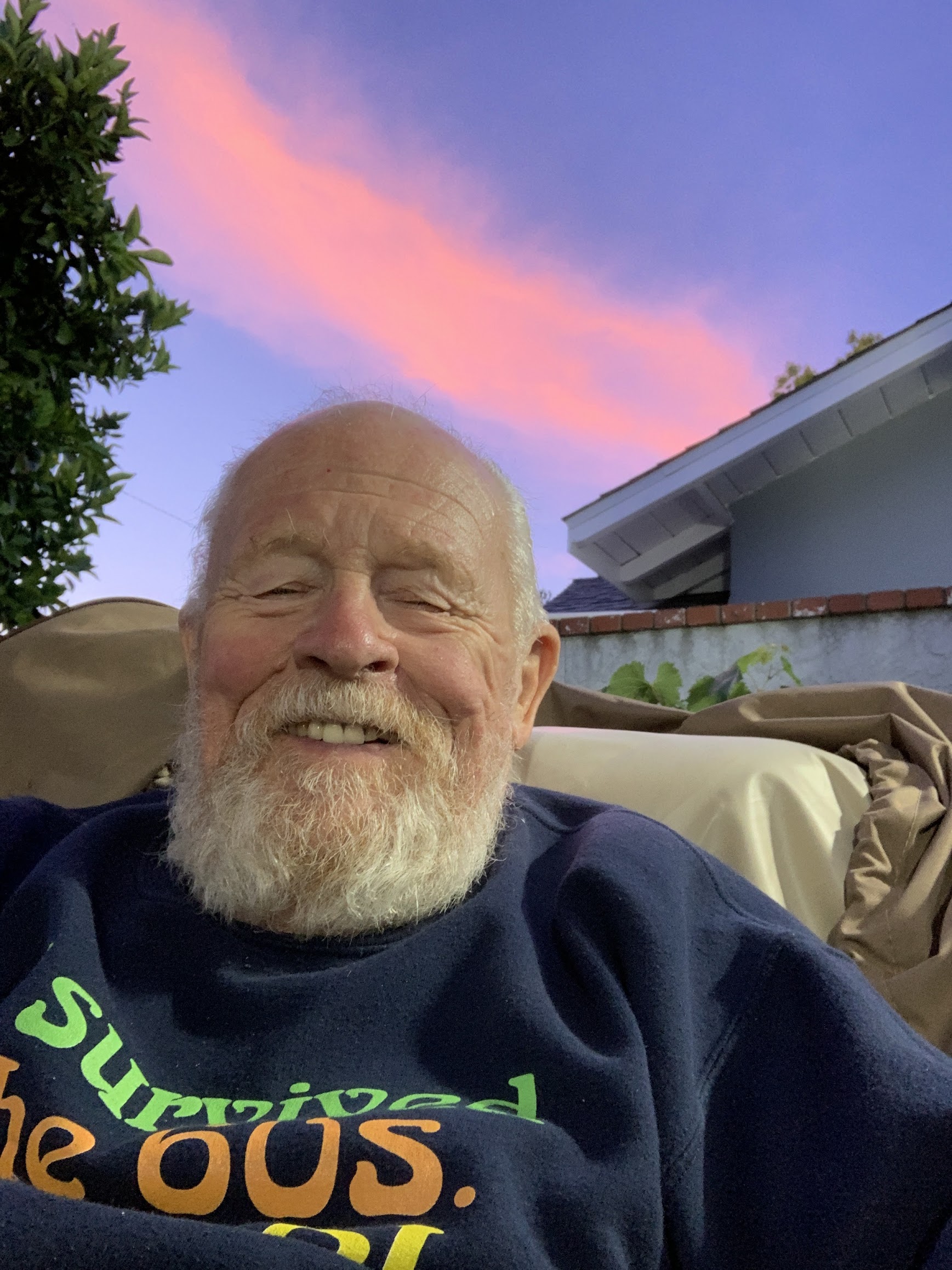 I am wearing my “I Survived The 60s Twice” sweatshirt!

After the walk, I watched “What A Mess” and then did the Daily Diary before crashing at 10:50 PM.  Tomorrow I must go up into the attic and find out where the messing circuits are going and map out the subpanel I have over the living room.  I plan to do battle with the wiring about 6:00 AM before the sun bakes the roof and the attic becomes an oven!