“We do not have to rely on memories to recapture the spirit of those we have loved and lost – they live within our souls in some perfect sanctuary which even death cannot destroy.” – Nan Witcomb

We traveled and saw the world together.  The only place we wanted to see was Mount Rushmore, so I plan to drive there perhaps later on in the year.   Below is Sue entering one of the locks in the Panama Canal, a trip we took four times.  We loved the canal and stopping at the various ports along the way.  We especially like the dancing as we took Crystal each time, so it was dress-up every night!

Sue would stand at the edge for hours, amazed at the ships bobbing up and down like corks as the water gushed from Lake Gatun into the locks or drain from the locks into the ocean.  Always with that precocious smile, which put everyone at ease and made it so easy to make new friends.

I wish we could take one more cruise, but alas, that can’t happen.  I will just dream about it as I dream about Sue and me meandering the decks late at night listening to the sounds of the sea.  She was a fantastic person, the love of my life! 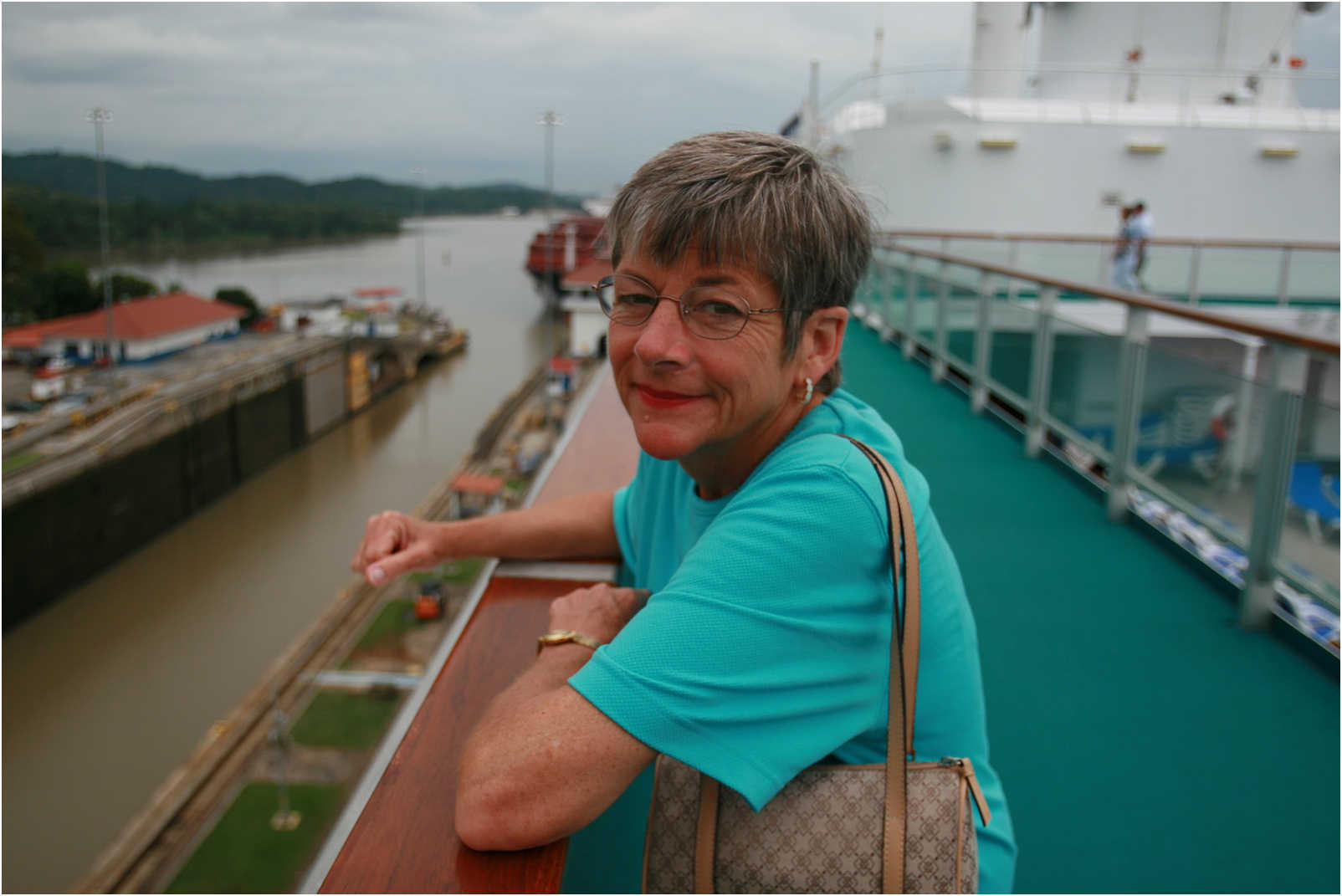 Amazed by the Panama Canal

Today is going to be busy, so I started by cleaning up the front walkway, organizing the tools and materials needed to finish the job, and moving over 1,000 pounds of concrete and drywall to spots where I can wash everything down with a hose.  The ninety-pound bags of cement used to weight only ten pounds when I was in my 40s, but now, they are back to ninety-pounds! 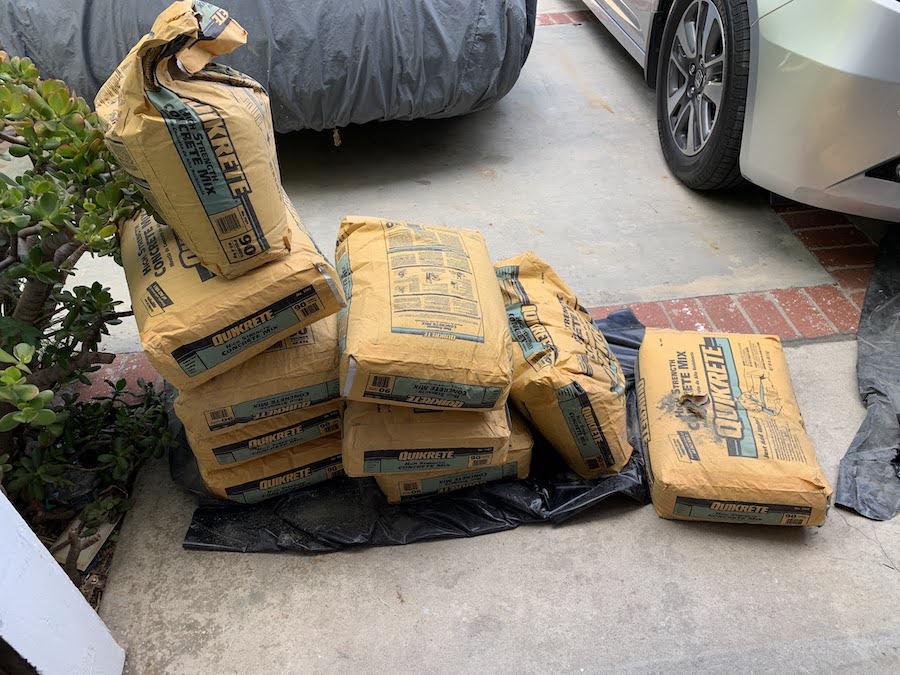 It was a job moving there around to the driveway!

Now that the drywall is restacked and up and on the brick, the high-pressure hose will clean up the concrete dust.  I also rinsed off the leaves were concrete has splattered.  The walkway looks OK now! 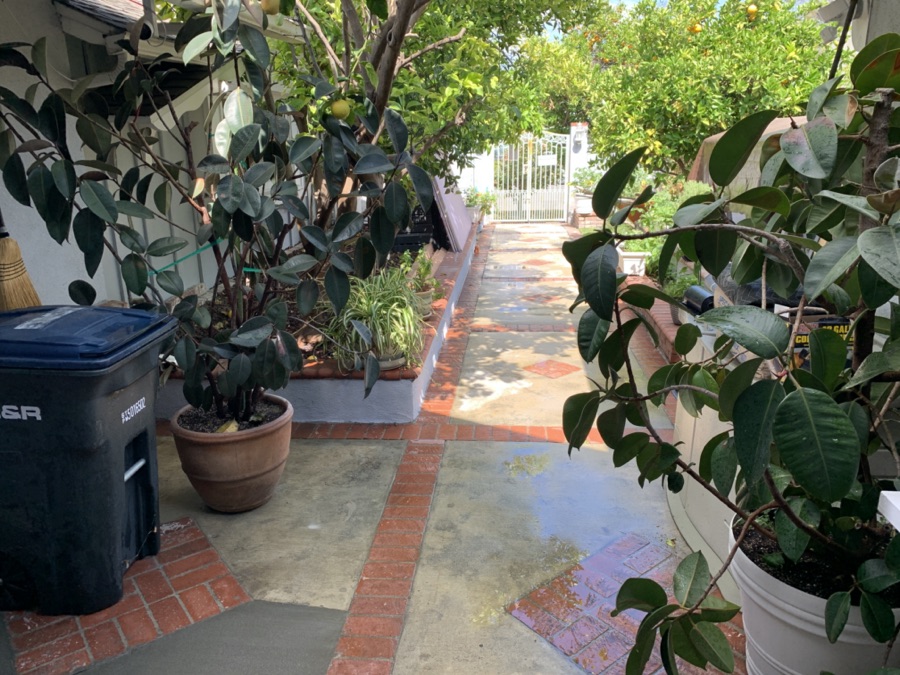 Clean as a whistle now.

My shopping list was getting large, so I wandered over to Ralph’s.  The Silver Ghost was ready for the morning outing.  I saw a miracle when inside the building.  Then a shiver came over me, a feeling of extreme worry.  Panic began to set in!  What is happening? 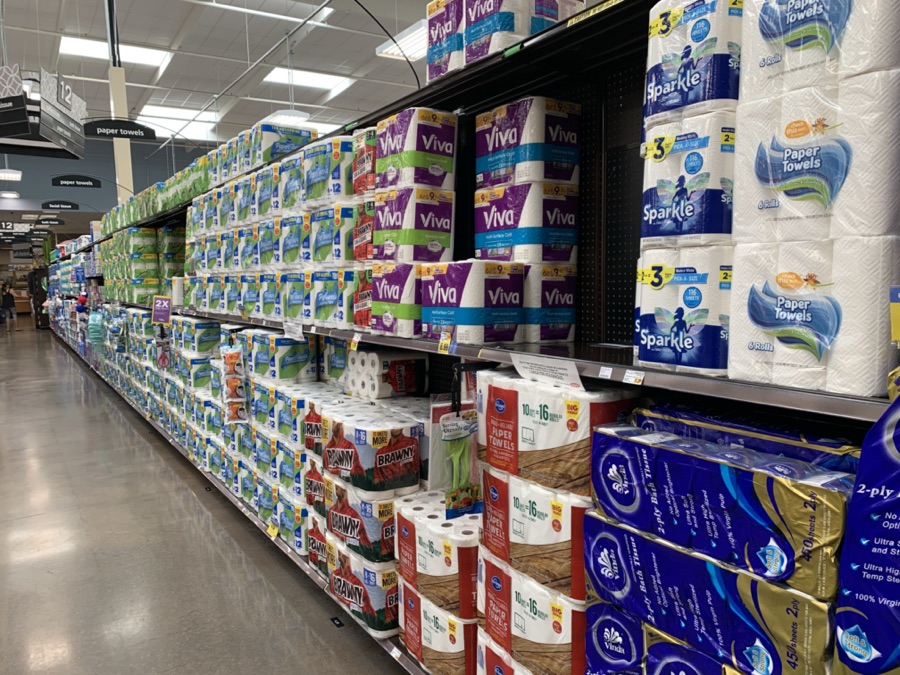 Yes! Hallelujah, the TP aisle is full! Are people not pooping?

It finally dawned on me that the “Great TP Event” was not over, and the world will return to normal.  It was confirmed when I saw that we had baking goods available again, plenty of flour.  I could not find Wondra yet, but I am guessing that it is not too far away!

I put everything away, and by now, I was getting hungry, plus I was attempting to eat at the exact time so I could play golf later and then go for ice cream at Joe’s movie night later and not be hungry.

I lept to the refrigerator and pulled out the makings for Firecracker Meatballs
with Roasted Green Beans & Sesame Rice.  The picture looked yummy, and the ingredients interesting. 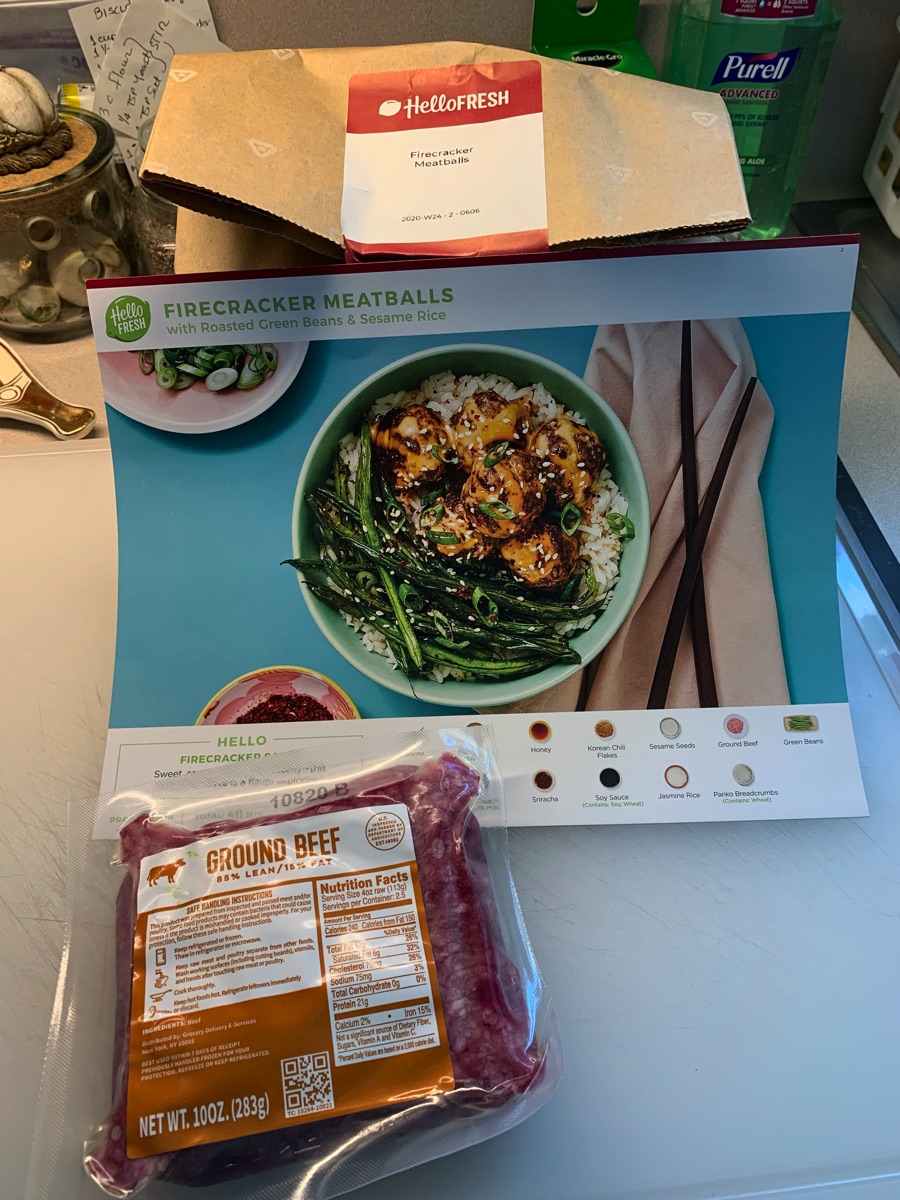 The ingredients are already measured, for the most part, but sometimes they have to be separated.  The makings are all quite fresh and good quality. 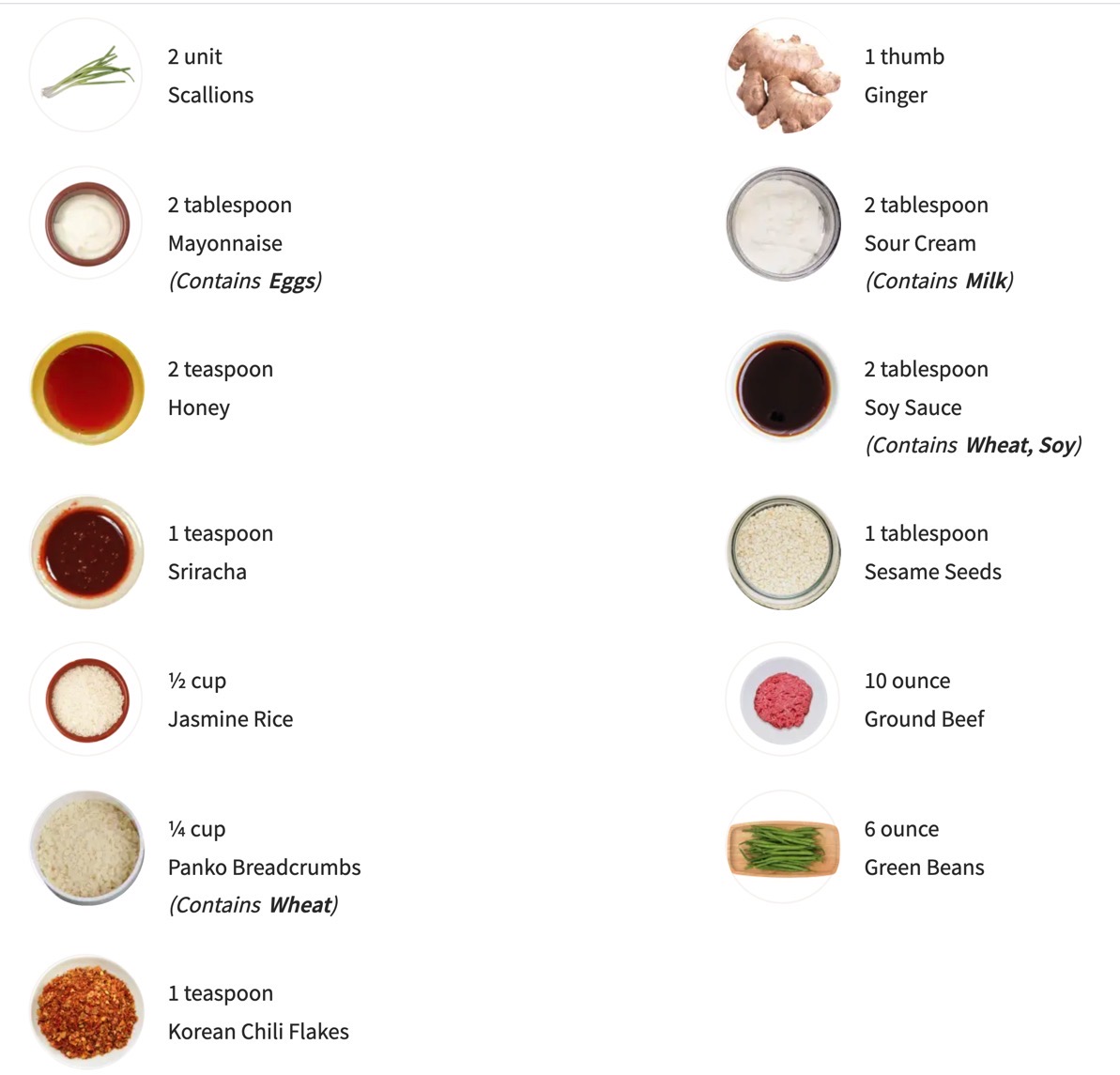 I began to work slicing and dicing and creating a mess.  I love the sesame seeds being roasted and then added to the wire rice; it makes are a pretty dish! 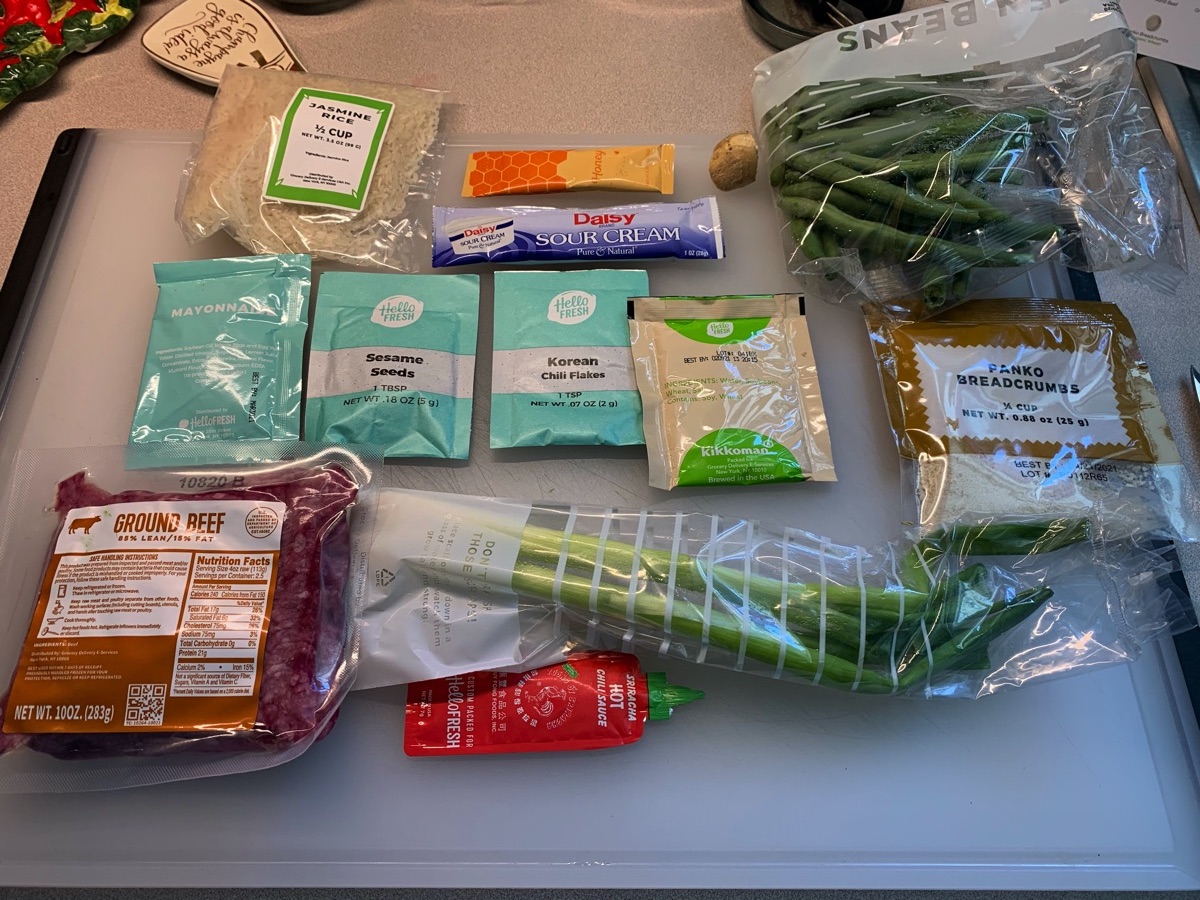 Laid out and ready to go, this technique is my hero!

About a half-hour later, I am ready to dine.  I platted both servicing and vacuumed sealed the second one for later this week.  Note to self: Next time I make meatballs, make sure the bowl is big enough for my hands to reach in and grab the makings. 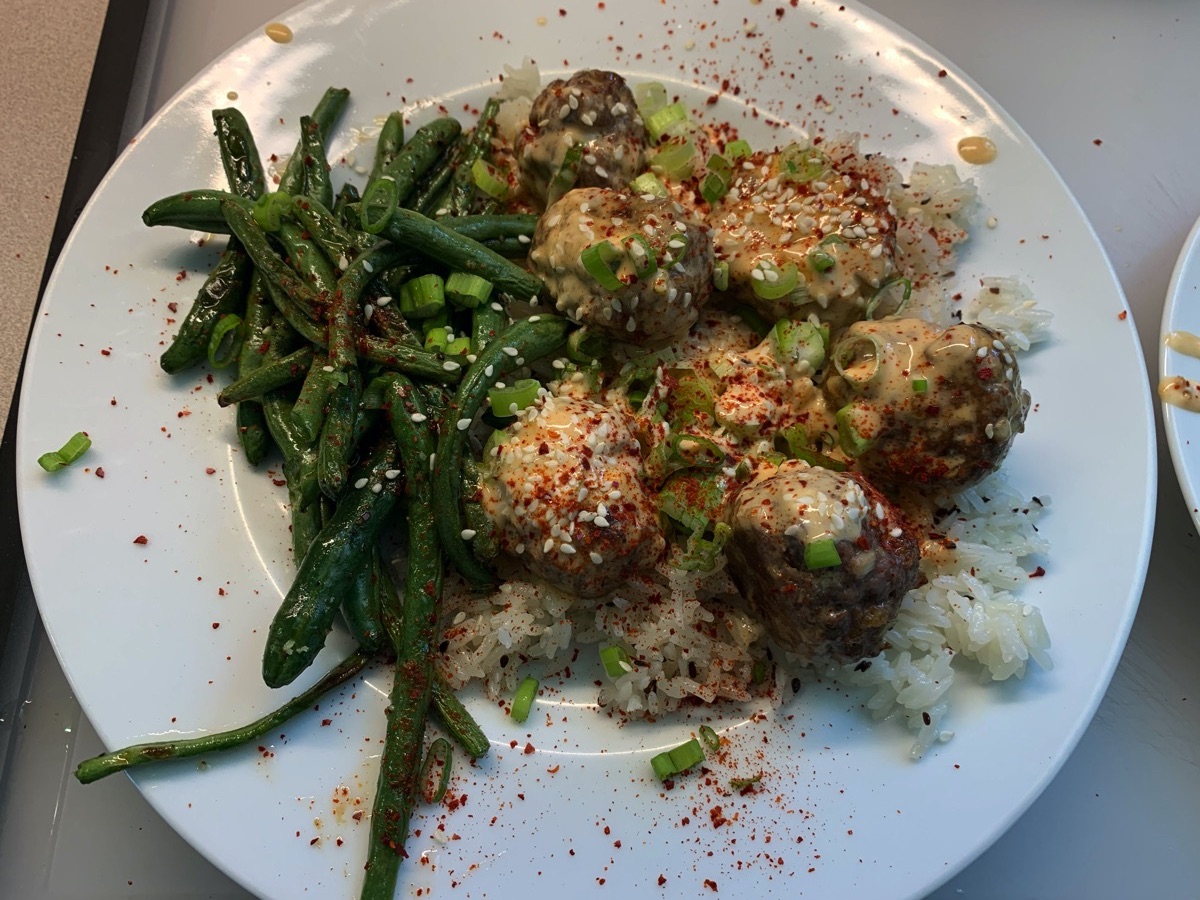 A meal fit for a king!

It was lunch, but I threw caution to the winds and served up some real white wine, an excellent Chardonnay plus I fired off the candles. 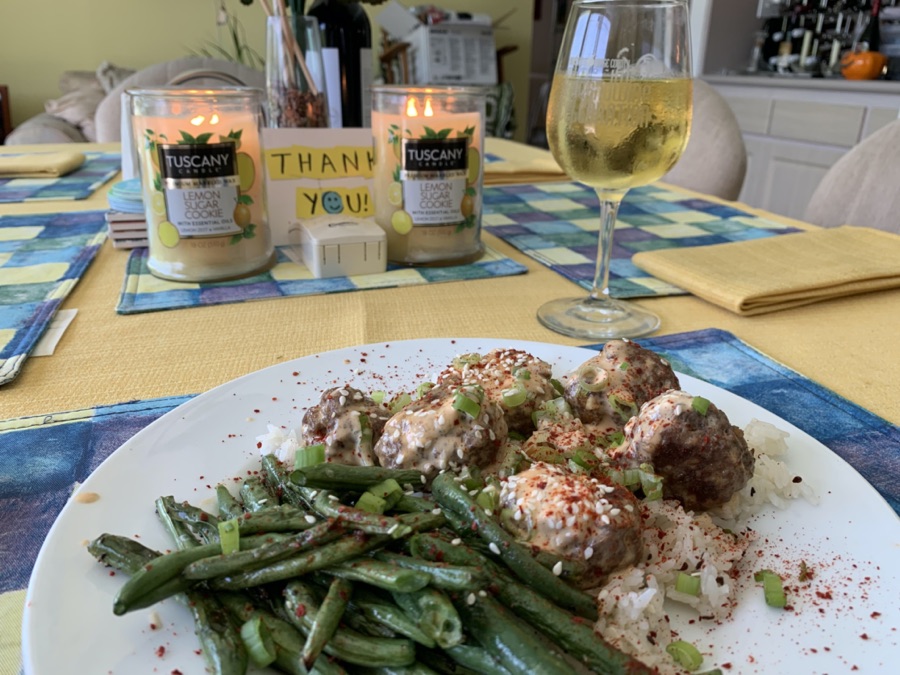 I took my time and savored the vittles!

Did You Know? Vittles is an ancient word for food that we tend to associate with the rural South, cowboys, pioneers, mountain men, and the like. It comes from Middle English, by way of French. … It has been used in English since at least the early 1300s.

Now I am off to the golf course starting with a drink at the 19th hole with Charlotte. 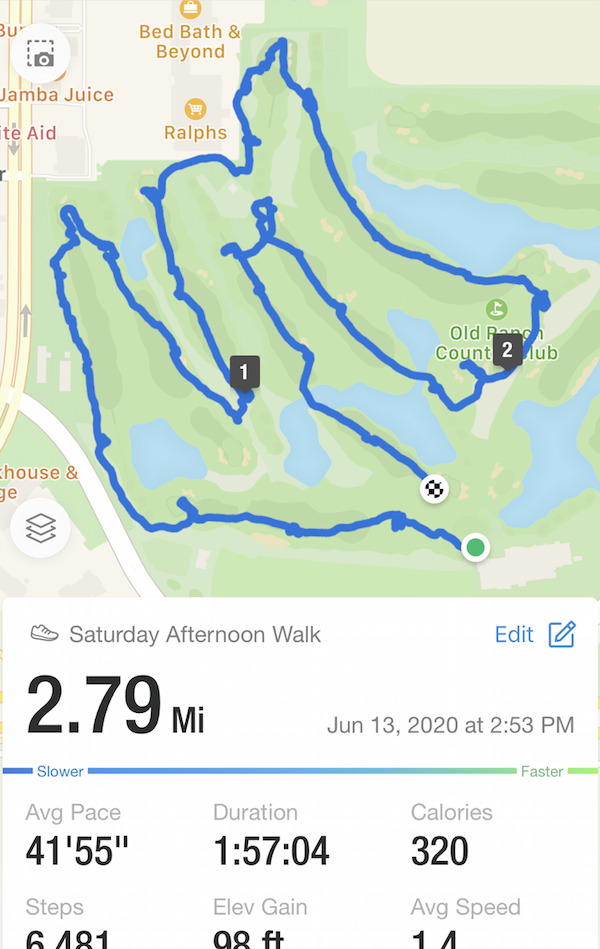 It was a good game!

The plant below is called Leonotis leonurus, “Lion’s Ear.” Leonotis leonurus, commonly called a lion’s ear, is native to South Africa. It is a tropical shrub that can snowball to 3-6′ tall in a single season from seed planted in the garden in early spring. Tubular two-lipped orange flowers (typical mint family) appear in tiered whorls that encircle the square stems. 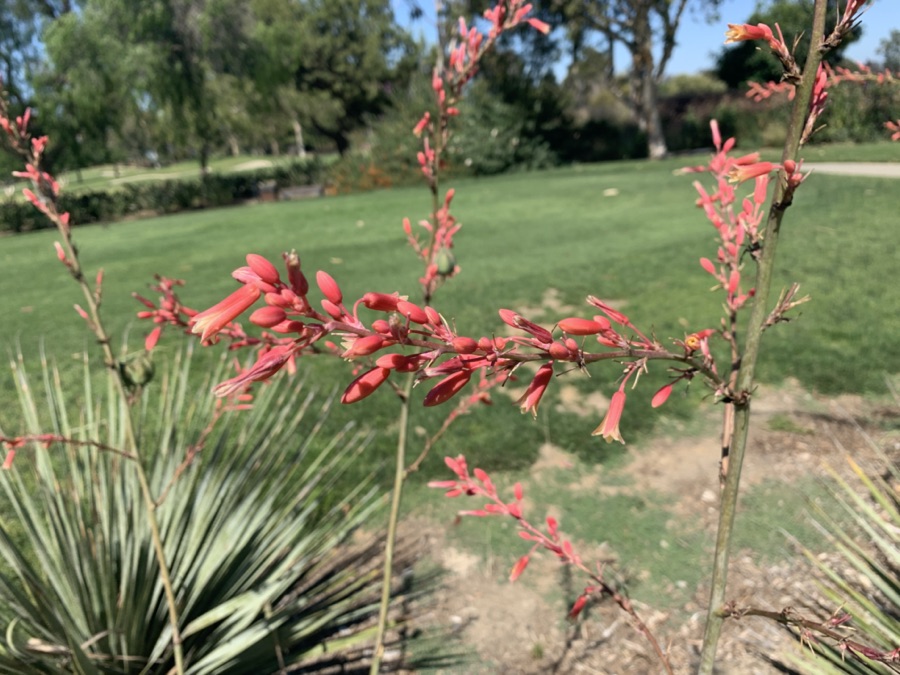 We had a lot of fun playing, and I outdrove Charlotte one time! It was magic!

The Silver Ghost and I raced home, freshened up, and headed to Ralph’s as I have ice responsibility this evening. 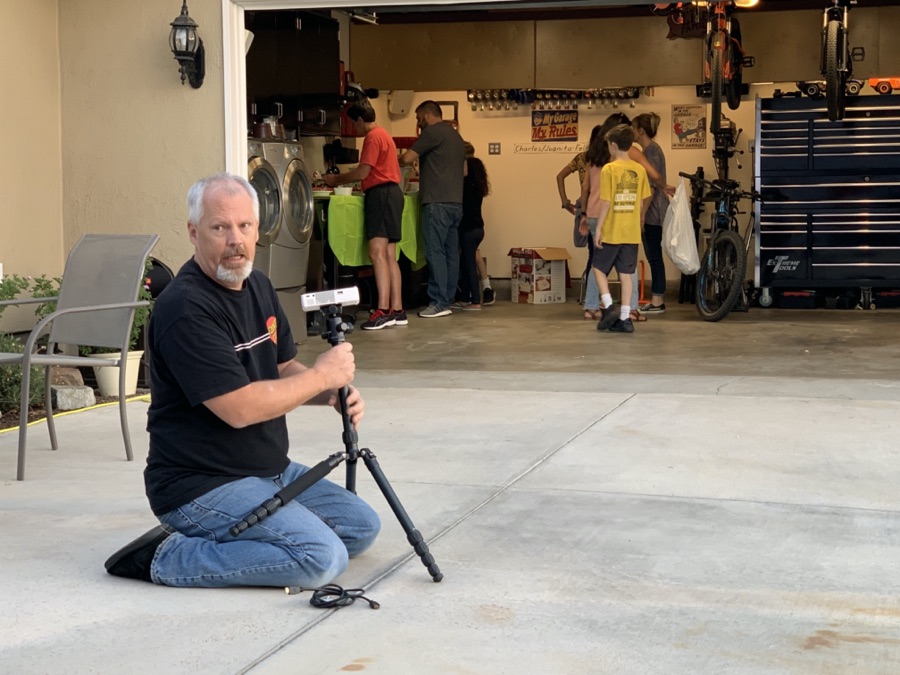 The movie man gets down to work!

As they put together the screen, I was not sure how they would get it out of the garage.  With a quick flip and a load of verbal coordination, the screen frame came out without a hitch! 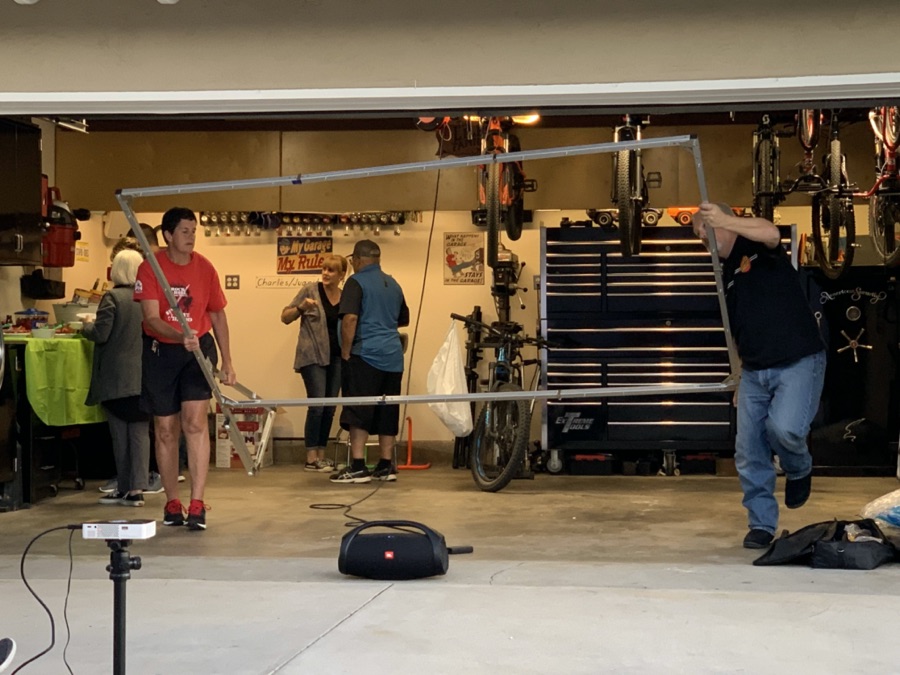 It is Ice Cream night, so everyone brought toppings. I was attempting to be creative. I brought Artichoke Hearts!  I can’t figure out why the package was unopened at the end of the evening?

Notice the single bottle of red wine remaining!   When you see Amy ask her about “The Great Wine Oops!”   You can jog her mind by stating that wine sediment is an entirely natural occurrence – it’s mainly just leftover grape bits. These wine lees (or dregs) are simply part of the winemaking process and are not harmful in any way, nor do they affect a wine’s taste. 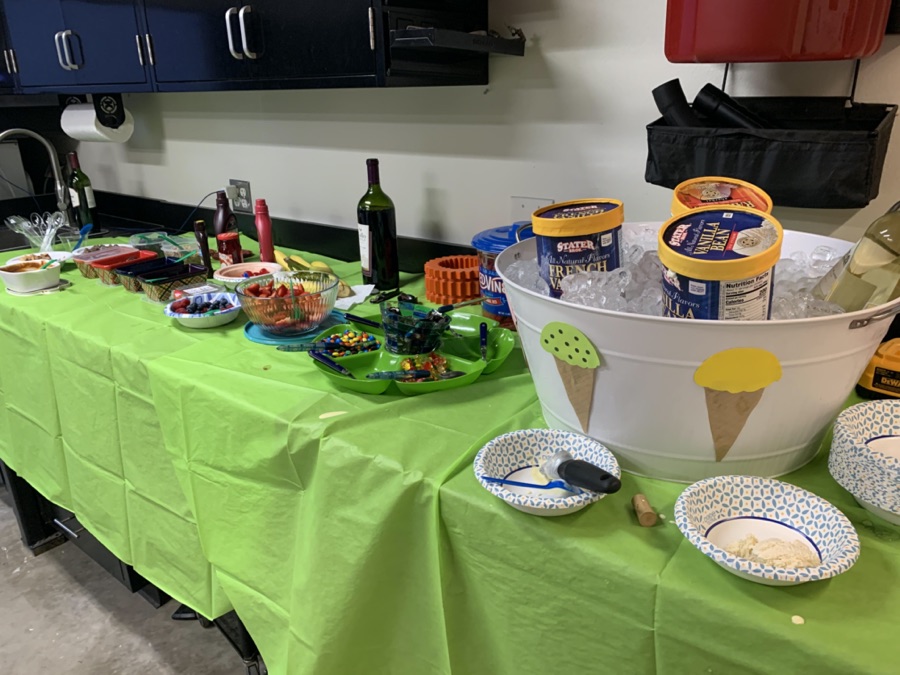 We saw “A Dog’s Purpose.” Summary: A dog looks to discover his purpose in life throughout several lifetimes and owners.

Our tummies were full of ice cream; the stars were out, let it roll.  A great movie with great people!  A delightful evening. 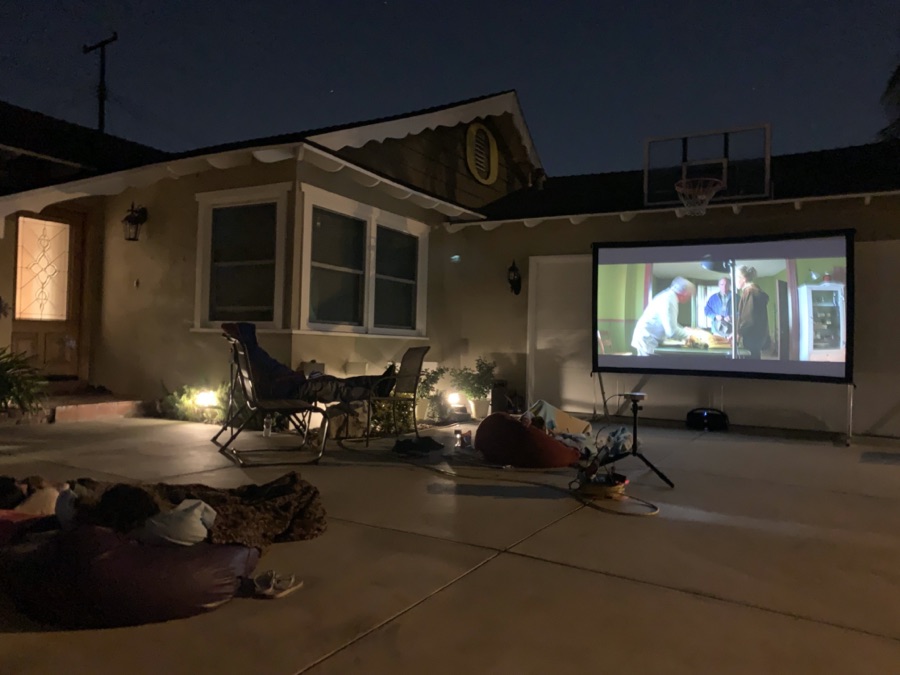 I stayed awake the entire time.

After departing, I took the 91 to the 605 home and opened my front door at 10:45 PM, at which time I followed Jor’s instructions; I texted to say I made it.

My Keurig rattled and spoke to me, saying. “Time for your hot chocolate!”.  Being a dutiful coffee-maker-owner, I followed directions.  I ended up weather three episodes of “Anne with an E” and crashed at 1:15 AM.

Just an old retired guy trying to finish out my last years on this planet loving my best friend and wife, having fun, learning, and passing on helpful things to others.
View all posts by Paul →
This entry was posted in Cooking, Family, Movies, Working Around House. Bookmark the permalink.
Powered by Maribol IMDB Plugin