All I needed Was A Half-Inch More!

“The fact that something has happened to a million other people diminishes neither grief nor joy.” – Author Unkown

Sue has a great sense of humor, but it was reserved for special occasions and generally when you least expect it!  She made me laugh all the way down to my toes when she would fire off a zinger!  When I would get all riled up, she would provide sage advice, followed by a stern warning. I miss that one-on-one we had all day long.  I miss that constant smile, which made all the boo-boos in life go away! She was indeed special!  I love her so much. 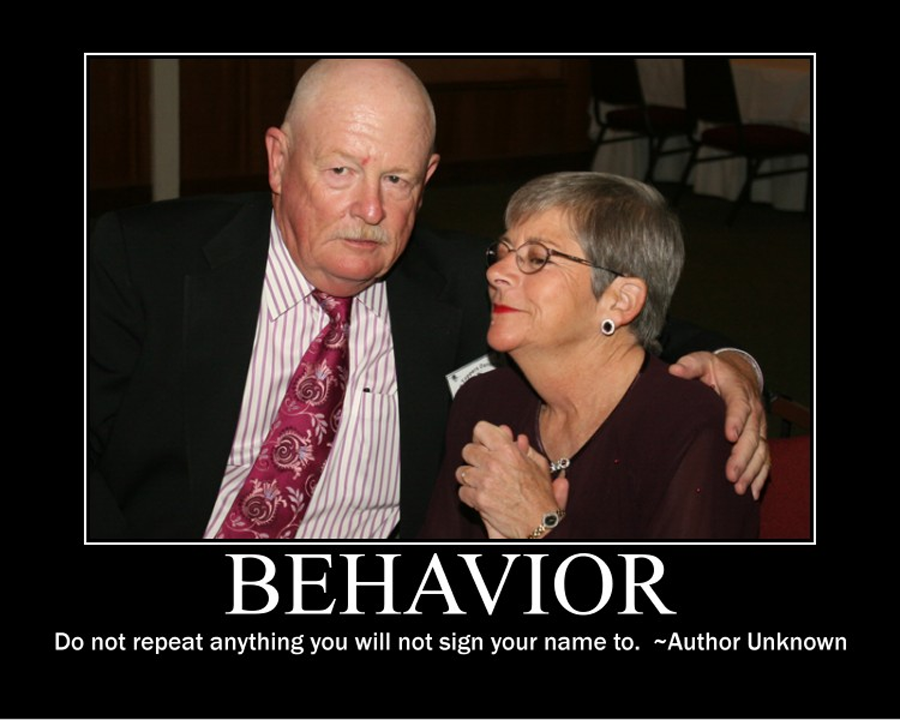 After reading the paper, I quickly sent the following cartoon to Rebecca and Zack!

I started in the backyard garden and worked from 9:30 AM until 2:30 PM, putting in the rest of the corn and trimming or arranging the branches of the tomato plants.  Yesterday I traded my yellow crook-neck squash for Vicky’s homemade burritos and guess what I had for breakfast this beautiful morning?  Vicky is quite the cook. 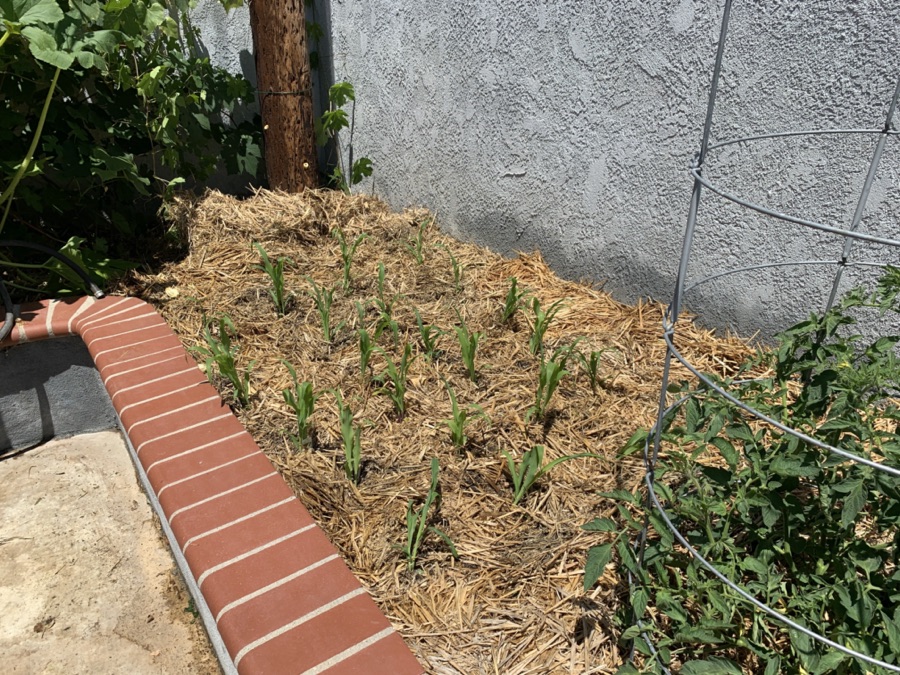 The new corn is now planted! It is a 4×6 plot so we will have to see what happens.

Yellow crook-necks are my favorite summer squash, bearing many lemon-yellow, 6-inch fruit, with a slightly bent neck that earns it the name Crookneck. The plants are fast-growing and very prolific. They can be harvested all summer long. Delicious steamed with nutmeg or fried in slices and sprinkled with parmesan cheese and crumbled bacon. I harvest them while skins are soft. I keep the plants picked, so they keep producing. 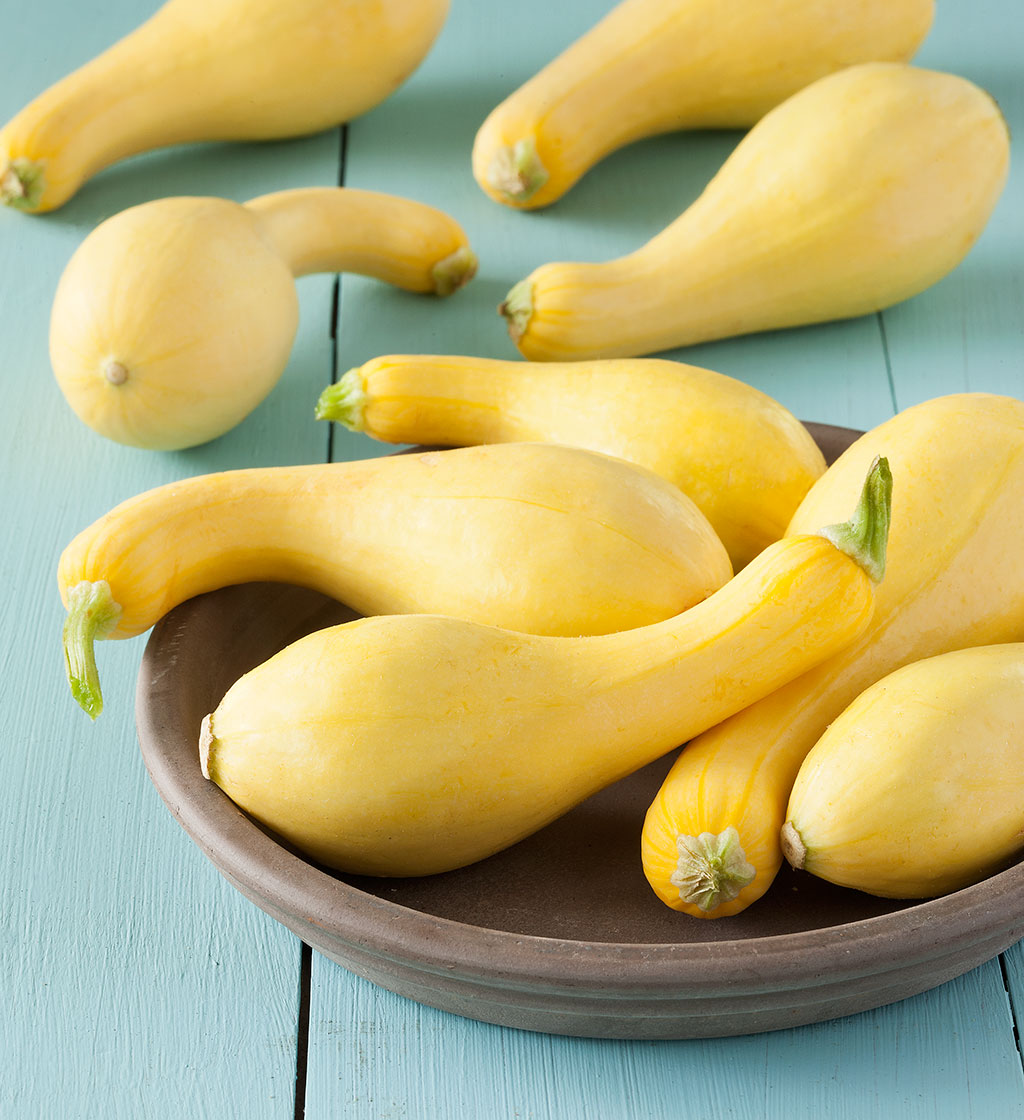 With all the trimming, I can now walk in the garden without getting hit in the head by bushes! Another 90-gallon can was topped off.  I also got under the tomatoes and removed those which had fallen inside the plant. 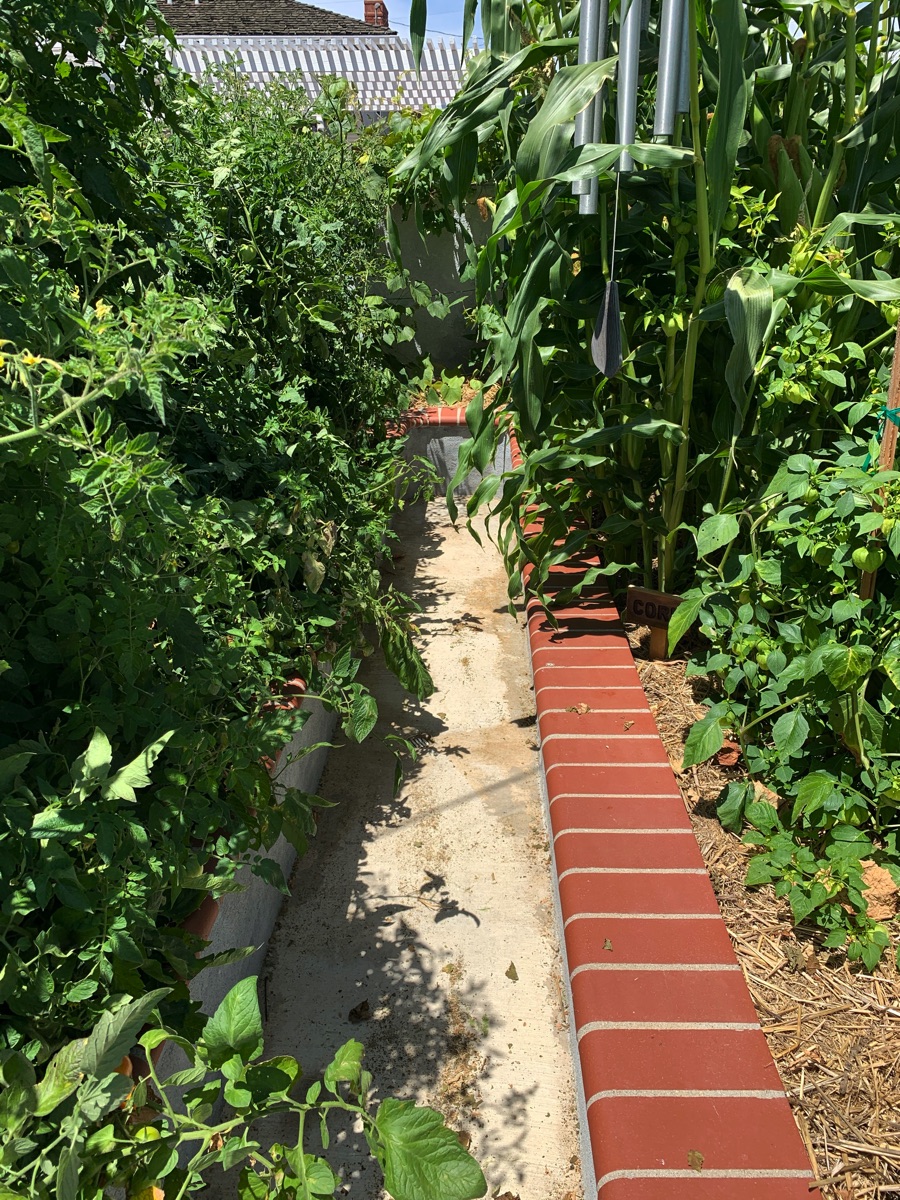 It is so refreshing in the middle of the garden, even on a hot day!

Bob came to the back yard and requested my presence in the bathroom.  So, we thought we had the drain issue solved and then, poof, a right-hand fitting (we thought) turned into a tee, and we had to stop dead in our tracks.  The previous remodelers only connected the shower to the drain via a one and a half-inch pipe!

The shower drain, by code, must be two inches in diameter, but the existing one was only one-half inch too narrow.  Now we are breaking out part of the slab outside the bathroom addition.  Bob wants to make sure we can get to a two-inch drain for the shower.

The half-inch difference means instead of 35 gallons per minute (GPM) it will now pass 55 GPM, pretty significant! 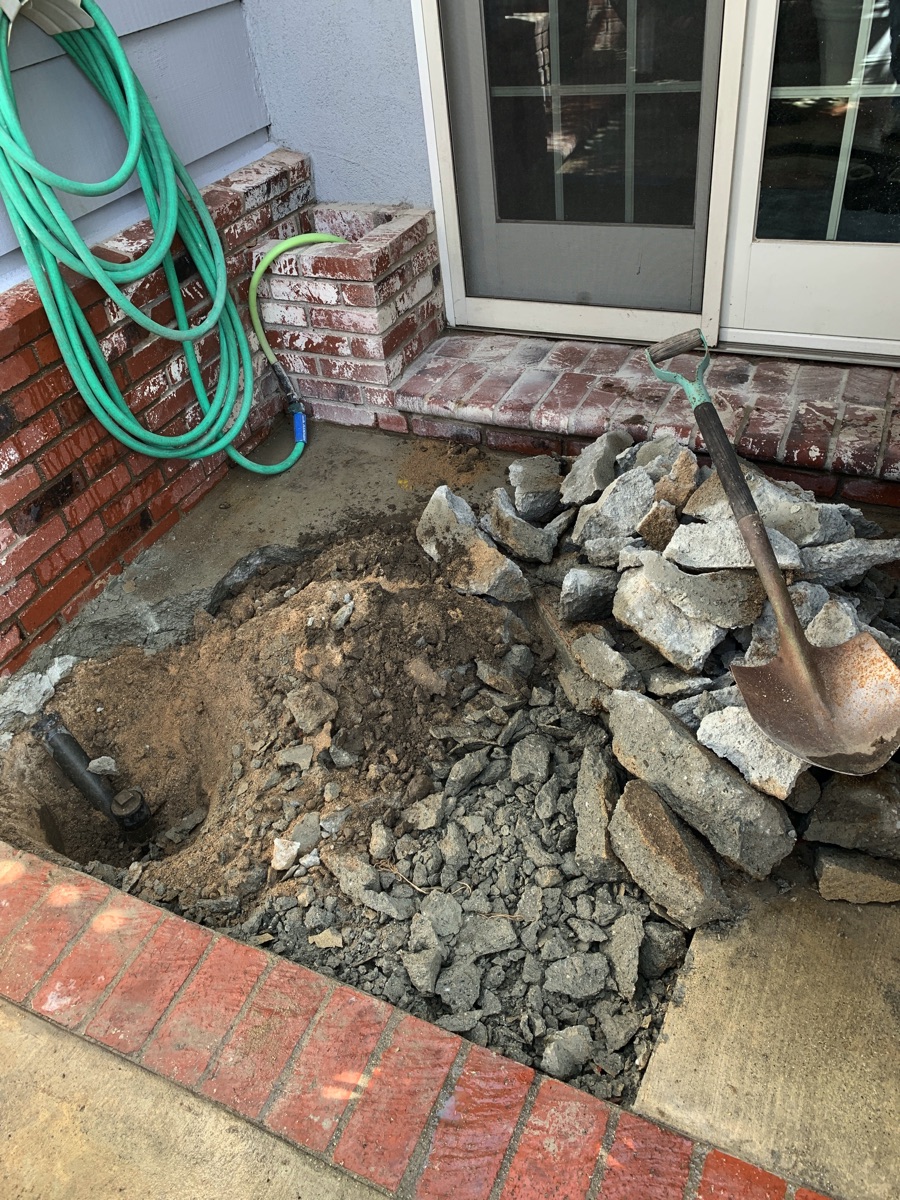 Now we can get to the drain and the foundation so a two-inch pipe will connect to the shower!  I can remember that the shower would “back-up” into the tub sometimes but eventually drain out. The new roll-in shower, we will have zero drain issues! 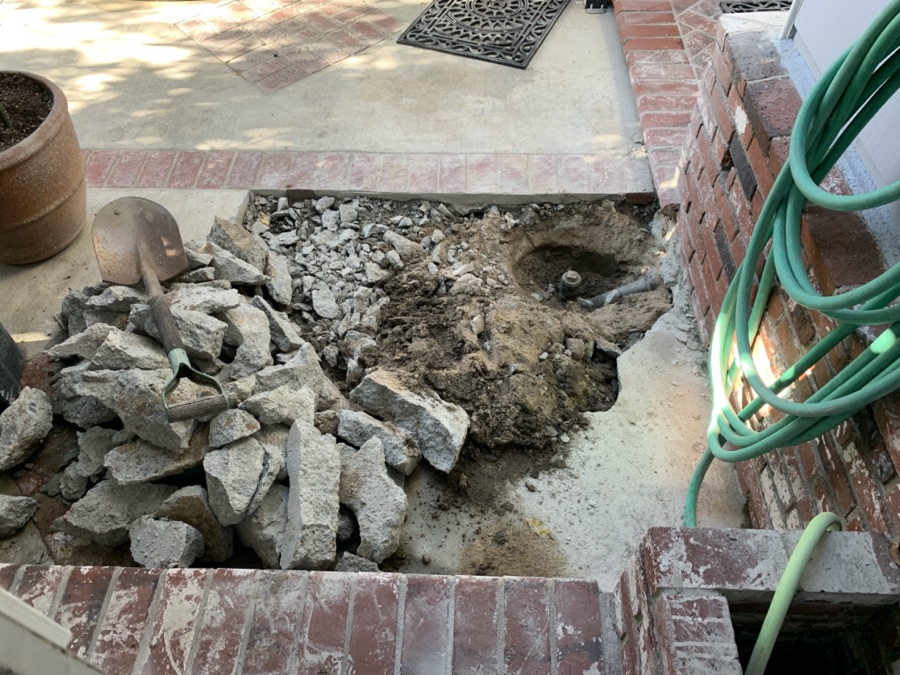 Easy once the concrete is removed! View from the Master Bedroom door.

Joe called, and I told him about the drain problems.  I mentioned I just bought a one-inch Makita rotary hammer for some other minor remodeling I wanted to do.

Did You Know?  A rotary hammer is a power tool that can perform heavy-duty tasks such as drilling and chiseling hard materials.  It is similar to a hammer drill in that it also pounds the drill bit in and out while it is spinning. However, rotary hammers use a piston mechanism instead of a unique clutch. The piston movement causes them to deliver a much more powerful hammer blow, making it possible to drill bigger holes much faster.

Wow, did I get in trouble? Joe reminded me that he has every tool known to man and that he would send over his Bosch Rotary Drill.  I canceled my order with Amazon.  Thank you, Joe, now I can put in the two electrical outlets in the stucco wall.

Joe also sent over a Hobart 135 arc-MIG welder, which I was about to buy.  He said, “store it at your house. When I need it, I will come and get it!” I ordered the manual for the unit and had it printed up at Staples.  I shall practice next week, and then there are several welding projects I have planned, starting with hose storage in the garden. 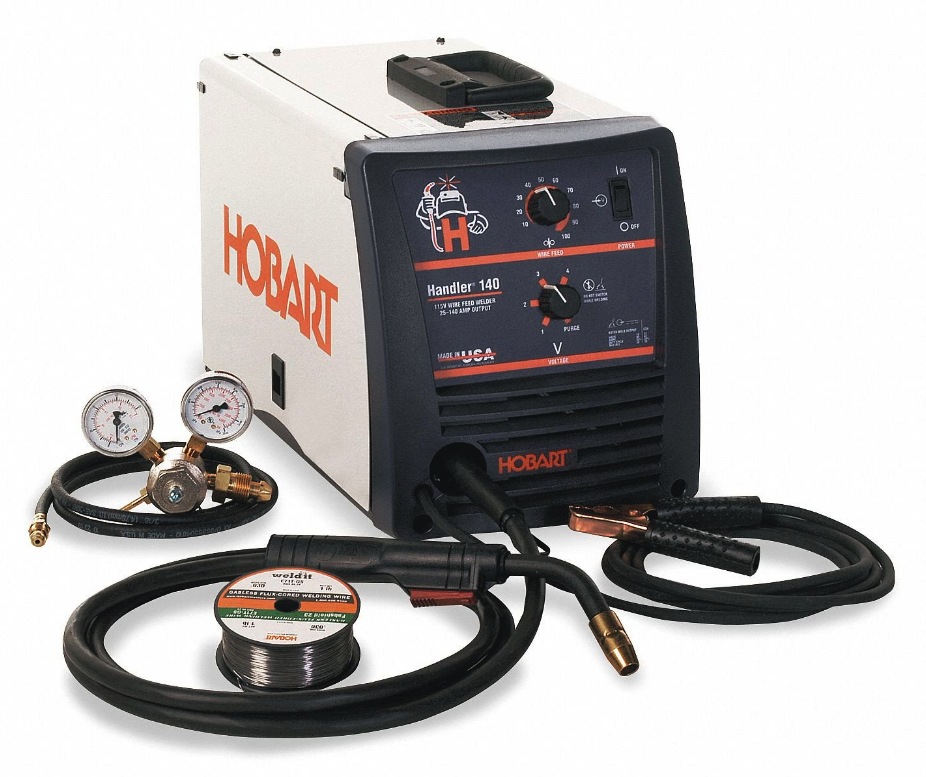 I plan to make several hoser racks for my garden!

Work was wrapped by at 5:00 PM, and I made my way to the shower to get ready for this evening’s interview.  Tonight I go before the Sewer District Board of Directors for a meeting for the opening on the Board.  It might be fun to serve the city as it has been so good to us these past 35 years. 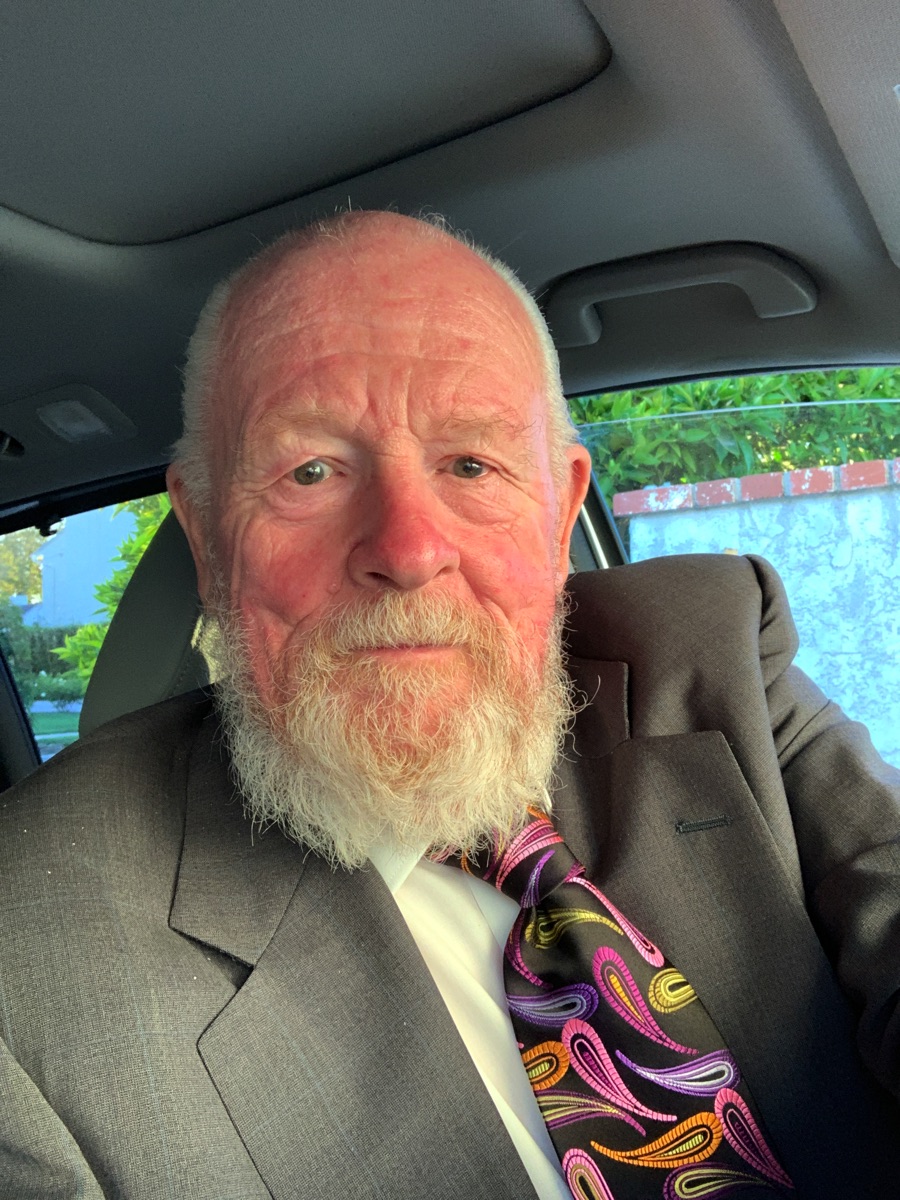 Do I look “Sto-Piss-ti-cated” or what?

The most exciting part of the evening was putting on my suit, which I was about to give away, thinking it would never git me again!  Well, the suit fits with room to spare!

Returning home I made several Bat-Phone calls for the kids would know what I can look like for the last six months, I have been in jeans and sweatshirts!  I also Bat-Phoned Lee so she could see “the real me!”

I watched “The Healer” tonight and had my cup of coffee.  Summary: A handyman who has hit rock bottom agrees to live with his distant uncle, who insists that his ability to fix things extends beyond the repair shop.

As I got sleepy I thought about Sue and remember the last several years I always had “bankies” with me to assure she was warm.  We were out at a restaurant and she was cold so I headed to the car and grabbed the super-soft winter blanket.  Always a beautiful smile and kind appreciative words.  Good night sweetheart! 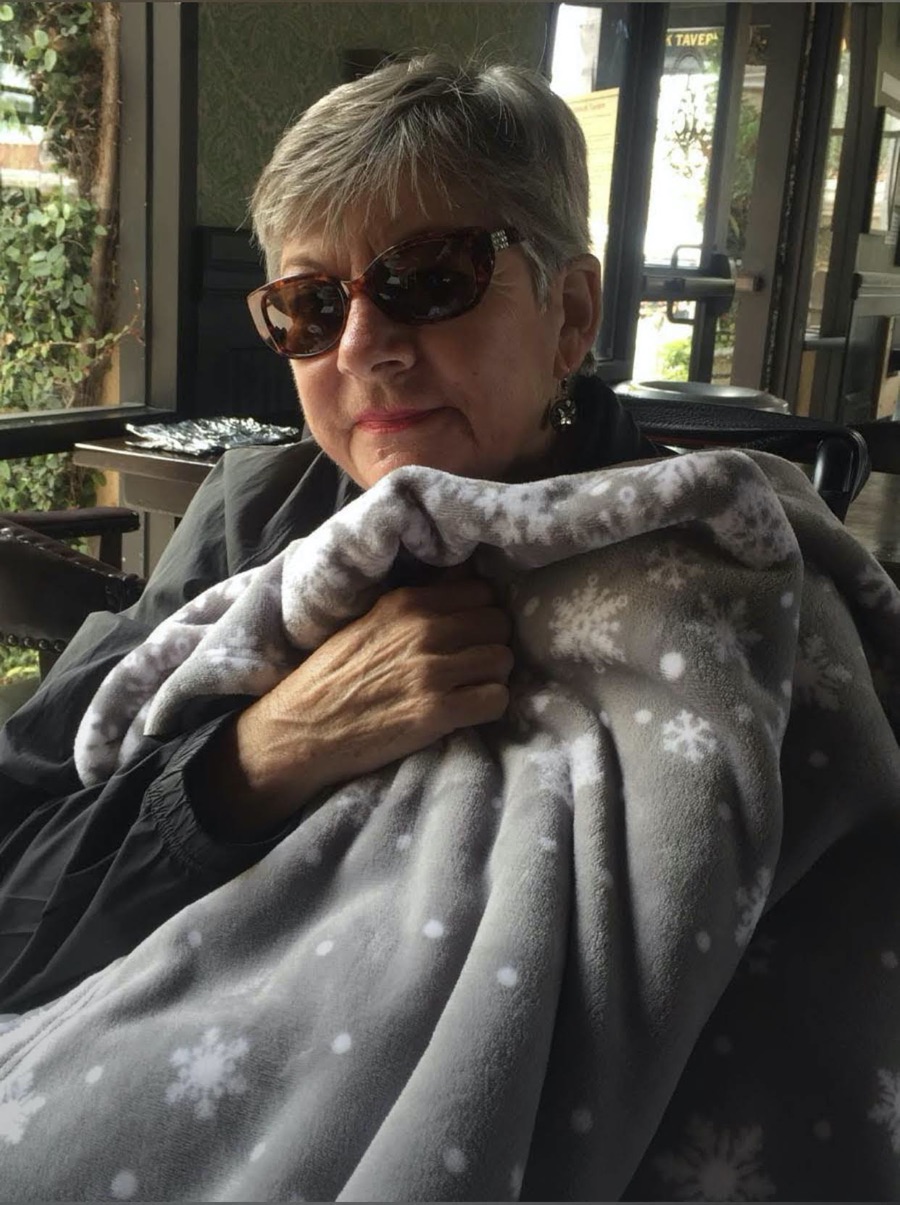 I think about Sue every night when I go to sleep!

It is late, and I have a lot of concrete to move in the morning, so I am heading to the rack.

Just an old retired guy trying to finish out my last years on this planet loving my best friend and wife, having fun, learning, and passing on helpful things to others.
View all posts by Paul →
This entry was posted in Gardening, Working Around House. Bookmark the permalink.
Powered by Maribol IMDB Plugin