We watched “Cover Girl” on the old movie channel.  A chorus girl named Rusty (Hayworth) working at a nightclub run by her boyfriend Danny McGuire (Kelly) is given a chance for stardom by the wealthy magazine editor John Coudair, who years earlier had been in love with her grandmother, Maribelle Hicks. Offered an opportunity to be a highly-paid cover girl, Rusty would faithfully remain with her nightclub act if only Danny would ask her. He doesn’t want to stand in her way, so he picks an argument to send her packing. Rusty becomes a star on Broadway after appearing in a musical produced by Coudair’s wealthy friend, Noel Wheaton, and decides to get married to Wheaton. At the last second she leaves the wedding and reunites with Danny. 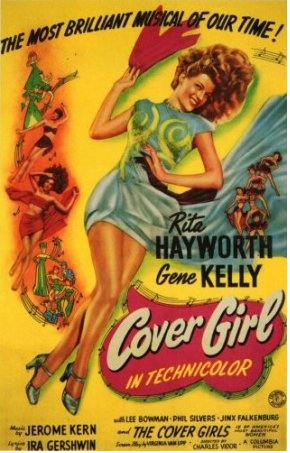 Remember: You know, when I first went into the movies Lionel Barrymore played my grandfather.  Later he played my father and finally he played my husband.  If he had lived I’m sure I would have played his mother.  That’s the way it is in Hollywood.  The men get younger and the women get older.  ~Lillian Gish

Just an old retired guy trying to finish out my last years on this planet loving my best friend and wife, having fun, learning, and passing on helpful things to others.
View all posts by Paul →
This entry was posted in Fun and tagged Movies, Quote. Bookmark the permalink.
Powered by Maribol IMDB Plugin