Did You Hear About: The Chinese kid was born before the due date. Parents named him Sudden Lee.

Well… we were supposed to go to Temecula with The Roberts & Zaitz this morning but after getting up, looking at each other, we called the adventure off.  Diane had pooped us out…well, we were tired.  Diane’s visit was wonderful as we talked, dined. talked, dined, went out, dined, etc, for three days straight!  We called Bob Z. and begged off.

Paul went to the market and got another four miles under his belt and returned to work around the house but it was so humid, we stayed inside and watched TV in the ice air conditioning.

At 4:00 PM we began to get cleaned up as we had to leave early for the Phoenix Club.  We were the designated “cake getters”.  We stopped by Katella Deli and go get the half sheet-cake made of chocolate…eight mega-calories per bite!

We celebrated six birthdays ranging from 68 to 90!  And everyone of them were out dancing the while night through…that says something about dancing! 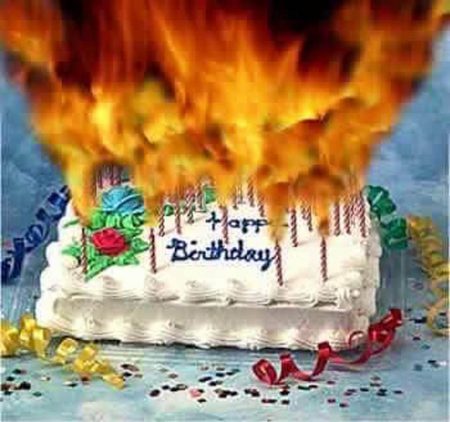 This could have happened if we had put all the candles on the cake!

We stayed until about 9:30 PM before departing.  Great fun and I took about 300 pictures of the event which I will be going through this week!

After the dance we headed home and watched some NCIS before crashing for the evening.  Great fun with friends.

Just an old retired guy trying to finish out my last years on this planet. I lost my best friend and wife in early 2020. I am involved seriously with a long-time friend, Mary, and life goes on.
View all posts by Paul →
This entry was posted in Dancing, Friends, Walking and tagged Birthday, Dancing, Phoenix Club, Walking. Bookmark the permalink.