The Hot Hot Hot Is Disappearing!

Are You Ready For There?

Up and at em’… 6:30 rise and shine.  First things first, what is the weather forecast?

Almost 15 degrees cooler… This is good!

Los Alamitos hit 111 degrees yesterday so a mere 95 degrees will be easy!  Of course, after the 95 degree temperature hits the house all day, the air conditioner will have to run to keep us at 80 degrees inside.  I  checked the electric and it was amazing…the house goes from an average of 19 KWH to 60 KWH when the air is on. More to come on this!

Called Joe at 7:30 AM and he, and his family, were well on his way to their annual vacation adventure at a Christian retreat. Michele and Tony, his in-laws, join them!  This is a good thing as having religion in ones life provides a moral compass, which in today’s times, is really needed.  We wish the family well!  And, we want to see Michele do the zip-line again!

I was in the garden quite a bit and this morning it was time for a walk (and make a list of things to do…there are ALWAYS things to do if you have a garden!).

The figs are looking great! We are going to have a real mess of them soon…seems they all come ripe within a few days of each other!

Did You Know? All dried figs harvested in the U.S. are grown in California’s Central Valley area. Dried Fig production in California has averaged 28 million pounds over the last five years. 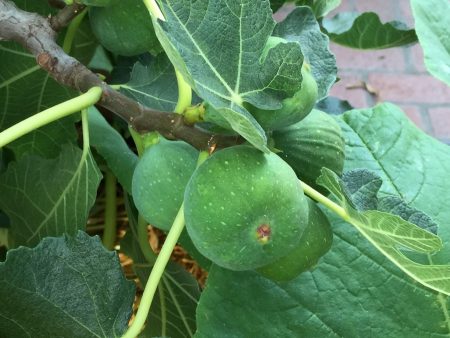 We are about to have a plethora of figs

We can hardly wait (and so can the birds) to get the figs!  The Japanese Beetles also seem to have an affinity for them!

Did You Know? Figs are the sweetest of all fruits, with a 55% sugar content. The flower of the fig is inside the fruit, so there are no blossoms on fig trees. Sort of like an inside out strawberry.

Although considered a fruit, the fig is actually a flower inverted into itself. They are the only fruit to ripen on the tree. Originally native from Turkey to northern India, the fig fruit spread to many of the Mediterranean countries. The primary producers of dried figs today are the United States, Turkey, Greece, and Spain. This highly nutritious fruit arrived in the United States by Spanish missionaries settling in Southern California in 1759. Fig trees were soon planted throughout the state. 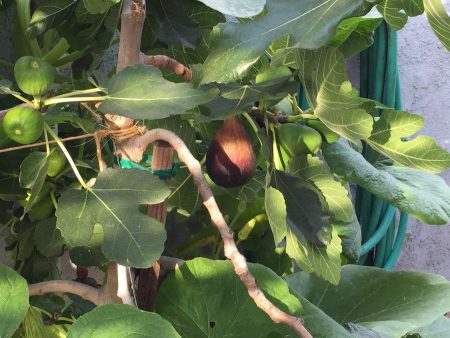 Another day and we get out first fig of the season

The apples are looking great…time to pick today and make apple sauce in the near future. 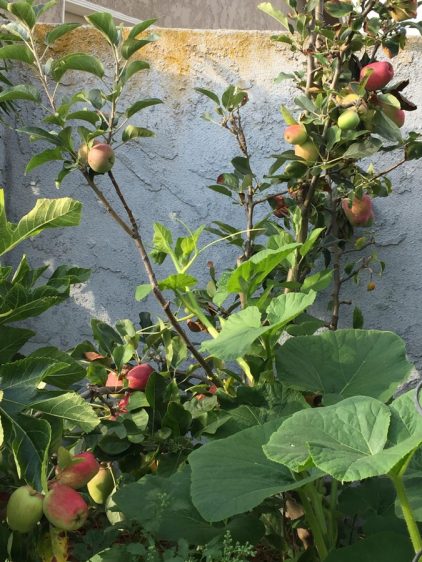 We see apple sauce in our near future

The blueberries are still on the plant and the cage worked super well!  We only had two successful bird entries all season! 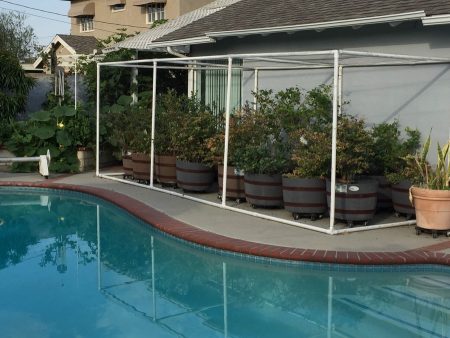 The blue berries are still producing… the birds are pissed!

Did I say tomatoes?  Today, we must made tomato soup!  In our latter years, it’s too much trouble to make tomato sauce! 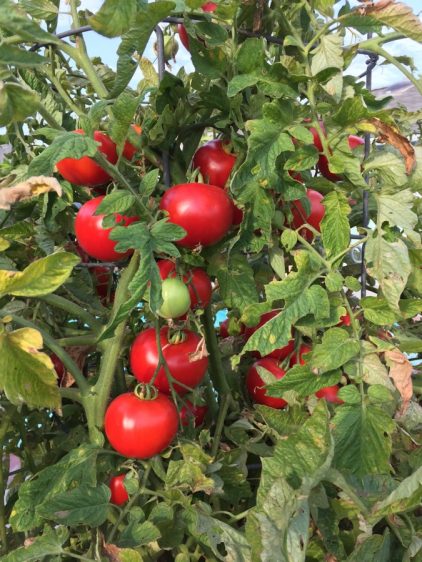 Corn crop #3 is in the ground!  (In the background you can see the grapes which we planed earlier this year…we are already getting concord grapes from them).  We mix white and yellow corn together so we get yellow corn, white corn, and a mix of the two!

In 70 days we will have fresh corn for dessert with every meal!  We are doing our “green thing” because one acre of corn removes about 8 tons of carbon dioxide from the air during the growing season. We did not do an acre but every little bit helps! 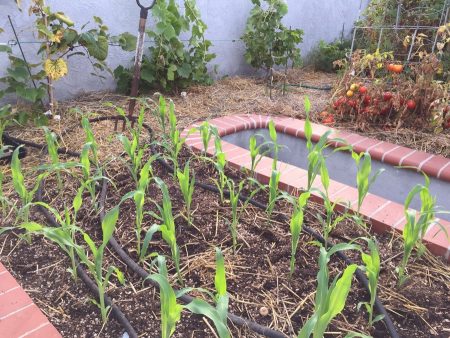 Sorry about the angle  but I held the iPhone over the bed so a birds-eye view. The root system of healthy corn can grow 5-1/2 feet into the ground. 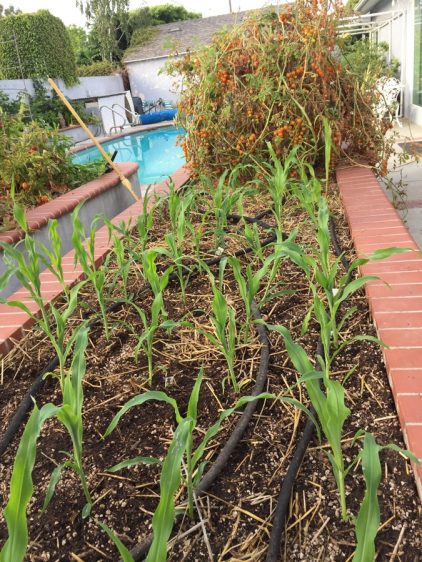 In 70 days we will need tooth picks!

Walking in the garden relaxes me and I doesn’t make me think about the weird liberals causing all the problems in our country!  If I hear one more lib whining about the criminals crossing our border and separating kids I will puke!  Why don’t they understand these people are criminals entering our country illegally…why not the outrage when 50% of our kids “graduate” high school and can’t read nor write…enough, I can’t fix stupid!

Got a call from Colleen, her and Jon are coming over in a few minutes.  They had breakfast with Zachary and Becca over in  La Habra early this morning.

Jon is flying back to New Hampshire today as he has work which has to be done so we decided to drive him to LAX.  Colleen, Jon, Sue and I made the trek…now I know why we do not fly!

The the way home, we took Colleen to Katella Deli at 1:30 PM where we had lunch.  Later in the afternoon Zach called and wanted to invite us to dinner…when he said “Himalayan Grill” we said yes!  At 6:00 PM we had another meal…most of what we ordered cam home with us!

Colleen headed for her hotel and we began watching season two of NCIS… Bringing back memories, some fuzzy and some actually quite bright…see, at our age we do remember some stuff!

We crashed about 11:00 PM this evening, both of us tired…could have been the heat!

Just an old retired guy trying to finish out my last years on this planet loving my best friend and wife, having fun, learning, and passing on helpful things to others.
View all posts by Paul →
This entry was posted in Family, Food and Wine, Gardening, Just Us, Walking and tagged Dining Out, Family, Just Us, Vegetable Gardening. Bookmark the permalink.
Powered by Maribol IMDB Plugin