Today Be The Turd Of May

May is out in full force. Hey… Only 237 days until Christmas!  Having Siri on the laptop is often quite convenient! 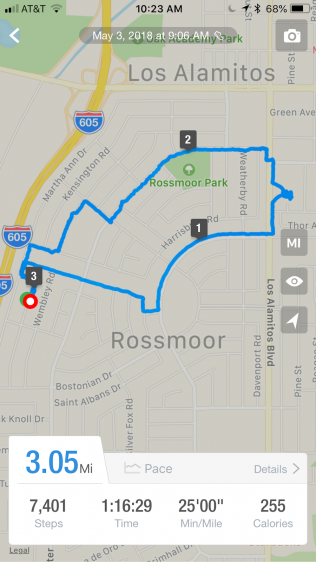 Today Paul had a target… milk at the market, hence the little pip on the map indicating a quick stop at the local Von’s Market!  Psul takes the iPhone with him and listens tothe radio but the continual and ridiculous attacks on Trump is getting old.  Russian colusion and Story Daniels is to the point of being sickening so, Paul switched to iHeart radio and the Doo-Wop channel.  When the dumocrats stop their silly non-sense about Trump, Paul will go back to Ruch and Hannity…until then, Doo-Wop forever! 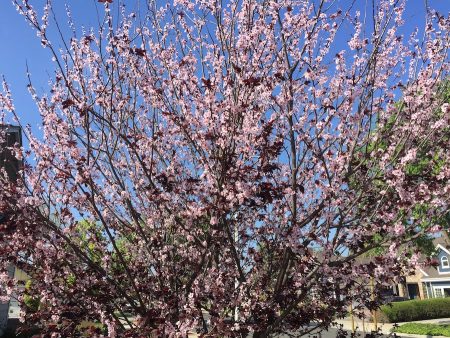 The flowering trees were magnificent this fine morning.  They stand out against the blue sky. In another week, we will have a blanket of pink on the ground and new green leaves ready to grow large and several of the trees will be fruiting like mad!

The whitish rose stuck out like a sore thumb!  There was a yellow ting on the leaves. 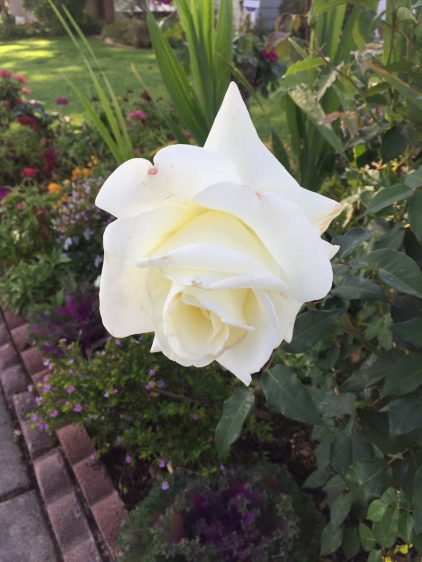 We worked around the house in the afternoon.  Sue’s back and headache was to the point of debilitating so we decided to stay home…no Phoenix Club this evening…and that is rare, indeed!

The shop is looking pretty good these days… Paul can get to all the tools quite easily and it seems well organized.  The last job was to convert the fluorescent shop lights to LED taking the lights from 160 watts per fixture to less than 30 watts per fixture.

It was a proud moment when Paul senior began to show Paul how to use the tools…Paul remembers “choke down on the hammer, use a nail set on the finishing nails, don’t saw through the electric cored, etc etc.”

Dad was by some peoples definition “uneducated” having only made it through the 6th grade in Arkansas but that man was FAR from uneducated.  He could build anything.  Together over the years, we built a LARGE patio, a huge outdoor fireplace and bar-b-que out of bricks, probably 200 feet of cinderblock wall, an entire 20 x 30 foot summer room, a 20×20 carport, re-plumed a four-unit apartment house (which we bought for an investment), a pool equipment blind, and a lot more!

The skills Paul Senior taught Paul are used to this day and it is great to see that Paul passed those skills to his son, Joe who also is a handyman.  A visit to joe’s home revealed his amazing skills as evidenced by his beautiful home and penchant for collecting tools and having a workshop!

So the evening came and we bing-watched “Royal Pain” which we find interesting and funny.  We never heard of that show before but they had an eight season run with 104 episode so are are one season into the series already!

Just an old retired guy trying to finish out my last years on this planet. I lost my best friend and wife in early 2020. I am involved seriously with a long-time friend, Mary, and life goes on.
View all posts by Paul →
This entry was posted in Gardening, Just Us, Walking and tagged Chores, Random Memory, Walking. Bookmark the permalink.