Up at at ’em for we have a medical journey to undertake today.  But alas, the backyard is dark and the clouds appear to be ready to drop their contents on the unsuspecting.

Indeed, believe the Internet.  Paul got a message at 7:11 AM stating it was raining and after looking outside, the backyard concrete began to show signs of moisture exactly on schedule!

Quick, to the camera and pointing out the kitchen window the moisture is captures as the sun rises in the east!  The tomatoes cages caught the rain and formed droplets which shimmered in the sun!  It was magical! 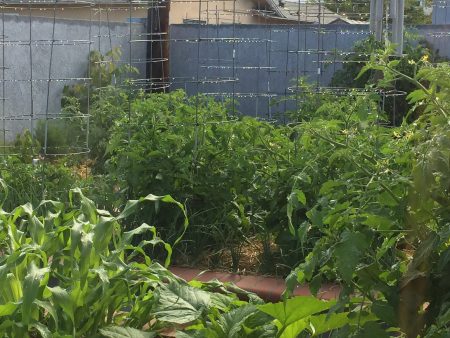 Time to get ready to go as we are off for a bone scan which required two visits, one for the shot of nuclear meds that light up the bones and one visit two hours later for the actual scan.  The first appointment was at 11;00 AM in Signal Hill.  BElow is a picture of what they are looking for.

Did You Know? A bone scan is a nuclear imaging procedure. In nuclear imaging, tiny amounts of radioactive materials (tracers) are injected into a vein and taken up in varying amounts at different sites in the body.

Areas of the body where cells and tissues are repairing themselves most actively take up the largest amounts of tracer. Nuclear images highlight these areas, suggesting the presence of abnormalities associated with disease or injury.

The sacroiliac joint connects the sacrum (triangular bone at the bottom of the spine) with the pelvis (iliac bone that is part of the hip joint) on each side of the lower spine. It transmits all the forces of the upper body to the pelvis and legs. There is not a lot of motion in the joint and it is very strong and stable.

In between the two appointments, we went to lunch at the Panda Inn over by La Mirada.  Panda Inn is our favorite Chinese place to dine and they know us quite well (as we take over the entire bar every Christmas Day and celebrate Christmas by watching “The Christmas Story: with family and friends.

Lunch was over so we stopped by home for a few minutes so Paul could position the plants from yesterdays visit to H&H Nursery in the garden.

Time is now and off we go in a cloud of dust and a hearty “Don’t start without us!”. 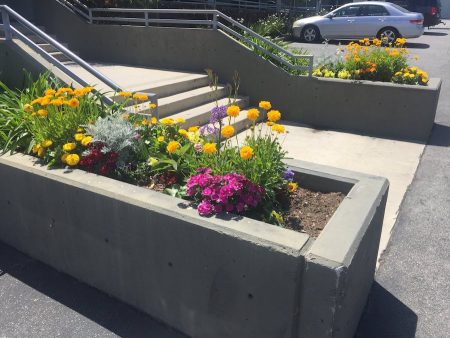 The PET Scan facility was quite nice 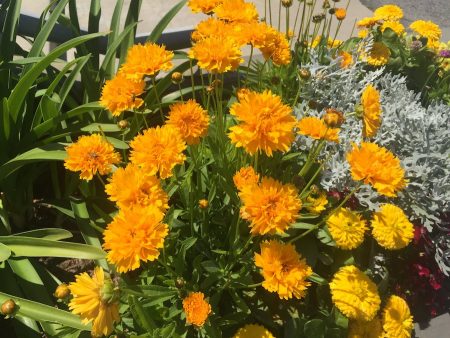 A closer look revealed an amazing shade of gold on the flowers – just like the bill from inside?

Paul was waiting for one last piece of PVC to finish off the Blueberry cage. The fitting arrived while were were at PET Imaging! (No, not “pet”)  How did we know…the phone beeped and a notification appeared telling us it was a few minutes away! 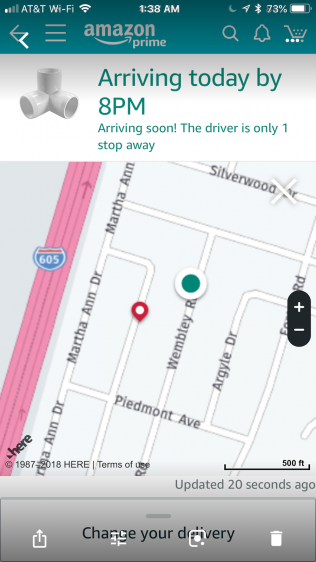 White sitting waiting for Sue, Paul gets a notification that the latest delivery is one stop from our home – Amazing!!

The scan takes about 90 minutes as the doctor wanted several different views of the area.  We got out of the office at 3:45 PM and headed home.

When we returned home, Paul planted the little plants right where they were standing…makes life easier and that is good!  Today he tried something new…he found the little red wagon and pulled it around with the fertilizer, tools, radio, and trash bag inside.  Again, trying to make things easier!

Paul hit the garden and worked for a couple of hours planting  bush beans,  bright-lights Swiss chard, Lima beans, red beans, cucumbers, another pumpkin, and a few bell peppers.  He also caged the berries as they were kinda getting wild!

By 6:00 PM, it was time to come in and get cleaned up as we are off to dancing at the Phoenix Club.  Tonight Connor and his lady,Kerick,  joined us. It was nice to see him and Kerick again as it has been too long.  We jabbered until about 9:00 PM and they had to depart as Kerick has a 6:00 AM appointment with work!  Connor has a job interview in the late morning.

Upon arriving back home we watched two episodes of “Lost In Space 2018” before crashing and of sources, Paul fixed four beautiful chocolate chip tookies!

What the hell?  It is 1:30 AM and we heard a weird noise in the garage… Paul put on some clothes and headed to the garage with a large flashlight and sure enough, we had an opossum visiting us? How this little devil got in the garage we do not know but after terrorizing him with a flashing signal from the 2000 lumen  flashlight, we departed from greener (or darker) pastures.  Tomorrow, we will have to investigate further as the doors were closed and wire vents were all in place…could he have come in during the last afternoon when Paul was in the garden?  Weird! 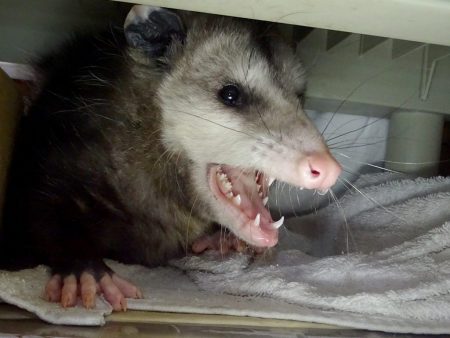 Pet Opossum? I think not!

Finally to bed…this time without noises!

Just an old retired guy trying to finish out my last years on this planet. I lost my best friend and wife in early 2020. I am involved seriously with a long-time friend, Mary, and life goes on.
View all posts by Paul →
This entry was posted in Dancing, Family, Food and Wine, Gardening, Just Us and tagged Dining Out, Doctor, Family, Friends, Phoenix Club, Vegetable Gardening. Bookmark the permalink.