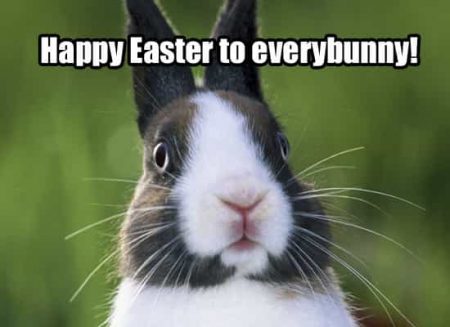 … This little guy has the spirit!

So today we went off our norm… We stayed home and did NOT go to Disneyland.  Robin was tied up with Bob’s family and family issues with her sister so we decided to “sit this one out”.   So after a small breakfast, Paul headed out the door for a walk and this time he had a target… the CVS pharmacy to get some band-aids.  Paul has a pre-cancer removed form the right arm and the narrow band-aids at home would not cover the wound from the biopsy!  That’s why the little squiggle at the top-left hand corner adding about 20 minutes to the walk. 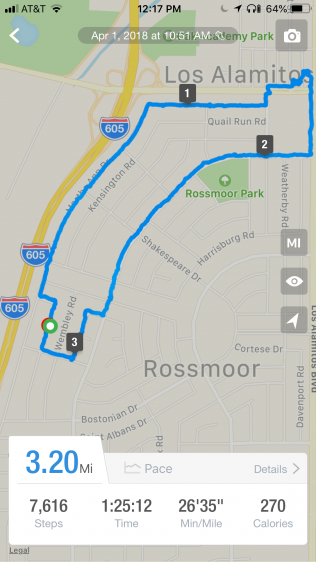 Below is a picture from seventeen years ago celebrating Easter at our house. 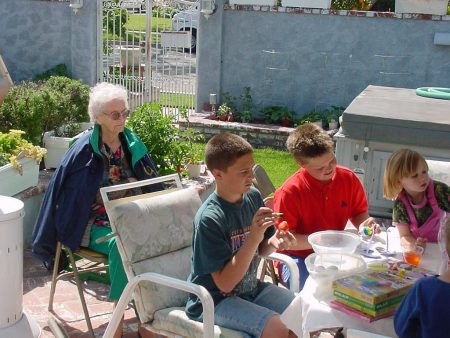 The lady is blue is Aunt Edith, she passed away several years ago in her 90’s.  Jon, in turquoise,  is now 29 and lives with his wife in New Hampshire.  The  little guy in red is Zachary who is not 27 and made our first Great Granddaughter, Lily, with his beautifu bride Rebecca.  (Zack and Rebecca keep the tradition going as they joined us this year!  Jacquie is a tyke and now lives in New Hampshire and is flirting with getting married.  Time flys and so do ducks!

After getting home, we watched a movie and them TV for a couple of hours.  Then to the back yard for a quick check of the garden.  We almost decided to go out but who wants to fight the Easter dinner traffic… we had leftover Nepalese/Indian food instead and it was good!

Today was also a day of remembrance as it was Sue’s father’s birthday.  He was 46 when he passed in 1977. 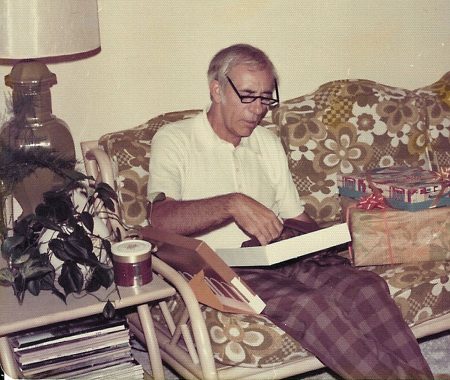 Paul did not have the honor of knowing him but from everything he heard, he was quite a man!

Psul’s father passed in 1970 so we have been with our dads for many years.

Just an old retired guy trying to finish out my last years on this planet loving my best friend and wife, having fun, learning, and passing on helpful things to others.
View all posts by Paul →
This entry was posted in Food and Wine, Holidays, Just Us and tagged Celebration, Just Us, Walking. Bookmark the permalink.
Powered by Maribol IMDB Plugin