Paul worked around the house for about five hours doing little clean-ups, fixing things, washing the Avalon, etc.  The “to do list” is now back under control!  We worked on the Topper’s Newsletter so we can mail it out Monday.

We were getting a little bit of cabin fever so we decided to head to Newport Center and visit Cucina Enoteca, one of our favorite dining locations.  Tucky was behind the bar and he fixed Paul a special drink.  Tucky is a professional mixologist and is well known in the bartending arena.

He came out with a hunk of ice from the kitchen and it was without air bubbles.  He put down a wooden board and went to work on the ice making sure it would fit in the Manhattan glass. 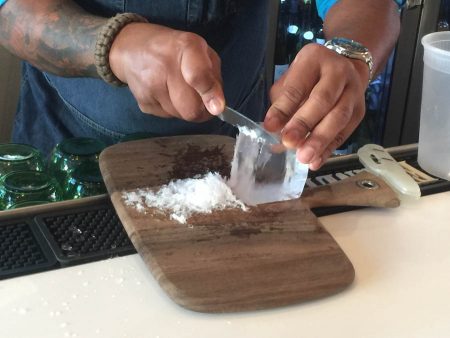 Tucky knows Paul likes special drinks but also likes to order two different drinks  so  he adjusts the content so there is smaller amounts of alcohol as we want to drive safely.  We pay for his performance and don’t mind a smaller drink! 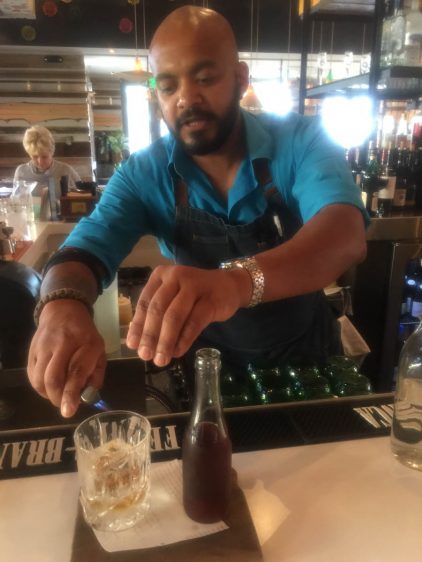 He rubbed the rim of the glass with orange citrus oil and he set it on fire. (Note the lighter in his hand)

The drink was a form of a Manhattan with Tucky twists.   The drink was aromatic and with the large ice cube, it took Paul 40 minutes to finish it!. Rule #1 – You can’t get another drink until the first glass is empty!

We ordered a couple of appetizers before heading north to the Fullerton Elks for a dinner dance with the gang!

At the Elks, the bar/dining area was fairly full and Gene Duval was already set up and going. 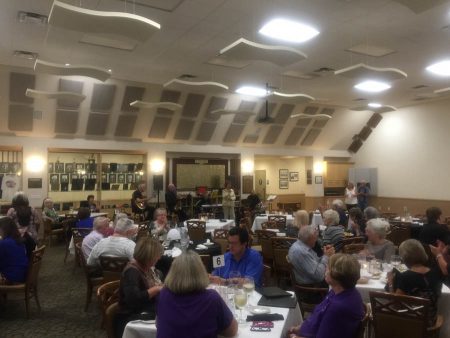 Our contingent made up about half of the attendees

Our gang had a long table but the only chairs available to us were against the wall requiring a lot of squirming to get in and out.  We opted for a table for six where Marianne and Craig plus Donna and Bob Z joined us.

The meals were great and inexpensive!  After the appetizers, Paul had a bowl of soup and shared some french fries with Sue 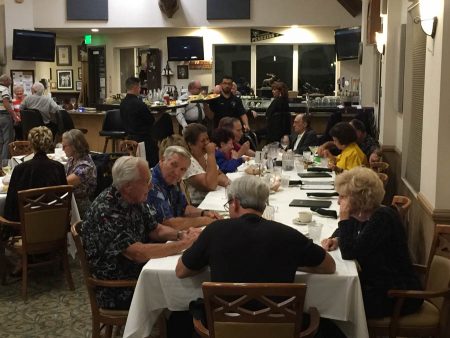 We sat with two other couples at a separate table

The sound treatment made the room significantly quieter than most Elks venues.  The band played loud but the sound that would have bounced against the ceiling and walls was attenuated by the sound panels. 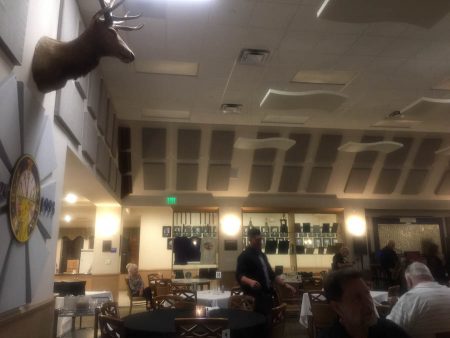 The sound management techniques were outstanding in the room

We visited the purple pig on the way home.  Elks drop their loose change into the purple pig and it is used for children’s charities and medical advancements.  If every Elk dropped a dine a day into the pig, we would have $3.5 million a year.  We feed the pig on a regular basis. 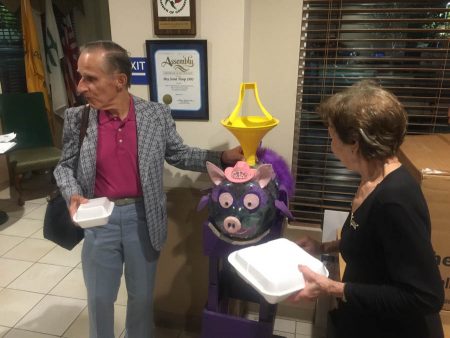 Leon pets the “Purple Pig” and gives him loose change

OK, it is now 10:30 and time to head for home!  Captain Janeway may be on her own tonight!

Just an old retired guy trying to finish out my last years on this planet. I lost my best friend and wife in early 2020. I was blessed again by reconnecting with Dr. Mary Côté, a long-time friend. Mary and I got married July 28th, 2021, and are enjoying life together and plan to spend the rest of our lives being a blessing to our friends and family.
View all posts by Paul →
This entry was posted in Dancing, Food and Wine, Friends, Fun and tagged Dining Out, Elks Lodge. Bookmark the permalink.