We spent the day in the car going to Saratoga to visit with the Porters!  We spend the evening with them and went to the Elephant Bar for dinner.  Tomorrow we are going to celebrate a birthday with Tom and Aunt Kaye! 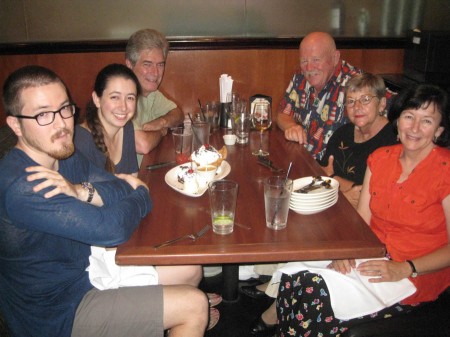 We dined at the Elephant Bar… Time to laugh and giggle!

Did You Know – Saratoga  is a city in Santa Clara County, California, USA. It is located on the west side of the Santa Clara Valley, directly west of San Jose, in the San Francisco Bay Area. The population was 29,926 at the 2010 census.

Located on the Western edge of the Silicon Valley, Saratoga is known locally for its suburban small-town feel, wineries, and high-end boutiques. In 2008 CNN/Money ranked Saratoga number 4 in its listing of top-earning towns.[6] Saratoga also was ranked by Forbes in 2009 as one of America’s top 20 most-educated small towns.

Just an old retired guy trying to finish out my last years on this planet. I lost my best friend and wife in early 2020. I was blessed again by reconnecting with Dr. Mary Côté, a long-time friend. Mary and I got married July 28th, 2021, and are enjoying life together and plan to spend the rest of our lives being a blessing to our friends and family.
View all posts by Paul →
This entry was posted in Family, Food and Wine and tagged Adventure, Dining Out, Family. Bookmark the permalink.