Death Of A Salesman

We took it east today and played hookey from church.  We went to Seasons 52 for a great lunch before going to South Coast Reperatory Theather to see “Death Of A Salesman” which was outstanding. Summary: Arthur Miller had his first Broadway triumph with this history-making play. Numerous versions followed—on stage, film and television—including SCR’s first gripping production more than 45 years ago. Now an exciting revival will hold audiences in rapt attention, as Willy Loman tries to instill in his sons the values he has lived by, clinging tenaciously to his version of the American Dream, even as his family watches it slip away. Stage, screen and television star Charlie Robinson leads a dynamically diverse cast as Willy Loman. No stranger to characters who struggle with a changing world, Robinson won raves from SCR audiences and critics alike for his portrayal of Troy in Fences and Becker in Jitney. 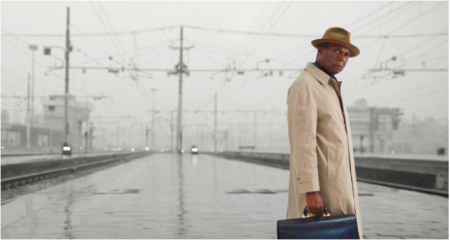 After the play we went to Old Ranch for Happy Hour with Bunnaford!

Just an old retired guy trying to finish out my last years on this planet loving my best friend and wife, having fun, learning, and passing on helpful things to others.
View all posts by Paul →
This entry was posted in Food and Wine, Theater and tagged Friends, South Coast Rep, Theater. Bookmark the permalink.
Powered by Maribol IMDB Plugin