It might help to get the full, Technicolor picture but you don’t have to be of a certain vintage to enjoy the act of Little Anthony and the Imperials as seen on Saturday evening at the Cerritos Center for the Performing Arts.

The Rock and Roll Hall of Fame group has inscribed their names and music on the collective memory of American Pop reaching as far back as 1957 when I was at St. Helen School being whipped into shape by Sister Leocritia.

At Cerritos they put on a show full of energy, humor and style that got the packed house upright in their seats and gave full measure to the meaning of all those gold records they recorded over the past half century. Yep, half century. They opened with the dramatic but jocular “All by Myself” that began with the sad looking Anthony belting out the melancholic lyrics but later being joined by the smooth and sensational Imperials who swelled the chorus into a full blown melodrama. 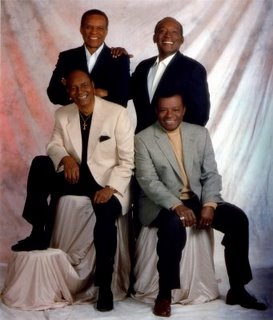 Little Anthony and the Imperials

Still, the night pretty much belonged to the truly ageless Little Anthony and those original Imperials. Many rock and roll revival shows can only put one member on stage but the Imperials are the real deal with Clarence Collins, Ernest Wright and Harold Jenkins working alongside Anthony Gordine dancing, singing and wowing the Cerritos faithful at this show. The entire ensemble gathered for a grand finale of the chestnut “Goodnight Sweetheart” that hasn’t sounded so good since it came out of the vibrasonic in the Chevy Bel Air back in the day.

Just an old retired guy trying to finish out my last years on this planet. I lost my best friend and wife in early 2020. I was blessed again by reconnecting with Dr. Mary Côté, a long-time friend. Mary and I got married July 28th, 2021, and are enjoying life together and plan to spend the rest of our lives being a blessing to our friends and family.
View all posts by Paul →
This entry was posted in Fun and tagged CCPA. Bookmark the permalink.