This massive legitimate theater is to Orange County what the Shubert Theater or the Music Center is to Los Angeles: the home to major Broadway musicals such at “Phantom of the Opera,” “Cats,” “Showboat” and “Les Miserables,” as well as concerts, ballet, the symphony, and grand opera. Broadway musicals tend to come to this theatre after they have already played Los Angeles. “Chicago,” for instance, came to the Performing Arts Center immediately following its run at the Ahmanson. But that can be a good thing – it gives theater-goers who missed the initial L.A. run a second chance to catch the show. 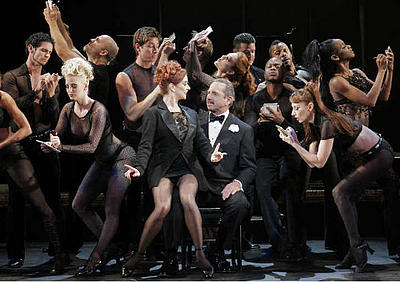 A Wild Afternoon Was Had By All (p.s. That’s Paul in the second row)

Just an old retired guy trying to finish out my last years on this planet loving my best friend and wife, having fun, learning, and passing on helpful things to others.
View all posts by Paul →
This entry was posted in Food and Wine, Fun, Theater and tagged OCPAC. Bookmark the permalink.
Powered by Maribol IMDB Plugin