New Members Of The “Girls Night Out” Gang

Fact: McDonald’s introduced drive-through service due to the military.  The first McDonald’s Drive-Thru was installed in a restaurant based in Sierra Vista, Arizona, near the Fort Huachuca military installation.  Military rules forbade the soldiers from wearing their military uniforms in public.  They weren’t about to change into civilian clothes to grab a burger and run back to base, so restaurant manager David Rich came up with a solution: cut a hole into the wall and allow members of the military to pick up their orders without stepping out of their car.  The convenience and simplicity of the idea.

We listened to the weather report this morning, and instead of giving us the temperature,  the weatherman warned us that “it is going to be so hot the chickens will eat hard-boiled eggs.”

We took a walk in the backyard to make sure all the plants in plenty of water in them as I turned on the sprinkler system to run the complete cycle, even though it was not a typical day for watering. 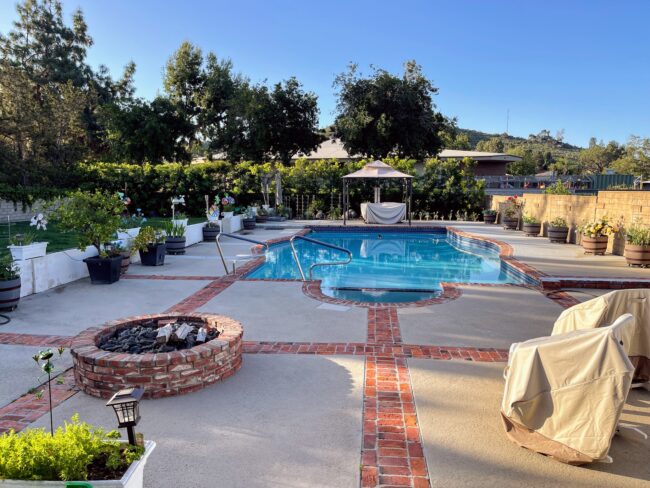 Everything was ready for the temperature onslaught!

Scout was getting his exercise early as he knew that his fur coats would make him sizzle by this afternoon! 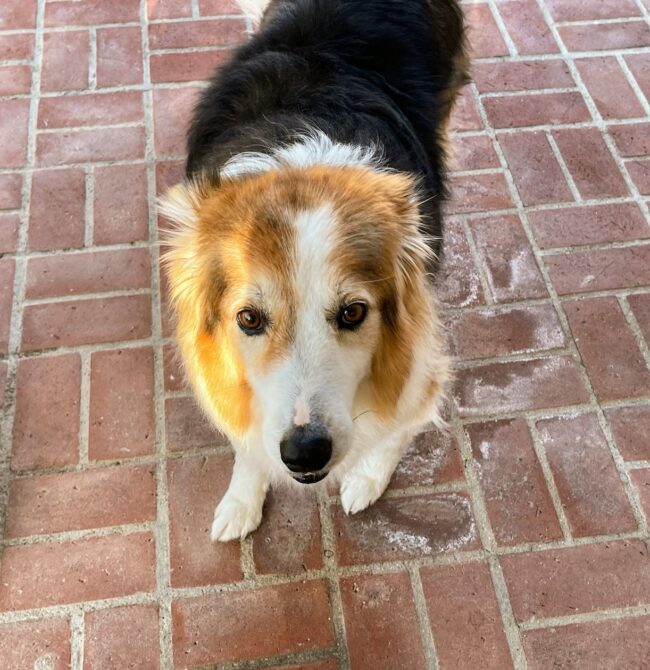 Scout did stop and talk to me about breakfast!  Now I have to go to school to cook doggie food?  I told Scout, age is a high price to pay for maturity.

About six months ago, we installed a Hunter Wi-Fi-enabled sprinkler controller in the front and back yards.  Now we can walk the property with the trusty iPhone in hand and water specific areas as we see fit.  The system talks to the internet and will not water on days when it has rained already (or going to rain). 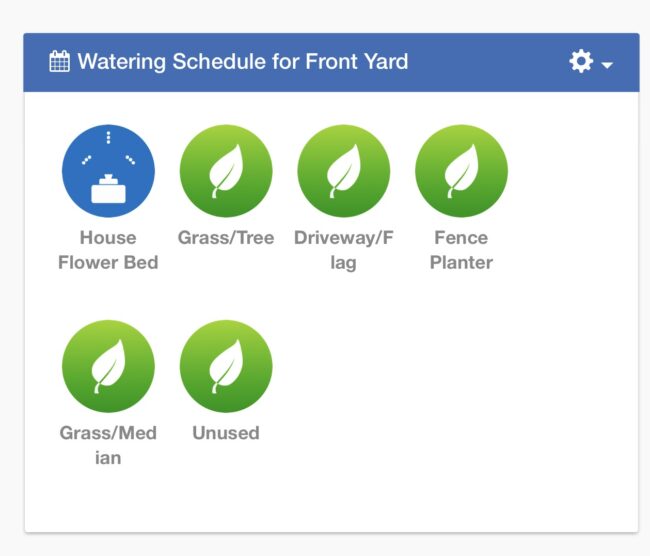 With the touch of a finger, the yard gets a bath!

We did some chores around the house, with Mary concentrating on the office and I still working in the garage.   Now we have our emergency supplies in the She-Shed and He-Shed; between us, we have enough emergency rations for a month!  We have two emergency kits, and the big generator is at the ready!

At 11:00 AM, we headed south to the Santa Ana Elks for Girls Night Out.  It is so hot… today I saw a funeral procession pull into a Dairy Queen.  We were stopped by two funeral processions and thought we would never get onto the main street!

Today we are having guests; Irene and Vicky!  It was, of course, hat day, and I wore my Fedora while Mary donned an Anita Page hat which she got at a silent auction many years ago.

Did You Know?  Anita Page (born Anita Evelyn Pomares; August 4, 1910 – September 6, 2008) was an American film actress who reached stardom in the final years of the silent film era.  She was referred to as “a blond, blue-eyed Latin”  and “the girl with the most beautiful face in Hollywood” in the 1920s.  She retired from acting in 1936 but came back to it by 1961 when she retired again.  Page returned to acting thirty-five years later in 1996 and appeared in four films in the 2000s. 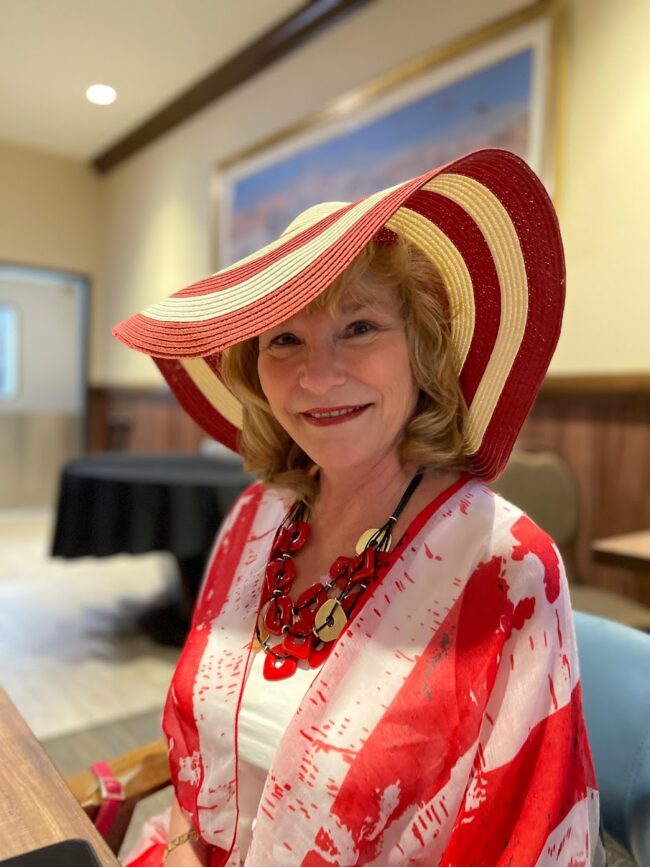 Mary does have a way of making hats look amazing!

We were happy that the girls joined us; Vicky went to the steak special, and apparently, it was pretty good! 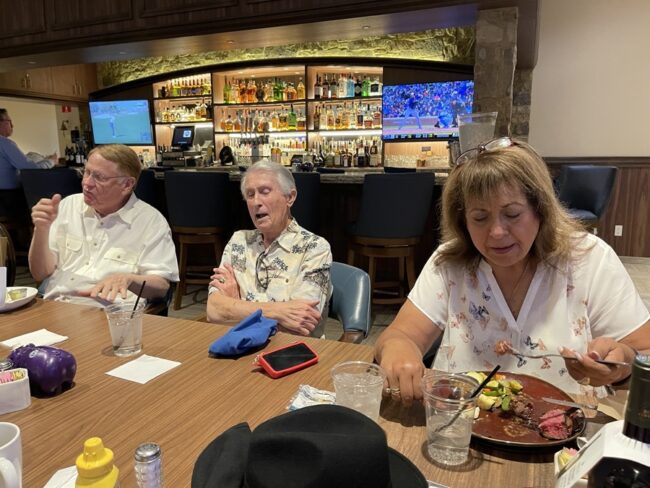 Vicky joined us for Girls Night Out!

In the 1920s and 1930s, hats were a big thing.  While dining, I looked through Anita Page’s images on the internet and came across “the hat.” On the left was Anita Page in her heyday in the late 1920s.  The right, well, that goes without saying! 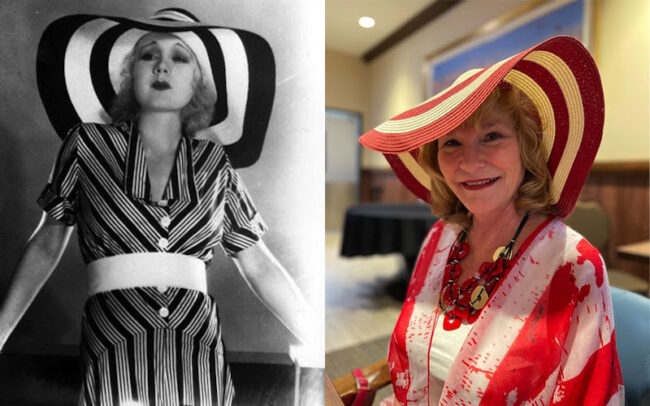 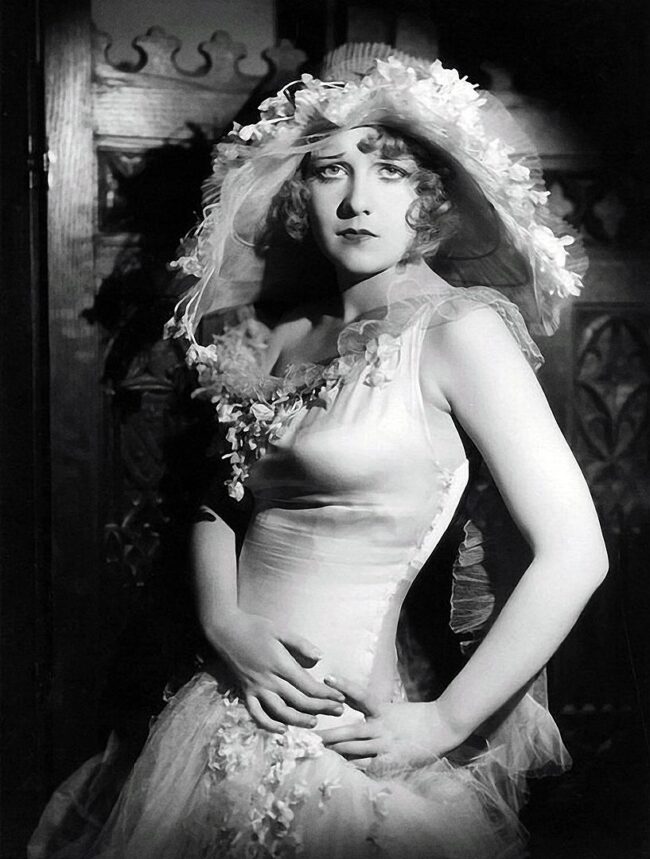 After lunch, we departed in the heat for home!  By the time we got on the freeway, the gauge indicated 97 degrees.  It was so hot… the trees were whistling for the dogs. 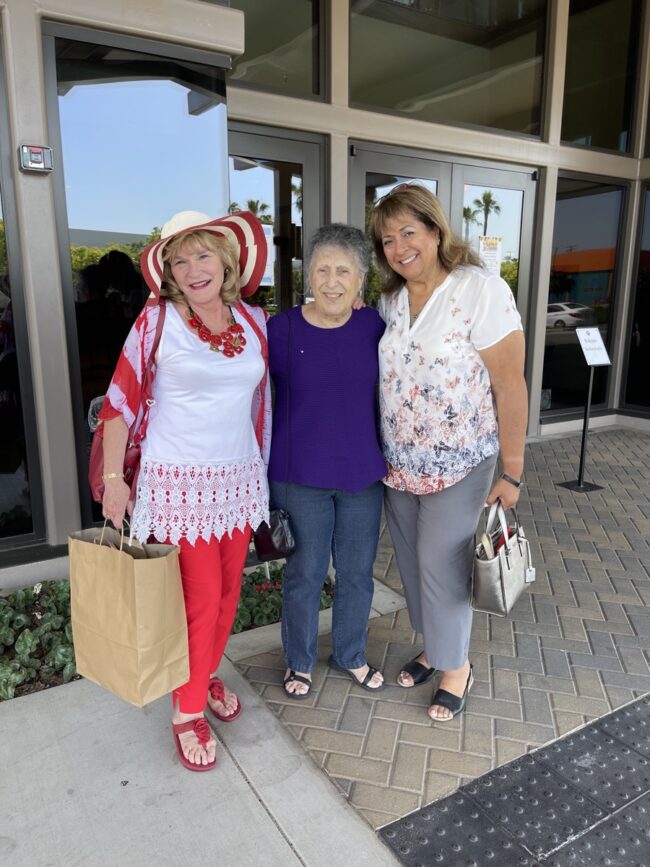 We are departing the Elks after a great lunch!

Our weather station was going wild, and it felt like 101 degrees, except that the wind cooled things down.  I continued in the garage, and Mary worked in the office; we are making headway!

It is so hot… the birds have to use potholders to pull worms out of the ground. 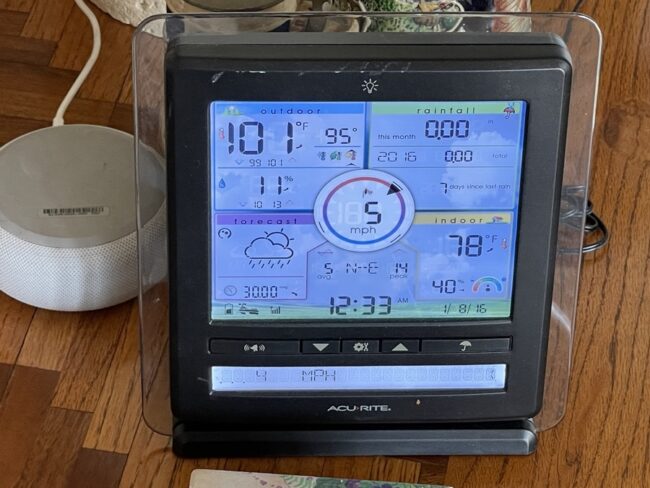 At 8:00 PM, we stopped, made some phone calls, and then got ready to hit the Swim Spa.  It was 10:00 PM before we were submerged in the people soup!  The outside temperature was still in the 70s, and we watched the Moon trace a path across the sky!