Two More Days After Today And We Can Play 24×7!

The best part about retirement is that you don’t have to worry about getting caught for doing nothing.

Age is a fantastic thing!  I just got my membership card in the AAA, and it says FIFTY YEARS. I get so confused! How can that be when I am only forty years old? 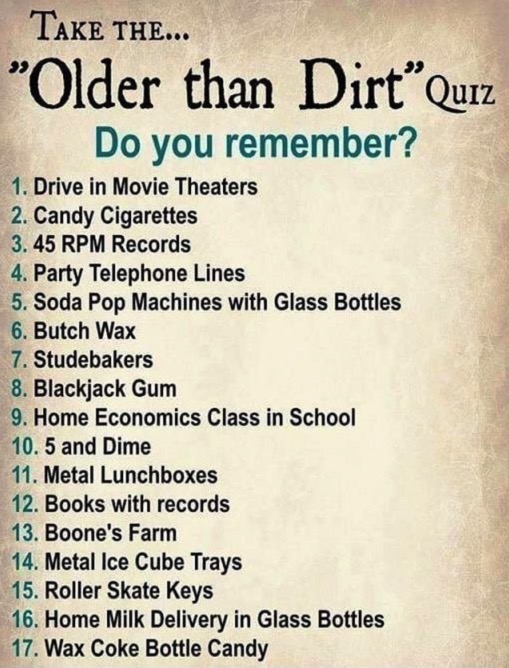 Today was a little sad because it was Mitch’s birthday, we lost him a year ago and he it still missed greatly by all of us!

We walked Five Miles this morning, and he enjoyed it sniffing every single thing there was to sniff!  When we returned, we washed his ears as they tend to get infected.  From the dog’s point of view, we are elongated and abnormally cunning dogs.

Mary decided we should throw a ball for Scout shortly. It’s a bit extravagant, but it will be his birthday, and he looks great in a dinner suit. 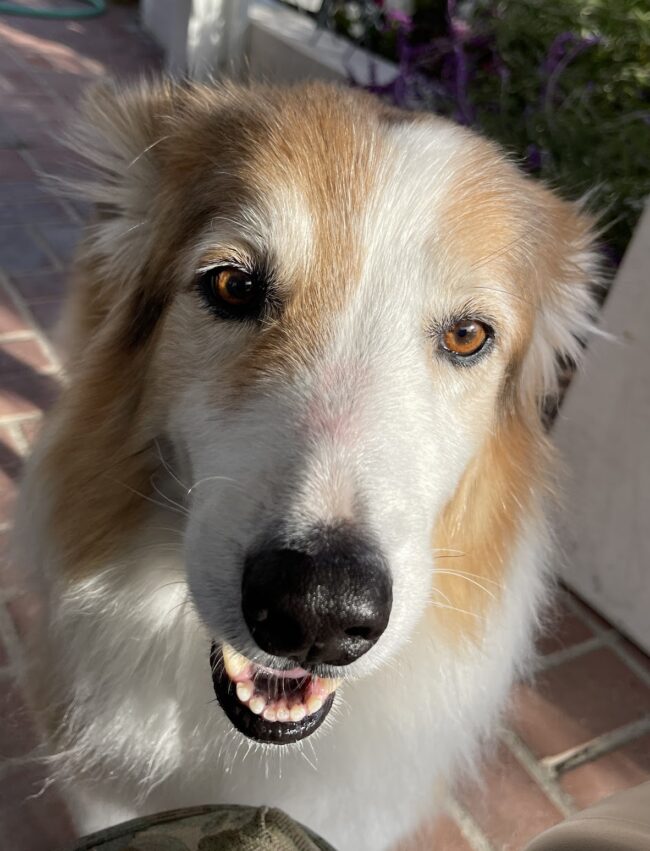 Mary is making a beauty shop appointment for him on Wednesday before Thanksgiving, so he will be “pretty” and stink nice.

At 8:05 AM, I heard the familiar sound of stretching tires and smelled burnt rubber!  Ah ha, Mary was heading to work in the hot rod rocket.   She has Friday and Monday to go, and she is retired!  Now we can play 24×7! 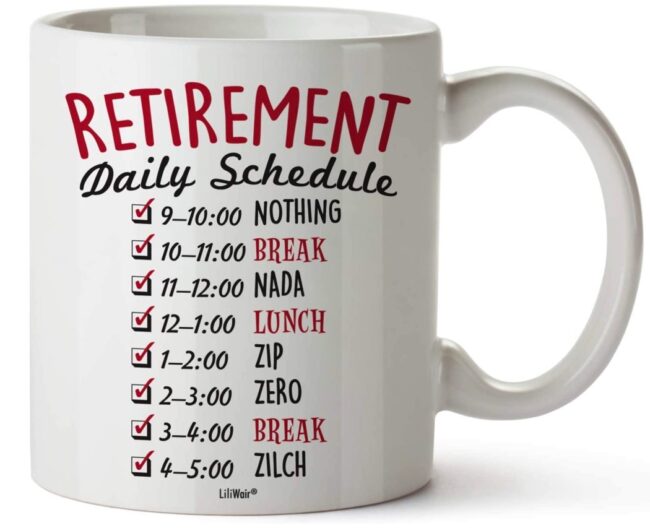 After Mary got home, she decided it was Aces for lunch.  She offered me a ride in the rocket, and I dug deep in my pants and gave her an E-Ticket.   I don’t think she drives too fast, but the paint was hot to the touch due to air friction.

I overate with the famous Aces burger.  She, of course, was well behaved and had a salad.

Aces now have an internet jukebox. I dug through my pockets, and Mary dug in her purse; we retrieved three whole dollar bills.

Mary went first, and I must stay her first choice raised some eyebrows.  The name of the country song she accidentally selected I have forced myself to forget, but it was something about a woman, a dog, and a can of beer plus an old pickup truck.

The clientele begged her NOT to make another selection but then mastered the machine and out popped The Tennessee Waltz; we danced to the tune before lunch was served! 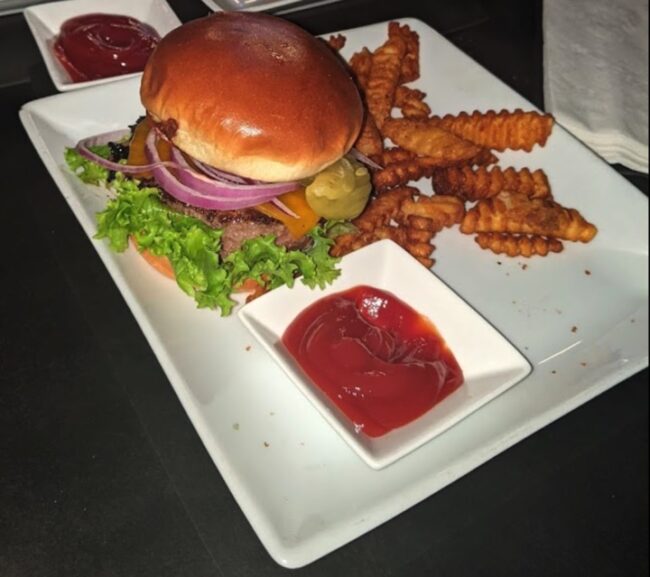 It came complete with a fried egg!

We returned home and took a thirty-minute nap; I have her in training to be retired already.

When we got up, we did some planting and did another pass through the Thanksgiving Day plans.  Everyone has something to be happy about!  The first thing we will do is go through the pictures from last year!  This year we are having about twenty people over for the feast! 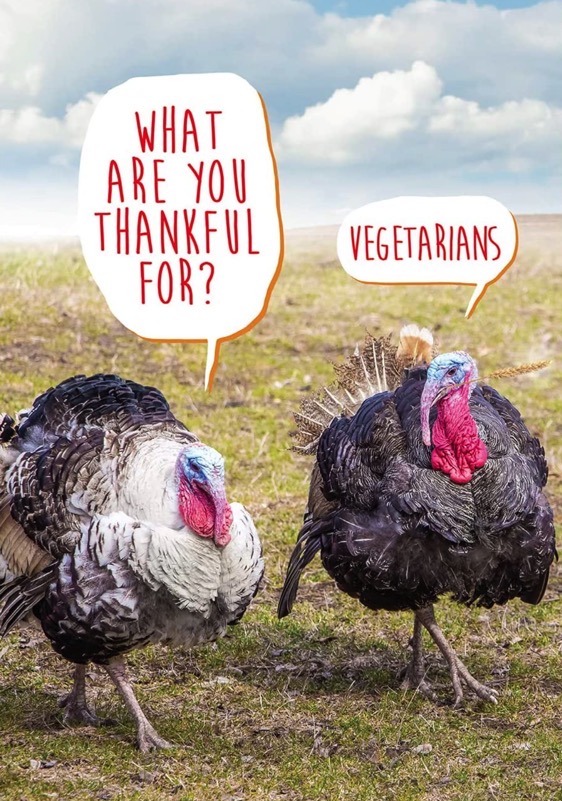 We hit the front yard digging over forty holes with the power-auger and planting tulips and daffodils!  This planting was the first time I did bulbs on purpose.

Did You Know? The term “bulb” is used by most people to refer to plants with underground, fleshy storage structures. Only some of the plants commonly called bulbs actually are bulbs. The definition of a bulb is any plant that stores its complete life cycle in an underground storage structure.

The primary function of these underground storage structures is to store nutrient reserves to ensure the plants’ survival.

The true bulb has five significant parts. It contains the basal plate (bottom of bulb from which roots grow), fleshy scales (primary storage tissue), tunic (skin-like covering that protects the fleshy scales), the shoot (consisting of developing flower and leaf buds), and lateral buds (develop into bulblets or offsets).

We needed to plant them 4″ deep, so I marked the auger, and the rest was easy! After dropping the bulb into the hole, we covered it with good potting soil and applied a slight pressure (I stepped on them). 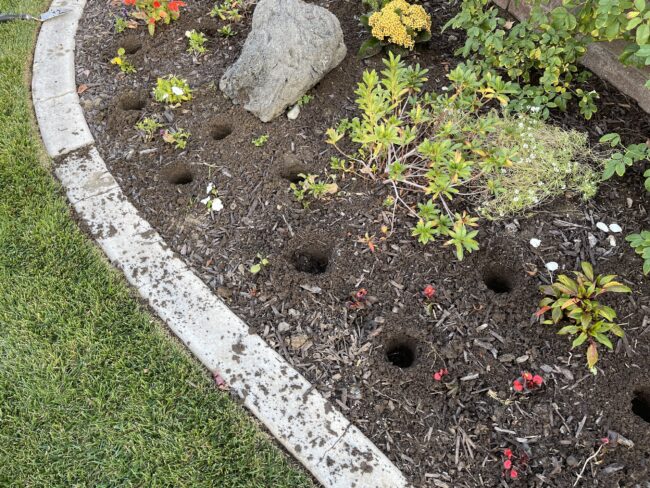 The spacing was NOT scientific.

The tool of the day was my Makita cordless drill with the auger bit I got from Amazon. It works amazingly well! I bought two of them, one for the front yard and one for the back! 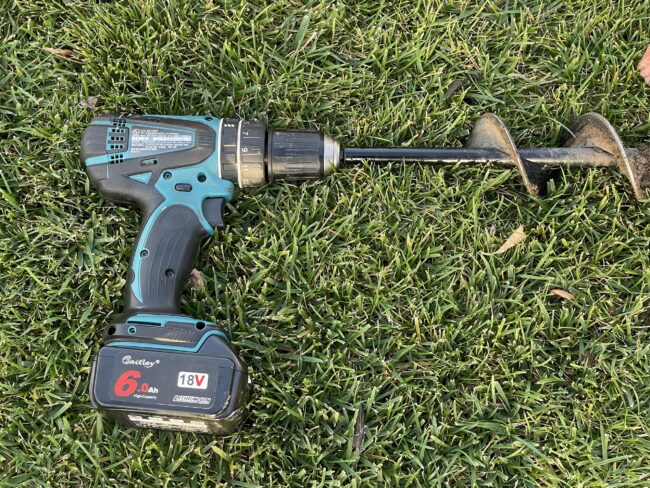 It attaches to the Makita just like a drill bit! 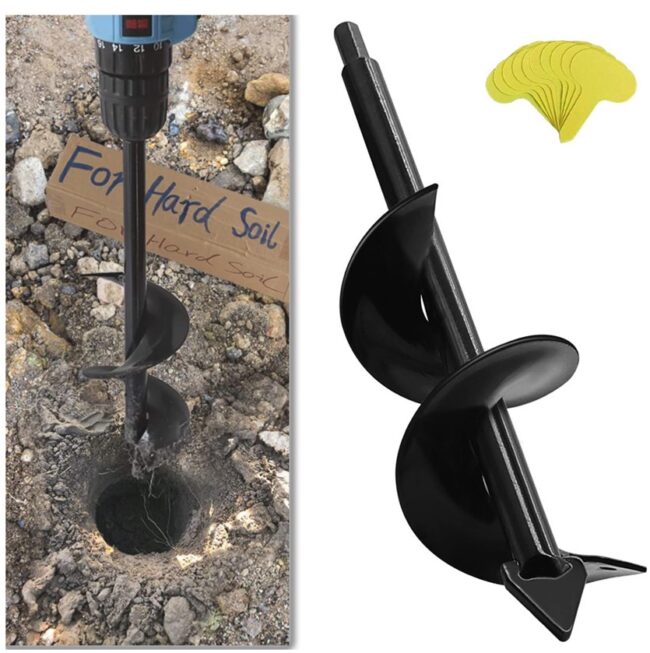 Mary is placing the bulbs into the holes, and then I come back by the fill the holes with planting soil and apply pressure. 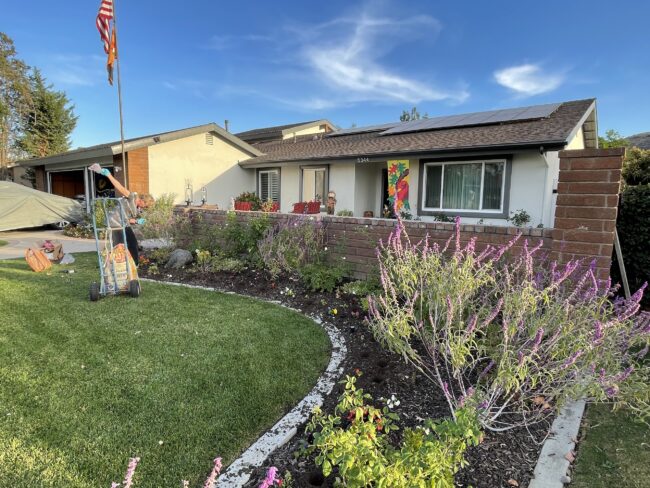 We did the whole front in an hour.

This technique beats the heck out of a shovel and digging by hand because it loosens the soil, and all the holes are the same depth. 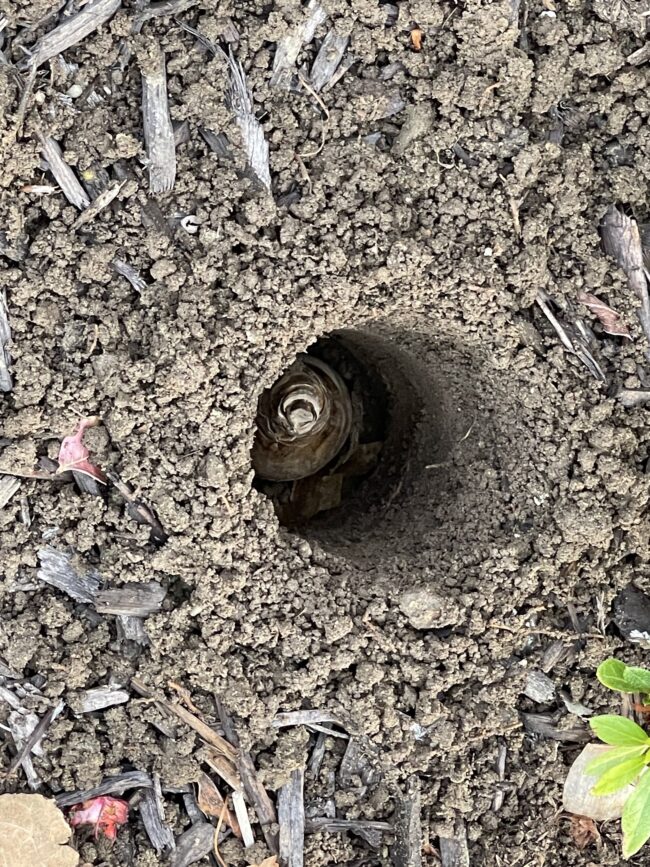 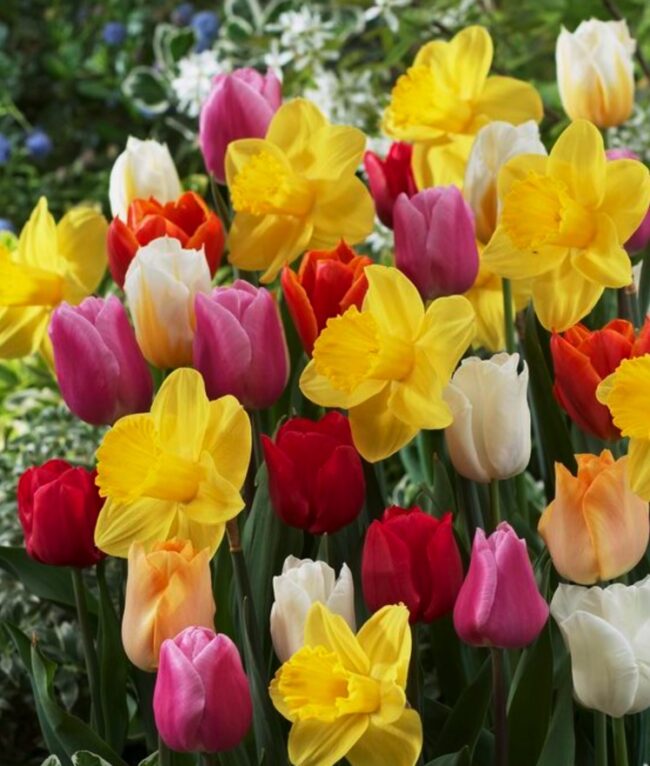 Mary and I love to work in the garden! Daffodils have become a National Emblem of Wales alongside the leek. They are  traditionally worn on St David’s Day as this tends to be the time of year daffodils start to appear.

I also had to remind Mary that I knew where bees go to learn about pollinating tulips?  Duh, Plant Parenthood.

We took the remaining fifteen bulbs to the backyard, and we will work there in the morning after our coffee.  The weather is supposed to be in the low 70s, so it is perfect gardening weather. 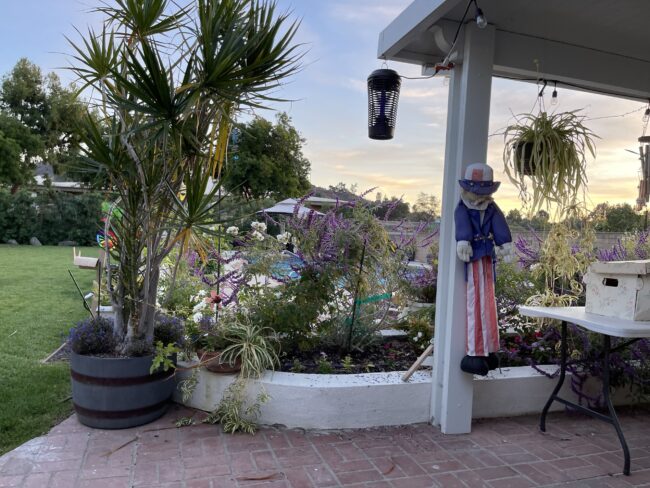 It got too dark to do the backyard.

We called Lisa, Zack, and Robin before watching TV.  We watched the rest of “The Great Race” in the living room, and Mary fixed a lite snack as the late lunch was pretty filling.  I took Five Miles out to water the grass after the movie, and the moon was bright, so out came the camera. 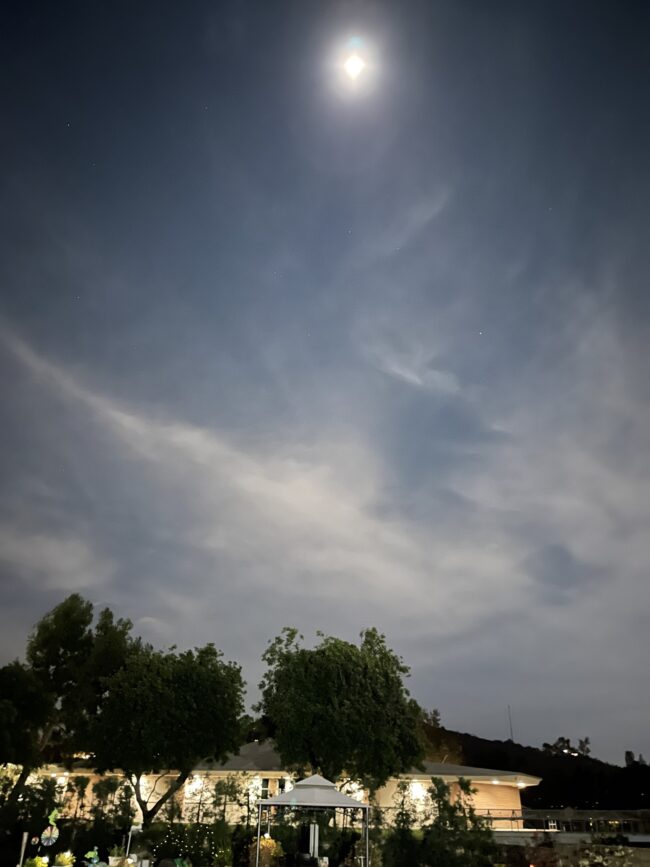 A beautiful 55-degree evening was ahead for us.

We went to bed but managed to watch another movie before crashing at midnight!  The movie was Hatari with John Wayne. Hatari! is Swahili for “danger”—and also the word for action, adventure, and broad comedy in this two-fisted Howard Hawks effort. John Wayne stars as the head of a daring Tanganyka-based group that captures wild animals on behalf of the world’s zoos. Hardy Kruger, Gérard Blain, and Red Buttons are members of Wayne’s men-only contingent, all of whom are reduced to jello when the curvaceous Elsa Martinelli enters the scene. In tried and true Howard Hawks fashion, Martinelli quickly becomes “one of the guys,” though Wayne apparently can’t say two words to her without sparking an argument.

Tomorrow Mary gets to practice being retired again!  No work until Friday!

Just an old retired guy trying to finish out my last years on this planet. I lost my best friend and wife in early 2020. I was blessed again by reconnecting with Dr. Mary Côté, a long-time friend. Mary and I got married July 28th, 2021, and are enjoying life together and plan to spend the rest of our lives being a blessing to our friends and family.
View all posts by Paul →
This entry was posted in Dining Out, Working Around House. Bookmark the permalink.