To The Movies: Seventeen Again

Popular high school senior Mike O’Donnell (Zac Efron) seemingly has it all. He is a star athlete headed straight for a college scholarship when he decides to give it up to settle down with his high school girlfriend Scarlet is pregnant. 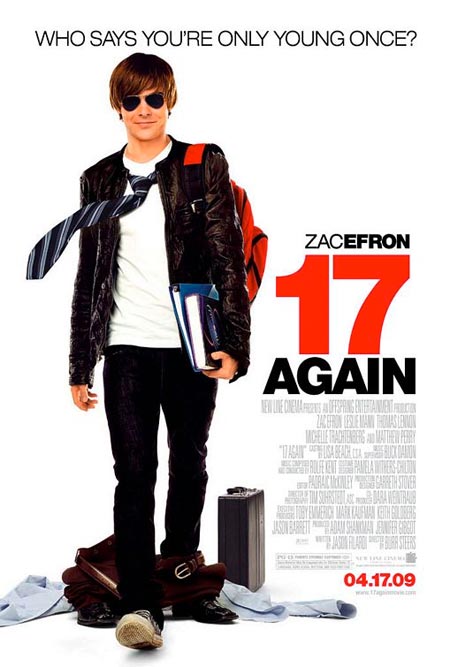 A funny movie for all!

Twenty years later, an adult Mike (played by Matthew Perry) finds his life is not exactly what he expected. He is separated from his wife, Scarlett (Leslie Mann) and living with his wealthy software genius nerd and best friend Ned Freedman (Thomas Lennon), his career at a pharmaceutical company is at a stand still, and his relationships with his teenage children are nonexistent. After getting passed up for yet another promotion at work, he returns to his high school to reminisce over his basketball awards and the life he could have had. While he is reliving his glory days, he is approached by a janitor and shares with him how things were so much better when he was 17.

As Mike is driving home from the high school, he sees the mysterious janitor standing on the ledge preparing to jump into the Los Angeles River. Mike rushes out of his car to rescue him, but when he gets there, the janitor has vanished. What Mike doesn’t realize is that he is about to fall into the river and turn into his 17 year old self.

We found the movie amusing and quite funny and judging by the other in the audience, so did they!

Just an old retired guy trying to finish out my last years on this planet. I lost my best friend and wife in early 2020. I was blessed again by reconnecting with Dr. Mary Côté, a long-time friend. Mary and I got married July 28th, 2021, and are enjoying life together and plan to spend the rest of our lives being a blessing to our friends and family.
View all posts by Paul →
This entry was posted in Fun, Movies and tagged Movies. Bookmark the permalink.