Friday Is Here And It Is A Special Day 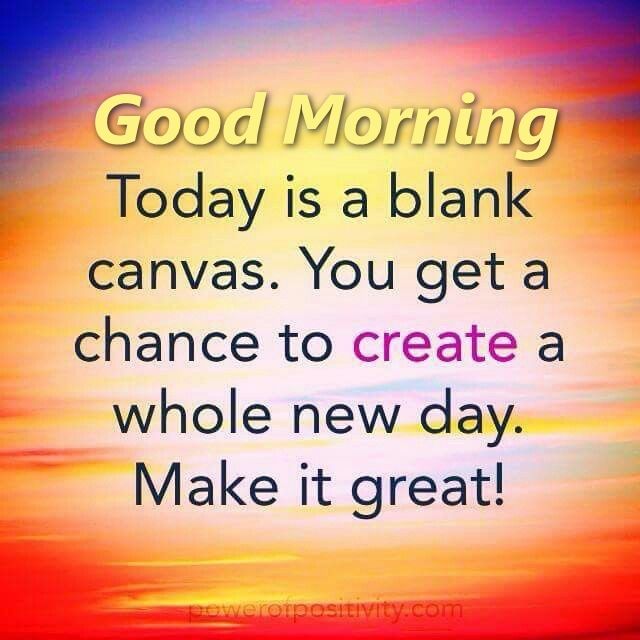 Today is LifeDay, a celebration Sue and I had every year since she was diagnosed as having lung cancer and was given maybe a year to live.  She took the bull by the horns, twisted his neck, and went twenty-three years passing with no sign of cancer.  She was a fighter!  Join us for Life Day twenty-two, always celebrated at Disneyland.   Robin and Bob had joined us for the last many years.

I never thought this day would come without my beautiful bride not being with me, but its life and things indeed change.  While we did not go to Disneyland, we did celebrate by going to dinner with Robin and Mary at Patty’s Place for several reasons.

So Mary called mid-afternoon, and she was “out of patients,” a great play on words.  I picked her up, and helped me get ready for the pumpkin carving party we have planned for tomorrow.

I could handle the chairs and tables and stuff, but the decorations and munchies needed a lady’s touch.  I am sure Sue is smiling and enjoying Mary and me working together, getting ready for the family. On the luck scale of one to ten, I am somewhere around 67,876,567,351, off the scale!

We had a card table and thought, why not set up a puzzle for everyone to work on! 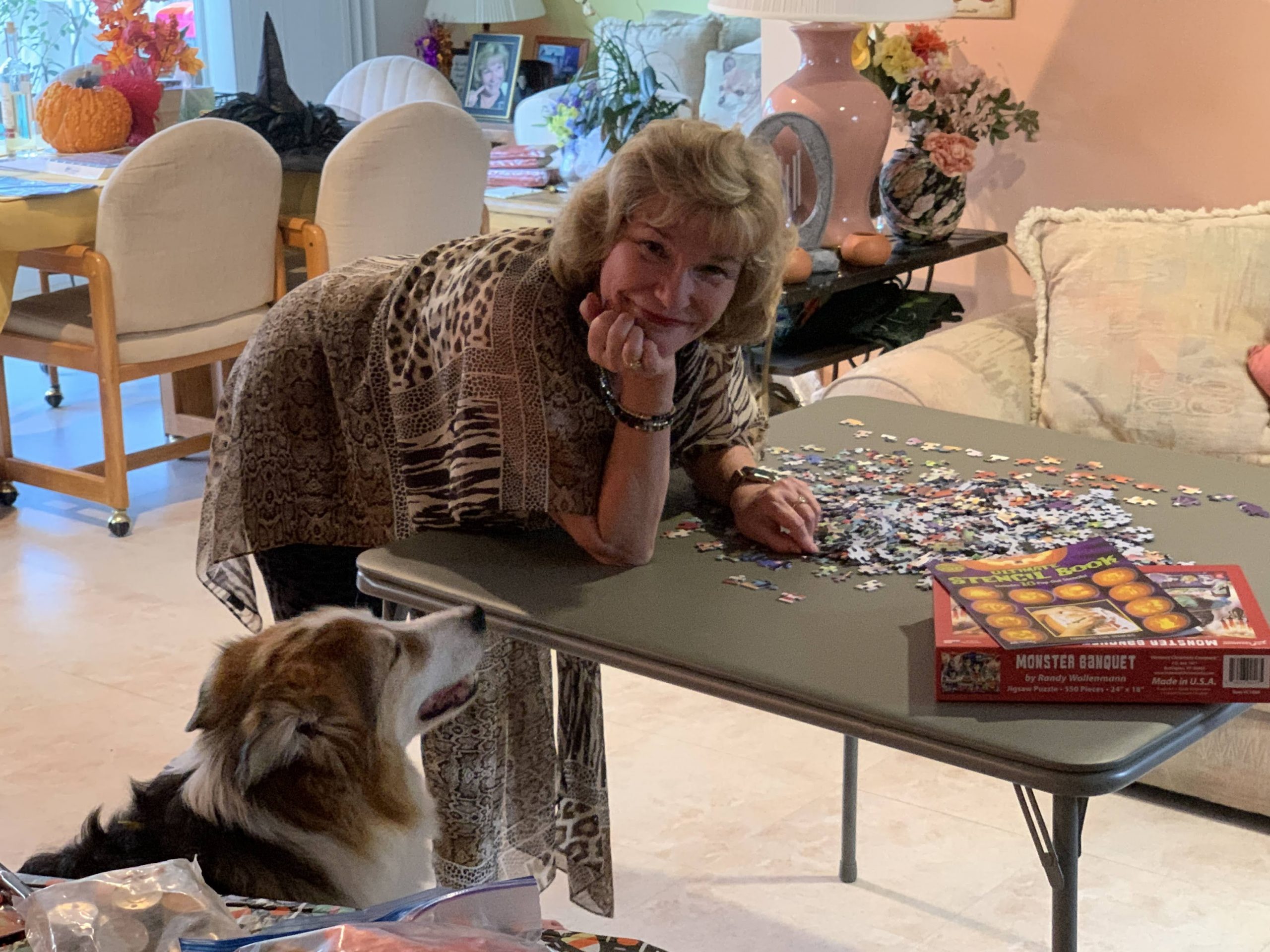 The secret is Scout; he does puzzles very well, especially when they need to be disassembled! 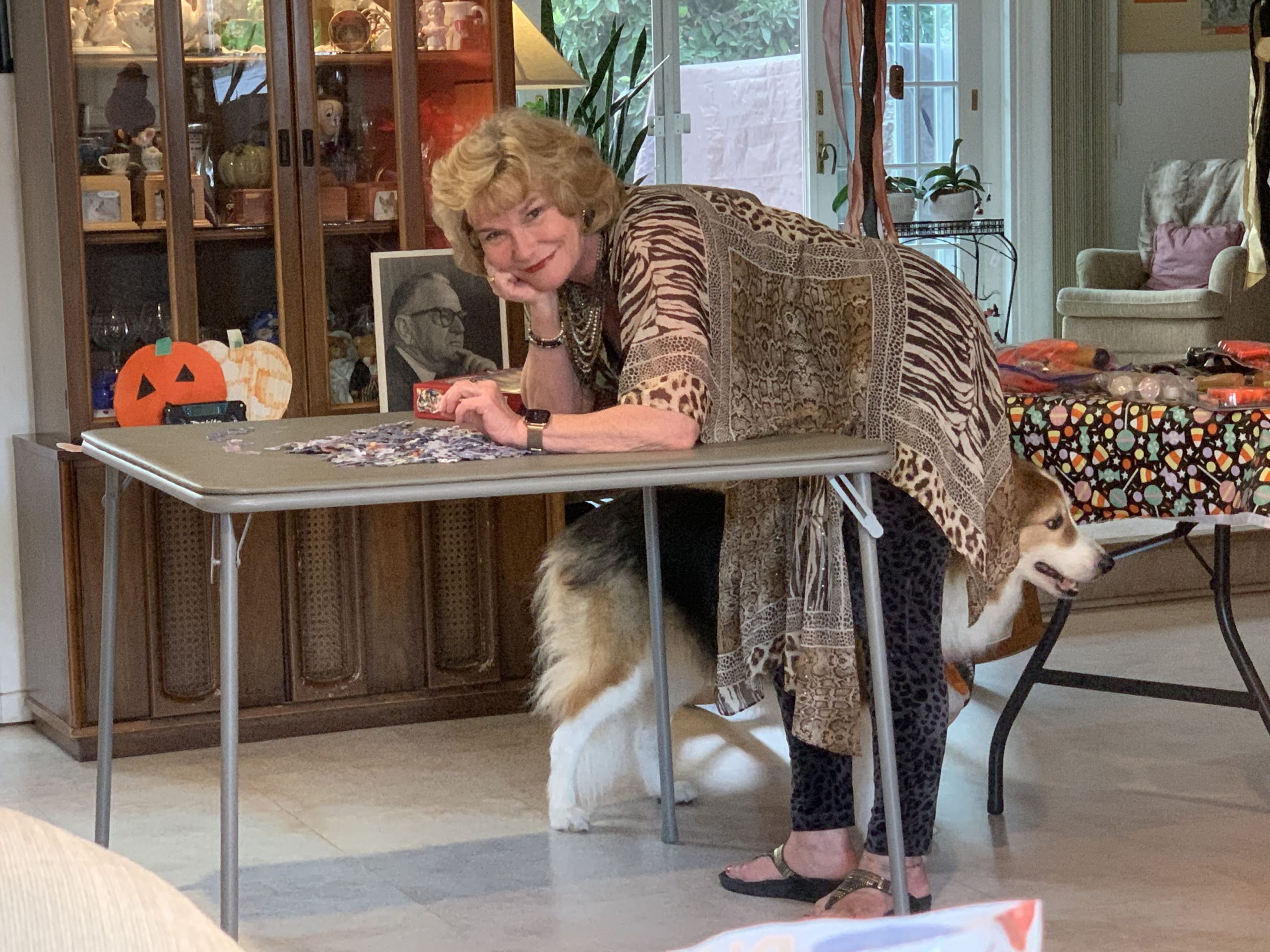 I had to ask Mary to slow down, or the puzzle would be done before anyone got here!

Mary made the place look very nice and knew how to serve the snacks and goodies.  It felt quite right.

It was becoming 5:00 PM and time to have a margarita.  I made up three of them, and on the first sip, Mary says, “Hey, where is the alcohol?”  So, into the liquor cabinet, I strolled, a place I do not spend much time.  However, I found some special tequila, and we added that to the margarita mix.  Robin and Mary gave me the smiles of approval.  I quickly ran around the house, putting out the candles; we would not want an explosion now, would we?

6:00 PM and time to go to Patty’s Place.  It’s only about four miles down the road, so it is quite easy.  Chuckles saved us a table for three. 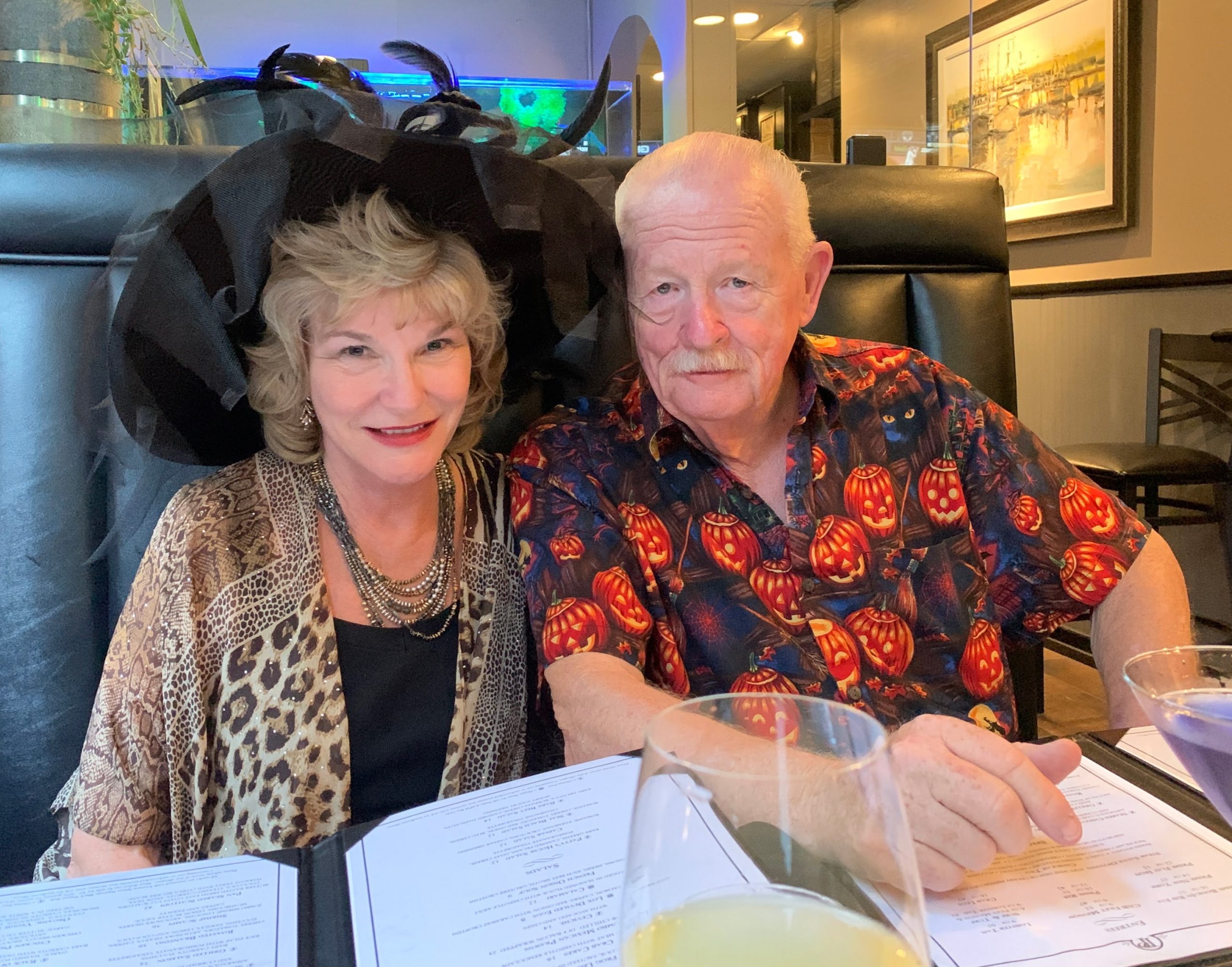 We asked Mary NOT to do her witches cry as it could send the staff and customers running out the front door.

Robin rode along with us as she stayed this evening with me because she works in Seal Beach tomorrow.   We had a ball laughing and giggling all evening.  Chuckles had to come to quiet us down only twice this evening; I guess we are getting better? 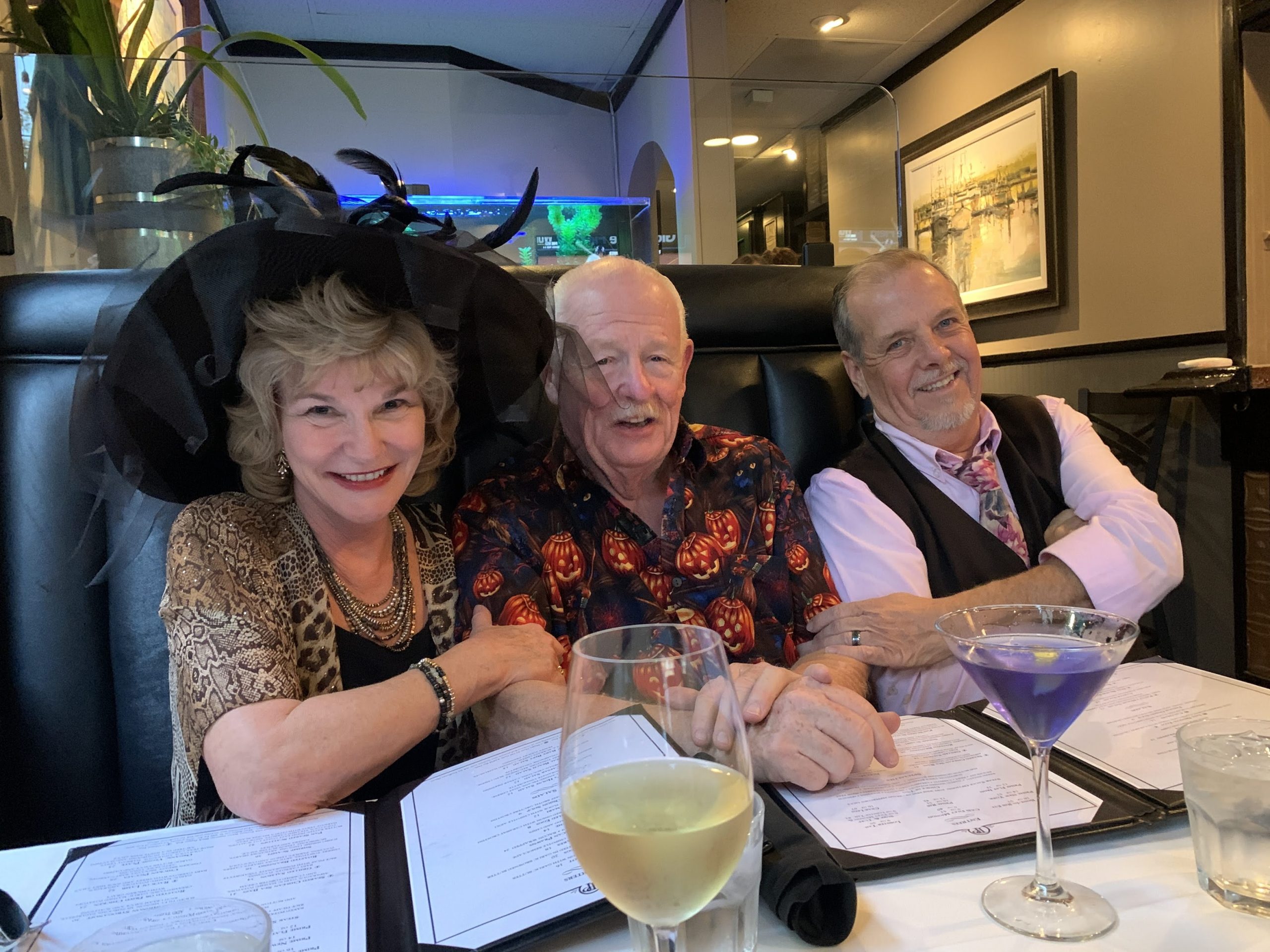 We introduced Robin to one of the regulars who has become a friend.  Jason joined us for a while, and we all chipped in and bought him a beer! 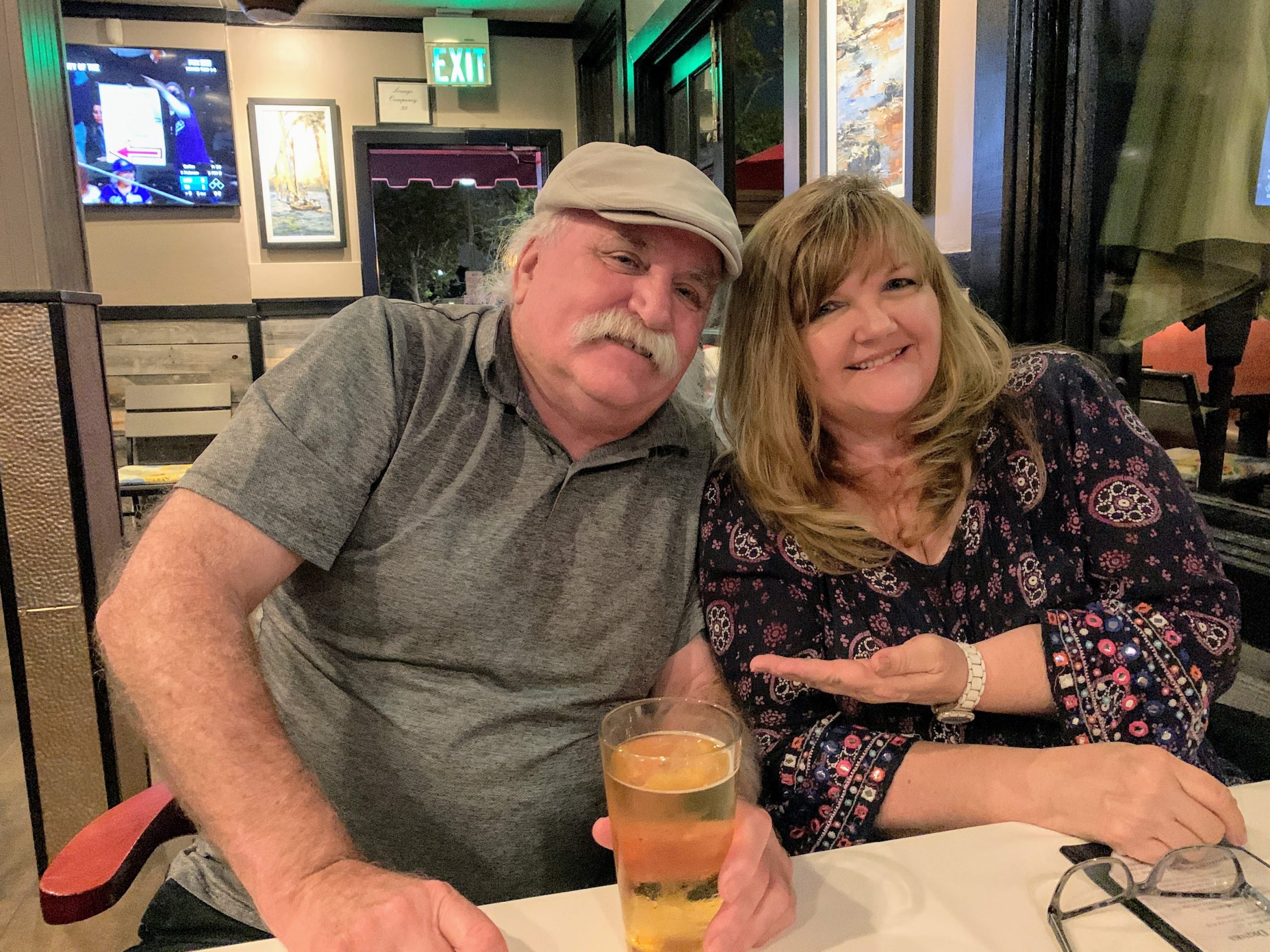 Patty’s Place is much like Cheers, where everyone knows each other!

After getting home (to my house), Mary, Robin, and I jabbered for a while, and then Mary wanted to see me in her witch’s hat.  Dang, that I won’t do for a beautiful lady! 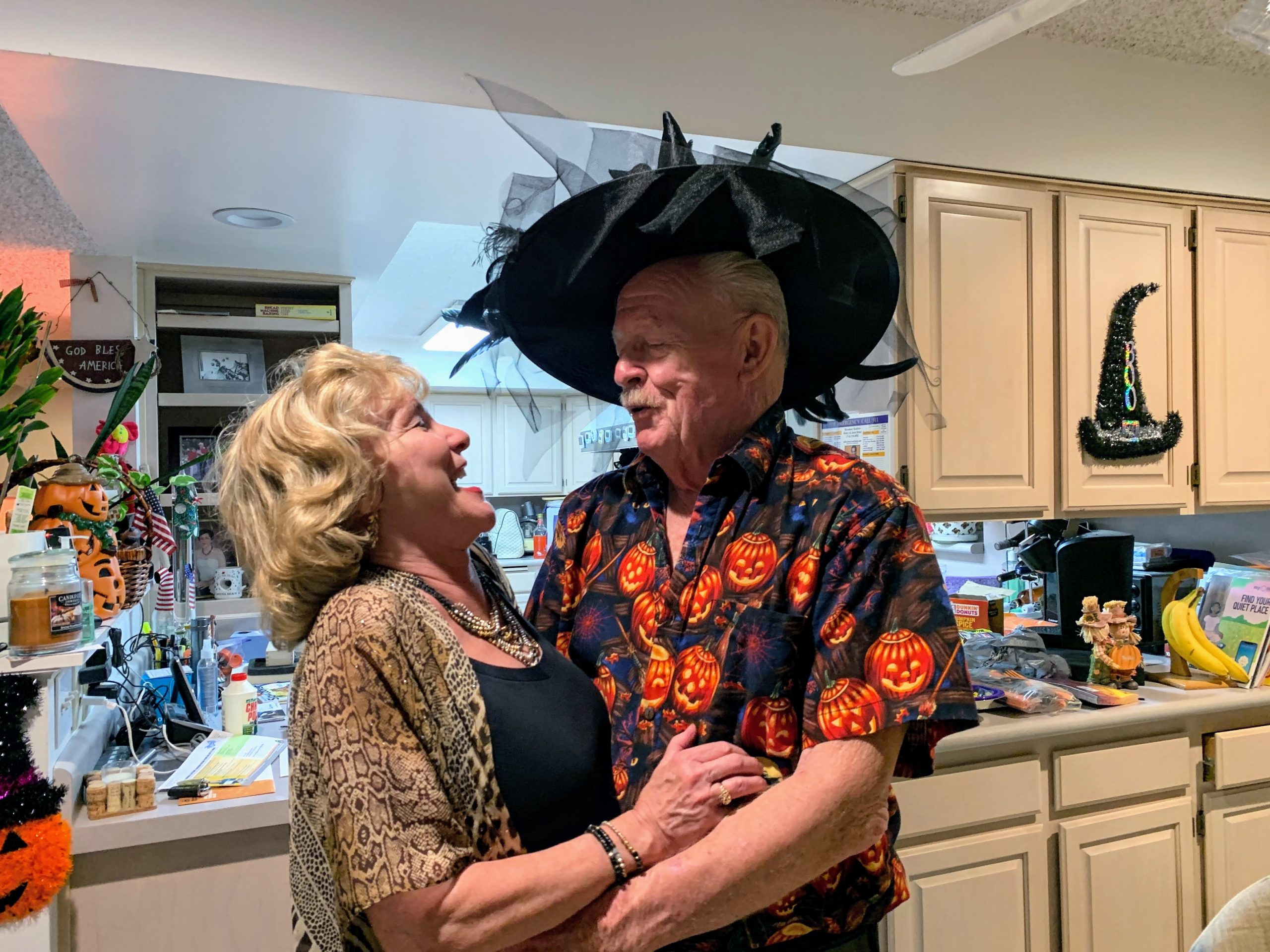 The Jury is still out!

I heard a faint whisper and listening carefully; it was Scout.  He was saying, “Hey, you two!  Your hogging the camera!  How about a picture of me to give you two real class!” 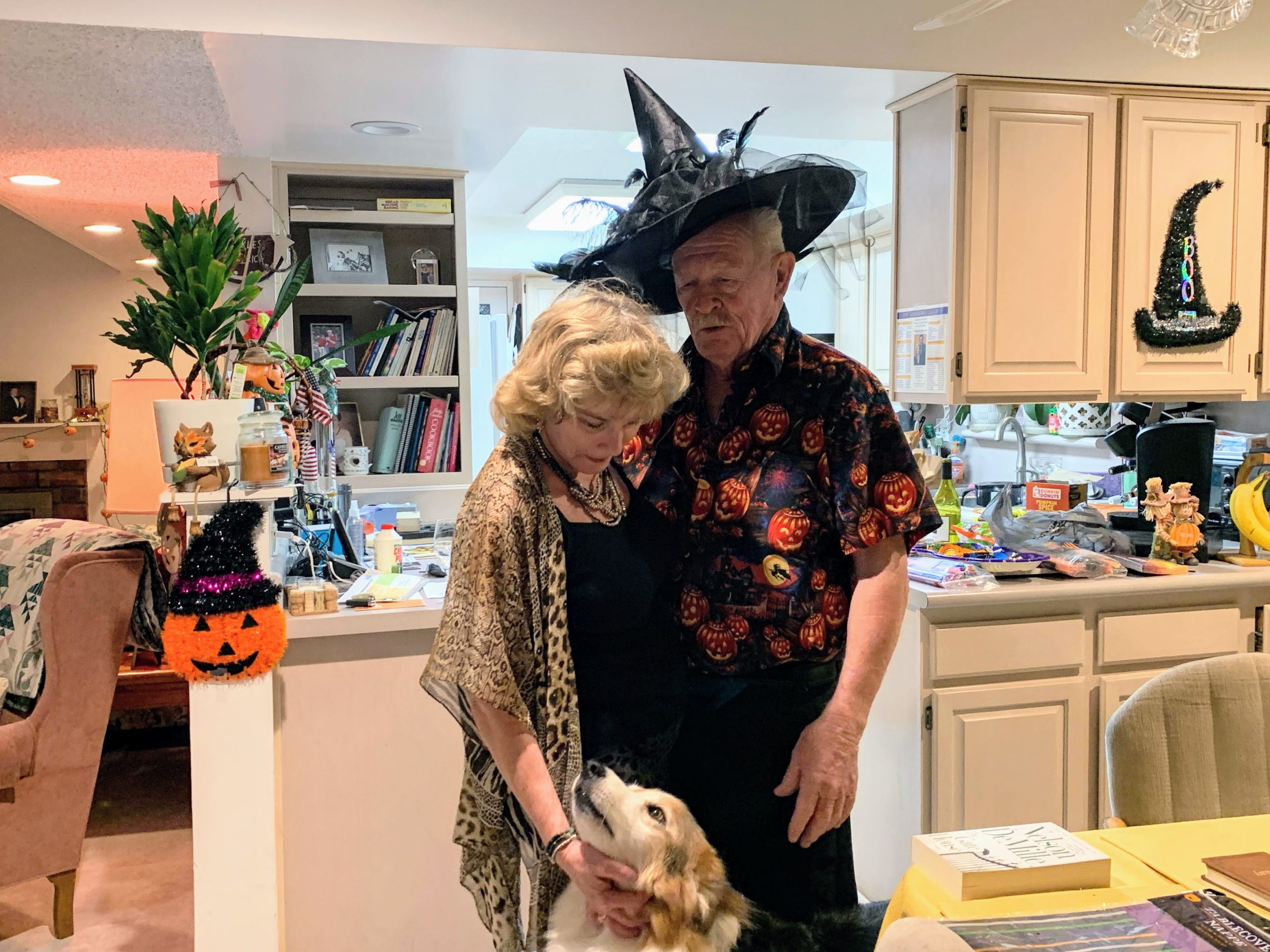 The little fella was right! He did add class to the photo!

Before we jump into the pool, I decided I needed some poses from “the witch.”  Mary donned the hat and fashed some smiles. I think there was a spell or two buried in those smiles because I started to act goofy.  But how would anyone know since I am normally goofy?  Another puzzlement! 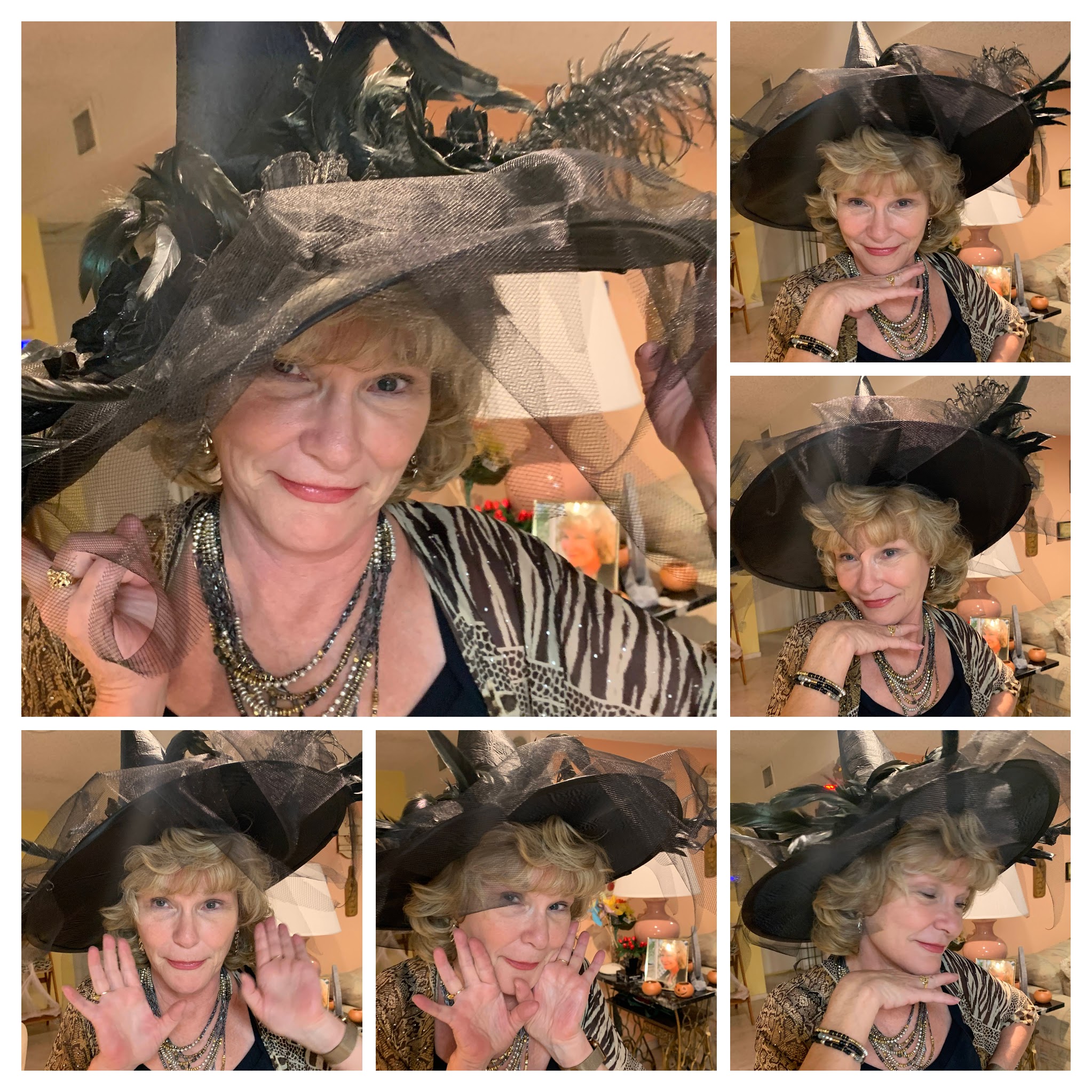 She gives a new meaning to the word “Bewitched”!

Just an old retired guy trying to finish out my last years on this planet. I lost my best friend and wife in early 2020. I am involved seriously with a long-time friend, Mary, and life goes on.
View all posts by Paul →
This entry was posted in Dining Out, Family, Food and Wine, Friends. Bookmark the permalink.
Powered by Maribol IMDB Plugin