Ah, The Sweat Sounds Of A Jackhammer!

“We’ve shared our lives these many years. You’ve held my hand; you’ve held my heart. So many blessings, so few tears – yet for a moment, we must part.” – Author Unkown

It was ten years ago, and Sue suggested we all go see “The Mussies” at the California Science Center, so the Adams and Duda’s and we headed to CSC.  We had a pleasant visit to the center culminating in an I-Max movie.   Sue loved reading all the placards on the displays and then translating them to Nick and Theo.  She was so patient with the grandkids, and they understood her patients and love.

After the visit, we went to the LA Farmers Market and had a magnificent lunch at their French Restaurant, Marcel Marceau’s.  The vegetarians had a field day while us meat eaters enjoyed some serious pot roast.  It was another fantastic family outing which my dearest Sue always enjoyed these events, and as soon as we got home, another plot would begin to develop.  Where should we go next?  Sue made everything special. It was the way she rolled! 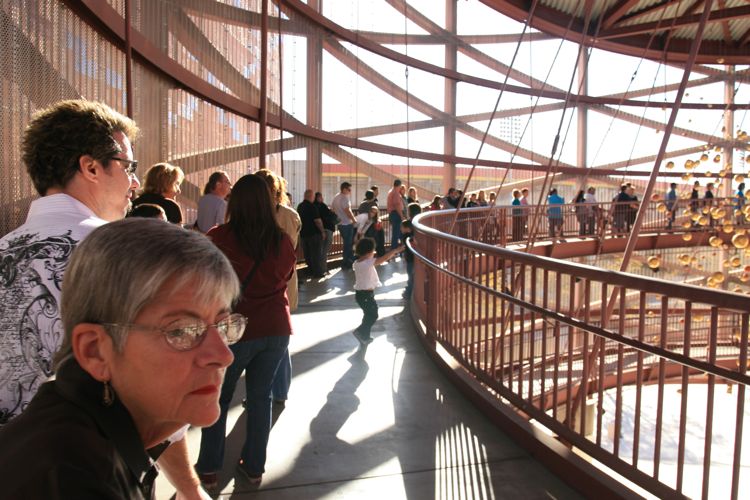 Today is the 6th, and someone is having a big birthday, Miss Logann!  Presents and family and fun times.  She is a pretty girl and our third great-grandchild.  Sue and I set up a 529 for her, which someday she will appreciate.  We thought that that idea was better than “stuff”.  Sue was so smart!   Have a beautiful day, Logann!

“I am THREE years old today!”

Meanwhile, back in the bathroom, the concrete pad has been removed so the roll-in shower can be put in.  That required several inches of concrete to be jackhammered out of the way.  It all goes well, Sunday the cement will be finished, the drain installed, and everything prepared for the first pour.  The remodel and the finish date is getting exciting. 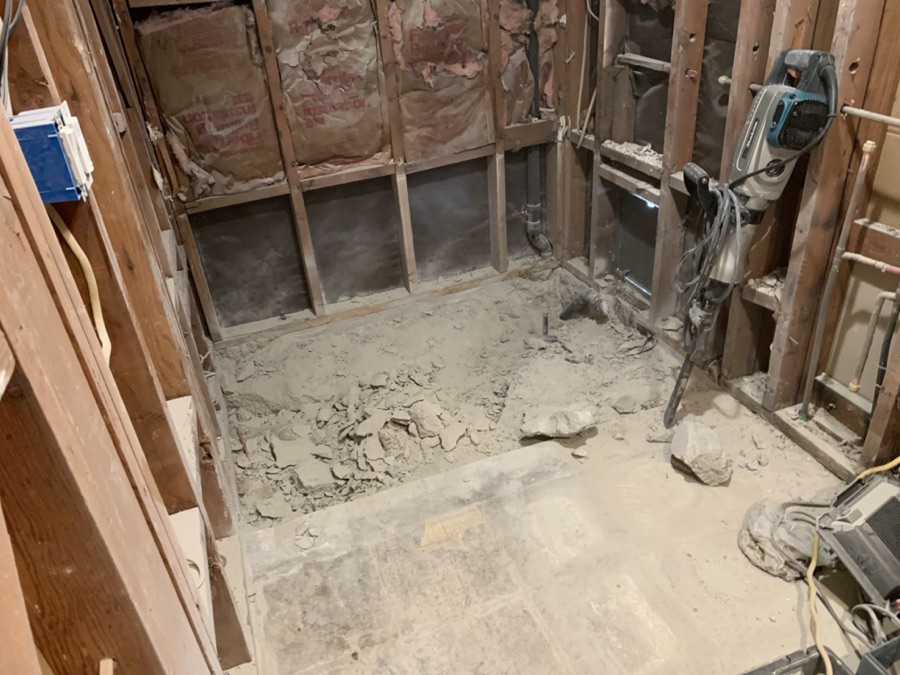 Jackhammers are very loud, and I could feel the vibration in the back yard!

When done, there will only be a 1/4 inch rise from the bathroom floor to the shower, so it is considered a roll-in.  I am looking forward to when I might need that capability.

We also decided to put in a “rain head” which means a shower head in the ceiling that recreated a rain shower! 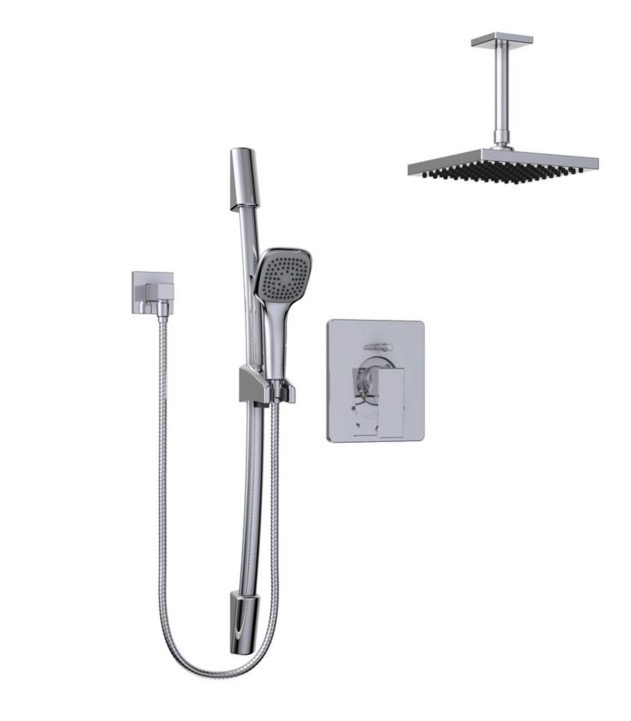 In fact, this shower will have three heads – one in the ceiling, one on the wall, and a hand-held!  (It was Joe’s idea!) 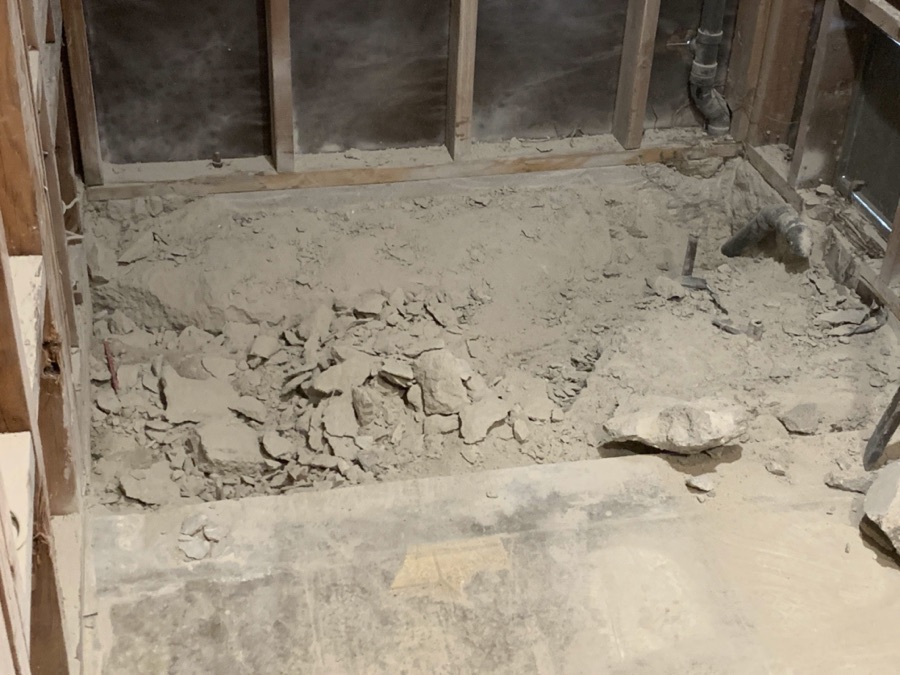 The pad was an add-on and was thicker than we thought!

While everything is open, I plan to put an outside weatherproof wall plug on the wall to make it easier when I need a power outlet outside. 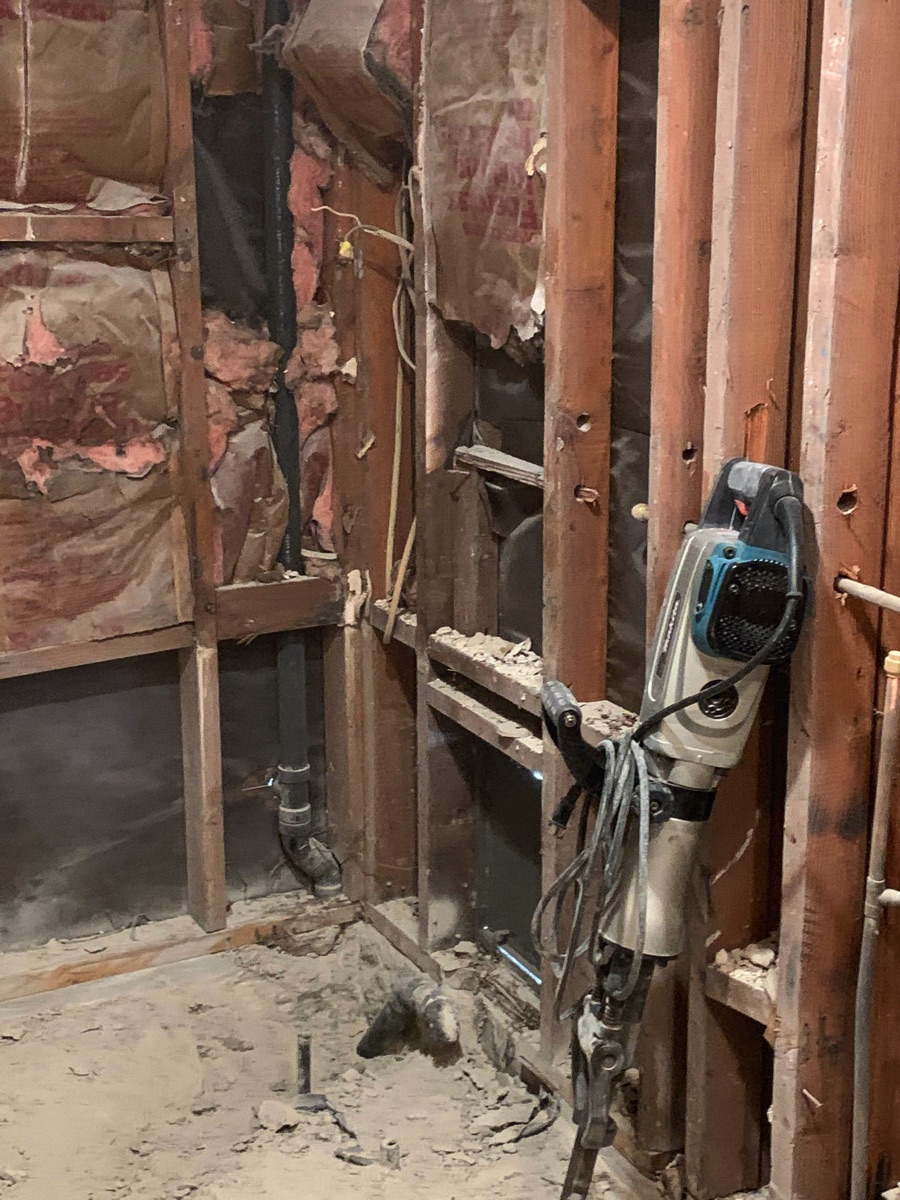 Some of the old plumbing now shows.

I worked in the garden for several hours today, and the jackhammer job is a one-person affair.  Bob and I stopped several times to rest and chat.

The best “surprise” was when Amy, Carri, Joe, Charlie, and Alex showed up on their bicycles.   I knew they were coming but I was not sure exactly when. They rode 10.8 miles from La Mirada to my house using the San Gabriel Bikeway.  Now I just may get a bike and ride up their direction as I am a young 75 and that would be quite doable!  Exercise and a visit all in one event!

From Whittier Narrows, the path follows the River north into South El Monte, Baldwin Park and Irwindale to the Santa Fe Dam. The route crosses the river on Arrow Highway next to the main spillway, then loops back to climb a steep ramp up to the rim of the dam. The path traces the side of the dam around to the east of the flood basin and park, with access to Azusa Canyon Drive (main entrance to park). The path ends at State Route 39, where it exits the canyon in the north of Azusa. 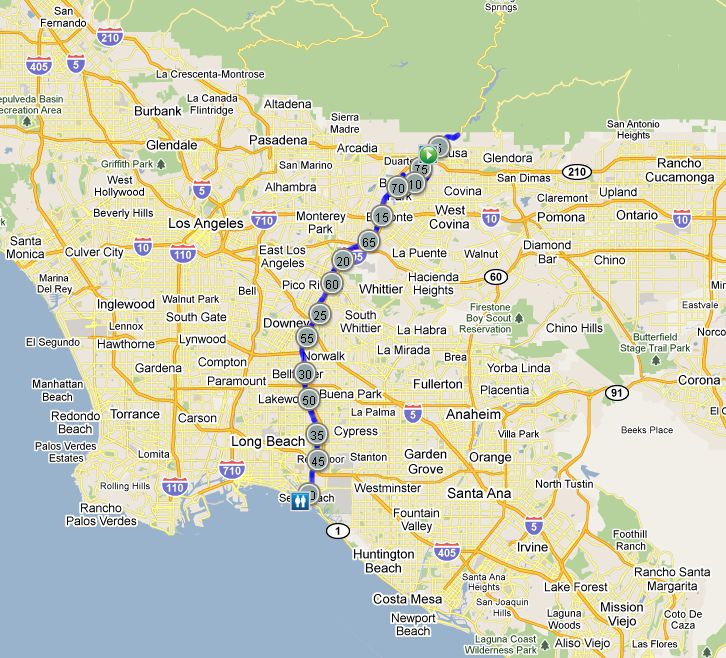 They went west from La Mirada and then connected to the trail zipping down to my house, which is right on the path! 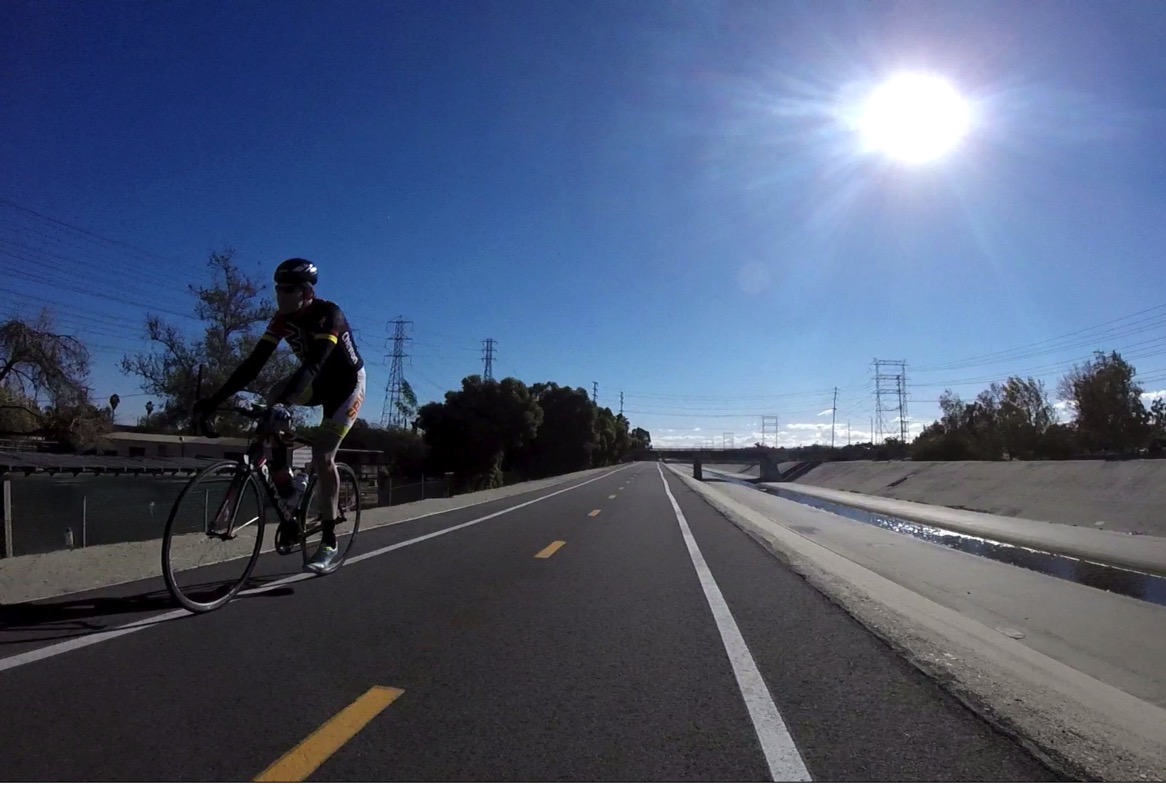 Most of the pathway is pretty good, and there are not a lot of hills between here and La Mirada.

The best thing was that Charlie was too pooped to pop, so Joe and Carri rode back home to get the truck.  Meanwhile, Amy and I had almost two hours to sit and chat.  The boys were glued to the Disney Channel.  Amy is quite a young lady, a wonderful mommy, and according to Joe and a fantastic wife.    Time seemed to go so fast while we discussed everything.  I am very proud to call her a daughter!

Note: For those of you who do not know this, Colleen (my youngest) introduced Joe and Amy when Colleen was working with Amy at the local elementary school.   Good call Colleen!!!

After they departed for home, I went back to the garden, where I had heaps of small tasks to complete.  I planted new bush beans, pulled out the sunflowers, picked some corn, pulled out the shelling peas, trimmed the suckers from the berry vines, and pulled those pesky weeds.

At 5:00 PM, I stopped and hit the showers as I have movie night and celebration of Alex’s eleventh birthday.  We watched Spiderman and dine on pizza, which was good.  I splurged and had three sliced of “firehouse” pizza. Delicious! 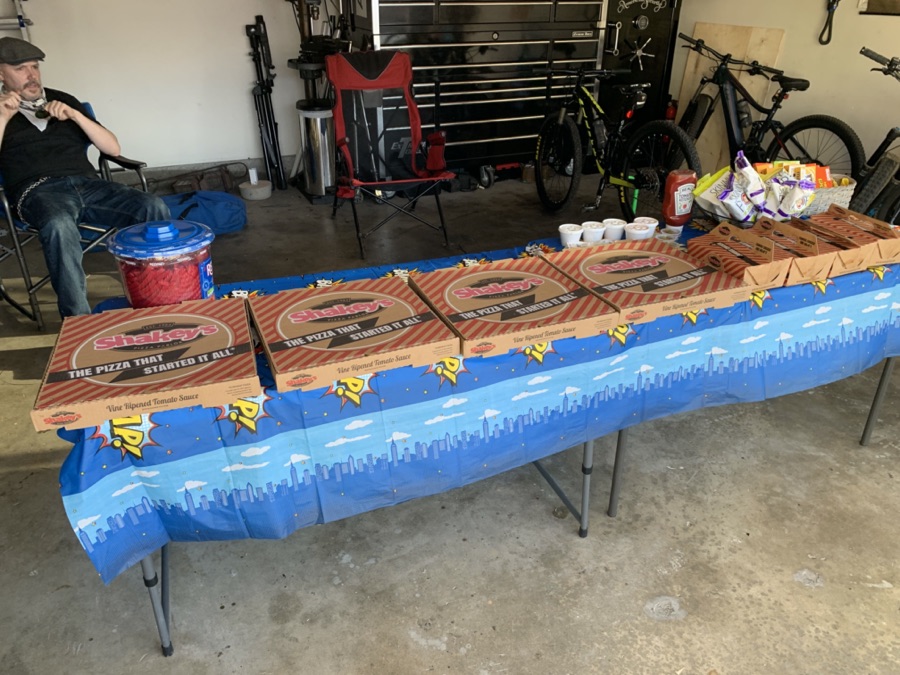 All flavors from cheese only to “kitchen sink” were served!

Birthday boy time!  Alex was terrific opening each present and thanking the people plus sharing it with everyone.  He is quite grown up for eleven. 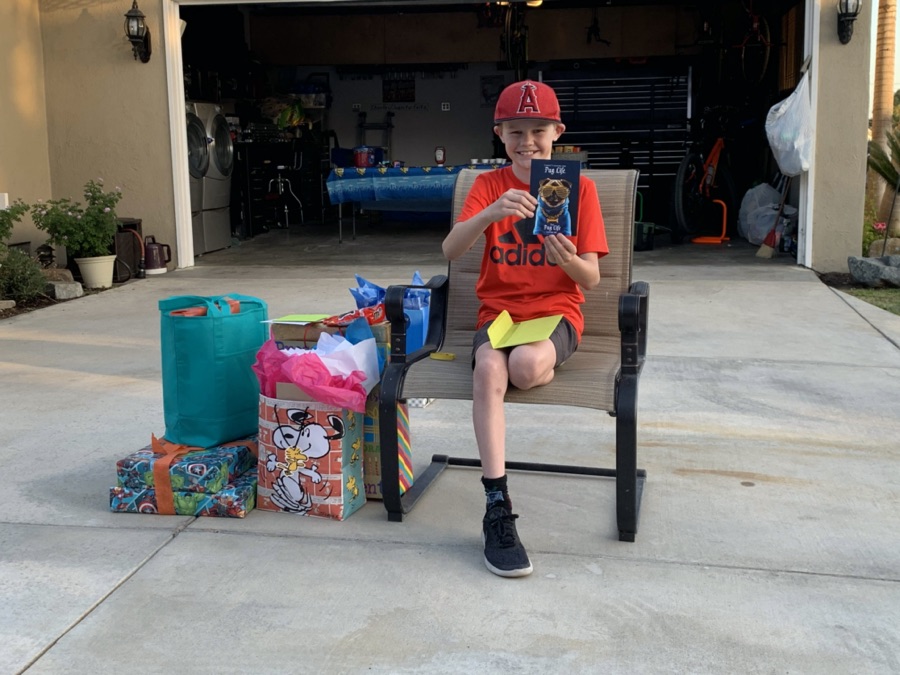 Must be something Spiderman related!

Amy, Charlie, and Apollo watched on!  Apollo was sure it was something to eat. 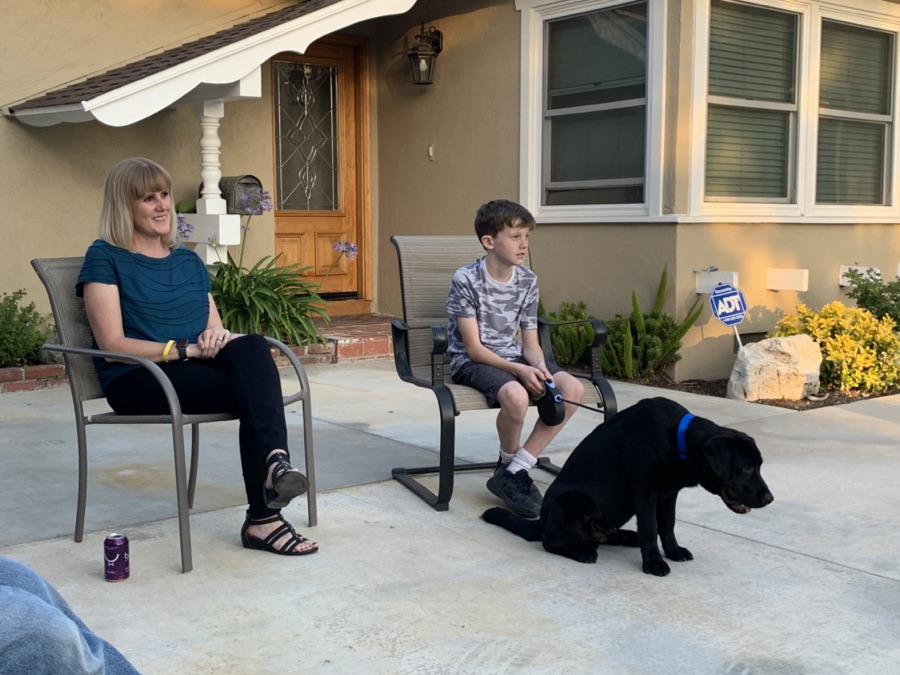 All eyes on Alex.

Grandma Sue would have liked this a lot.  Sue was an Angels fan, and we even went to a  game where the Angels and Dodgers were playing; I fell asleep!  Charlie and Alex are also great Angels fans. 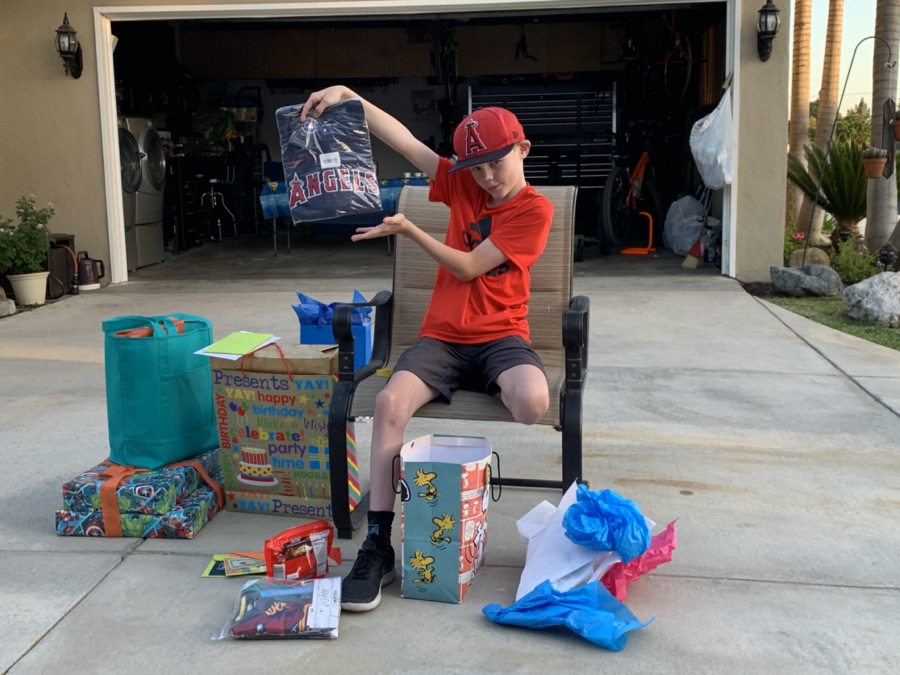 Alex was quite grown up about going slow, explaining what he received, thanking people, etc.

Several people commented on how Joe and I are so much alike.  Our senses of humor, mannerisms, one-liners, and “quick wit” was quite apparent this evening.  Poor Amy just shook her head and said under her breath, “this is what I have to live with for the next 50 years?”  I so so very proud of these two, they are doing everything right.  But after thinking about it, I am proud of all my children (Colleen, Joe, Michele, and Robin) as they all have beautiful families and are “doing it right”! 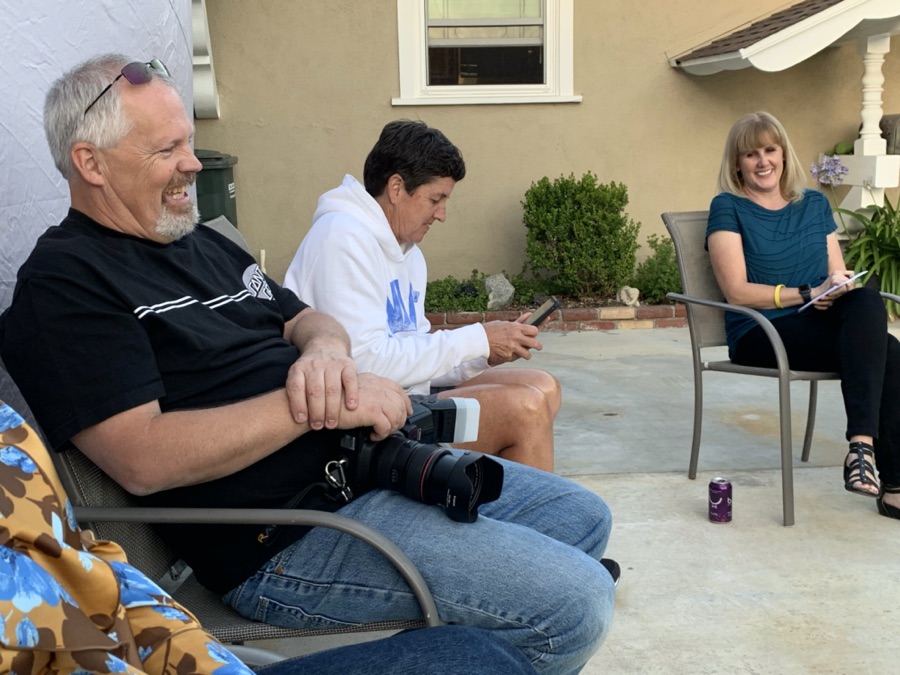 Camera at the ready!

Diane found a picture of Apollo and had it sent to a place that takes the picture and forms a silver necklace from that picture. Alex liked this item. 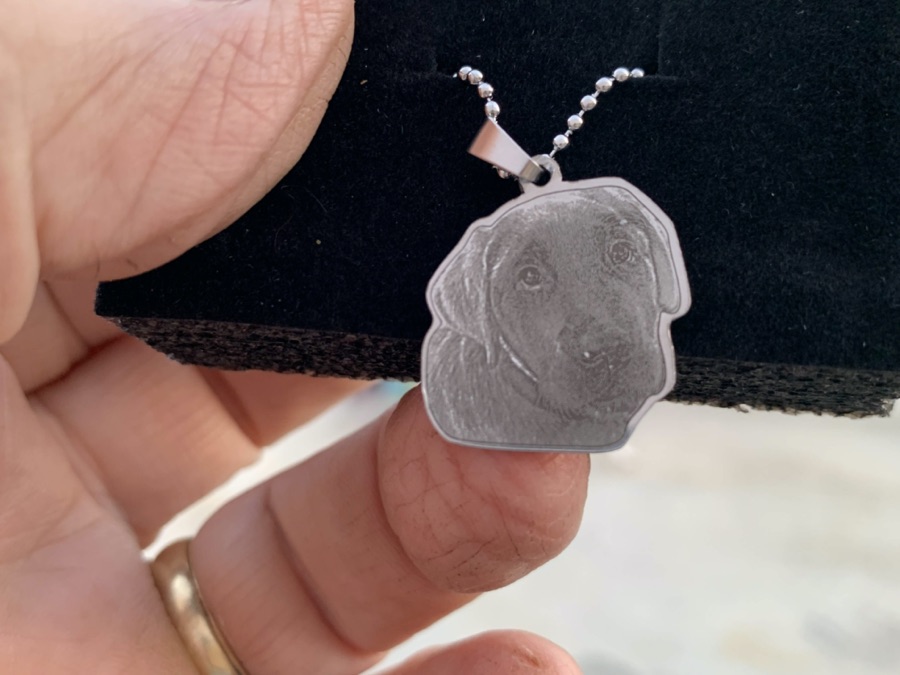 It was a very bright idea!!

We watched the original Spiderman movie tonight, which I hadn’t seen in many many years. Nothing changed, he got bit he gets the girl, and everybody lives happily ever after.

Before the movie, it was time for cake and ice cream. 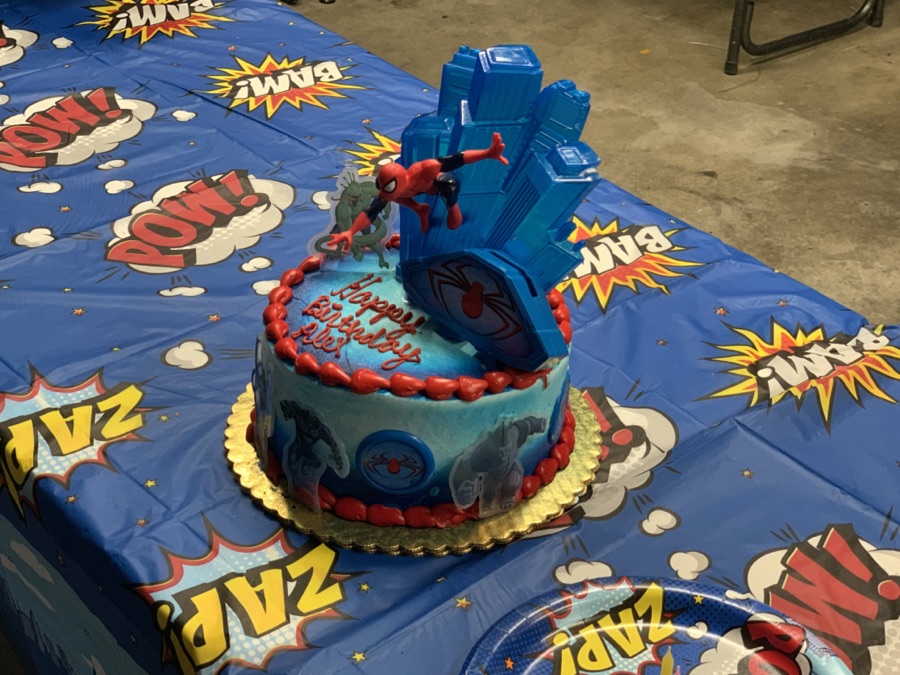 I got control of myself and only had one slice plus three scoops of ice cream!

We sang happy birthday, the police showed up, dogs from blocks around began to howl, and people were blaming the horrible sound on the full-moon that was on the rise tonight! 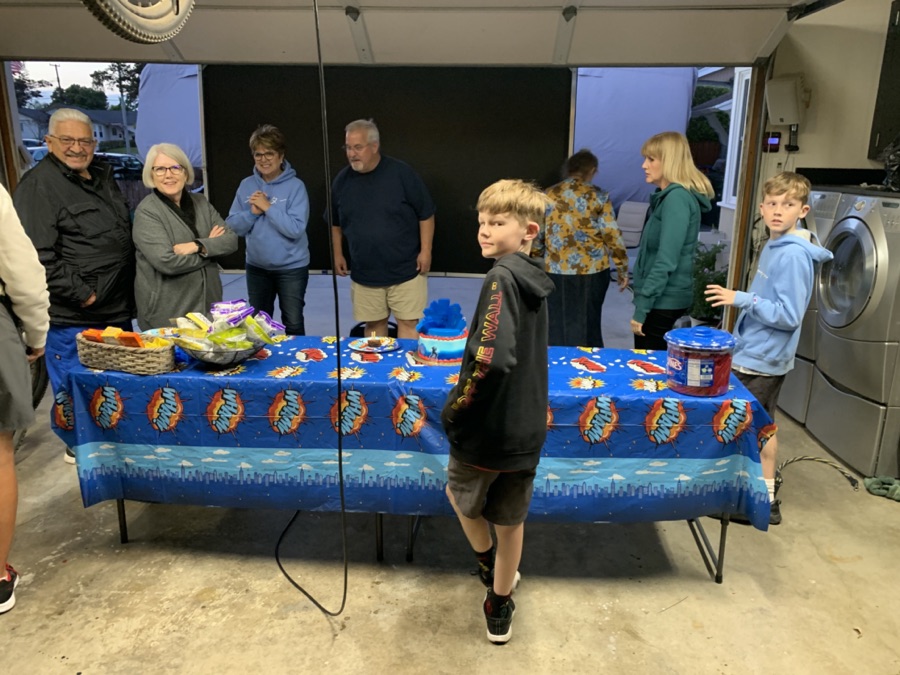 Hurry with the cake; it is time for the movie!!

The screen folded up easily and we were ready to go home.  It was a delightful evening with family and friends. 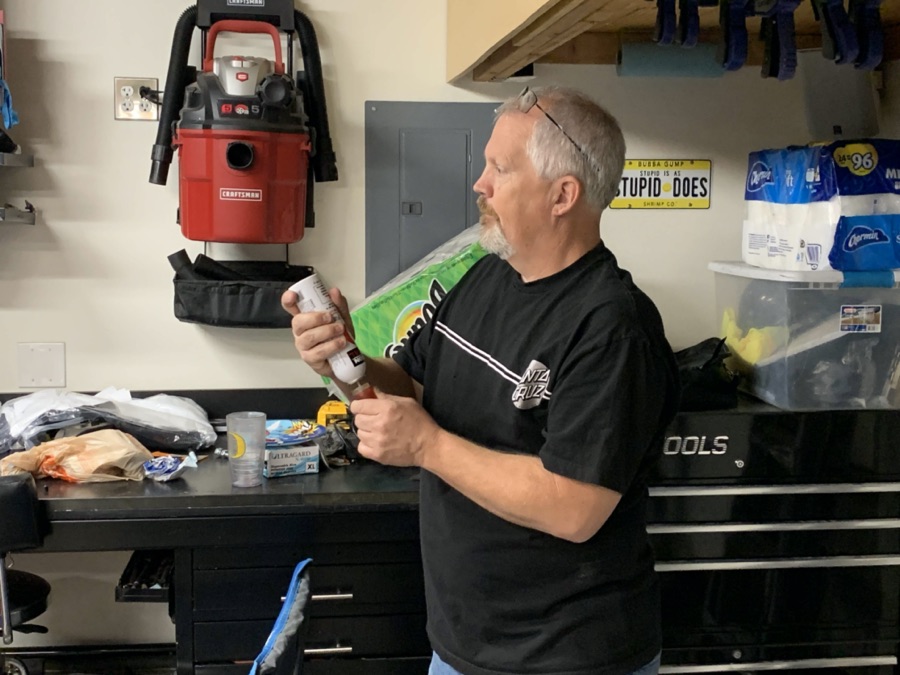 Joe had to recharge the lighter to fire up the candles next time!

The movie was over about 10:30 PM, and we milled around and visited for a while before heading home.  The full moon was up and quite lovely. 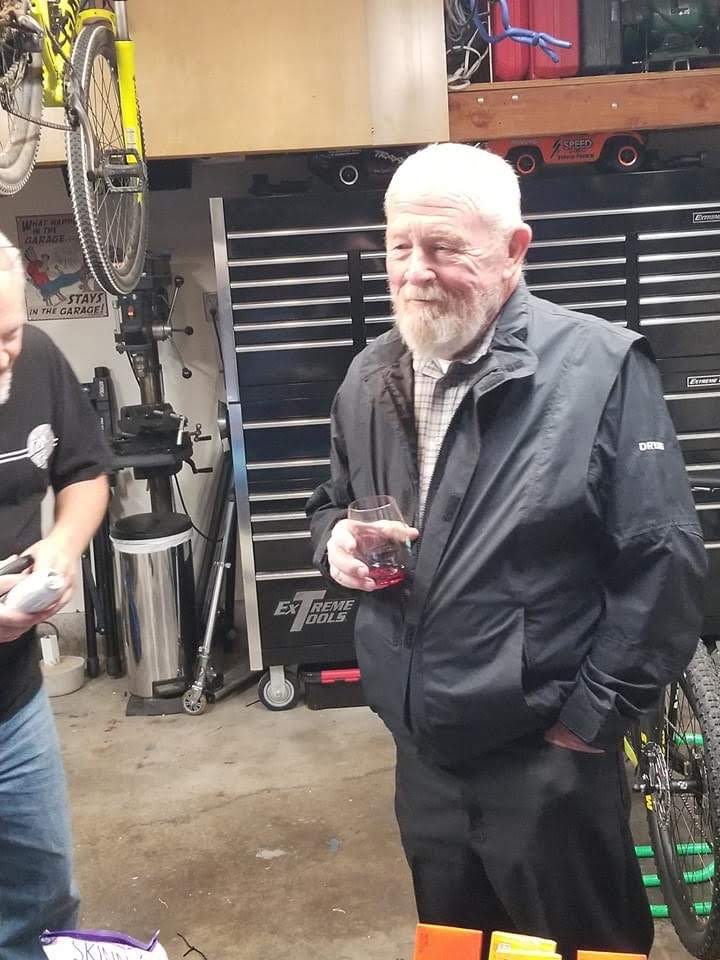 Grandpa at the birthday party. 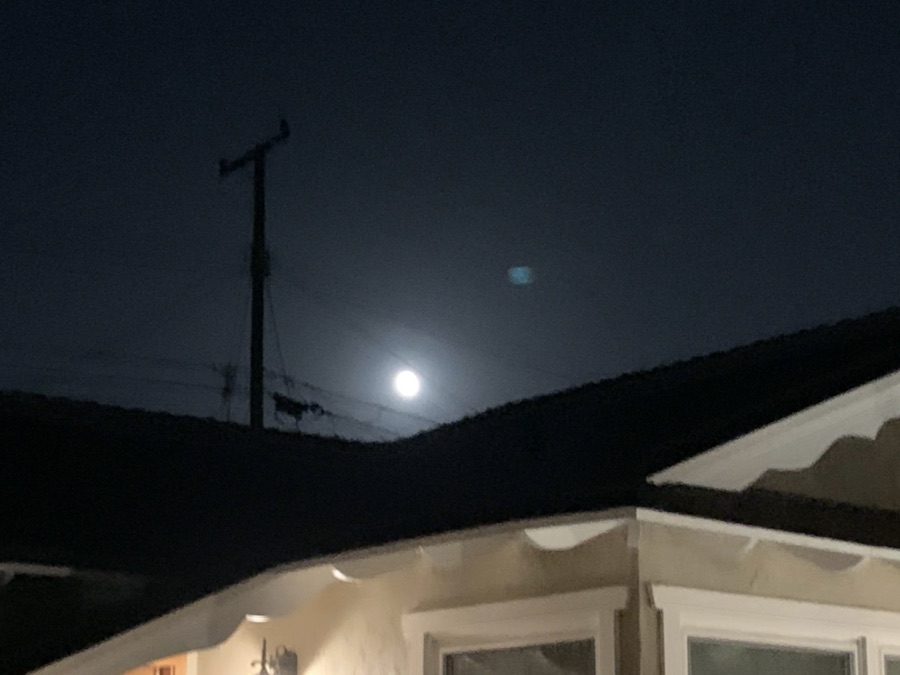 The moon must have caused those horrible sounds which sounded a little like Happy Birthday!

I zipped home arriving at about 11:15 PM, and then I watched a little bit of TV before going night-night.  Sunday is a full day.  Carrie is coming over to pick veggies, Bob is coming at 11:00 AM to finish the concrete demolition, Connor is coming about 2:00 PM to visit and have late-lunch/early-dinner, and I may work on the remaining wiring before crashing!

Just an old retired guy trying to finish out my last years on this planet loving my best friend and wife, having fun, learning, and passing on helpful things to others.
View all posts by Paul →
This entry was posted in Adventures, Family, Gardening, Working Around House. Bookmark the permalink.
Powered by Maribol IMDB Plugin