My Car Is Clean, It Must Be Saturday!

Tears are the silent language of grief. – Voltaire

All loved her, and even on the golf course, she had a routing section that just quacked her up.  Yesterday, playing with Charlotte, I thought of Sue on every tee-box, every fairway, and every green.  I could see her walking up slowly, aiming her firestick, and putting the ball right in the middle of the hole!  I, and the ducks, would all break out in loud applause (or quacks) every time.

Today at the market, I saw the Diet Snapple display and just started crying.  It happens, and people are mostly kind.  A lady asked if I was OK, and I told her what was going on.  She was very sweet.  I miss you terribly, my dearest. 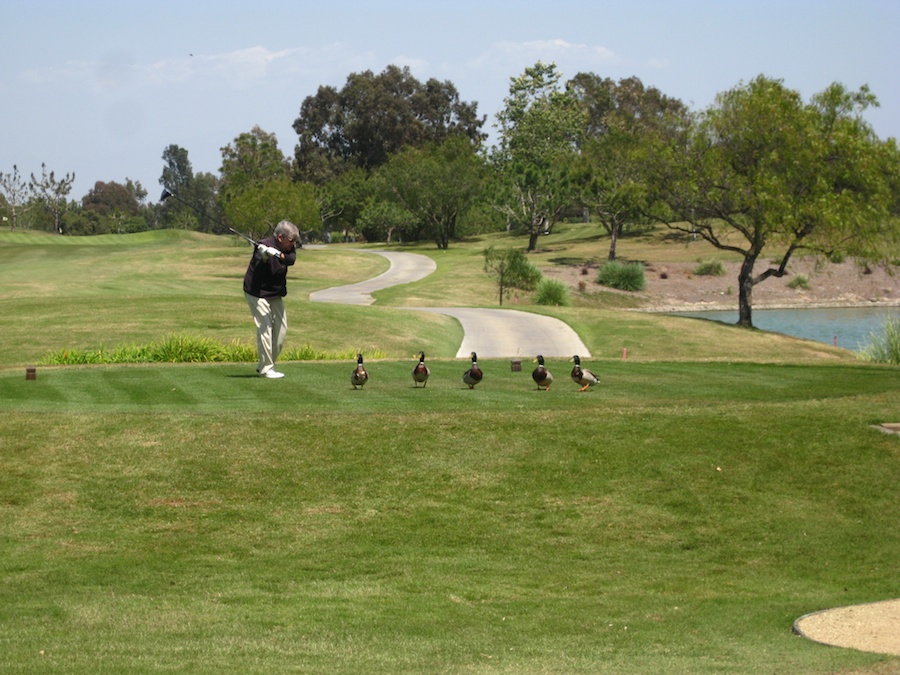 Sue had admirers everywhere she went!

Up at 5:00 AM again, so the first thing I did was call Colleen.  I missed talking to her yesterday.  We chatted for quite a while.   I then wandered outside and became a genuine pea-picker.  My father always called me a “pea-picker” when I was growing up, but until I few up, I was not sure what it meant.  When Dad said it, it was a term of endearment.

Did You Know? A pea-picker is a derogatory reference to poor migrant workers during the Great Depression. These people were unskilled, poorly educated workers, employable only in menial jobs, such as harvesting crops and, as such, received poor wages for working long hours under dreadful conditions. 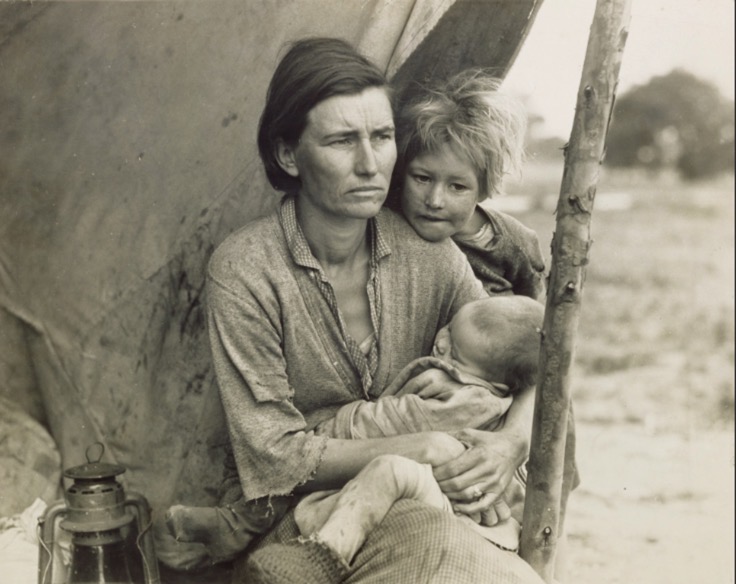 So after a cup of coffee or two and doing some research on redoing bathrooms, my next big project, I turned my attention to lunch!  What are the withdrawal symptoms from hamburgers?  It’s a question I contemplated for all of ten seconds before I reached for my skillet, got out the hamburger patty, and all the fixings!  Burgers and peas for lunch! 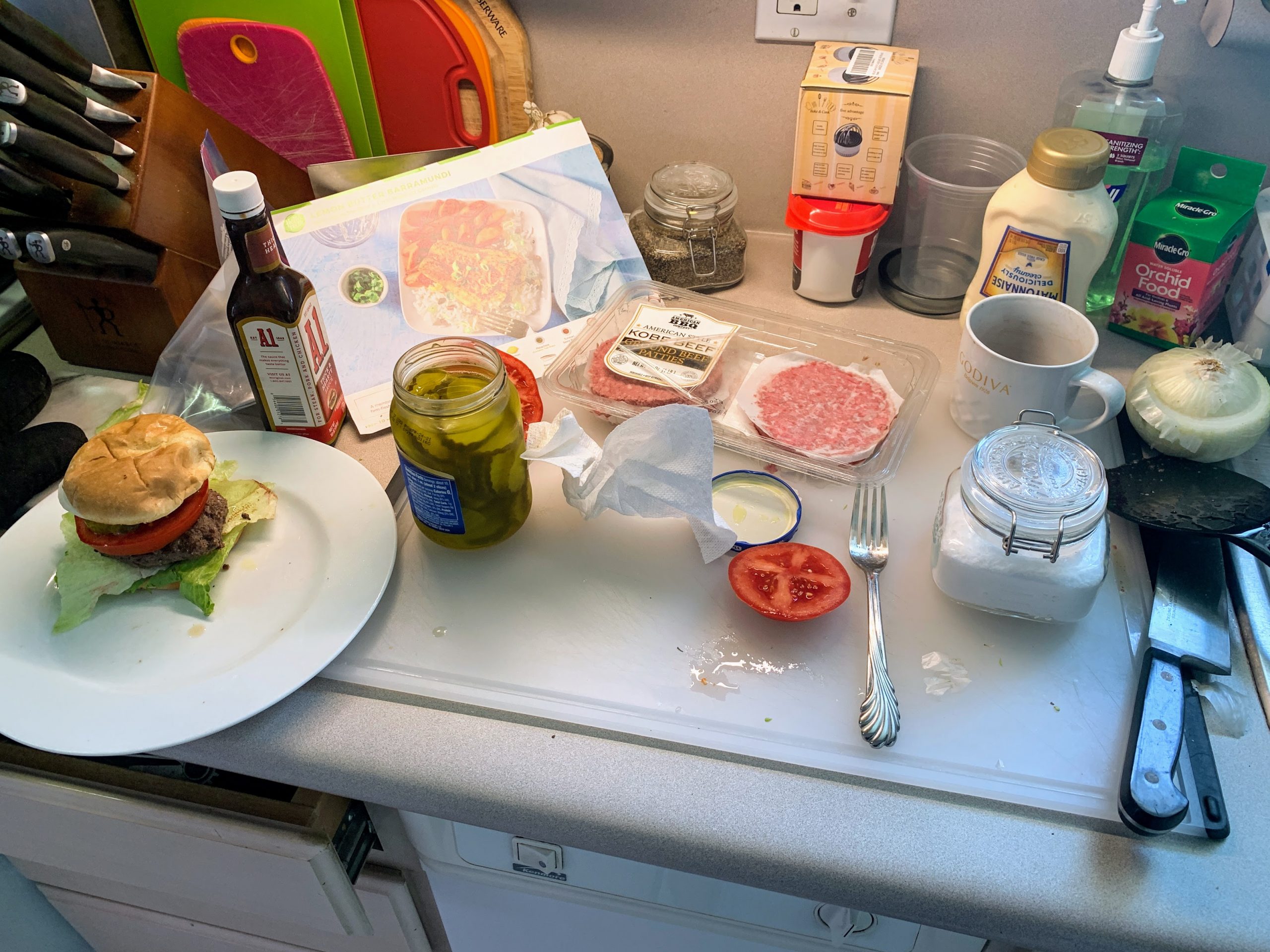 It is a work in progress!

But the final result is what counts! It was so good; I should go into business. The secret is everything fresh and the German mustard. 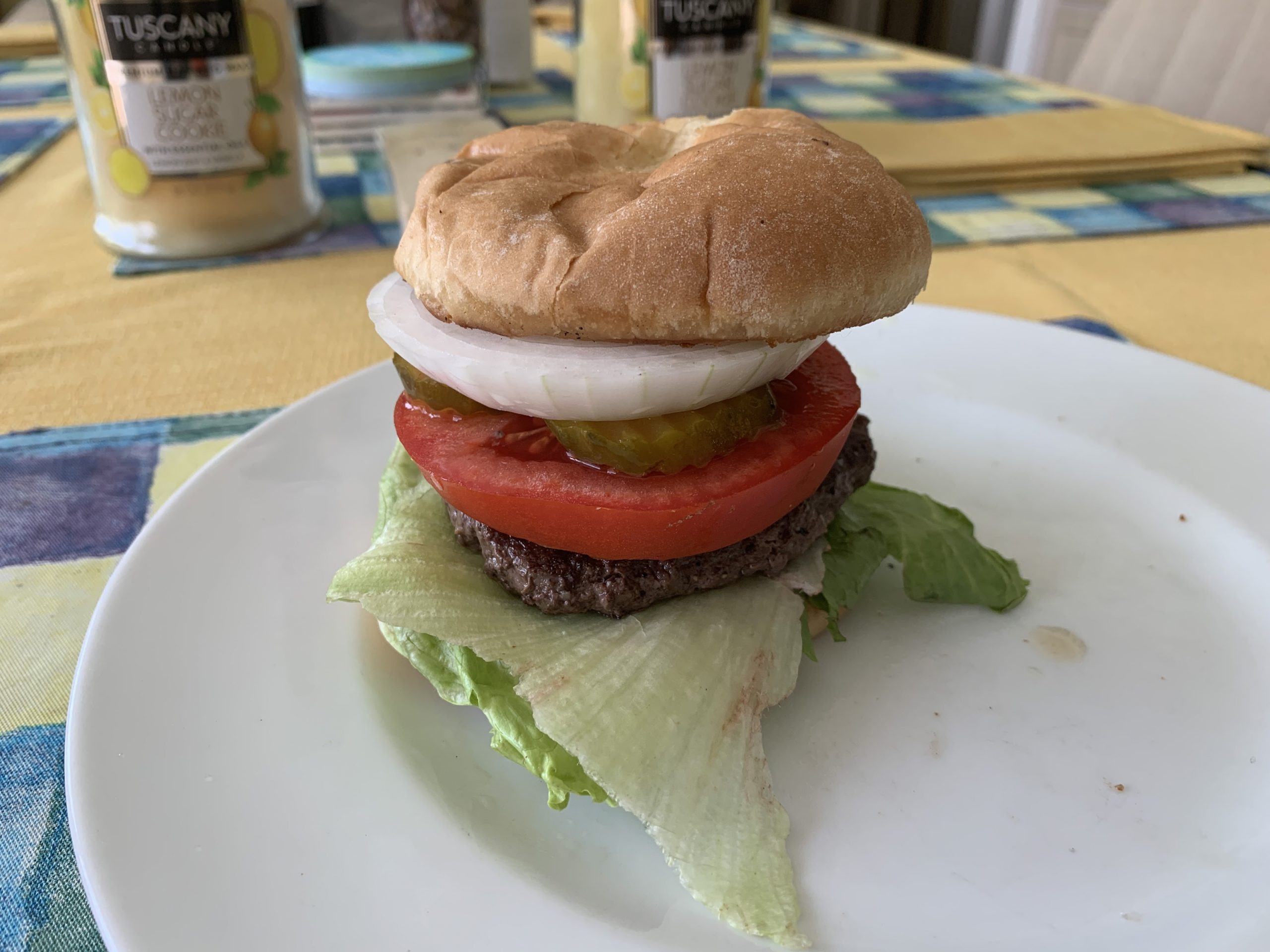 Over the gums and through the tonsils, here it comes… or something like that?!?

Right after brunch, Juan called and was on his way.  He does my cars every two weeks, but this week I had him do Vicky’s car also as the Grey Lady was still under wraps from the last time Juan was here.

Joe called, and I got another invite!  The Silver Ghost and I are heading to La Mirada to watch a movie outside in the driveway with my Son and his family, Amy’s family, and some neighbors. Amy’s parents are fantastic and his neighbors friendly, so it should be fun.  The problem is I need to figure out what to wear since I want to make a good impression on Joe’s neighbors.

It is hot in La Mirada so, I was thinking my sequined jogging shorts, but I do not want to terrify the grandkids.  There is always the full-length black cape, which, during Halloween, has a built-in mask that resembles Bat Man.   Perhaps the giant cockroach costume would be OK, but I am afraid they would know who it is because one of the legs got torn off last year when the neighbor’s Pit Bull chased me down the street.

I know! My Jedi G’Night costume and yes it is G’Night cause it is hot and I get sleepy anytime after the sun goes down. 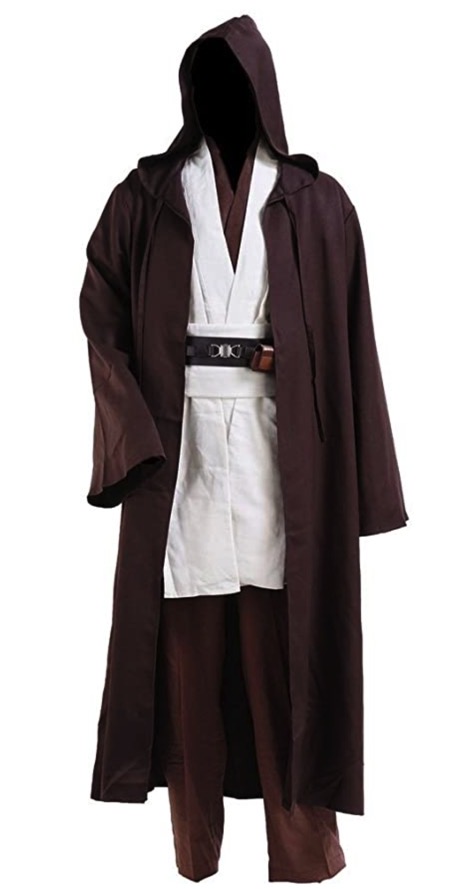 I wonder where my light-saber is? Perhaps just a flashlight?

At 1:00 PM, I decided to call Roger Dunn to see if I could get my golf clubs regripped, and the answer was yes.  I popped down to Seal Beach, dripped off the clubs, and was told I could pick them up Monday afternoon.  BTW, the store will be open for business!

On the way home, I did a quick stop at Ralph’s picking up some necessities of life!  I got a watermelon for the kids next door, a special scrub brush for the cast-iron equipment ( I am using them a lot), and some apples because I plan to make an apple pie and needed some Granny Smith apples!

We took a vote, me, and the bathroom scale!  The bathroom scale won, I must walk another couple of miles today!  So, like a flash, I shot out the door with my streamers waving in the wind behind me.  North was the direction of the day scooting along at a brisk 2.4 miles per hour. I tipped my hat to the folks along my route. 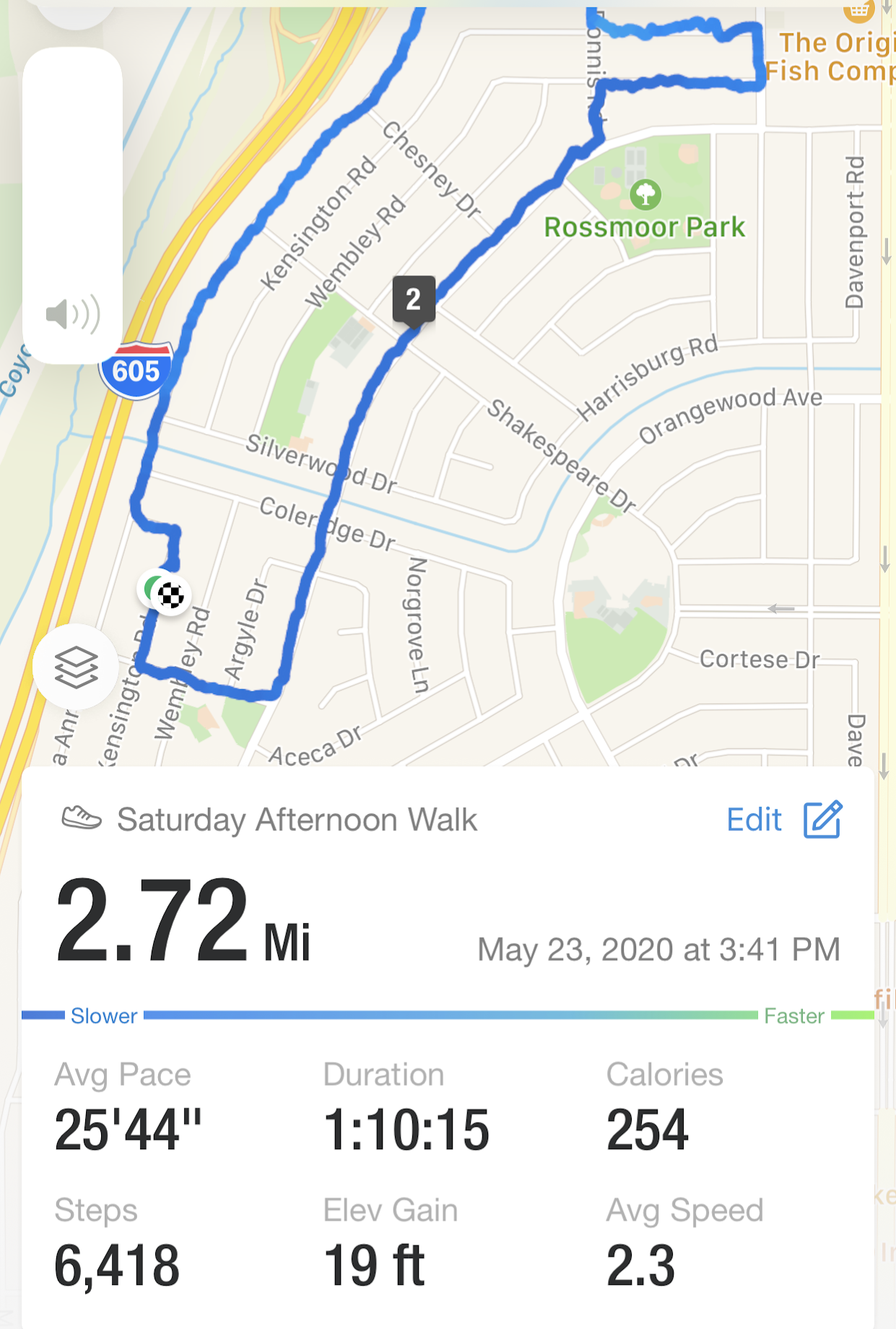 Purple was the color of the day as the local jacaranda trees are wildly blooming and shedding their flowers everywhere!  Jacaranda mimosifolia is a sub-tropical tree native to south-central South America that has been widely planted elsewhere because of its attractive and long-lasting pale indigo flowers. It is also known as jacaranda, blue jacaranda, black poui, or as the fern tree. 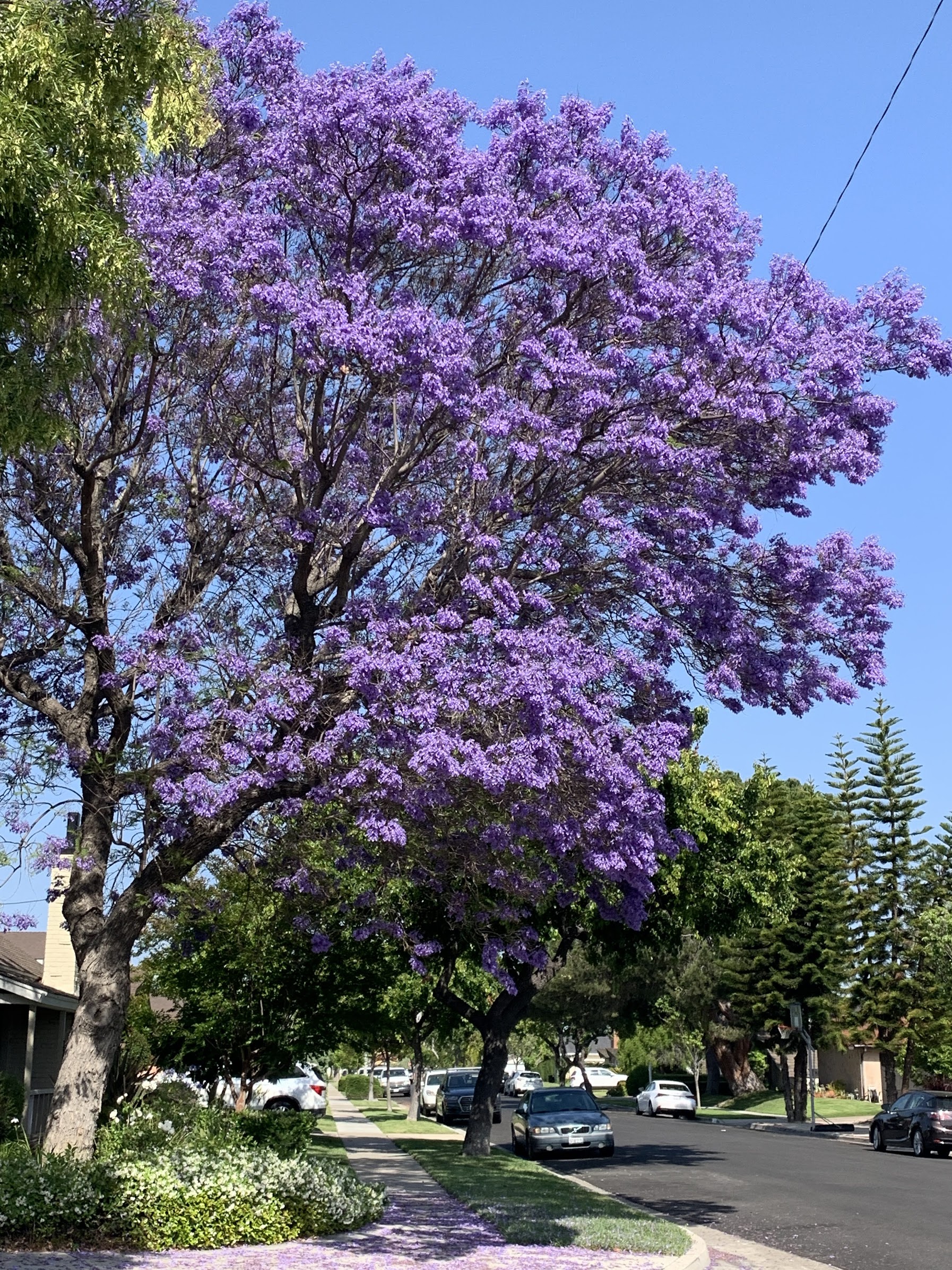 Our neighborhood has quite a few jacaranda trees all blooming at once producing a beautiful tree and a messy sidewalk! 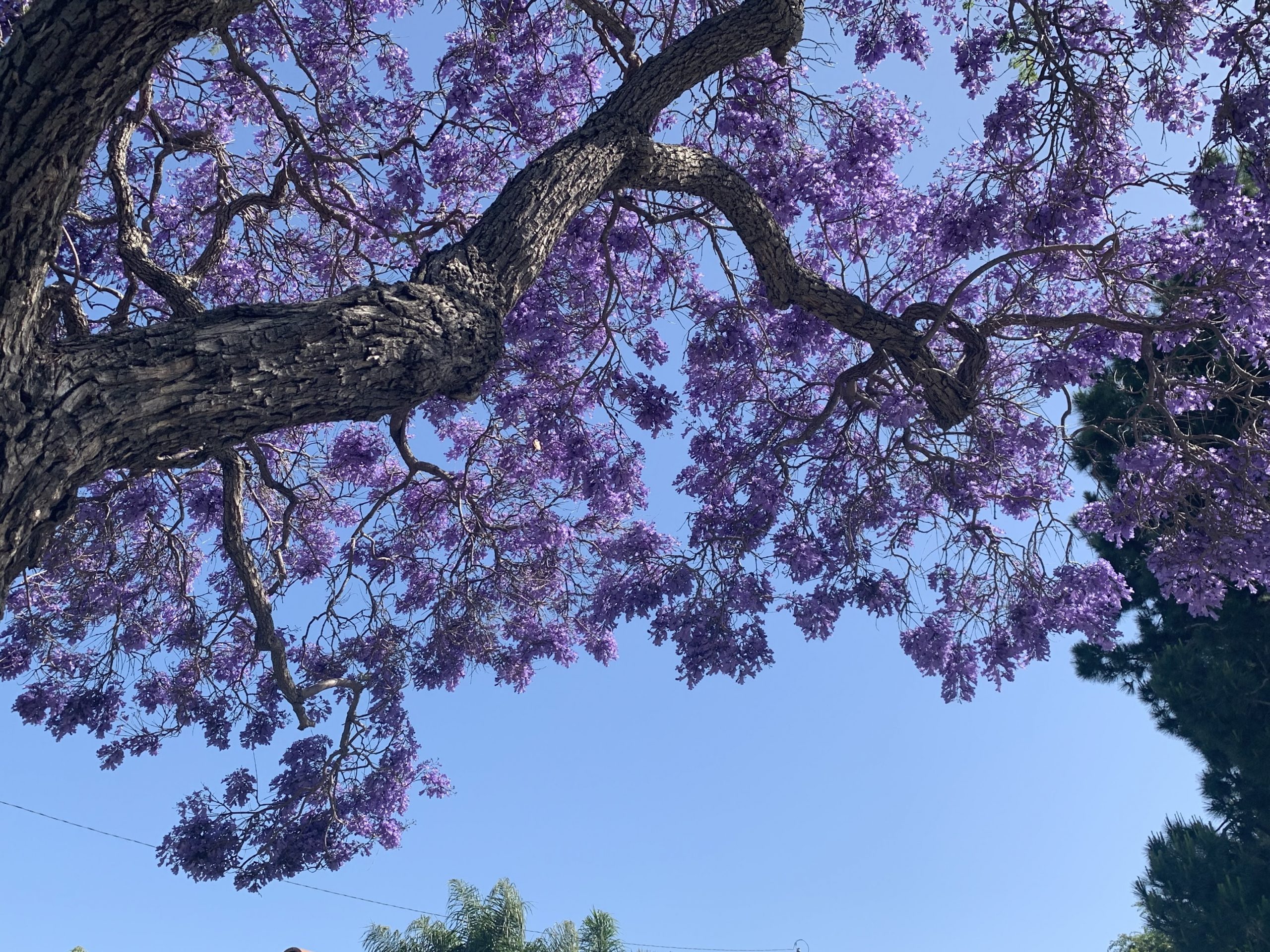 Blue and purple make for an interesting photo.

Off to the movies as the Silver Ghost and I meandered toward La Mirada and joe’s house.  Everyone was there including Amy and her Mom and Dad plus Diane and neighbors from across the street.  We kibitzed until it was dark enough to start the show.  Alex acted as the MC and did a pretty good job!

Lights, camera, action… Let ‘er roll!  “Instant Family” was released in the United States on November 16, 2018. It grossed over $120 million worldwide and was called an “earnest, heartwarming comedy” by critics, who also praised the performances 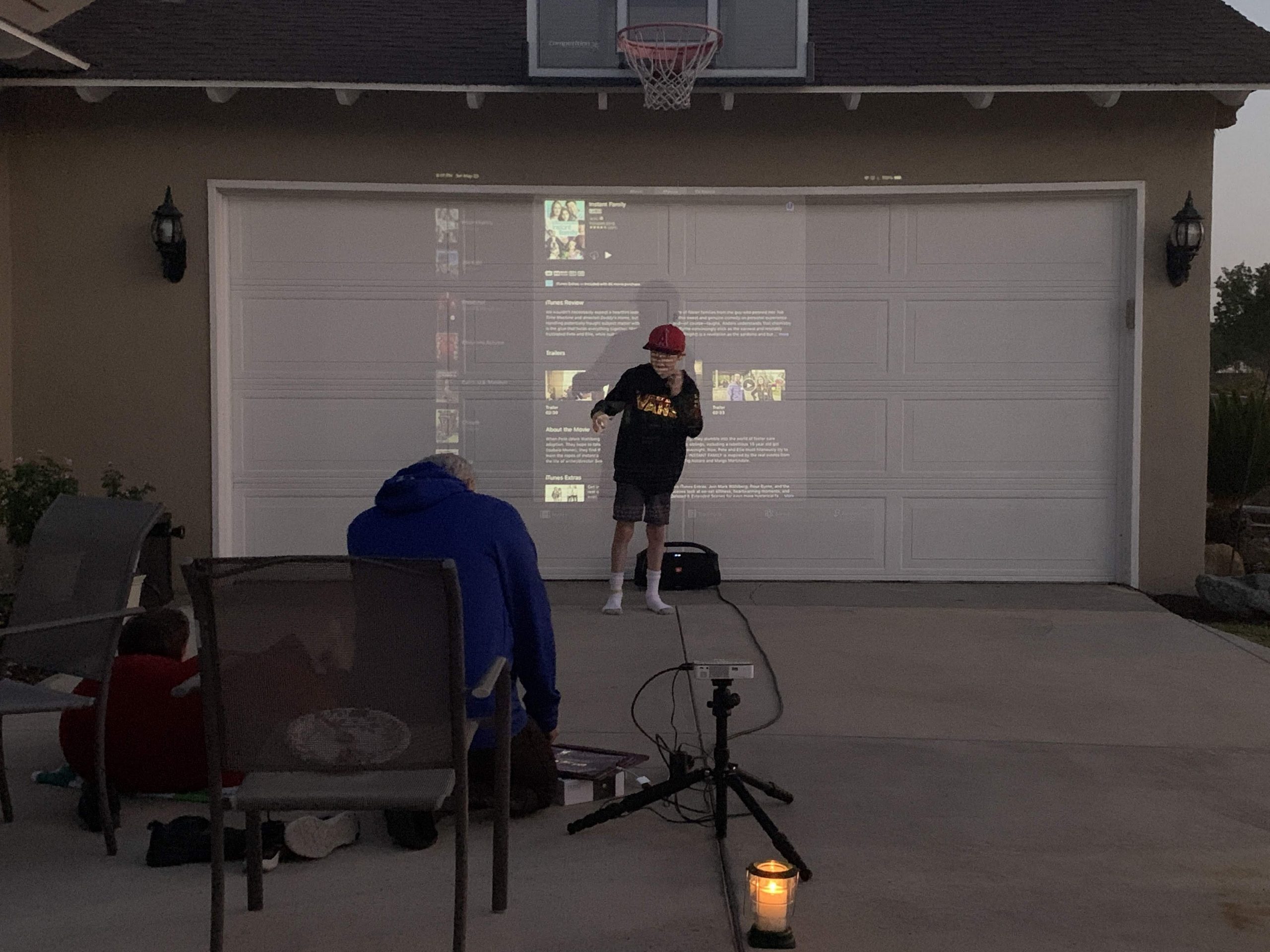 Alex is the newest “ham” in the family!

Everyone had a job including Charlie who collected the trash.  My job, make sure the wine bottle was empty!  Amy, my amazing daughter-in-law, and her mother had strawberry or apple pie for dessert followed by a plate of chocolate chip cookies.  Wine poured freely and we laughed all the way through the movie. 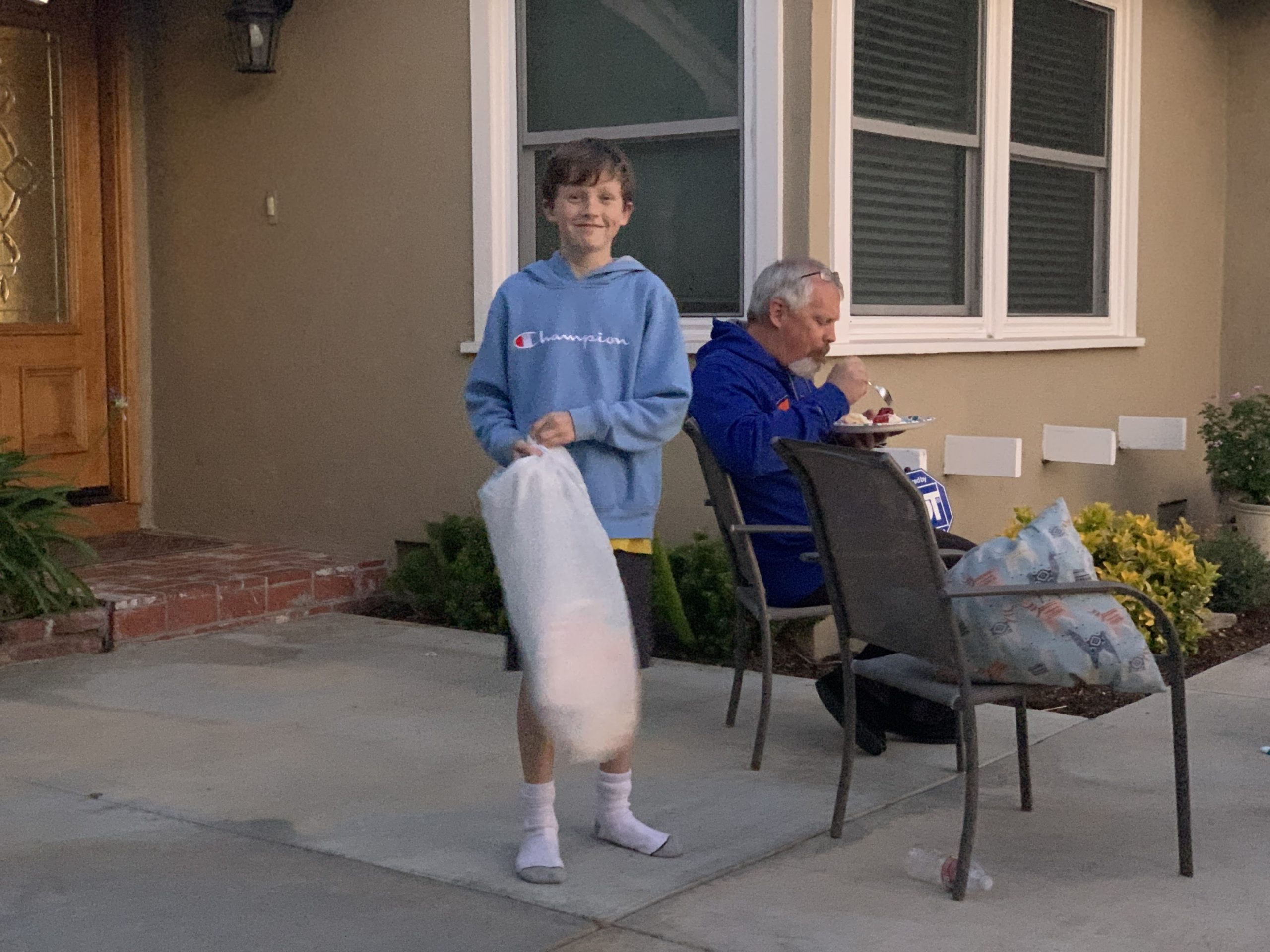 Charlie at work! Joe taking a quick break from turning the crank on the outdoor generator!

The movie was “Instant Family” which was pretty good although the language could have been adjusted!

Just an old retired guy trying to finish out my last years on this planet. I lost my best friend and wife in early 2020. I was blessed again by reconnecting with Dr. Mary Côté, a long-time friend. Mary and I got married July 28th, 2021, and are enjoying life together and plan to spend the rest of our lives being a blessing to our friends and family.
View all posts by Paul →
This entry was posted in Cooking, Family, Movies, Walking. Bookmark the permalink.