My doctor told me to play 36 holes a day, so I went out and bought a harmonica.

Today was a zip… we did some chores in the morning and then off to Old Ranch to meet up with James and do nine holes.  Sue was not quite up to it so she provided “club transportation” for me!

We had a drink afterwards and then headed home!  Great and relaxing day… tomorrow is doctors day!

We watched two movies, one was “Beverly Hills Chihuahua’s II” and the other was “Julia & Julia”.  We had our tookies and crashed about 11:00 PM.

Did You Know?  Julie & Julia is a 2009 American comedy-drama film written and directed by Nora Ephron starring Meryl Streep, Amy Adams, Stanley Tucci, and Chris Messina. The film contrasts the life of chef Julia Child in the early years of her culinary career with the life of young New Yorker Julie Powell, who aspires to cook all 524 recipes in Child’s cookbook in 365 days, a challenge she described on her popular blog that made her a published author.[2]

Ephron’s screenplay is adapted from two books: My Life in France, Child’s autobiography written with Alex Prud’homme, and a memoir by Powell, Julie & Julia: 365 Days, 524 Recipes, 1 Tiny Apartment Kitchen (later retitled Julie & Julia: My Year of Cooking Dangerously). Both of these books were written and published in the same time frame (2004–06). Powell’s book was based on her blog The Julie/Julia Project,[3] where she had started documenting online her daily experiences cooking each of the 524 recipes in Child’s Mastering the Art of French Cooking. The film is the first major motion picture based on a blog.

In March 2008, Ephron began filming with Streep as Child and Adams as Powell. On July 30, 2009, the film officially premiered at the Ziegfeld Theatre in New York; and, on August 7, 2009, it opened throughout North America. 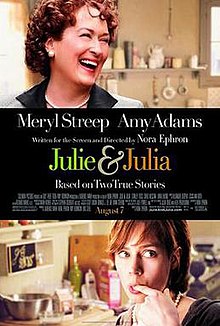 Just an old retired guy trying to finish out my last years on this planet loving my best friend and wife, having fun, learning, and passing on helpful things to others.
View all posts by Paul →
This entry was posted in Movies and tagged Golf, Old Ranch. Bookmark the permalink.
Powered by Maribol IMDB Plugin