A Visit With The Rat Pack

We are off to the OC Performing Arts Center for a visit with the Rat Pack! 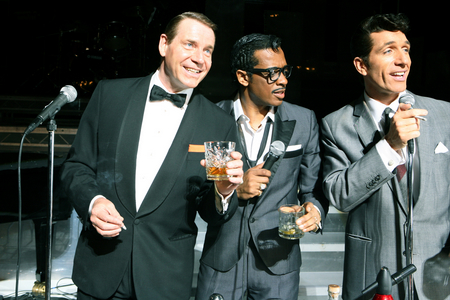 These Guys Were Terrific!!!

The Rat Pack was a group of popular entertainers originally centered on Humphrey Bogart. In the mid-1960s it was the name used by the press and the general public to refer to a group that called itself “the summit” or “the clan,” featuring Frank Sinatra, Dean Martin, Sammy Davis, Jr., Peter Lawford and Joey Bishop, who appeared together on stage and in films in the early-1960s, including the movie Ocean’s Eleven.  Despite its reputation as a masculine group, the Rat Pack did have female participants, including movie icons Shirley MacLaine, Lauren Bacall, Angie Dickinson, Marilyn Monroe, and Judy Garland.

THE RAT PACK – Live at the Sands is the hottest and coolest party in town. Following four unprecedented years on London’s West End, this acclaimed production vividly recreates a legendary evening at the Sands Hotel with the most famous performers of our time: Frank Sinatra, Sammy Davis, Jr. and Dean Martin. It’s Las Vegas, it’s the Sands Hotel, the big band is swingin’, and those gorgeous Burelli Sisters are singin’, and of course the three wisecracking hip-cats bring their inimitable magic to the finest music ever recorded: ‘I’ve Got You Under My Skin’; ‘That’s Amore’; ‘Mr. Bojangles’; ‘The Lady Is A Tramp.’ You won’t find anything like it anywhere else. It’s the Rat Pack – and it’s live! Ring-a-ding-ding!

Just an old retired guy trying to finish out my last years on this planet loving my best friend and wife, having fun, learning, and passing on helpful things to others.
View all posts by Paul →
This entry was posted in Fun, Holidays and tagged Plays. Bookmark the permalink.
Powered by Maribol IMDB Plugin