A tea dance, or thé dansant (French: literally dancing tea) is a summer or autumn afternoon or early-evening dance from four to seven, sometimes preceded in the English countryside by a garden party.  The function evolved from the concept of the afternoon tea, and J. Pettigrew traces its origin to the French colonization of Morocco.

Books on Victorian Era etiquette such as Party-giving on Every Scale (London, n.d. [1880]), included detailed instructions for hosting such gatherings. By 1880 it was noted “Afternoon dances are seldom given in London, but are a popular form of entertainment in the suburbs, in garrison-towns, watering-places, etc.”  Tea dances were given by Royal Navy officers aboard ships at various naval stations, the expenses shared by the captain and officers, as they were shared by colonels and officers at barrack dances in mess rooms ashore.

The usual refreshments in 1880 were tea and coffee, ices, champagne-cup and claret-cup, fruit, sandwiches, cake and biscuits.  Even after the introduction of the phonograph the expected feature was a live orchestra – often referred to as a palm court orchestra – or a small band playing light classical music. The types of dances performed during tea dances included Waltzes, Tangos and, by the late 1920s, The Charleston. 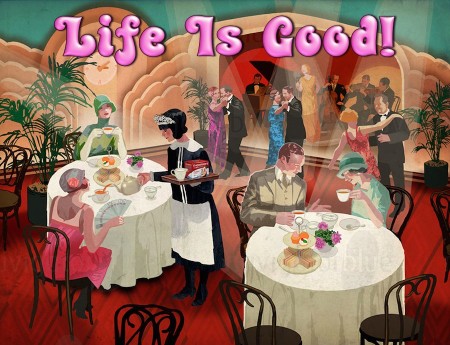 Just an old retired guy trying to finish out my last years on this planet. I lost my best friend and wife in early 2020. I was blessed again by reconnecting with Dr. Mary Côté, a long-time friend. Mary and I got married July 28th, 2021, and are enjoying life together and plan to spend the rest of our lives being a blessing to our friends and family.
View all posts by Paul →
This entry was posted in Dancing, Food and Wine, Friends, Fun and tagged Big Bands, Dancing, Friends, Wine. Bookmark the permalink.