Socrates learned to dance when he was seventy because he felt that an essential part of himself had been neglected. ~Source Unknown

We played eighteen with James and it was an OK day… It did get a little cool towards the end of the game.  Sue found her geese on hole number ten and visited with them for a few minutes.  They recognize Sue and walked right up to her!

Did You Know? While many people only hear the trademark “honk” when geese make noise, there is evidence that Canada geese can communicate with different sounds. Scientists believe that there are as many as 13 different Canadian goose calls for things like greetings, warnings and contentment.  (Sue knows at least five of them and is practicing talking back!)

Canadian geese may be one of the most talkative animals after humans. Goslings, or baby geese, begin communicating with their parents while still in the egg! Once hatched, there is also evidence that they respond differently to different calls and noises from their parents, indicating a sophisticated level of communication. 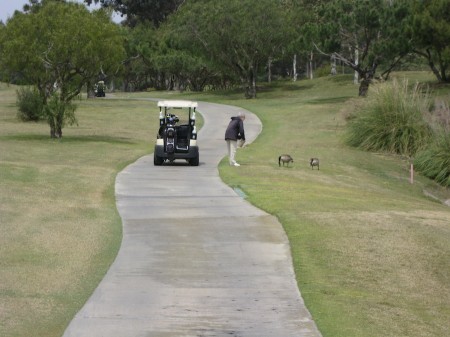 After a Happy Hour, we headed for the Phoenix Club to dance.  So Paul asked for the Bunny Hop and of course had to lead it.  Many of the people in the line had never done it before.  Than goodness it was easy to do!

Did You Know? The bunny hop is a novelty dance that was created at Balboa High School in San Francisco in 1952.[1] It is a social mixer dance, sometimes also referred to as a “party” or “dance party” dance. 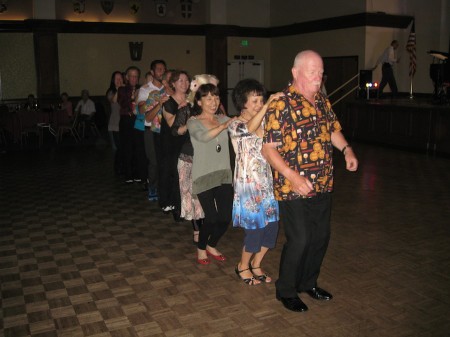 The gooses get their afternoon snack!

We thought the leader should look like a rabbit so naturally he needed ears!  It was fun! 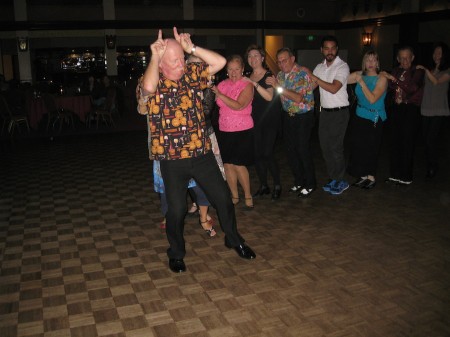 We headed for home around 10:30 and checked our email before crashing!  This weekend is going to be busy!

Just an old retired guy trying to finish out my last years on this planet loving my best friend and wife, having fun, learning, and passing on helpful things to others.
View all posts by Paul →
This entry was posted in Dancing, Friends and tagged Friends, Golf, Old Ranch, Phoenix Club, Wine. Bookmark the permalink.
Powered by Maribol IMDB Plugin