Moments To Remember At Cerritos Center For The Performing Arts 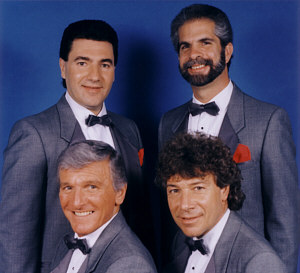 A newspaper editor recently posed the query “define old.” I would say that if you remember pop music before Elvis you have some miles on the odometer but that only makes you wiser and not old. Fred Diodati, lead singer of the featured “Four Aces” who headlined the “Moments to Remember” matinee at the Performing Arts Center on Sunday says that old is only an unnecessary state of mind. This, coming from a gentleman who has been married for 56 years and has been the front man for this group since 1956. Fred and the Four Aces hauled out the chestnuts from way back at this show much to the joy of the packed house who were old enough to remember them and young enough to get down to Center drive. Sweet songs like “Three Coins in a Fountain,” “Mister Sandman,” “Amor” and the classic “Love Is a Many Splendored Thing” warmed the huge assemblage and took everyone back to simpler times and melodies that filled our homes in the days of vinyl and easy money. This might be as my friend calls it “Cruise Ship” music but the Aces do it up right and add that air of authenticity of half a century of performing these great old tunes. There were more dandies including “Perfidia,” “Should I,” “Shangri-La” and a perfectly lovely “Dream” that were exactly suited to the tight four part harmony of the group. This kind of music formed the bridge between Big Band swing and Rock and Roll for a good reason, it just sounds cool to hear in person.
The show was opened by the “Four Lads” who are a few miles away from lad-dom but can still sing their memorable songs with a seamless harmony and style not seen in contemporary music. Lead by bass singer Connie Codarini the quartet put nice touches to “Istanbul,” “Cry,” “Standing on the Corner” “No Not Much” and the wonderfully evocative “These Moments to Remember” that really made you think about when you might have heard the songs first. They also did a lengthy salute/melody to Irving Berlin that was amazing in the sheer numbers of classic tunes the composer contributed to the great American songbook.
In between the Lads and Aces were the Diamonds who offered a much more flamboyant and energetic set punctuated by lots of clowning and theatrics. Theirs was a performance that reached right into the Rock and Roll era with some genuine Oldies but Goodies especially “Those Oldies But Goodies,” “Rock and Roll Is Here to Stay,” “Only You,” “At the Hop,” and “Splish Splash” aided by sax and choreography. They also proved adept at the doo wop or plain pop like “Blue Moon,” a perfect “Church Bells,” “the Stroll” and even a fine version of the Beach Boys song “In My Room.”
The full dozen singers came out for a grand finale of “United We Stand” that got the audience to stand and applaud long and loud for these heroes of yesteryear back here again.

Just an old retired guy trying to finish out my last years on this planet loving my best friend and wife, having fun, learning, and passing on helpful things to others.
View all posts by Paul →
This entry was posted in Fun and tagged CCPA. Bookmark the permalink.
Powered by Maribol IMDB Plugin