We spent the morning and afternoon doing our chores… Working around the house!  In the afternoon we relaxed for a bit before going to the Nightlighters Dance Club.  Please join the fun! 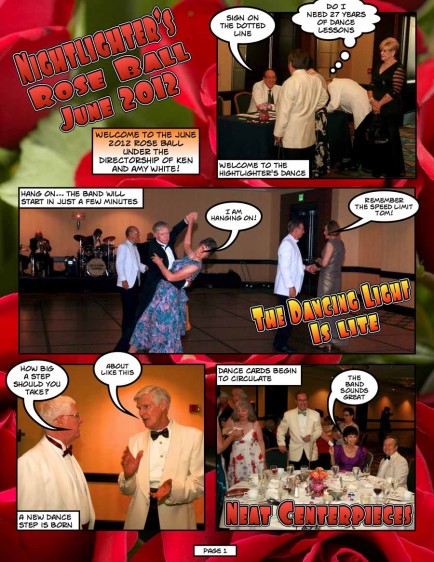 Fun at the Rose Ball

I changed my iPod name to Titanic. It’s syncing now.

When chemists die, they barium.

Jokes about German sausage are the wurst.

A soldier who survived mustard gas and pepper spray is a seasoned veteran.

I know a guy who’s addicted to brake fluid. He says he can stop any time.

How does Moses make his tea? Hebrews it.

I stayed up all night to see where the sun went. Than it dawned on me.

This girl said she recognized me from the vegetarian club, but I’d never met herbivore.

I’m reading a book about anti-gravity. I can’t put it down.

I did a theatrical performance about puns. It was a play on words.

They told me I had type A blood, but it was a Type- O.

A dyslexic man walks into a bra. .

Why were the Indians here first? They had reservations.

Class trip to the Coca-Cola factory. I hope there’s no pop quiz.

I didn’t like my beard at first. Then it grew on me.

How do you make holy water? Boil the hell out of it!

Did you hear about the cross eyed teacher who lost her job because she couldn’t control her pupils?

When you get a bladder infection, urine trouble.

What does a clock do when it’s hungry? It goes back four seconds.

I wondered why the baseball was getting bigger. Then it hit me!

I tried to catch some fog. I mist.

What do you call a dinosaur with an extensive vocabulary? …..A thesaurus.

I do not enjoy computer jokes. Not one bit!

England has no kidney bank, but it does have a Liverpool.

I used to be a banker, but then I lost interest.

I dropped out of communism class because of l ousy Marx.

All the toilets in New York’s police stations have been stolen. Police have nothing to go on.

I got a job at a bakery because I kneaded dough.

Haunted French pancakes give me the crepes.

Velcro – what a rip off!

I used to think I was indecisive, but now I’m not so sure.

Just an old retired guy trying to finish out my last years on this planet loving my best friend and wife, having fun, learning, and passing on helpful things to others.
View all posts by Paul →
This entry was posted in Dancing, Food and Wine, Friends and tagged Dance Club, Dancing, Nightlighters. Bookmark the permalink.
Powered by Maribol IMDB Plugin