A Wee Bit Of Scotch Please!

The alarm went off at 5:00 AM; we think Scout set it to get back at us for leaving him alone last night!  Morning is terrific, and its only drawback is that it comes at such an inconvenient time of day.

I wake up every morning at six and grab the morning paper.  Then I look at the obituary, and if my name is not on it, I get up. 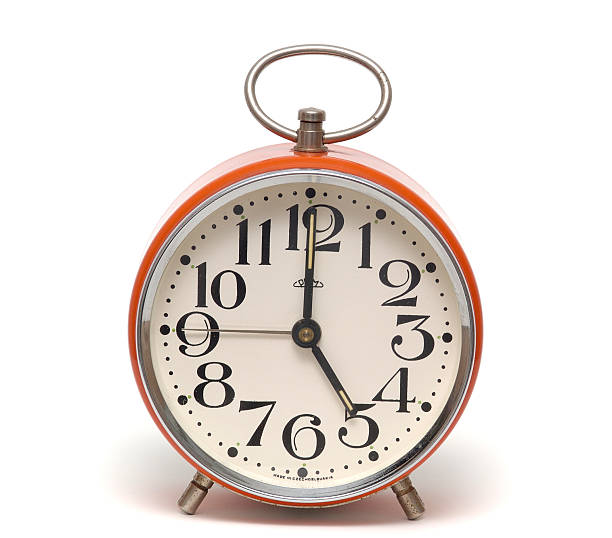 We headed to the Swim Spa at 6:00 AM, bringing our coffee with us, and we sat in the mist and watched the birds fly over, scouting the hood to decide where they wanted to land.

Robin, Bob, and Nick joined us at 9:30 AM, and we drove to the OC Fairgrounds to attend the Scottish Festival.  Scottish Fest, held at the OC Fair & Event Center, is the oldest and longest-running event of its kind in Southern California.  The two-day festival is put on each Memorial Day weekend by the United Scottish Society to celebrate the Scottish heritage and tradition.  It dates back to 1932 as a small gathering called the Highland Games but has grown to cover nearly all 150 acres of the OC Fair & Event Center in Costa Mesa. The music was, ah, interesting!

Mary was curious about the kilt.  I always attempt to enlighten Dr. Mary using my years of adulthood and my obvious seniority.

Get ready!  So, Mary asked me, how many birds can you fit under a Scotsman’s kilt?  In a delicate tone of voice, I replied, “Depends how big the perch is!”. 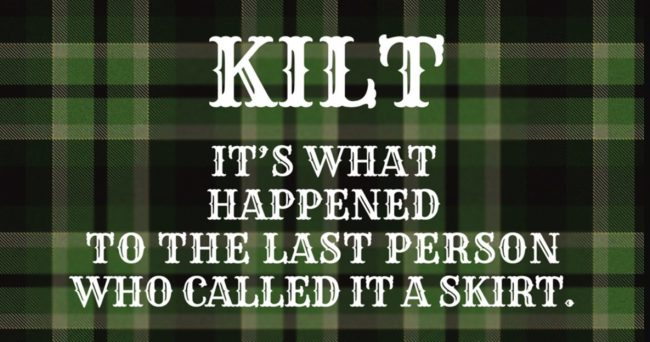 Mary would not let me buy her an official “Kilt Inspector T-Shirt.”

We stopped and enjoyed the sheep herding demonstration.  Scout would have gone nuts as he has the instincts to be a herder!  He often will “guide” us to where he wants to go by rubbing up against us as we walk! 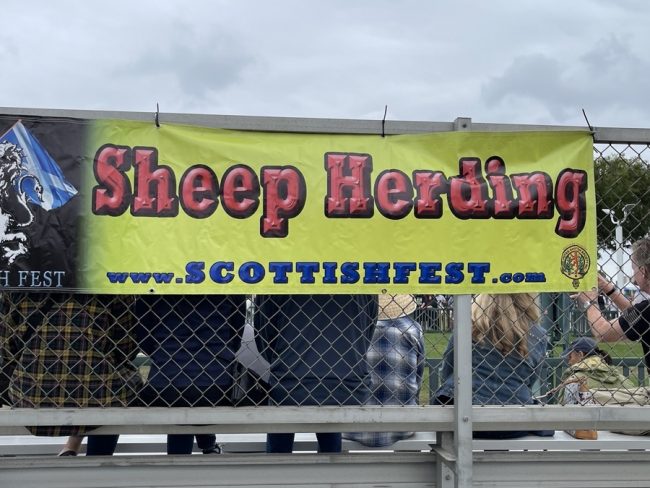 We watched with great interest.

The top dog was “Tweed,” and he was terrific.  He circled those sheep, and they did not move!  He was in total control!  A herding dog, also known as a stock dog, shepherd dog, sheepdog, or working dog, is a type of dog that has been trained in herding or belongs to breeds developed for herding. 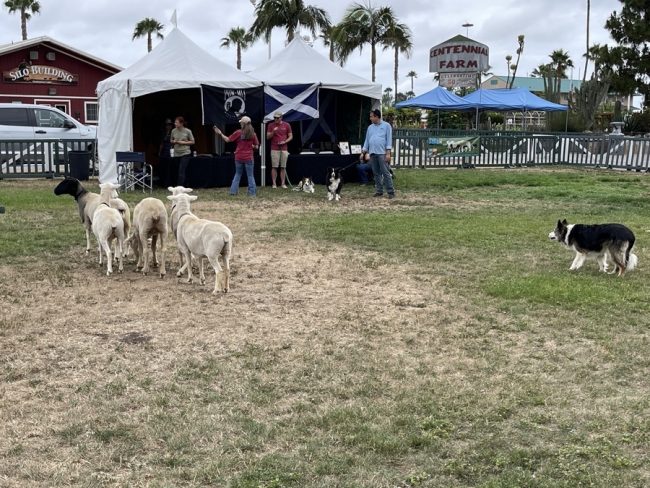 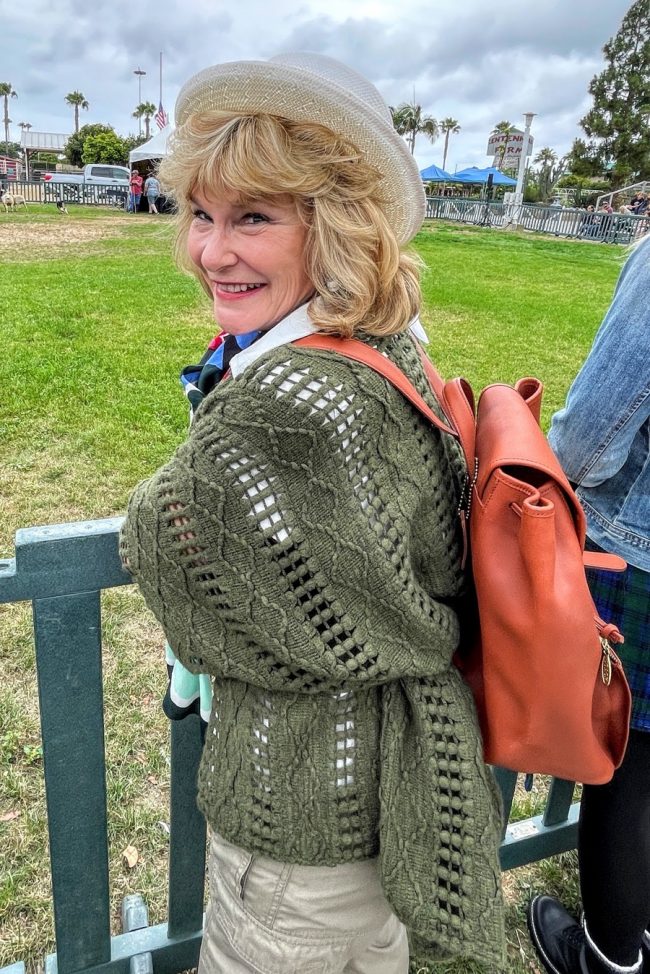 Scout is in trouble when we get home.

We may have to buy three or four sheep for Scout to boss around! 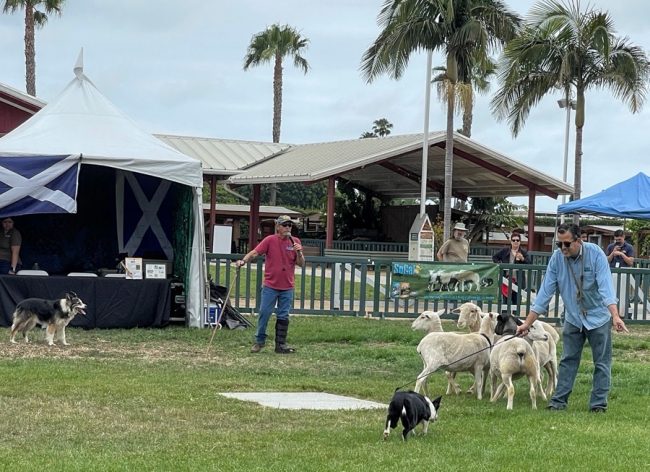 The demonstration was fantastic!

We walked all around the grounds and even stopped to see the hammer throw and girls tossing 50-pound rocks thirty feet!  Mary got a new ring that looks like “The King Of Frogs,” and Robin and Bob got a new coat of arms.

When the bagpipes play, Mary moves! 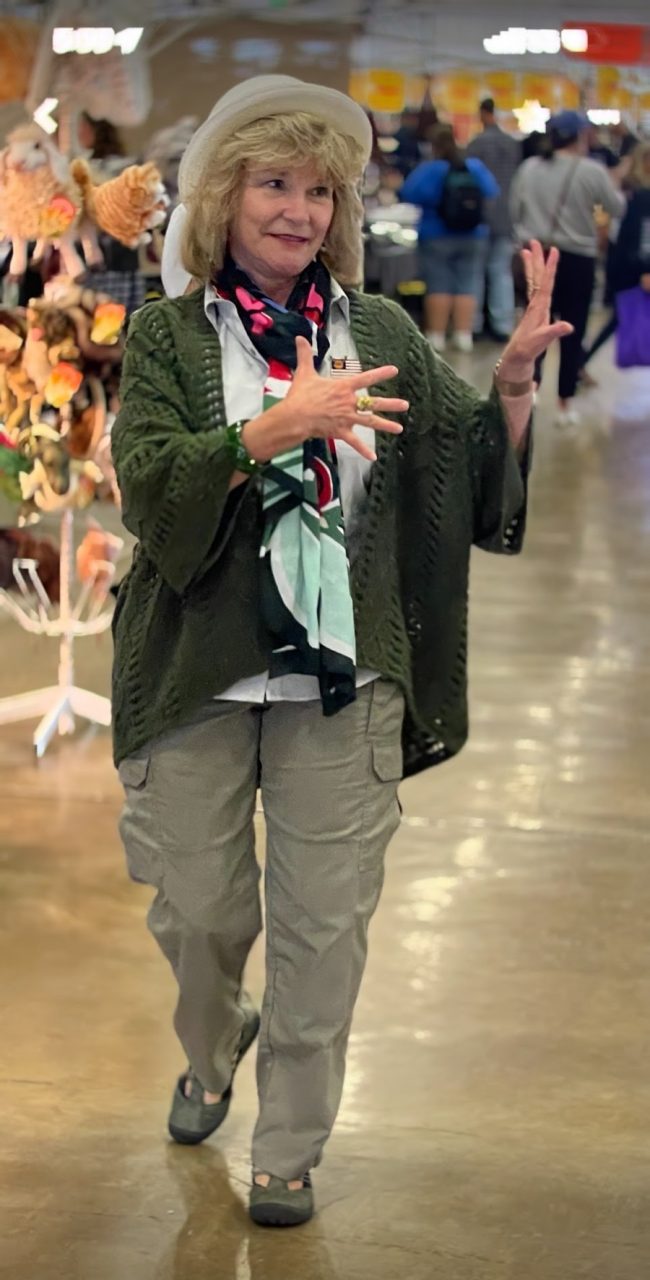 The bagpipes got to her.

We could have stayed all day, but my leg said, “Time to go home!”.  But first, we needed authentic Scottish food, so we stopped at the Baja Blue restaurant and had hamburgers and Mexican food!

I suggested having haggis but was outvoted 4:1.

Did You Know?  Haggis (Scottish Gaelic: taigeis) is a savory pudding containing sheep’s pluck (heart, liver, and lungs), minced with onion, oatmeal, suet, spices, and salt, mixed with stock, and cooked while traditionally encased in the animal’s stomach though now an artificial casing is often used instead.  According to the 2001 English edition of the Larousse Gastronomique: “Although its description is not immediately appealing, haggis has an excellent nutty texture and delicious savory flavor.” 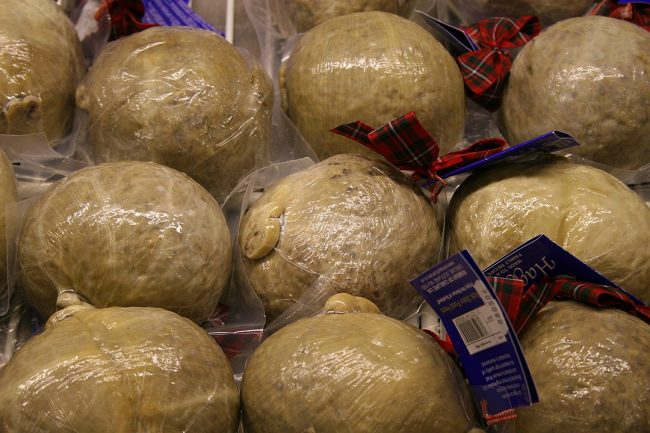 The wine area of the fair was converted to a whiskey tasting area; it was too early for me to try them! 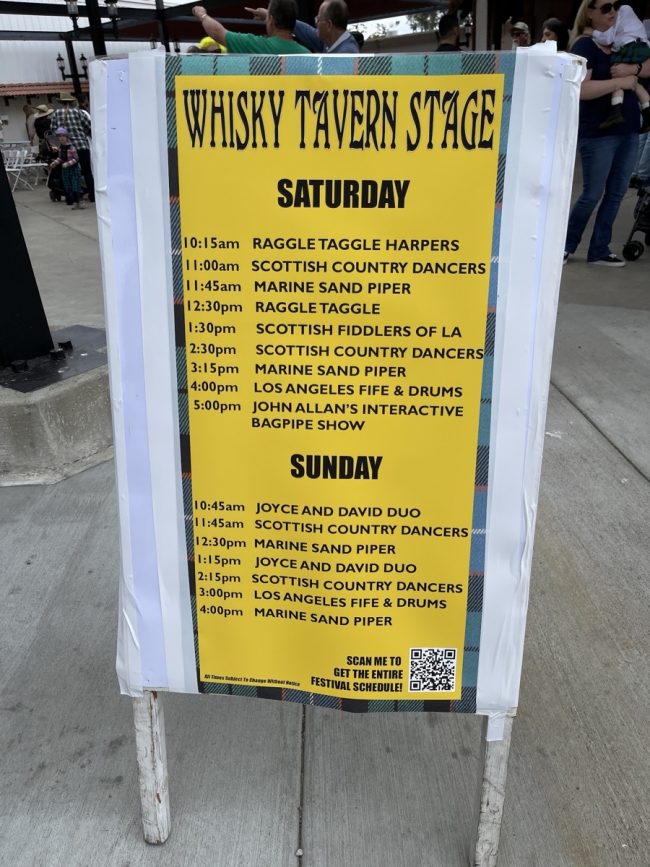 Activities we planned for the entire day!

There was no “Liles” in the family names, probably because I was Irish.  No Côté’s either; the French, you know! 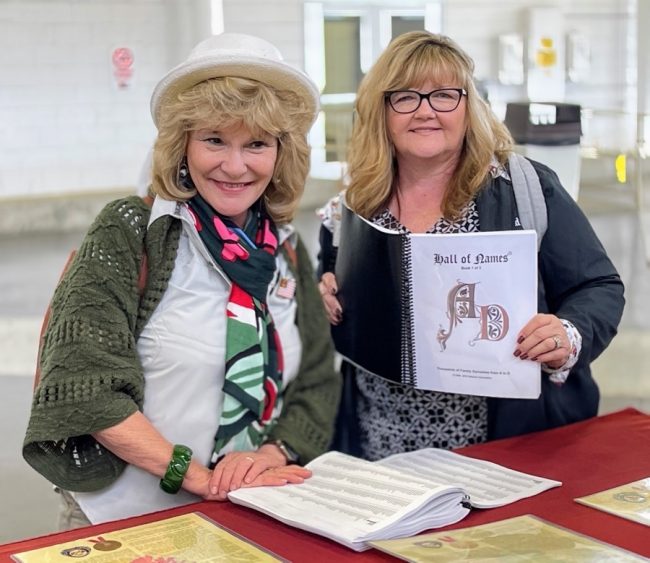 Coat of arms for Duda & Berry

OMG, the bagpipes also got to Robin! 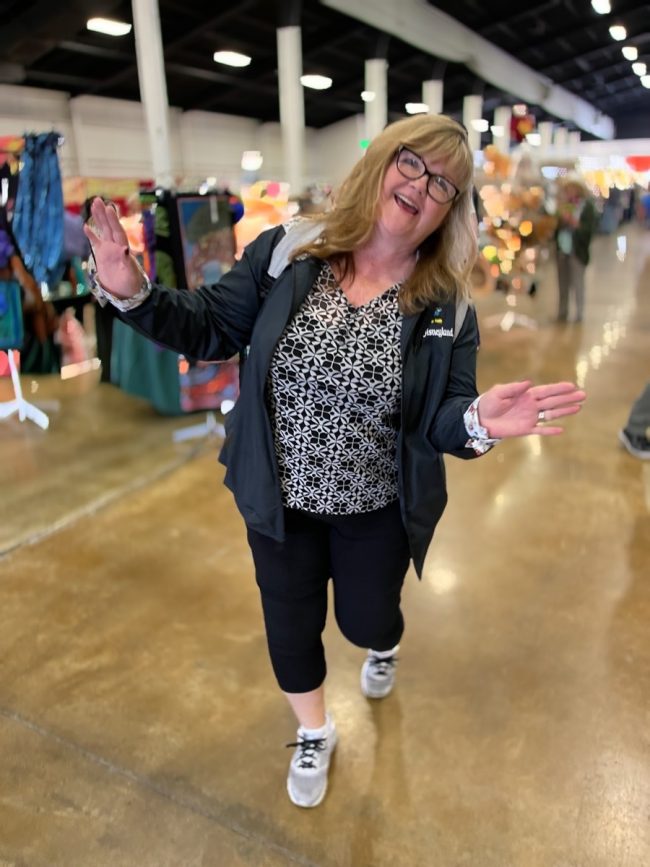 Bagpipes gone wild!  The dancing must be catching!

We had to see the British cars exhibit.  They looked so small compared to what we were driving during those years. 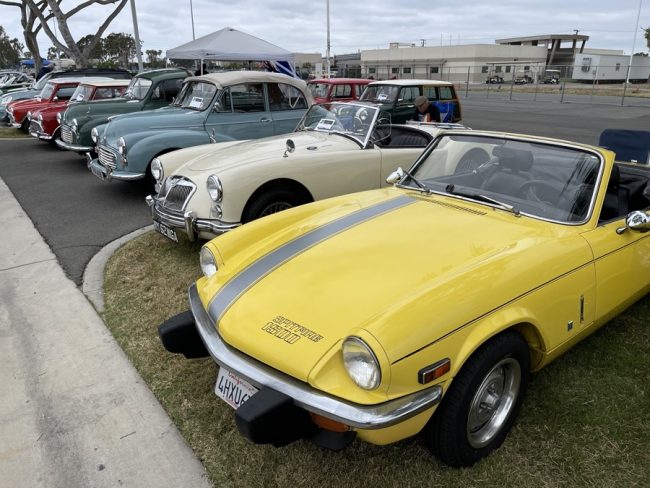 She got me!  I was really here!  We have no pictures of Bob and Nick; what happened! 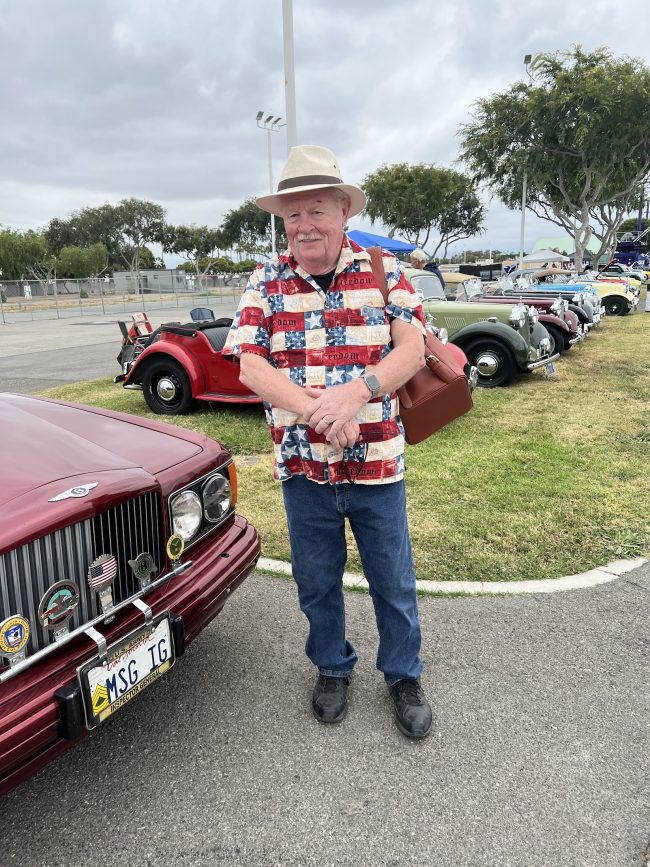 Would you buy a used car from this guy?

Walking back, we spotted two Scotties, and they were all dressed up! 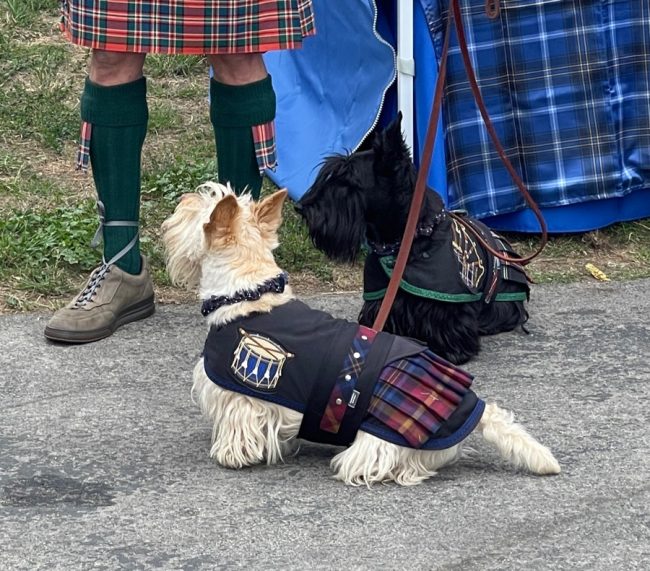 We returned home at about 3:00 PM, and we took a short one-hour nap before going to Jan’s for a glass of wine.  On the way, we stopped at David and Dianne’s to drop off some strawberries and flowers.

Returning home, we CRASHED hard!  We were in bed watching TV by 8:00 PM.

Just an old retired guy trying to finish out my last years on this planet. I lost my best friend and wife in early 2020. I was blessed again by reconnecting with Dr. Mary Côté, a long-time friend. Mary and I got married July 28th, 2021, and are enjoying life together and plan to spend the rest of our lives being a blessing to our friends and family.
View all posts by Paul →
This entry was posted in Adventures, Family, Food and Wine. Bookmark the permalink.