The Week Is Done; Thirty Weeks Until Christmas!

Fact: The closest state in the United States to Africa is Maine, which juts out further east into the Atlantic than most people realize.

It was 2:00 AM, and I woke up out of a dead sleep saying to myself, “Self, you failed to take out the trash!” We had too much fun last night, and I just forgot.  So, I took off my nightie (which consists of a pair of warm socks), put on my robe and shoes, and trotted outside in the pouring rain, sleet, and hail to do my husbandly duty.

OK, all is well until I slipped coming back in.  OMG, I looked at my arm, and it was covered in blood, mine!  I tripped, and my arm scraped the wall ripping off the skin.  I could have made a pup tent for a squirrel with all my lost skin.

I did NOT attempt to awake the doctor in the house, so I managed to stop the bleeding using a tourniquet around my neck.  Finally, the arm stopped bleeding, and I returned to my now-cold bed.  Poof; not a way to start Friday!!

Note: We had to change the sheets because I kept bleeding after going to sleep!

At 9:00 AM, Carlos and the crew showed up; they are adding more water outlets in the backyard, plus are readying the watering system to handle the new veggie garden that is coming perhaps as early as next week!

If that were not bad enough, I sat down for breakfast and got the evil eye from Scout! 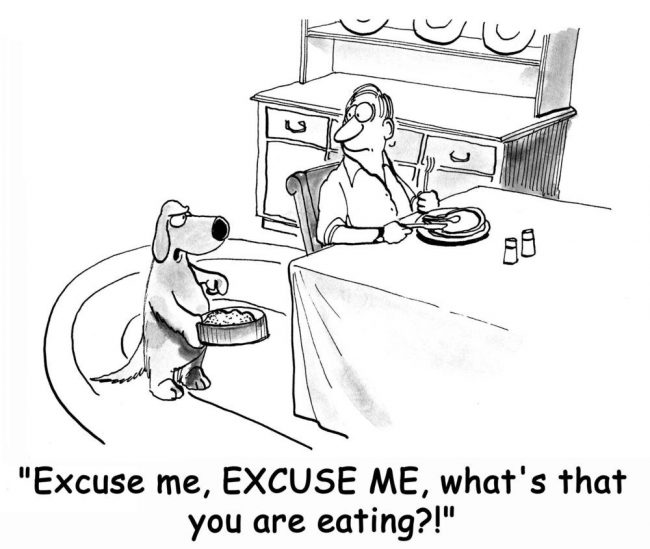 A vegetable garden means water is needed.  Carlos did the original watering system for this entire house, so he knows!  We brought two water lines into the south-forty; one feeds four additional spigots plus the outdoor washbasin.  The other provides the entire garden, which will be on a drip system.

Talking about gardens, “If you have five cabbages in one hand and six cauliflowers in the other hand, what do you have?”  Thinking about the answer?  “Big hands!” 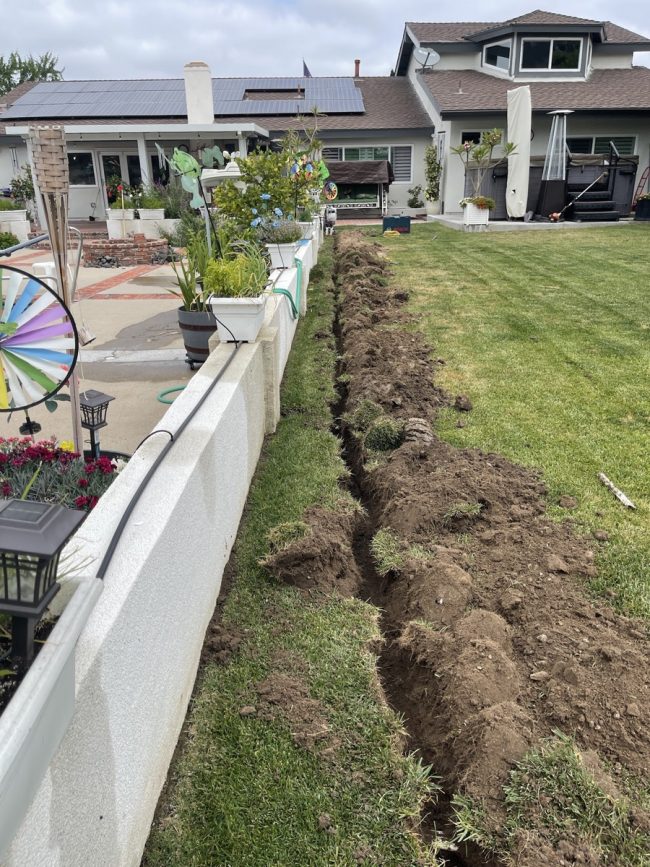 I sent this picture to Joe!  I told him I did it myself, and he called back in less than three minutes!

The blocks are laid out to represent the beds of the new garden. 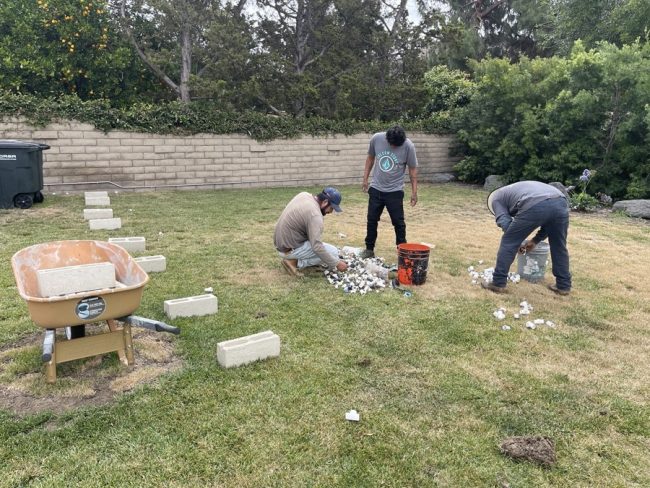 They were looking for parts!

The old garden in Los Alamitos has served us well since 2014; it was my 70th birthday present to myself.  These beds were three feet wide by twenty feet long.  The new garden will be roughly the same, but an additional bed will be six feet wide to accommodate corn and melons. 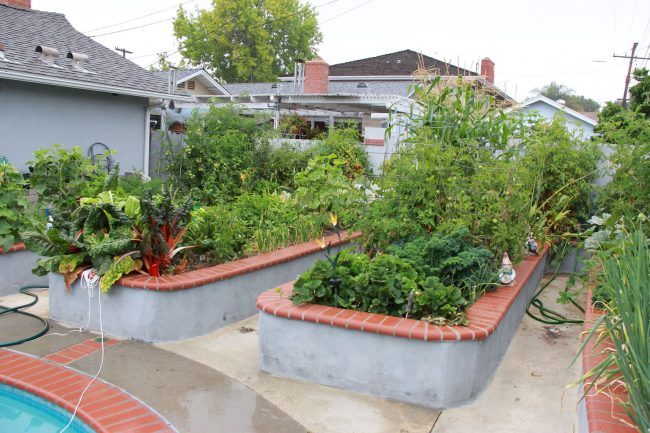 The beds were tall enough to sit on and do the gardening activities.

I will have water, electricity, and a drip system in each bed. 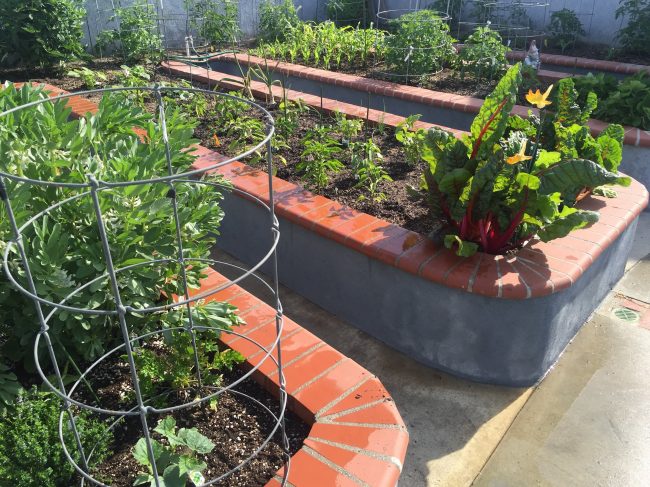 While Carlos and the team worked, I puttered doing some “honey-do’s.  The birdies seem to like our gate and told us so by leaving little deposits.  Thanks to Amazon, they will not be sitting on this fence anymore! 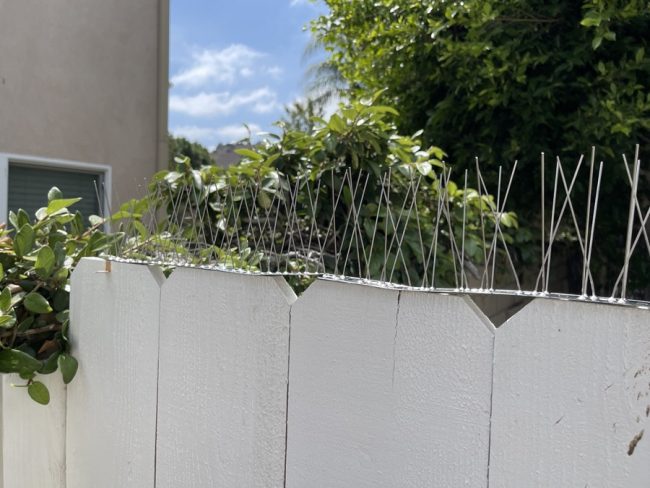 At 3:30 PM, we got cleaned up and went to Patty’s Place in Seal Beach to have dinner with Bill and Mary Capps, long-time dancing friends.  They are celebrating their anniversary, and we celebrated with them.  The staff was happy to see us (that’s where we got married almost a year ago!) 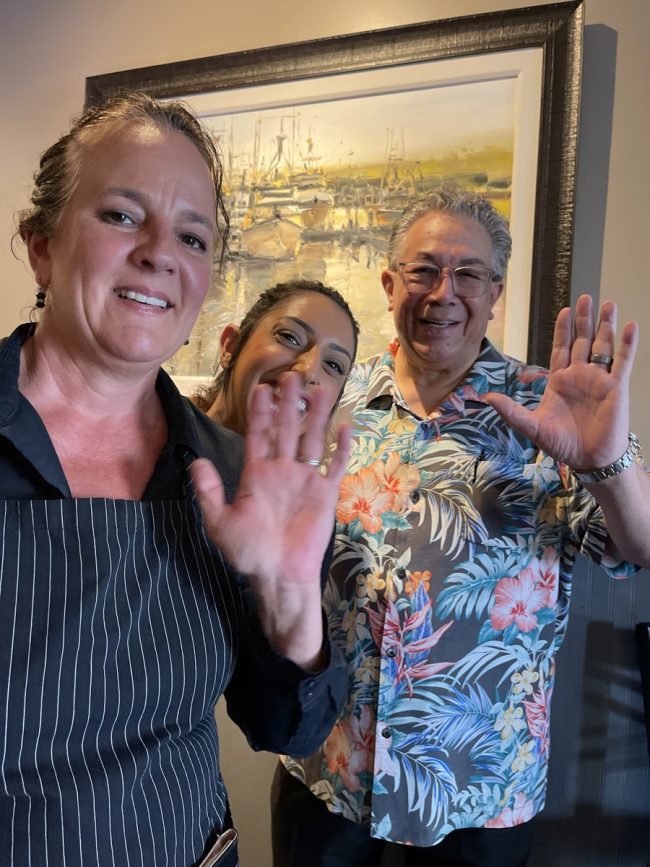 The gang is here!  They are saying hello to Chuck!

We had our favorite booth by the giant fish tank.  I overachieved and had the 16oz bone-in ribeye.  Mary did the filet mignon but a small portion.  Mary and Bill are watching their diet (and our) this evening; they split a nice big steak!

I overheard Mary telling Mary, “Husbands are the best people to share a secret with because they never listen anyway.”  She also said, “Happy anniversary to my husband, who still looks at me the way he looks at other women.” 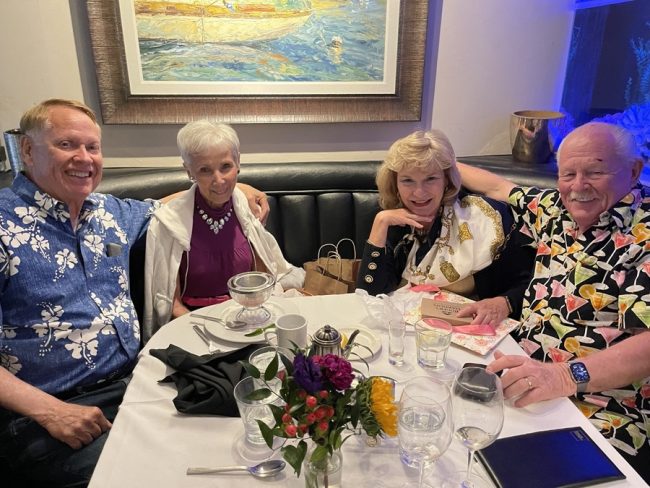 We are enjoying great company!

I decided to age the photo using one of the photo post-processing apps.  The picture would have looked like if it had been taken fifty years ago! 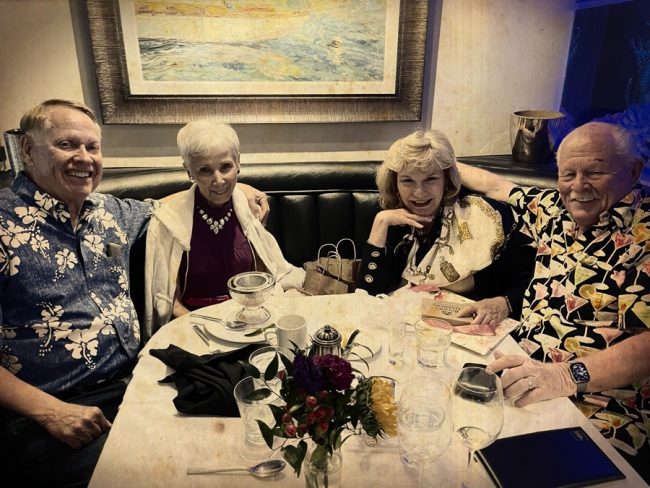 We aged the picture!

After heading home, we just crashed.  It has been a busy day.

Just an old retired guy trying to finish out my last years on this planet. I lost my best friend and wife in early 2020. I was blessed again by reconnecting with Dr. Mary Côté, a long-time friend. Mary and I got married July 28th, 2021, and are enjoying life together and plan to spend the rest of our lives being a blessing to our friends and family.
View all posts by Paul →
This entry was posted in Dining Out, Food and Wine, Friends, Working Around House. Bookmark the permalink.