Back In The Swing Of Things!

Fact: Did you know that July is National Ice Cream Month?  It’s the perfect time to indulge in the sweet treat, though you’d need a huge appetite to master the most giant scoop ever, which weighed a belly-busting 3,010 pounds.  Created by Kemps Dairy in Cedarburg, Wisconsin, as part of their 100th anniversary, the scoop stood 5’6″ high, stretched 6’2″ wide, and was made of around 733 containers of ice cream.  What flavor, you ask?  Strawberry, which means that it was a pretty pink and looked as good as it surely tasted!

The rain is gone, for now.  It was pretty heavy a couple of times around 3:00 AM.

We were up and cleaning the house early because it was time for our house cleaners to come, and we wanted to be neat!  This logic sometimes fails me?

I used to get bummed out when it rained; then I realized that it’s God’s way of washing off hippies. Mary went outside to make sure the doggy toys were out of the path of the rain.

Dancing in the rain?

We heard the storm coming when the iPhone went off and warned us of approaching lightning.  The iPhone started smoking and it flashed bright lights. 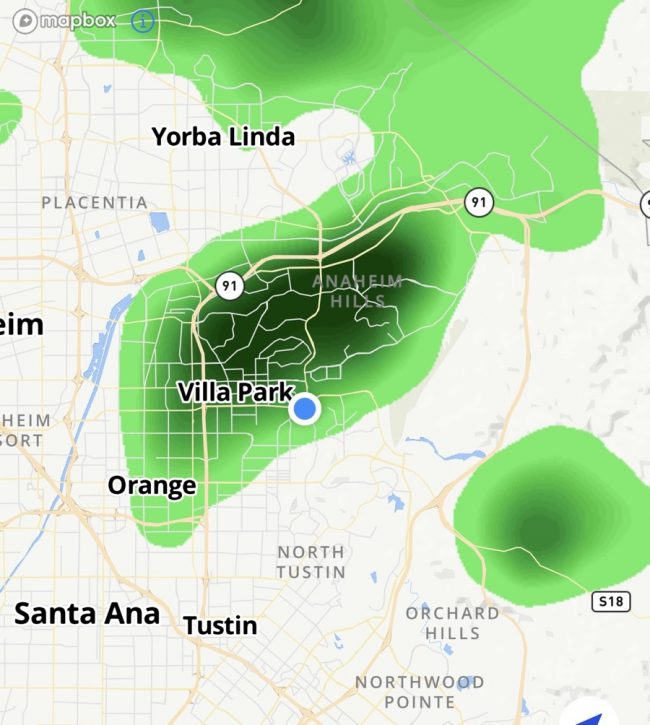 We had rain on and off all morning.

Today, after the cleaners depart, we will work on the new Hope Chest!  It needs a slight amount of work, and we will clean it with Mary’s super-secret German wood wax. 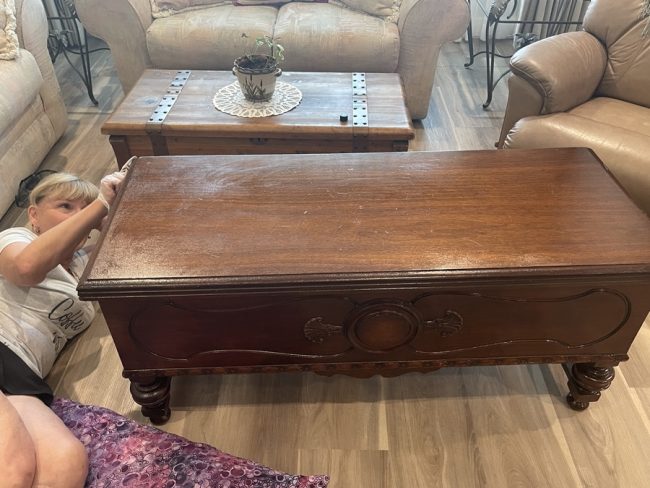 A little elbow grease, and it looked like new.

Did You Know?  Hope chest history dates back to a time when families exchanged property and goods.  The exact origins aren’t clear, but it’s believed that the hope chest provided the bride’s dowry items, such as any clothing and personal property, to help her begin her new life.  When designed primarily for a future wedding, there was a good chance that a young woman’s hope chest would contain treasured goods such as hand-embroidered linens and delicate pieces of clothing.

The rain was pretty hard mid-morning, and Scout enjoyed chasing the thunder off. 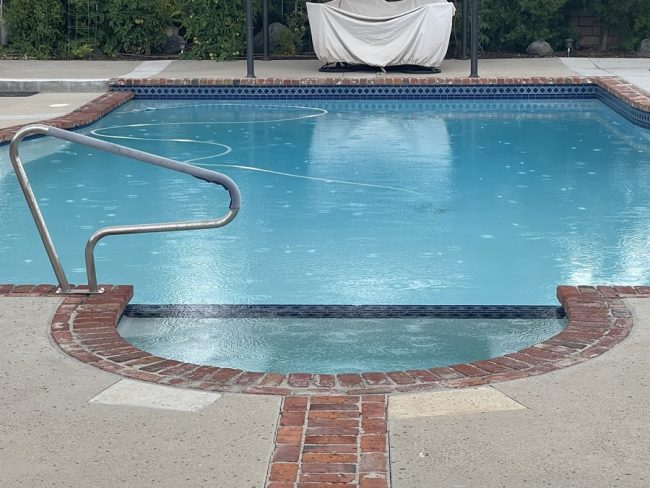 It was raining, and he was out barking the thunder away; we both got wet bringing him inside.  He is a funny dog.

We stayed under the patio but first, we retrieved Scouts’ toys from the yard.  Mary recovered Moosey, his favorite toy, from drowning. 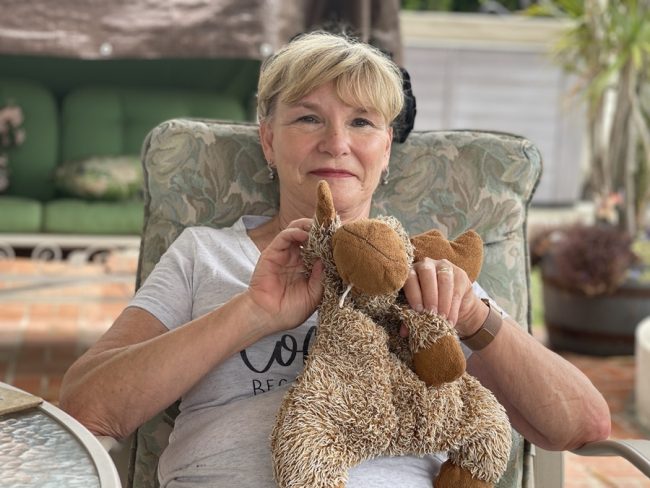 We both have readers, Mary has a Nook, and I have a Kindle.  We read under the patio for a good hour, just listening to the rain.  Reading one book is like eating one potato chip; we usually have two books, each going simultaneously.

The hope chest was treated with oil, and the oil was left to soak into the wood.  You can read about the history of the company that made the cedar chest here.

We were amazed to understand young women today have NO idea what a Hope Chest is; we tried about ten times asking girls under thirty if they knew, and nine out of ten drew a blank! 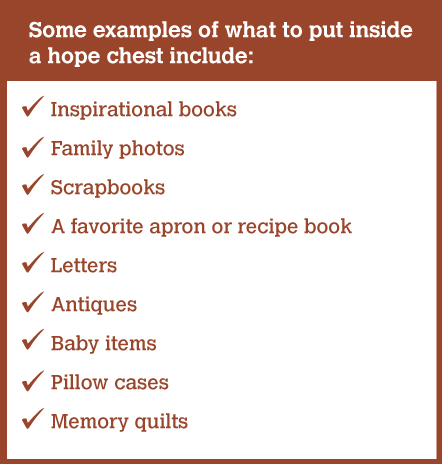 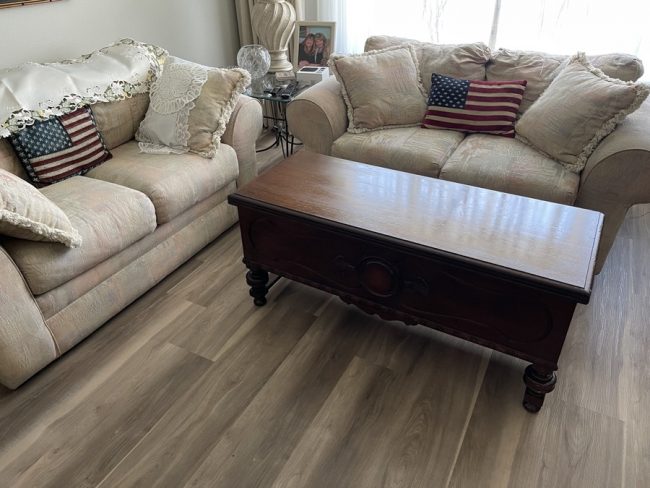 The clouds were beautiful all afternoon.  We made some zucchini bread.  We used the enormous overgrown zucchini, and half of it made six mini-loaves of bread.  How does the zucchini bread court his sweetheart?  With lots of flours.

While working in the kitchen, we watched TV movies.  The first one was underway when I came in, so I decided to take a nap.  We also studied some recipe books we recently procured.

It was called  How Do You Know.  When everything she’s ever known is suddenly taken from her, Lisa (Reese Witherspoon) begins a fling with Matty (Owen Wilson), a major league baseball player and self-centered ladies’ man.  Before their relationship takes off, Lisa meets up with George (Paul Rudd), a straight-arrow businessman facing his own serious issues with his father (Jack Nicholson) and the law.  Just when everything seems to be falling apart, it doesn’t.

The second movie we watched was Red River from 1988.  Red River was a remake of the John Wayne classic of 1948.  Produced in 1988, it was not as good as the original but quite entertaining.

The sky was mesmerizing, with the images changing every few seconds.  The upper winds were quite wild this afternoon. 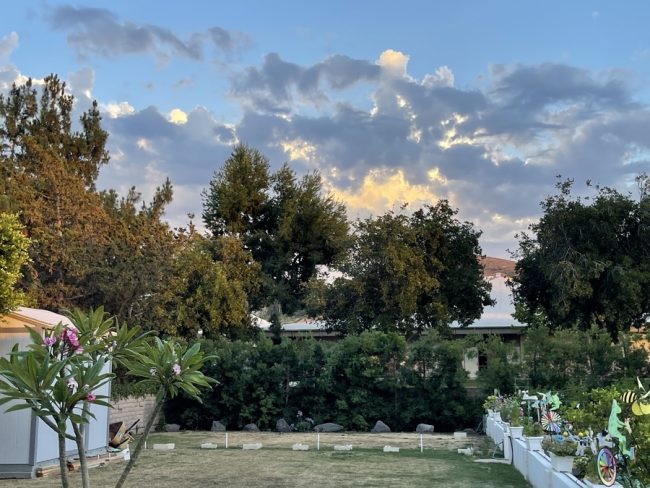 The clouds had a silver lining.

The subset was magnificent.  My favorite color is sunset; the sun had just set when I snapped the photo looking west.  At some point, I stopped seeing the sunset as the end of the day but, instead, the beginning of the night!

Watching the sunset is illuminating. 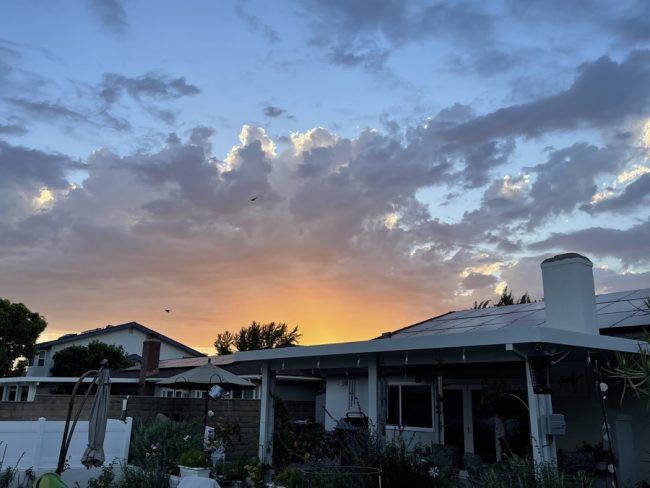 It was 8:08 PM and 82 degrees when this picture was snapped.

We watched another movie while we were going to sleep.  I turned off the TV at 11:00 PM and read some more; reading is much better than TV.