It’s Friday; Out With The Old (It’s Trash Day)

“I miss her all the time. I know in my head that she has gone. The only difference is that I am getting used to the pain. It’s like discovering a great hole in the ground. To begin with, you forget it’s there and keep falling in. After a while, it’s still there, but you learn to walk around it.” – Rachel Joyce

Sue loved her gardens. We became members of many of the arboretums and gardens around the SoCal area and spent countless hours visiting them.  Many times it was like one mind seeing the beauty of nature; we would have the same thought about the same view each of us was seeing. One of our most favorites was Sherman Gardens because it was small and had a lovely little restaurant associated with the facility. Here we are in our “nature outfits,” and the white peacock it keeping an eye on us!  She was such a joy to spend time with, no matter what we were doing! 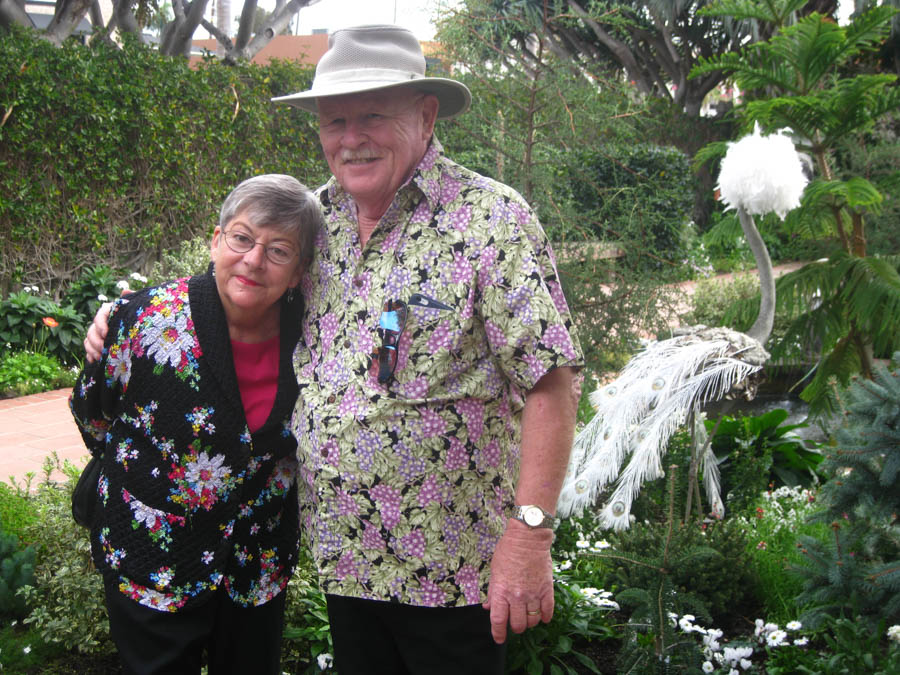 4:00 AM and the peppers opened wide, that was my wake up call.  I got up, lit off the heater to 70 degrees, and headed into the kitchen to get my wake up juice!  Four minutes later, I was on the phone to Colleen discussing the plans for the day!

Colleen sent me an old photo of the father-daughter dance I was so proud to take her to! To make it special, we went to an upscale Japanese restaurant where I told Colleen that wasabi (wasabi is almost always just a mix of horseradish, mustard, and a bit of green dye) was guacamole  I never did that again! 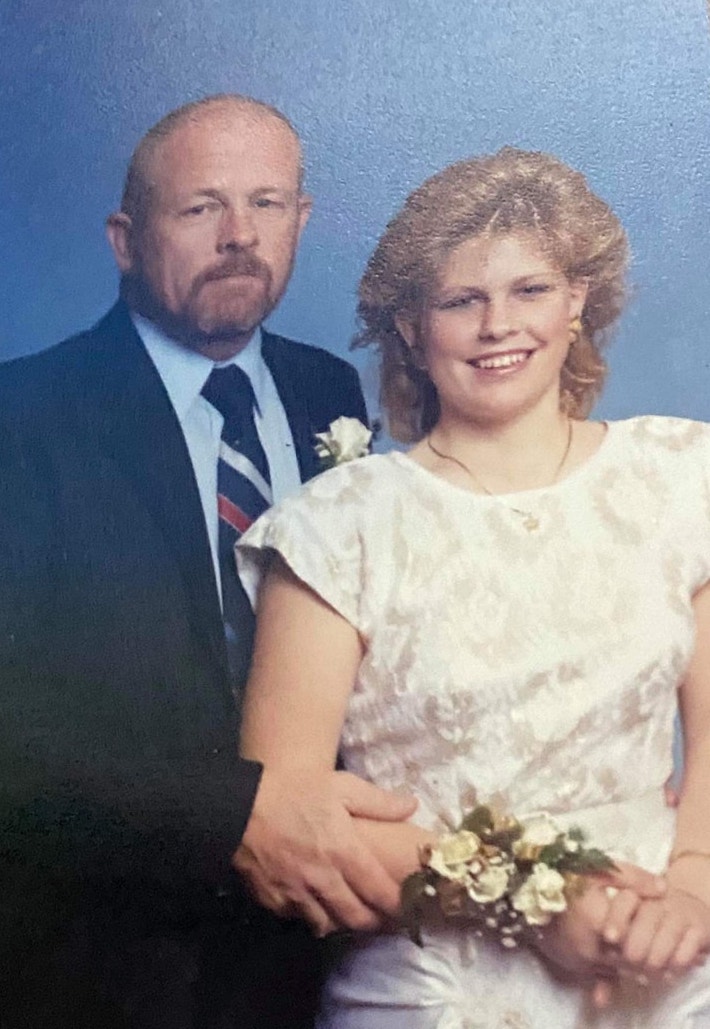 Colleen and her daddy! About an hour after I poisoned her with the guacamole substitute!

The sun began to rise, so I snapped a picture of my garden to make sure the rain didn’t flatten the little veggies.  So far, so good! 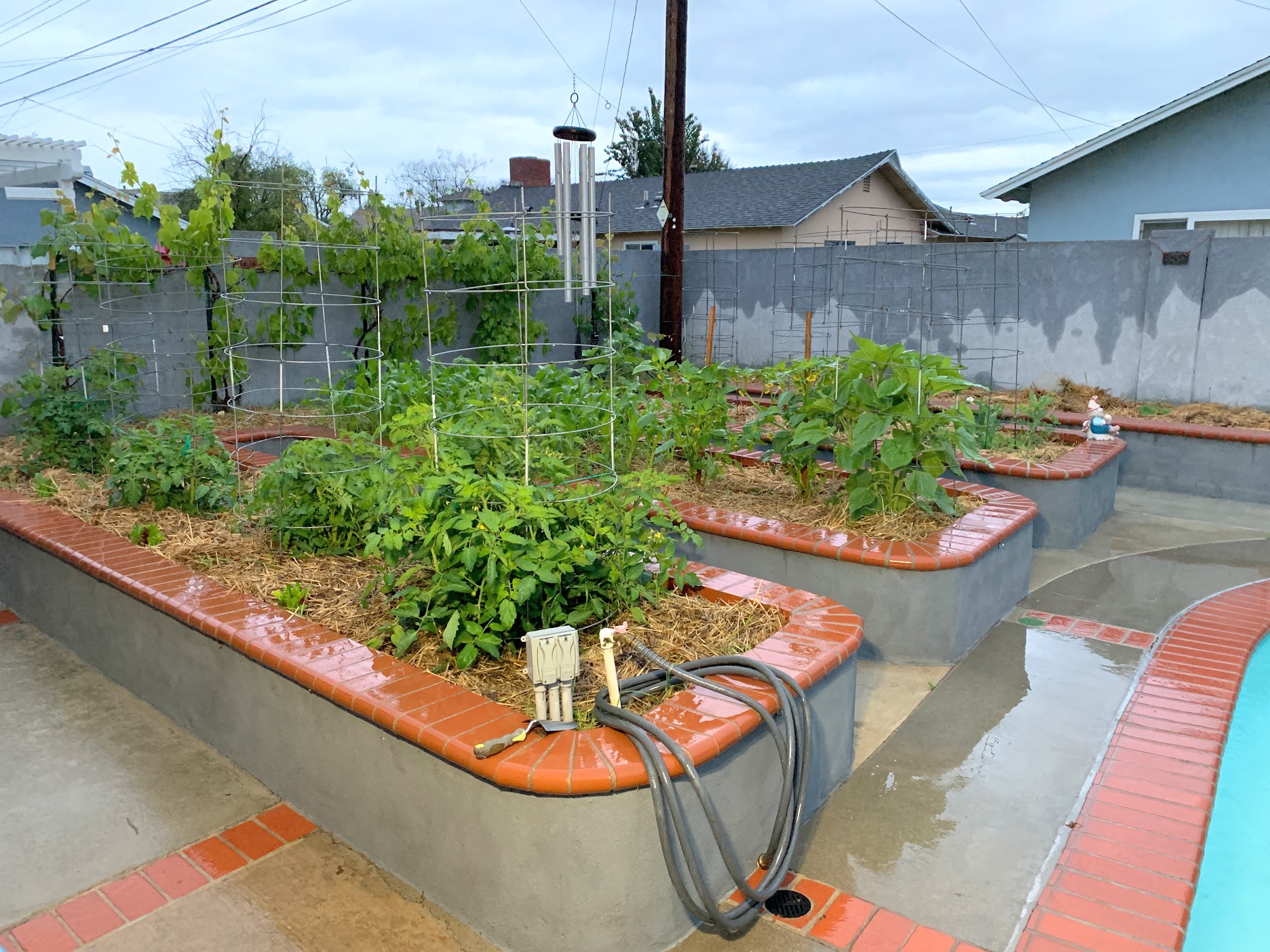 Looking pretty good but a little dry air would be sweet!

The coffee smelled so good I had two cups while cleaning out the utensil rotary devices.  They were full to the gills. I do not need ten wooden spoons, eight plastic spatulas, nine plastic string spoons, and many other items.  The containers can now turn, and I can get to everything! 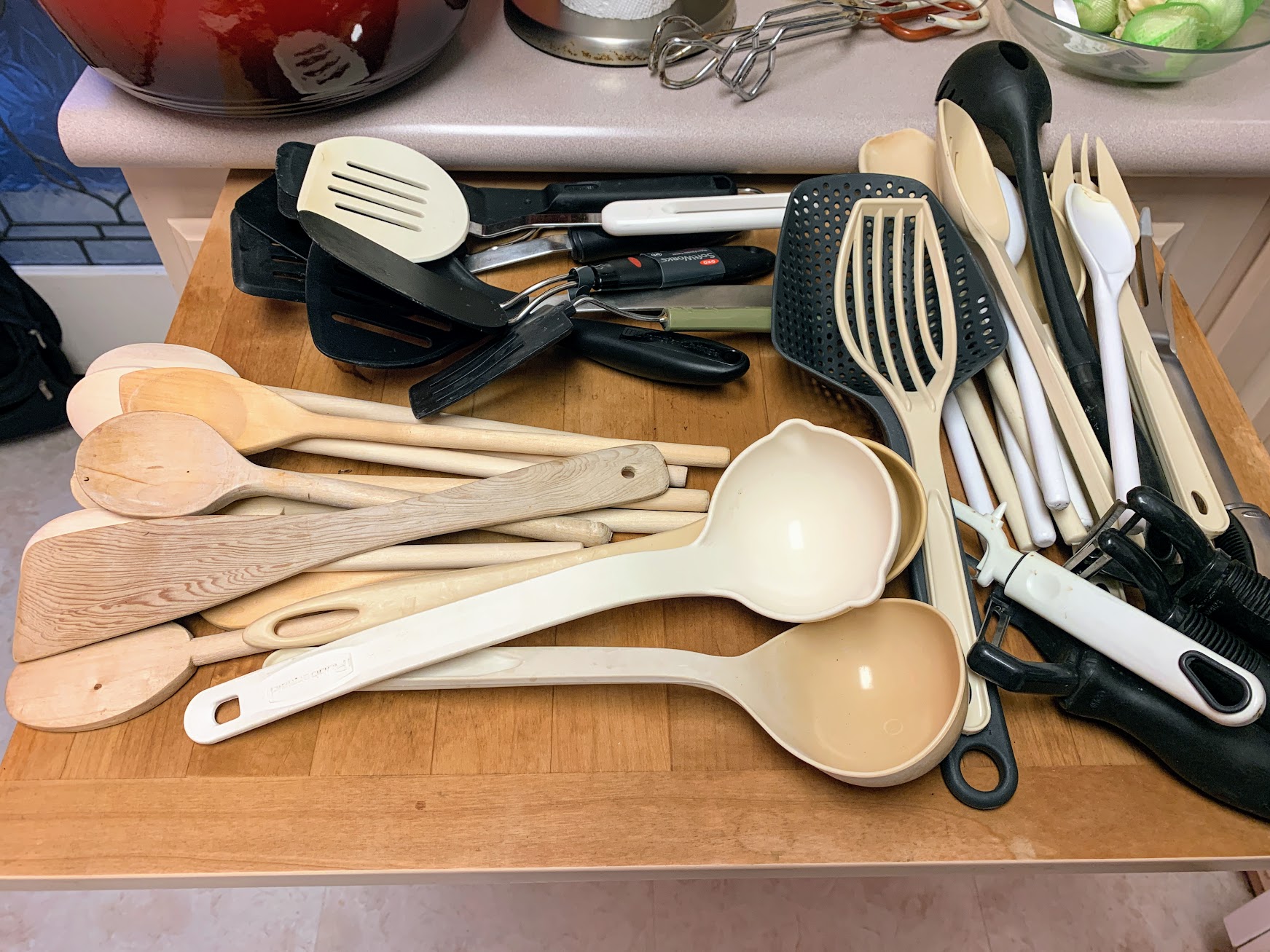 I saved all the duplicates, just in case!

At 10:00 AM, we did a three-way with my cousin, once removed, Paul David Mall (he got his name from me!!)  In school they called him David Mall because Paul Mall was too close to Pall Mall, the cigarettes!

The Pall Mall brand was introduced in 1899 by the Black Butler Company (UK) in an attempt to cater to the upper class with the first “premium” cigarette. The cigarette is named after Pall Mall, a well-known street in London.

Just before the call, I remembered I had to take out the trash.  I was puzzled. What should I wear?

We joined Zoom at 10:00 AM with Dave, Colleen, and Robin. We chattered for almost an hour! Great fun! 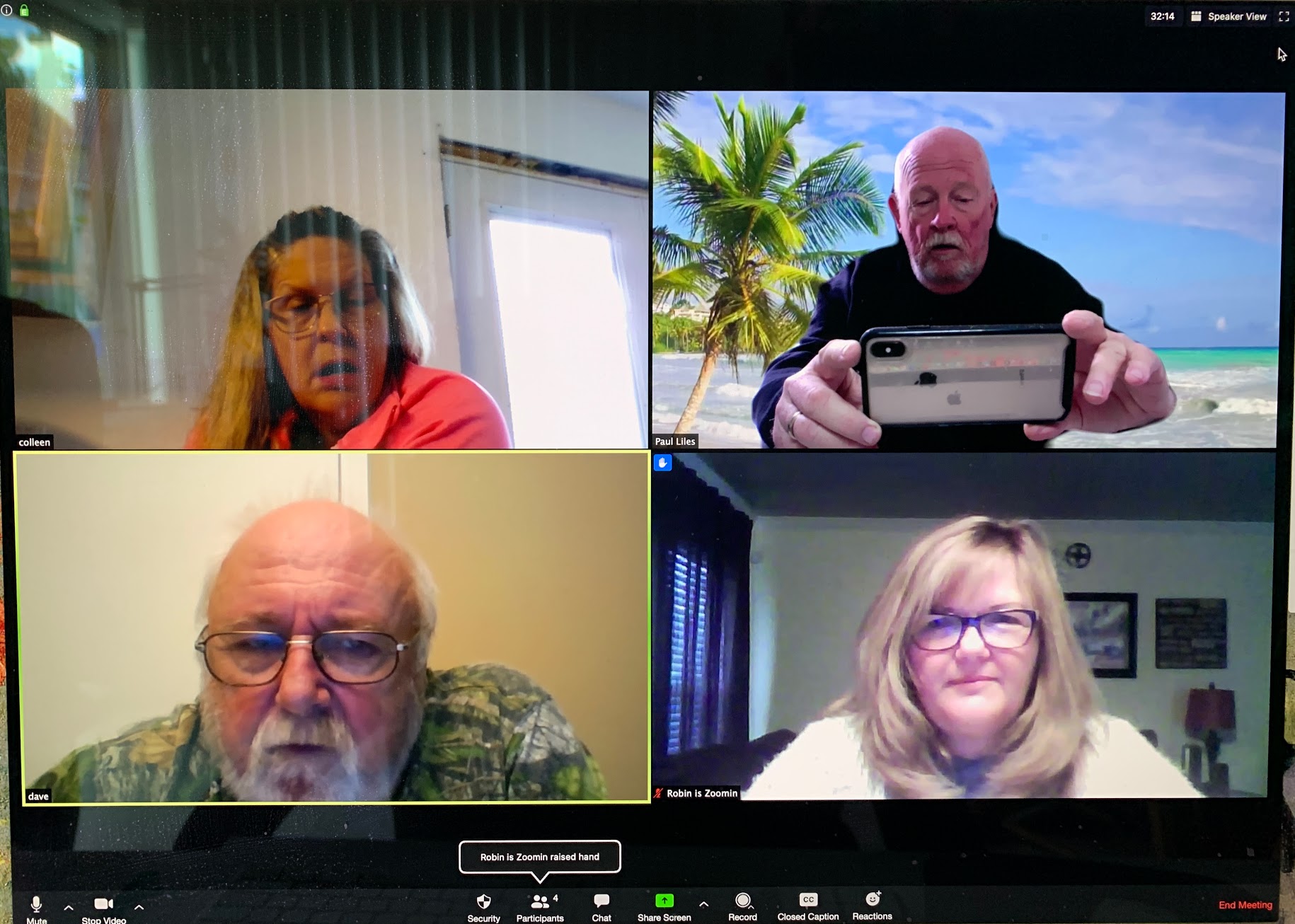 New Hampshire; Louisiana, Corona, and Rossmoor all at once!

We laughed a lot and shared funnies about our situation being indoors for a week.  I could not resist this one: 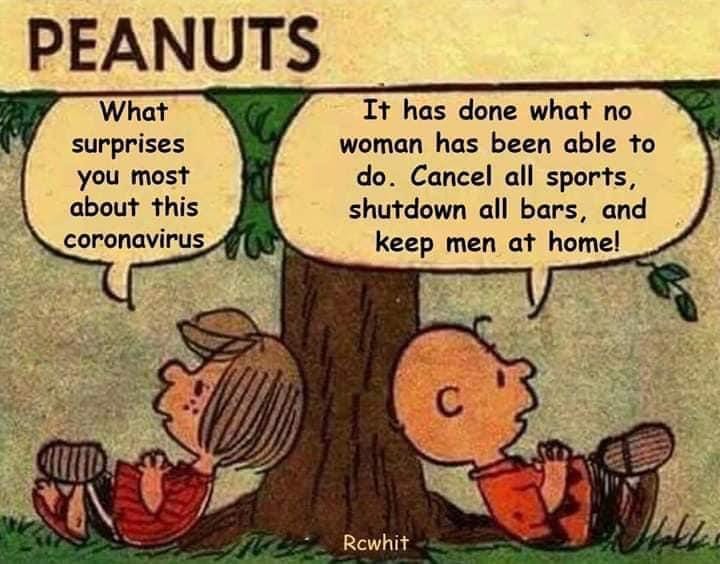 My scale said, “Congratulations, fat boy, you are now down to 202.2 pounds! What did you do, wash your hair?”  That scale is such a smart ass!

To pass the time (and be able to get to my workbench again, I straightened up the garage! Now all I need is some shelves to put things on!  I keep thinking I will be a small, very narrow shed in the side yard to store the boxes of goodies. 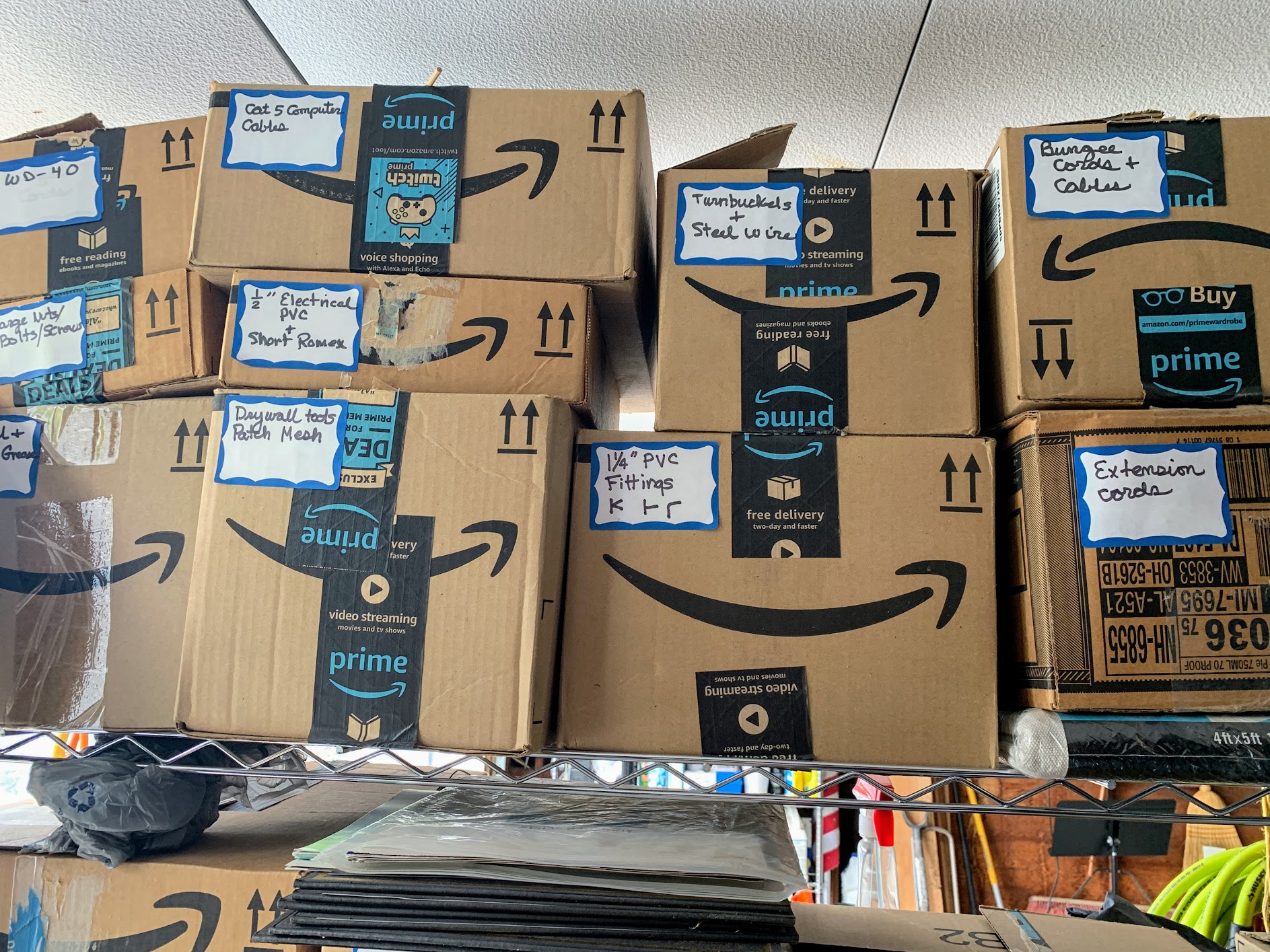 I have 50+ such boxes with my organized
gotta-haves”!

The trash man was here, and I brought in the empty cans, although he forgot to empty one of the containers!  My straw bales were next to the trash cans, and this picture will show why I let them “age” before putting straw mulch in the garden.  The rainwater that leaked down inside the bales cause the seeds to sprout.

Even though the bales are supposed to be straw, some seeds get into the bundles and sprout! Straw is the bare stalk remaining after a nutritious seed head, such as barley or wheat has been harvested. If your goal is simply to cover the soil, as for paths, then straw is fine. 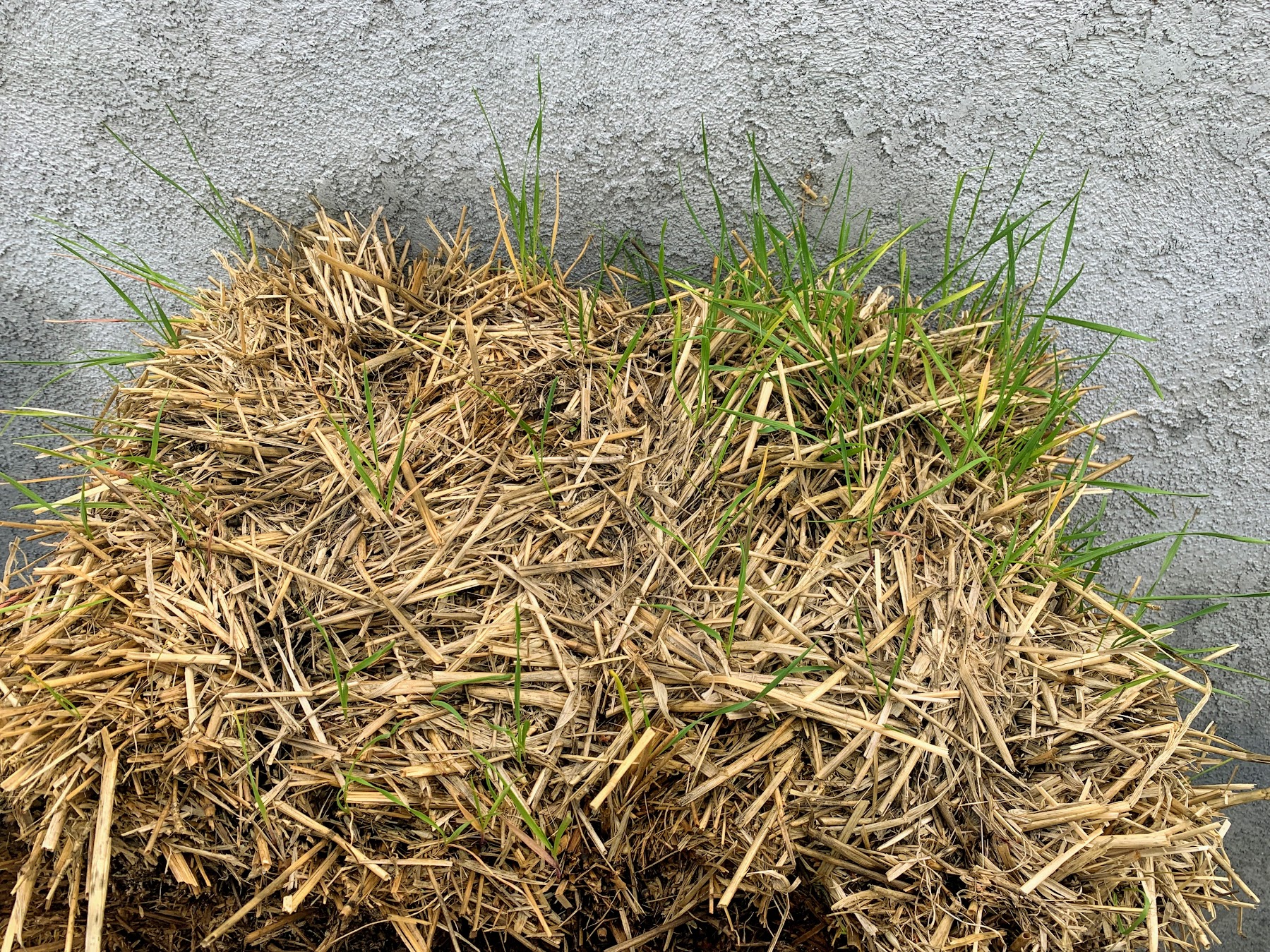 If I didn’t age the straw, the entire garden would be loaded with grass from the hayseeds.

Time for vittles!  Tonight we are having: 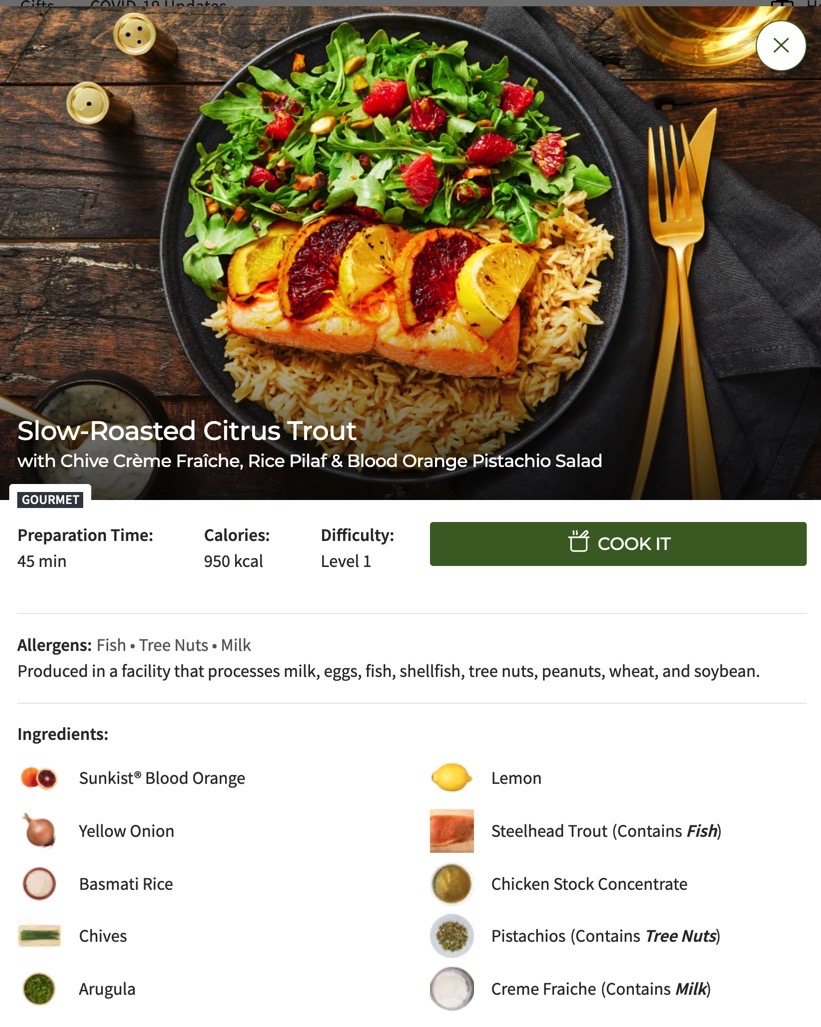 Scrup-dilly-ishious (My spell checker when nuts on this one!)

Mess-in-placed was ready for Chef Paul to work magic! 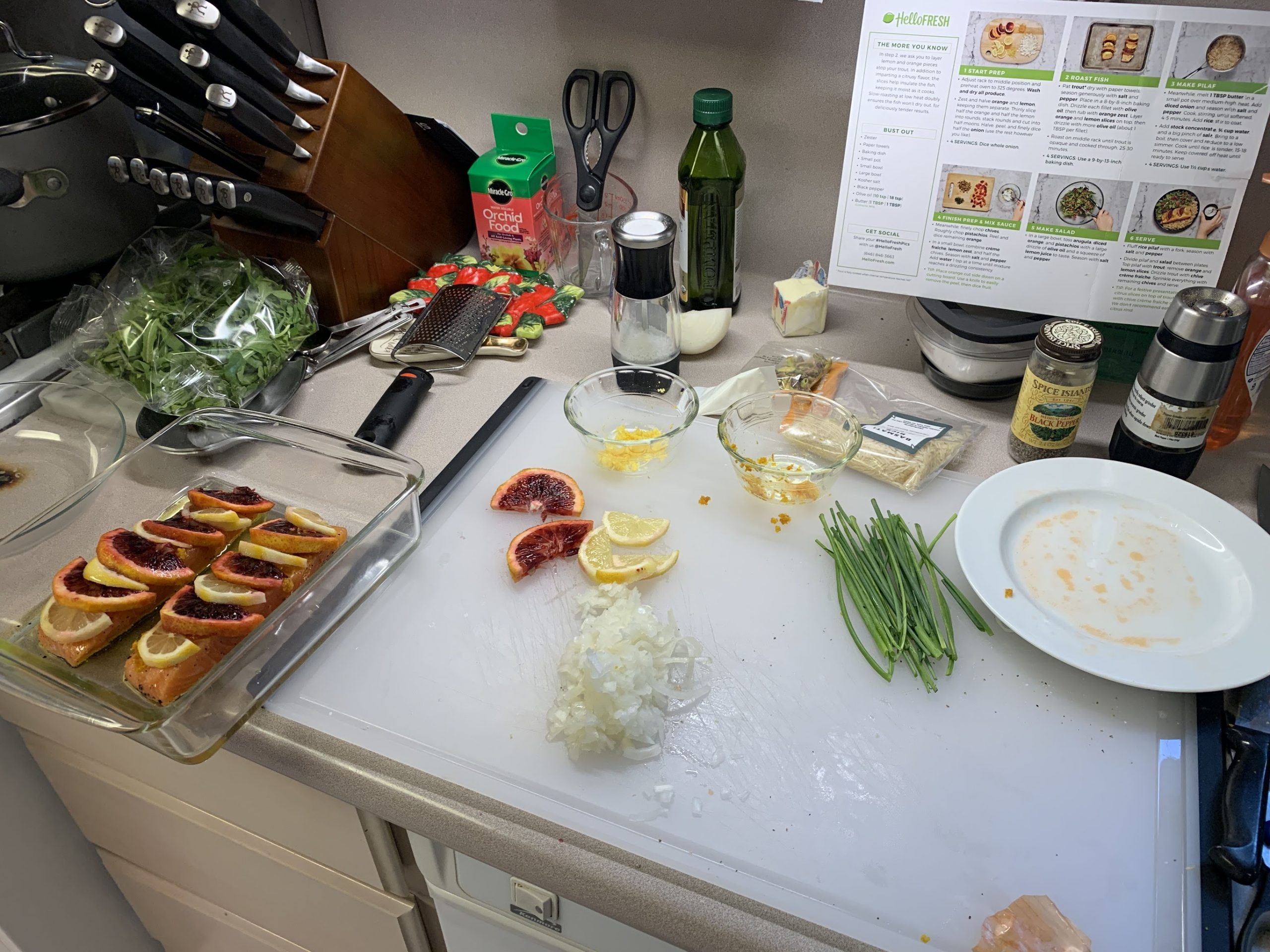 Sure makes cooking easy when everything is at your fingertips!

OK, ready or not here it comes into the beautiful hot 325-degree oven for eighteen minutes! 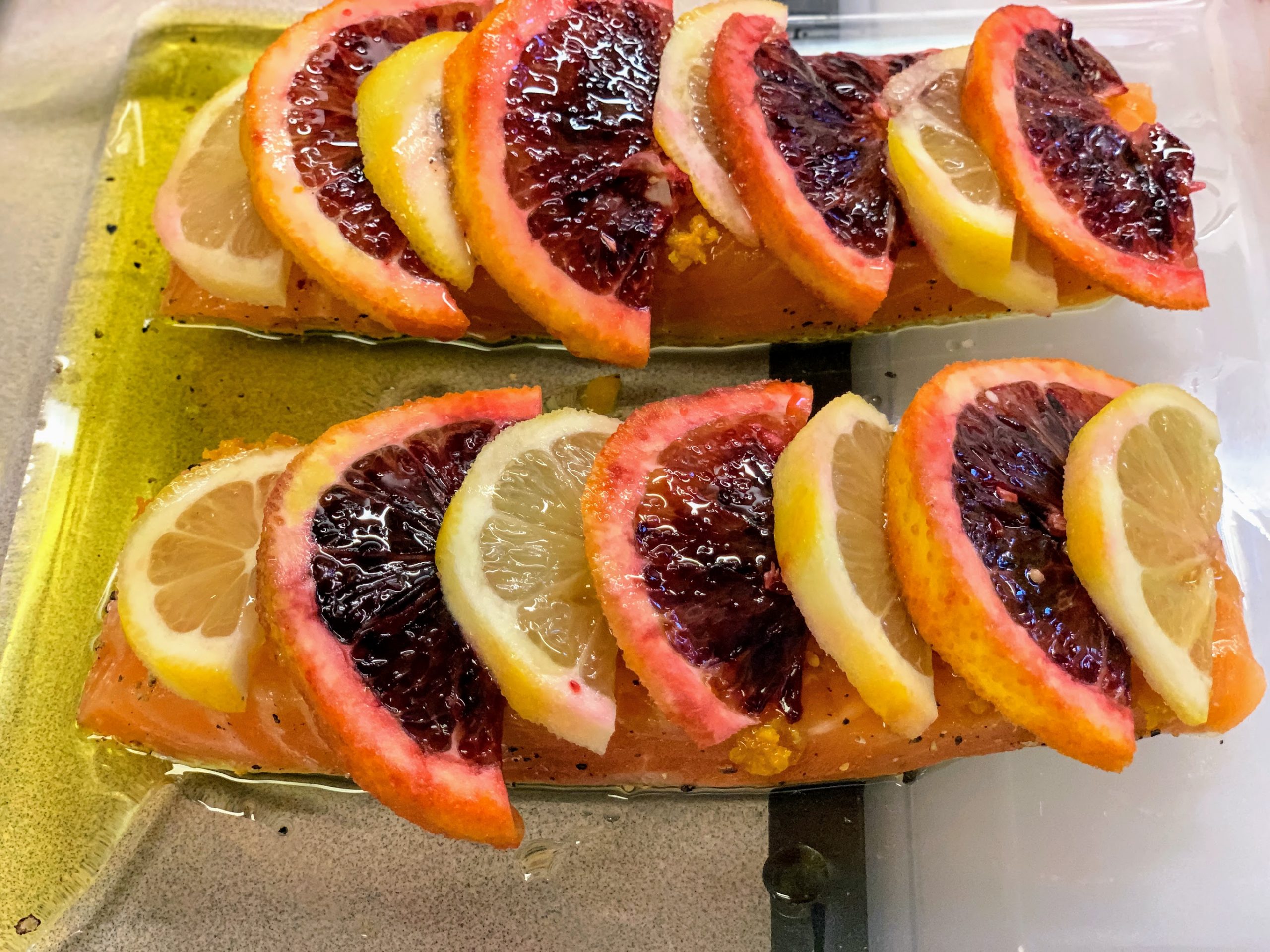 The lemons and blood oranges added a distinct taste to the meal!

It took about 25 minutes to prepare and cook the meal, and it was a load of fun.  I now know how to flavor rice in many new ways I never thought of before.  The trout was perfect, and I have some ideas of changing things around next time.

It’s time to sit, have a leisurely meal, and sip wine (albeit non-alcoholic).  Tonight, we are complete with candles! 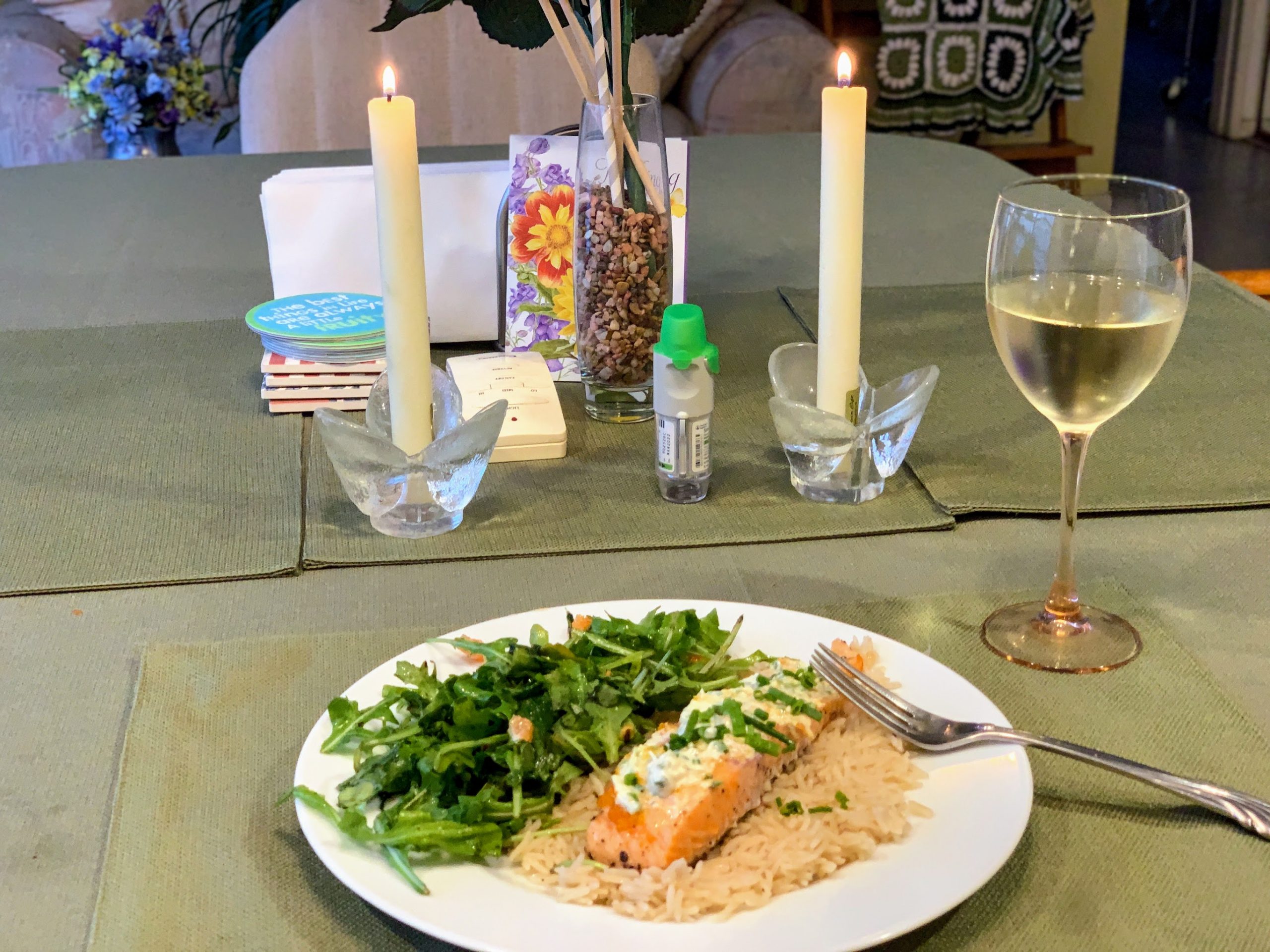 Simply delightful! There is not a lot of calories in the meal either, but it is loaded with proteins.

After dinner, I decided to call Robin and Lee before cleaning things up.  I wanted to get them before they crashed.  Colleen I will call in the morning as it would have been 10:45 PM if I would have called tonight!

Back to the kitchen for cleanup duty, start the dishwasher, and watch a movie before crashing.  I hope tonight is more restful than last night.

Perhaps a little humor before bedtime? 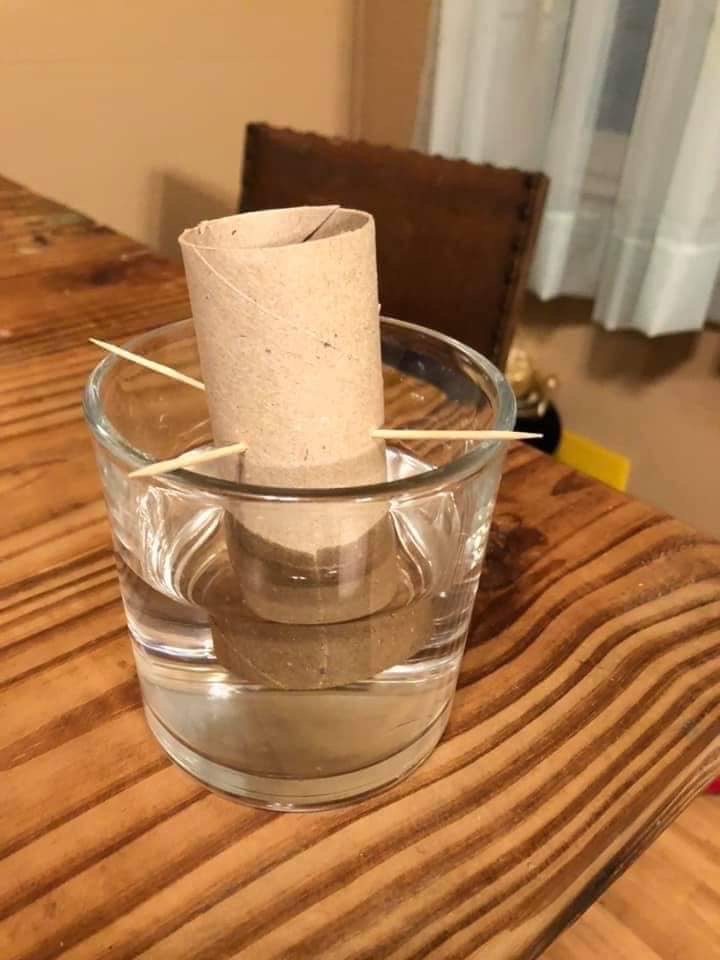