Happy Birthday, Son! You Are Now Older Than Dirt! 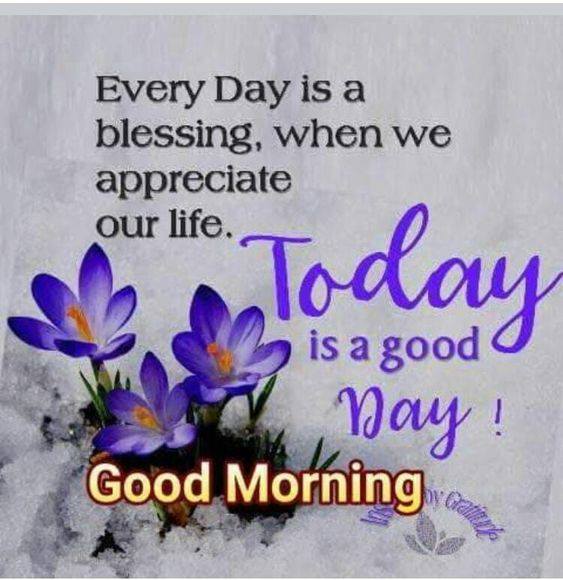 I am so lucky. I had a wonderful wife, ave super kids and grandkids, and the most wonderful friends. Today will be a good day1

You know Sue never danced until I began to teach her in 1988. The first dance was in the 6080 Restaurant on Firestone Blvd in Downey, during a late lunch. We had finished lunch, and they were playing Sinatra, and I grabbed her and said, “Let’s dance!” She, of course, said I do not know how, so I switched into my “forceful lead mode,” and off we went.

We never stopped dancing for thirty plus years. Here we are in the Casino Ballroom in Avalon waiting for the orchestra to kick into gear with four hours of the 1930s and 1940s music, the Swing Era. We took lessons for twenty years.  As with everything else, she became an excellent dancer. I miss holding her and moving about the floor! 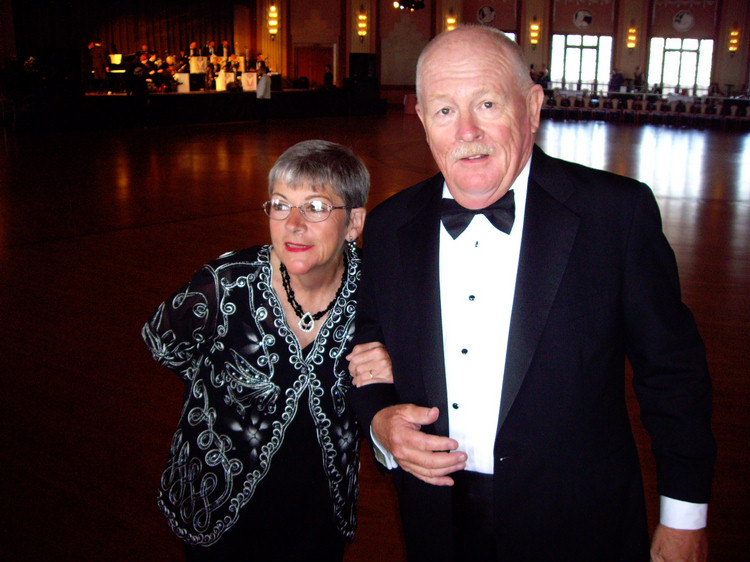 We enjoyed all the formal dances, and we generally had one or more a month for years and years!

Today I have an appointment with my heart doctor (No, it isn’t to see if I still have one!).  No problems I know of, but I had not seen him in several years except at the hospital when I was with Sue.  I ran into him a month ago, and he shared his condolences as he knew about Sue, she was popular with the doctors because of her personality.  He said, “Come up and see me sometime!” I was a little worried at first, but then I began to think it was a good idea!

Tears! I received a beautiful letter from a long time friend, George Lee, yesterday. As I read through that note, I teared up and felt special. I had no idea how George felt about Sue and I. He was, and continues to be, a super friend that we met back in prehistoric times, the early 1990s. I plan to share the note with Robin, as she will understand.

Thank you, George, for making me cry, bringing back memories, and being a special friend! Love you, man!! 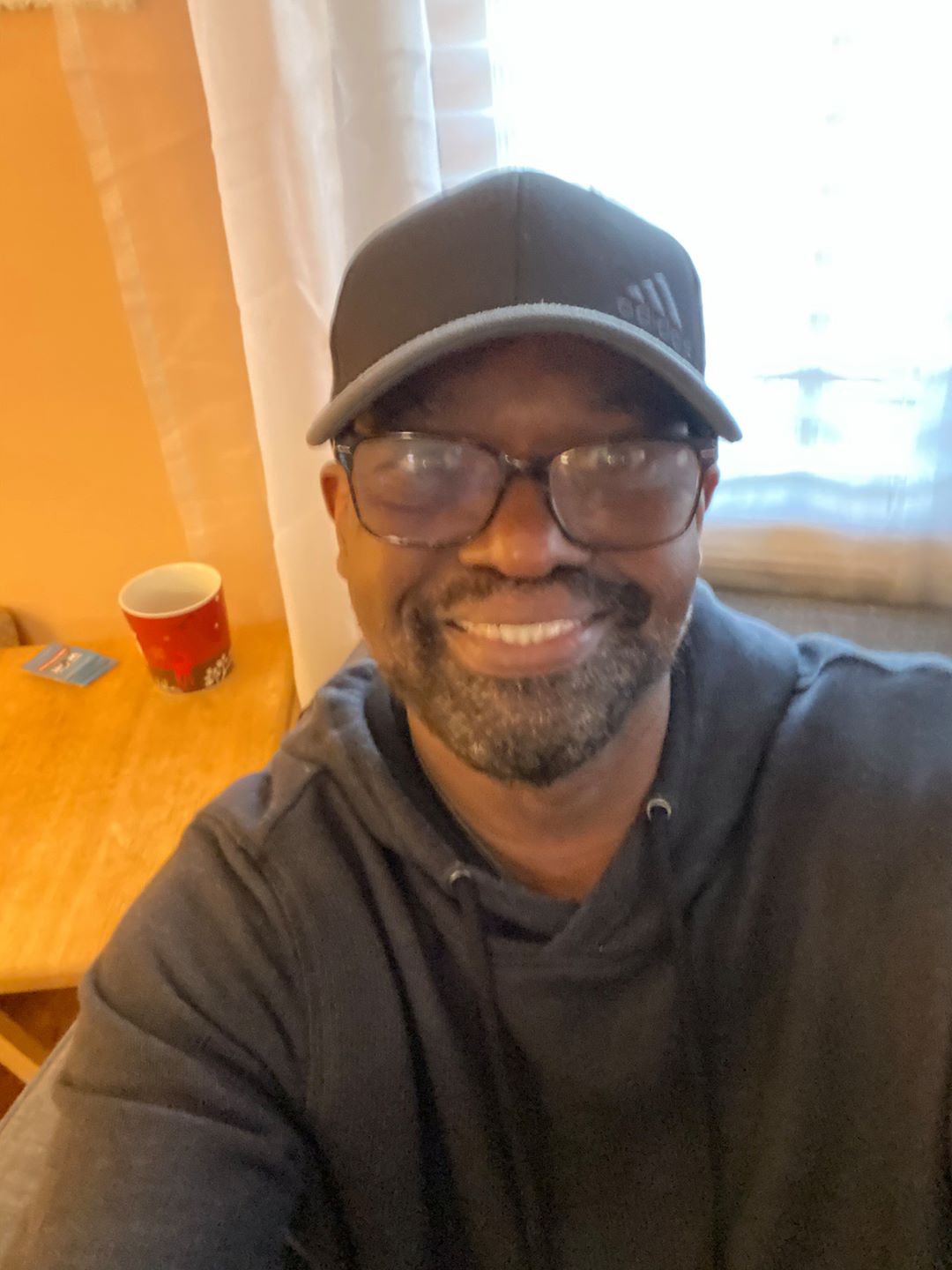 A good friend for over a quarter-century!

Happy Birthday, Son.  Joe is a ripe old forty-nine, oh hell, let’s just round it up to fifty!  Oops, the phone just rang!  (short pause)  Oops, make that forty-nine again! He is watching me! 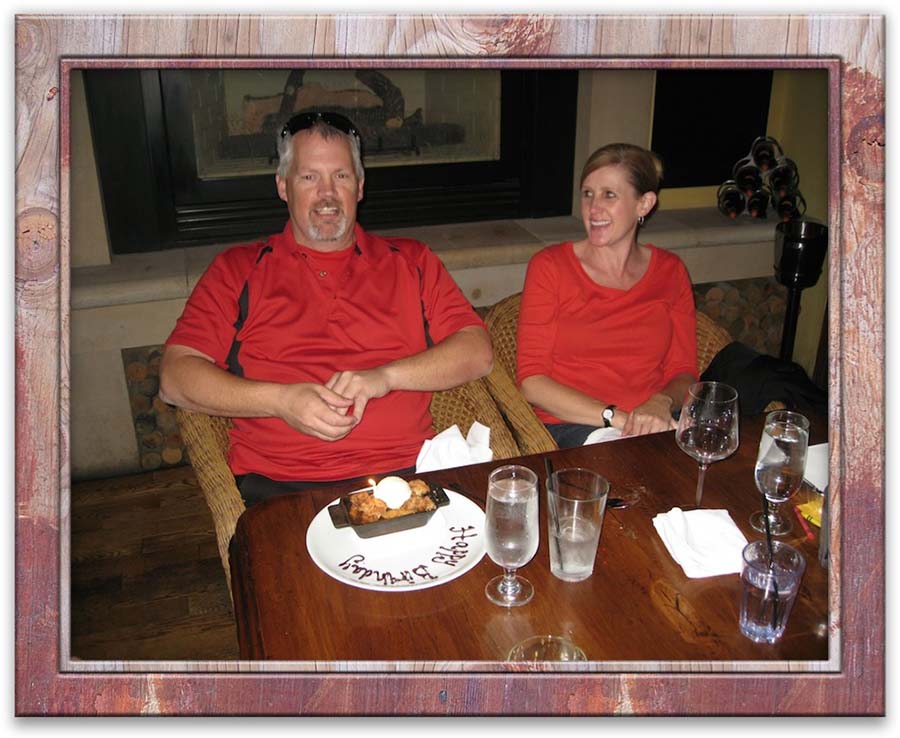 We loved taking Amy and Joe out for their birthdays but NOT this year, we are all locked up!

Colleen and I talked for a bit this morning.  Her doggy is okay, although he, like me, is a tad overweight.  One hundred sixty-two pounds of St. Bernard!  Dakota is cute and has Colleen well trained.  Whenever she gets on the phone, he wants to go outside (or come inside).

I love bacon, so when I found this recipe, I had to try it!  It works; it does!  It takes a little longer, but now I know why you should not throw bacon into a hot frying pan!  Rendering the fat is essential to get the bacon to taste good!

It is now 10:30 AM, I must brave the downpour and go see the doctor,  Well, it was amazing, the parking lot was empty. I usually have to drive around several times to find a spot or park on the top of the five-story parking structure. It’s so far up I get nose bleeds!

My heart doctor and I are pretty good friends. He used his ultrasound system that looks like an iPhone and with help from that frozen grease took a look at my heart.  He showed me everything he was seeing and validated the fix they did to the old ticker five years ago is doing fine.  I have a little bit of cholesterol on one valve but nothing to worry about.  After a few questions and checking my weight, and said, “Whatever you are doing, keep doing it.”  He actually said, “You will be one of my 90-year-old patients who comes in dancing down the hall!

So, it looks like my 3-5 mile walks a day will return to my daily schedule of activities.  I was so encouraged, I wanted to walk today, but alas, the rain was coming down in buckets, so I decided to do the next best thing, paint!

Time for lunch, so I opted for hamburgers! In 75 years, I never cooked a burger inside the house, but today, the record was busted!  I cut up fresh tomatoes, a big slice of onion, lettuce, slapped some mayo onto a toasted bun, and slammed on the burger.  The addition of a little ketchup finished off the preparations. It was so good; I made a second one!  Burgers and fake wine, a meal fit for a king!

I got the paint from the garage, moved everything around, cleaned the walls, and went to town painting.  The color is going to be just fine, a beautiful pastel blue.  Blue is perfect for the bedroom, soothing, so says the design books!

I have computer-controlled LED lights all over, so I turned my side to blue to highlight the wall, it did!  The painting on the wall is one my mother did back in 1984, and she gave it to my second cousin, who regifted it to me just recently!  The frame needs some work, but I love the picture.  Mom was just learning to paint. There is a guy at Old Ranch who owns an upscale framing business so I plan to send it there for his magic touch. I love old memories. 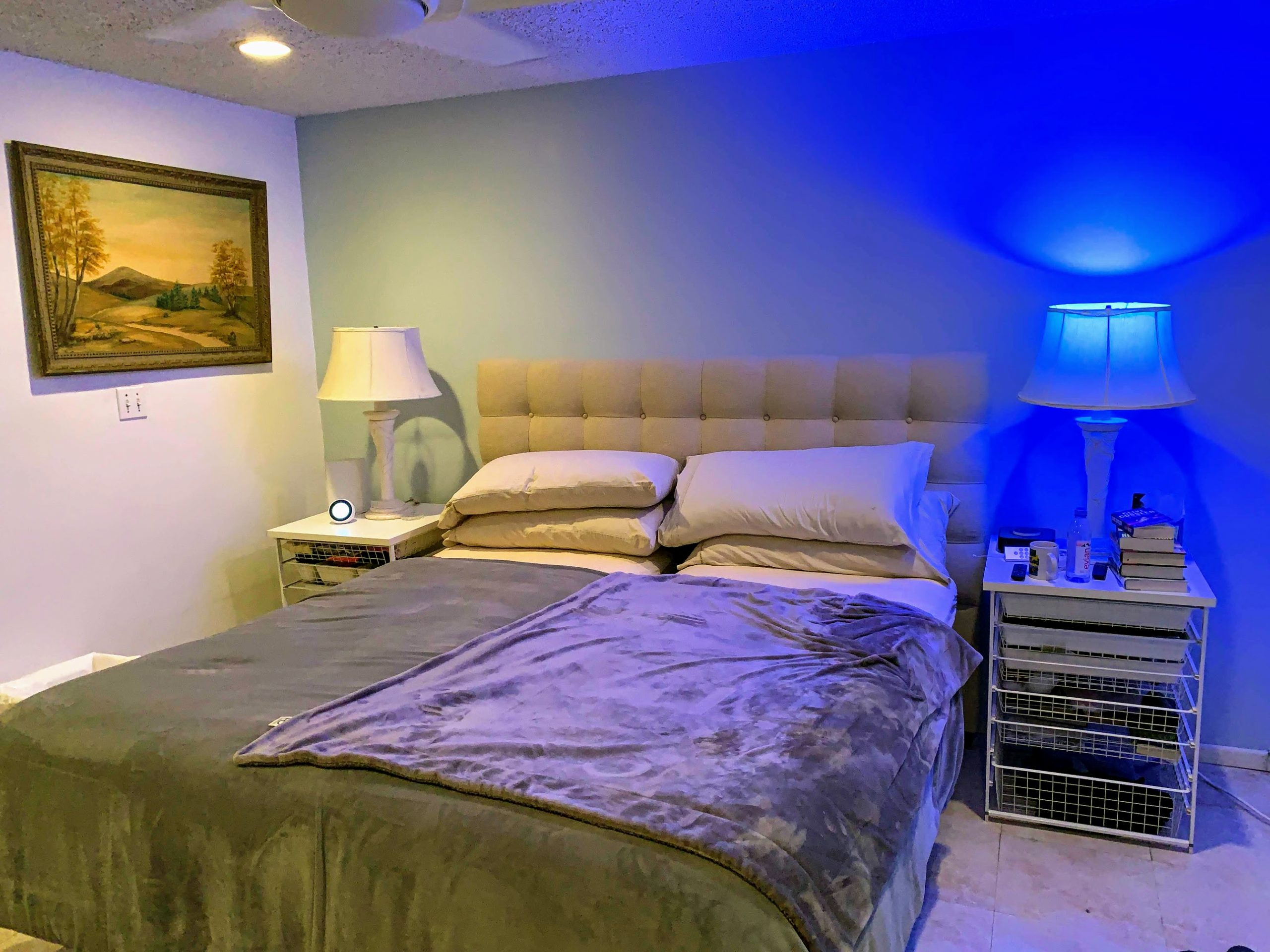 I can get used to this!  Perhaps a sea-scape is needed above the bed!

The color is Sherwin-Willians “Caught In The rain” and it looks like this: 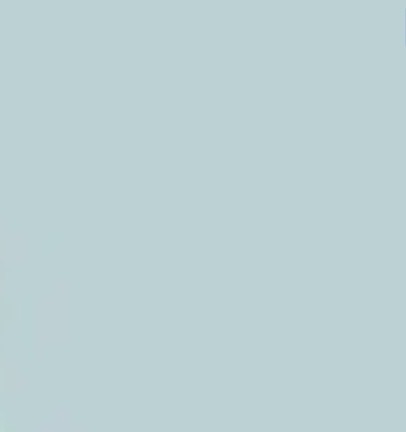 Amazing names for their colors!

Now it is time to sing happy birthday to Joe using Zoom,  The family is together and the singing is “loud”.  We talked amongst ourselves for 45 minutes laughing the entire time!  We need to have Connor join us next time, Michele was not available and Jon was crashed as it was 10:00 PM back east! 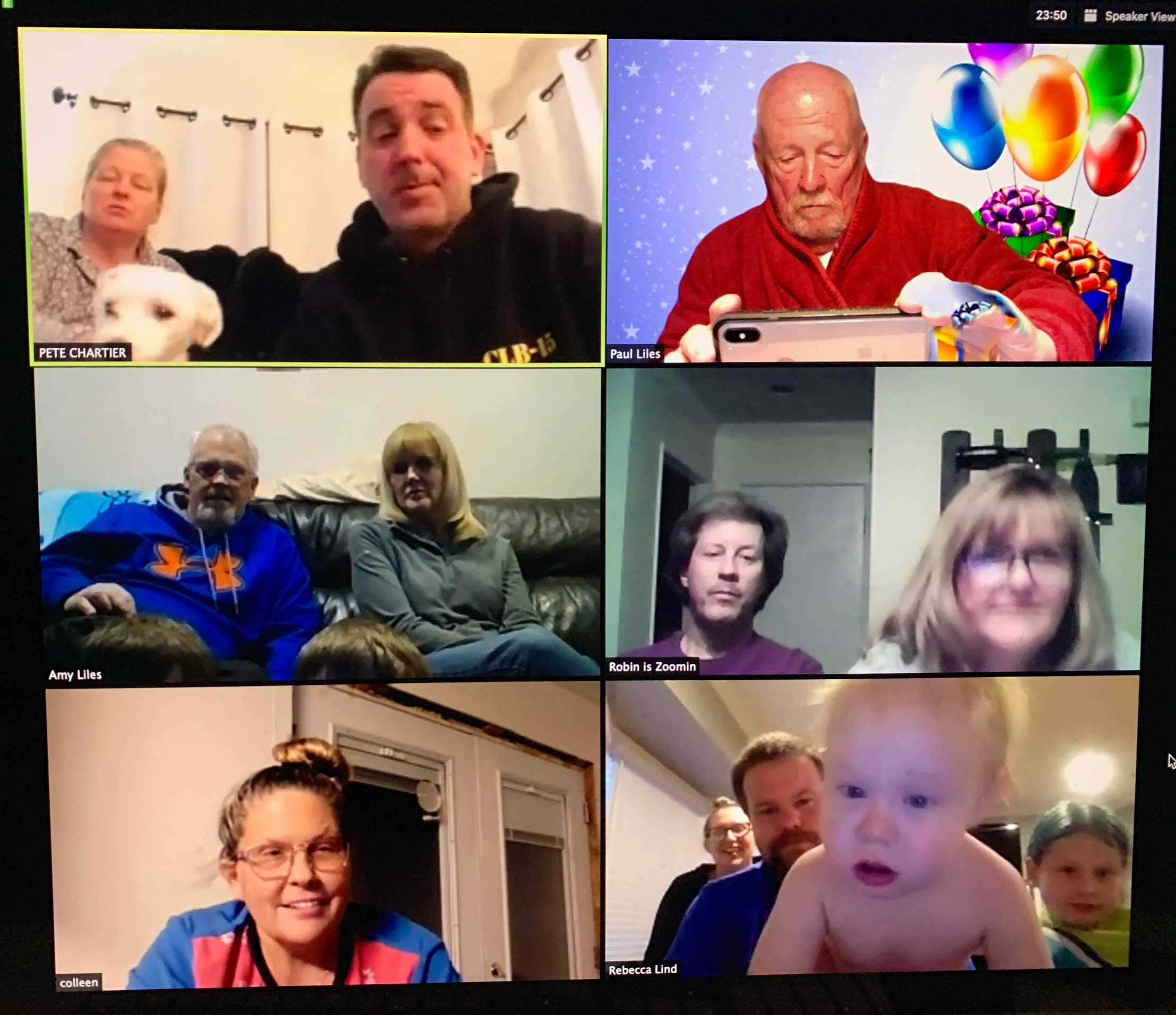 I love my family; the kids and grandkids are just amazing!

To better understand part of what is going on you can listen to 60 seconds of our interaction!

From left to right, top to bottom:

Pete and Lisa just got home and were about to fix dinner.  See Toby?  He does not bark these days.    Yours truly acting as the MC and official kibitizer!

Joe and Amy sitting on the couch and the two bundles of hair are Charlie and Alex, they pop into the picture at the appropriate times.  Bob and Robin enjoy all the family get-togethers.

Collen is by herself as Mark had hit the sack, it was 10:30 PM on the east coast.  The Linds had Remy being the ham!  We got to see Lilly’s Easter Basket (and all the contents). 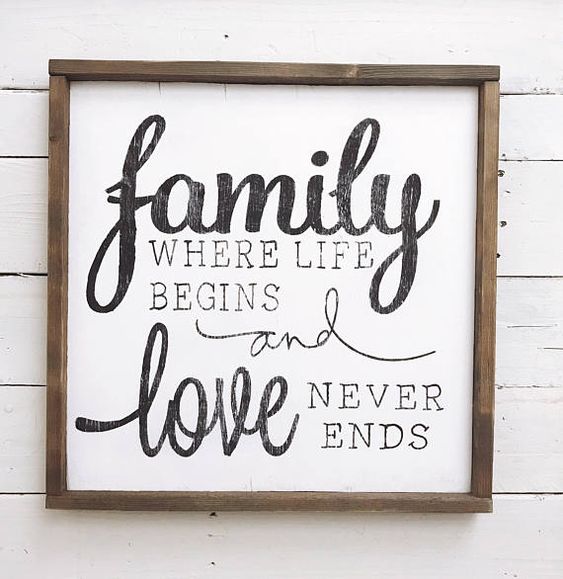 Time for some TV before crashing; a nice cup of coffee or hot chocolate is in my future!

Just an old retired guy trying to finish out my last years on this planet. I lost my best friend and wife in early 2020. I was blessed again by reconnecting with Dr. Mary Côté, a long-time friend. Mary and I got married July 28th, 2021, and are enjoying life together and plan to spend the rest of our lives being a blessing to our friends and family.
View all posts by Paul →
This entry was posted in Cooking, Dancing, Family. Bookmark the permalink.