Night At The Tropicana

We joined our friends for a “Night At The Tropicana” at the Santa Ana Elks Lodge. Vince and Nancy, Del and Vicky, Jan and Jim and the rest of the usual suspects!  A great time was had by all! Join for a fun evening. 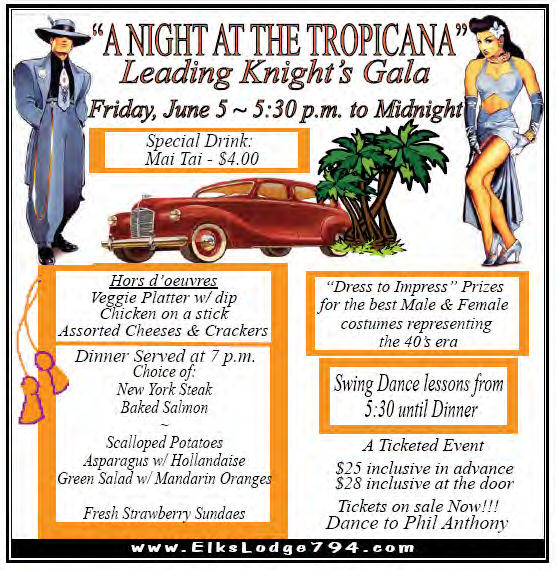 Night At The Tropicana

Did you know? – Tropicana is a world known cabaret and club in Havana, Cuba. It was launched in 1939 at Villa Mina, a six-acre (24,000 m²) suburban estate with lush tropical gardens in Havana’s Marianao neighborhood. The spectacular showplace that became The Tropicana evolved out of a Depression-era bohemian nightclub called Edén Concert, operated by Cuban impresario Victor de Correa. One day, two casino operators approached de Correa about opening a combination casino and cabaret on property on the outskirts of Havana rented from Guillermina Pérez Chaumont, known as Mina.

The operators felt that the tropical gardens of her Villa Mina, would provide a lush natural setting for an outdoor cabaret. They cut a deal, and in December of 1939, de Correa moved his company of singers, dancers and musicians into a converted mansion located on the estate. De Correa provided the food and entertainment, while Rafael Mascaro and Luis Bular operated the casino located in the chandeliered dining room of the estate’s mansion. Originally known as El Beau Site, de Correa decided to rename the club Tropicana, because of its tropical atmosphere and “na” after the last syllable of the original owner, Mina.

With a fanfare from the Alfredo Brito Orchestra, the Club Tropicana, opened on December 30, 1939. Its popularity with tourists grew steadily until the outbreak of World War II, which sharply curtailed tourism to Cuba.

Just an old retired guy trying to finish out my last years on this planet. I lost my best friend and wife in early 2020. I am involved seriously with a long-time friend, Mary, and life goes on.
View all posts by Paul →
This entry was posted in Dancing, Food and Wine, Friends, Fun and tagged Dancing, Elks Lodge, Videos, Wine. Bookmark the permalink.