Friday And Mary Has A Half-Day Schedule! Yes!

Why aren’t zombies ever arrested? They can’t be captured alive.

Halloween is almost here; how about a bit of music to get you into the “spirit”?

We finally got up at a reasonable le time, 6:00 AM.  Mary headed for the shower, and I went into the Family Room and sat with Robin, where we plotted the rest of the holiday season!

I started the fireplace, and it looks pretty good, and it puts out heat; what a bonus!

After Mary and Robin departed, I went to work around the house doing chores like cleaning up after last night’s dinner, doing the wash, getting wiring ready for a driveway light, walking Scout, etc.  I kept busy!

When Mary called while on the way home, I was so tired that I decided to offer lunch at Rockwell’s, Mary did the top sirloin salad while I had my regular, the Paper Boy Sandwich! 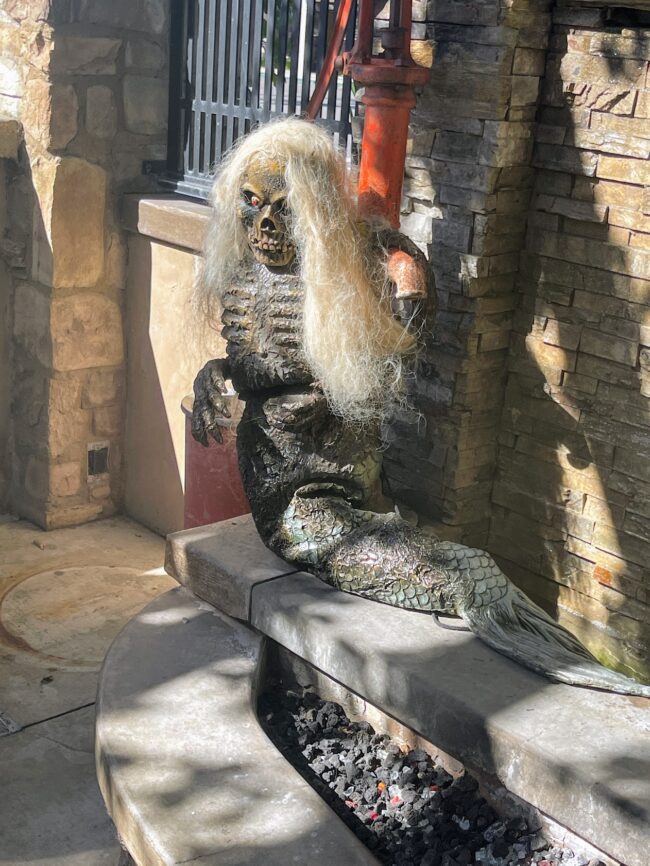 We think she just crawled out of the fountain.

The new person was a little too close for comfort, so we moved to the other end of the table; she looked hungry and kept looking at me! 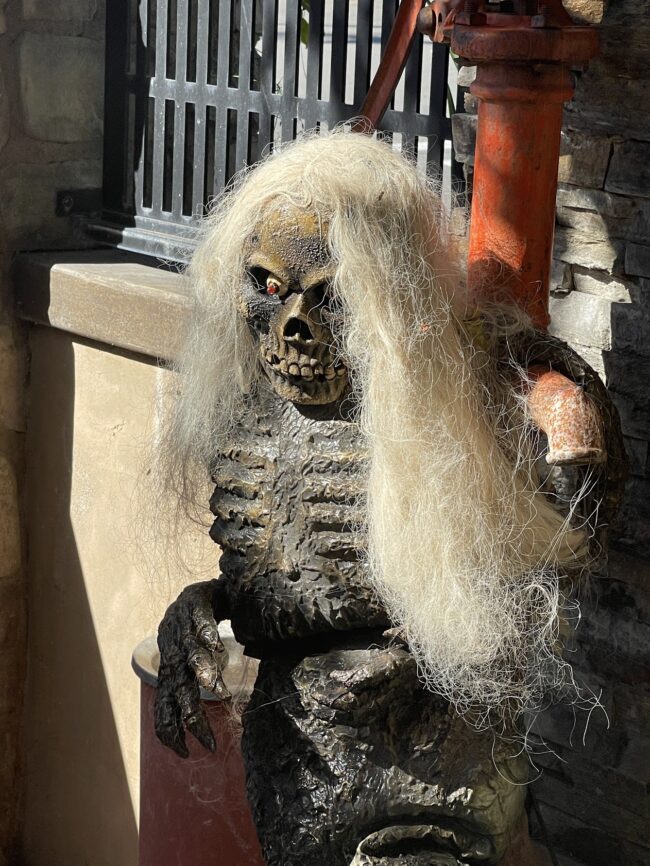 We did give her the number of a dentist!

Rockwell’s had several new clients posted around the store. Bones here played a mean guitar, a little loud but acceptable. 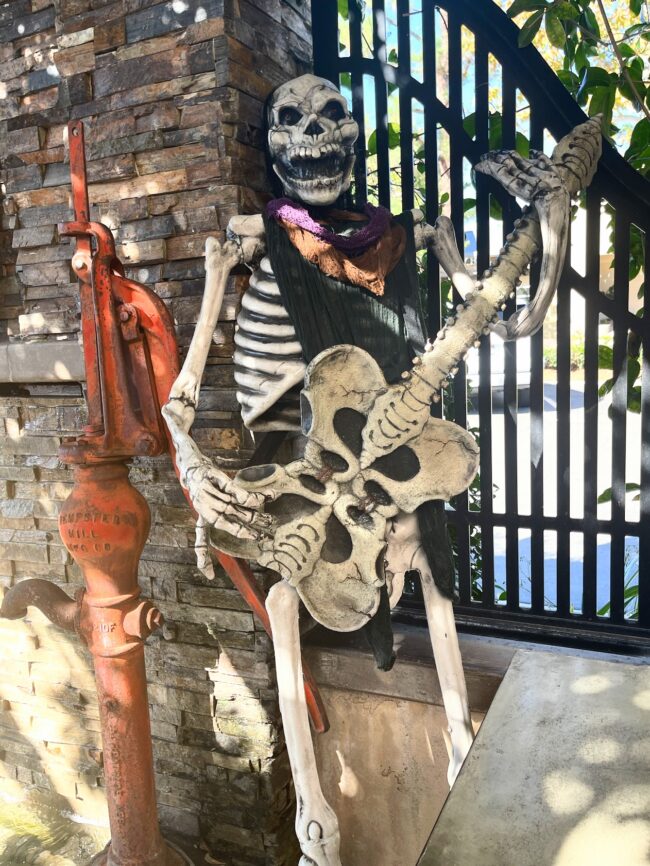 We went over the Elks Halloween Costume Party attendees and had one remaining seat in case of an emergency; well, Vicky decided to go!  Yeah, all seats were taken, and twenty-four of us will have a ball! 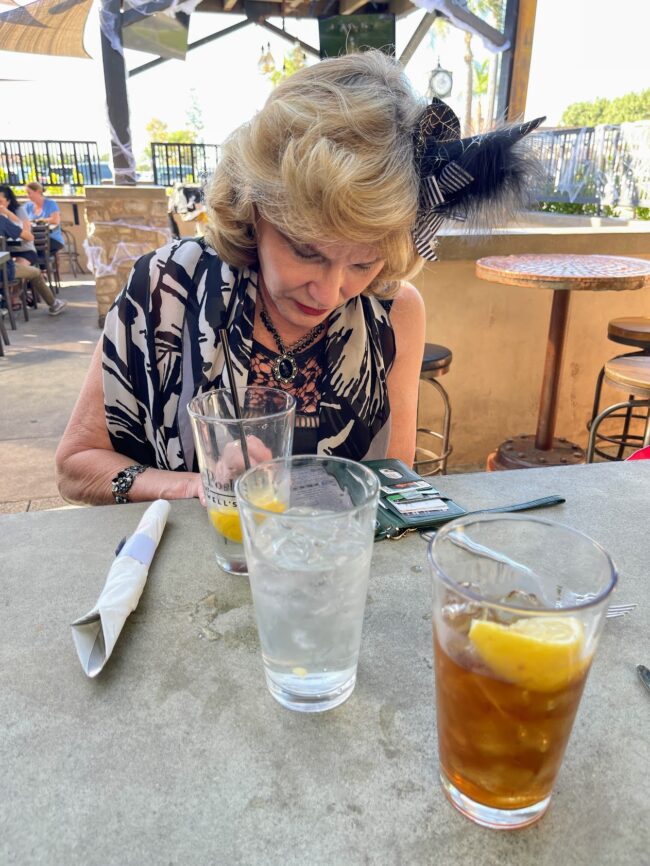 Final coordination for our Halloween party got underway when the iced tea arrived.

We stopped at the market for last minutes supplies and then headed home (a whole 1.8 miles), so we could go back to work. I washed a pealed a ton of goodies while Mary finished off the spiders! Veggie man must rise from the garden. 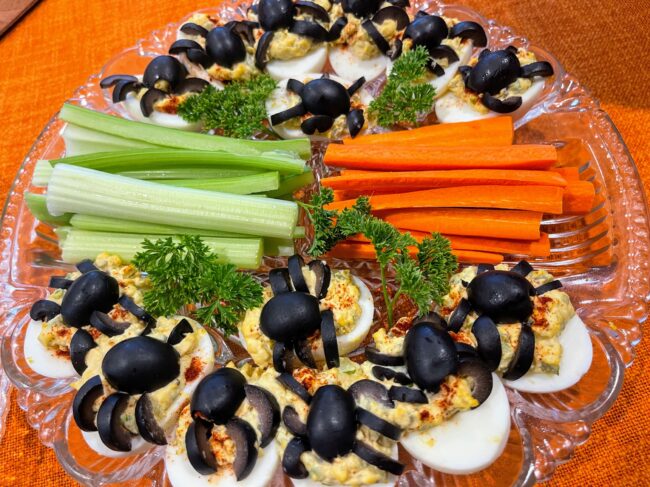 We carefully put them away in the outside frig for fear they would get loose and come inside and wreak havoc!

We were going to buy exotic spiders from the pet shop; then we realized we could get one cheaper on the web. 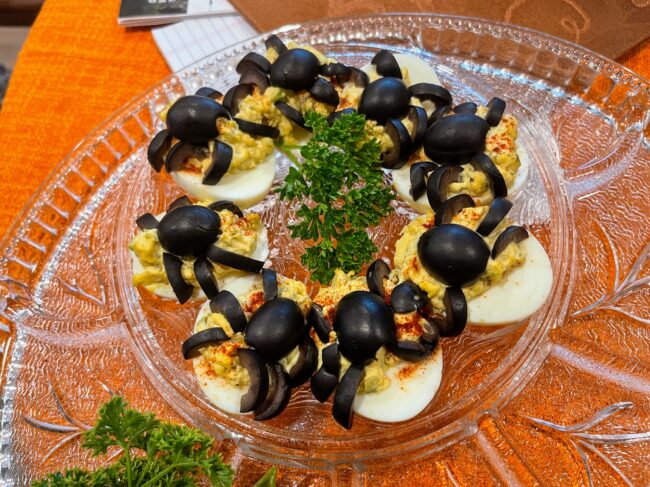 Who will be the first to bite into a biter?

I saw a spider on my computer keyboard earlier, but not to worry. It’s under Ctrl.

Mary, our resident surgeon, operated. I assisted by washing and peeling, dicing, slicing, and creating the necessary ingredients. Mary found “Veggie Man” in a book and had been studying it for weeks now. I cut her just short of creating a monster.  When she asked me to fly a kite and then connected the wired to the pickles in his neck, I said, “No way, José.” 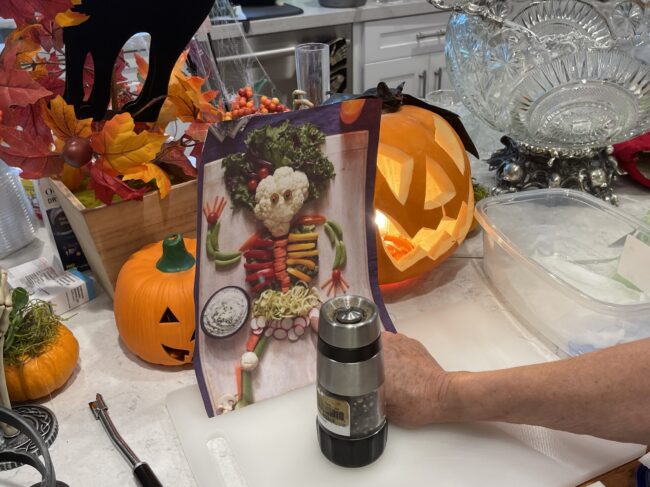 The perfect hard-boiled egg!  Where does it go? 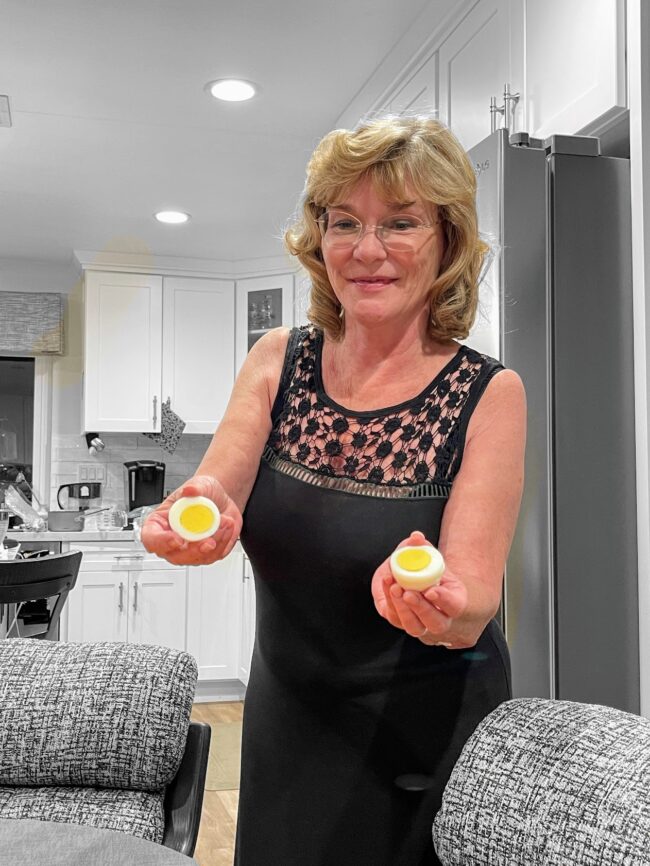 We worked for two hours.

Just like Frosty The Snowman, he came alive.  Unfortunately, he was pickled and could not walk! Speaking of pickled, it was 9:00 PM before we shared our first glass of wine! 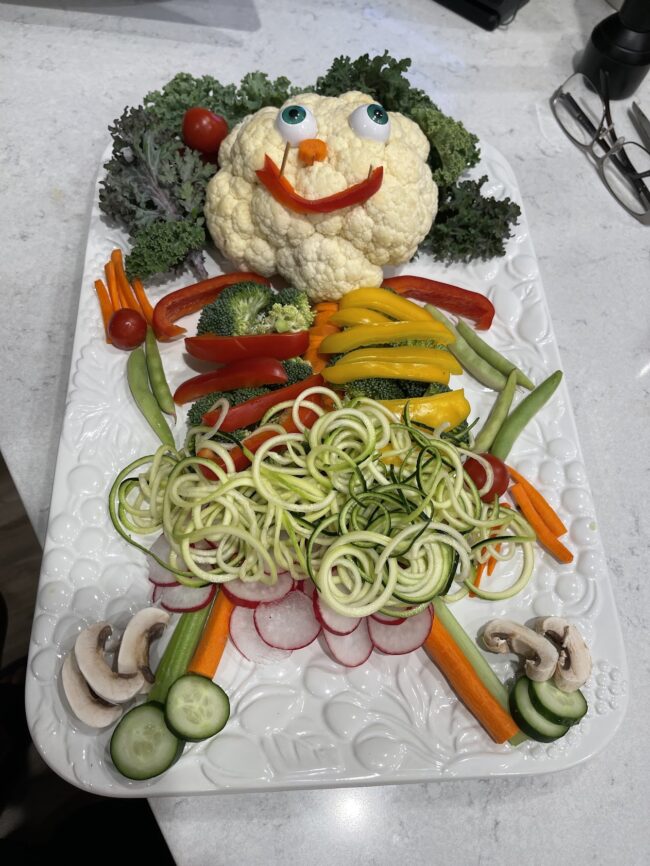 Veggieman is now ready to be served.

The hero of the evening!  Tomorrow ought to be an excellent time for the family to all be together and chop up the pumpkins! 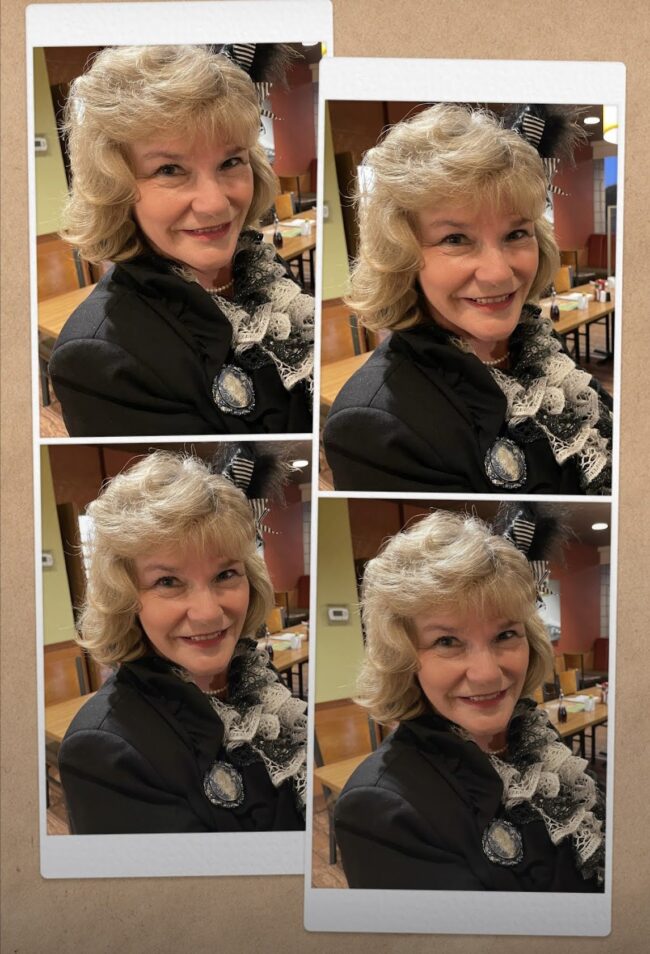 She worked and then came home and worked!

It was early, and I decided we would watch “A Summer Place,”; a pretty risque movie for its time.   While we dined, we had artichokes and shared a cup of miso soup from last night. 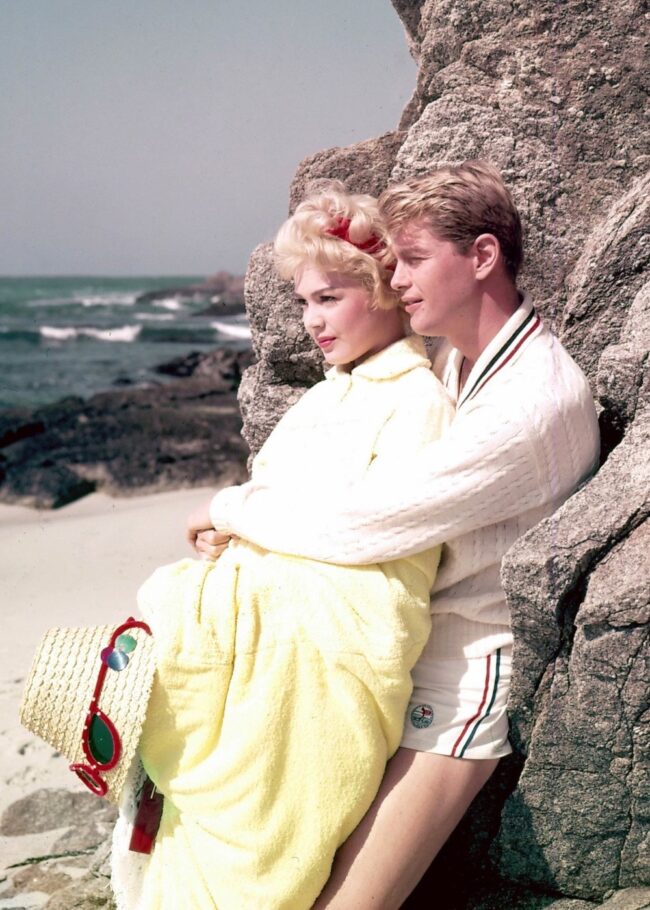 Interesting note: The movie was released in the 1960s, but the csars were all last 1940s!

Did You know? A Summer Place is a 1959 American romantic drama film based on Sloan Wilson’s 1958 novel of the same name, about teenage lovers from different social classes who get back together 20 years later and then must deal with the passionate love affair of their adolescent children by previous marriages. Delmer Daves directed the movie, which stars Richard Egan and Dorothy McGuire as the middle-aged lovers and Sandra Dee and Troy Donahue as their children. The film contains a memorable instrumental theme composed by Max Steiner, which spent nine weeks at number one on the Billboard Hot 100 singles chart in 1960.

Just an old retired guy trying to finish out my last years on this planet. I lost my best friend and wife in early 2020. I was blessed again by reconnecting with Dr. Mary Côté, a long-time friend. Mary and I got married July 28th, 2021, and are enjoying life together and plan to spend the rest of our lives being a blessing to our friends and family.
View all posts by Paul →
This entry was posted in Food and Wine, Holidays, Just Us, Movies, Working Around House. Bookmark the permalink.