It’s Been Three Months And All Is FANTASTIC!

My wife and I have started aggressively planning for her retirement, and by that I mean we’re playing the lottery 3-5 times per week.

Three months ago we exchanged vows and we are so happy about that!  Time is moving on and we are getting the home in shape for the holidays; we are excited about the holiday season! 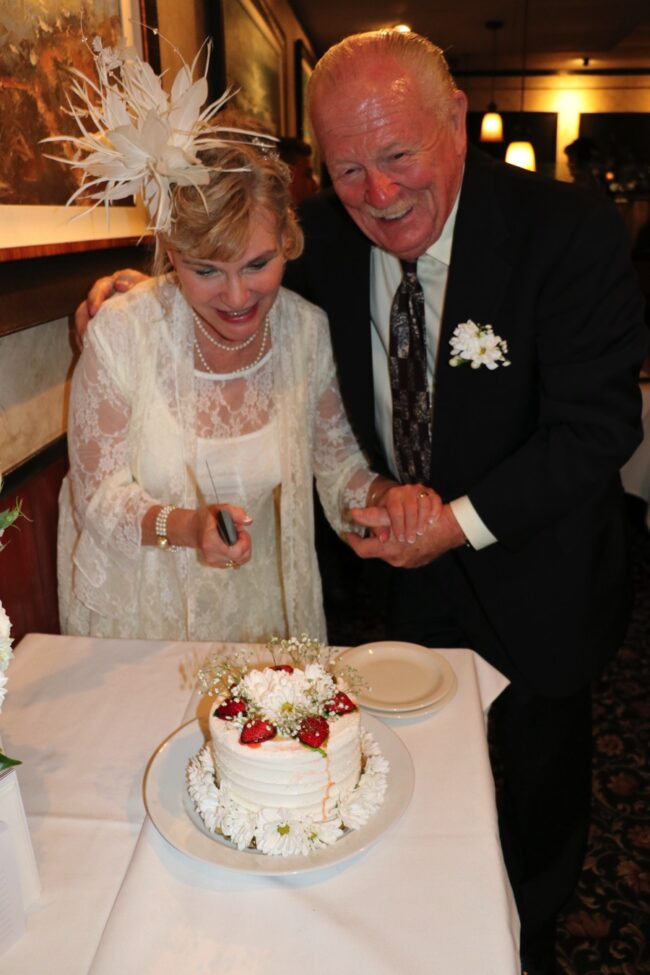 Another 4:30 AM arrives, and we are up and going.  Mary has to be at a Women’s Business Council meeting of Orange County; their meeting is at Denny’s in Huntington Beach on Beach Boulevard at 7:00 AM.  This morning will be the last one Mary will be going to since she is retiring.  Over the years, she has held many offices in that group, including El Presidente!  We are bringing some gift coffee cups filled with Halloween candy as a goodbye gift.

I told Mary that I used to wake up every morning and look through the Forbes list of the richest people in America. If I was not there, I went to work.

6:00 AM, and on the way out the door, we called our daughter and surprised her with the early morning video visit. 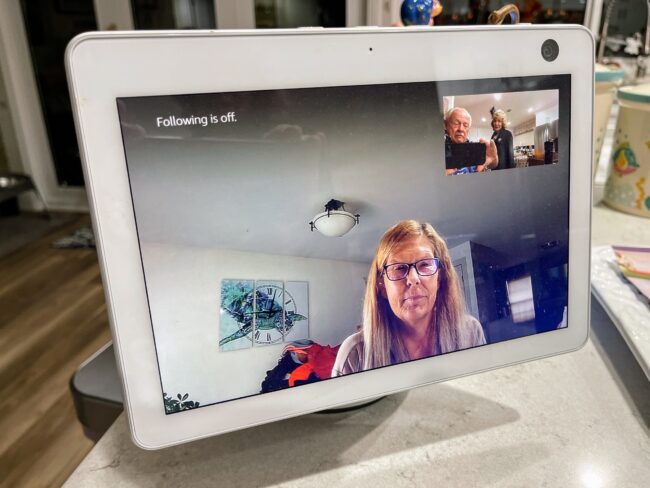 We surprised Colleen by calling so early!

Well, while the ladies did their thing in the meeting room at Denny’s, I did mine!  The Lumberjack Slam was my choice, and I had ninety minutes to get it down.  Geez, what a meal!  Mary used her pumpkin joke; it worked out well! 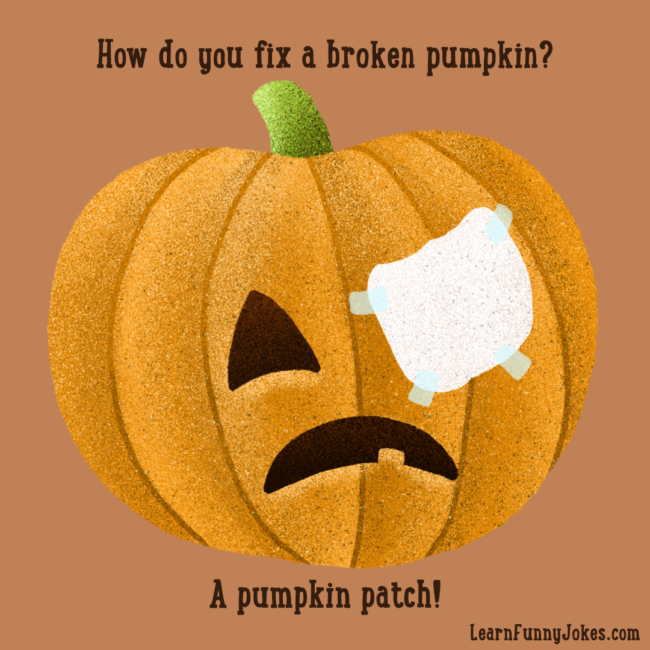 I assisted by bringing in the cups as they were heavy. 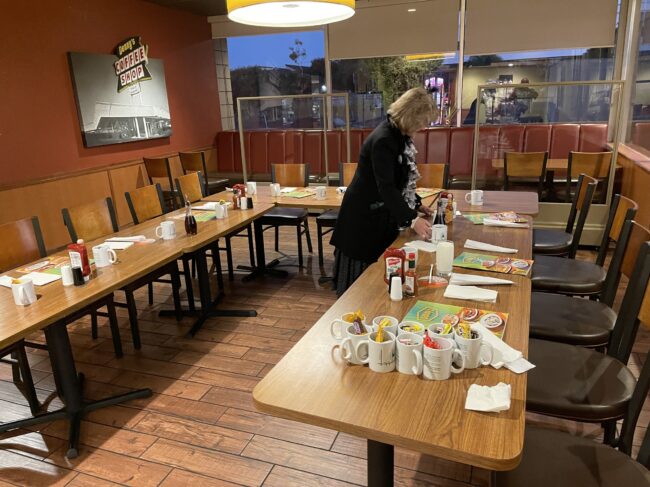 Everyone gets a mug stuffed with candy; you would think she is a dentist!

I procured another piece of iPhone software called “Splash” to control the colorization of pictures.  It seems to work pretty well! 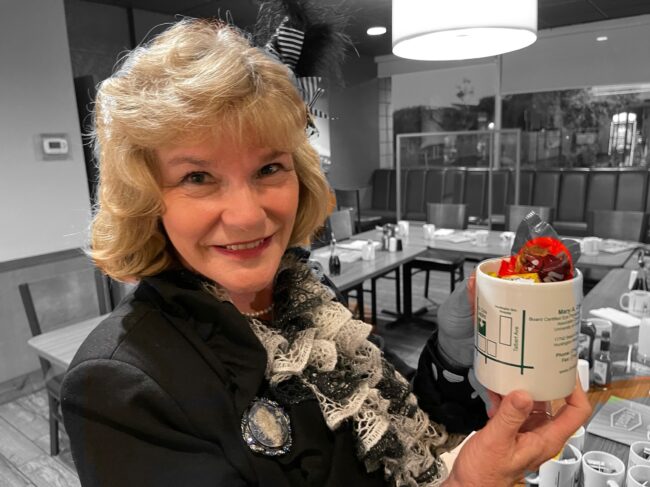 By the time the meeting was over, I had downed a Lumberjack Slam and four cups of coffee.  I was fully wired!  I was so stuffed I could hardly wiggle! 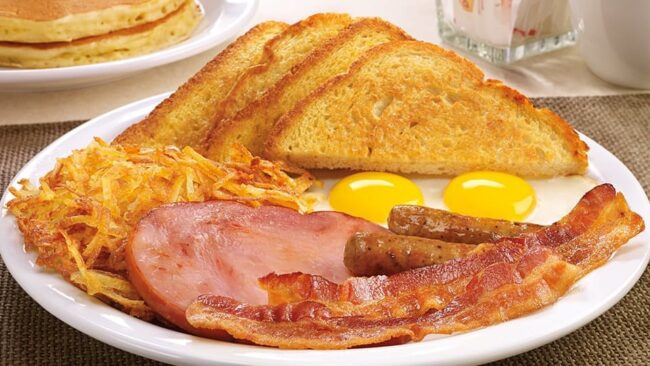 …and it comes with two huge pancakes!

We departed Denny’s and headed to Mary’s office to drop off some mugs and pick up a heat mask for my eyes.  We visited for a few minutes before heading home to get Scout for this appointment with the Vet!  Scout got his walk which means, we walked Five Miles!

At the Vet, Scout was getting his ears checked and getting groomed for the party on Saturday.  Scout does make a big deal after the grooming visit; he stops walking and begins prancing! 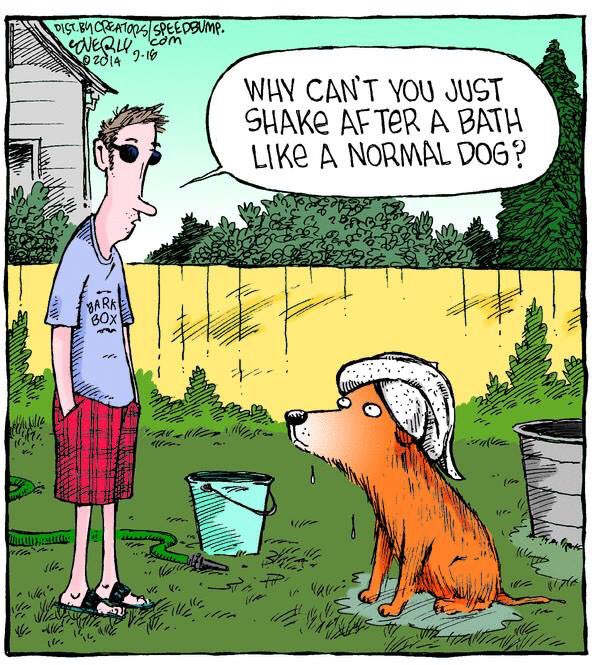 From the Vet, we stopped by The Salvation Army and Goodwill looking for hand mixers.  We do not need a mixer, but we do want the beaters to attach them to an electric drill and clean out the punkins!

Now it was time for Girls Night Out at the Elks.  Mary and I shared a tri-tip steak and Swordfish!   We also managed to down a glass of wine while we were visiting everyone.

Returning home, the Santa Ana’s had kicked up, and the flag was waving.  No people can see the writing on the flag! 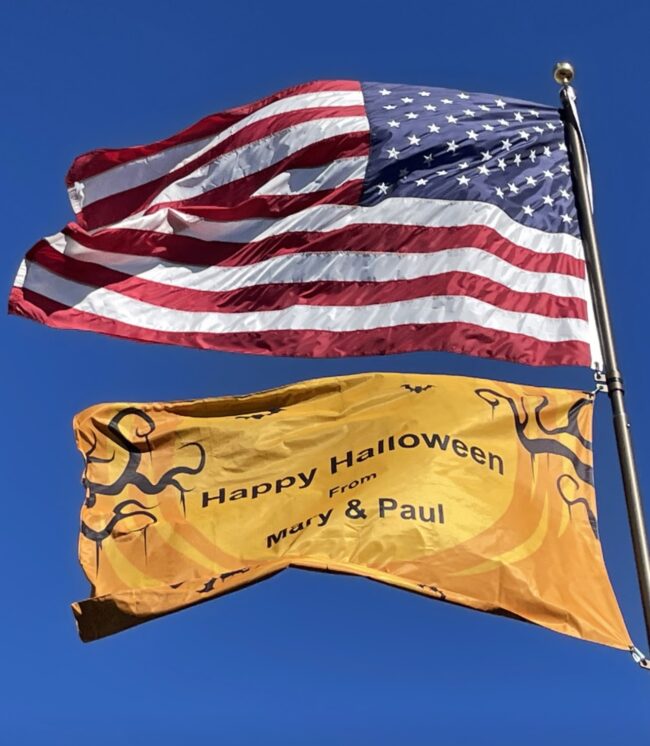 The flag is excellent; we have ordered more!

We retrieved Mr. Scout on the way home, and he was purdy!  He knew he was purdy! Scout was hoping the Vet would be at the party on Saturday so he could introduce his friends to her! That is one intelligent dog. 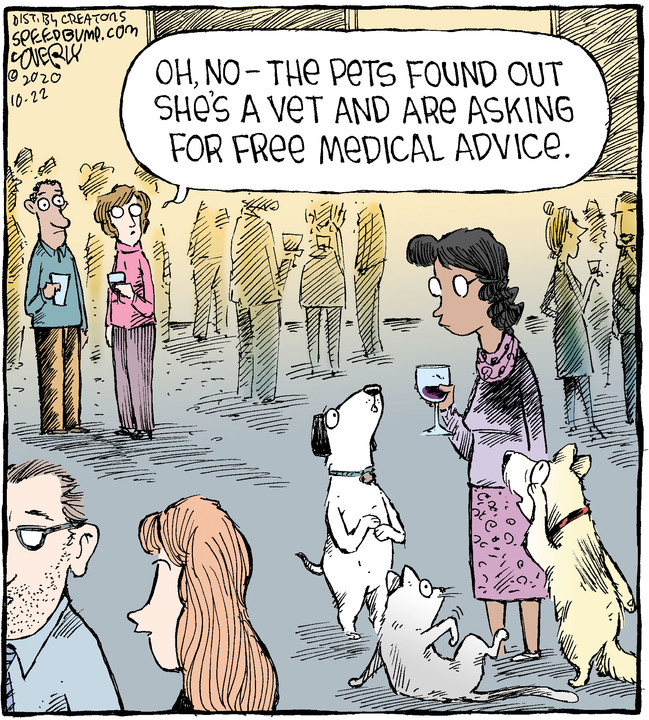 Scout! You know better than that!

Robin joined us this evening, which is always a pleasure.  We fixed a Korean dish where we put our meat and veggies in boiling chicken broth.  The meal was quite good and certainly something we had not tried at home before. 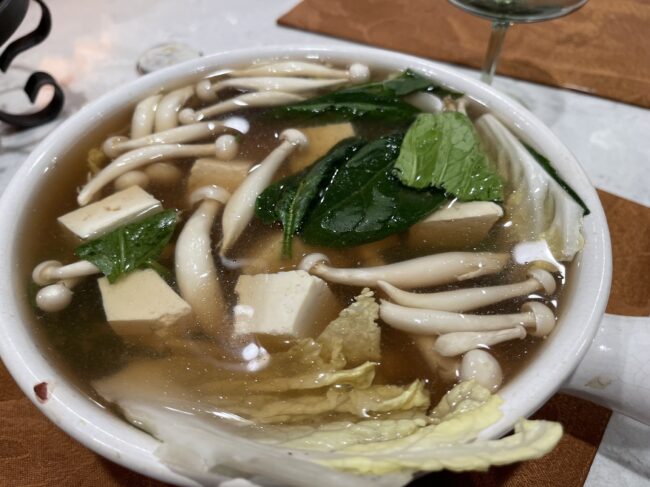 Dinner was served; from the Korean market.

We made the famous Korean drink to go with the meal; Margaritas! All had great fun! We made a big batch of drinks and downed them as the Korean food was consumed. 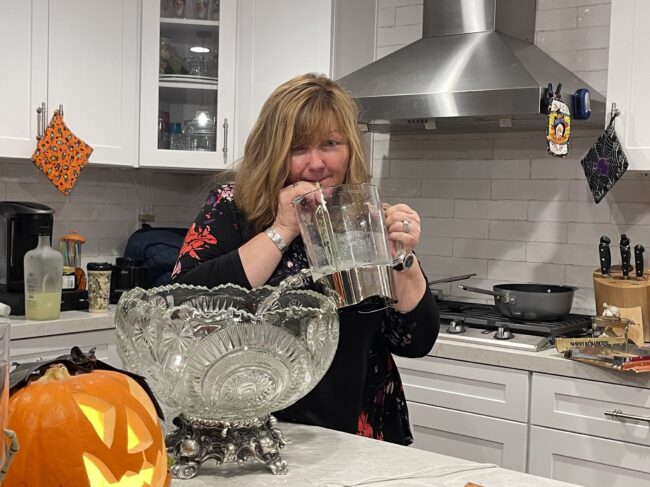 Slurp; the margaritas go down!

We called Jeff, our neighbor, and told him to be prepared for an invasion.  Robin, Mary, and I headed over with drinks in hand, and we visited Jeff for about 45 minutes before heading back home to crash!

The flagpole light was on courtesy of Joe.  It looked pretty good, and the Santa Ana winds had finally died down. 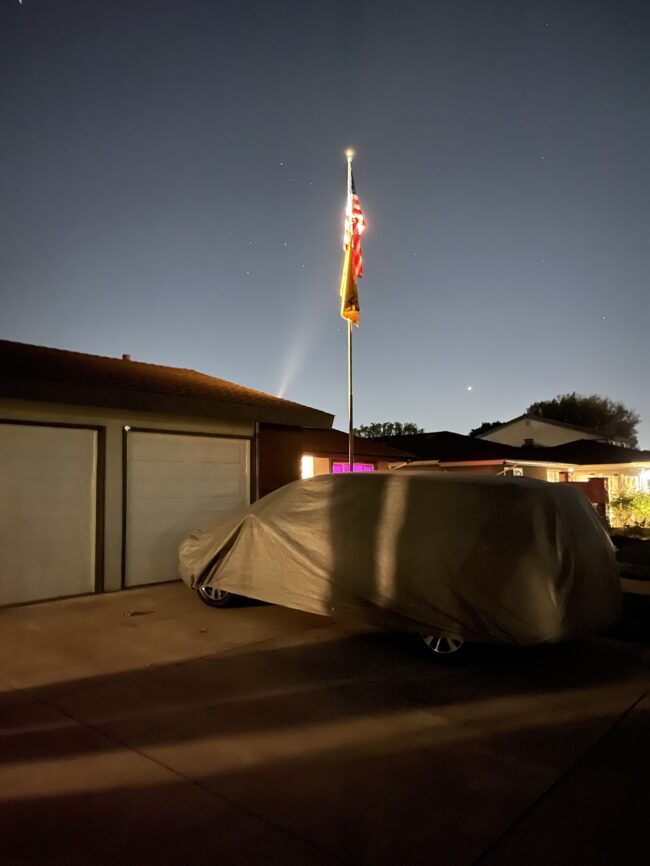 We were heading home after visiting Jeff.

We checked the backyard before hitting the sack, and Scout was on his throne looking out over his vast property holdings.  When I called him to come inside, I got a rude response as he was apparently taking another beauty nap! 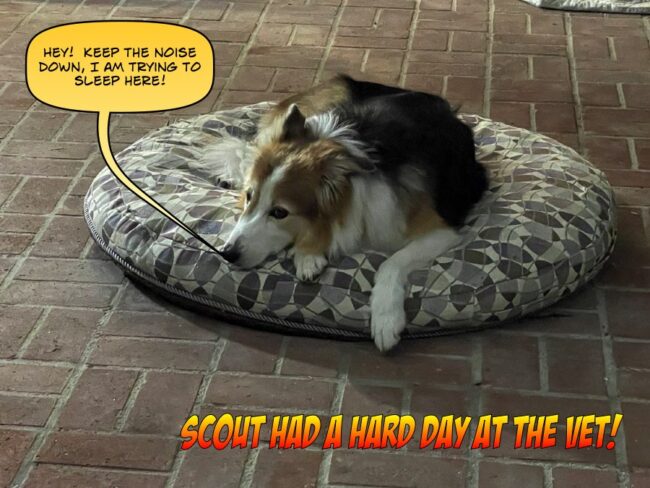 We love our yard, and schools lights stay on all night long, which is excellent!  It was 72 degrees outside at 9:30 PM, thanks to the heat of the day! 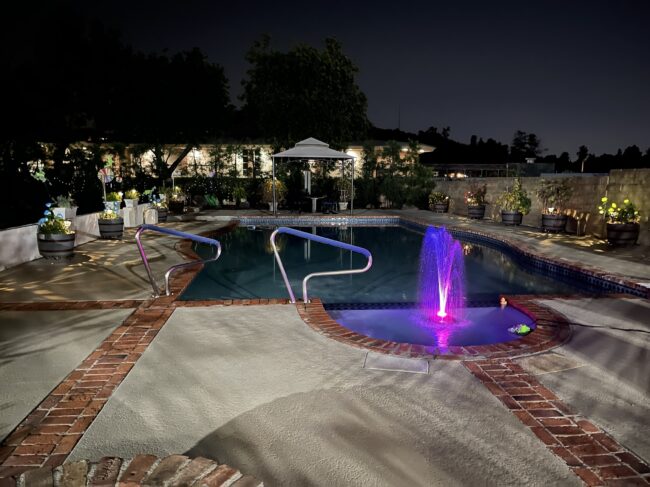 It was a magical evening!

The three of us talked for a while before crashing.  Tomorrow Mary works half-day, and I will be doing errands around the area until she arrives back home.  We will put the finishing touches on the party plans this afternoon and then we begin worrying about Thanksgiving. 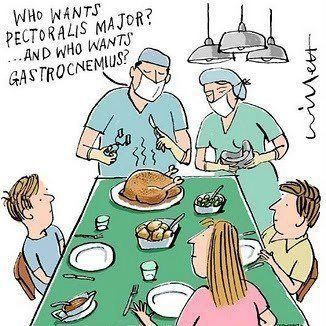 Mary asked if she could carve the turkey this year; we do have some minor questions!

Just an old retired guy trying to finish out my last years on this planet. I lost my best friend and wife in early 2020. I was blessed again by reconnecting with Dr. Mary Côté, a long-time friend. Mary and I got married July 28th, 2021, and are enjoying life together and plan to spend the rest of our lives being a blessing to our friends and family.
View all posts by Paul →
This entry was posted in Family, Just Us, Working Around House. Bookmark the permalink.