Bob Saves The Day So We Can Play (And Celebrate)

Bob: You and I are more than friends. We’re like a really small gang.

Robin wanted to do something special for Mary’s birthday, so she and Bob got tickets to Disneyland.  It was the first time I had been there since Christmas Eve 2019.  Mary had not been there in over ten years. I mentioned to Mary, “Disneyland. The world’s biggest people trap, built by a mouse.”

How could we do this while the plumbers were tearing up the house, well its a long story!  Bob Z. saved the day came and house sat and supervise the plumber.  He knew about all of the scheduled events and asked if we needed help. Bob and I have been friends so long,  I can’t remember which one of us is the bad influence. 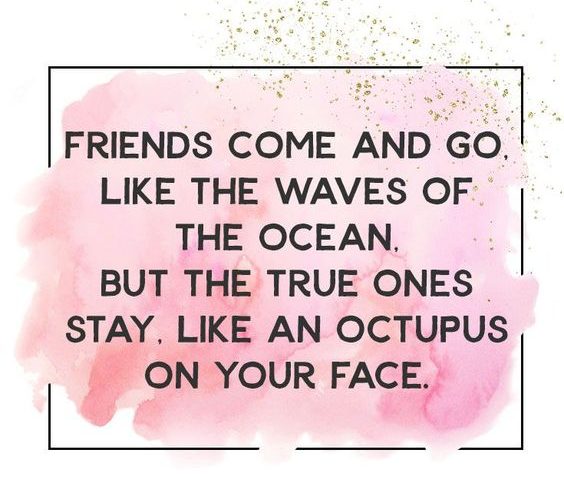 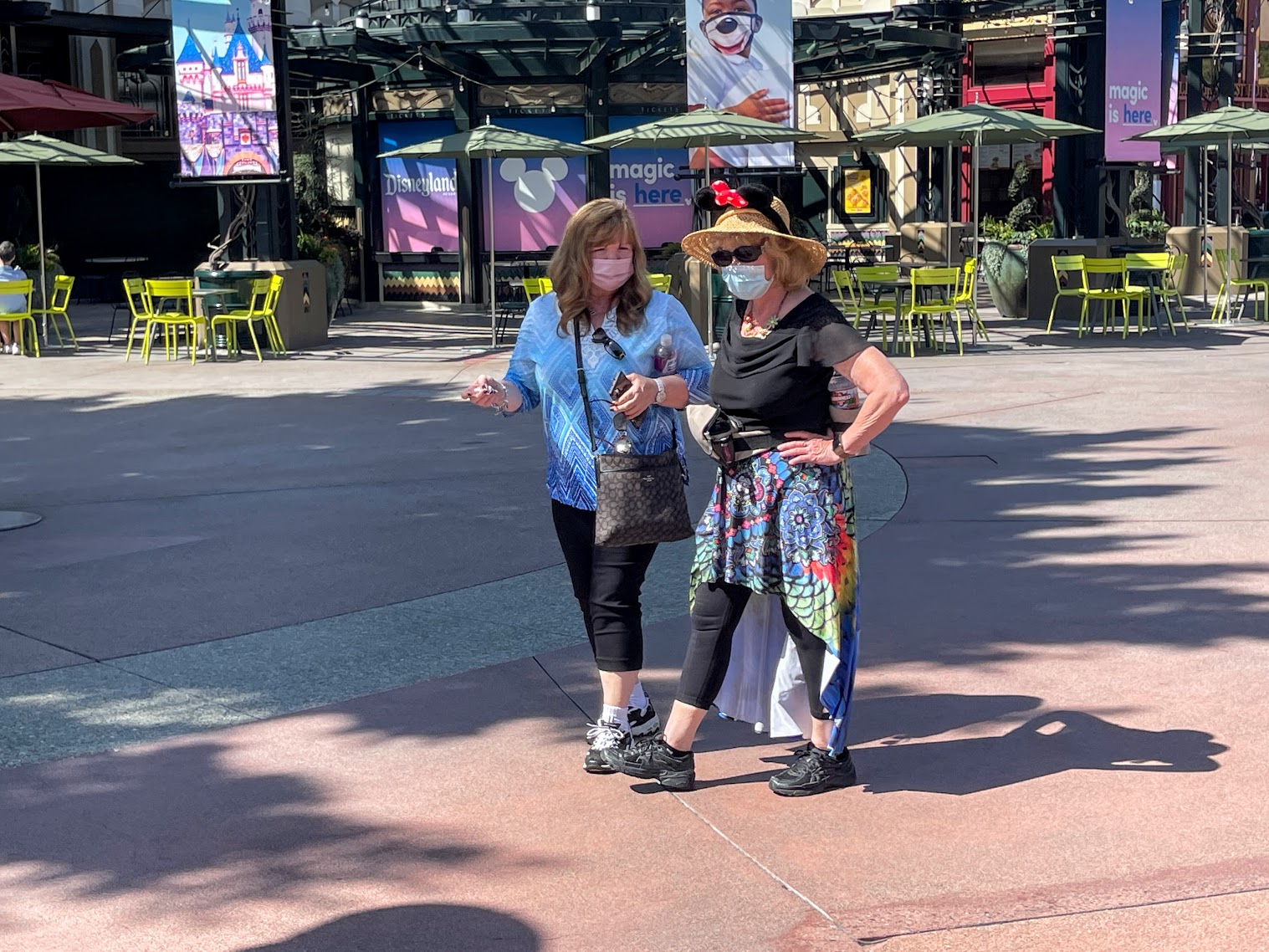 We had quite a hike from the car to Disneyland.

We were on the lookout for changes, and the first major one was that the Rainforest Cafe is gone and the facility is now a Star Wars retail store. 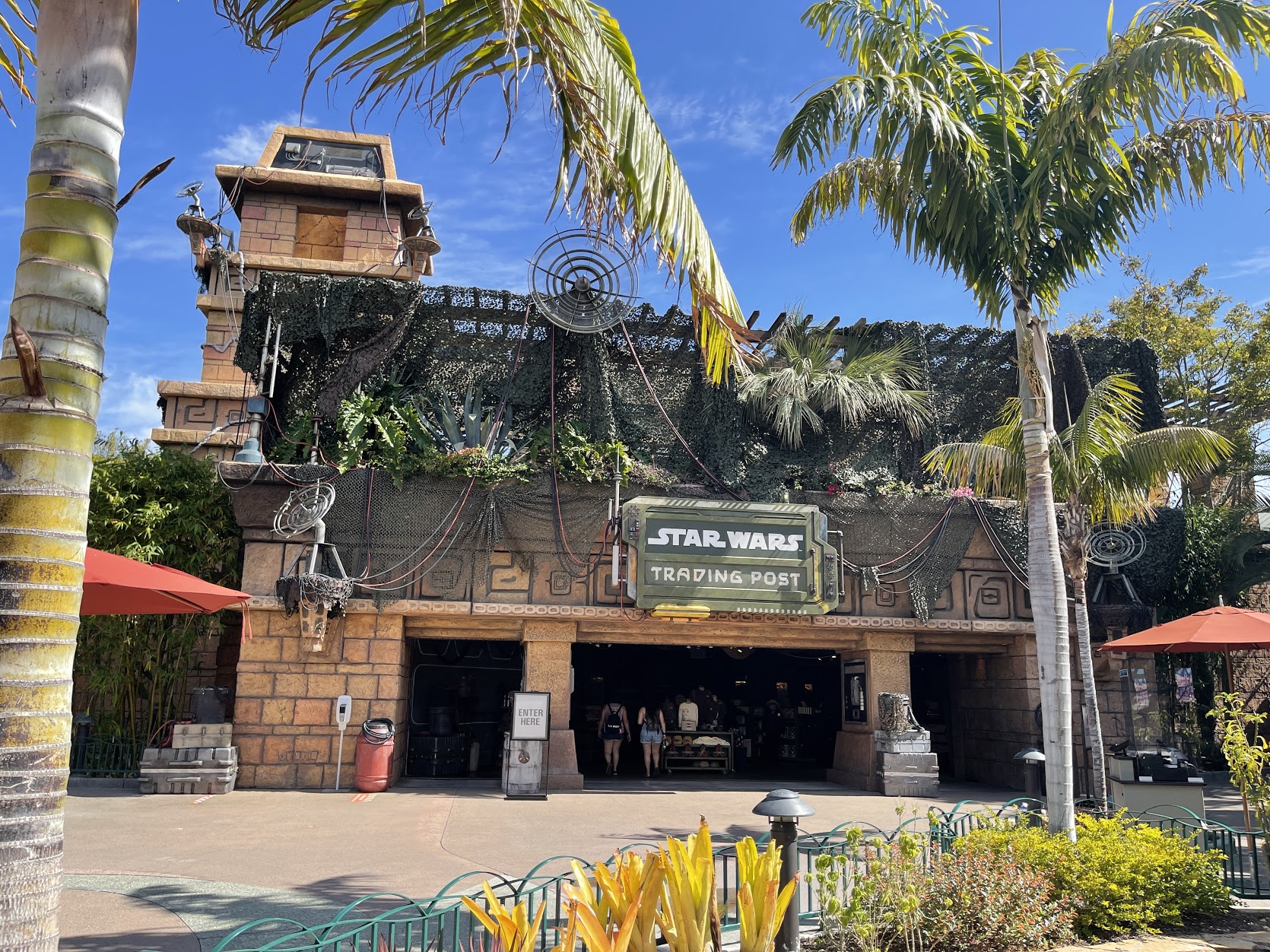 We stopped and Robin shot us with the camera, a dashing couple we make! Mary and me make a wonderful “WE” 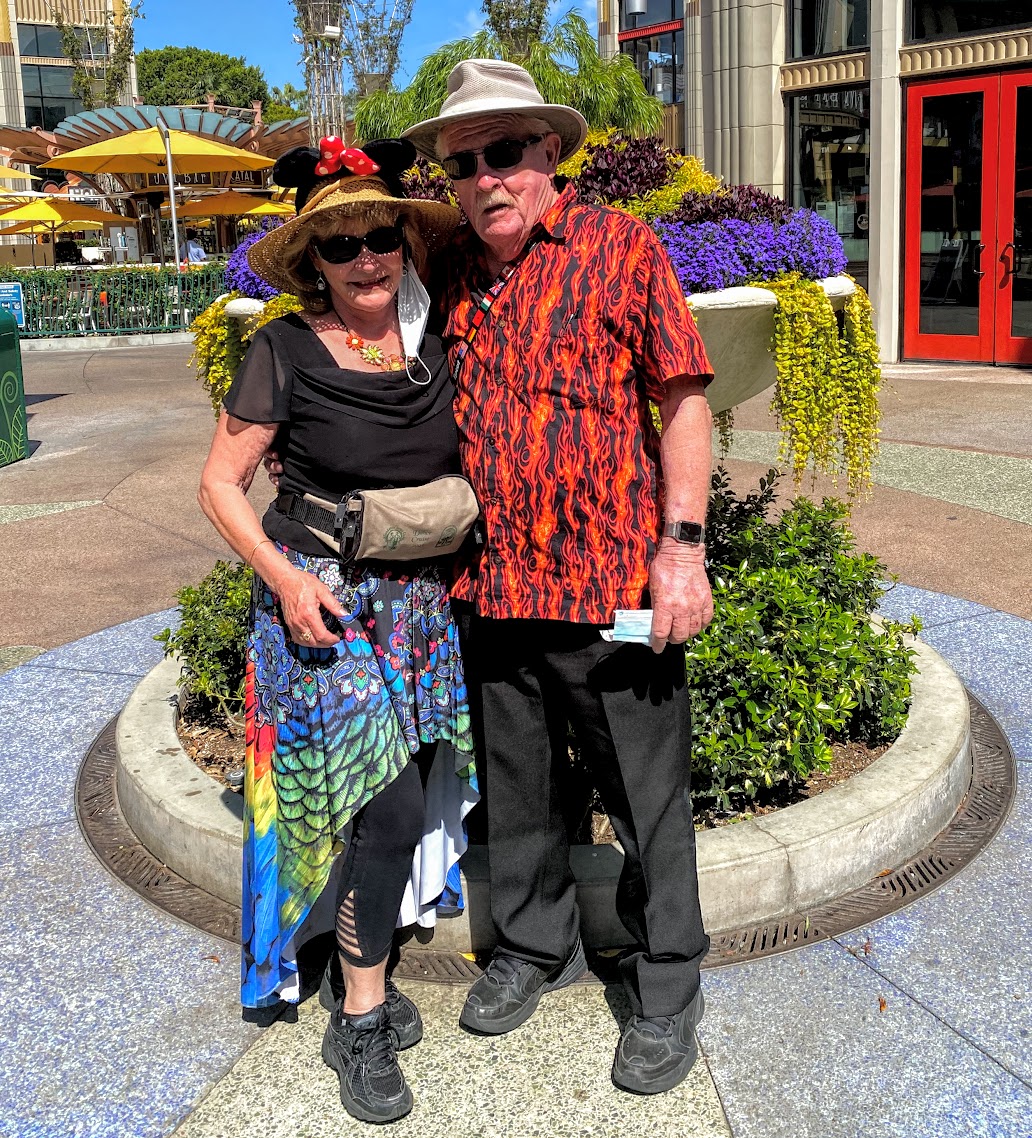 We continue walking towards the entrance to Disneyland.  Remember: Everywhere is within walking distance if you have the time.  I always take a train station shot because I get to know exactly when we arrived at Disneyland.  This morning it was 10:15 AM. 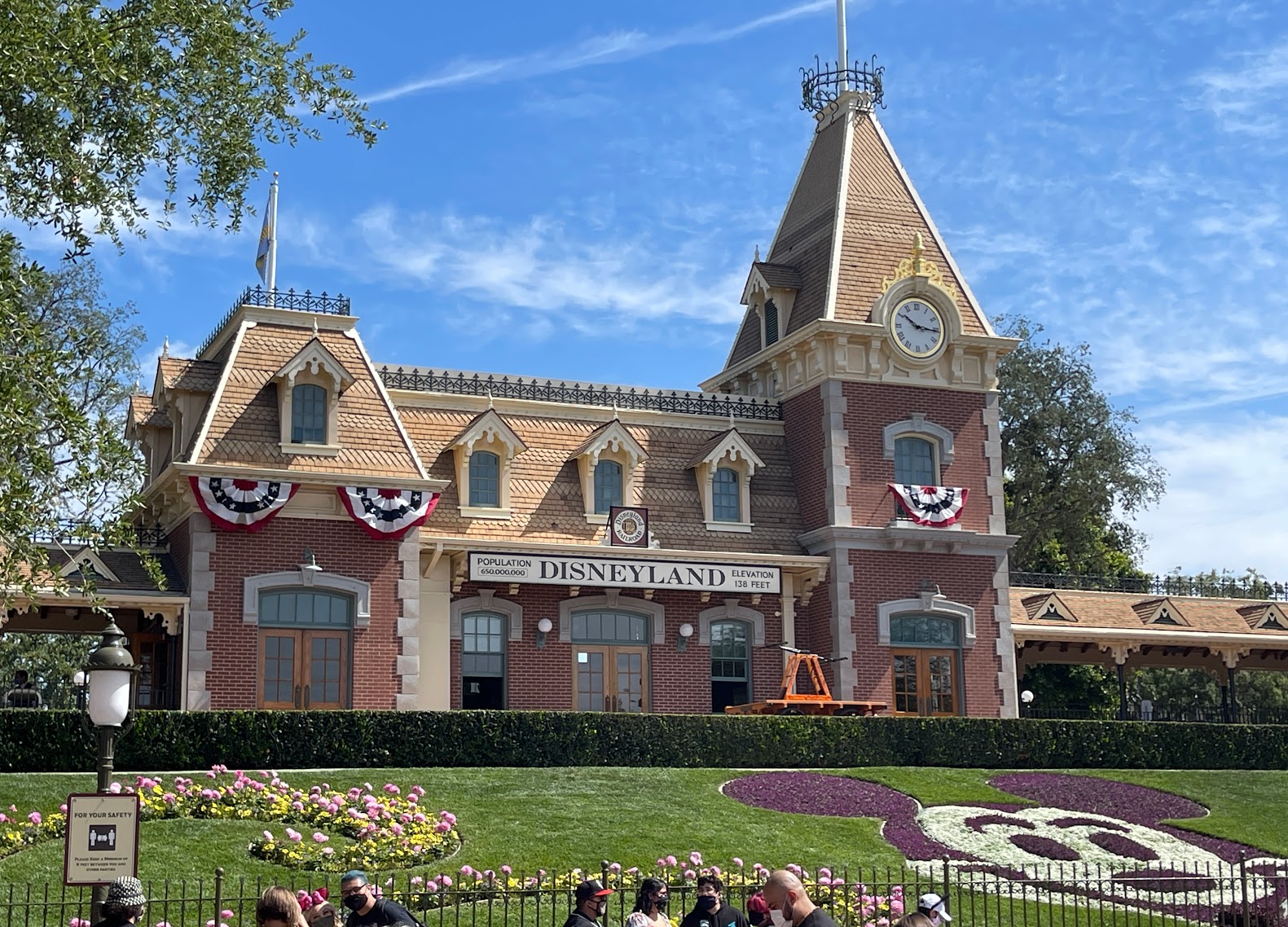 We arrived right on time!

We meandered down Main Street and went to the French Market to get a bite to eat.  It is located in New Orleans and serves a Southern fare withgarden seating area. The day was magnificent, not too warm, and the sun shone on everything, making it radiant.

We did the Haunted Mansion and stopped for a little lunch before heading to Fantasyland.  The mansion line went fast; our wait time was about fifteen minutes. 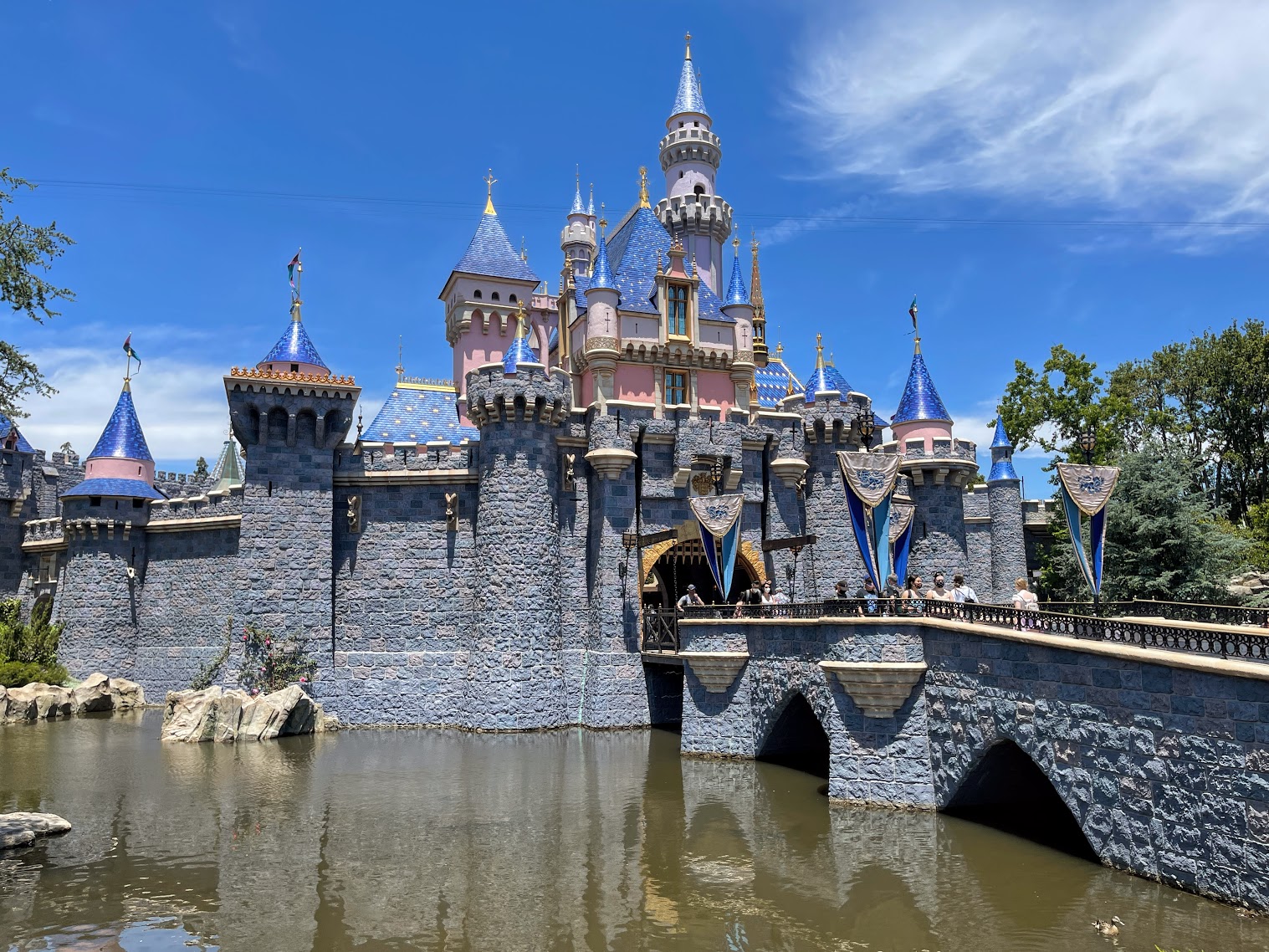 The castle is still beautiful.

The girls needed a picture, so the iPhone comes out, and the selfies begin.  Mary says, “Life isn’t perfect. But my hair is!”   Robin says, “Some people grow up, and I glow up.” 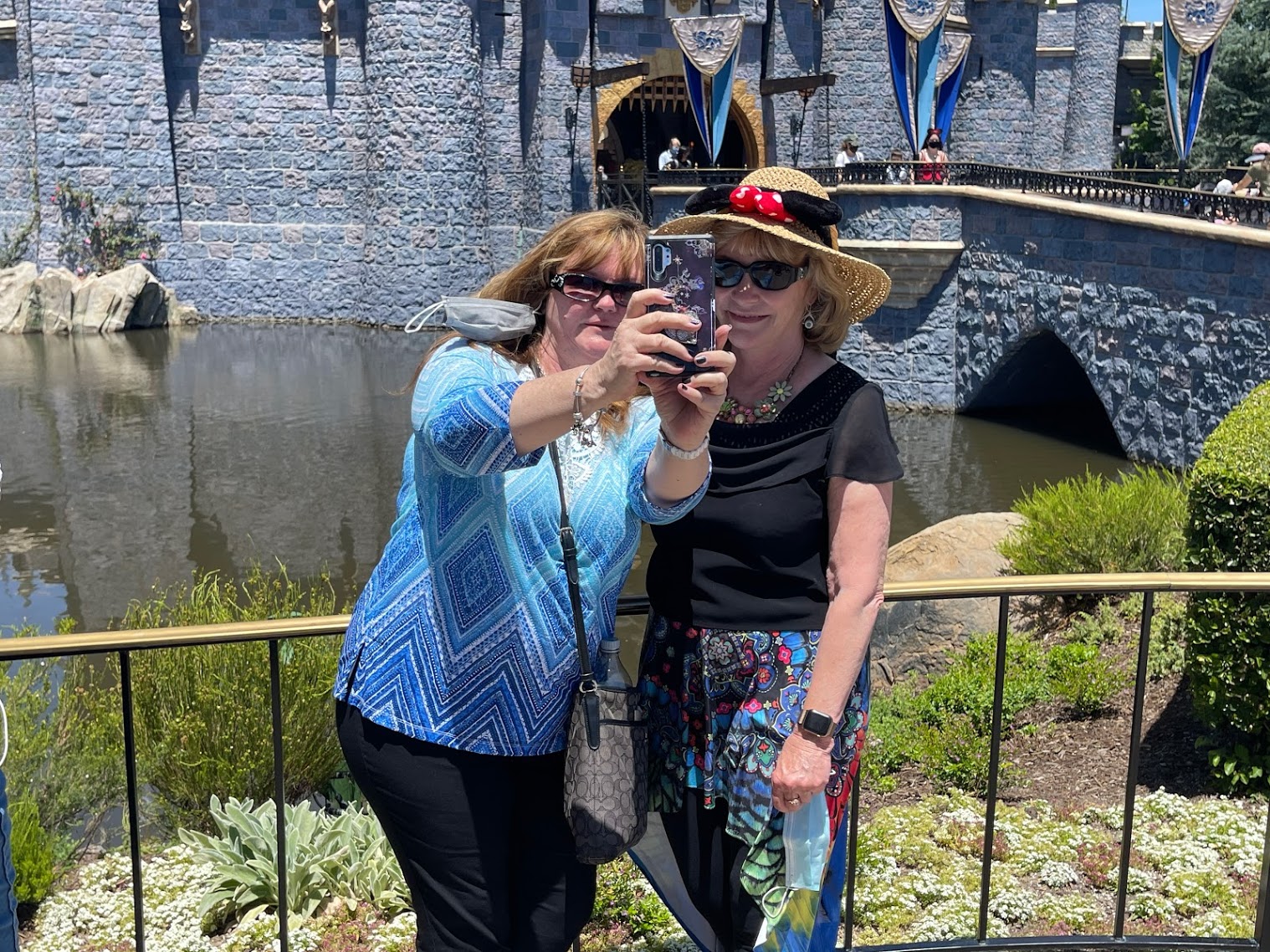 The selfie, a must!

Now that the selfies are over, the serious photographer comes in and saves the day.  Bob and I took some photos of the beautiful ladies.  Paul said, “Why be moody when I can shake my booty?” to which Bob added, “How much do I weigh? One hundred and sexy!” 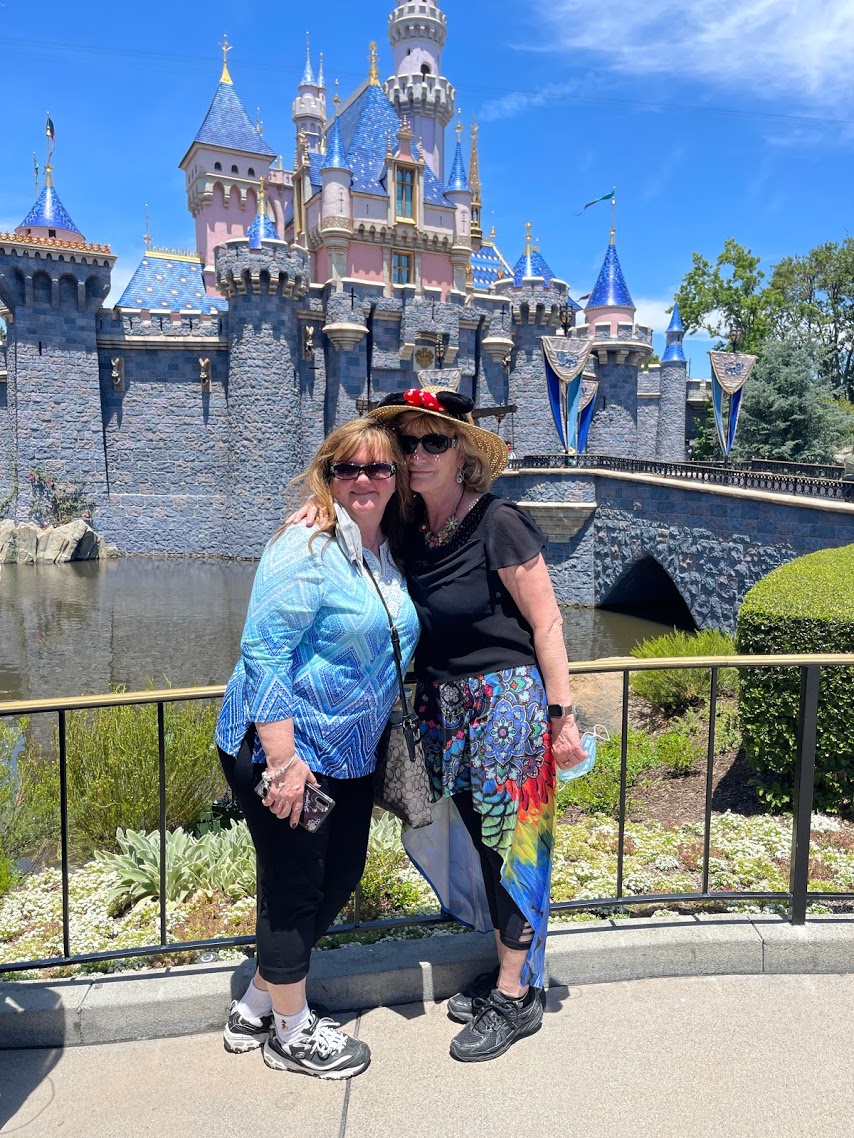 Be careful girls, the Queen may be getting jealous, and you will find yourselves in trouble!

We went to the Snow White ride as it has been updated, and it was pretty good.  Dr. Mary re-enacted the story, complete with her famous witch sounds, scared several children to death. 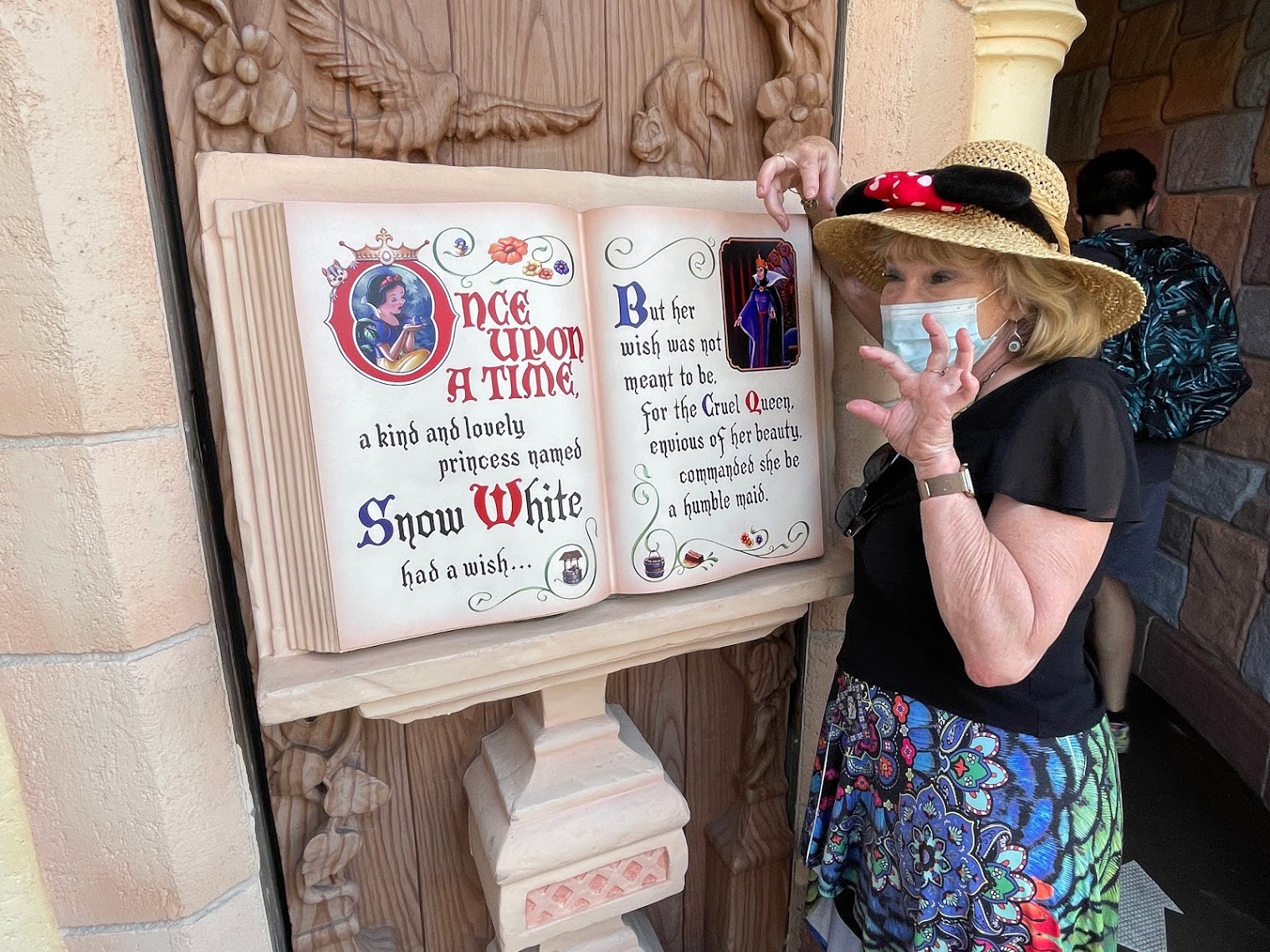 She acts out the story.

Of course, It’s A Small World was mandatory and the line there was moving quickly also.  We had plenty of time to talk and giggle and laugh.

Dr. Mary was like a little kid dancing up a storm and excited to ride the boats. 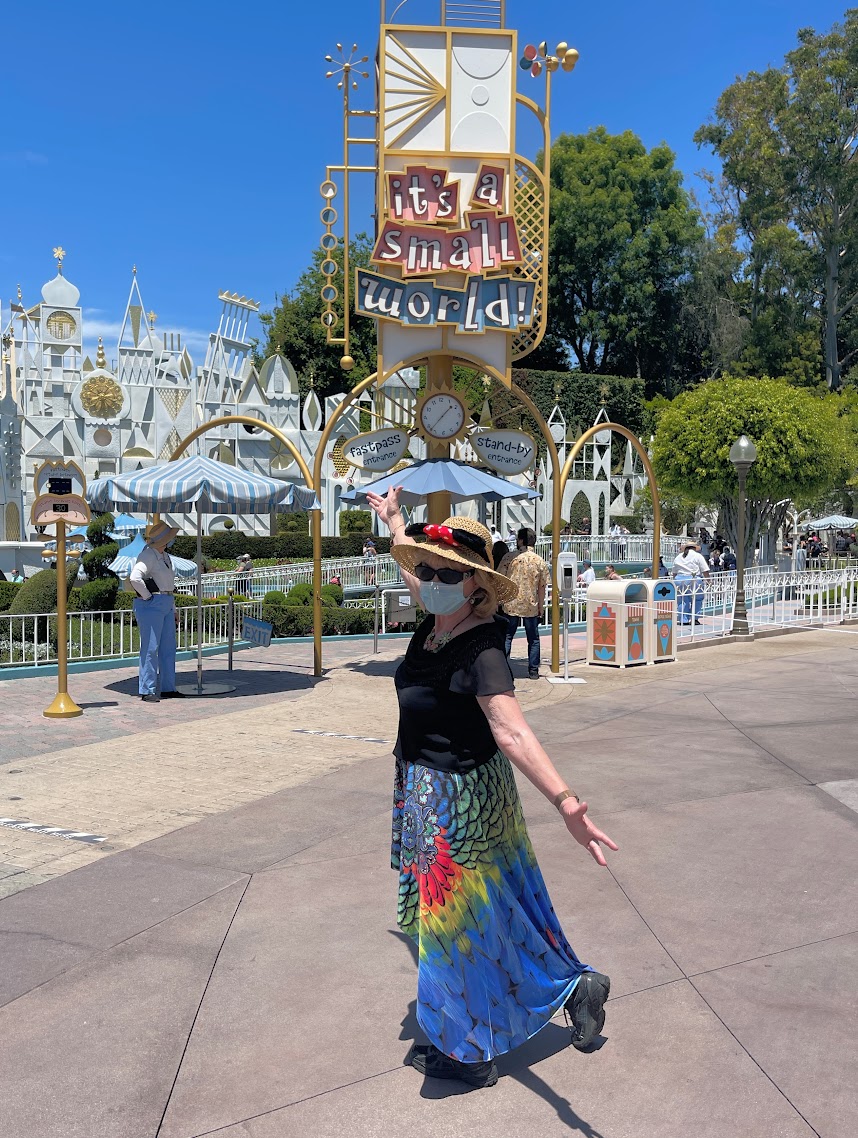 None of us could figure out how she managed to lean over without falling!  Could it be magic? Did you hear about the Mexican magician was doing a magic show?  He said, “Uno, dos…” And he disappeared without a tres. 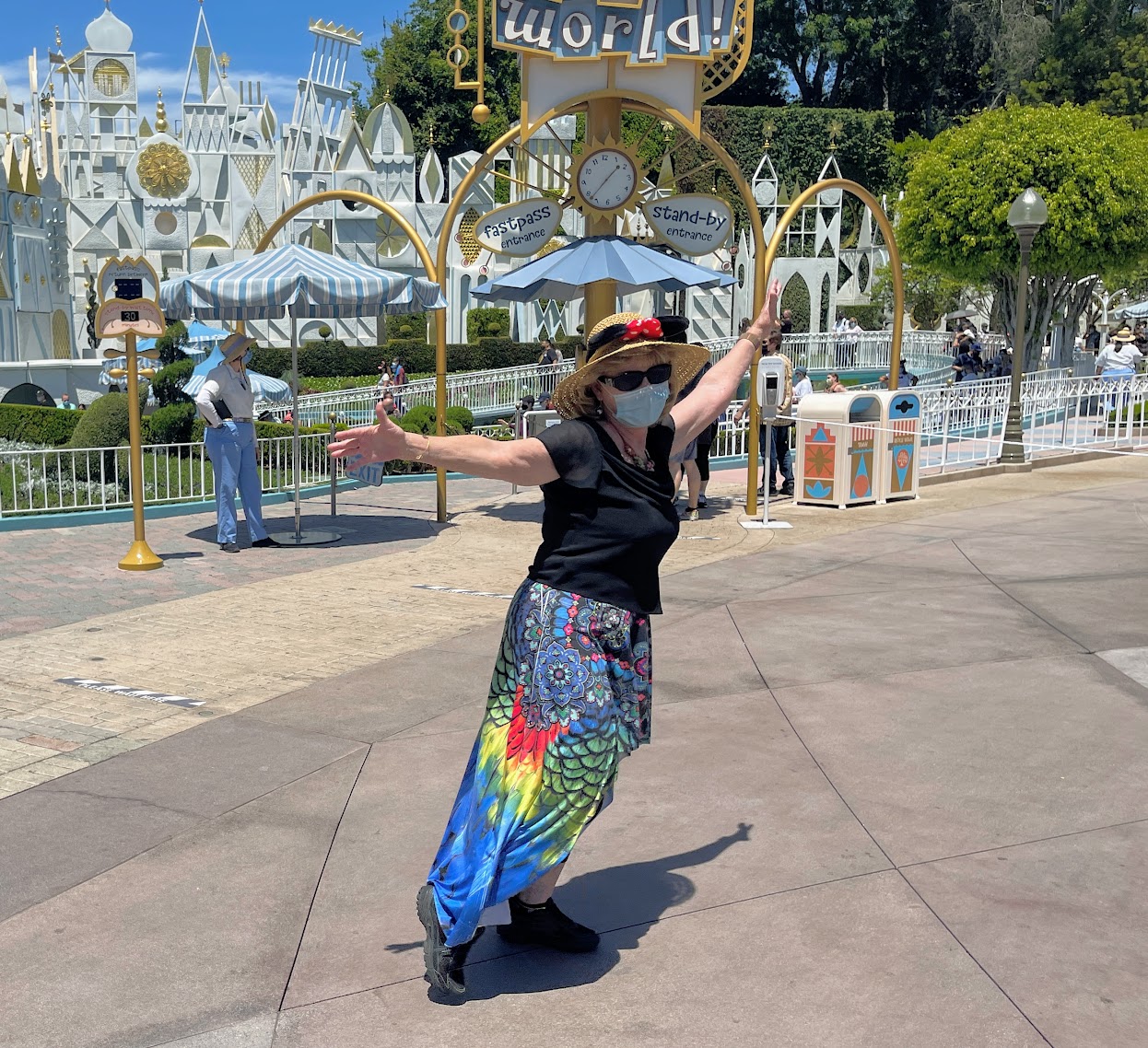 How does she do that?

The line was in the shade, and we moved quickly! Time to get our pea brains set with the theme from “It’s A Small World”… we will have that tune in our heads for the next two days! 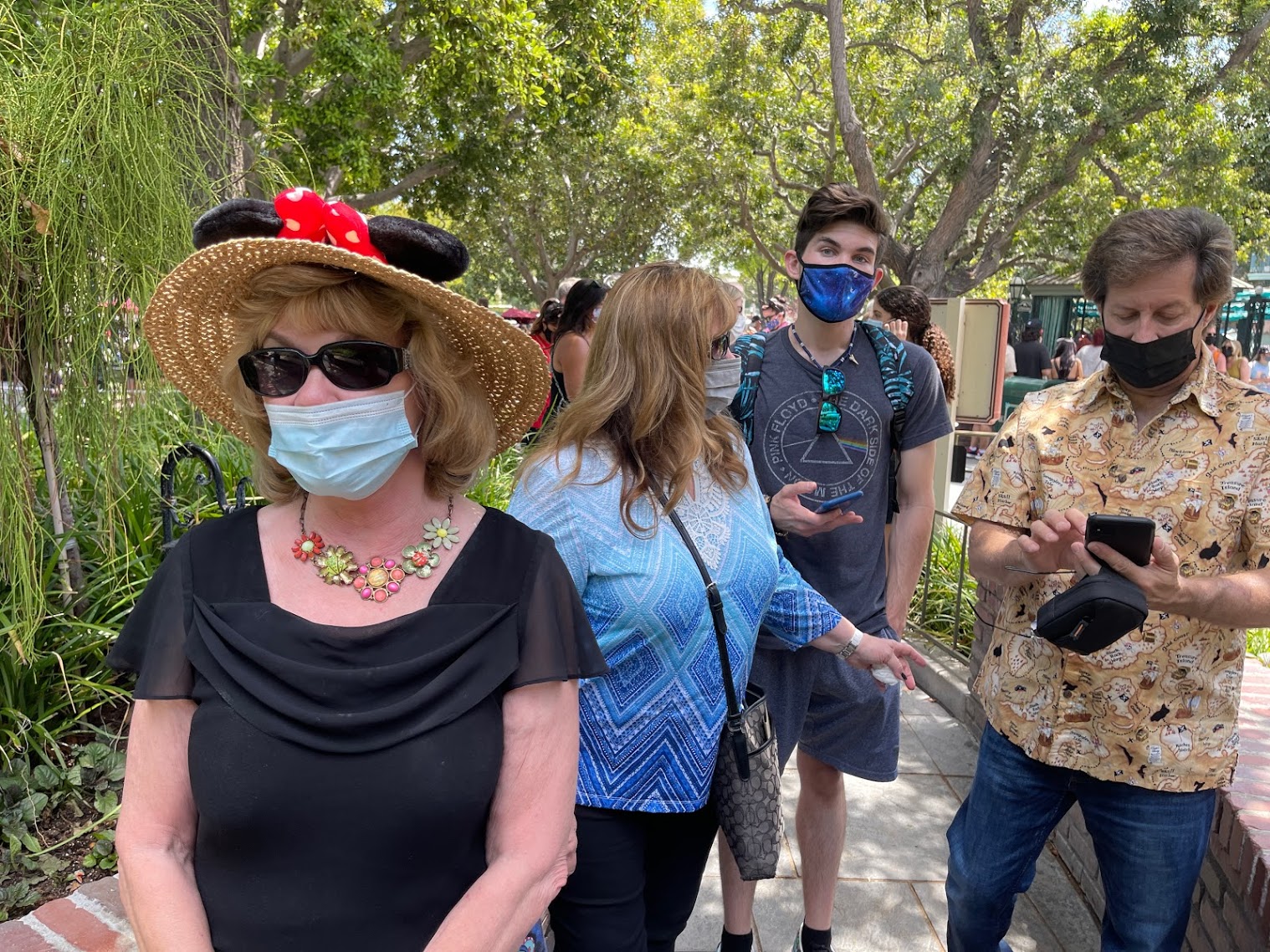 Waiting in line was not too bad.

We are on, and here we go. Bob has the longest arms, so he was in charge of the selfie department. 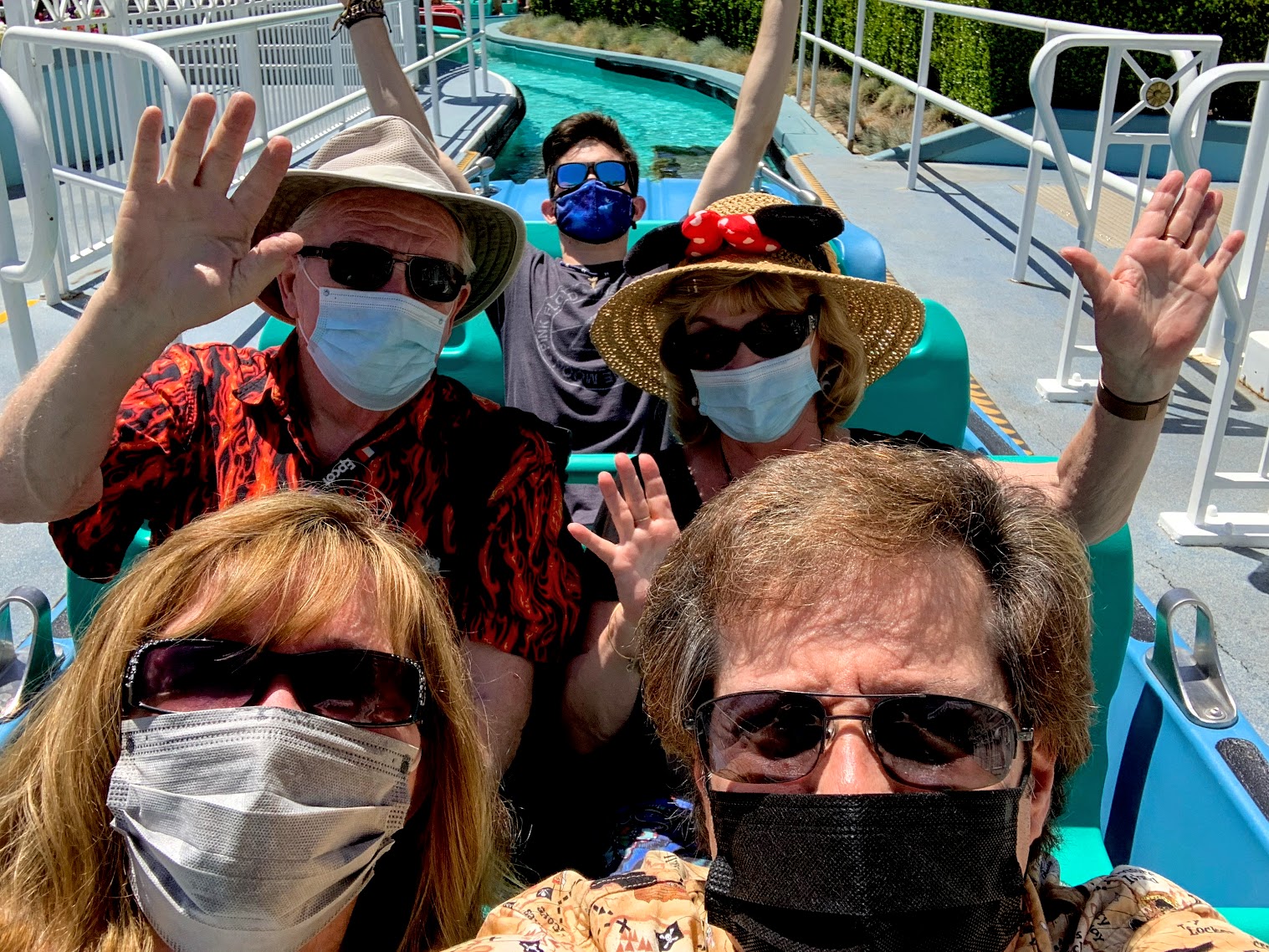 OK, it’s 2:30 PM and time to have a snack and a drink!  To toddled off to Catal and imbibed in a glass of wine and a small meal.  Bob, Robin, Nick, and we had fun telling stories. 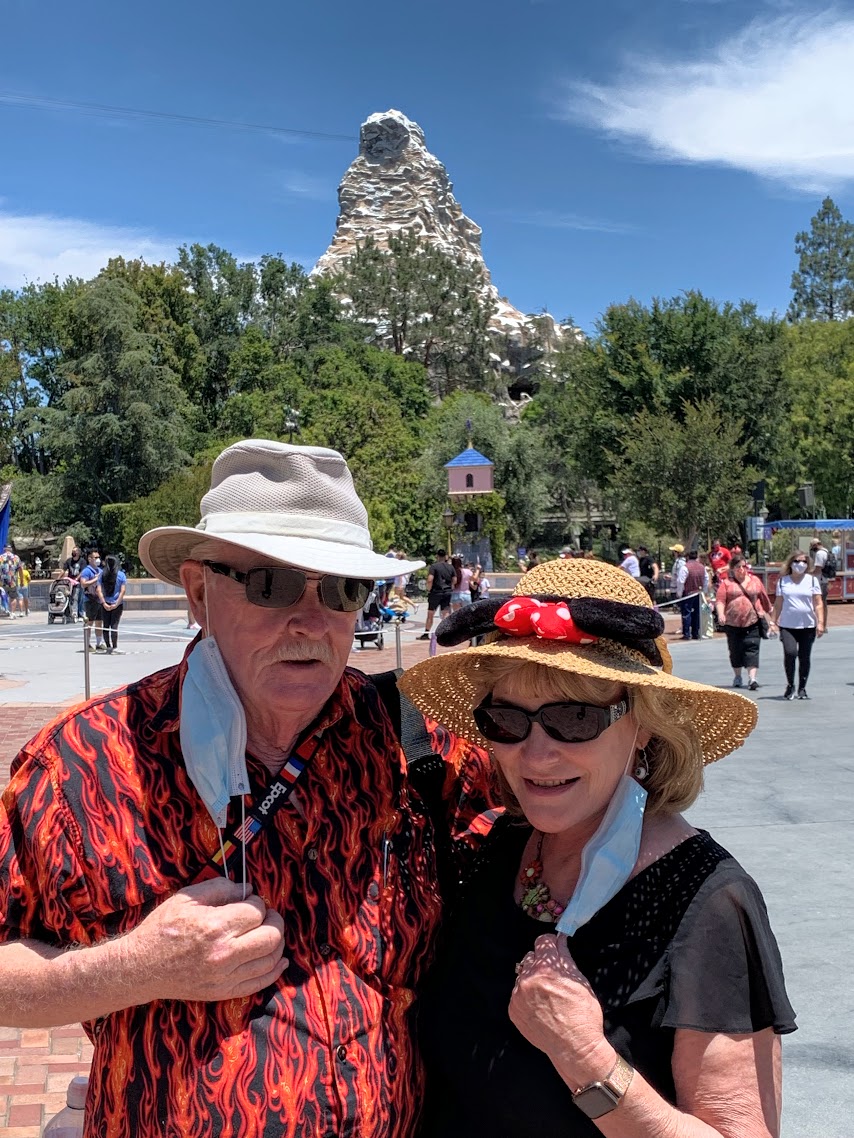 We did pretty well for old farts!  Almost two miles an hour, but the bad thing is we only lost 345 calories. Two glasses of wine negate the whole activity. 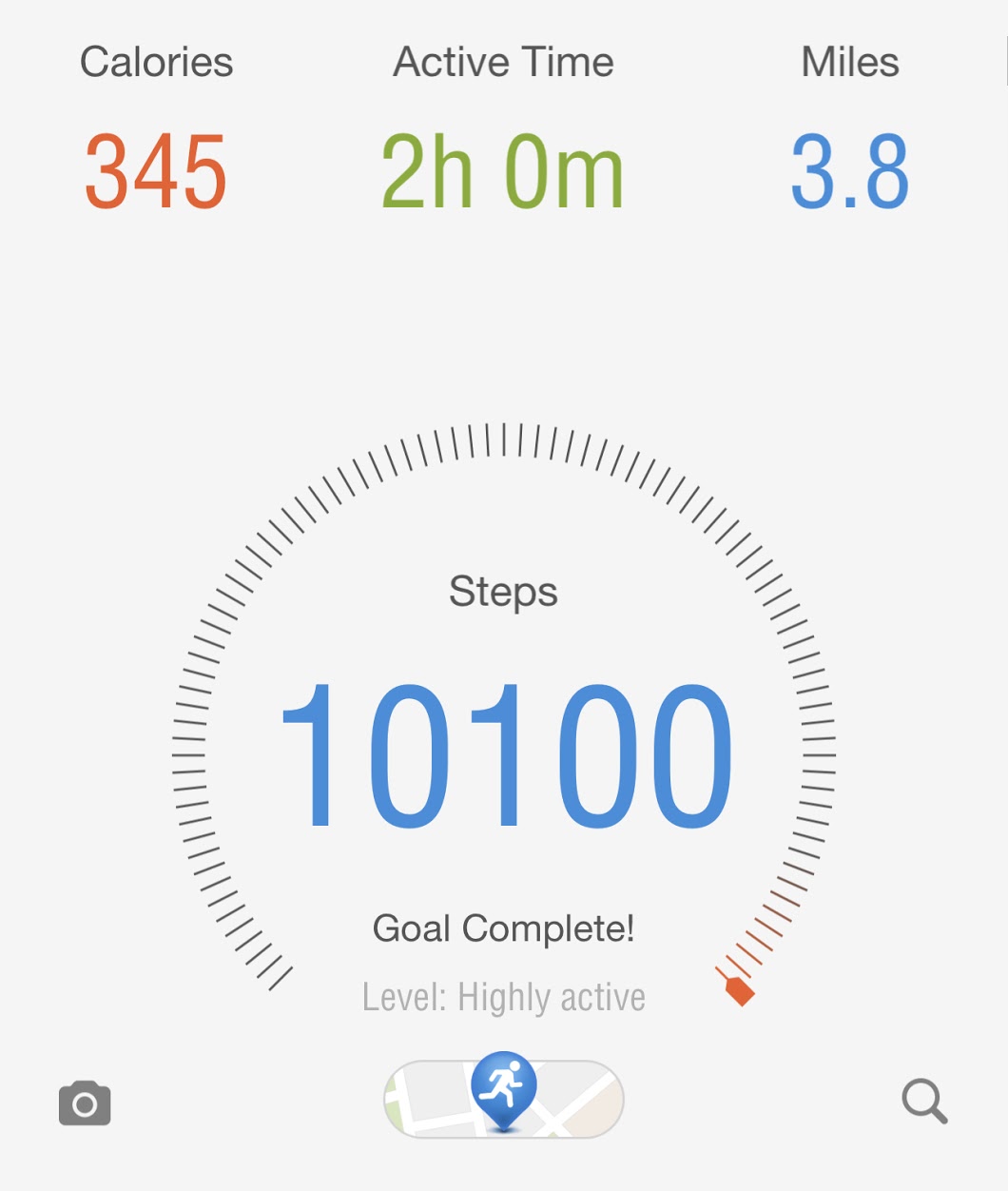 We did our exercise for today!

After lunch, Mary and I decided we should go home not only to rest but to allow Bob Z. to go home.  He stayed all day at the new hour supervising the plumber.  However, he did Donna’s book while he was waiting, so it wasn’t a bad day.  Bob Z. is an amazing friend!

We got to Casa Valencia and began unpacking some more, and we are down to eight boxes in the kitchen.  Not bad since we started at thirty-five boxes.  The real issue will be when Mary’s kitchen visits, but I believe the lady makes a house a home, so whatever Mary wants to do will be fine with me!  Besides, who needs eight cast-iron frying pans anyway?

Time for a rest, so up go the feet, and we relaxed for twenty minutes before hitting the unpacking activity again.  We departed the house after dark, around 8:00 PM.  The plumber had just departed.  We have hot water and plenty of it. 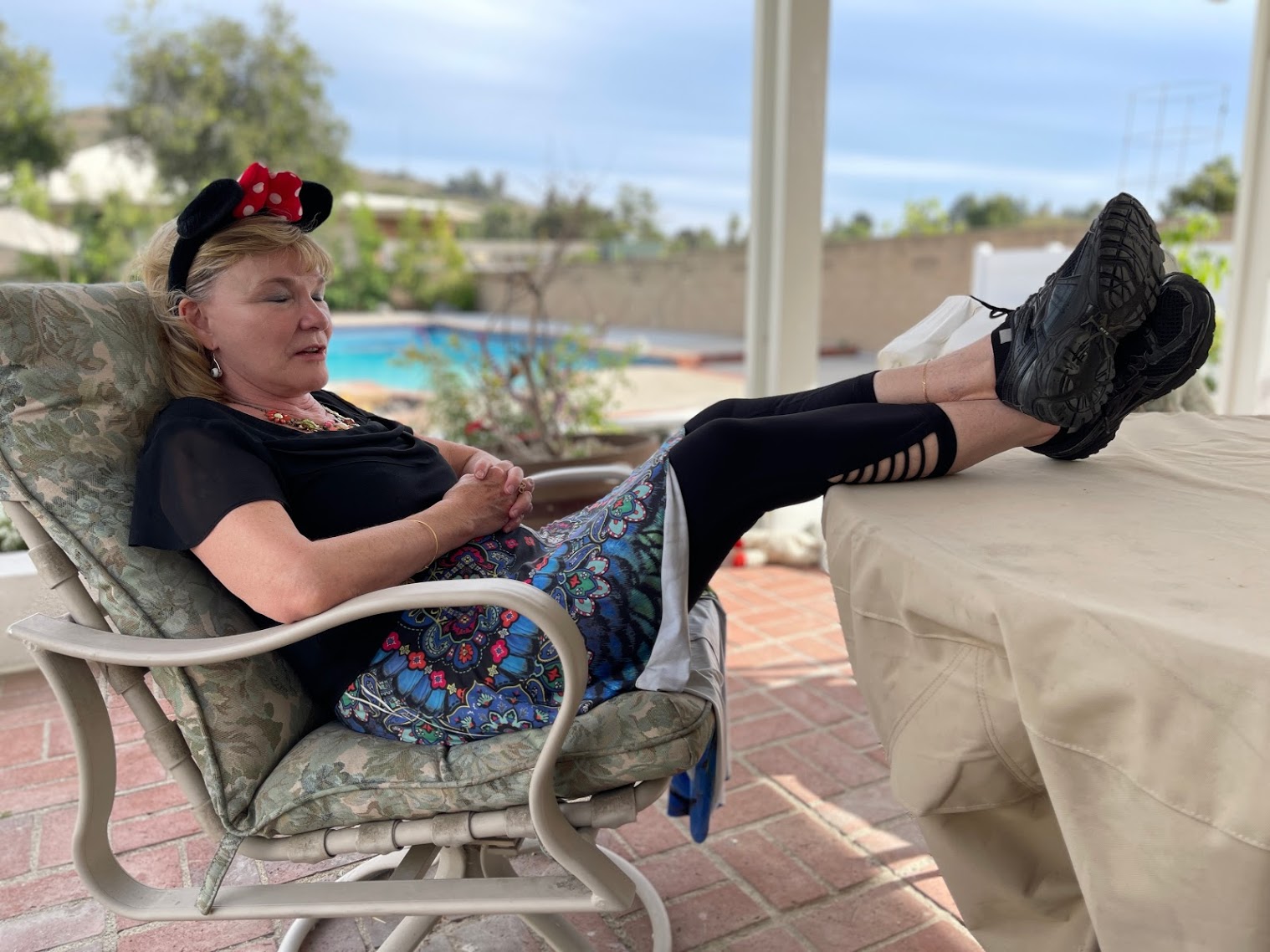 Arriving home at Mary’s, we immediately crashed, like, bam!  Tomorrow is Mary’s birthday, so we plan to celebrate by going to the dentist, visiting the escrow lady, driving back to Los Alamitos, and then having dinner at Dianne and David’s house.  We are just moving ninety miles an hour.  Mary is staying at Casa Valencia to meet up with the soft water guys, and then she might meet me along my path of activities.   I hope she does, as I don’t like being away from her for very long.

Just an old retired guy trying to finish out my last years on this planet. I lost my best friend and wife in early 2020. I was blessed again by reconnecting with Dr. Mary Côté, a long-time friend. Mary and I got married July 28th, 2021, and are enjoying life together and plan to spend the rest of our lives being a blessing to our friends and family.
View all posts by Paul →
This entry was posted in Adventures, Dining Out, Family, Food and Wine, Walking, Working Around House. Bookmark the permalink.