Have you ever had a memory that slips out of your eye and run down your cheeks?

Have I mentioned we enjoyed our wine?  Sue introduced me to real wine, before her, I drank sweet wines and thought they were OK.  OMG, was I in for an awakening!  Sue and Donna would take us boys to Temecula, and they would taste and talk about wine for hours.  Bob and I just shopped and kibitzed around.

My bride was never into jeans, and this shirt is the closest she ever got to denim, but I thought she looked magnificent in her selection.  Her wine skills were quite sophisticated, while I was lucky to tell red wine from white.  She forgave my faults, which, by the way, was a full-time job.

I often sit on our patio in the afternoon, and I can see her across from me, enjoying the various wines we have picked up over the years.  I talk to her about things, and I can hear her sage advice.  I love you, Sue, and always will! 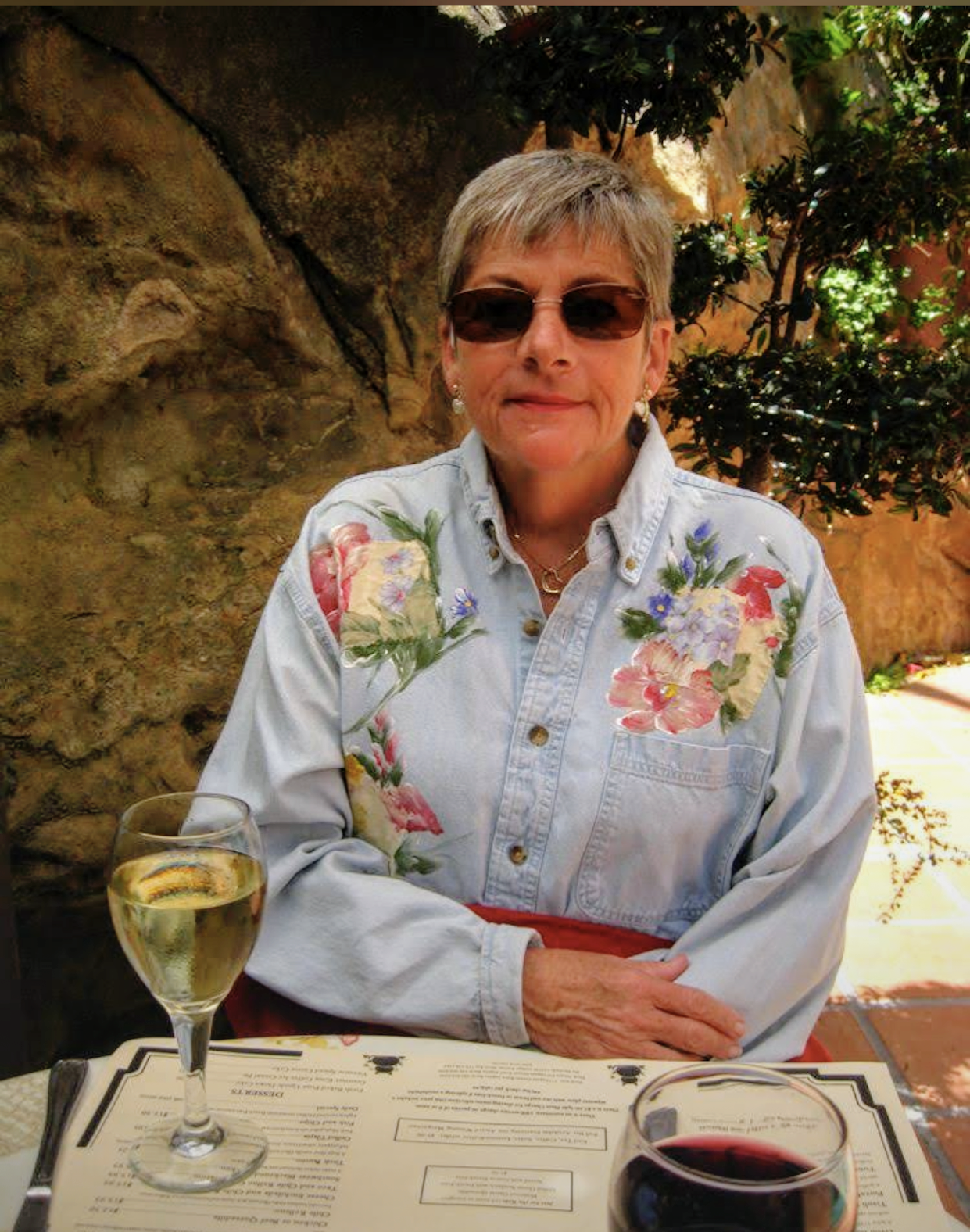 We were enjoying our afternoon wine break!

The sun rose in the east, and I rose soon after foregoing crowing as I do not want to take away the roosters’ means of living.

Breakfast was out of the questions because I had an appointment at the Elks for brunch, and I knew that would fill me for the remainder of the day!

I put in three more of the new can lights and worked on the computer doing some long-needed renaming of my Alexa devices.  I moved them around and kept forgetting their names.  I had to remember to say “Dining room lights, off” when I passed through the hallway, and worse.  Now, they are correctly named for where they are located.

Outside, the garden keeps growing, and more walks are required to see what’s happening.  The scarlet runner beans are doing their thing.

Did You Know? Scarlet runner beans, botanically classified as part of Phaseolus coccineus, are an open-pollinated runner bean and member of the legume family, Fabaceae. It is the one species in this genus that is grown both as a vegetable food plant for its edible pods (green beans) and seeds (fresh or dried beans) or as an ornamental plant for the appreciation of its showy flowers. Flowers (addition to salads) and young leaves (pot herb) are also edible. Another common name is butter bean, which, however, can also refer to the lima bean, a different species. It is grown both as a food plant and an ornamental plant. The plant occurs wild from Mexico to Panama and Central America. Other popular common names of the plant are Runner Bean, Scarlet Runner Bean, Scarlet Conqueror, Fire Bean, Mammoth, Red Giant, Dutch runner bean, Case knife bean, seven-year bean, Scarlet runner, Red flowered runner bean, Red flowered vegetable bean, Perennial bean, Dutch Case-Knife Bean, multiflora bean and butter bean. 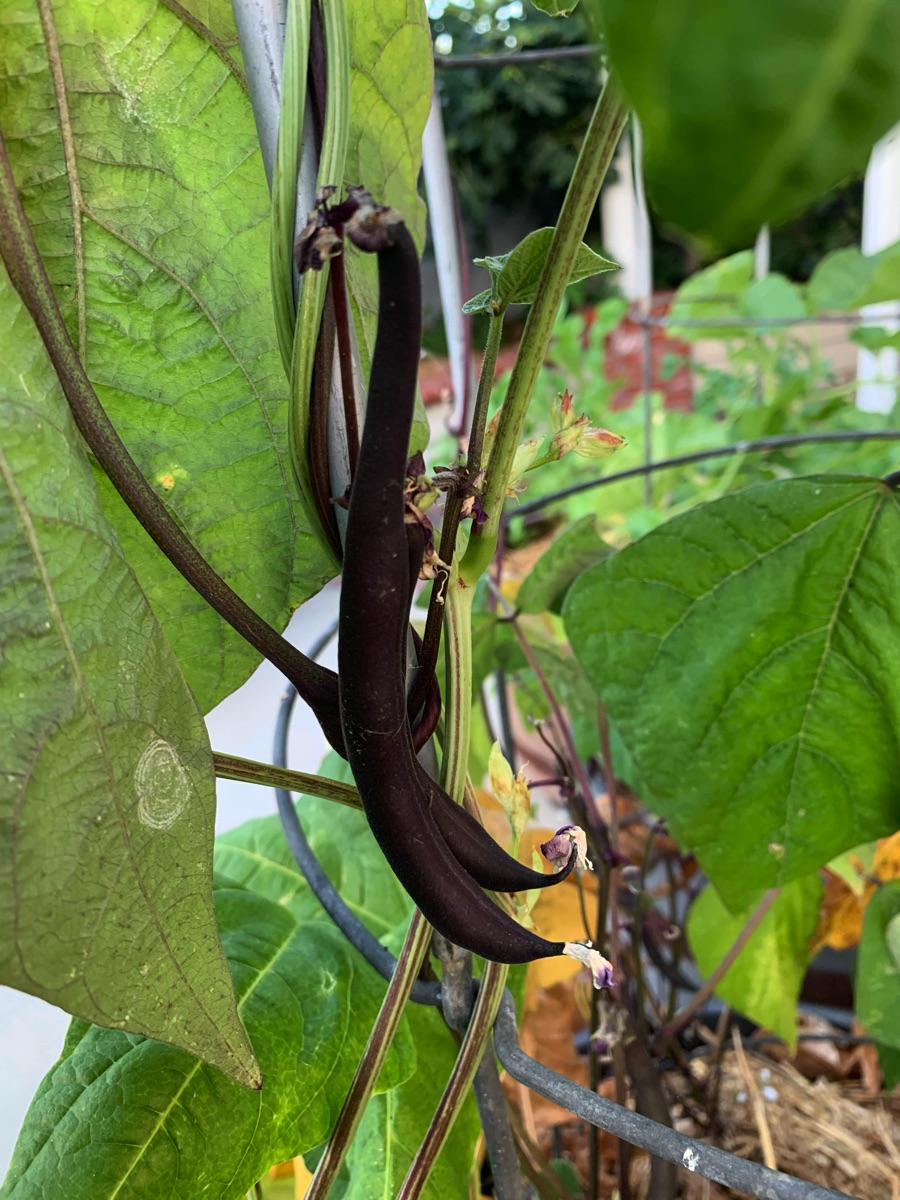 Around the corner can be found, Mr. Prolific!  My fig tree goes wild and draws several raccoon visits a week. The mightly flashlight chased one off last night.  Neighbor Vicky is a fig aficionado (a person who is very knowledgeable and enthusiastic about an activity, subject, or pastime.) and visits the tree every other day! 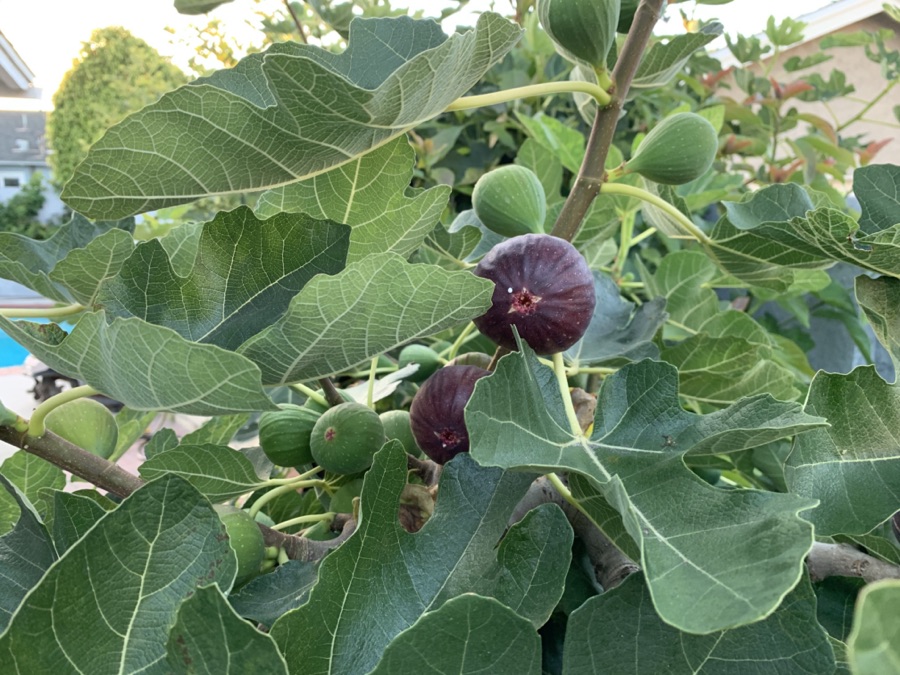 We have figs, tons of fings!

My favorite part of the day, taking a shower in the new bathroom! But I diverge.

Into the Grey Ghost, and we gallop to the south heading to the new Santa Ana Elks for brunch. All we can eat hot dogs, bratwurst, and hamburgers.

Did You Know? Bratwurst is classic German pork and veal sausage, seasoned with herbs and spices such as ginger, marjoram, nutmeg, caraway or coriander. They should be grilled or fried before serving.

Both Sheboygan, Wisconsin, and Bucyrus, Ohio, claim to be the Bratwurst Capital of the World. The much smaller town of Bucyrus, however, has a much larger annual Bratwurst Festival. Sheboygan is home to the largest bratwurst manufacturer. 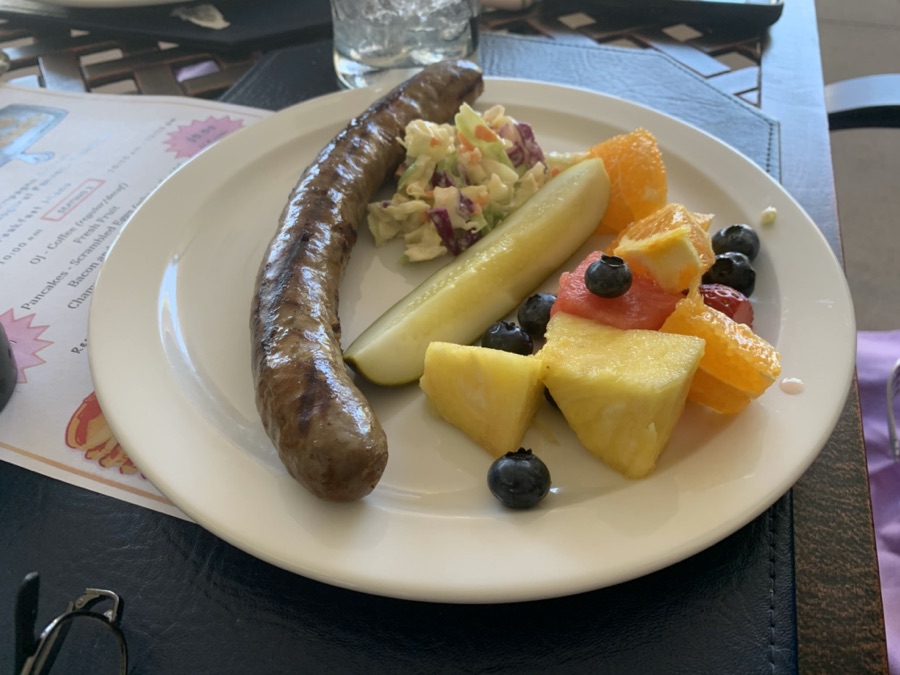 Of course Bob, Bill, and I carry on about this, that, and everything while the girls talk about serious matters! 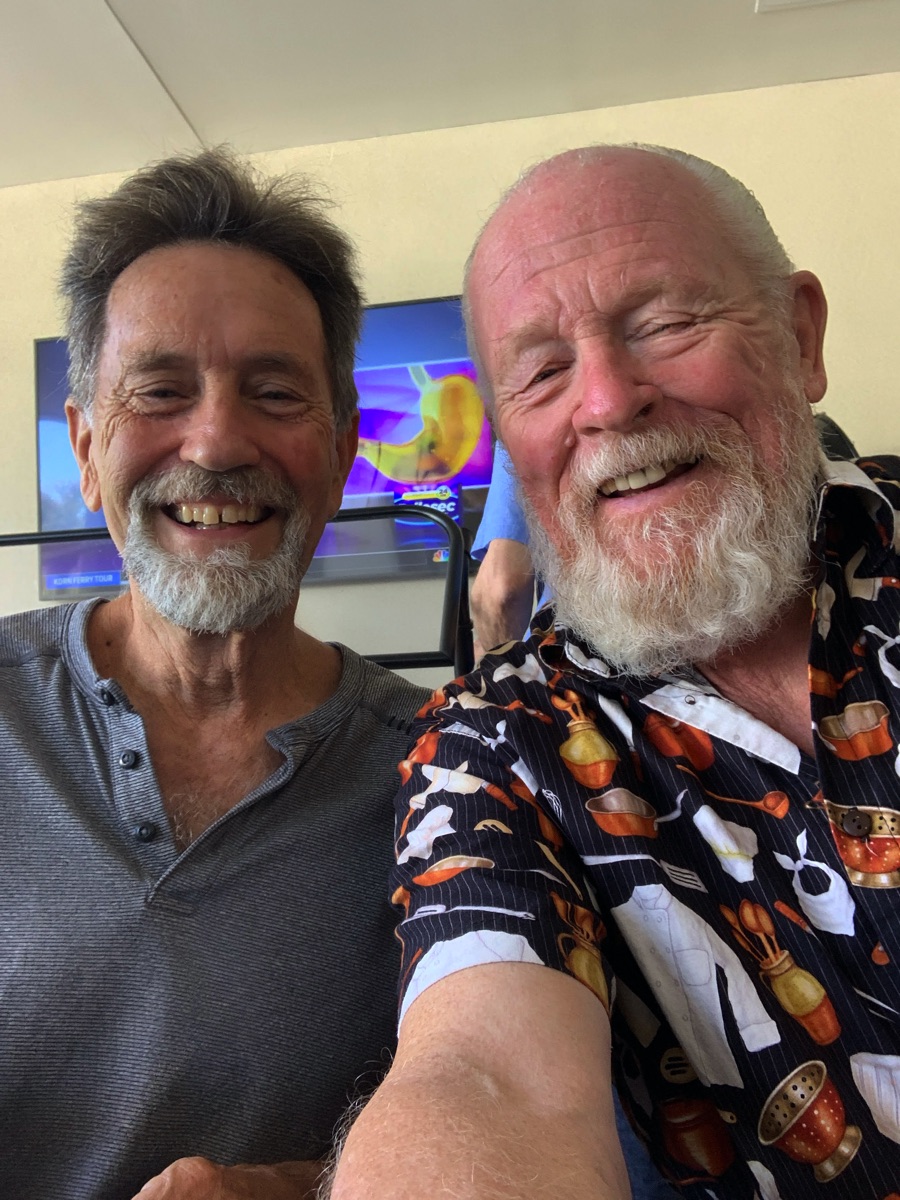 Watch out for these two!

The tables are distanced appropriately, and the patio is open to the rest air, so no masks needed. 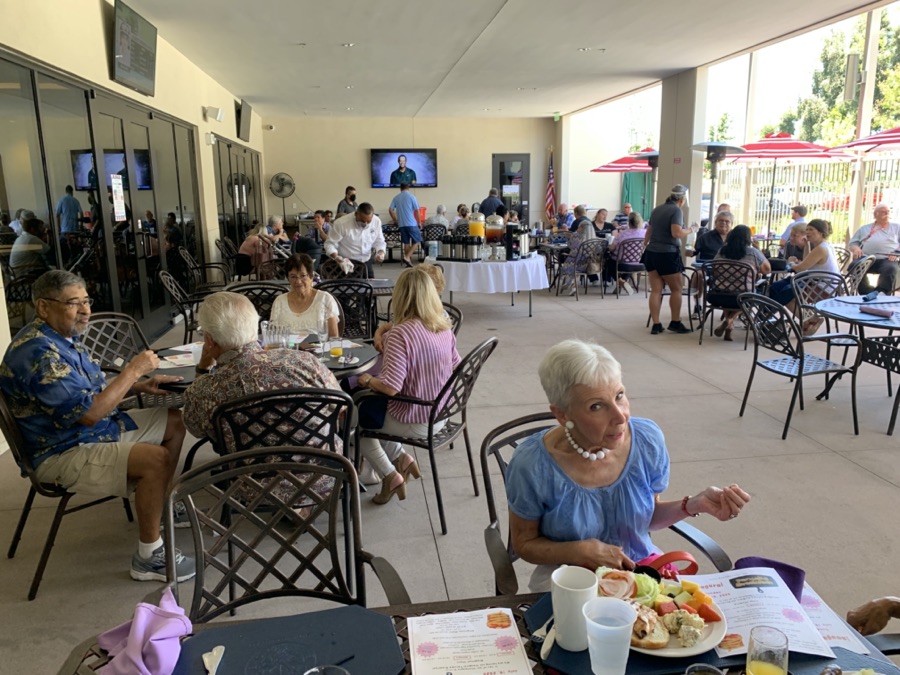 Mary spotted the eye in the sky!

Mary and Donna are missing the dancing at the Phoenix Club and are plotting some way to get Jan Mongell to come to an event and escape her house.  Perhaps kidnapping is in the future? 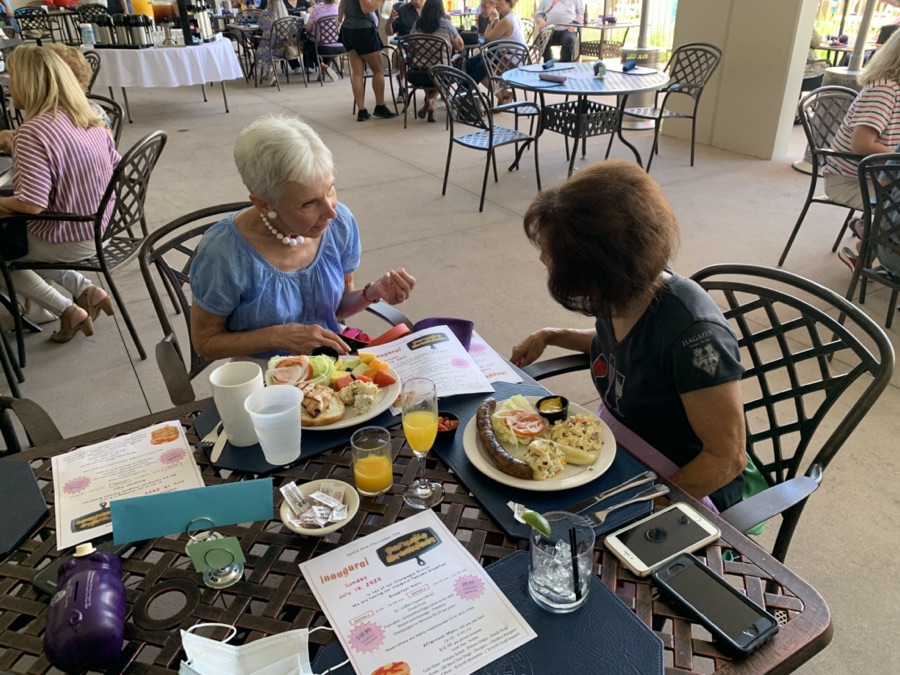 Mary and Donna are chattering away.

Bob and I both went back for more, but we were careful, we did not eat any bread!  The plate ended up with a hot dog and a brat plus a burger and lots of salad on it. 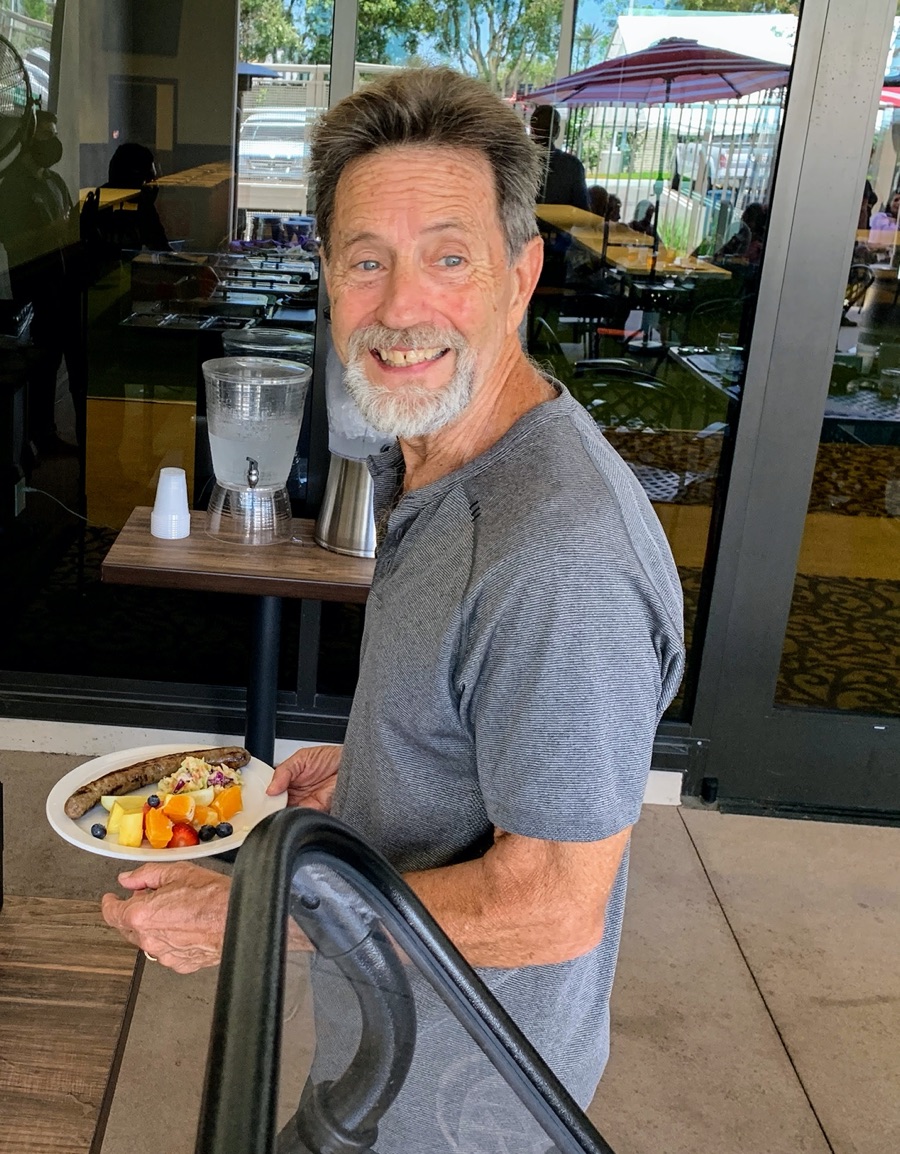 Bob sneaks in a burger.

Bill was more careful than us; he dug into the salads with vigor. 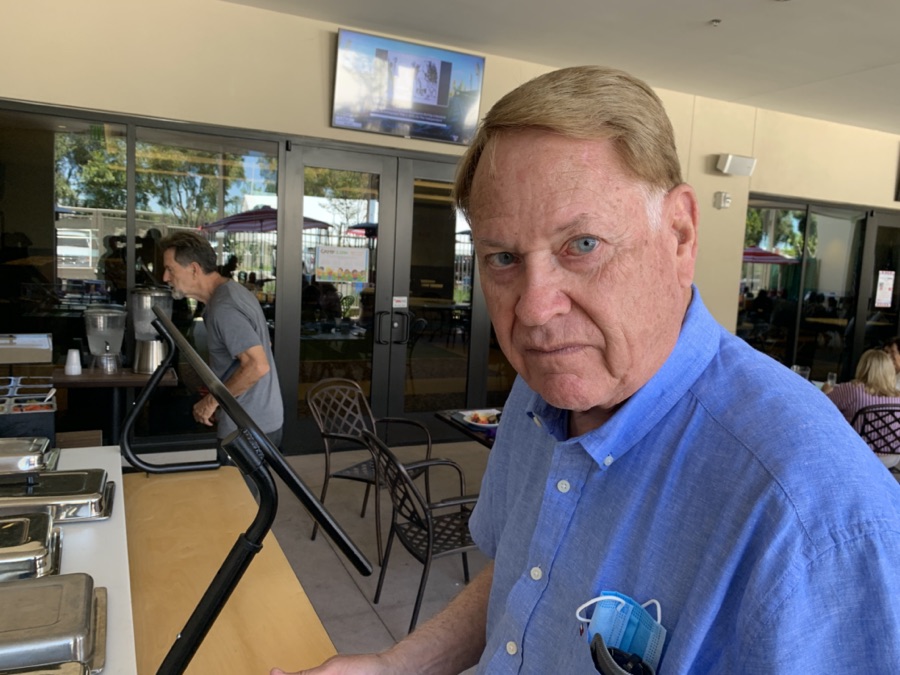 After returning home, a nap seemed like the natural thing to do.  A few minutes later, the iPhone sounded off, indicating someone was in the yard.  Immediately it was surmised that Santa was here, commonly known as the “Amazon Man.”  Yes, indeed, the towel rack has arrived. The wrapping was torn into with all the vigor of Christmas morning. The rack was beautiful, a bright shiny chrome just begging to be put on the wall about the commode. 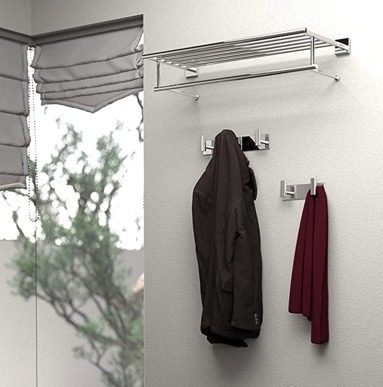 The shelf installed on the wall, I may need two?

Attempting to be “classy,” a picture was ordered for the new bathroom based upon Bob’s recommendations.  Back and white with a greyish backdrop, the red Effiel Tower will remind me of Sue every time I see it, and that is good. 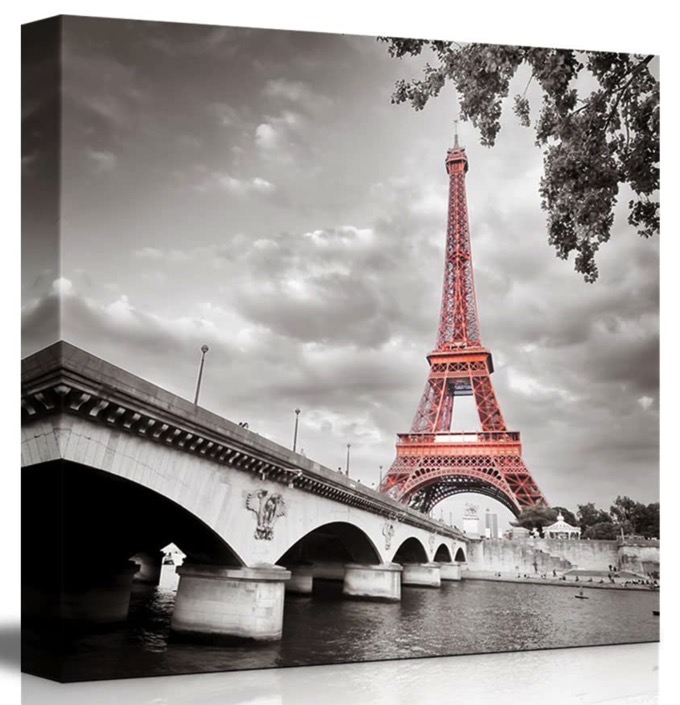 If it works out, there is another one but set in London with Big Ben highlighted in red, more memories of Sue.

The evening was arriving, right on time, I may add.  A walk in the yard before it gets dark seemed the right thing to do.  Mental notes were taken for this week’s “to-do list.”   While finishing off the last of the bills, a call was placed to Lee, but there was no answer.  She must be at the clubhouse with friends.

Remembering that cleanliness is next to godliness, a return to the new shower was made just to make sure it was not leaking.

After getting into the jammies, blue this evening, a call came in from the country, and it was Robin.  We made our plans for this week and Thursday she will be staying over, and we go back to movie night, yeah!!  The coffee machine was calling, so into the kitchen, I went and popped in a Keurig cup of coffee. The coffee smell delectable.  Sauntering into the office, cup in hand, the Alexa Show began to notify me someone was making a call.  It was from Lee!  She must have got home and heard the message.

We talked for thirty-three minutes and thirty-three seconds (there is a timer that Alexa uses to keep track of call duration).  She is coming into “town” Tuesday, so I plan to go have lunch with her, perhaps the Elks?

The evening is young, so the office TV got a chance to perform.  For a reason only known to God, I selected “Zombieland 2: Double Tap”.   Summary: Columbus, Tallahassee, Wichita, and Little Rock move to the American heartland as they face off against evolved zombies, fellow survivors, and the growing pains of the snarky, makeshift family.

I must say it was pretty funny IF you could get by the language which wasn’t needed.