“We do not have to rely on memories to recapture the spirit of those we have loved and lost – they live within our souls in some perfect sanctuary which even death cannot destroy.” – Nan Witcomb

We enjoyed Sedona, Arizona, and traveled there many times to play golf and enjoy their eclectic restaurants. We had a favorite place to stay with a hot tube on the patio overlooking a small stream.  The hotel had a full kitchen and plenty of room.  We would golf in the morning, have clinch, rest, golf again in the afternoon and generally in the ninety-degree plus heat!  Sue was impervious to the heat, enjoying every last degree.  I, on the other hand, would consume gallons of liquid refreshment to attempt to stay cool.

After the second round of golf, most people would crash but not the “Energizer Bunny.”  Sue would search the paper for a place to go dancing, and she found one every night.  We would dance until the band got tired.  Then we would repeat the same the next day.

We would come exhausted, but after six hours of sleep, we were back in the saddle again heading the next golf/dance venue.  To say Sue was energetic was an understatement.  I miss that go-go attitude and spontaneous attitude. I miss her so much! 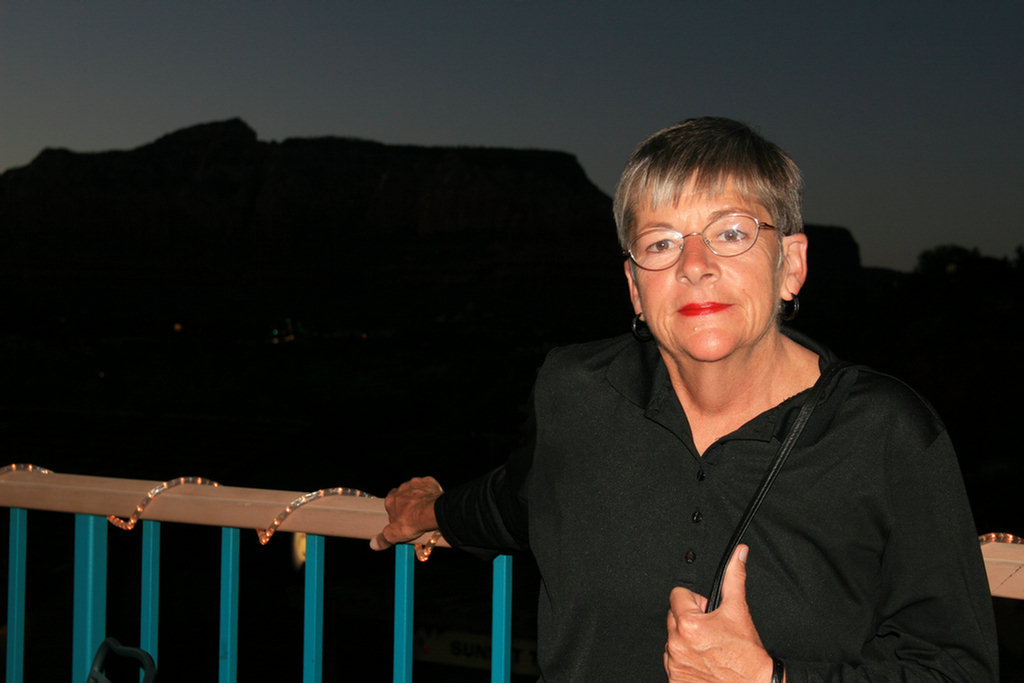 Sedona in the dark!  Sue brightened it up!

I beat the sun up by a few minutes, so I finished off yesterday’s diary a little early.  Today was laid back, only one Lowe’s run, and that was to get new hinges and a new doorknob/lock assembly. Going to Lowe’s is just an escape mechanism to get out and about.

The painting in the bathroom was finished its morning.  The trim is now done.  Tomorrow the chrome hotel towel shelf will arrive, and I plan to decide what wall treatments to do by Monday.

Hunger pains. Oh, dear, what should be done?  I must make empanadas for breakfast. I had some chicken, and I had bought the empanada discs about a week ago, so I put them together today! 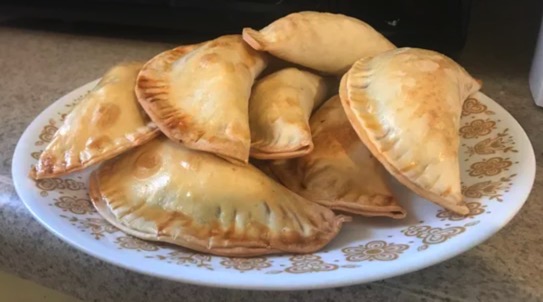 My estimate is about 150 calories/empanada! I finished two, and the rest is for tomorrow.

The garden calls, so I put on work jeans and hit the yard for an hour or so.  After the gardening effort, I came in and watched some TV.  Mid-afternoon, I got hungry again so I jumped in the car, drove down the street, and asked myself, “What am I doing? I can eat better at home!”  I decided to make a blue-cheese and swiss cheese hamburger with thick onions and a tomato right from the yard.  Now it was time to take a walk. 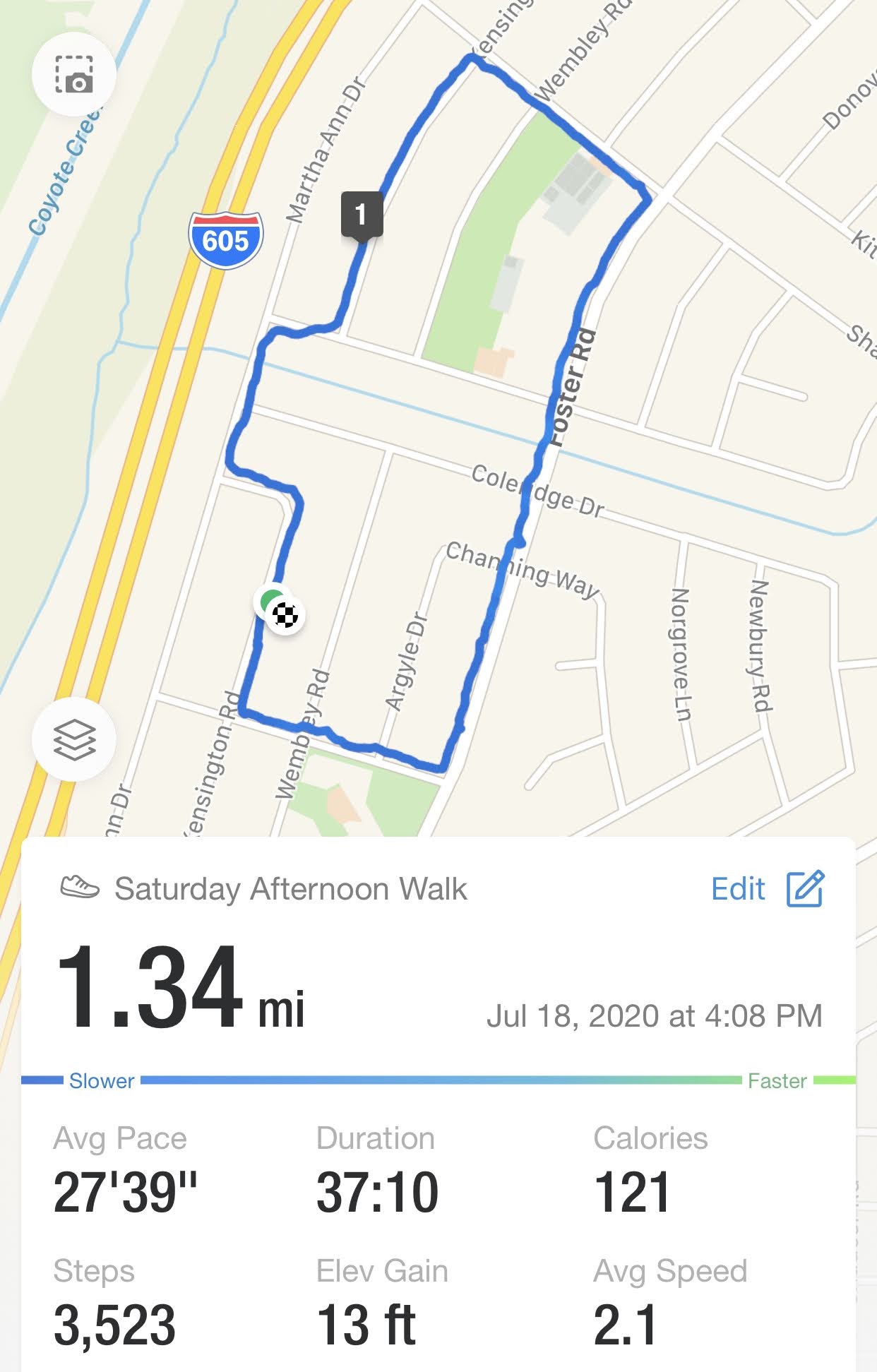 The walk was short but sufficient.

As I came down the street, I saw the woody going for its last drive in the hood.  Vicky and Del decided to sell it.  As Vicky said, “It was time.” 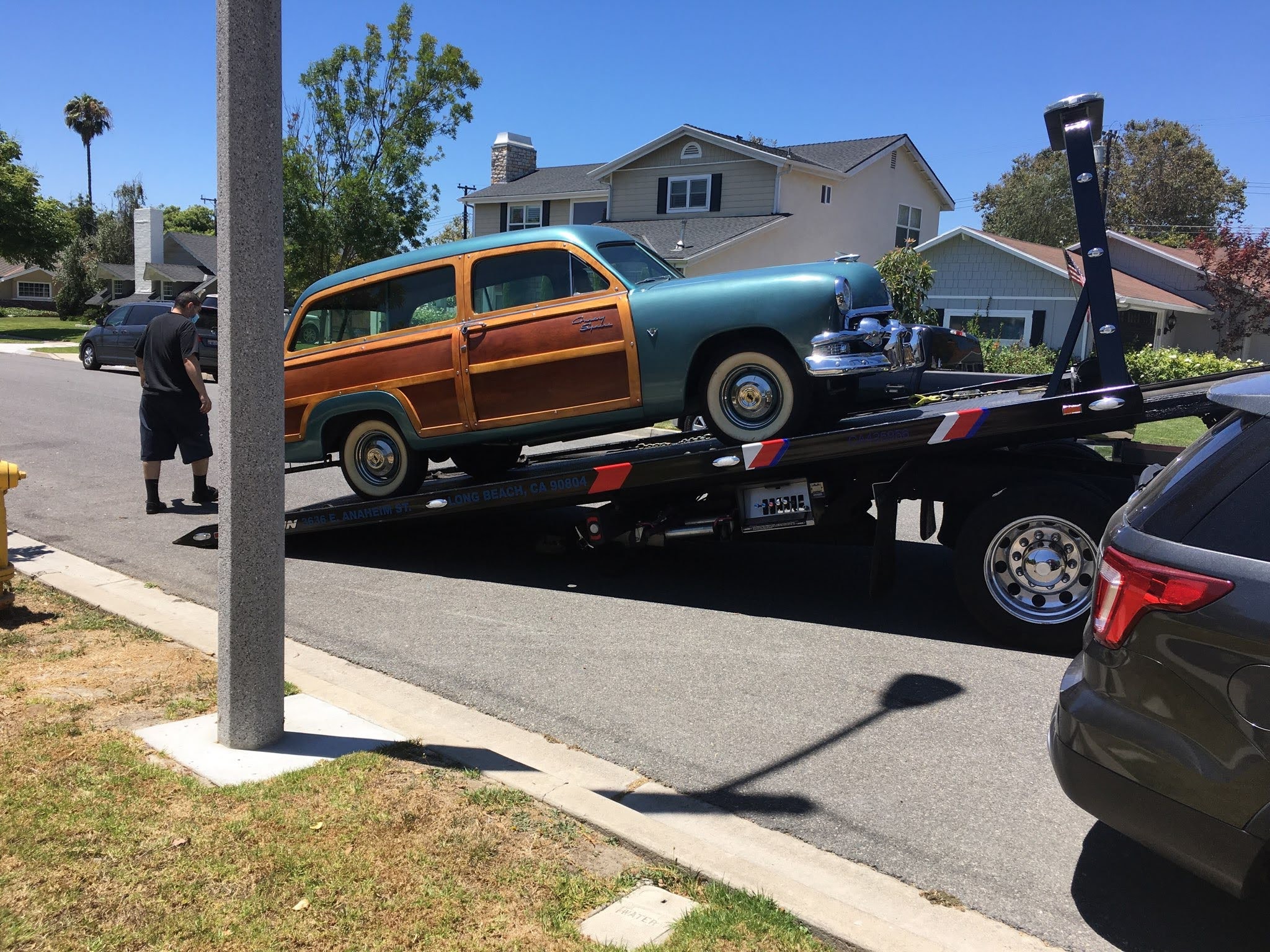 Tonight is movie night, so I must go by Costco and pick some kind of dessert.  That will be fun! Poof!  I got to Costco at 6:10 PM, and they were closed, so I stopped by a Stater Brothers and got a Strawberry Cheesecake Pie, and that is a favorite of the boys.

Next week I am going to order a tomato cake!  I think Katella Deli can pull it off.  I can hardly wait to see Amy and Joe’s eyes when I bring it for dessert. 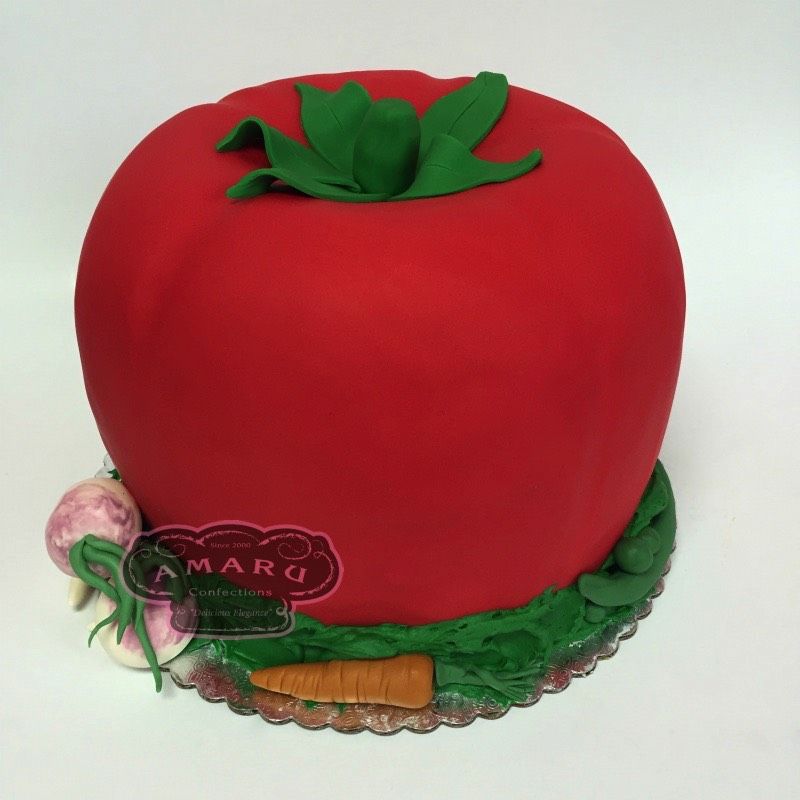 I should get a laugh out of this cake!

The movie tonight was great; it was called “Flipped.”  Even though Rob Reiner did it, the film was OK. 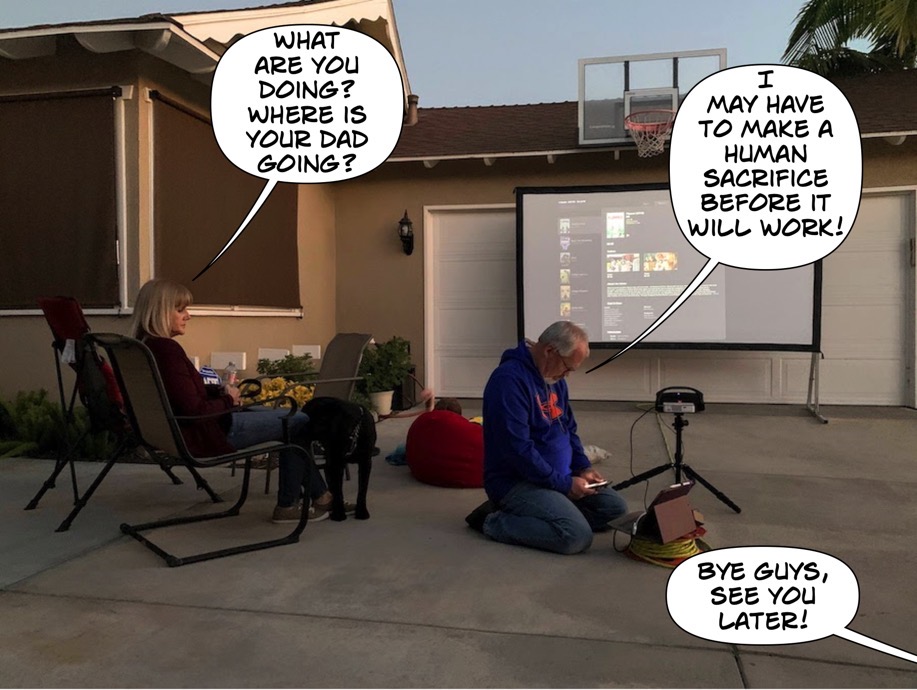 Joe attempts to get the movie started!

Summary: Juli Baker devoutly believes in three things: the sanctity of trees (especially her beloved sycamore), the wholesomeness of the eggs she collects from her backyard flock of chickens, and that someday she will kiss Bryce Loski. Ever since she saw Bryce’s dazzling brown eyes back in second grade, Juli has been smitten. Unfortunately, Bryce has never felt the same. Frankly, he thinks Juli Baker is a little weird–after all, what kind of freak raises chickens and sits in trees for fun? Then, in eighth grade, everything changes. Bryce begins to see that Juli’s unusual interests and pride in her family are, well, kind of cool. And Juli starts to think that maybe Bryce’s dazzling brown eyes are as empty as the rest of Bryce seems to be. After all, what kind of jerk doesn’t care about other people’s feelings about chickens and trees? With Flipped, mystery author Wendelin Van Draanen has taken a break from her Sammy Keyes series, and the result is flipping fantastic. Bryce and Juli’s rants and raves about each other ring so true that teen readers will quickly identify with at least one of these hilarious feuding egos, if not both. A perfect introduction to the adolescent war between the sexes.

I got home about 10:55 PM and crashed soon after that.

Just an old retired guy trying to finish out my last years on this planet loving my best friend and wife, having fun, learning, and passing on helpful things to others.
View all posts by Paul →
This entry was posted in Family, Movies, Walking, Working Around House. Bookmark the permalink.
Powered by Maribol IMDB Plugin