I Survived Thanks To A Wonderful Woman And Fantastic Memories!

Well, Sue had her birthday, and we all survived.  The day was filled with beautiful memories of a fantastic person who enjoyed life and gave of herself every moment.  The number of people on Facebook that acknowledged the date amazed even me. The messages were heartfelt words of joy for having known her.

I wish I could share another glass of wine with you, my dear, but that is not to be.  I will share, for the rest of my life, joyous memories of a magnificent person I had the privilege to spend so many years loving.    I love you, Sue. 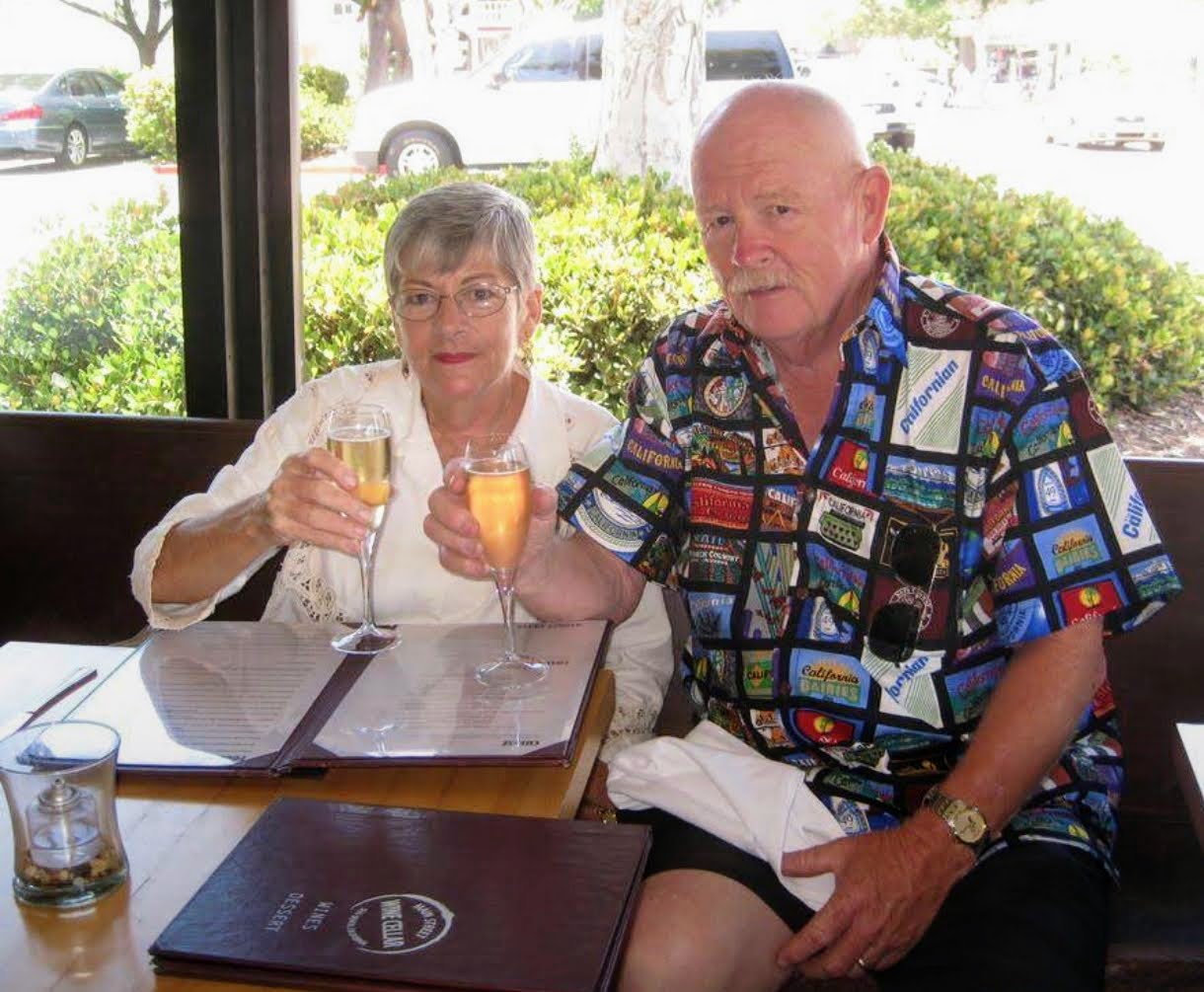 She was as strong as they come! 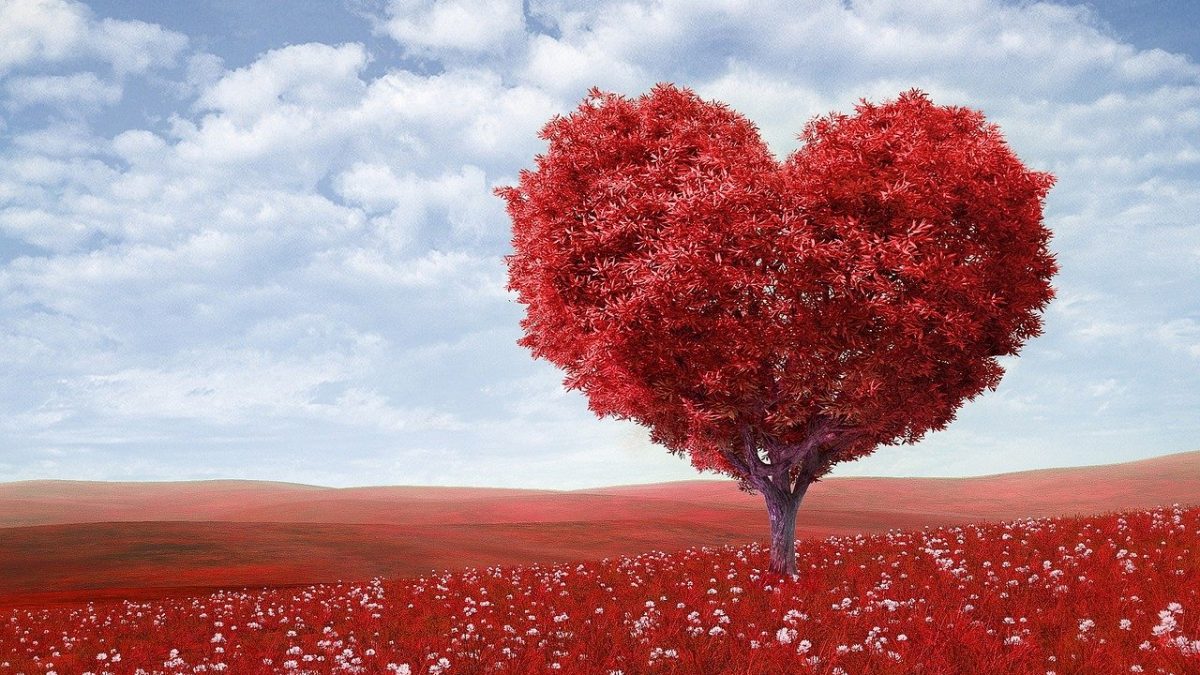 IN a world full of people, Sue stood out as something special to a lot of folks!

I worked around the house first thing doing my chores.  I am still learning how much my bride did that I am now finding out.  Keeping a home in shape and clean is a full-time job!  I did some wash, made the bed, straightened the kitchen, made breakfast, cleaned the counter, went through the mail, checked the bills, fed the dog (oops,I do not have a dog!),  the work never seems to end.

Then I was off the Lowe’s and Home Depot in search of polished chrome knobs for the cabinets.   I finally found something acceptable at Home Depot, and while I was there, I found air conditioning ducts, which reminded me, I need to replace several ducts up in the attic.  Some of mine are worn out, a task for another day.

As it approached 1:00 PM, I got ready for the ultimate embarrassment!  I am going to golf for the first time in three weeks.  Miss Charlotte asked me to join her for champagne at 2:20 PM in order to get ready for a 3:20 PM tee-time.  Life does not get better than this.  Her husband saw the temperature forecast and opted to stay home.  It’s Charlotte and me against Mother Nature!

It was a beautiful day to be outdoors even though it was in the mid-nineties. 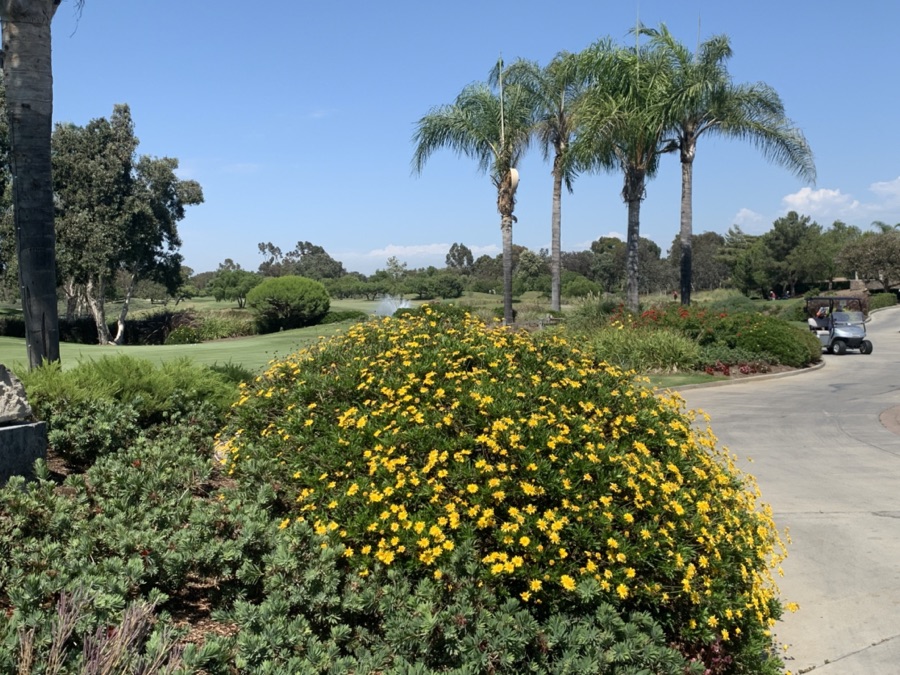 To the golf course to further embarrass me!

On the first hole, Charlotte put the ball right on the green and parred the hole.  What would I expect, after all, she is the woman’s club champion.  She said to me, “Paul, the pandemic has some good points!  Since there are no tournaments, I am keeping my reserved parking place, and my name will be on the trophy for almost two years!”.  We both laughed. 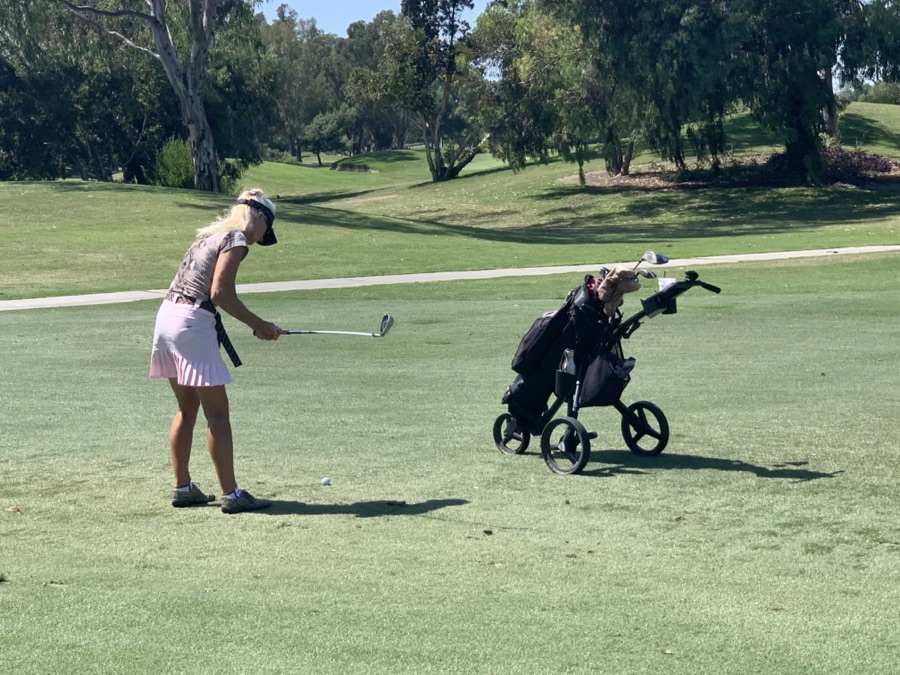 A mighty stroke and the ball leaps into the air, afraid to come down!

Me on the other, I live dangerously.  I seriously contemplated how to make this shot considering the ball was teetering on the edge of a 500-foot precipice.  I decided to use a “foot wedge,” which was an outstanding choice of weapon in a condition like this presented itself. 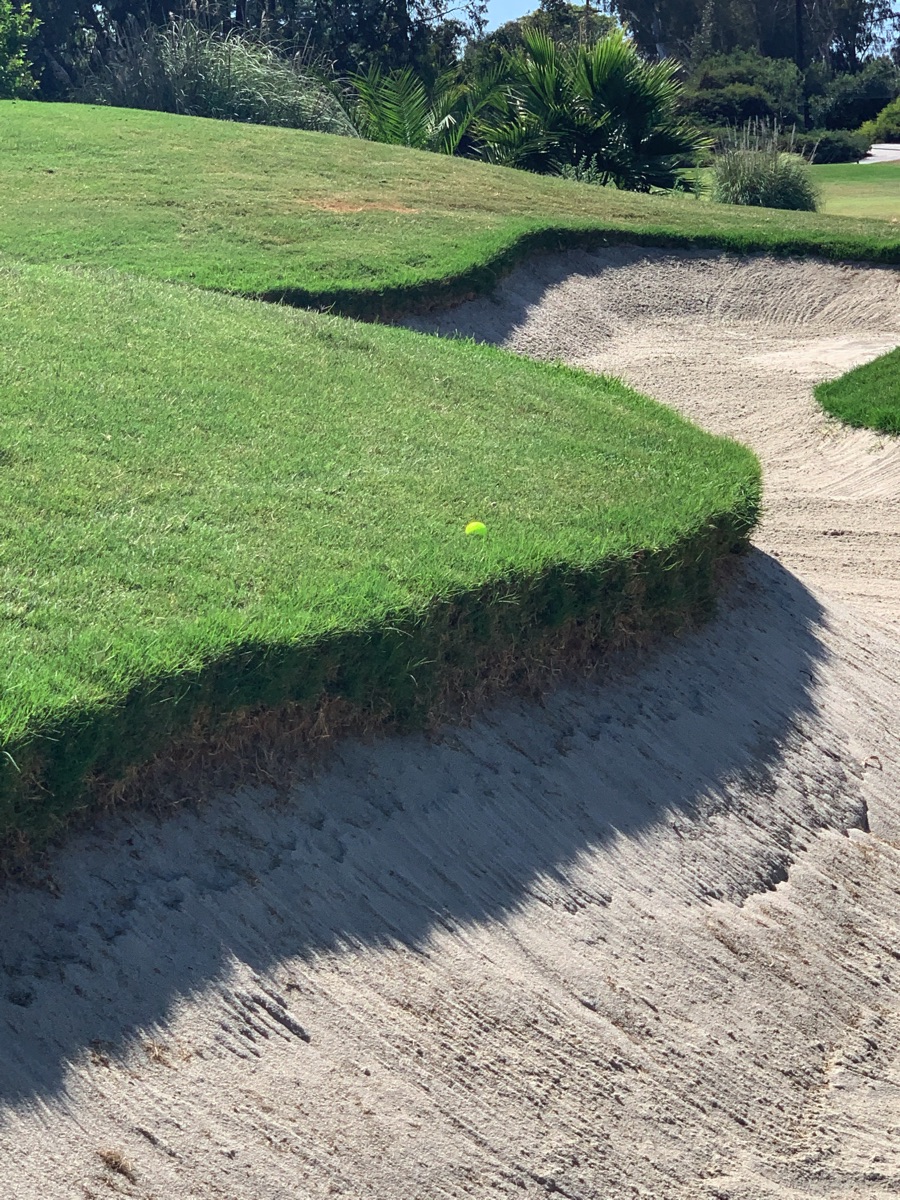 Why am I always on the ragged edge?

On four, Charlotte again demonstrated how she could rotate around 720 degrees.  It was a mighty stroke with me, hearing a faint, “Help, she hit me again!”  I think the poor ball was in pain.  Me, on the other hand, after my turn at bat, I heard, “Oh, it’s you again.  Stop putting me in the rough!” 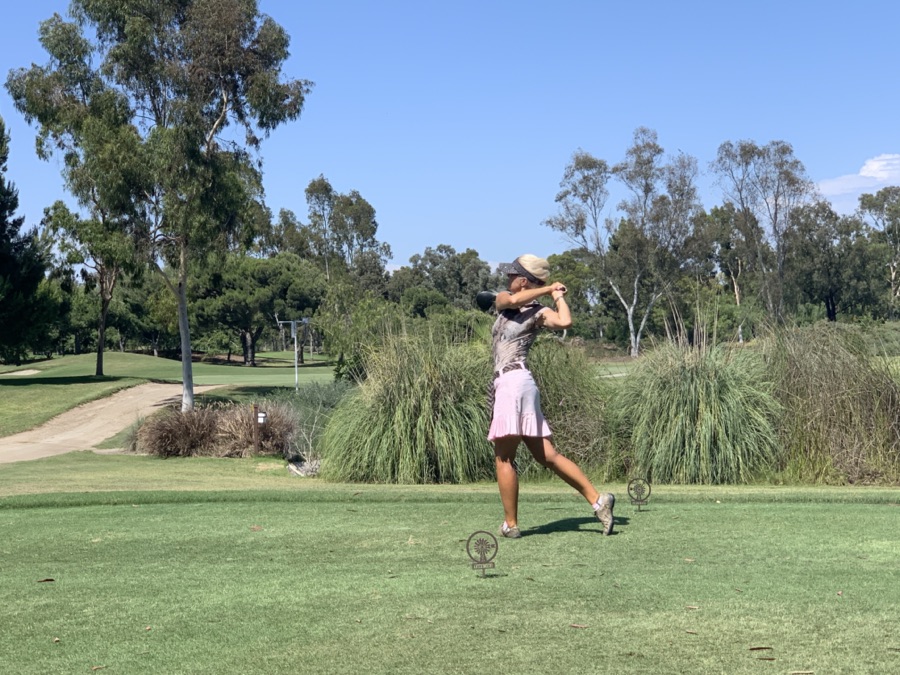 On nine, and that’s all we did today, Charlotte met Mommy Duck and her two teenagers.  I told Charlotte about not feeding the ducks bread (because of Angle Wing Disease), and now Charlotte carries vitamin-fortified premium duck food.

Did You Know? Angelwing, also known as airplane wing, slipped wing, crooked wing, and drooped wing, is a syndrome that affects primarily aquatic birds, such as geese and ducks. It is a condition in which the last joint of the wing is twisted with the wing feathers pointing out laterally, instead of lying against the body. Males develop it more frequently than females. It has also been reported in goshawks, bustard chicks, and psittacine birds (budgerigars, macaws, and conures).

The syndrome is acquired in young birds. Due to a high-calorie diet, especially one high in proteins and low in vitamin D, vitamin E, and manganese, one or both carpus (wrist) joints are retarded in their development relative to the rest of the wing. The result is a wrist that is twisted outwards and unable to perform its usual function. Angelwing symptoms include stripped remiges (flight feathers) in the wrist area, or remiges protruding from wings at odd angles. In extreme cases, the stripped feathers may resemble sickly blue straws protruding from wings.

In adult birds, the disease is incurable and usually leads to an early death, as affected birds are rendered effectively or flightless. In young birds, wrapping the wing and binding it against the bird’s flank, together with feeding the bird a more nutritionally balanced diet, can reverse the damage.

Ducks enjoy many different types of fruits, including berries, melon, seed, and pit fruits. Grapes, bananas, plums, watermelon, pears, and peaches are all fine for ducks. 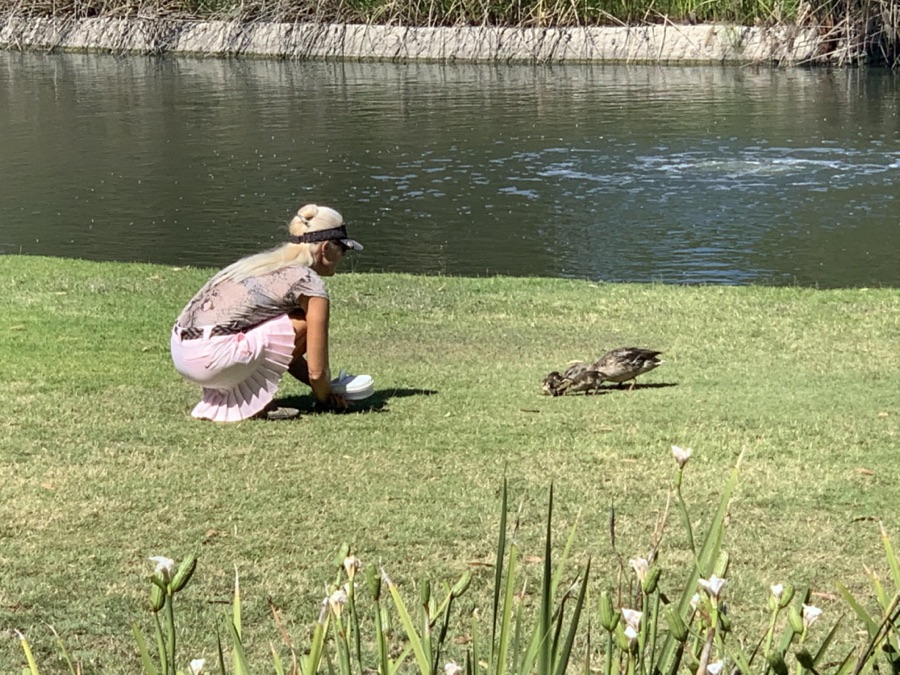 I returned home about 5:30 PM, just in time to shower, change, and head for Joe and Amy’s for the Saturday Night Movie in the driveway!

Before leaving for Joe’s, I called Colleen as this morning she was out, so I missed my “Colleen Fix.”  Jax is still awaiting the arrival of my fifth great-grandbaby, which will be between now and the 17th!

Amy told me that if I wanted, bring a lite dessert.  Well, silly me, I forgot, and I brought a heavy dessert, a forty-pound watermelon!  It was pretty good.

Arriving on the scene, I thought my grandsons had a new pet.  Lucy, the Duck, was walking around, quacking up a storm. She was not the least bit shy.  Joe remembers me talking about angel wing and fed Lucy cracked corn and oats.  She was a happy girl! 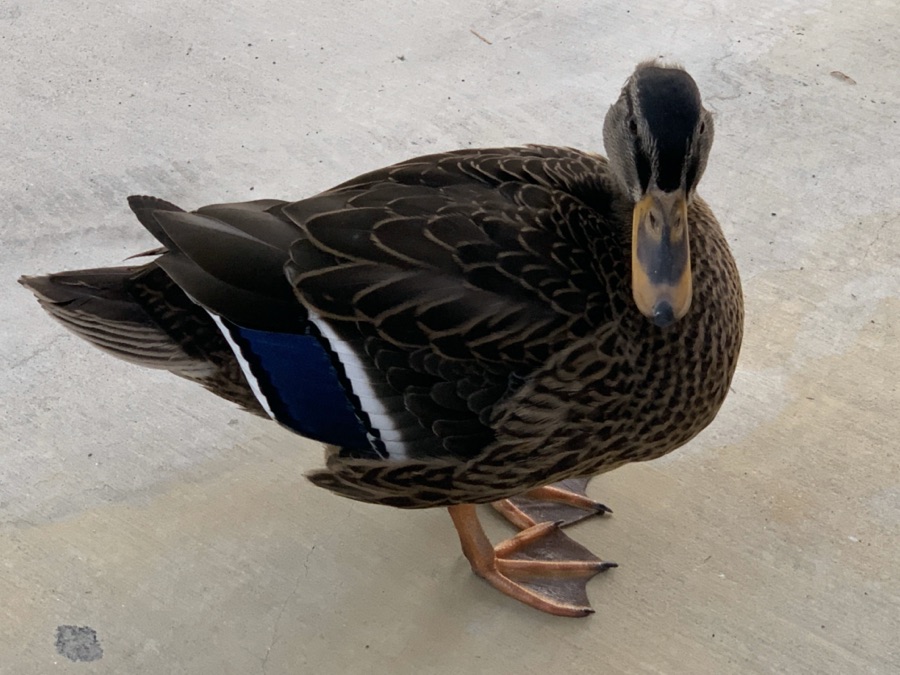 It’s about time for the movie, so we all dived into the desserts, set up the screen, and watched “My Spy.”  The film is quite entertaining. Joe and Amy are just incredible; I am blessed to have them in my life. 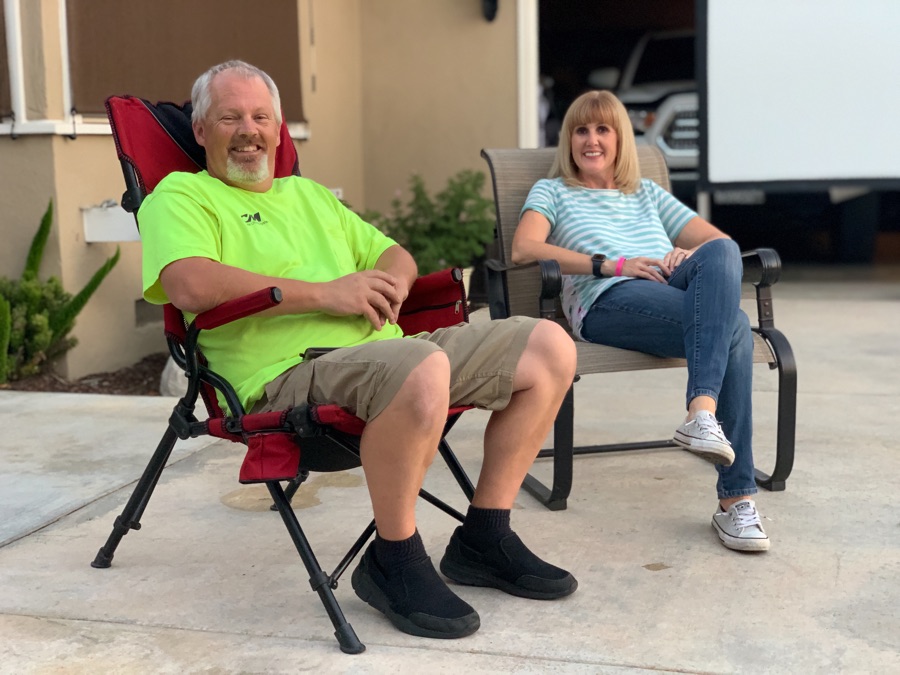 Ready for the show to begin.

I had front row seats! 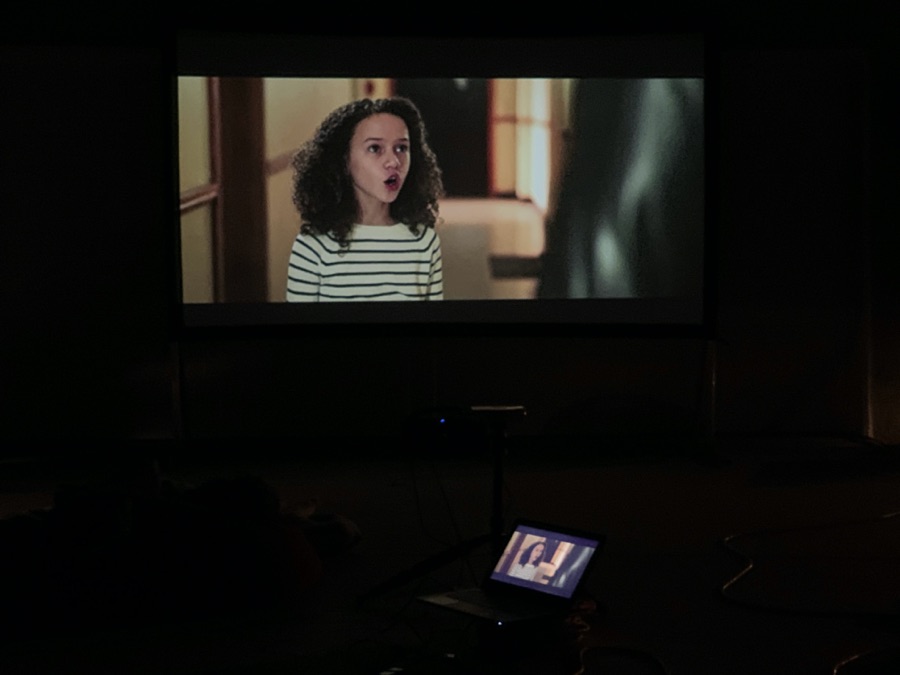 The second time I saw the movie in the past two weeks, and it was great!  Everyone wondered why I started laughter AHEAD of the funny scenes… I knew what was coming.

Bob worked until 10:15 PM as I saw his progress on my security systems.  When I got home, the bathroom had the counter and top installed.  That hunk of granite is massive, and he got it inside by himself.  The surface was polished, and the sink cutouts were wade, and the porcelain sink was attached.  Tomorrow the water hookups and we will be 99% there! 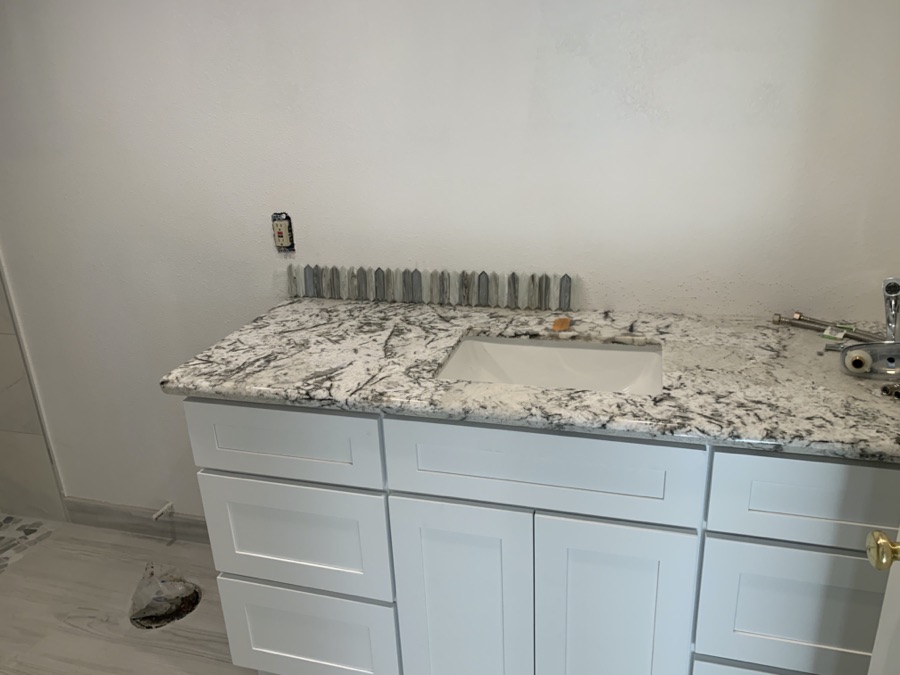 The counter is in place and ready for the faucets. The mirrors and wall cabinet will also come in Tuesday. On Tuesday.

The backsplash is not yet installed; it looks like Bob made have an idea to present?  We will see.  I have selected some artwork for the wall, and I have a chrome towel rack under consideration. 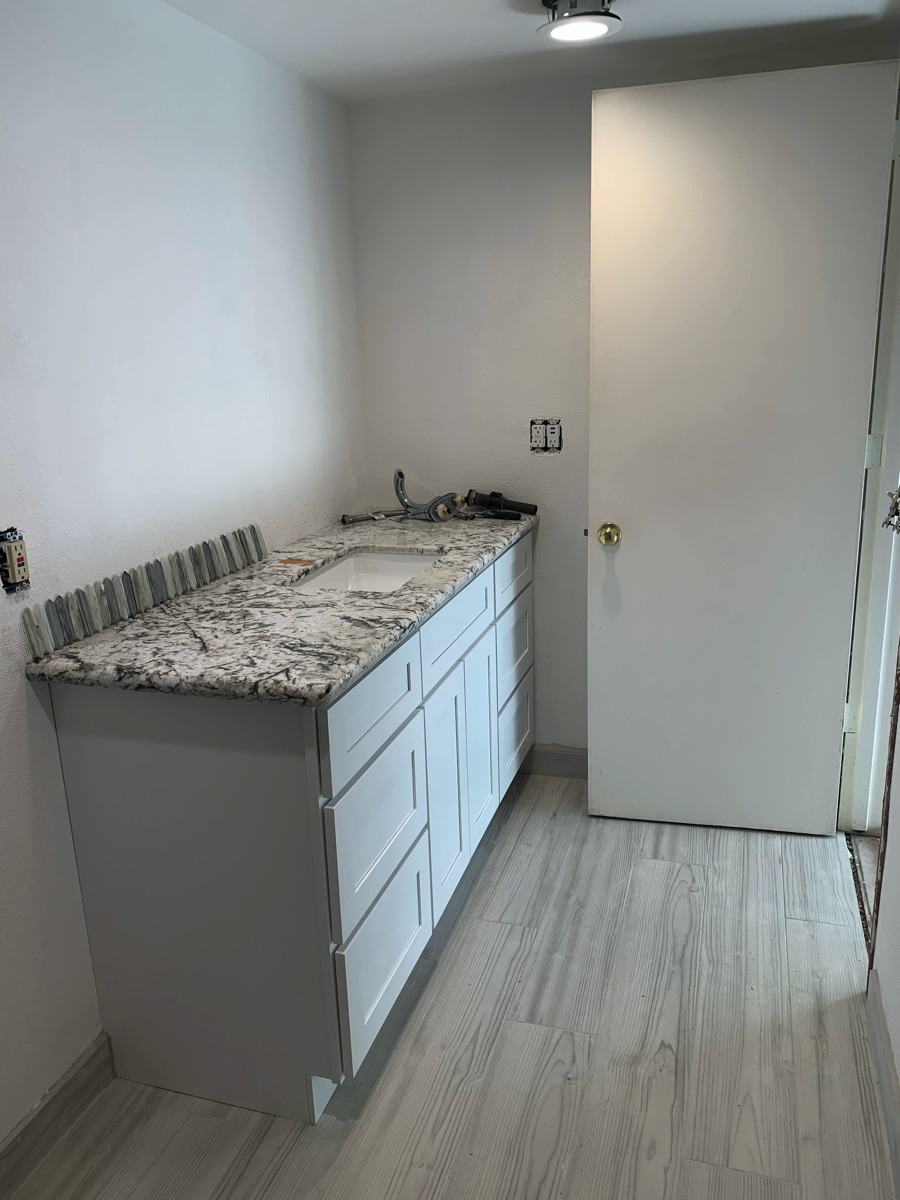 I locked up and crashed at about 11:30 PM.  I watched a little bit of TV, but I think I likely slept through the show so I will repeat it tomorrow.  My last thought of the evening was of my bride and our trip to Catalina on her birthday seven years ago! 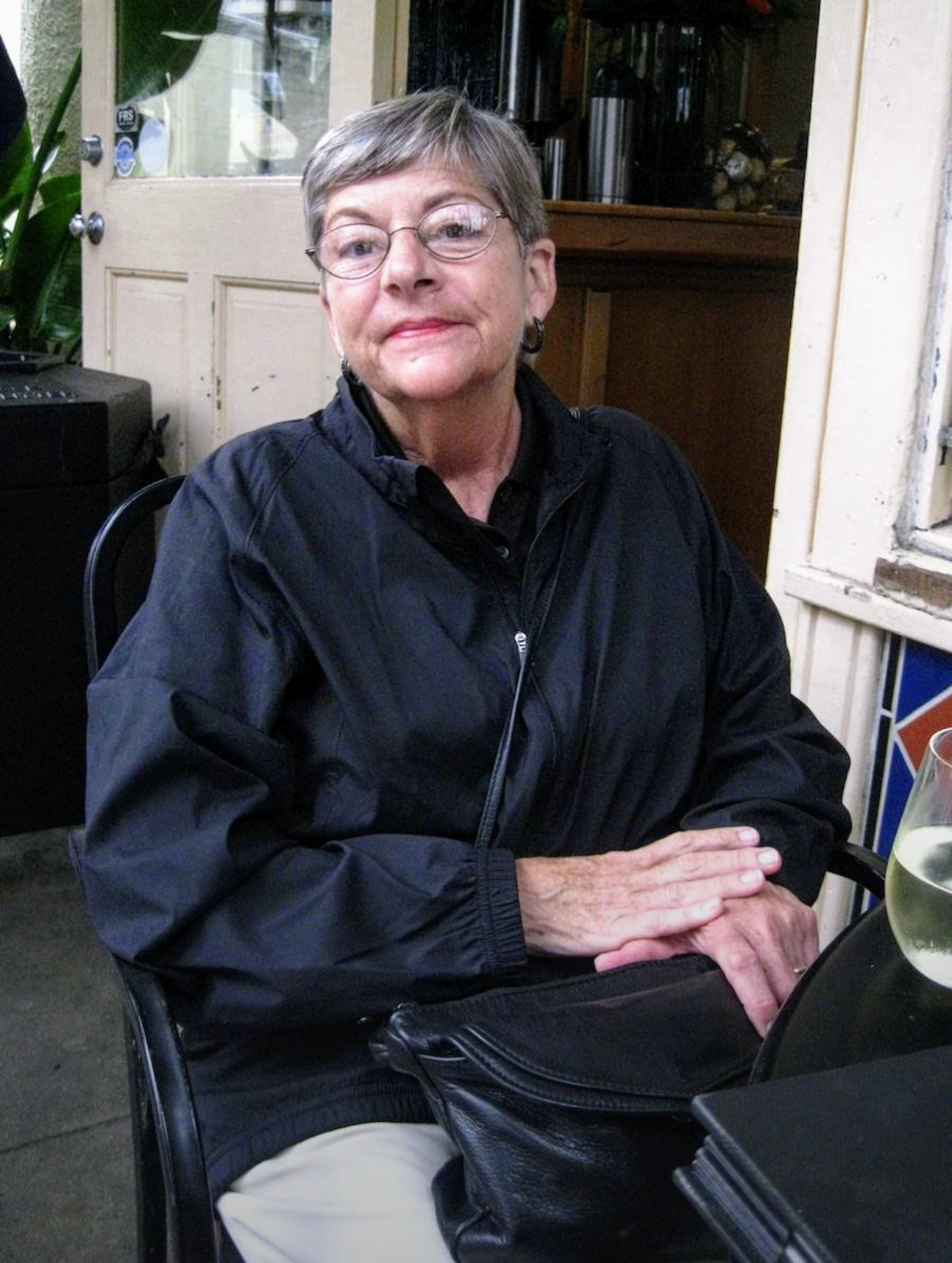 Happy birthday to my Sweet Sue, July 2013, in Catalina.

Just an old retired guy trying to finish out my last years on this planet loving my best friend and wife, having fun, learning, and passing on helpful things to others.
View all posts by Paul →
This entry was posted in Family, Food and Wine, Golf, Working Around House. Bookmark the permalink.
Powered by Maribol IMDB Plugin