We headed north to Alaska…. No just kidding… North to Saratoga to visit the Porters and have dinner.  It’s always great to see them and catch up!

Saratoga  is a city in Santa Clara County, California, USA. It is located on the west side of the Santa Clara Valley, directly west of San Jose, in the San Francisco Bay Area. The population was 29,926 at the 2010 census. Located on the Western edge of the Silicon Valley, Saratoga is known locally for its suburban small-town feel, wineries, and high-end boutiques. In 2008 CNN/Money ranked Saratoga number 4 in its listing of top-earning towns.[Saratoga also was ranked by Forbes in 2009 as one of America’s top 20 most-educated small towns. In 2010 Bloomberg Businessweek named Saratoga the most expensive suburb in California. Bloomberg Businessweek also named Saratoga’s zip code 95070 the 18th richest zip code in America in 2011.

In the early 1950s, animator and future Gumby creator Art Clokey produced stop motion commercials for Pea Soup Andersen’s. In 2012 it was noted that the restaurant sold 500 to 600 gallons of pea soup in a day. 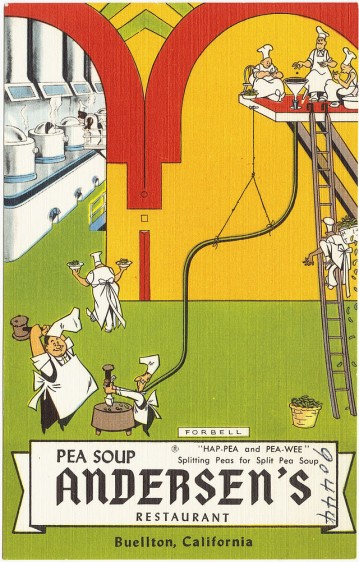 The original Andersen’s restaurant was founded in 1924 by Anton Andersen and his wife Juliette. Anton Andersen was born in Denmark and had received training in the restaurant business in Europe and New York City. Juliette was born in France. Anton and Juliette purchased property in the small town of Buellton, California, in Santa Barbara County. Buellton and neighboring Solvang were the focus of a Danish colony of Danish Americans and recent immigrants. They opened a small restaurant and named it “Andersen’s Electric Cafe” in honor of their proudest possession, a new electric stove.

Just an old retired guy trying to finish out my last years on this planet. I lost my best friend and wife in early 2020. I was blessed again by reconnecting with Dr. Mary Côté, a long-time friend. Mary and I got married July 28th, 2021, and are enjoying life together and plan to spend the rest of our lives being a blessing to our friends and family.
View all posts by Paul →
This entry was posted in Family, Food and Wine and tagged Dining Out, Family, Road Trip. Bookmark the permalink.