Fact: John Hancock was the first person to sign the Declaration of Independence.  Likely because he was the President of Congress at the time, he signed in a large hand and at the center of the document, according to the National Archives.  His bold signature is where we get the phrase “put your John Hancock” when referring to signing your name.

Into the Swim Spa, we went at 6:15 AM.  The hood was quiet as a church, and only the occasional bird flying over disturbed the silence.  We knocked back our coffee and discussed the day’s plans.  Coffee helps me maintain my “never killed anyone” streak.

I watered the lawn most of the day so we could keep part of it from dying because of construction. 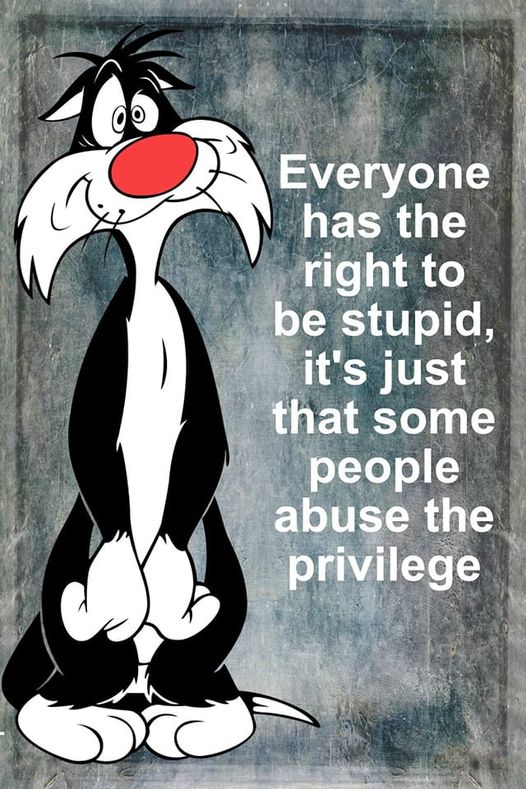 We had a few errands to run, so we started at Jan’s.   On our way out, a man came to the door and asked if we had lost a small white dog.  We went to his car, where his wife was holding this cute baby, and we did not recognize him.  We drove around the block for almost 20 minutes, looking for someone who may have lost a dog.  We talked to several neighbors, but alas, no luck.

We sat with Jan for an hour and just discussed the events of the world plus we got to talk to Vicky! 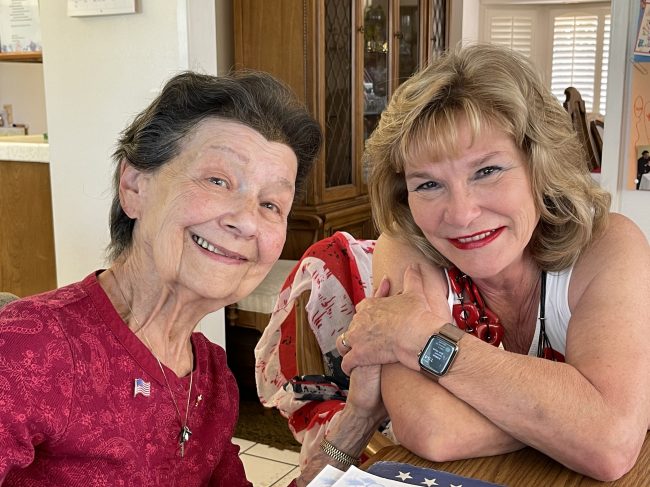 Our first outing of the day was visiting Jan and bringing her wine and some edible goodies.

We needed corn and to take some things back to Dianne, so Manassero Farms was a mandatory stop.

Did You Know?  The Original Manassero Farms is celebrating over 97 years of three generations of family farming in Orange County.  The farm has become one of Orange County’s best certified organic and conventional farms with four Orange County locations. 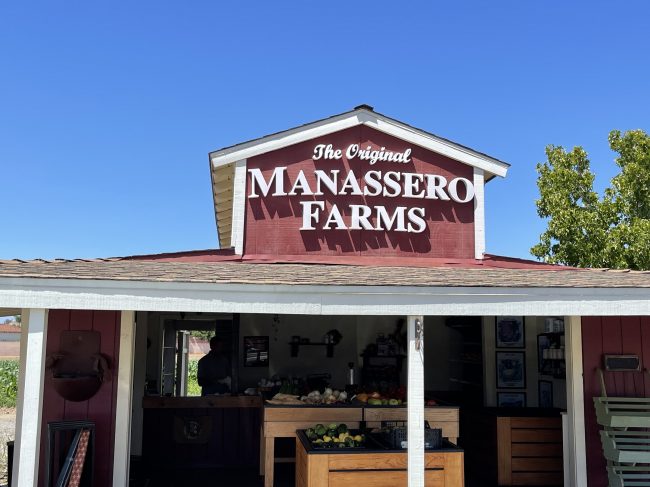 We stopped at the local farm and got a bunch of corn on the cob.

We did our delivery to Dianne and David and visited for a few minutes before heading back to Casa Valencia.

Mary got her cookin’ bug and fixed an excellent early dinner.  Corned beef and cabbage (our own cabbage from Casa Valencia Farms).  The cabbage was delicious. 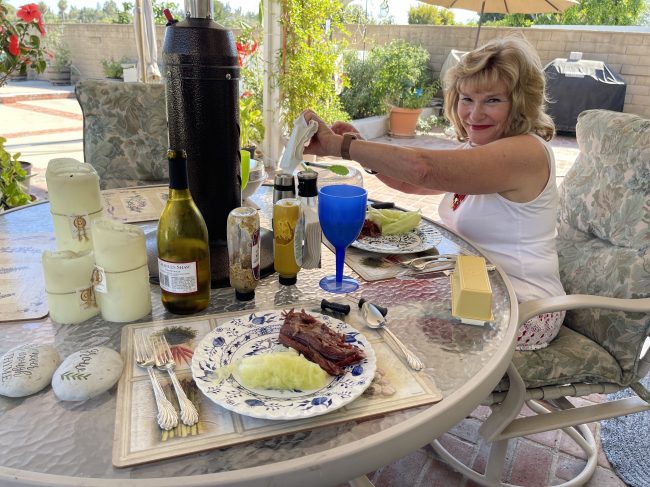 Dinner was terrific, and you would think it was St. Patrick; ‘s day at the Liles’

With a little Mustard Dijon, the corned beef was better than a steak!

Did You Know?  Dijon mustard (French: Moutarde de Dijon) is the traditional mustard of France, named after the town of Dijon in Burgundy, France, which was the center of mustard making in the late Middle Ages and was granted exclusive rights in France in the 17th century.  First used in 1336 for the table of King Philip VI, it became popular in 1856, when Jean Naigeon of Dijon replaced the usual ingredient of vinegar in the recipe with verjuice, the acidic juice of unripe grapes 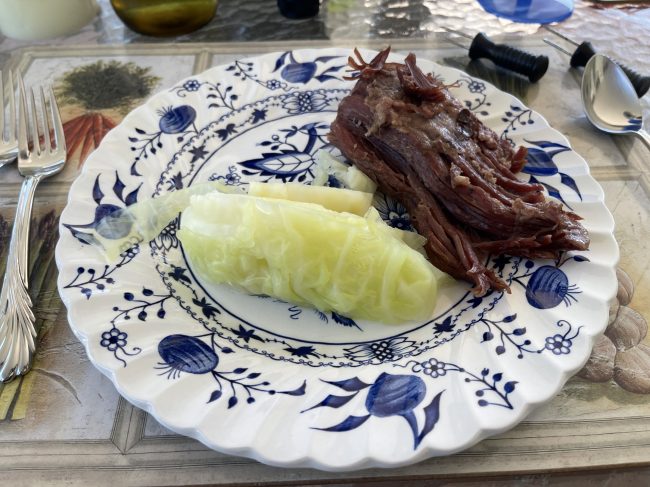 Mary made twice-baked potatoes; to die for!

The corn came, and after we had our first piece, Dr. Scout, The Wonder Dog, got his sniffer in gear.  We offered him to nibble on the cob and the little devil did his version of the typewriter thing. 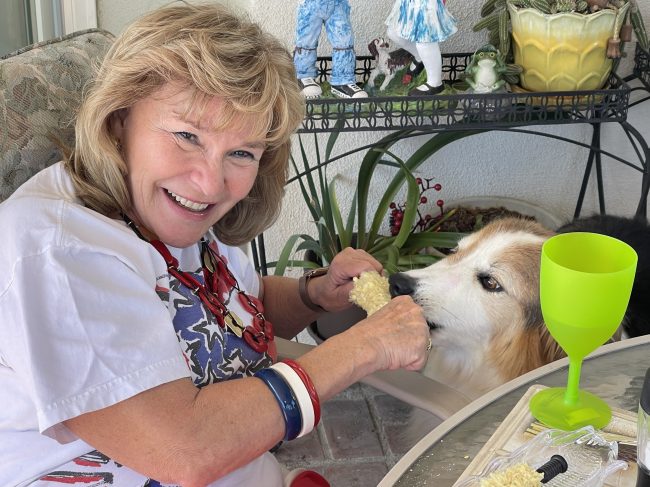 Guess who likes corn on the cobb?

He quickly mastered the “pull back the lip and chomp with front teeth” move.  We laughed ourselves silly. 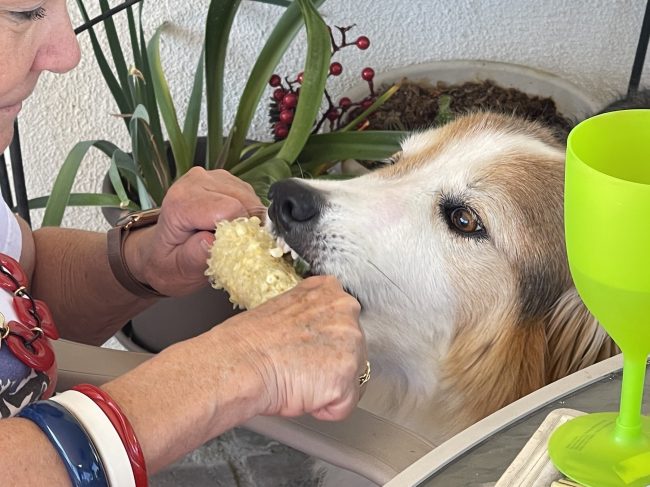 Look at his teeth!

The movie camera had to come out.

The rest of the evening was spent watching movies while Mary ironed my 4th of July shirts.

We went to bed at 9:00 PM and Scout was going wild with the sound of fireworks.  We finally made him jump in bed with us and we spent an hour rubbing him and calming him.  By 10:30 PM we were knocked out and finally, we got some sleep!